The sun was shining, the heifers were gorgeous and were coming as I called them, from the House paddock, along to Flat 2. 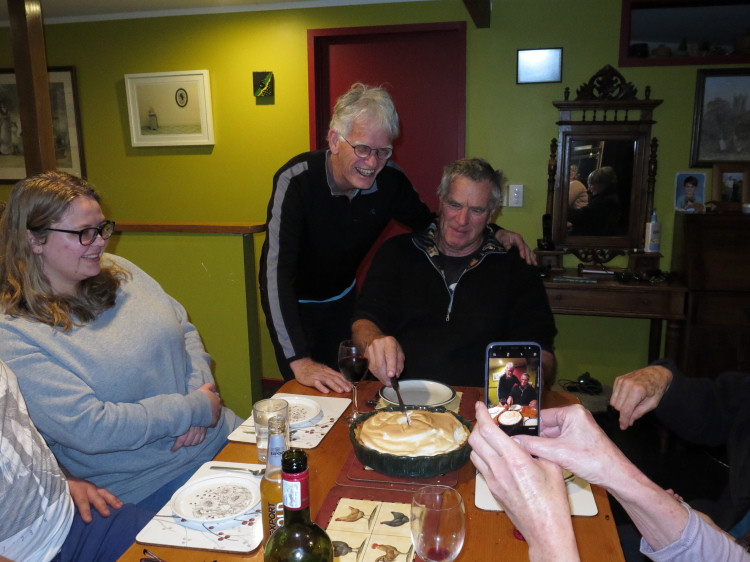 We had a dinner party!  Elizabeth and friends Anne and John, have been talking about coming out for a meal for a few weeks and tonight was the night.

Anne suggested these two looked like they were cutting their wedding cake, so I thought I'd catch the moment too. 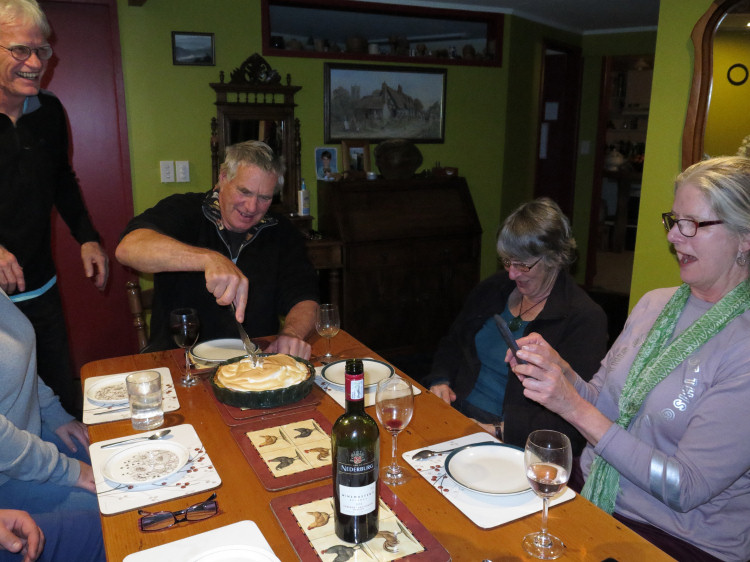 At left but out of view in this picture are Dylan and his partner Shayna, who were up for the weekend to stay with grandmother Elizabeth.

We both went for a wander in the bush between the stream and the road, where the big Pine tree was felled.  I have lately discovered that we are not the only people who go into that bush and I'm not very happy about it, since it is actually part of our farm, not part of the public road area.  I would prefer to know when people are in there, since it's very near where I wander around presuming myself alone.  Perhaps we'll have to make some signs. 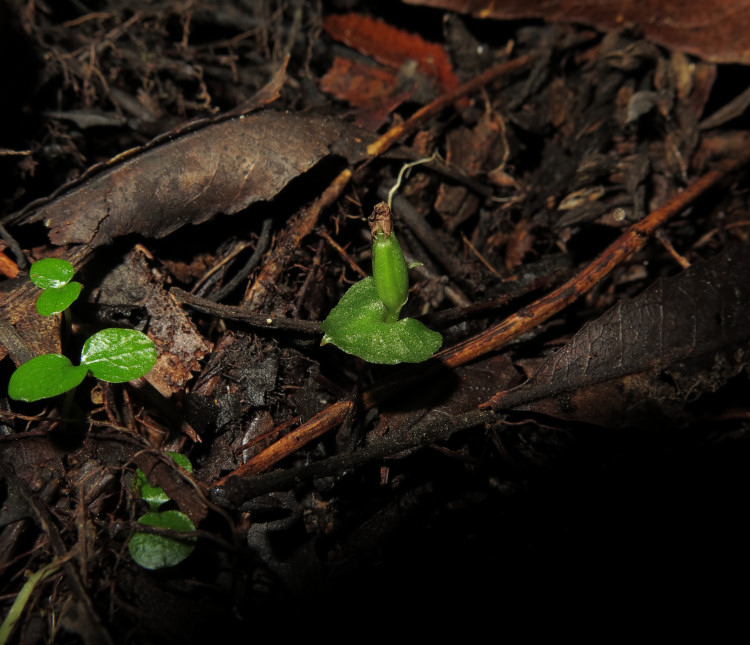 Stephan took a pruning saw and herbicide to paint on weed-tree stumps and a bucket to pick up rubbish - lots of bottles get thrown from the road down toward the stream, along with all sorts of other litter people could so easily transport home to their own bins.

I went to look for orchids, of course.

This little plant was somewhere I hadn't particularly looked before, just down the bank from where I often see a few Anzybas rotundifolius plants and I almost didn't photograph this and one just adjacent but went back to do so to remind me of where they were for next year.  But on looking at the photographs now, I think this might well be Corybas cheesemanii, which I've only seen before out in the Bush Flat reserve.  That's pretty exciting! 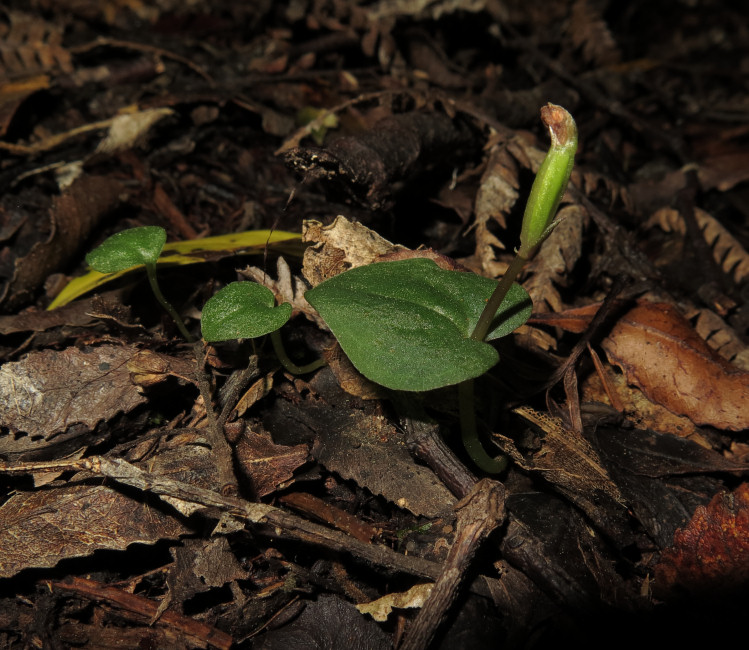 This is Anzybas rotundifolius, which I saw in flower six weeks ago.  (Actually the same plants, which is extraordinary, since they're not marked and there isn't a track!)

In regard to other people accessing this area, my second major concern is that I fear they might carelessly walk on any of these tiny plants, since most people don't even notice them beneath their feet.  I walk with my eyes continually trained on the ground, looking for the tiny green leaves.  It's not unlike looking for green peas on the ground amongst other small green leaves. 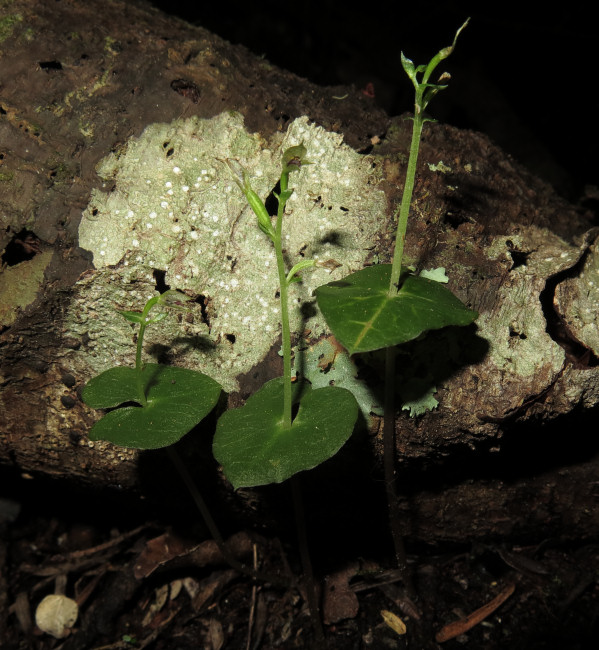 Acianthus sinclairii are all over the place as usual - not thick on the ground, but growing in many places around this area, far more commonly than the other two species, of which there are only a handful of plants. 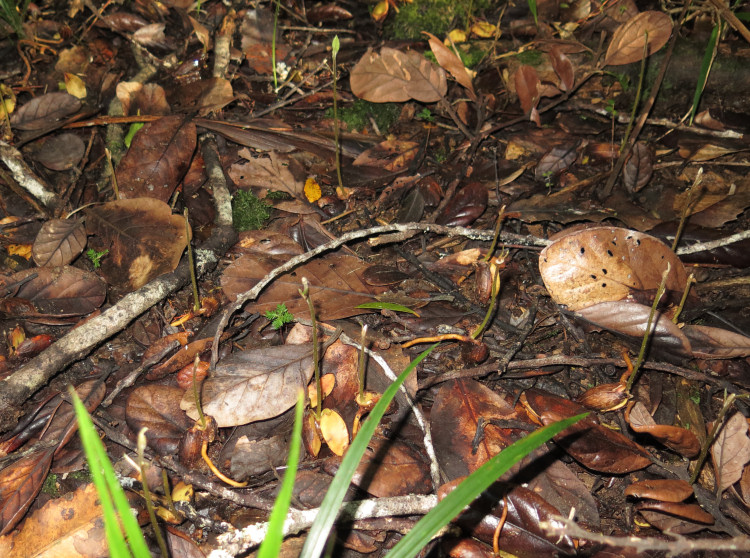 Taraire seeds are germinating everywhere, where they've been dropped by birds or as shown here, beneath their parent trees.

I carefully picked up any that had not yet rooted themselves to the ground and carried them home.  It's a wet and unpleasant-feeling task, because of the jelly the seeds exude before they germinate, which allows them to remain where they fall on steep slopes, sticking them to the ground so they don't roll away. 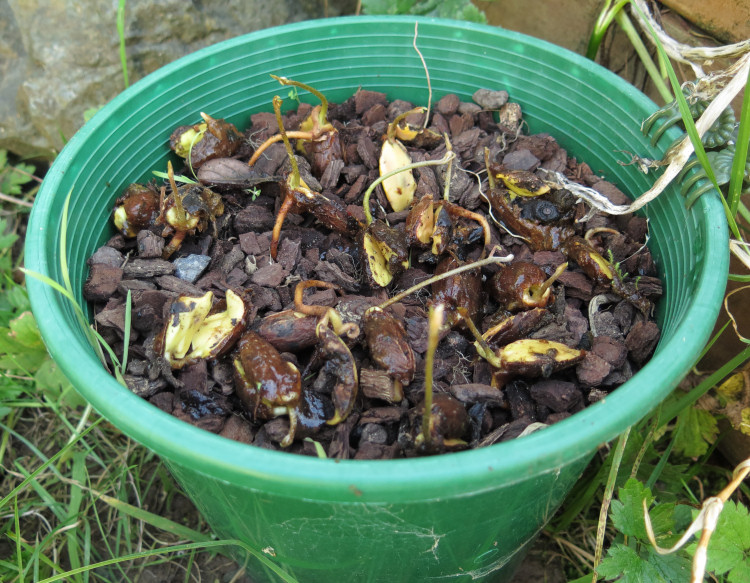 I placed them all the same way they'd begun to grow, in a spare pot from the greenhouse and put them outside in a shady place. 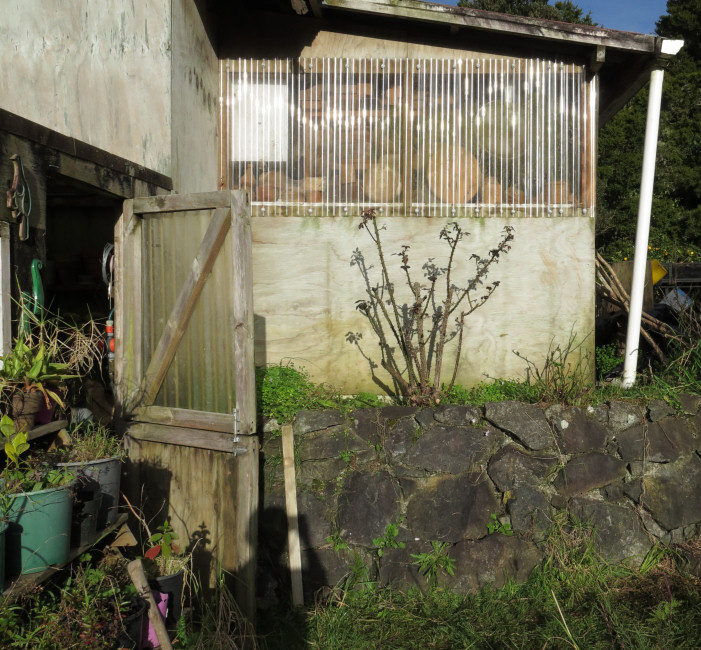 We decided we'd do some more pruning, since the weather was so lovely.

This is my Elina rose, the hugely vigorous and really very vicious plant it would be hard for anyone to kill.  It survives with very little care, other than the need for annual pruning, which I have failed to do for the last two years and the thing had become as big as a tree, working its way up under the eaves of the shed.

Sometime in the last couple of weeks, Stephan did some initial pruning for me with the big loppers, making it a little less dangerous to approach today, which I did with care and the long loppers again before daring to approach with ordinary secateurs.  I hope I wasn't too hard on it but I suspect it will regrow extremely vigorously and flower again in six weeks. 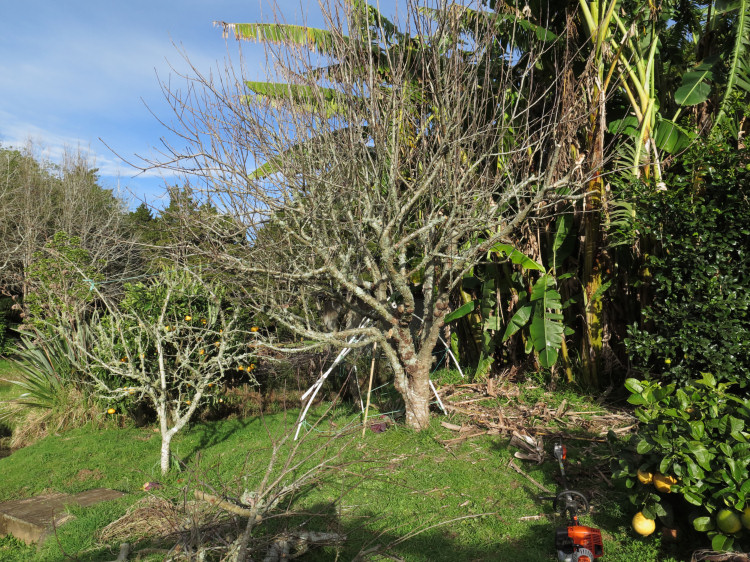 Then we carried on with the apple trees by the pond.  The Sebastian apple tree is a terrible mess, so we conferred on which bits of it to remove and then had another look each time before lopping a bit more out. 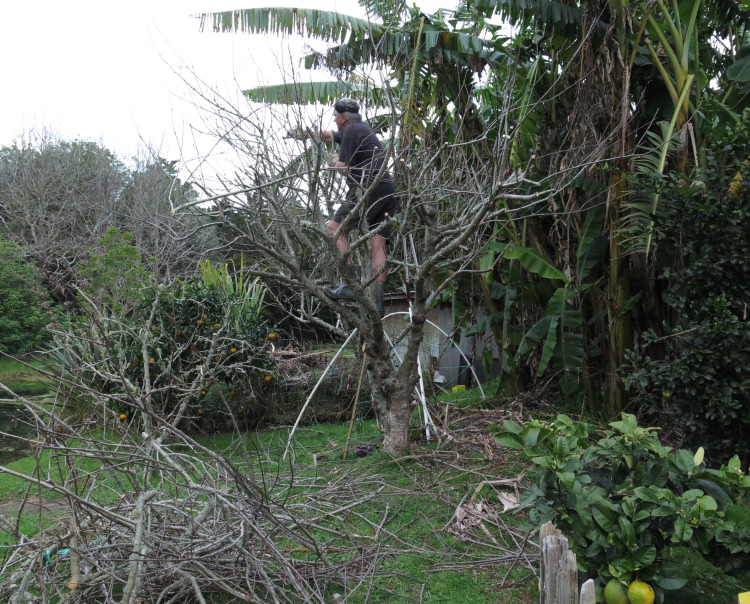 While Stephan worked on that tree, I tidied up the three-variety apple by the jetty.  That tree doesn't seem to be doing very well but hopefully some pruning might spur it into life again this year.

I then took quite a bit of criss-crossing foliage out of the biggest Feijoa and lightly pruned the other.  Any quantity of fruit this season will tell me whether I did a good job or not.

Those enormous banana plants in the background have already provided us with two lovely big bunches of fruit this season.  I had never before realised how productive they could be.  The recent bananas have been a lot bigger than the early ones we had. 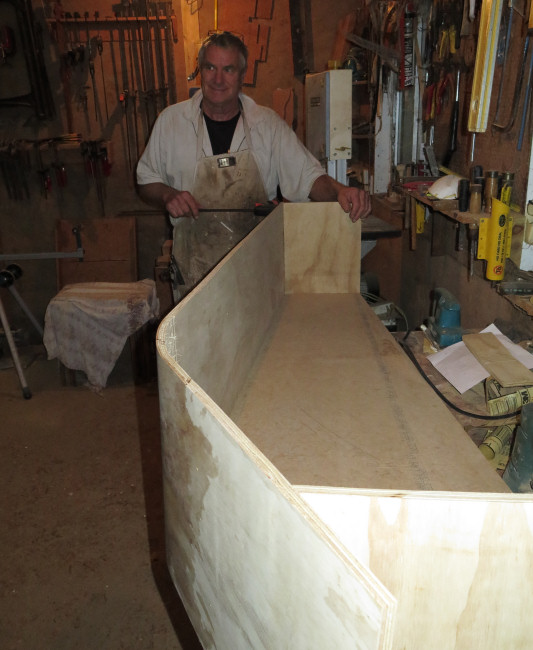 Worry not, nobody has died.

It is better to have a coffin ready than to have to make one in a hurry when somebody has already died.  Having made Dan's beautiful box out of milled pine last year, Stephan wanted to see how a plywood coffin would turn out. 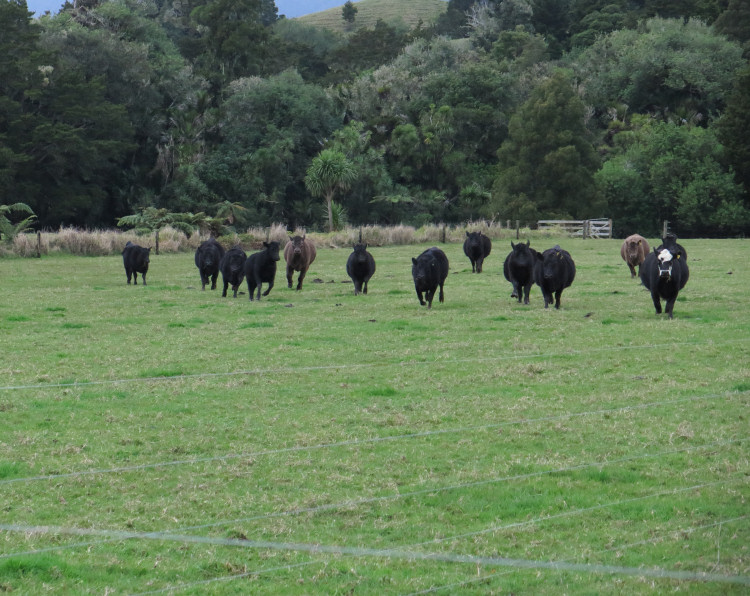 We took a bale of hay on the back of the ute, to share out amongst the heifers, Zella and Demelza and the bulls.  The heifers could see what we were up to and came running. 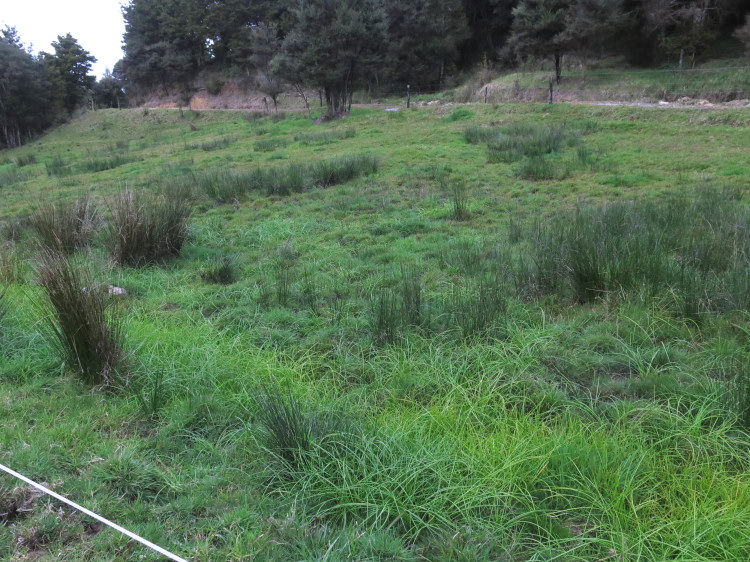 There are some unfamiliar rushes growing in the drains in the Blackberry paddock, where I've excluded the cows from grazing for the last several weeks.  I'll have to go and have a close look at them when they're more mature and see if I can figure out what they are. 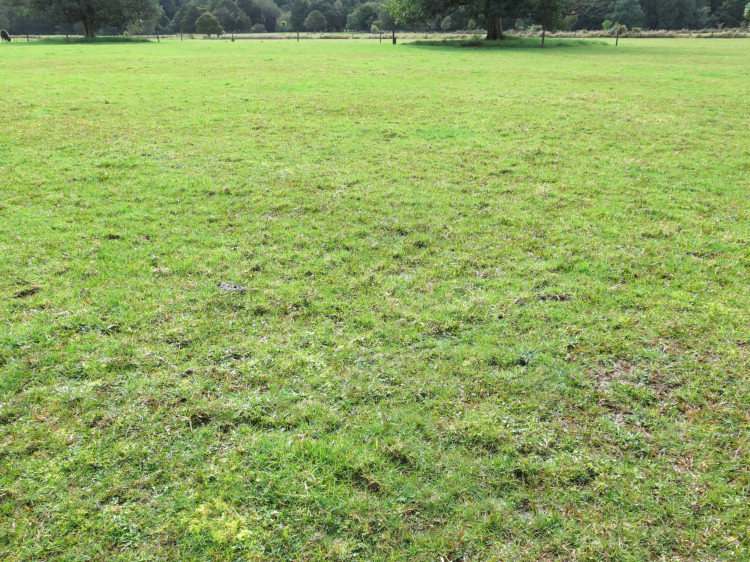 Today was really cold, all day, with showers and squalls and the temperature didn't make it over 10°C.  Horrible.

This is a bit depressing: the bottom end of Flat 3 looks no better than ever, despite fertiliser and several applications of lime.  I haven't figured out what I'll do about this yet.  It's no good if the fertile flats can't grow good grass.  There's still lots of moss, as if there's not been lime here at all and yet I know there has. 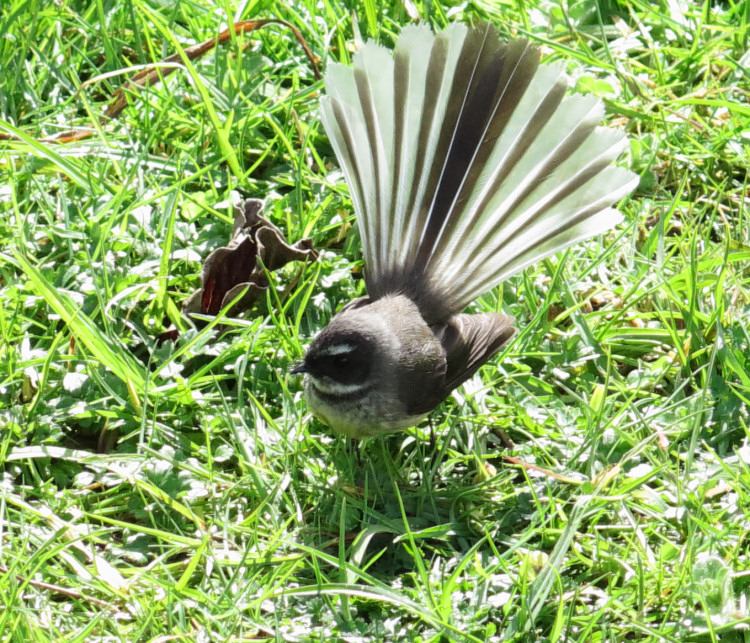 As I walked from the pond through the garden gate, this little flitting bird passed me and alighted on something before me, then flitted away and around again, catching any tiny insect my footsteps disturbed into flight. 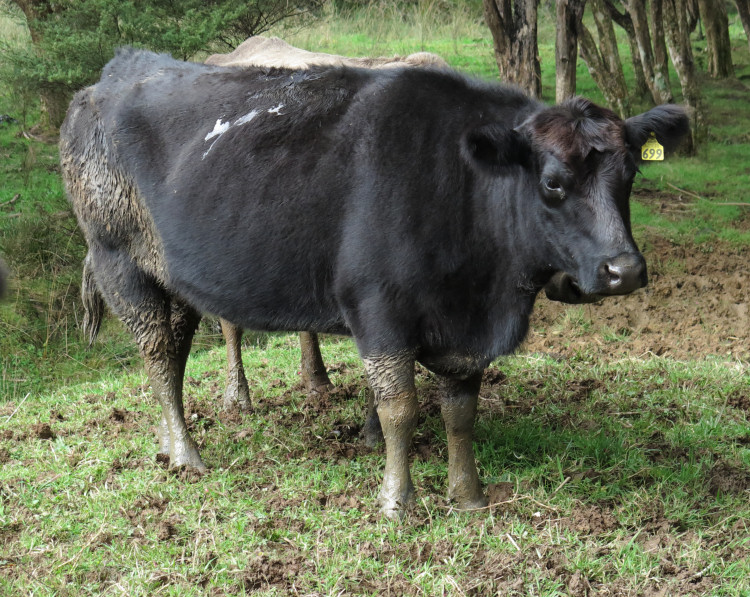 Definitely not in calf then, eh Meg?  Not with that clear slippery mucous present - that's what has dried on her side, flicked there by her own tail.

I wonder what happened?  I am fairly sure she was in calf before the cull cows went off to the works.  I think there might have been a little extra vulval mucous present at one point since then, which I don't appear to have recorded in my notebook.  I try to write such observations down because you never know when something you didn't see much of, was significantly going on at the time.  And then sometimes I don't record them because more often they mean nothing. 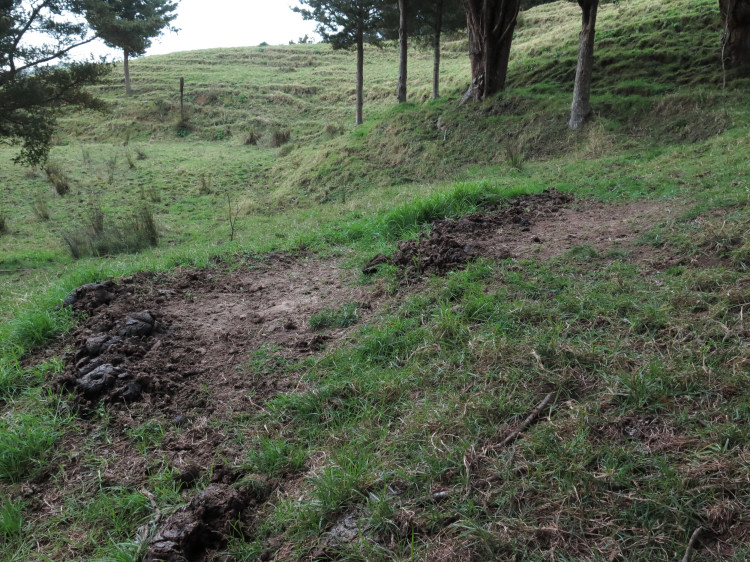 In the lee of one of the big Totara on the hillside Over the Road, I discovered these two bare patches of earth, bordered by ridges of cow manure.  They are obviously regular sleeping places for a couple of animals. 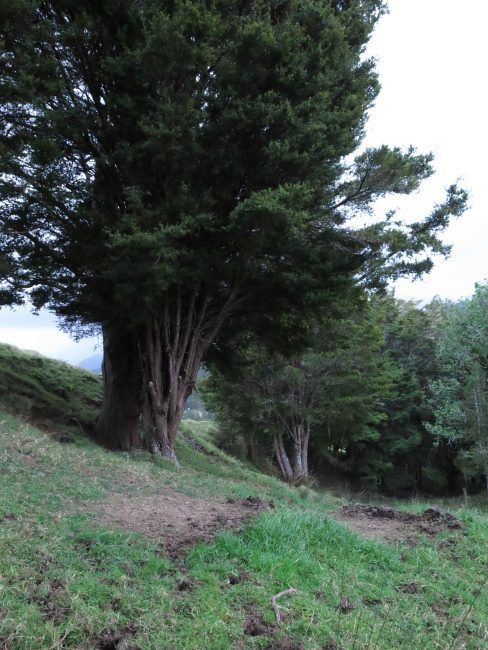 On the north-east side of this tree, they'd be sheltered from most of the rain and, tucked down below the brow of the hill beyond, also reasonably sheltered from the wind.

Interestingly this week there has been comment from a government minister about welfare concerns for cattle either in intensive stand-off situations where feed is brought to them, or on winter crops where an electric tape allows the animals a narrow strip of new grazing each day across a wide paddock and the cattle stand for much of the rest of the time in often knee-deep mud, with nowhere dry to lie down.  Cattle need to lie down for some parts of their day, like the rest of us.  I offer the evidence of these favoured dry places to rest during the winter wetness here.

Southern farms used to have big hedges as shelter for livestock but an industrial approach has led to the clearing of pesky trees that get in the way of men and machines going about their business (as if the animals' comfort is not their business) and animals just have to put up with the cold. 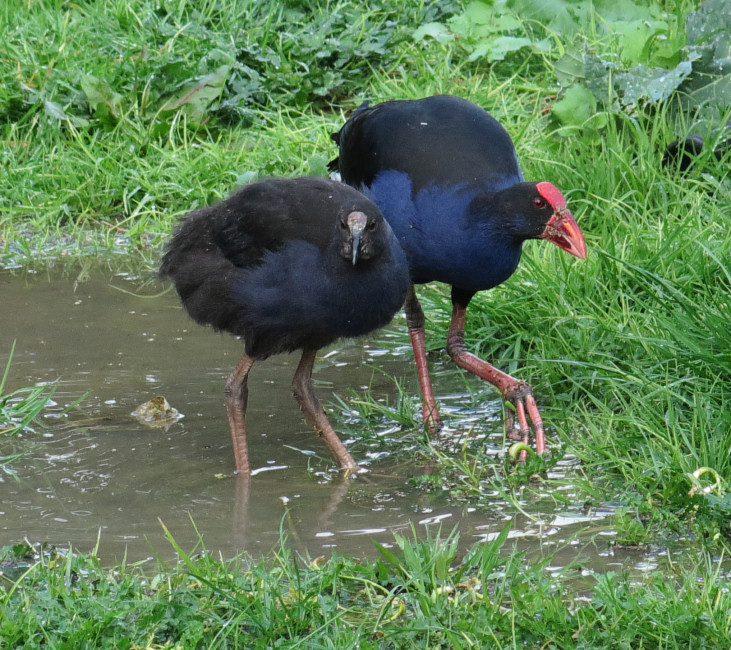 These two continue to turn up to eat whatever they can find on the back lawn, mostly refuse from the aviary. 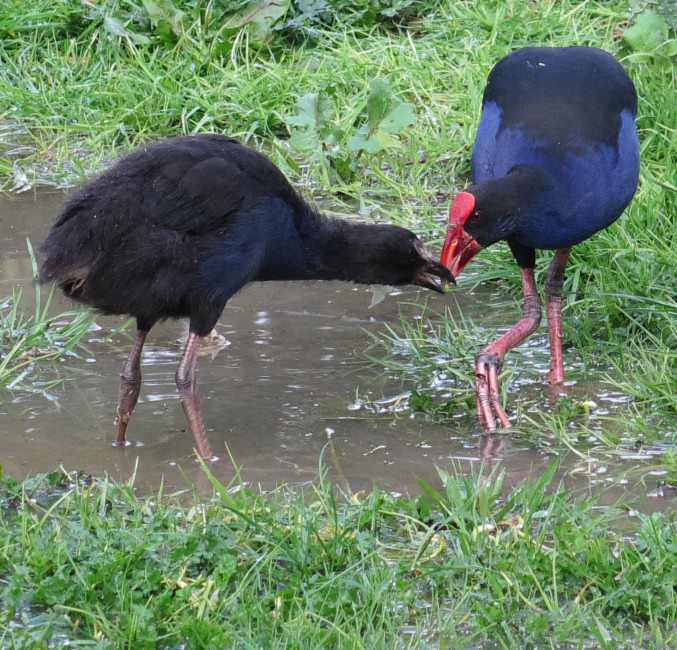 The adult is very probably the older sibling of the chick and s/he is doing a lovely parenting job while the adults are busy with the next chicks.

I really like watching Pukeko; they're such interesting birds. 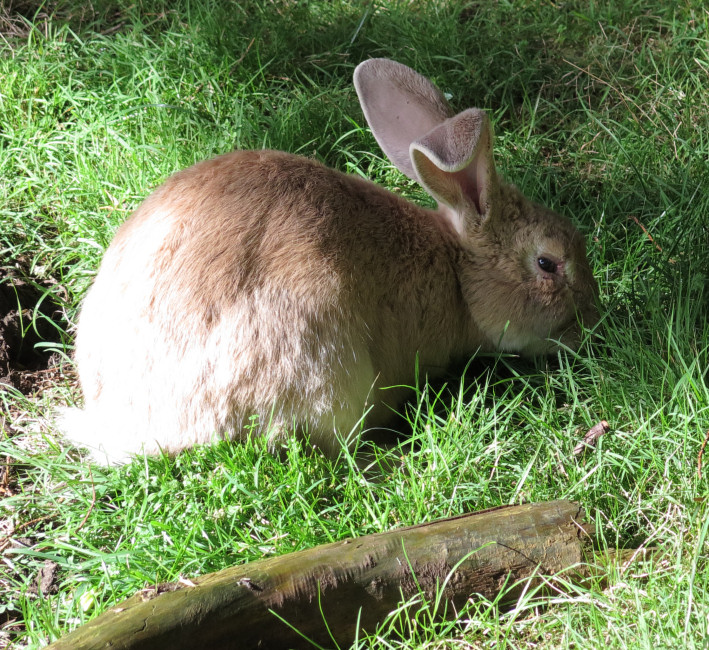 Big rabbit is looking a bit the worse for wear.  It would appear that something may have attacked it - the bent ear and marks around its right eye look suspicious.  It probably doesn't have a long future: Jane is threatening to poison it if we don't respond to her requests to shoot it.  I like it being around but she reckons it's eating her plants.  Can't have that sort of thing happening when you live in the country!

We will see if we can trap it, since apparently someone neighbour Sandi knows, has expressed an interest in rehoming it. 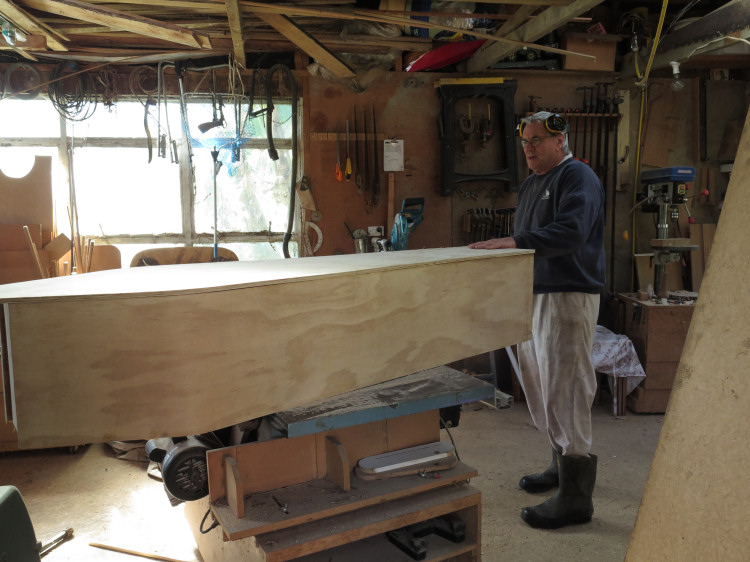 One coffin, nearly finished.  It should probably have handles and it is yet to be lined.  Stephan has purchased some stain to make it look pretty as well.

If your wish was to be cremated without any fuss, you wouldn't need handles or stain; this would be enough - more than enough for some.

There are all sorts of options around now but a sturdy box makes handling easier for anyone beyond the family who needs to deal with the dead.  A proper box is the preference, for instance, of the operator of the nearest crematorium, rather than any less-firm covering or container.

Stephan found the project useful, discovering a few things to be careful about when building in plywood rather than the pine he used last time.  I'm not sure where he intends keeping this large item, until someone needs it! 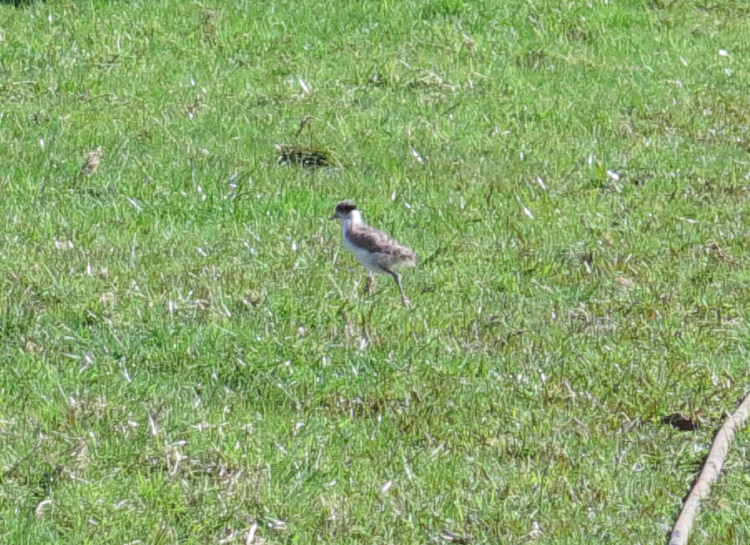 This picture is for Fliss, who wrote to say she'd like to see some follow-up photos of the tiny Plover chicks from a couple of weeks ago.

I hadn't seen the chicks since the last pictures but here were two of them, running across the paddock as I walked up the lane this afternoon.  They wanted to get away from me, so I didn't chase them for a better photo.

I think that at this age they're still covered in down, rather than feathers.