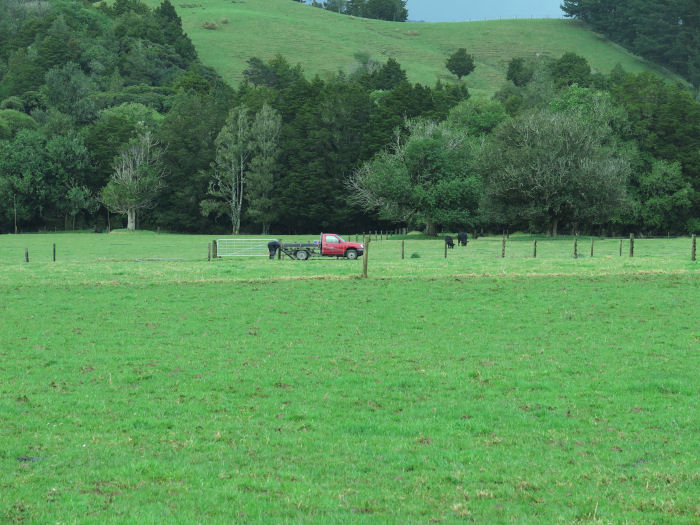 Stephan bought a new gate, meaning to install it up the road, where we keep undoing the fence to put cattle across the road from the Road Flat paddock.  I suggested we put one of the older gates up there and use the nice new one out on the flats, to replace the Flat 2 gate which has long been wildly bent.  (Years ago one of the bulls went over the top of it and despite some attempts at straightening it by running over it with the tractor, it was never the same.) 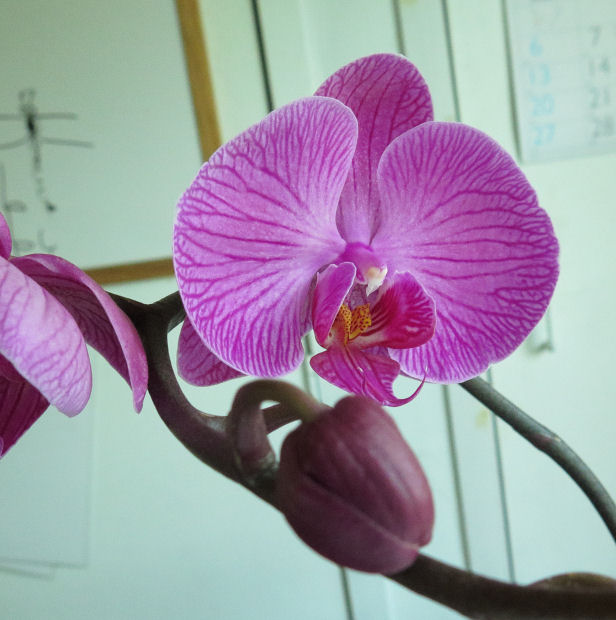 When Jude and family went off on their world trip, a lot of pot plants and trees ended up at our place.  I recognised this orchid plant amongst them, fortunately, repotted it and kept it with the big white orchids.

I've been watching its flower buds develop for weeks, waiting to see what glorious colour it was going to be. 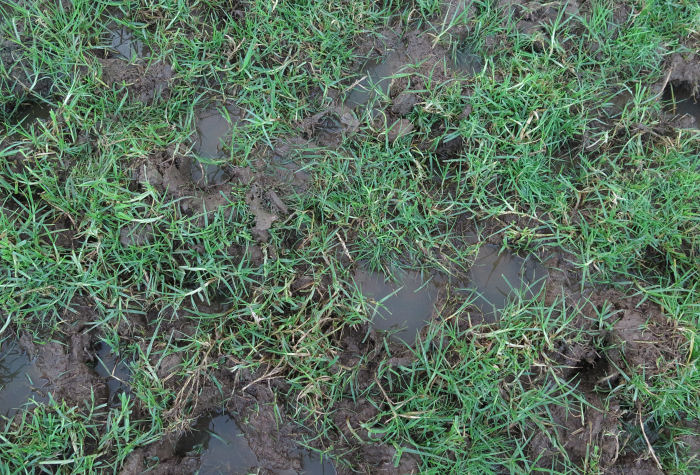 It has rained every day for the last two weeks, so there is as much water on the ground as there is grass.

The grass is growing quite well at the moment, but in such boggy conditions the cattle only get to eat about half of it. 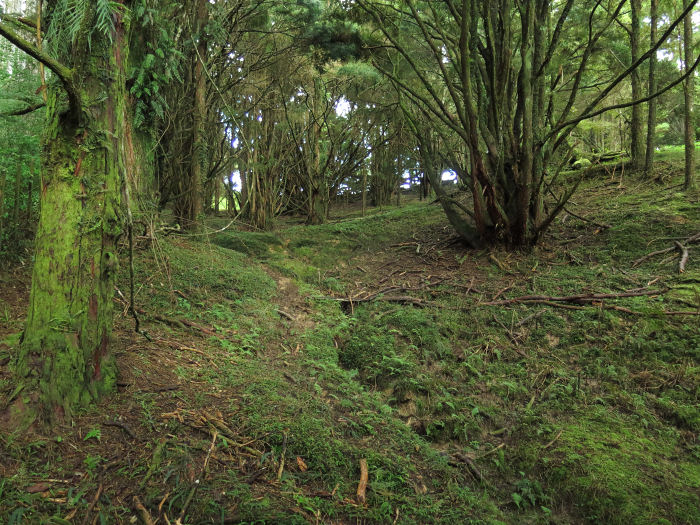 I walked up to open the connecting gate between the Big Back South and North paddocks for the pregnant heifer mob, since they need to stay here for a few days while I'm away on a trip.

I continued on out to the back boundary, to check things were in order - no trees down on fences and so on.

Water obviously runs down here sometimes and there's a swampy area just behind me, where it presumably comes up from beneath the ground.  It's these sorts of places we look at fencing as part of the waterways fencing projects, although there being no running water here in this wet winter does suggest this bit is only a run-off point in heavy rain.  It feeds down into the big swamp.  This will need more thought.

I don't see the cattle on this bit of the hillside very often, but presumably they shelter here at times.  We'll probably fence off the bottom half where it gets wettest and leave the top half so they can continue to use it.  The big Totara trees are not ones we'd clear, but they could do with a bit of pruning - and there's a Puriri or two up the top that will require protection.

Wherever we fence will soon be thick with seedlings of all sorts of trees and understorey plants.

I went off on the 6.20am plane, down to Auckland, on my way to the annual Vet Council meeting day in Wellington tomorrow.

Upon landing in Auckland I went to Jude's place in Grey Lynn, in time to see Stella, Jasper and Louie before they went off to school.

At lunchtime, a much-anticipated meeting with Liz, my long-ago friend and fellow Telephone Technician trainee when we both started work at the Mt Albert Telephone Exchange in the early '80s.  We were very close friends but then lost touch a few years before I moved up here and the other night, a week after it had occurred to me to go searching for Liz on-line, she sent me an email.  I hadn't made contact with her but I had thought a lot about doing so.

We had a most enjoyable catch-up, lunched together and then parted with a plan to meet again on Wednesday when I am here for a second day.

In the evening before dinner, Stella and I had some interesting conversation, along some of the same subject lines as I'd ventured with Ella, last school holidays.

I had previously asked Stella if she would be interested in a discussion about teenage sexuality, to answer a particular question I've been pondering, concerning the present societal value of virginity and how young women in an extremely sexually-permissive society, now negotiate that issue.  No, this is not some religion-influenced, "virginity is your value" question, which was the sort of thing I kept finding when reading others' thoughts about it on the internet; I wanted to find out how Stella's cohort have been influenced by that historic idea of the value of women.  If they exercise their right to express their own sexuality however they wish, is there still that old hang-over about the value of virginity, as there was when I was her age?

It's slightly alarming that this, my most favourite child, has now reached an age when knowledge of these things is important.  There is no point pretending that if we keep children innocent of matters sexual that they will not embark upon experimentation.  My view is that if they are forearmed with good information, they're far less likely to fall victim to others with more knowledge and illicit intent.  Besides, they can look up anything they like on the internet and better that they have reliable information against which to compare what they find, than that they believe some of the awful stuff they see and read on their own.

Up and away in a taxi to the airport before 6.30 this morning.  I was having what seemed to be a friendly and pleasant chat with the driver, until he took it upon himself to opine, having asked about my children, that it was a pity I had chosen not to have any.  Politely I told him it was a bit late in the piece, my now being over fifty, to suggest such a thing and besides, we do live in a society where it is entirely my right to make such a decision.  I also, politely, didn't comment upon his advanced age in relation to his obviously much younger wife whom he said had just produced his third child (he said he was 59 or 69 - hopefully the former!)  He was from Ethiopia, so doubtless there were some cultural or religious assumptions at work there, but he'd also been resident here for at least twenty years.

The rest of the day was far more civilised.  The Veterinary Council annual meetings are always really interesting, talking through how complaints are assessed, investigated, prosecuted when necessary.  It's nice to catch up with people I've now met many times at the meetings and it was the first time since I've been on my current committee, that I've met face-to-face with the two vets I now meet regularly via teleconference calls.

A lovely woman I met for the first time, travelled back to Auckland on the same plane and offered to drop me at Jude's on her way home, so we had time for more conversation. 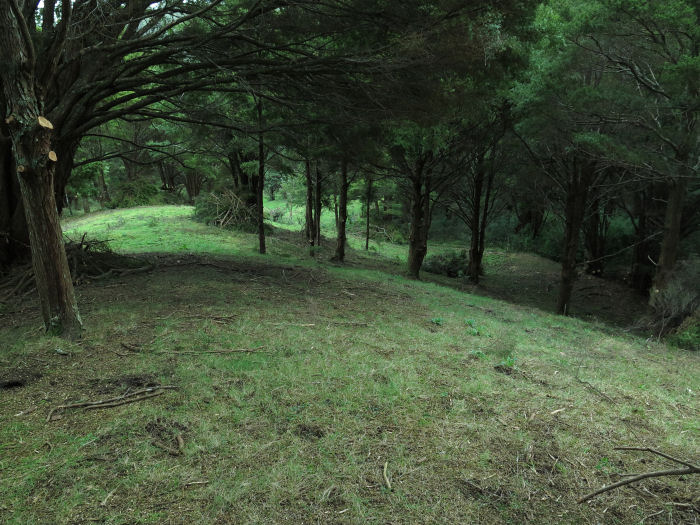 Stephan was busy in my absence!  I told him he had to phone each evening so I knew he was safely home, having gone out on his wobbly knee with the chainsaw.

All of these (Totara) trees had long, low branches which previously made it impossible to look down this slope.  The cattle often pushed in underneath them but some were too low and thick for that, so they were no good for shelter and no good for letting light in to grow grass either.

Stephan is leaving some trees he might otherwise have cut down, for timber harvesting by someone in a couple of decades' time.  Where they're straight with a main trunk, he prunes them and will no doubt return and do the same again when necessary. 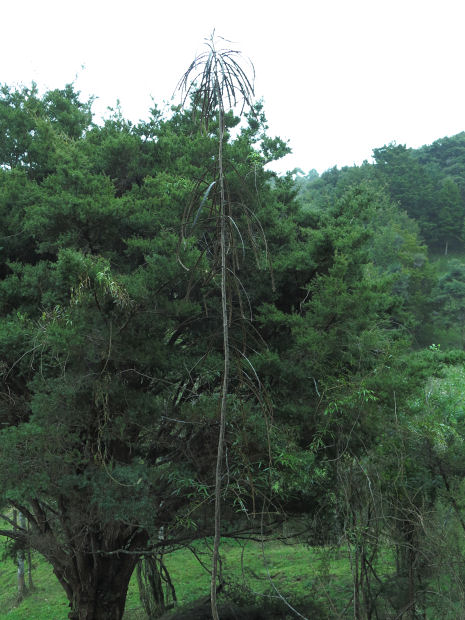 Stephan said he'd found a Lancewood of reasonable size on this slope but it doesn't look very healthy - a bit droopy and its leaf colour seemed off. 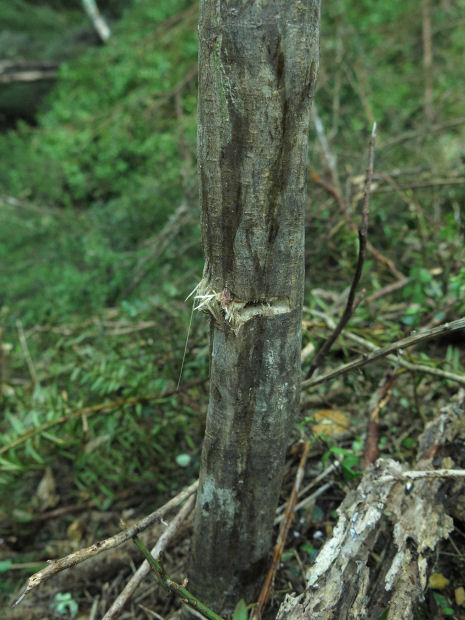 Here's the unfortunate reason why: he must have caught the trunk with the scrub bar without noticing.  We will have to wait and see if it can recover from this or not. 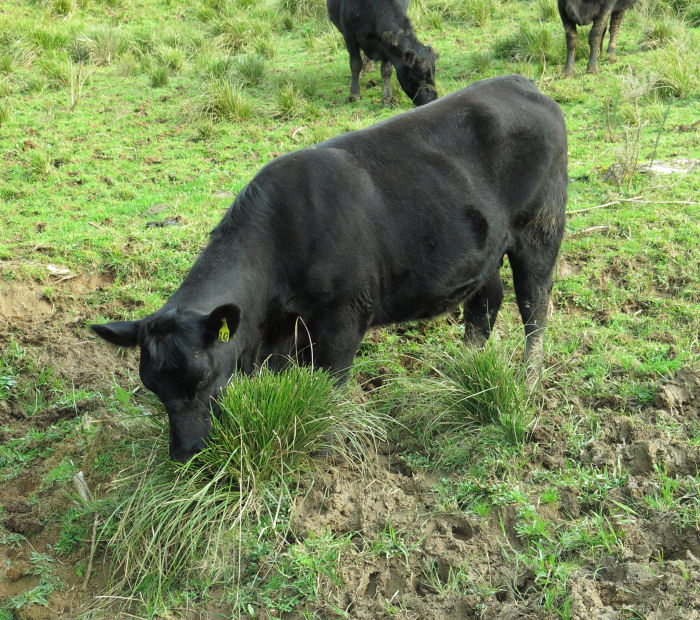 The horribly cutty Australian Sedge plants either become more palatable to the cattle in the winter or they're more willing to eat them because there's less of anything else.  I've watched a number of the animals in the Middle Back paddock taking great mouthfuls of sedge over the last weeks.

I'm not sure how they don't get cut mouths from the leaves; I'm still nursing cuts on my fingers from the day before going to Auckland, when I accidentally pulled on some drooping into a trough I was cleaning. 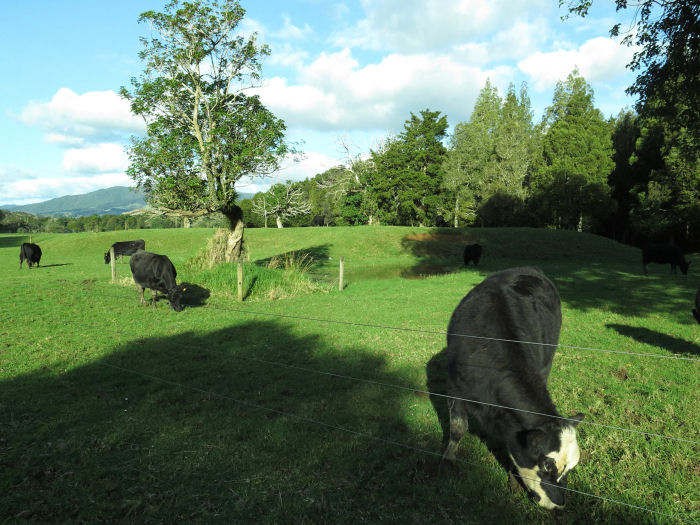 The weather was lovely while I was away and I'm glad the sun is still occasionally shining now that I'm home.  I'm sure the animals must feel just as relieved to have the sun on their backs.