You may recall I posted a photograph of a beautiful little insect a couple of weeks ago, which I presumed was a stick insect.  It was in fact an Assassin Bug. 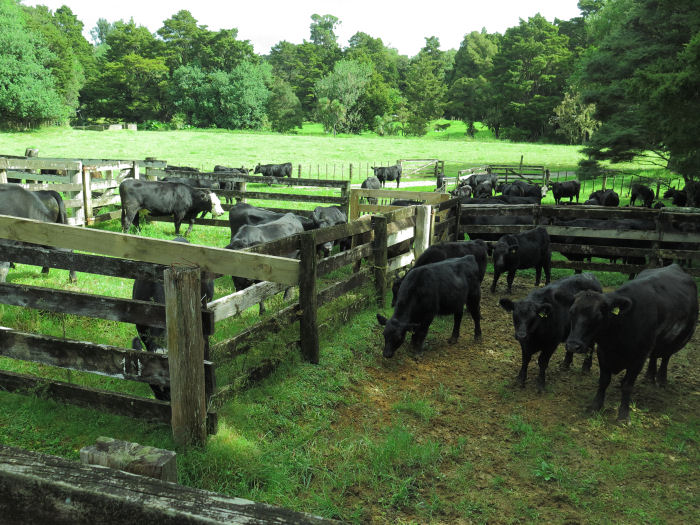 I brought the 91-head mob in to the yards early this afternoon, to give them all a copper injection.  I had planned to do most of it myself while Stephan went off to the wood mill for a while, with a bit of help from him, perhaps, when he came home.  But then we had a call from his brother's work colleague and Stephan ended up at a hospital bedside (now there's a change) for most of the day.

Fortunately coppering the animals is a great deal faster than weighing and I got the job done without too much fuss or shouting.  I don't drench the calves before sale but I do always try to get a copper shot into them because as they get older, they'll be becoming slightly deficient and I want them to go off this farm in tip-top condition for future growth and health.  Having the right amount of copper in their systems keeps their immune systems in good order, so they can best build resistance to parasitic and other challenges.

Afterwards, with Stephan's help when he returned, I drafted 16 pairs out for first weaning over the next few days and sent the other 52 across the road. 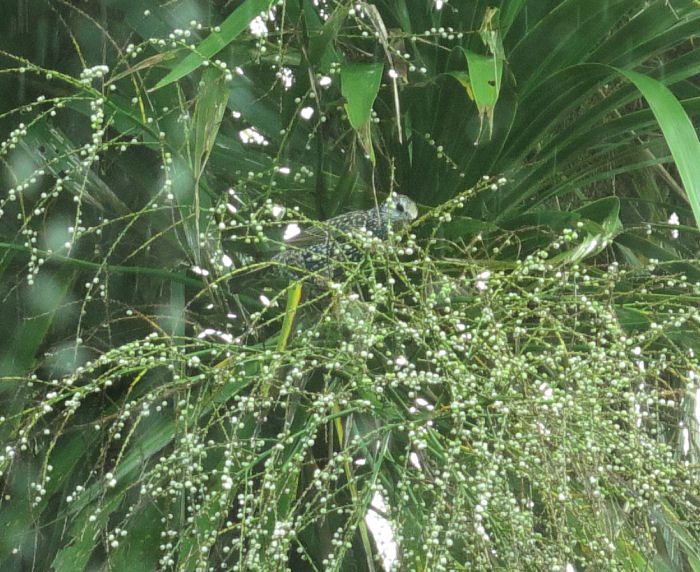 A starling eating Cabbage Tree fruit in the tree in our garden.  I've not observed Starlings doing this before.
It was raining, so I took the picture through the window. 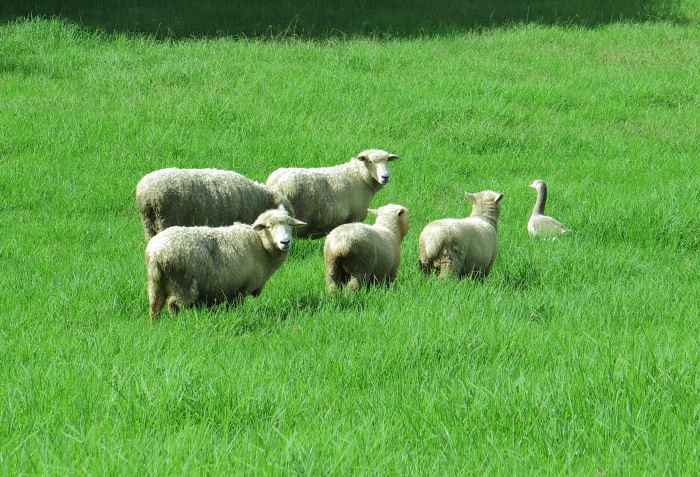 This isn't exactly sheep pasture, being so long, but the House paddock is a safe place for the sheep to live as long as we keep having huge floods!  The first lot of weaner calves will be in here to help them shortly. 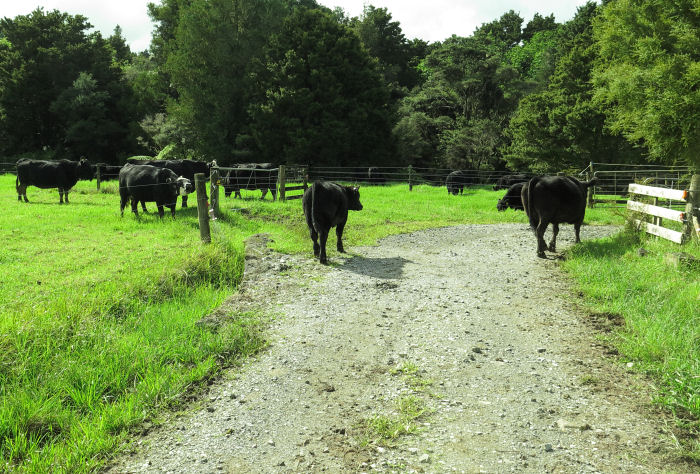 The 16 cow/calf pairs I drafted out from the main mob yesterday, spent the night in the Pines paddock and today I opened the gates and brought them down the lanes and as they arrived at the corner here, drafted nine calves for weaning into the House paddock around to the right, their mothers into the Windmill to the left (where the cows immediately understood what was going on, 714 already calling her protest) and the other seven pairs into the Camp paddock between.  Those will go together across the stream for three days in the Tank paddock before separation as the next weaning group in three days' time. 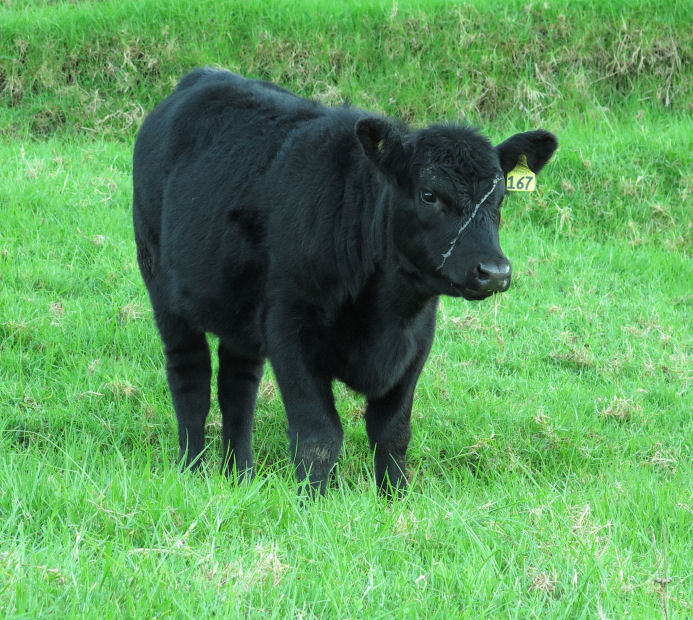 Ella and Lois arrived this afternoon (Lois kindly brings Ella up, stays the night, then goes back to Auckland and work) and so Ella accompanied me up the hill Over the Road to check on the cattle.

This is little nearly-died 167 with her mother's mucous across her nose.  I presume that's not a show of fertile mucous, since Henrietta 141 should be safely pregnant. 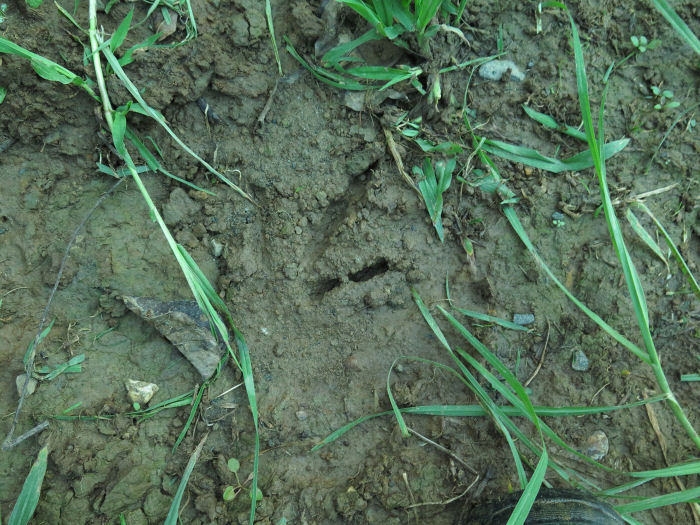 We found a possible Kiwi print at the edge of the road.  How I wish those neighbours with poor dog-control practices would do as they are legally obliged to.  We need to protect the lives of these remaining birds.

Oddly, a conversation with our newest neighbours suggests that the presence of their (controlled but very noisy when disturbed) dogs, might deter dogs from further down the road from wandering this far up.  We can only hope. 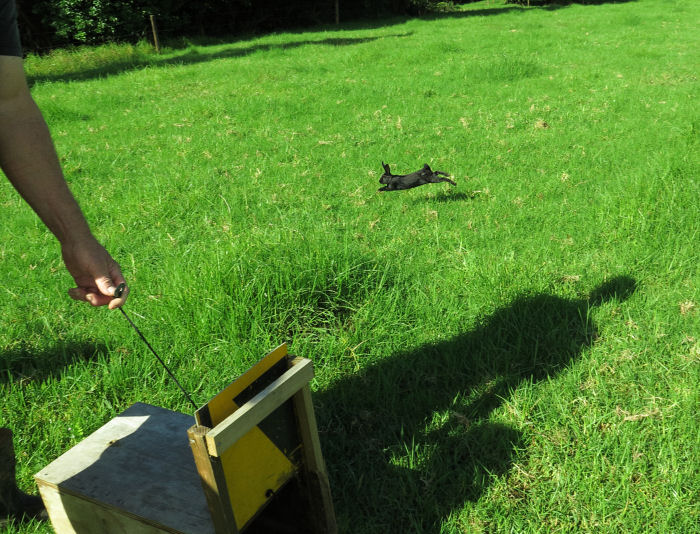 The live capture trap on Jane's place caught this black rabbit overnight.  I like black rabbits and since Stephan came home and told us about it, Ella and I suggested we should let it go here, since our previous black rabbit disappeared some months ago.

Stephan opened the trap and the rabbit shot out, bounded around in a big circle and headed back in the direction of Jane's garden.  [She said she found it dead on her lawn a few weeks later.  It seems that one of the rabbit viruses must be circulating in the local population again.] 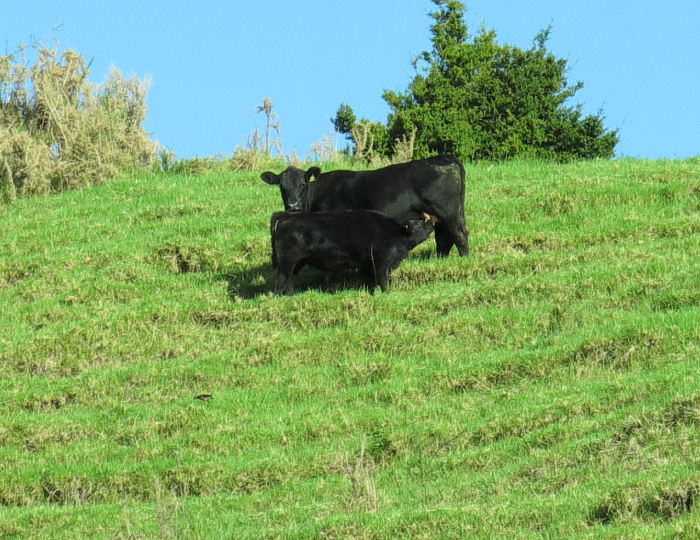 High tea on the hillside.

I'm not sure who this is but most likely Ida 145, with an udder like that. 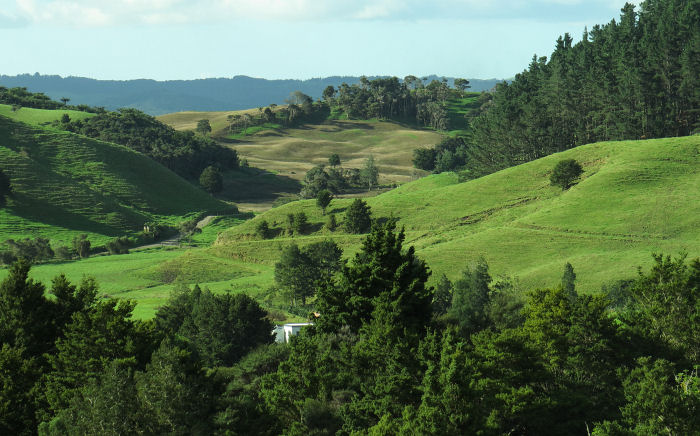 Conventional dairy farming uses an awful lot of herbicide!  I've been watching that brown hillside and wondering when it will show any green, which it is just beginning to now.

Where Kikuyu grass is widespread, some farming systems still regularly spray it out in favour of better production species, primarily because Kikuyu hardly grows through the winter.  The Kikuyu re-invades within about five years.  But what does the repeated application of glyphosate do to the soil systems?  I've always suspected it's a very damaging practice whose effects will accumulate over time.

I remember attending one of the Women in Farming days our then group held, with a proponent of this management system as its primary speaker.  Trisha Fisk (my predecessor in writing for New Zealand Lifestyle Block Magazine and writer of Practical Organics For New Zealand Farmers) and I sat together, posing questions about the wisdom of this seemingly indiscriminate and repeated use of glyphosate, in a never-ending battle against a productive grass in a northland setting. 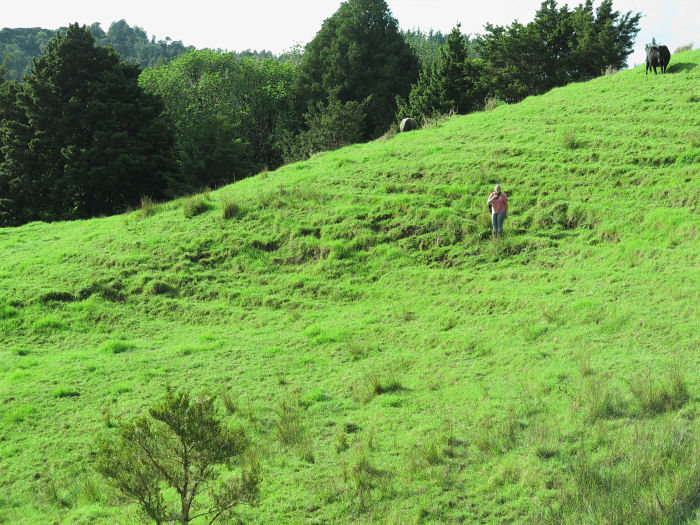 Ella, standing at the top of a large and gradual slip Over the Road.  I told her not to jump up and down!

Ella comes walking with me every day, during which time I subject her to "important discussions".  At 15, somebody needs to have had conversations with her about relationships, sex and consent, pornography (and its insidious intrusion into the lives of youngsters, in ways my generation never experienced), grief, depression, suicide ... I think that was about it; just a few light topics.  I was surprised that she kept coming with me!

Girls won't always talk with their own mothers and as one of her sort-of-aunt people, I discussed having these discussions with her mother, who was very pleased that I was willing to do it.

I became concerned, particularly about the pornography issue (and the assertion that that's where a lot of young men, in particular, are getting their educations about sex and relationships, if their parents are too uncomfortable to supply reliable information), after listening to a couple of discussions on the radio recently (Insight and Nine to Noon). 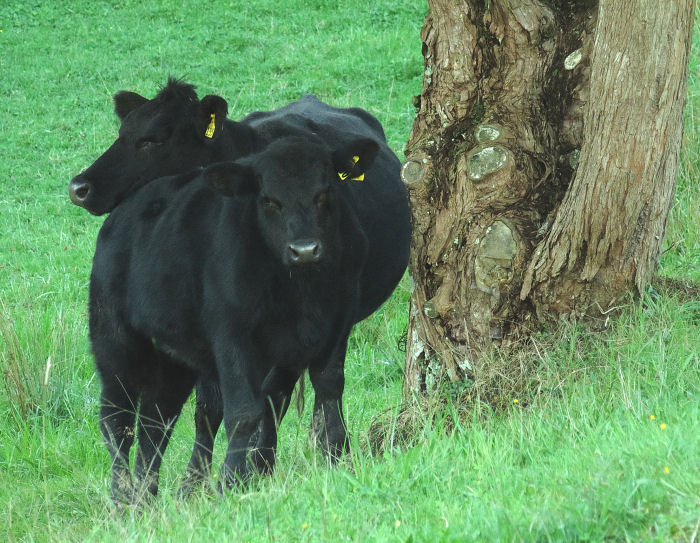 Deva 135 having an affectionate moment with her son; they'll be separated on Wednesday, once the first weaning group have settled down. 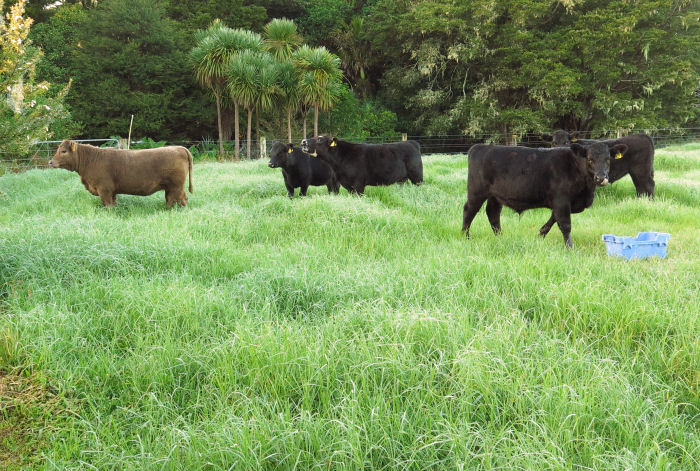 The first group of weaned calves always look good, since they're the oldest and usually best-grown. 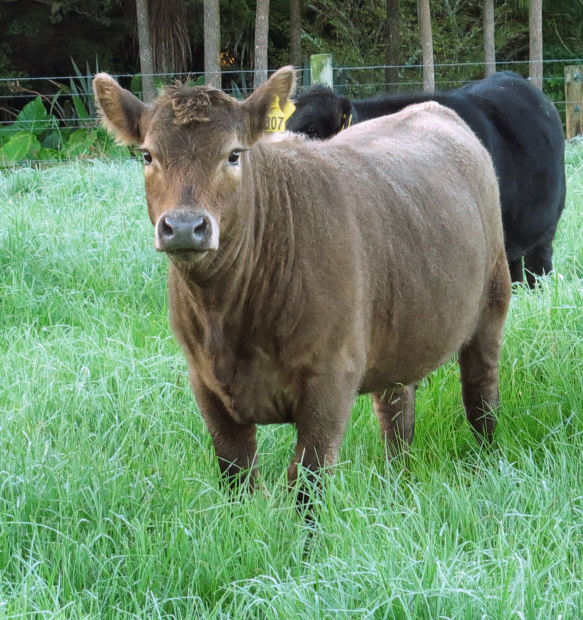 807 is an absolute favourite, being a visual copy of her very good mother, 607, who has only thus far produced two daughters in seven calves, Jet 777 being the first. 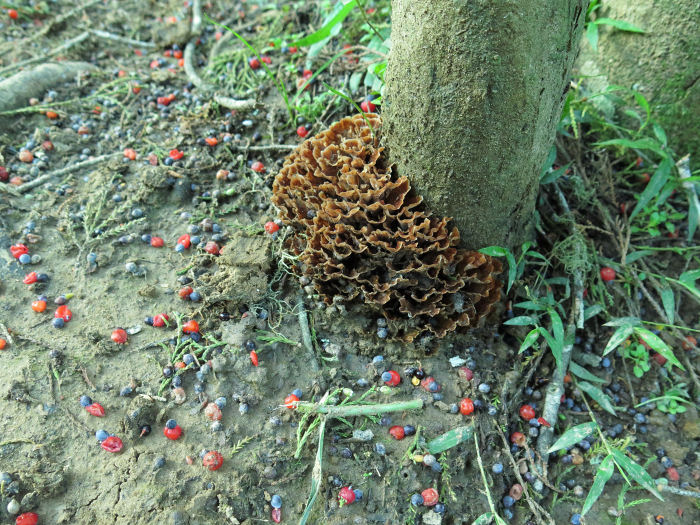 Fallen Kahikatea berries and an interesting fungus growing around the trunk of a dead tree. 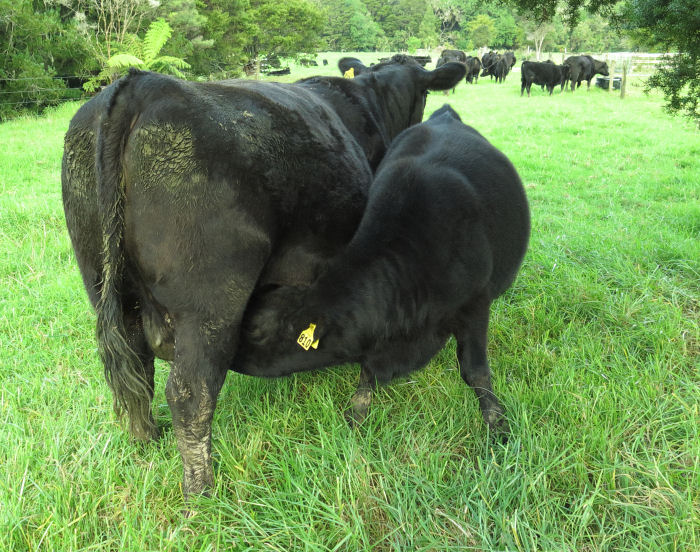 701 and her daughter 810, having their last feed, on the way out of the Camp paddock.  I took them up to the end of the Windmill lane to separate them, calves into the very long grass in Mushroom 1 and the cows into 5d.  I've planned weaning so that alternate groups wean at opposite ends of the Windmill paddock, so the new lot of weaners don't upset those which have already quietened down in the House paddock. 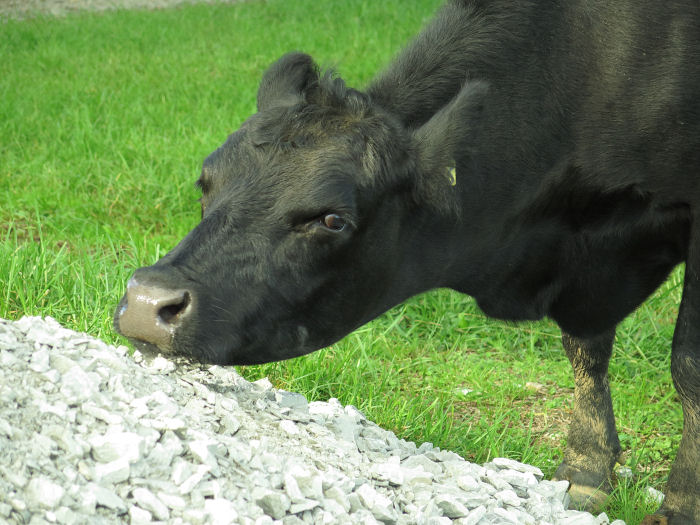 Fancy 126, straight to the lime-rock pile for a face itch, as usual.

Drafting cows and calves away from each other up here is easy, since they're all heading into the same corner and through one gate or the other, thinking they're going in the same direction.

I've been watching Meg 699 with concern, weaned three days ago.  She has appeared very sore in the last couple of days, unwilling to walk very far and very slow when she does move.  Her udder must be tight and painful, preventing her moving around comfortably.  I feared mastitis but concluded there was no (significant) infection when she continued to appear bright in herself. 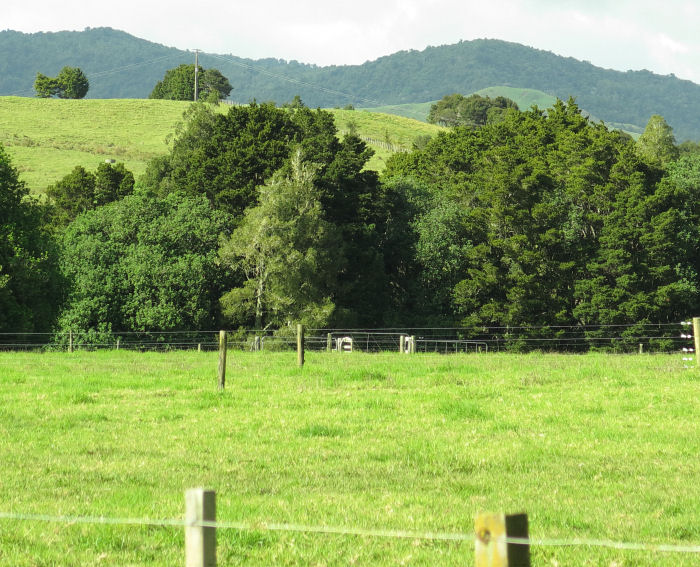 The slope to the right of the power pole on the ridge (not part of our farm, two neighbours' properties across the road) is covered in Australian Sedge plants.  It was mulched at one point and Ryan told me he'd put fert or lime up there for its owner.  It looks very much like the treatments thus far have had little effect on sedge population and growth.  Presumably it is also spreading onto the property to the left, but I can't see that from here.  It seems to be a problem all around this area. 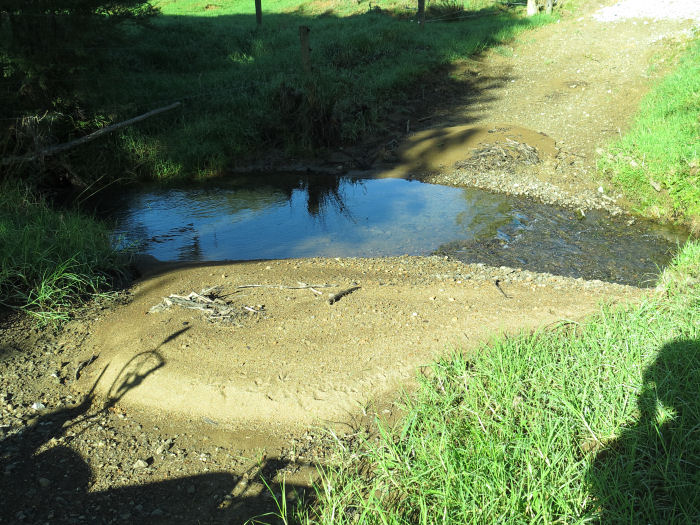 Another lot of rain and another lot of dumped silt in one of the crossings.  We should probably harvest some of this sandy stuff for use in the gardens.  There are always other things to do... 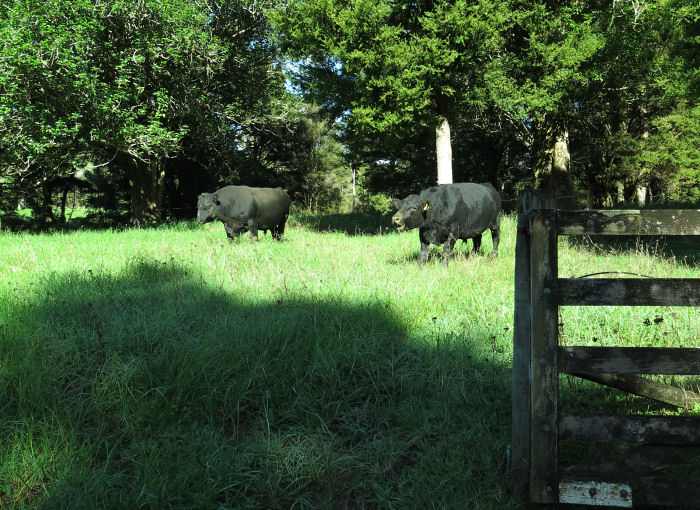 I left the gate between the Swamp and Back Barn paddocks open yesterday for the bulls to move themselves, then promptly rode back through the other Back Barn gateway without a thought.  This morning while I was giving Zella and Imagen and calves their copper shot, I heard the trumpeting call of the big bull and realised what I'd done.  Of course the bulls came straight out of the paddock and down the lanes to the flats.

I put them into this little holding area while I went to get 151, who'd not come all the way down and when he arrived, the others behaved as though they'd never met him before, growling, pacing, pawing the ground.  What a carry-on!  With the two young bulls fighting in the lane, it took a while to get them into this area so they were out of the way for some others to go past. 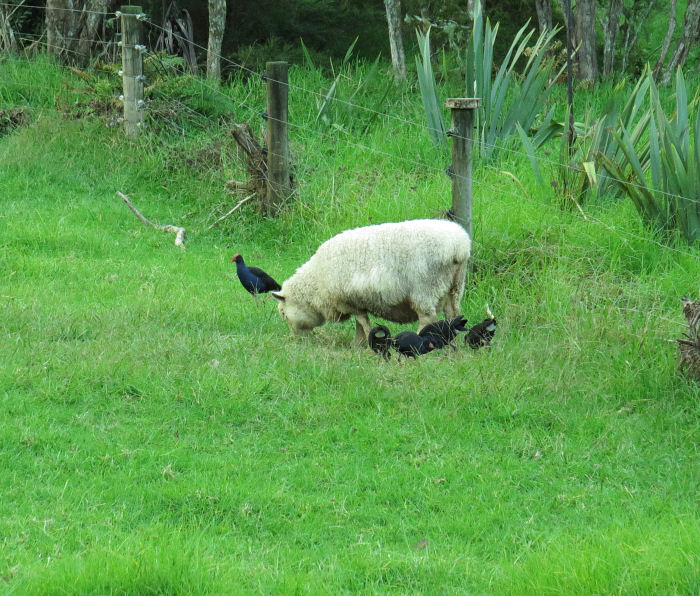 The Pukeko family are still all still marauding around as a group, a lot less afraid of our movements than earlier groups of birds here, so much so that they don't wait long to come in and help the sheep eat their maize.

They could become a bit of a problem over the winter, if they start moving into the garden and eating the plants we're trying to grow.