The week beginning the 1st of April 2017.
Saturday the 1st 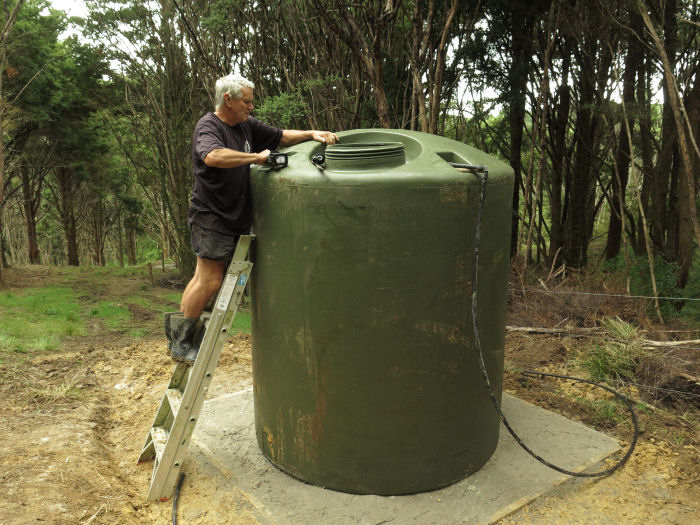 The tank's float valve arrived this morning (to our enormous surprise, since the mail never comes in the morning, but now the postal service is not delivering mail, only contract-courier items, on a Saturday, it seems to have altered the timing significantly).

I made a small alteration to the valve because there's a small piece inside which might occasionally need taking out to clear any debris which comes up the pipe and, as that piece is independent from the rest of the valve and doesn't float in water (I tested it in the sink), I judged it wise to work out how to tie it to the other bit you unscrew to get to it.  It would be an absolute pain to have to drain the tank to retrieve the essential inner workings of the float valve after it sank to the bottom of five and a half thousand litres of water!

We took all sorts of alkathene pipe fittings, the cordless drill and set up the inlet, overflow outlet and plumbed the outlet at the bottom of the tank to feed the trough just down the hill.  A tap there allows the tank to be switched on to the rest of the system whenever it's needed.

Until Stephan can get back up here to put a couple of posts in, he put an electric tape up around the tank to stop the cattle walking on the base or rubbing on any part of the set-up. 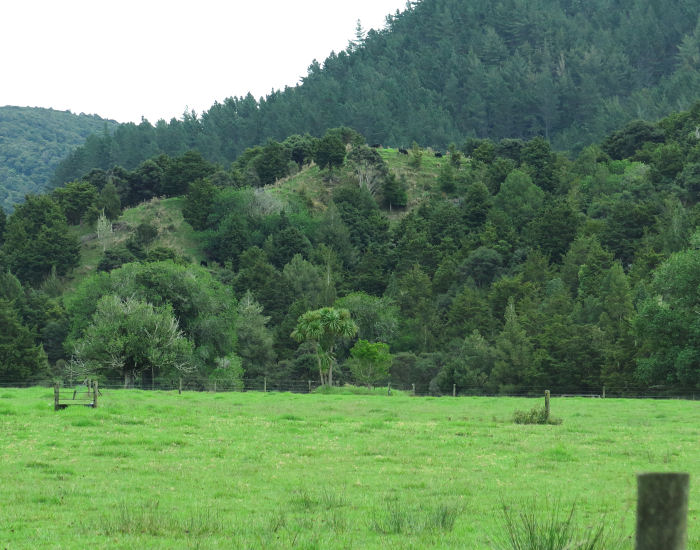 After moving the mob of 91 cattle from Flat 1 to the Small Hill, I looked back with pleasure to see several of them already grazing the upper slopes.  Some of them are not awfully good about going up there.  Since Stephan did a lot of clearing when fencing off the stream, the hillside is more open and it's easier for the cattle to get there - and there's a bit more grass growing in the opened spaces. 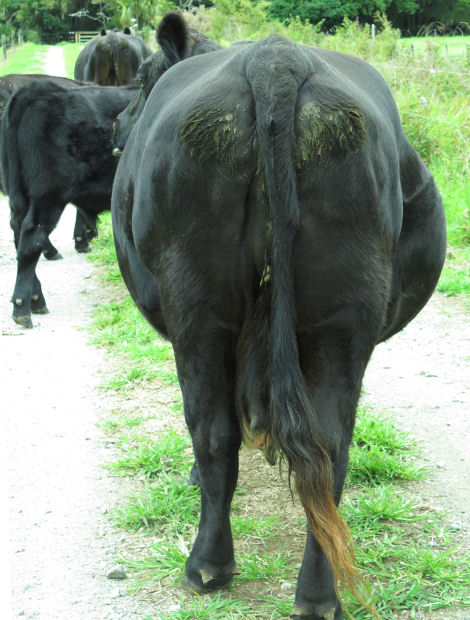 Bringing Imagen and Zella down toward home for the nightly separation from their calves, I took a picture of Imagen's broken tail, for the record.  (It kinks to the right about half-way down, having been broken by her careless mother, Ivy, when she was a calf.)  Imagen hasn't much longer on the farm and we will miss her.  She's not particularly fond of us, nor very interactive but like all the animals with particular stories or with which we've had long interaction, she's important and her necessary departure will make a difference to our days.

I should have sent her off last year but ended up reneging on any culling decisions and keeping all the cows who'd made it to that list.  Fortunately the winter was reasonably mild and they did well enough; but some parts of the dry summer could have been just a little easier with a dozen less animals to feed.

Imagen has to go because she must not calve again, with her hugely unwieldy udder and inability to feed a newborn calf without assistance - or even sometimes to give birth without disabling trauma to her baby.  She's only 11½ but has been showing some signs of discomfort in her hips in the last couple of years. 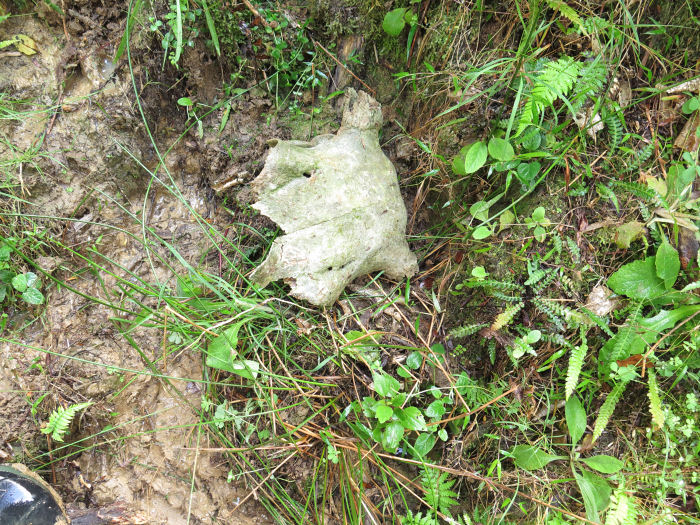 This animal must have died many, many years ago.  I wonder when and under whose ownership?

I was climbing the Small Hill because I could not find Eva.  Eva has history here and I suffer some sort of post traumatic response whenever I can't find her in this paddock.  With thumping heart and trying to breathe myself into calmness, I climbed up and down along the hill looking for her, only finding her when I'd decided that perhaps she wasn't here, there having been a window of opportunity during yesterday's move, to go along into the Big Back paddock.  Then I spotted her, tucked under the trees with her calf sitting nearby, chewing her cud, entirely unconcerned by my concern. 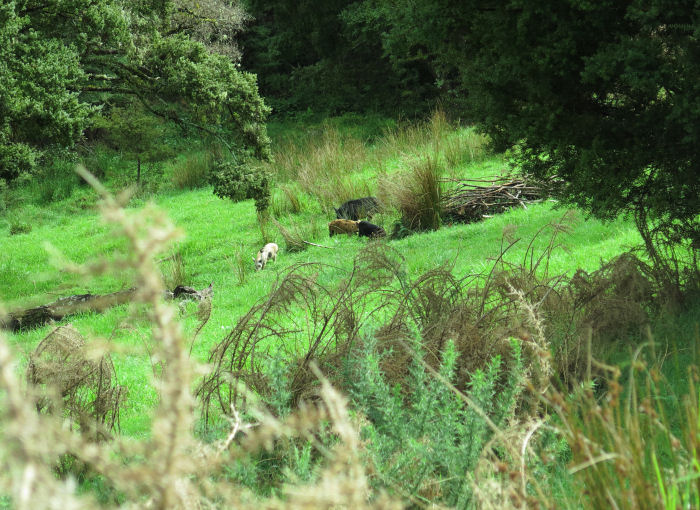 When I looked over the top of the ridge into the Big Back North, I saw these unwelcome visitors.  The things you see when you don't have a gun!  This is the family I've taken aim at before, over the other side of the farm. 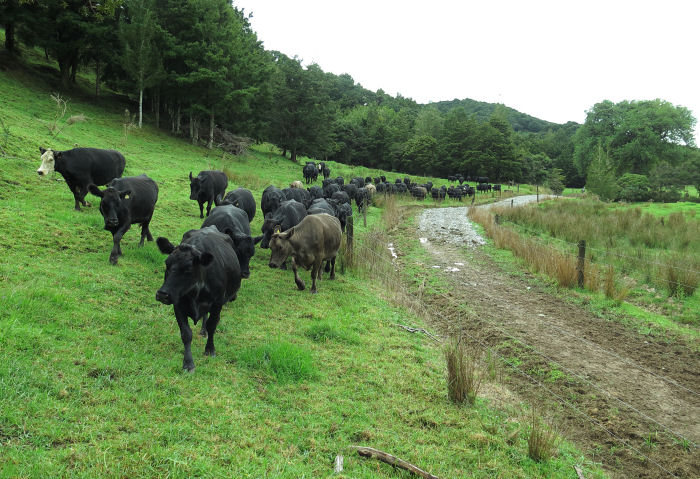 Having ticked everyone off my list, I called them to follow me along to the Big Back. 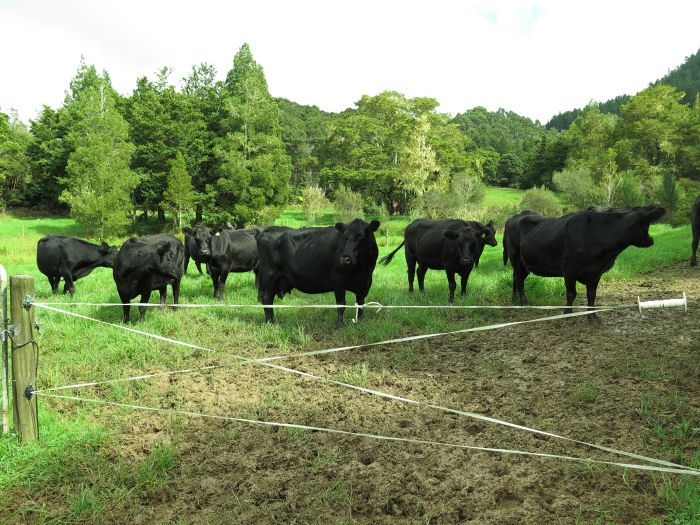 Some of them did not appear very impressed.  Something is really off with some of the grass at this time of year. 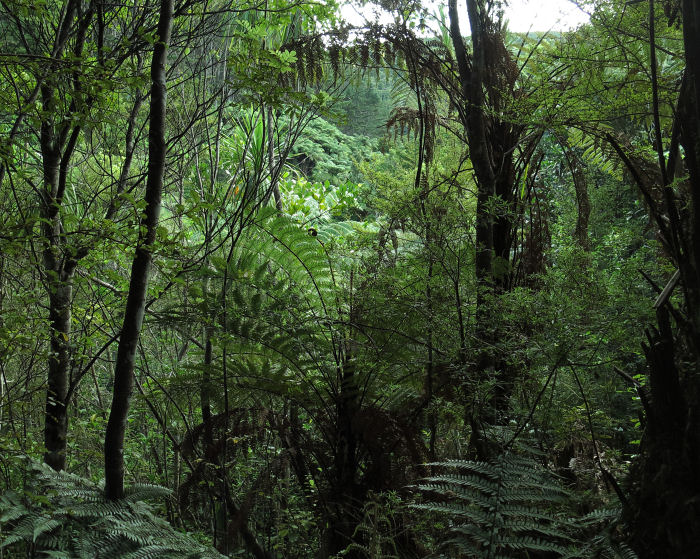 Another big dump of rain is due tomorrow so I went up into the bush again, with wire and pliers to try and secure the water pipes and filter a little better than I'd had time to the other day.

This was a view from the first rise, just before I got lost again.  Mislaid, perhaps, not really lost.  With the GPS I could see when I wandered too far from the track I'd previously recorded but that didn't always help very much, when a few metres to the left was a near vertical face and to the right, too far up the hillside.  I keep forgetting to take some marker ribbon with me to make the way clearer.

The water filter is probably under the mass of tree ferns in the centre of the picture. 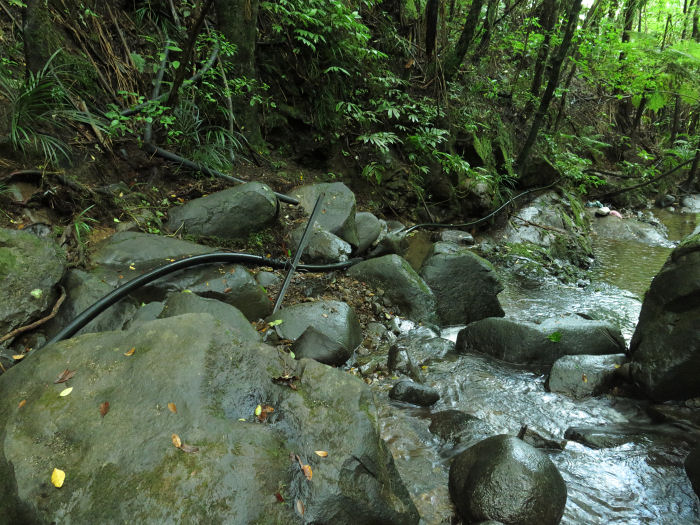 Leaving my boots and some of my clothes down on the rocks below, I climbed up the stream bed.  The wire attached to that steel waratah in the foreground, was not well twisted around the pipe and the fitting, so I rearranged it then went on up to the filter. 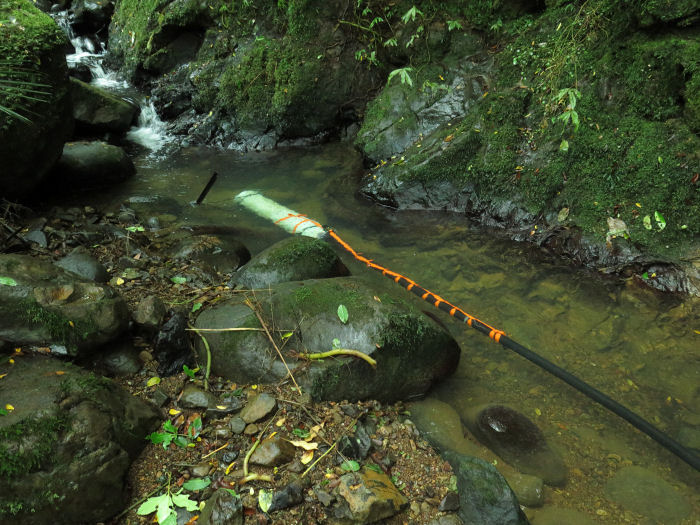 While applying some wire to the waratah to which the filter is tied, I unfortunately jiggled the filter around sufficiently to dislodge the pipe from its fitting.  This time the heavy tool I'd not carried up the hill was the big wrench for tightening the fittings.  This pipe must not have been as firmly fixed as I thought last time, due to being older and slightly misshapen.

The only way I had of reconnecting it so that it would stay on was with my ratchet system and I'd just have to hope it held everything together.

I think I'll build a hut up here and move in. 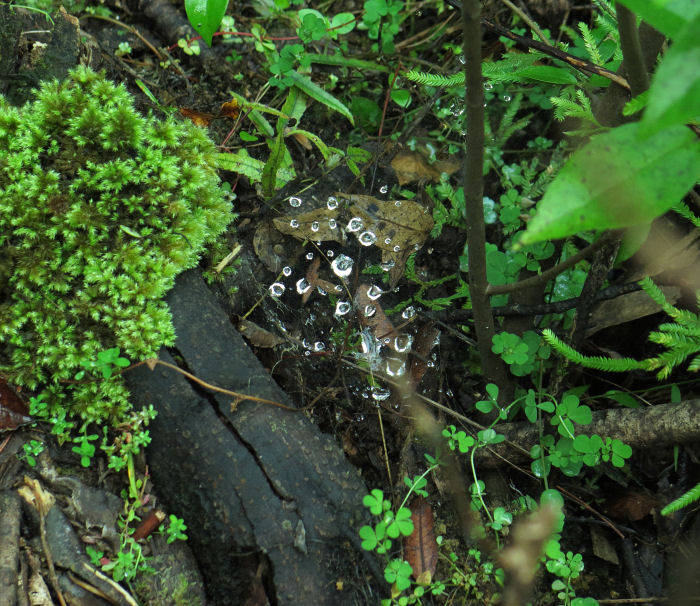 The bush was all quite damp and part-way down the hill, the loveliness of these raindrops caught in a spiderweb sparkled beside my path. 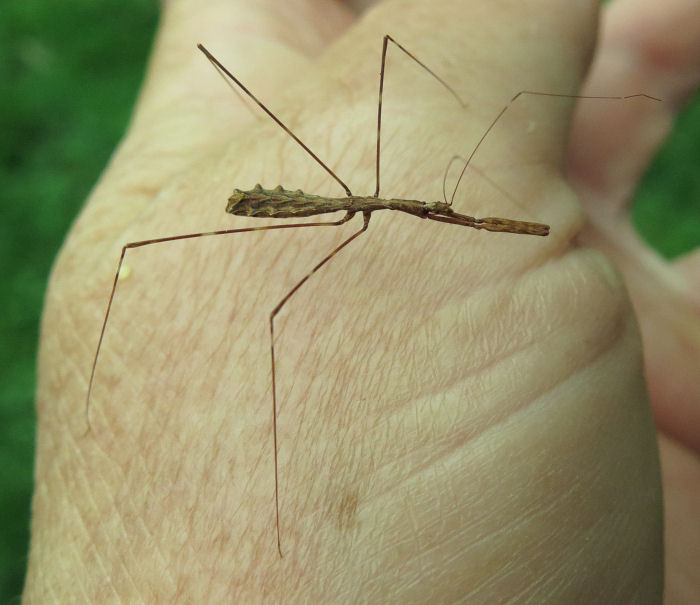 At the bottom of the hill I discovered a little friend on the back of my neck: a minute stick insect.  I couldn't see it clearly at all, being much smaller than the ones I usually find but fortunately managed to take some decent pictures of it.  I think it's the most beautiful stick insect I've ever seen.

I've sent the picture to an entomologist for identification.

I also posted it on the NatureWatch site, which concluded it is not a stick insect at all but a Thread-legged Bug, a type of Assassin Bug. 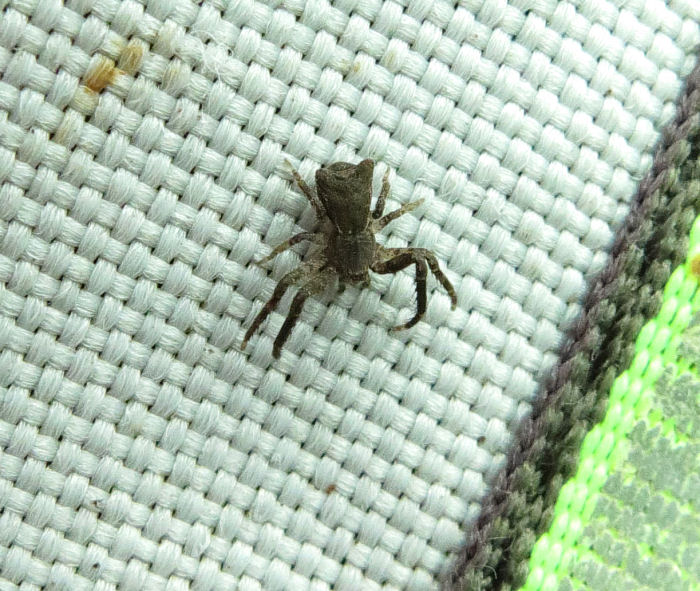 And a little square-ended spider on my backpack. 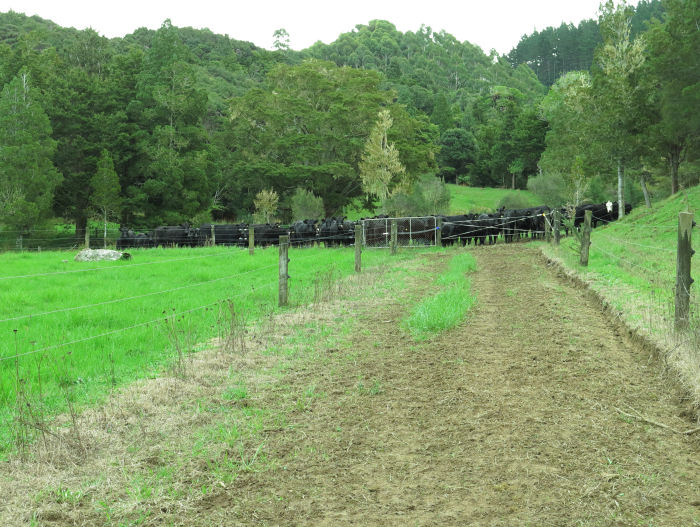 When I went around to move the cows and calves, they were all waiting at the bottom of the paddock.

I shifted them out and along to the left to the Big Back South, then left the gates open for access to the Bush Flat paddock, because if there is as much rain tomorrow as forecast, there could be no water to their trough by the end of the day and we might not even get home from a trip to Whangarei.  There is stream access in the Bush Flat. 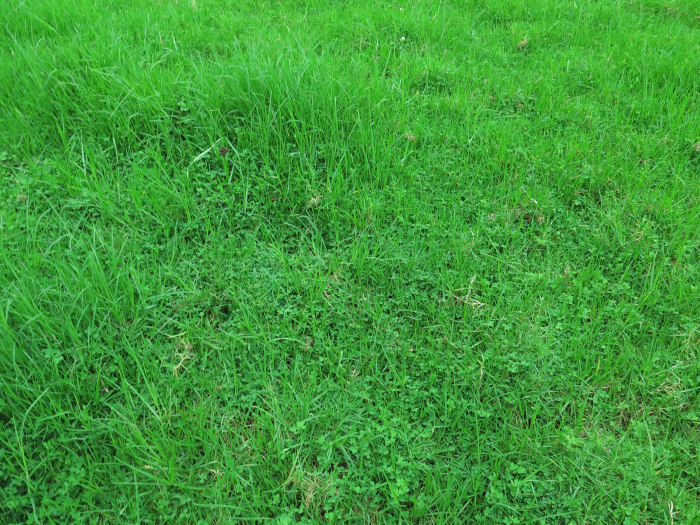 To my surprise there's quite a lot of clover growing in the often wet, pugged part of the Bush Flat.  Something's obviously right in this pasture, even if it isn't my management when the water comes flooding down from the Small Hill. 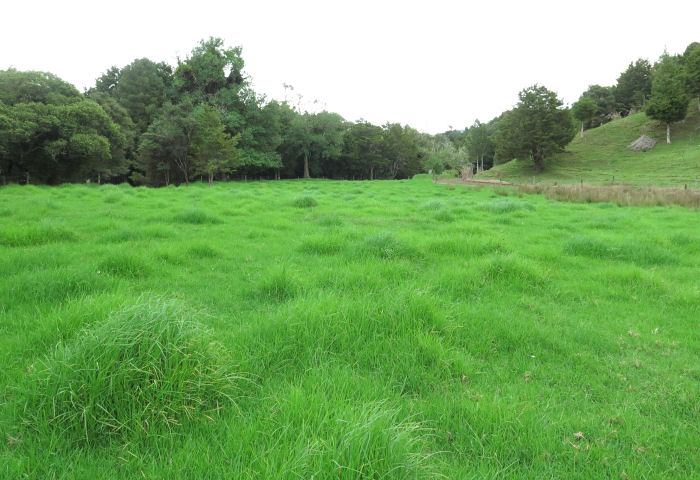 So much lovely grass.

We set off at 7.20am for Whangarei, travelling well enough despite the horribly wet weather.  Stephan had a 12.30 appointment for an MRI on his knee, so we went to half of a field day on the way, on farm forestry with native trees - Totara are so widespread in Northland, that many people have been preparing them to be millable trees in future decades.

After the MRI we went to visit Sheila, a lovely woman who used to be my mother's Vicar's Warden when Jill was Vicar of the Whangarei Parish.  Sheila always enjoys preparing a delicious lunch to share with us and it's lovely to visit her and have somewhere nice to pause in the middle of a trip.

Then home again through more inclement weather, fortunately very little of it being the torrential downpours earlier forecast.

We went off to town for our annual influenza vaccinations this morning and for the first time ever, I went all faint and weird afterwards.  Presumably I'm just over-tired after yesterday.  I had a wee lie down on a nurse's examination bed and then they let me leave. 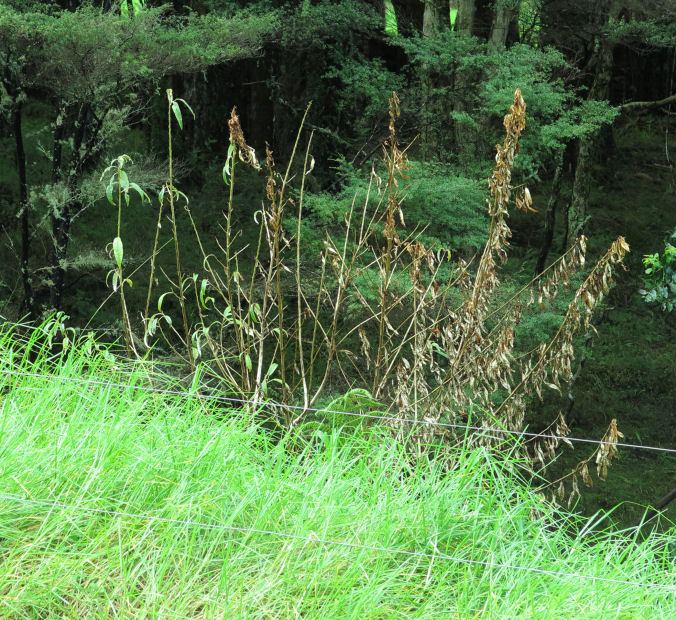 Here is the sick Fuchsia again, with its few still-healthy leaves.  I might have to examine its roots to see if there's any obvious reason for its sudden decline.  There's another tree upstream which must have been similarly flooded but it looks as healthy as ever. 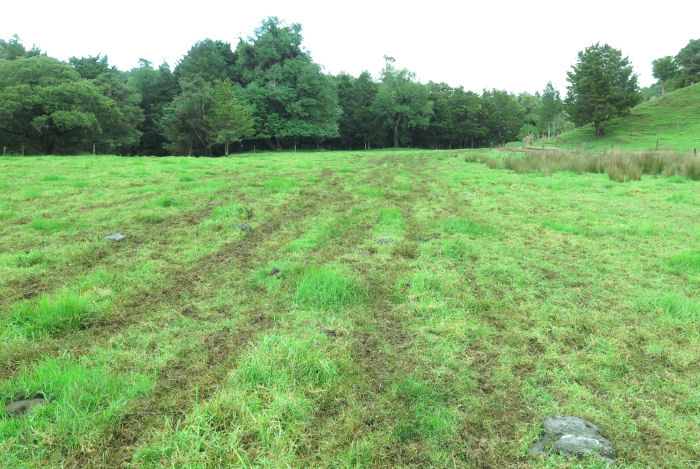 The cattle have trashed the beautiful Bush Flat!  Looks like they ate most of the grass first, before marching up and down repeatedly, coming to see if I'd arrived to move them yet. 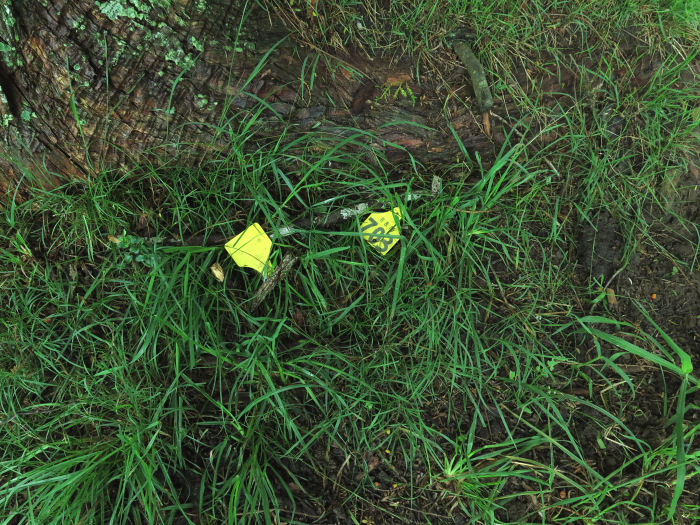 I couldn't recognise one of the cows, her face not matching the identity of any of those without numbered tags.  I eventually figured out who she was and confirmed the identification when I discovered her tag under a tree, on which she must have been scratching when she broke the tag out of her ear. 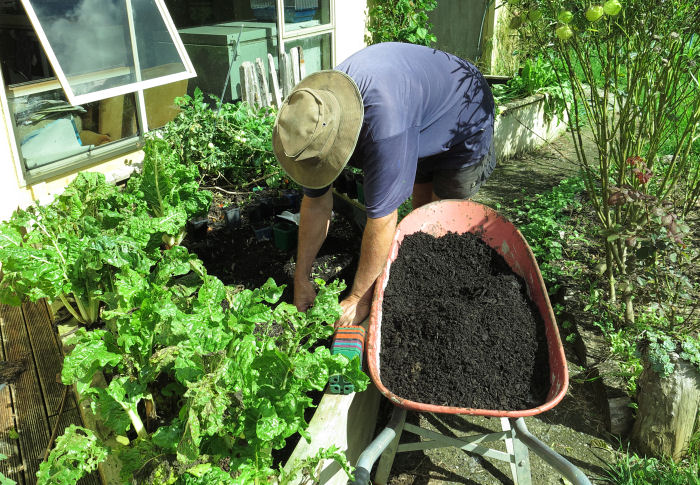 Stephan and Floss, gardening together, potting up tiny Swan plant seedlings which have sprouted everywhere, then discovering some Kumara tubers where he'd forgotten they were growing.

This happy scene was soon disrupted by Floss's tendency to attack Stephan in a vicious and unprovoked manner and I had to take her away. 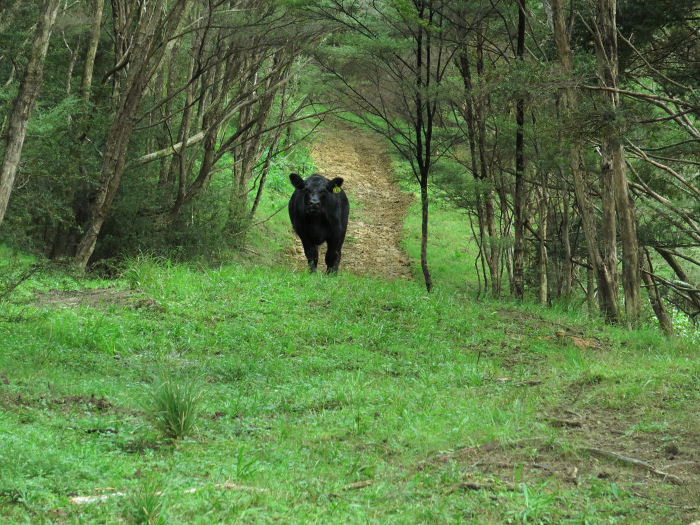 This is Gertrude 162, daughter of Eva, and I suspect this will become a regular pattern: everyone else had come quite quickly to my call to move from the Spring to the Middle Back, except the last few stragglers, all of whom were related to Demelza.  I counted to 90, called some more, waited, then climbed the slope to the Spring's central ridge.  From there I watched one lone calf running around toward the bottom end of the paddock and heard her call occasionally as I walked back down to the gateway.  I didn't know who it was but was not surprised when I saw her tag.