The week beginning the 8th of April 2017.
Saturday the 8th 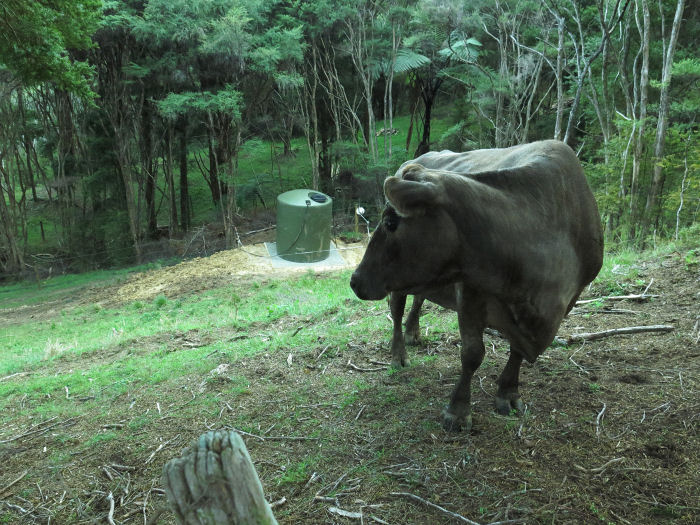 What a nice tank.  I feel a great deal safer about everything with the water system all sorted out.

A tank up here even gives us the option, if we ever need it, of collecting the spring water from further up the hill to fill the tank, rather than relying on the main gravity system, should that become unsustainable when we're too decrepit to get up there to maintain it. 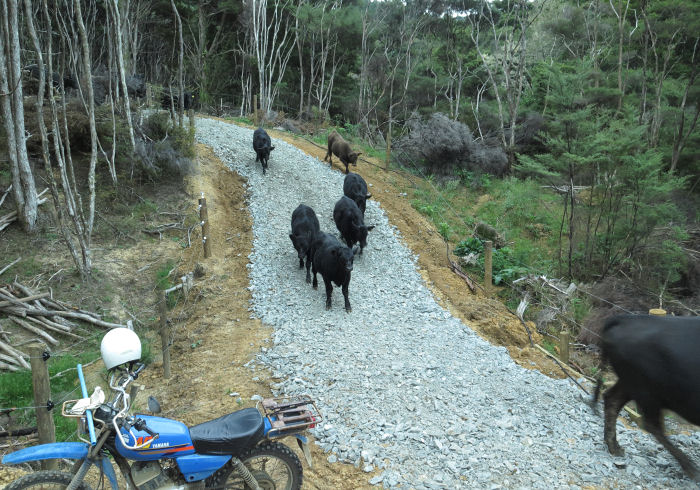 I took the cattle out through the new gate onto Route 356 for the first time.  My intention was that they'd walk along the track and out through the open gate at the other end, onto the lane and in to the Blackberry paddock. 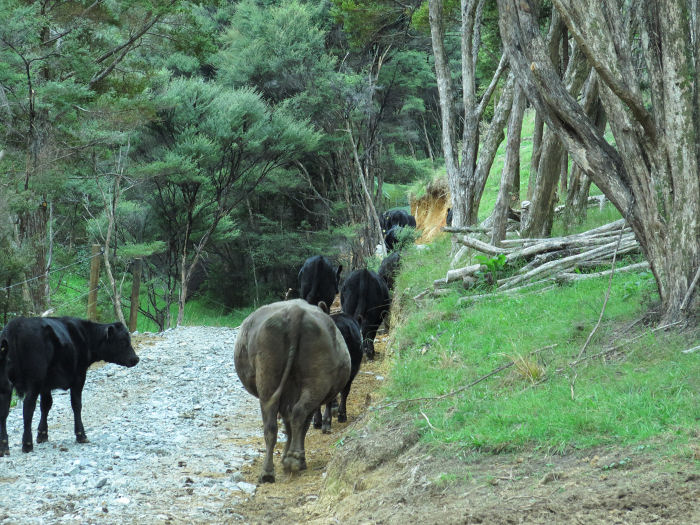 They seemed to be doing the right thing, but when I got to the end of the track, nobody had gone out the gate, they'd just carried on along into the paddock and up the slopes.  Tomorrow then. 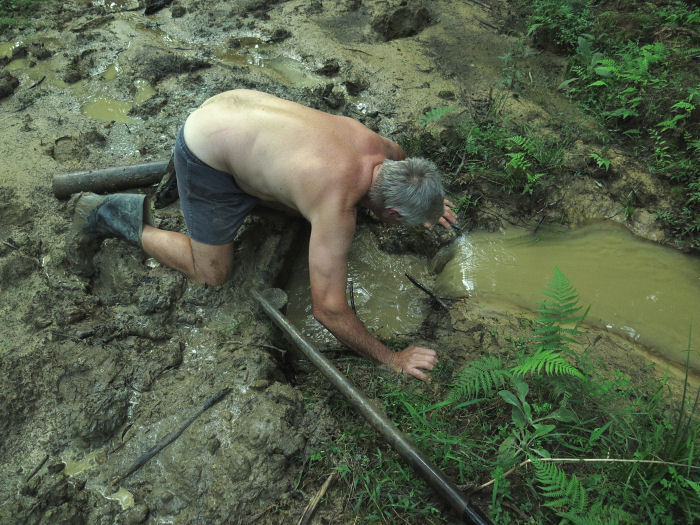 I've concluded that Stephan quite likes playing in the mud; at least he never seems to mind.  His half-naked state was because he'd removed his overalls so they didn't get all wet.

This is one of the troublesome culverts we installed in the Swamp East paddock last year.  So much debris and silt come down from up the hill that they regularly block and then the track stays all boggy.  Until we fence off the gullies that feed them, we'll have to keep on unblocking the mess whenever it rains.  We're assuming that some of the silt movement is because the cattle walk through the watercourse but it might not be that and perhaps we just needed bigger pipes. 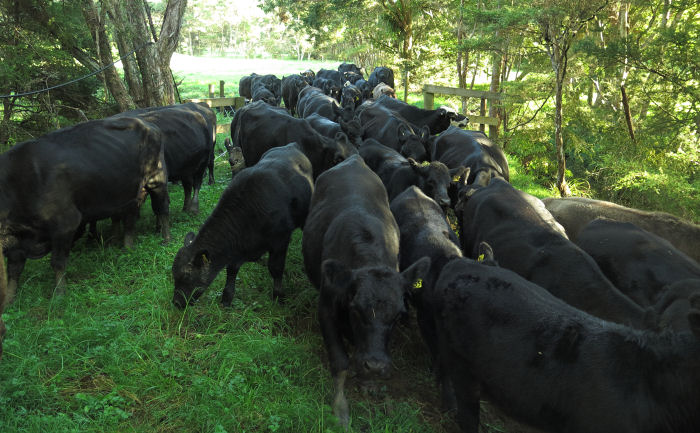 The big mob had eventually reached the Blackberry paddock, which is quite small for such a big mob and they were keen to move by the time I opened the gates for them this morning.  They streamed out in a great warm black mass, crossed the stream and spread out grazing the fresh grass in the Swamp East. 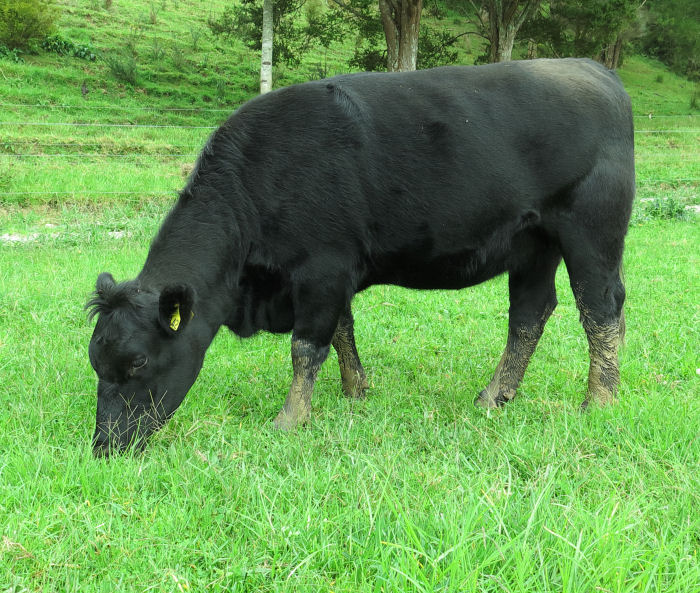 This is Gina 142, Emergency's 2014 daughter.  She's now in calf, due at the end of September.  I wasn't going to keep her, after she showed signs of being far too wild for my liking when she was a yearling; but this season she really calmed down and now I can scratch her rump (which is why she looks a bit dusty there).  She was a bit jumpy to inseminate but I was apparently successful.

Emergency is quite a small cow and it looks like Gina will be of a similar mature size. 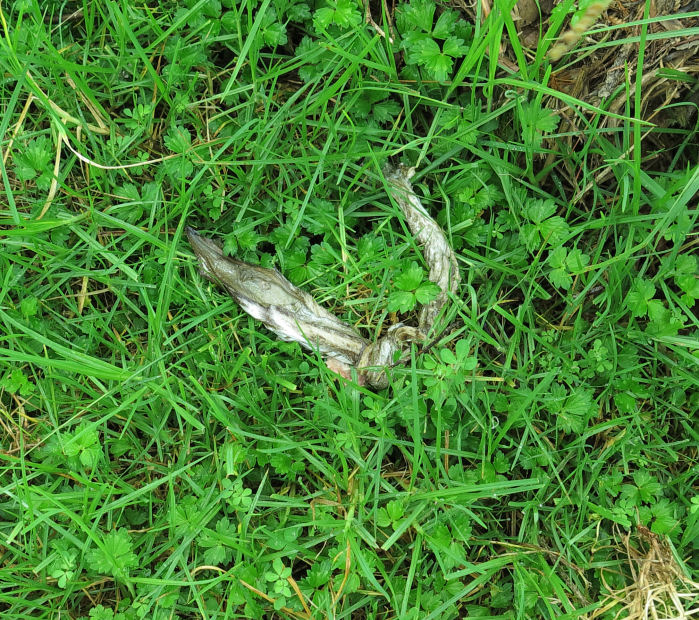 I came back from moving the cattle and found Stephan spluttering as he worked to extract the remains of this dead eel from the water pipes and the small pool beside our deck.  The smell was awful.  Goodness knows how it got into the pipe. 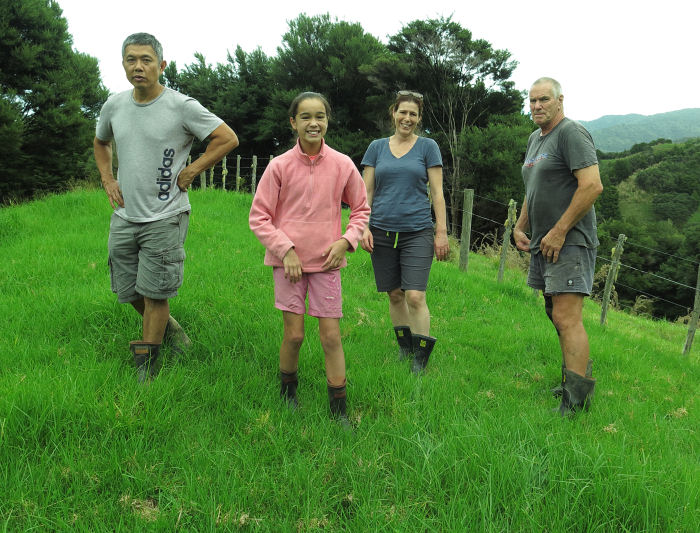 Justine, Taka and the girls, who usually live in Melbourne but are back home for a family wedding, came out for a visit and walk.

We walked up the hill to look into the big tank, which we're in the process of emptying, now we've found dead eel bits in the system.  I don't think any could have got into the tank, but it has been a bit cloudy since we accidentally nearly emptied it a while ago and I'd like to check what's at the bottom. 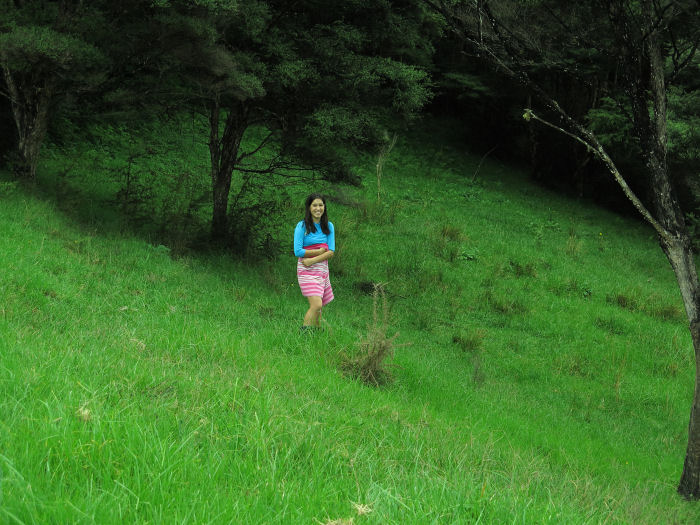 Sophie set off down the hill before the rest of us so I said I'd photoshop her into the picture.  Except that would look weird, so I won't. 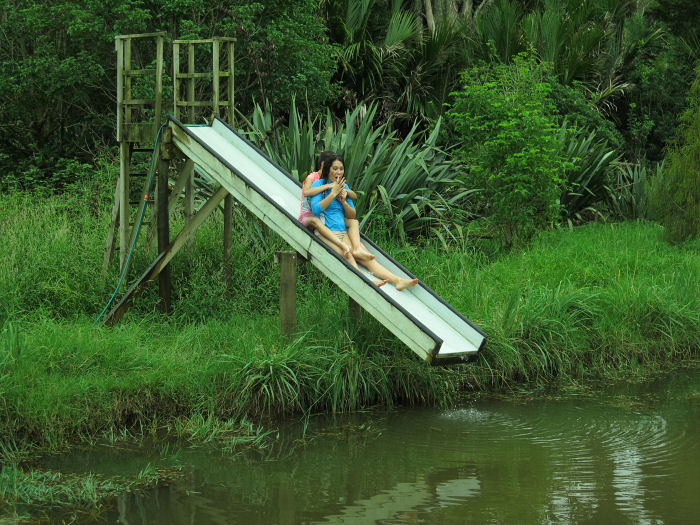 Sophie and Annabel had a great time in the pond.  Without any dead eels.

Another big lot of rain, this time from ex-Tropical Cyclone Cook, brought the river up over the bridge.  The water went off but it turned out to be a break in the pipe on the flats, not anything up at the source.  The sun came out at 1pm. 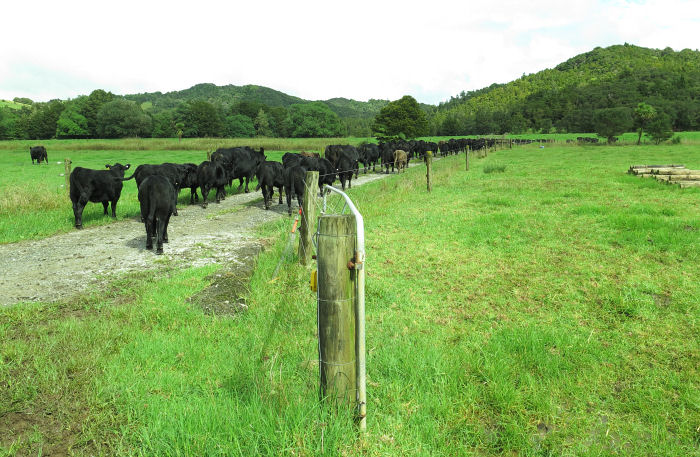 The big mob won't be together for much longer now, since it's very nearly weaning time.

I enjoy this time of the year very much, seeing all these lovely, healthy calves growing so well but the closer we get to weaning, the more I'm anticipating what comes next.  I'd like to develop a new habit, one that doesn't suck some of the joy out of the present by worrying about tomorrow!

There's a wood-working project in progress in Stephan's shed.  A member of our extended family is dying and he and an adult son came out to do a bit of work with Stephan this morning on the coffin.  They're using timber from a locally milled pine tree and a pattern from a helpful internet site.  While it's a very sad thing to have to do for someone you know, it feels like an enormous honour.

In this country a Funeral Director is not required to be used.  Everything can be done by ordinary people and in this case, we have the luxury of time to get things organised.  Some services do cost money, like the purchase of a burial plot or having a body cremated but everything else is potentially vastly less costly than if one hands over all the arrangements to a professional.  People naturally do that in a time of great stress.  Who would want to have to work out how to build a coffin (and you don't even need one if you're being buried), how to run some sort of memorial service for family and friends, what is legally required and so on in those first stressful days after the death of someone close?

It is something that has interested me for years, having done things quite differently from normal practice at the time, when my father died.  If we were Māori it would have been entirely unremarkable to have the body of the deceased in the home.  In the middle of Auckland then, it was not.  Now that practice is a bit more common amongst the pakeha community and I think that's a great deal healthier than pretending whatever it is people pretend when they leave things hidden away.