The week beginning the 9th of April 2016.
Saturday the 9th 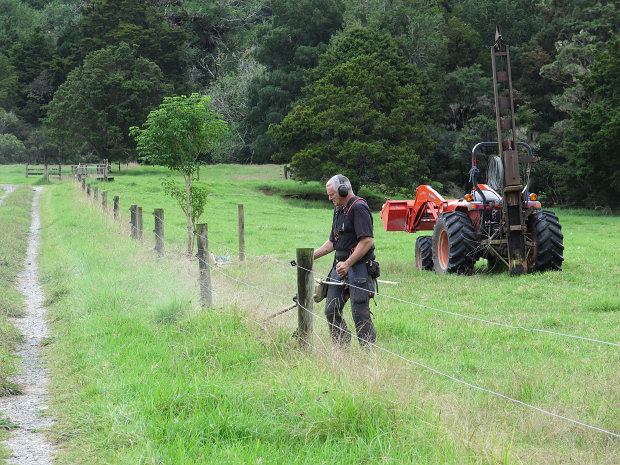 Stephan, getting ready to change the reserve which he originally built for Damian's grave (where that nice young Puriri is growing), spent some time cutting the thick grass underneath the House Paddock fence.  Grass growing up over the bottom fence wires is making our electric fence system really struggle because wet grass shorts the system to the ground. 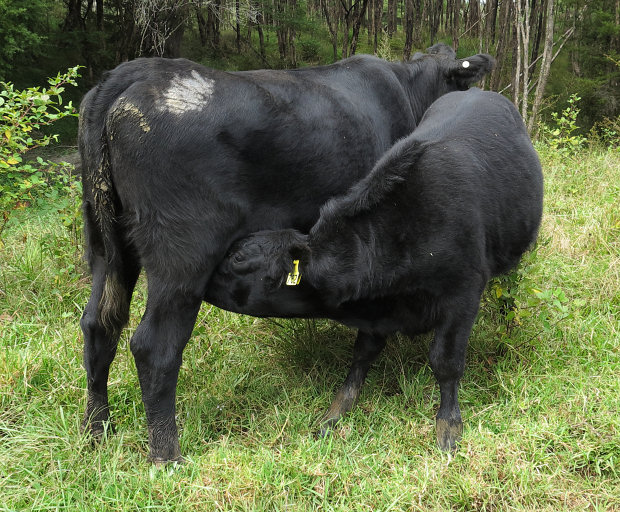 Erin 132 again, this time with her calf.  She has the worst case I've seen of the fungal rump problem.  I need to carry an iodine spray bottle out with me and see if that will help resolve it for her.  I don't observe it causing her any discomfort but I don't imagine it can be as comfortable as not having it. 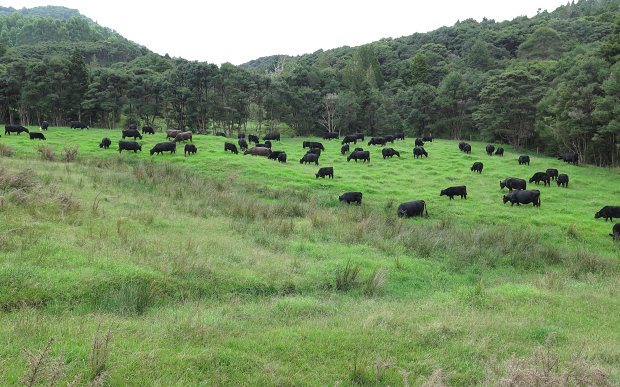 I like looking back down at the cows in this paddock - the Blackberry (formerly part of the Swamp).  It's still very much a paddock of two halves, until we get a couple of culverts in across the drain to allow the rushes and dead gorse to be mown down tidily - and for the fertilizer truck to be able to spread here too.

Here is that tiny rock melon, all grown up!

I picked it thinking it had that nice sound ripe watermelons have and fearing that the marauding chickens might end up beating me to it. 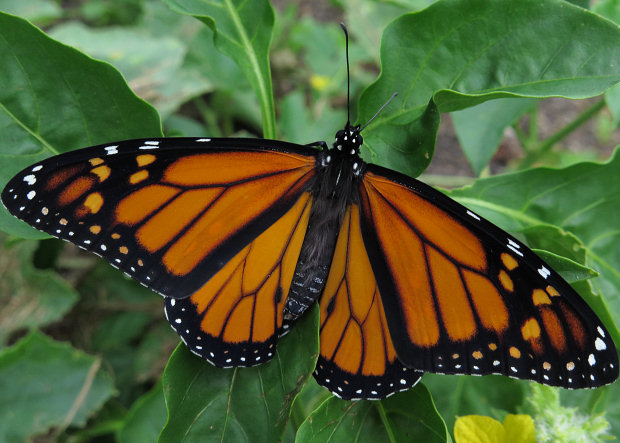 Later, in the same garden, I spotted this beauty, just emerged from its chrysalis.

I am pleased to see they've survived in our garden this year, despite the huge number of wasps everywhere. 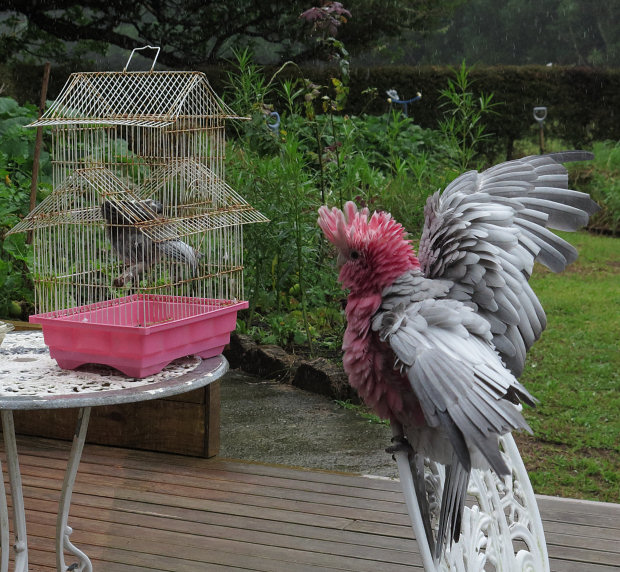 It rained lightly this morning so I put Floss outside for a shower - then thought perhaps Murphy would enjoy it too, although I confined him in his little carry-cage to stop him running away from an experience I suspected he'd enjoy if he overcame his initial nervousness.

Murphy behaved very much as Floss does, raising all his feathers so the rain drops could fall through them to his skin.

Floss's wing feathers obviously need clipping again, most of the clipped ones now having been replaced by nice new ones. 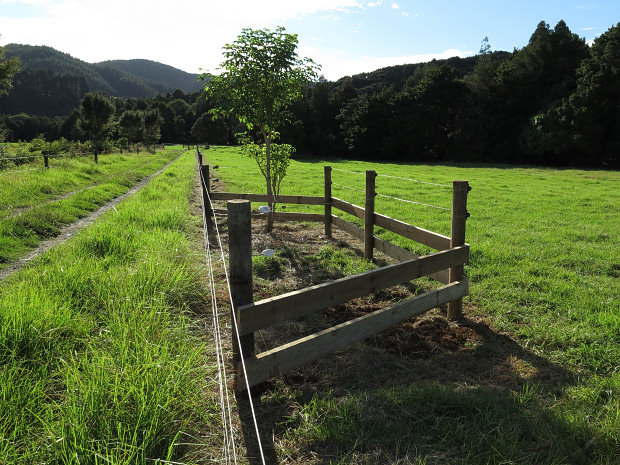 The completed sheep cemetery reserve.  We decided to try out this design with rails at the bottom to stop the sheep (if we ever have enough of them to be in this paddock again) getting in through the bottom and electric wires at the top to stop the cattle reaching over and damaging the tree(s).  That Puriri has done reasonably well despite some vicious (cow) pruning and being hit by frosts.  We'll put another tree or two in here soon. 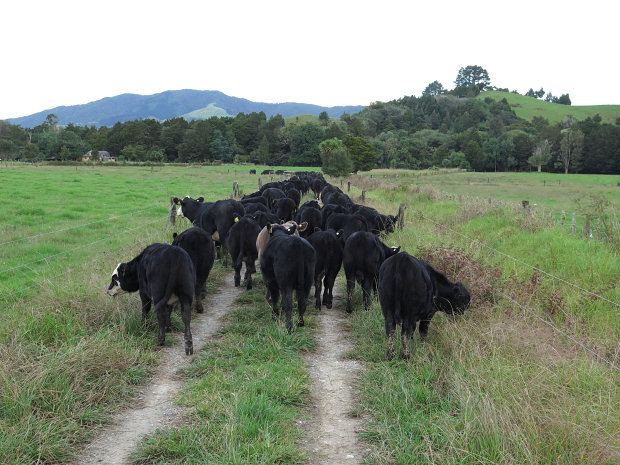 The cows and calves on their last evening as a complete mob, heading down the Windmill lane to Flat 1.  Tomorrow we'll start weaning. 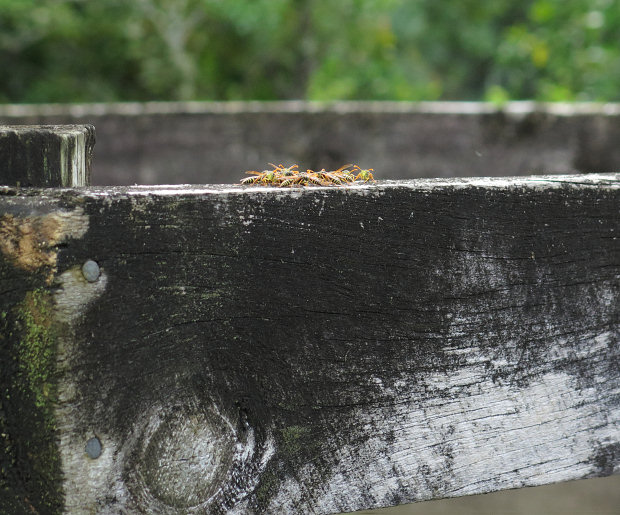 Before we started working with the cows and calves in the yards this morning, we went around checking for wasp nests!  This little gathering would have provided a nastily surprising place to lay one's hand.

They're a real hazard at this time of year, as they collect wood pulp for wherever they build their winter nests and are often on the other side of railings as we climb over the top. 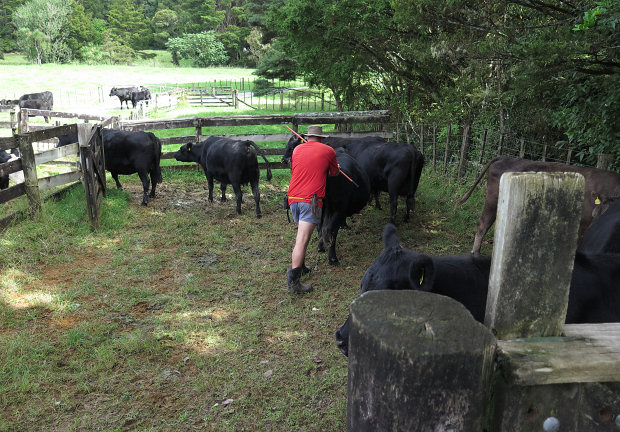 We weighed everyone, cows and calves, some taking longer to get into the right place than others.

Demelza is a tricky customer in the yards, often requiring some gentle force to get her moving in the right direction; otherwise she'll just stand there... as she just stands everywhere.  She obviously considers that the requirements of everyone else cannot possibly apply to her. 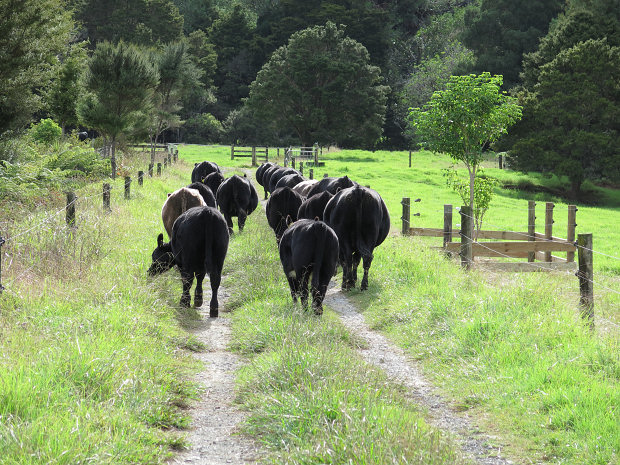 Twenty-five cow/calf pairs and the two pregnant heifers went back out to graze and these eighteen went separately up to the end of the flats... 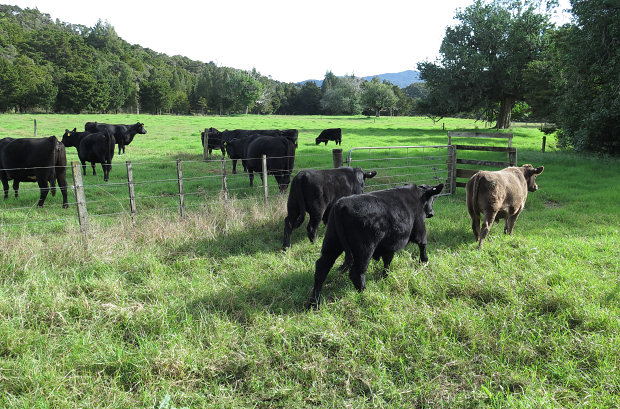 ... where I waited to open one gate or the other in this corner: the cows in to Flat 5d to the left and the calves into Mushroom 1.

I find it a really easy place to draft for weaning because the cows are very good at coming forward and going past me through their gate while I make sure their calves don't follow and then the calves want to go in what looks like the same direction to join their mothers.

It's also a great place to wean because it's quite some distance from the house and we get less overnight noise.

Once they were all drafted I set up an electric tape to allow the cows to come out of their paddock and have nose-to-nose contact with their calves along the non-electrified area of gate and conventional fence over the trough.  The trough in 5d is down the other end and some cows might not leave their calves to access it as frequently as they need, so this set-up works well.

My primary concern about today's weaning, was that for the first time ever I separated the twins, Gem and Meg.  They've only ever been apart for an hour or so in their whole existence. 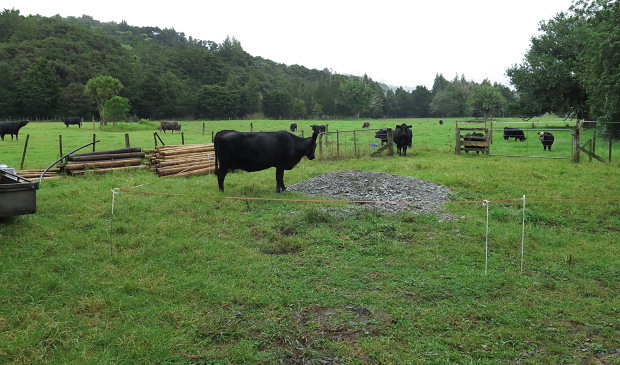 Misery.  Lots of calling this morning as the usual feed time passed.

Beyond the calf paddock I heard another distressed call, from a lone calf in the lane.  All the weaned calves were in the paddock, so this was one from the other mob, for some reason.

The calf was 799, Meg 699's son.  I couldn't see Meg anywhere.  At the bottom of the PW I found the tape gate broken, but no other cattle appeared to have come out of the paddock and I could hear the occasional call of a cow from the top of the hill somewhere, in response to 799.

I went and chased 799 back to the PW and watched him gallop up the hill in search of his calling mother and then thought about what could have happened.

I think he must have come to the front end of the PW, out of sight and sound of his mother, then heard the distressed calls of Gem, identical to those of his mother, as she called for her separated daughter.  In response, he'd broken through the tape gate (the voltage is pretty low at present), and gone off to find her.

I suspect that the two cows sound exactly the same to their calves; they certainly do to me.  I bet they smell the same too and that the calves would be happy with either mother, although they never swapped, presumably because Gem and Meg knew who was who and only fed their own.  The calves possibly couldn't tell the difference between them without the behavioural cues of their mothers.

The calves are the same as full siblings (same sire) because their mothers are genetically the same animal.  Meg is still a bit of a pain, behaviourally, but I'm very glad I've kept them; this is so interesting! 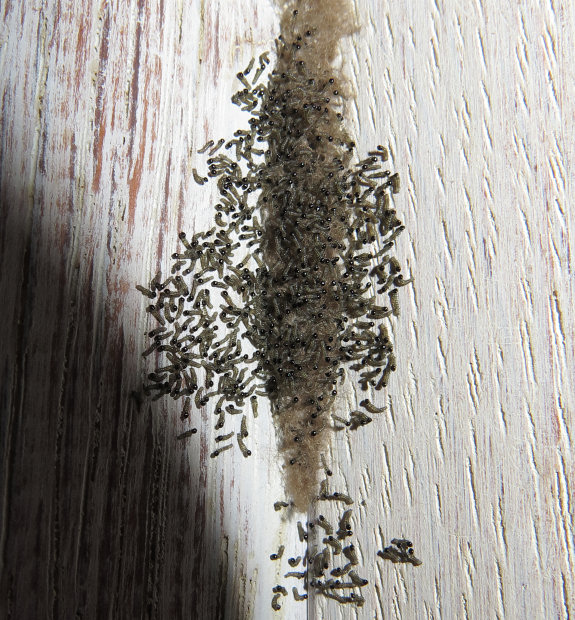 I do not yet know what these insect larvae are; I have sent out some queries.  The brown smudges of the egg casings have appeared on several walls around the house, as well as on smooth surfaces around the farm, on plastic spring-gate handles, for example.  This lot were in a smudge about 3cm long - just a little over an inch.  They're tiny. 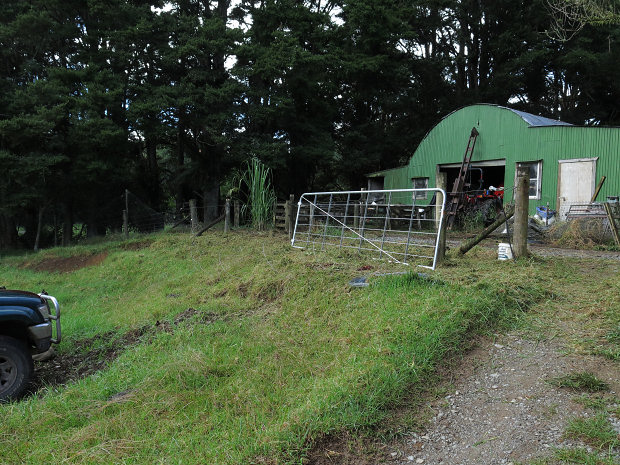 This bit of fence along in front of the tractor shed is the main feed for the electric fence and it has been an untidy mess for a while.  Stephan wants to remodel the sheep yards on the other side, since we don't have many sheep any more, creating more space for him to manoeuvre the tractor in and out of the shed.

The tall grassy plant is sugar cane.  It appears to grow quite well here.

This afternoon we went to Kerikeri to see an optometrist for a post-surgery check on my eyes.  Apparently they're looking good; just not seeing well.  I was sceptical about sufficient time having passed for an ordinary eye test to see whether glasses are necessary but she insisted it was appropriate.  I spent about an hour afterwards looking through walls of frames and then came away with the prices and time to think it all through.  I may yet need to go back for further laser adjustment to my eyes and spending a lot of money on glasses which may then not be right would be foolish. 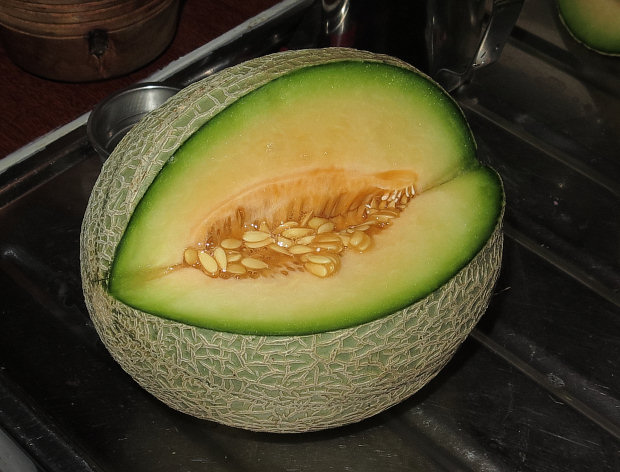 I cut open the beautiful rock melon and was enormously disappointed to discover it wasn't ripe.

[I covered it up with Gladwrap (cling-film) and left it sitting in a warm place for a week and then tried again.  By then fruit-flies had infested the seedy centre but after scraping them out, the flesh was delicious!] 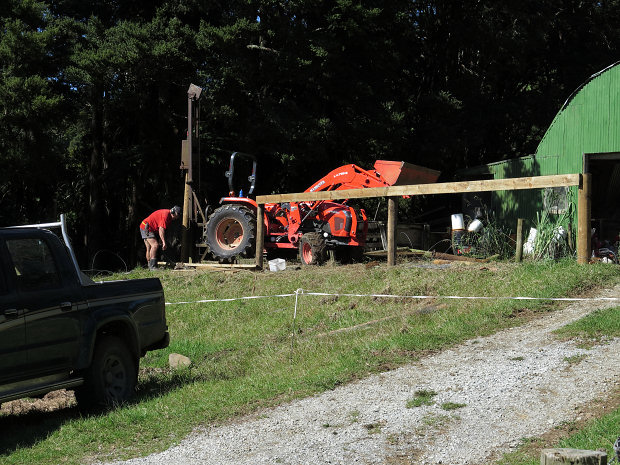 The new fence is going to have rails!

The electric feed to the farm is temporarily, and unsatisfactorily, via that white tape. 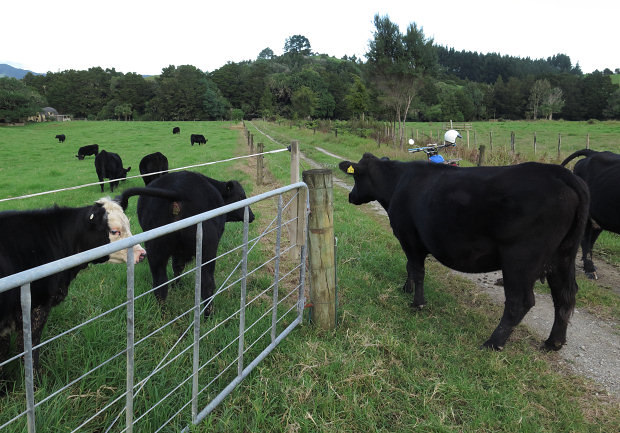 I am again weaning in groups, this year dividing the calves into four groups of nine.  I separate them, the first and second nights are noisy, the third they're a bit more settled, then on the following day I start the next lot. 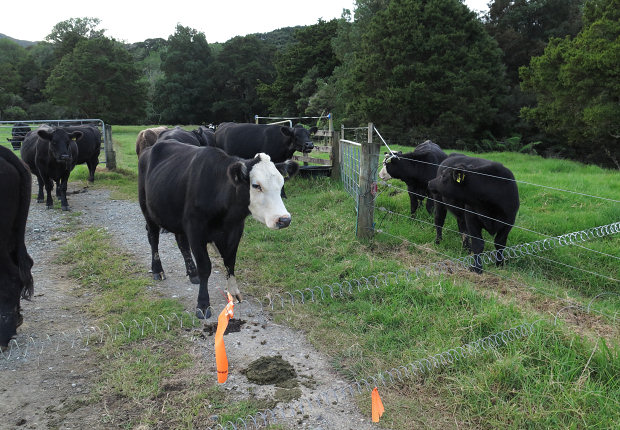 I decided to put this group of calves in the House Paddock, the grass having recovered sufficiently since the Housecows were last here.  I also didn't want this second group to unsettle the first, so it seemed sensible not to simply add them to the others.  The cows are in the small Camp area, with access out into the lane so they can share the trough with their calves.

Because the electric fence power is so low, even with two springs across the lane 718 (calling by the trough) kept walking through and away down the lane.  I think she was mostly hungry and when I later moved the cows into the Windmill, they were a lot calmer.

Usual practice when weaning is to restrict the cows' feed so they reduce their milk production.  But they are always much calmer if they're not slightly hungry and I figure their milk supply will respond to the signals which come from no longer being drunk.

In the evening we went out with a couple of very dear friends who had formerly planned to move up north but various things had conspired against their wishes and today they signed the papers on the sale of the property to which they had intended to move.  We suggested some company might be a good thing and so we all met for dinner at the Beachcomber Restaurant, now under new management.  We had a delicious meal and a lovely evening.