The week beginning the 2nd of April 2016.
Saturday the 2nd 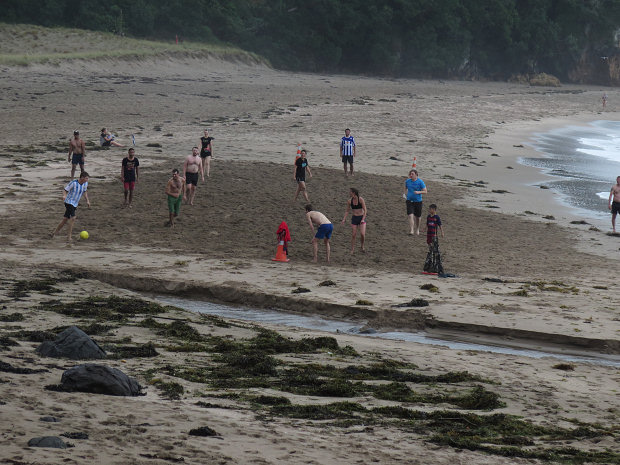 The morning was wet and misty with clearer weather forecast for the afternoon.  Many of the wedding party went down to the beach for a game of soccer.

Simon, the groom, has the ball.

In the afternoon we were all collected by mini-van and taken to the wedding venue, a few kilometres up the coast.  The weather was fine enough to use the outdoor option for the ceremony.  But after the rain, it was swelteringly hot in the sunshine and those who had dressed formally were in obvious physical discomfort!  Everything went as planned and after the business was done, we guests all walked back up the hill to the reception building while the bridal party went away for a couple of hours, presumably to take lots of photos.

Prior to the wedding all the family been asked to send in their own and any older family wedding photos.  I contemplated a conscientious objector contribution but that might have been churlish. 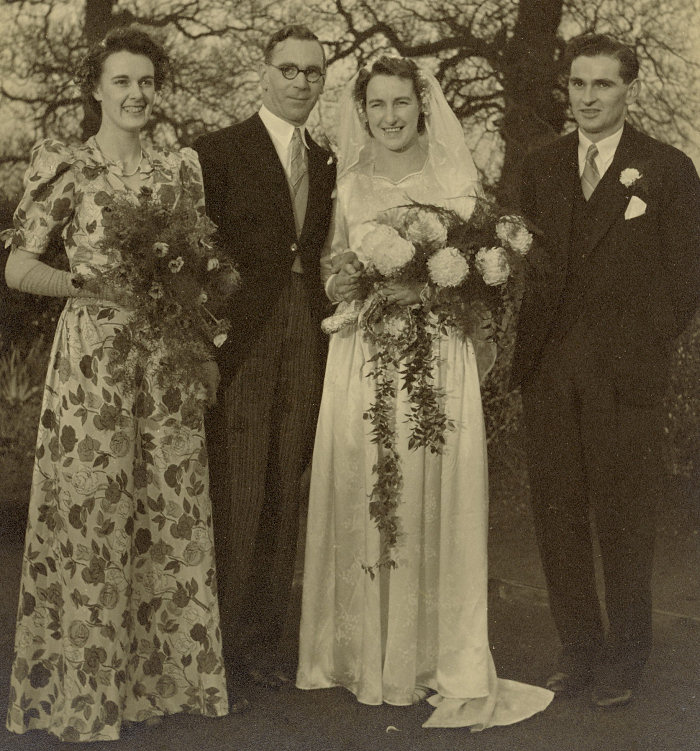 This is Patrick and Muriel on their wedding day in (I think) 1947.  Muriel's sister, Olive, is on the left; we don't know who the man is.

Those of us who are sometimes prone to "drunken aunty" antics at weddings, behaved ourselves very well.  The food was fabulous, only some of the speech jokes were sexist crap and overall it was a very pleasant evening.

As we waited for the mini-van to arrive and take us home again, the heavens opened and it poured. 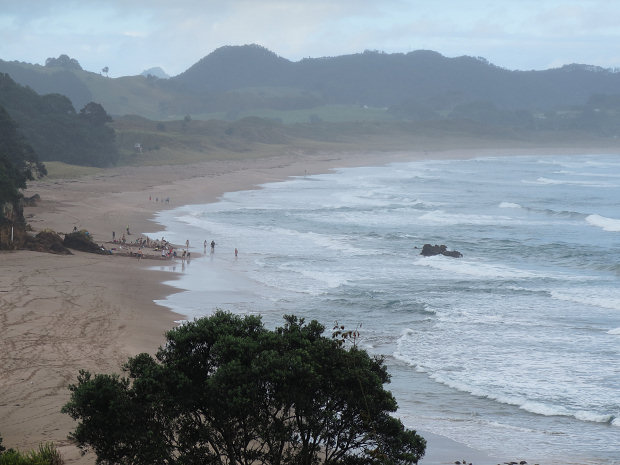 At low tide the hot water part of the beach is exposed at that rocky point and that's where everyone goes with their shovels.  Stephan was down there in the midst of it early this morning, digging and then sitting in a very hot pool, before going for a cooling dip in the sea.

I decided to stay away from sand and other potential eye irritants.

I've been to Hotwater Beach once before, when I was about 18, one of a party of drunken youths travelling around in a Holden Station Wagon.  It was Labour Weekend and as is traditional, it was raining.  We spent the long weekend travelling around the Coromandel, sleeping in tents which were flooded in the middle of the night and drinking sufficient alcohol that it didn't matter.  Our driver was a relatively sober and sensible sort, fortunately, a generous host who would have enjoyed everyone else's enjoyment without necessarily having to take part in the imbibement.  I hardly remember this beach at all but I know I helped dig a warm water hole and sat in it. 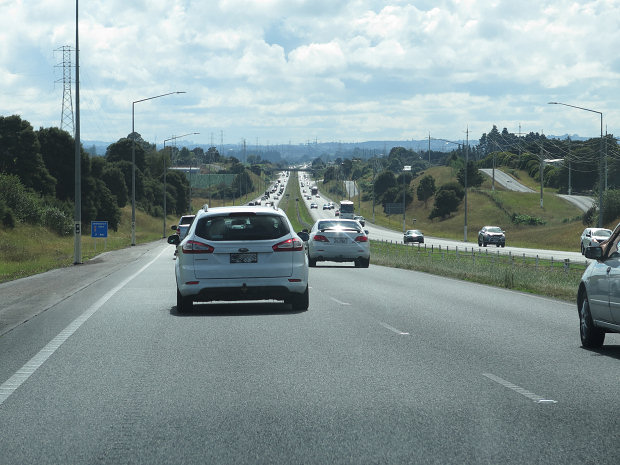 After brunch for all the wedding guests, we set off for Auckland, with Jonathan and Char-Lien in the back, since they were travelling to visit friends just north of Auckland.

We'd expected a slow trip but other than the occasional slight and inexplicable delay, made good time.  Even the Auckland motorway was moving freely and we were home at about six.

Everything had gone well for Bernie and it appeared he'd had an excellent time of it all and would like to carry on for the rest of his stay, thanks very much. 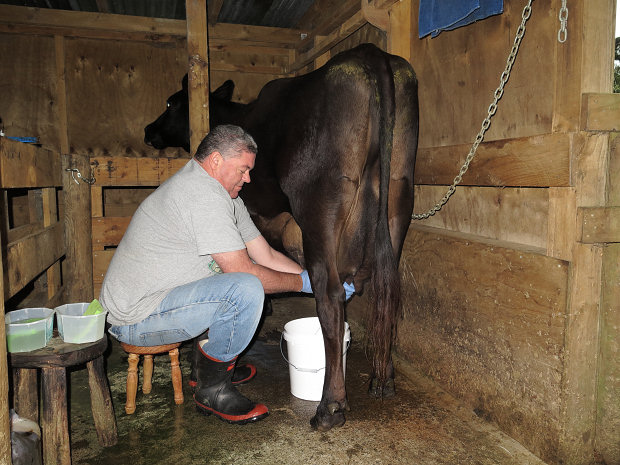 Stephan slept in and Bernie got the cows in and milked them.

I took his photo and watched for a while as he milked: the skill he'd developed as a teenager had obviously stayed with him and he milked even faster than Stephan!  (Fast is better for the cow than slow.  Bernie got as much milk as Stephan does; I get only half in twice the time; anyone slower than me gets even less, because Zella gets sick of it and wants to leave.) 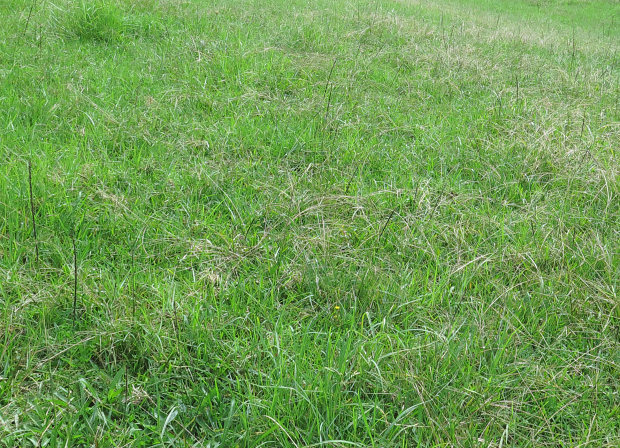 Bernie and I went for a walk out to the Bush Flat reserve, where the greatest variety of native trees grows together.  We walked across Mushroom 3 and I noticed how much Rattail grass is growing here!  (The tall, black seed stems are Rattail.)  I've killed a lot of it in several places around the farm but it looks like I may not have done enough and it has really got away here.  I wonder if there's a particular soil fertility profile which suits it very well?  I don't think there's nearly as much of it down on the front flats. 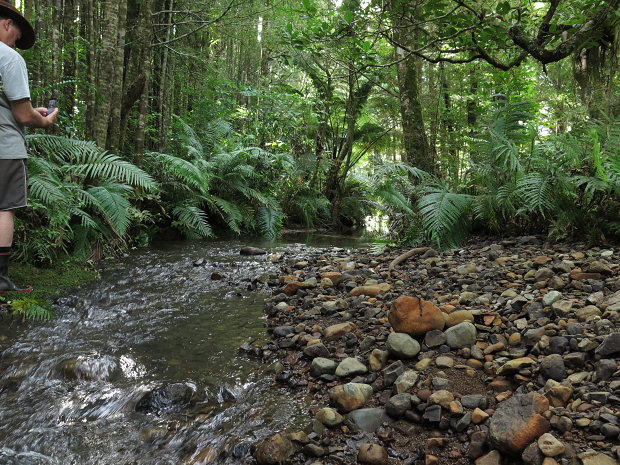 This is such a beautiful part of the farm.

To the left is the thickly growing stand of Kahikatea trees.  There are many other species in there too but Kahikatea are the dominant species because a lot of the ground is wet, which they like, with little tributaries running in from the Buselich Reserve next door.  Our bit of reserve has now been fenced off from the cattle for almost eight years. 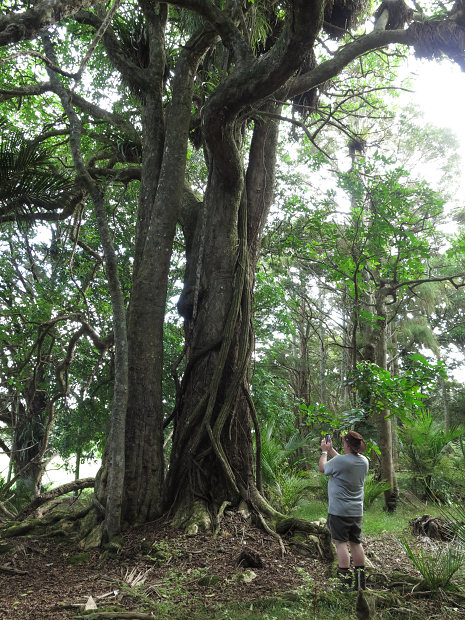 It's hard to capture the enormity of these Puriri trees in photos but when one stands beneath them, the bulk of their trunks and branches is impressive. 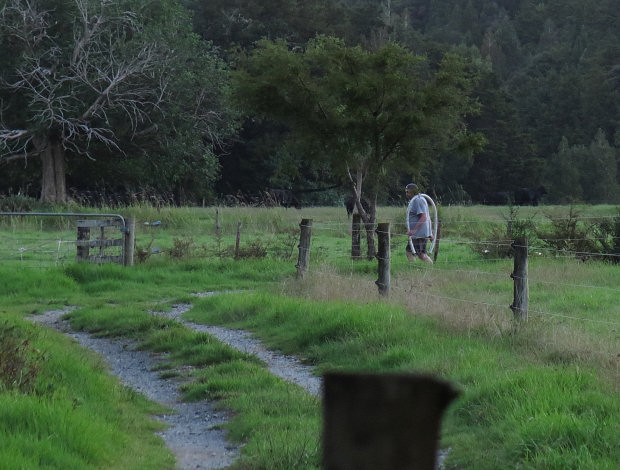 While I got on with tidying up the aviary and feeding all the birds, I asked Bernie if he'd mind going out and sucking the muck out of the trough in the paddock into which he and I had earlier moved the main mob of cattle.  He was gone for ages and eventually we spotted him going from trough to trough, doing nearly every one he found across the flats.  Playing with water is excellent fun. 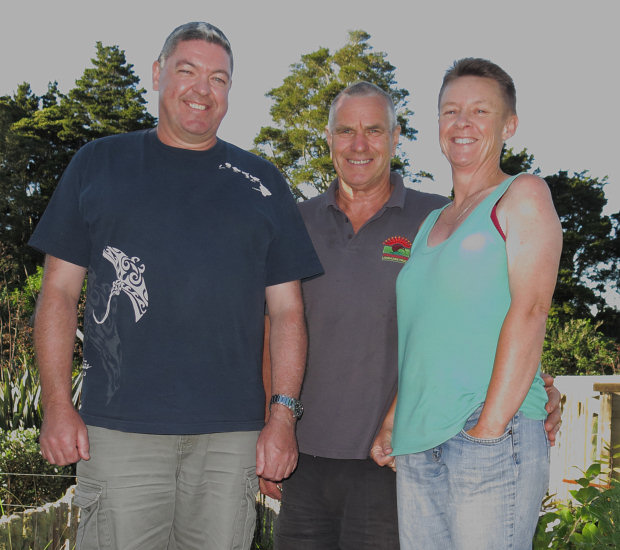 Unfortunately I didn't take a very good picture of the three of us.  Bernie is off very early tomorrow morning so we took photos this afternoon. 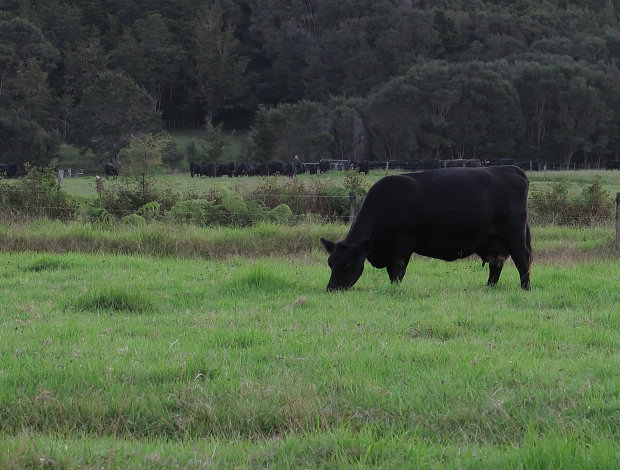 And then he went off across the flats for one last cow move, from Flat 3 to 4.

We drove to the airport to put Bernie on the plane at 6.20am.  Then home to get on with all our own work again.  What a shock!

We really enjoyed meeting and spending time with Bernie and especially enjoyed his enjoyment of the farm and the animals.  It was a marvellous thing to be able to get away with so little worry.  I asked Bernie if he'd like to contribute his own farm diary for the weekend and will insert it if he decides to do that.  We also asked if he'd like to come back again next year! 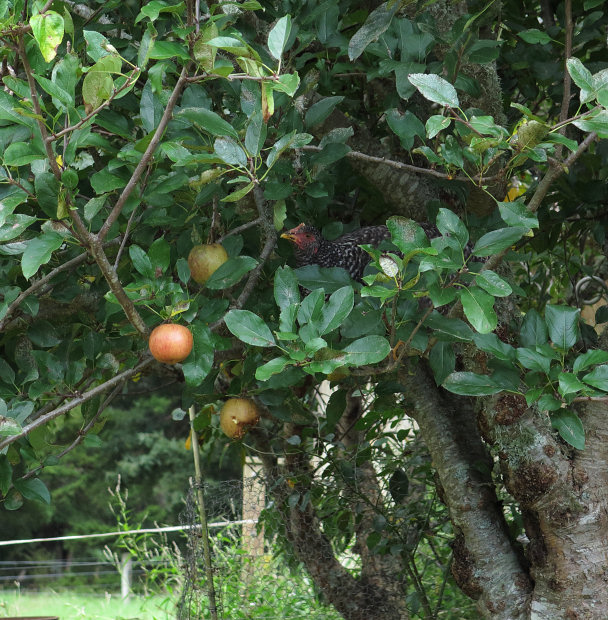 I spent the day (the next many days, actually) nursing a cold I must have picked up over the weekend.

Half-way through the afternoon Justine and her daughters, Sophie and Annabel, with friend Robyn and her son, Caleb, came for swims and a look around the farm.  I like catching up with Justine.  We both have similar feelings about our mothers, something apparently not shared by many people.  I actually get on well with her mother, although it's easier if I don't have to negotiate those quite different relationships in the same company.

As we sat beside the pond while the children swam, Floss sat up in the Sebastian Apple tree.  One of the young hens kept flying up into the lower branches to get to the remaining apples. 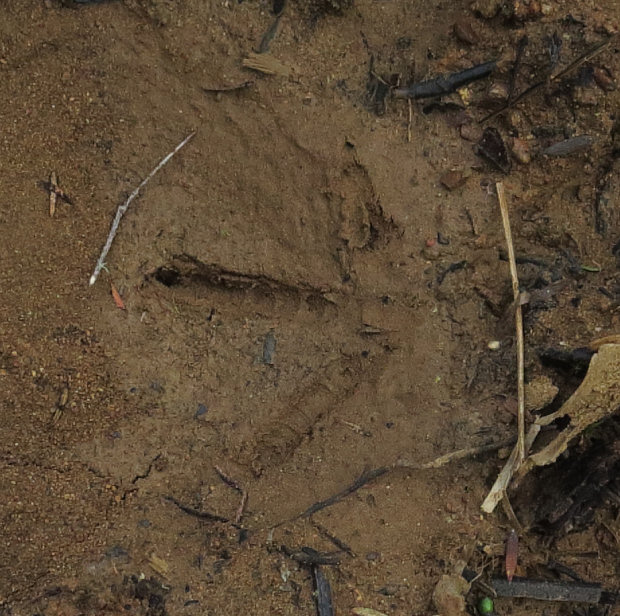 After some swimming we put everyone on and in Roger's ute and went for a drive out to the back of the farm where we found a Kiwi print in the sandy gravel near the stream.

I love finding these footprints, with all the wrinkly detail of the sole of the bird's foot.

Electric fencing is quite fascinating for city children - and some of their parents as well.  We all picked bits of grass to hold on the fence to feel the tingle as the pulses went through the wires - except we didn't feel anything.  Stephan tested the fence on the way home and discovered it's not even on out here at the moment: more fault-finding is obviously necessary. 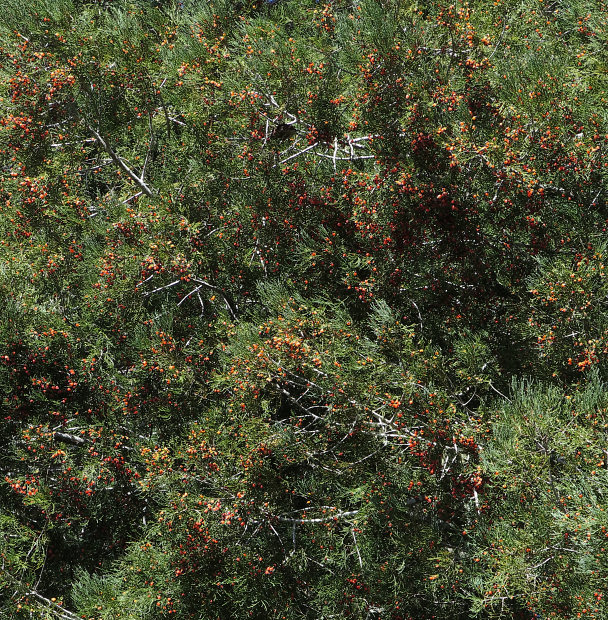 Beautiful Kahikatea berries, making many of the trees appear brown from a distance. 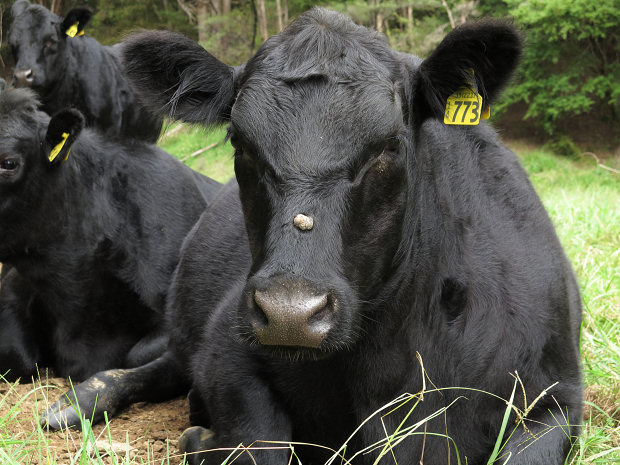 773 is growing an impressive wart on her nose. 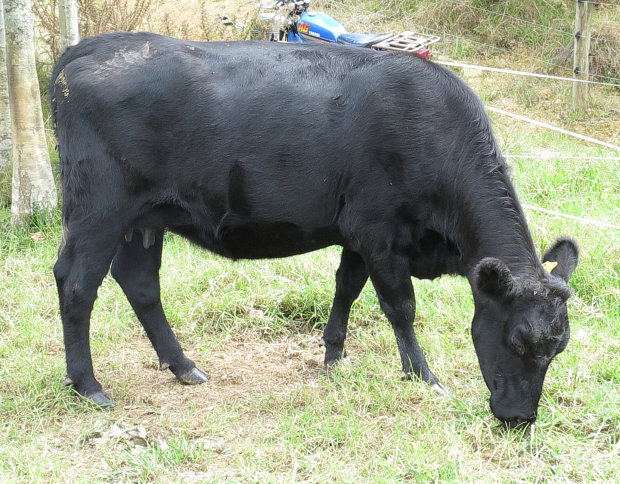 I haven't quite decided what to do with Erin 132.  She's quite slight at the end of a season rearing a very big calf but I'm worried there may be more to her thin appearance, after the odd event she suffered late last year.  Should I keep her or send her to the works, I wonder? 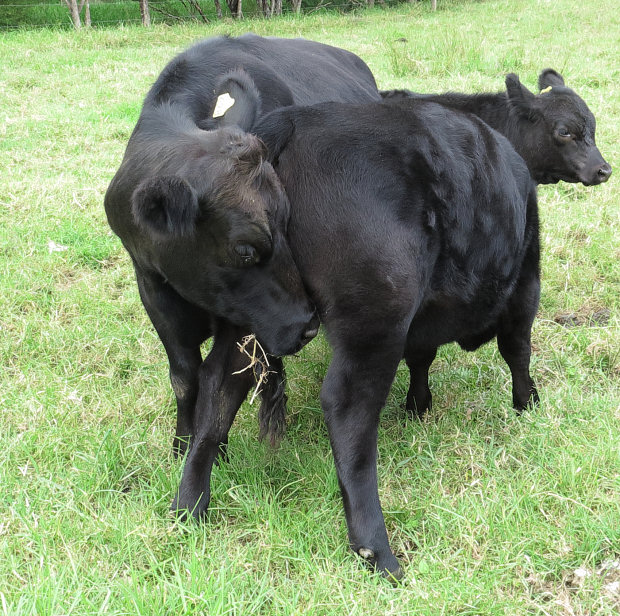 This is an odd photo, making Gem 698 look weirdly insignificant as she feeds her monstrous daughter, 781.  The spare head in the background doesn't make it any less weird.

I'll have to start weaning in the next few days.