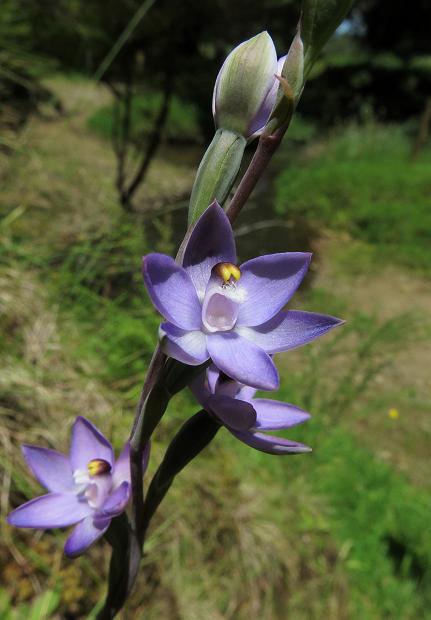 I waited the advised 24 hours after my anaesthetic yesterday before setting out on the bike to have a look at the orchid plants I pictured last month.  I was very glad I did, finding them blooming in the warm early-afternoon sunshine. 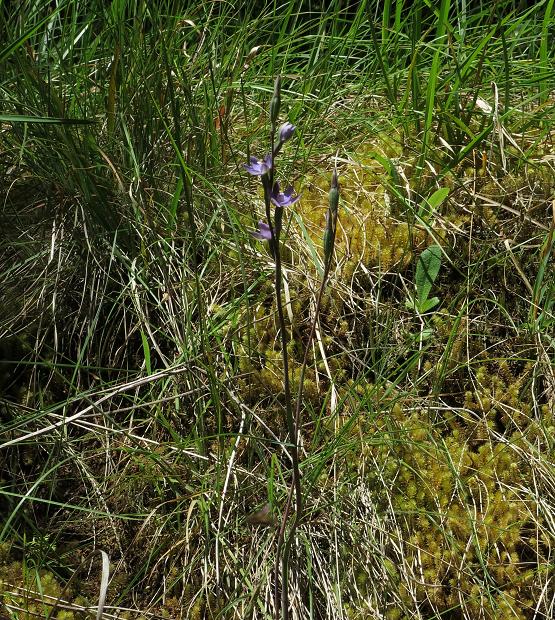 Even when they're out, they're pretty hard to see unless you're looking for them.

The flowers on the other plant have already bloomed. 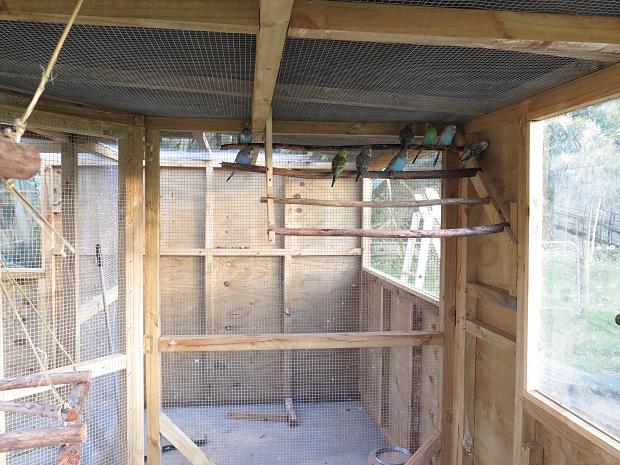 Stephan, having bought some second-hand iron in town yesterday, roofed the western arm of the new aviary and once he'd finished and installed some perch framing, I prompted the birds to move from the other part while Stephan carried on with the rest of the roofing. 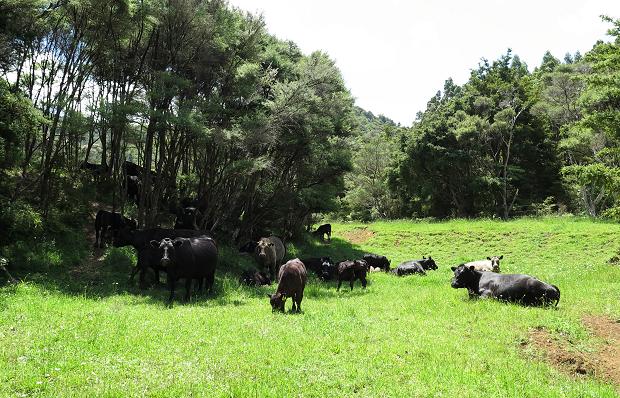 I had a lovely day, firstly spending some time bouncing around in the big spreading truck with Ryan while he put lime on some of the flats paddocks.  Later I went out with my brush to check on the cattle in the Spring paddock and stood quietly brushing the muck and mud out of Eva's and Ellie 119's tails.

Stands of Kanuka trees provide lovely cool shade in which to stand or sit and it is a very pleasant thing to spend quiet time with the cows there.

Stephan had been complaining about the hazards of milking cows with hugely daggy tails, Imagen's in particular.  While he milked Zella, I got a bucket of water and began soaking and breaking up the hard lumps of manure which made Imagen's tail a clattery, splattery assault weapon if she flicked it around during milking.  By the time I finished I had bits of muck all over the place and my hands stank, but it's a meditative sort of task I always rather enjoy.  I didn't get it all out on this attempt, but made her tail switch a great deal lighter and should be able to brush the remainder out when it's dry.  While Stephan milked Imagen and Zella fed her son, I used several buckets of water to soak the muck and stickiness out of her switch and brush it out cleanly. 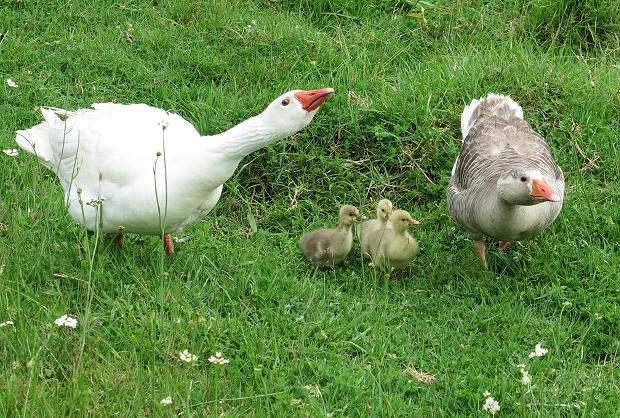 The goslings are very sweet but their parents are not. 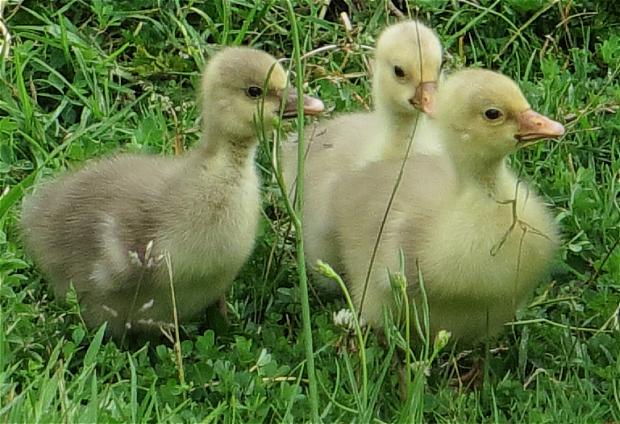 Here's a blow-up of them from the same photo. 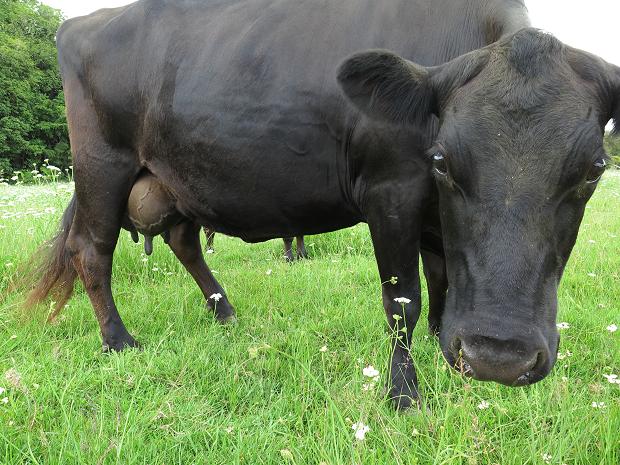 On my way out to check the other mobs of cattle, I stopped and hopped through the House paddock fence to attend to Zella's and Imagen's tails again.  Imagen is now free of muck and Zella's is a pleasure to brush with its long waviness, now that it is clean and silky.

I crouched to take a full-length photo of Zella but she turned instead to investigate what I was doing. 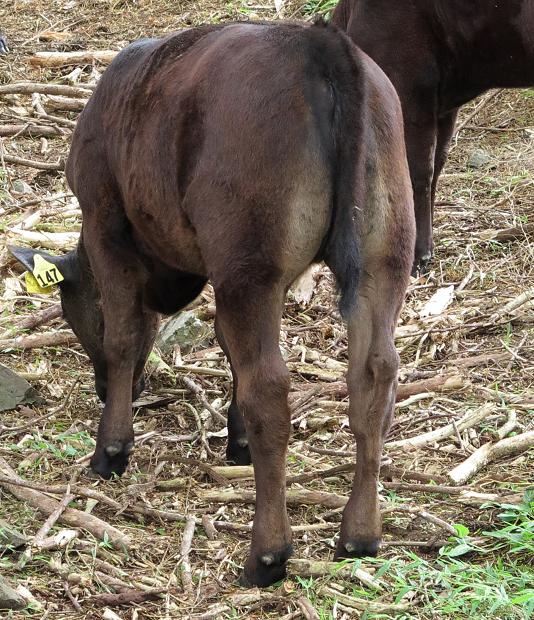 Out the back I found several of the cows and calves together under some big trees in the cool shade and did some more brushing.

I took this picture because Eva's daughter, 147, has such a nice bum.  I like those wide-set rear legs which allow for lots of muscle expression. 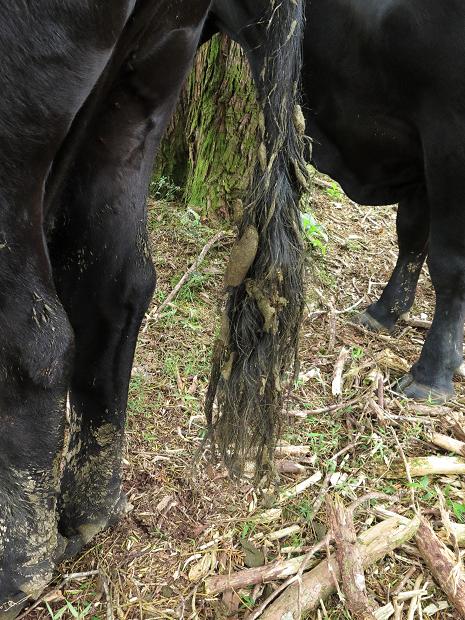 This is 613's example of a slightly daggy tail (I'd already started pulling the clumps apart before thinking about taking a picture).  The easiest way to tidy it up it is to bend each long clump to break it a bit, then grab the hair below the clump, divide it in half and pull the two halves apart, splitting the clump upward toward the tail.
Then it's just a slow job of gradually pulling the dry muck from the hair, splitting the knots and brushing it all out smoothly.  The cows don't mind, as long as I don't pull their hair too much. 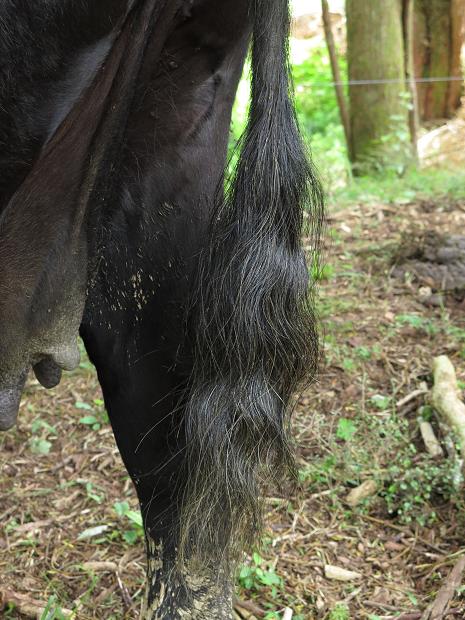 We both benefit: for me it is an opportunity to play with long hair (since I'm not the Prime Minister with his special self-nominated privileges) and for the cows, their tails are returned to efficient fly-swatting devices and I often find and remove ticks which climb into the switch and attach themselves to the skin at the base of the long hair where the cows can't easily scratch them off.  When free of heavy dags, the tail is also easier for the cow to lift out of the way of further messy deposits.

Felled by a terrible headache, I spent most of the day in bed.  Headaches are horrible things and I have far too many of them! 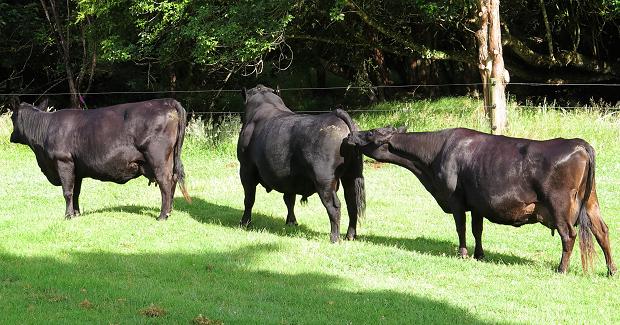 Zella produced only half the usual quantity of milk this morning and I wondered if she might be coming on heat.  I put them in the Windmill Paddock and then went up to draft Mr 87 out of the bull mob and in with them.

He spent several minutes checking both cows, sniffing and licking and extending his head in the Flehmen reaction.  He seemed most interested in Imagen, but Zella was pretty keen to check him out. 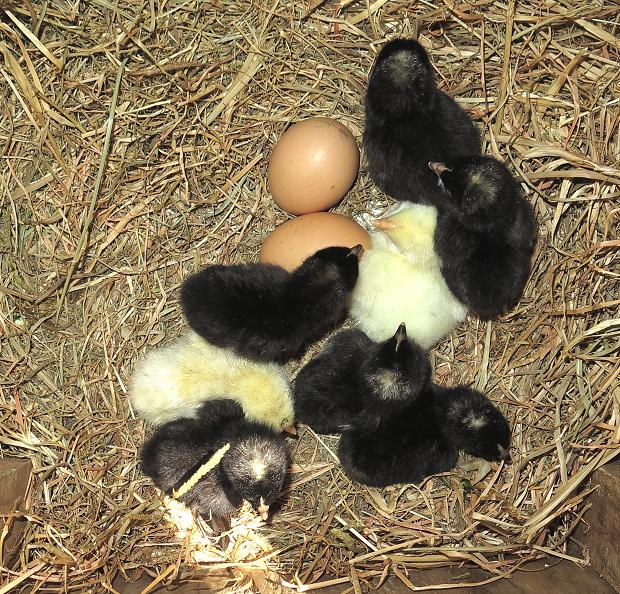 We have chicks!  Eight of the ten eggs set have hatched, six black and two white chicks. 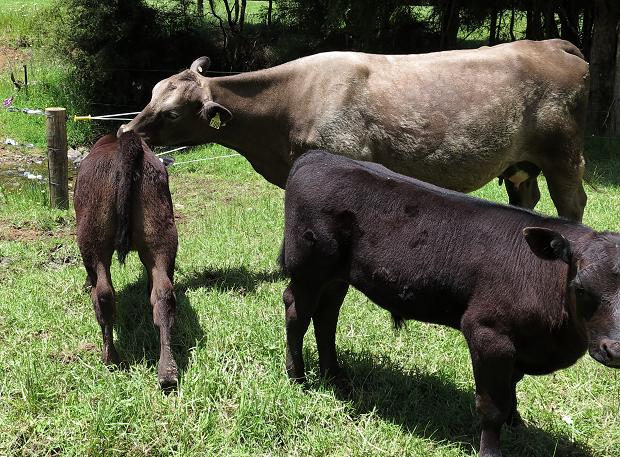 Endberly still looks quite slim but that neither worries nor surprises me, she being four and a half and this being her third calf.  She is healthy and holding her condition well enough and as she matures she will retain more condition throughout the year.  I write this with confidence, her mother and grandmother both being easy-keeping cattle, animals which, even when feed is a bit short, remain relatively round and smooth. 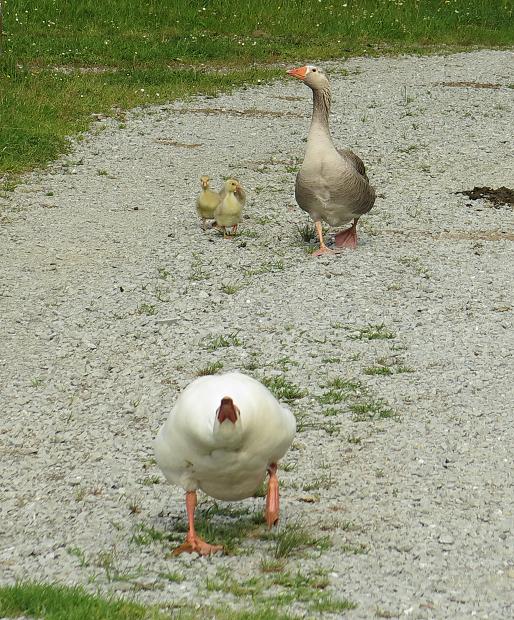 Mr Goose in full-speed attack mode.  I tire of his behaviour.

Early this afternoon I checked on the cows and calves in the Spring Paddock, thinking they'd be due a move to the Middle Back.  I always do a roll check first, to make sure everyone is there (which they were) but having noticed Erin 132 looking uncomfortably hunched when defecating, I then saw her move in an unusual manner into the shade of the trees where she lay down and started kicking at her belly.  As I checked around the rest, she got up and down again, looking worryingly distressed.

I dashed back home, setting up the lane as I went, called the vet to come out and then went back out to get the mob in to the yards.  On my return I found Erin lying apart from the others and wondered if she could even get up!  She did and followed the others in to the yards, even trotting a little at times when the rest of the mob got too far ahead. 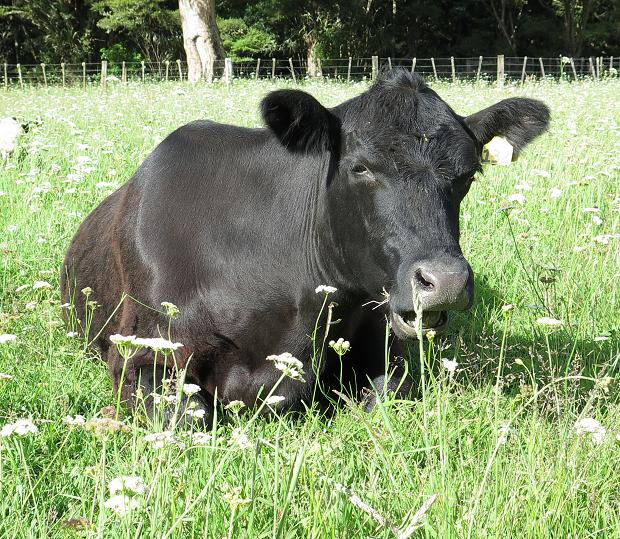 The vet examined her, said there was a 'ping' in response to his tapping on her skin while listening with his stethoscope, indicating an area of trapped gas on her right side which could indicate either a passing problem or something which would kill her within hours and that in either case we were probably best to wait and see.  He suggested it could be helpful to give her some pain relief, so did so.  We also took a blood sample to check for any underlying issues and let her go.

The only other cow I've seen showing similar distress was 604, whose pain I was unable to relieve in a timely manner, despite repeated vet visits.  If this was a similar sort of thing, I wanted to know about it as soon as possible so we could do whatever was necessary.

I checked on her regularly for the rest of the day, during which she appeared to be either grazing normally or sitting ruminating.

Over the next couple of days she looked slightly unwell but continued eating and her calf seemed contented enough, so her milk production cannot have been affected by whatever ailed her.  The last sign of the problem was a smelly smearing of faeces all over her rear two days after the pain.  I don't know whether that indicated the passing of something which had upset her or was simply a result of the physical interruption to normal gut activity.  She has continued normally ever since.  The blood test showed nothing unusual.