Stephan went up to fix the water; then it rained more and the system stopped again. 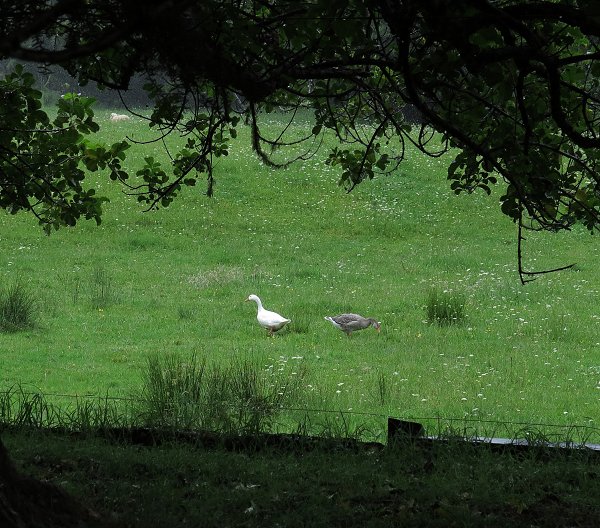 I'm very happy to see the geese starting to venture out into the paddock further and more often.  They defecate frequently and copiously and the back lawn is a hazardous place to walk because they spend most of their time there, chattering to me through the windows. 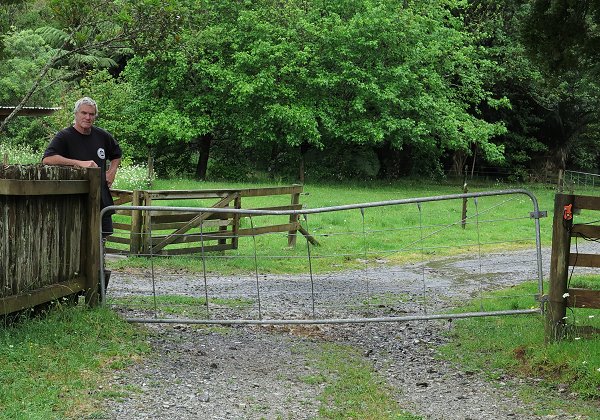 Zella and Imagen mooed throughout the night.  It was their second night separated from the calves, so it seemed a bit odd that they'd protest quite so much.  It was also raining.

Being unable to sleep, I was washing dishes when I heard an odd noise outside just before dawn, then a moo from the wrong side of the house: Zella had crashed over the high steel gate at the end of the lane and headed out across the House Paddock.  That's extraordinary behaviour from our usually placid and well-behaved house cow!

I worried that she could have injured herself, but when she came in for milking she was fine.  I think she may be on, or coming on heat. 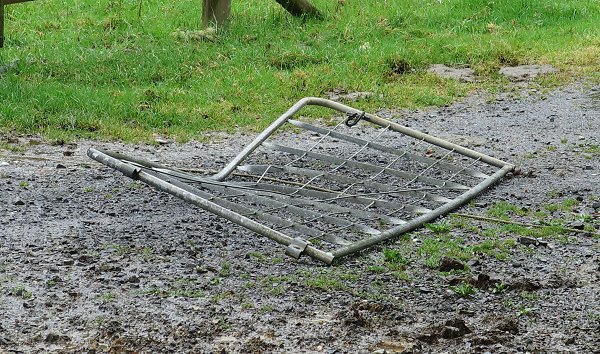 When Stephan lay the gate on the ground, the damage was even more obvious.  He plans to run over it a few times with the tractor to straighten it out. 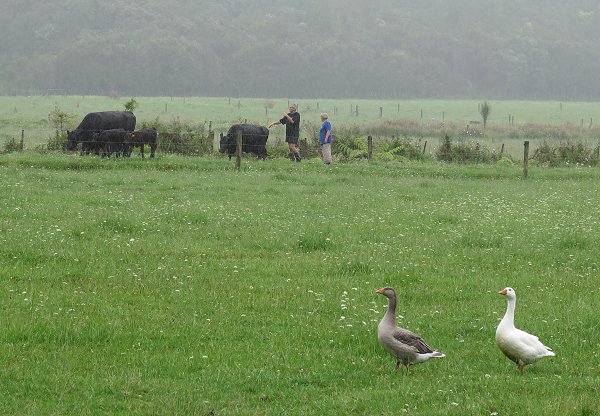 The rain is being a bit of a pain now.  It seems churlish to complain about rain in what was forecast to be a drier-than-usual December, when too much dry weather can become very worrying, but after over 150mm in the last four days, we've actually had enough for the time being!

Friend Gillian came out for dinner and she and Stephan set out in the warm evening to get the house cows in and while they were as far from the house as possible, the rain started again and they both came back wet. 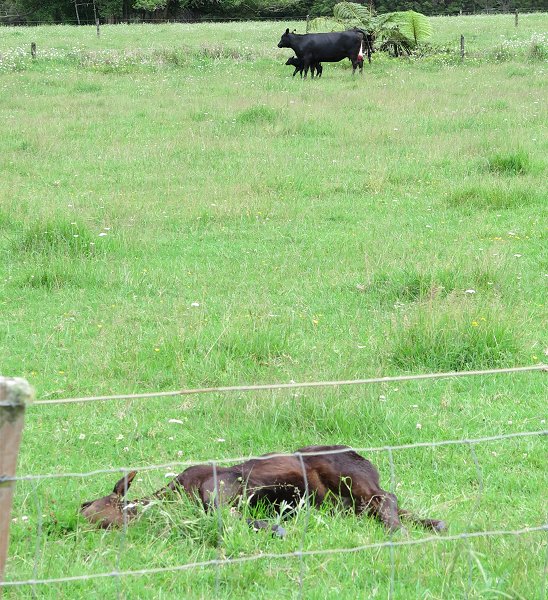 Julia Caesaris is dead.  Her mother was bellowing this morning so I went to check and thought Julia was asleep, except she didn't respond at all when I called to her.  She's had a case of scours (diarrhoea) for a few days, but I'd put that down to Coccidiosis and was keeping an eye on her, making sure she was still feeding and not looking sick.  She didn't look very perky yesterday evening, but I wasn't alarmed by her appearance.

Feeling very bleak, I nearly put off a visit by the stock agent who was coming to look at a couple of heifers I want to sell.  As I was waiting for his 3pm visit, Emma was in labour and had produced two feet just as the guy arrived.  I figured she'd probably take about another twenty minutes, so went over to the yards with the agent to discuss the cattle and ran back when he left, just in time to see the calf drop to the ground from a standing Emma.

All was well with this last calving, the 21st live bull calf for this season.  I really thought this one might be a heifer, to even out the sex proportions.  We've ended up with 21 bull calves and 12 heifers.

I'm very sad about little Julia.  At the beginning of her life I thought we'd been lucky to save her.  She has appeared quite healthy, gaining weight and size, but has rarely been as active as a normal calf.  In the past few weeks I've begun to wonder if she was really a late abortion inadvertently rescued, a calf being expelled because of various unsurvivable defects.  Something was not all right with her.  I contemplated doing a post mortem examination, but concluded that due to her general ongoing health, I'd be unlikely to find anything telling, so left her uncut.

In retrospect I realise I ought to have checked her liver, to ensure the navel ill infection I treated in her first few days wasn't the eventual cause of her demise (such infections cause abscesses there).  Checking is always more informative than not doing so, but sometimes some things are simply too hard to do. 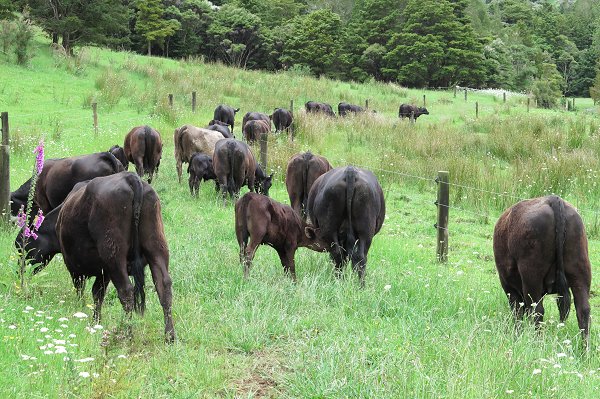 The heifer mothers are in varying condition, mostly looking alright.  Now the grass will really start growing and they'll be able to consume more than they need and put on some condition as they approach mating time again.  I am very glad we've had rain! 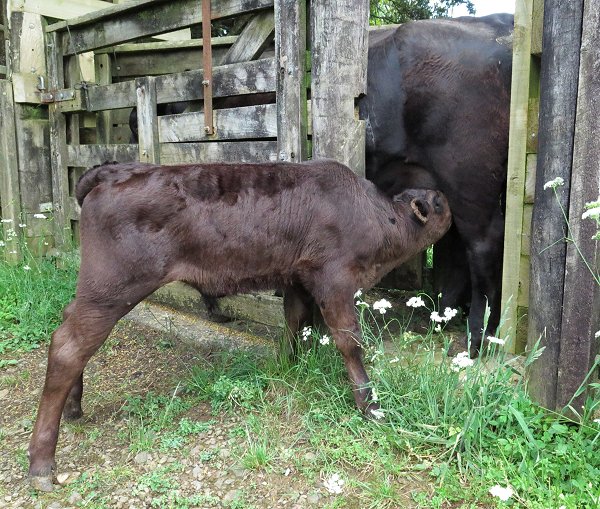 We decided to try and get Julia's mother, 721, to accept and feed our orphan, 765.  We put 721 up into the head-bail area (where she wasn't very keen to go after the c-section and then all the injections) and led 765 to her udder.  He's a very keen feeder, so didn't take much prompting to latch on and empty her udder.  Bearing in mind how slow he is, he also didn't take very long, so I gave him a couple of litres in the blue feeder afterwards as well. 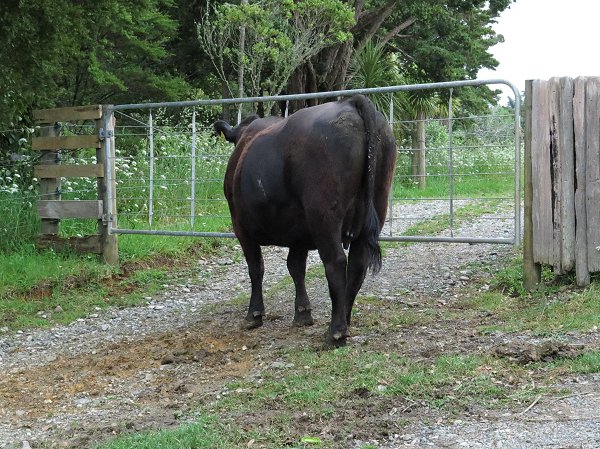 This is 721 standing beside the gate Zella jumped over.  721 is a smaller animal, but that's still a pretty high gate to jump, with the slope on this side making it even more difficult.

Stephan has done a good job getting it mostly straight again.

I've concluded that Zella must have been on heat, prompting her to jump over the gate and away from her calf.  Her behaviour during milking was a bit off as well, although I saw no other definite signs of oestrus. 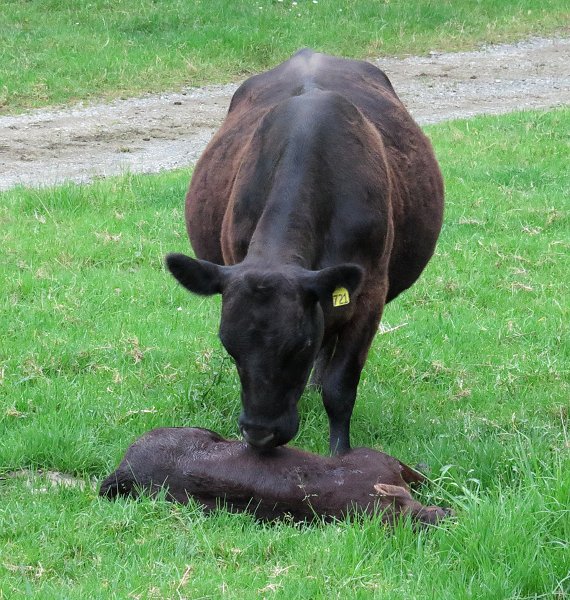 We took the wheelbarrow out to Flat 1 to bring dead Julia to where her mother would spend the night, since she kept calling out to where she was lying.  Cows grieve and it seems best to let them do it in their own time, or they can become difficult to manage. 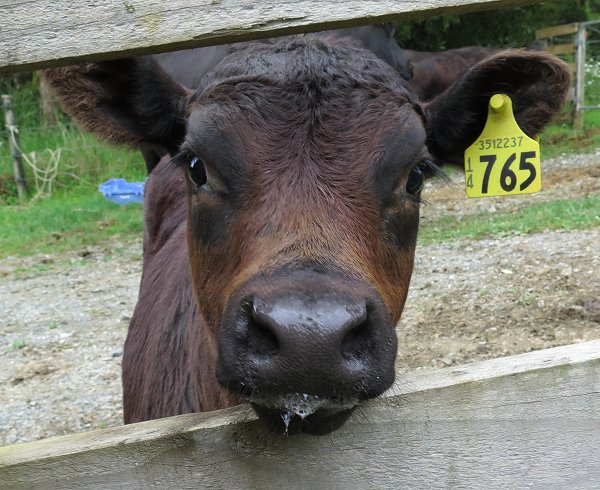 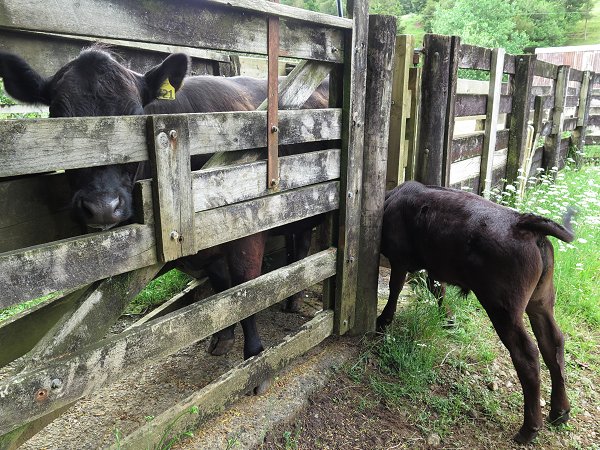 The head-bail area works quite well for this job: put the cow up the race, close the vet-gate behind her, then gently pull the right-side gate across and tie it so the cow is in a wedge-shaped area, which causes her to step back to the vet-gate, putting her udder in an accessible position for the calf.

The vet gate is a small gate the width of the race just behind the head-bail area, which opens in the side of the race and closes across it, allowing a vet to step in behind an animal to examine it without any risk of the next animal in the race coming up behind. 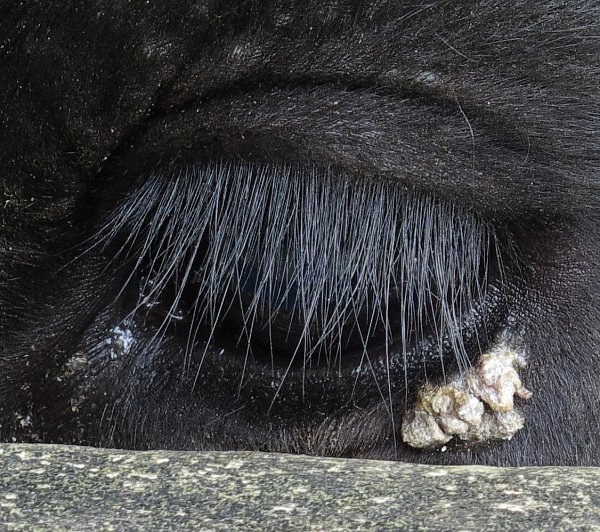 While I was standing so close to her head, I took a photo of 721's now-reduced wart.  I rarely do much about warts on the cattle, since they're generally a bit like teenage acne, limited by time.  I took a picture of this wart at its largest in August. 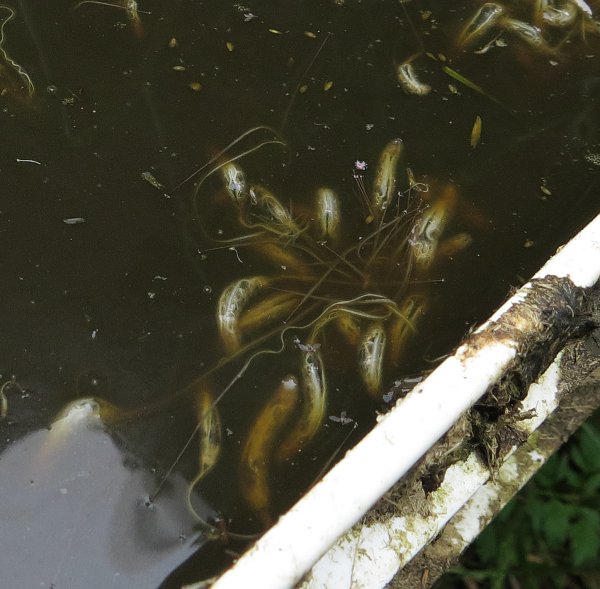 Stephan collects cow manure in a bucket which sits near the cowshed (to put on the banana plants).  With all the rain, the bucket is now full to the top with dark and nasty-looking water and these gorgeous maggots have appeared.  They're rat-tail maggots which grow into drone flies.  I think it's rather delightful that the larvae live in the most disgusting environments (their long tails are breathing tubes) yet grow up to be insects which look like bees and spend their lives visiting flowers. 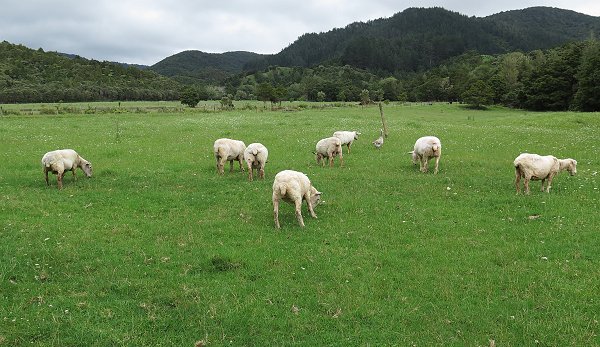 The sheep being dry enough to shear, Stephan did them this morning.  Many of them are very fat. 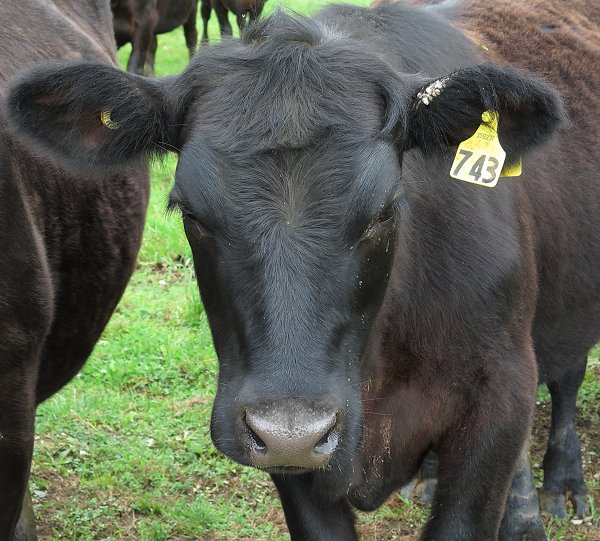 743's ear is less warty than it was in September.  Oddly, several of the others have warts in the same place, only on their left ears. 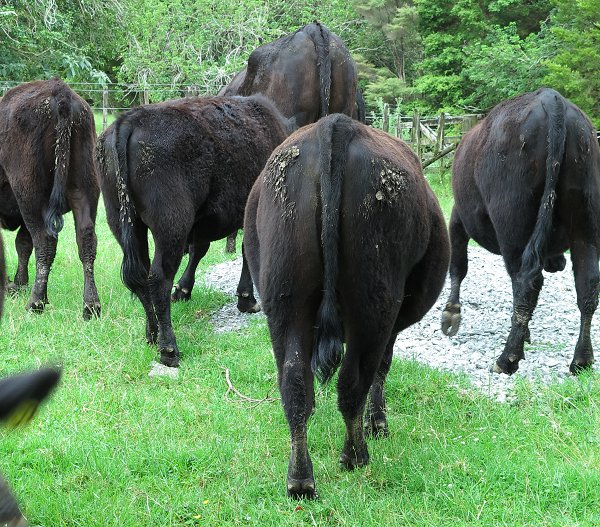 As I followed them along the lane, I kept noticing the thickness of the rear of this animal and trying to see her tag to identify her.  To my surprise it turned out to be 743.

As a smallish daughter of a two-year-old heifer, I hadn't realised she'd grown so well - although as a daughter of one of the youngest heifers, her genetic heritage is potentially better than that of some of her herdmates.  She's the only daughter I kept from Kessler's Frontman last year. 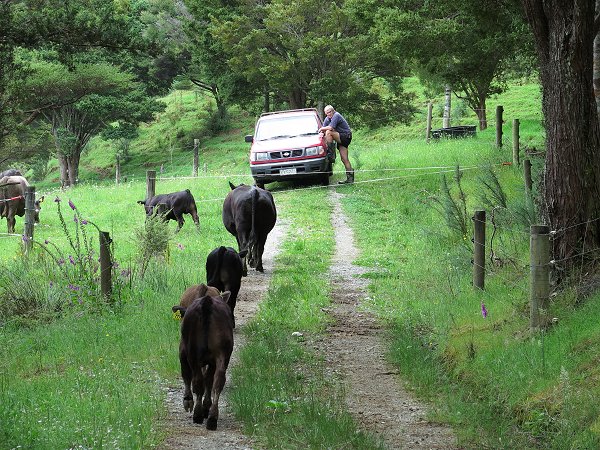 Bringing the cows and calves from the Back Barn paddock, I was surprised to find Stephan waiting on the track for the last of the calves to go into the Frog paddock.  He was about to go and fix the water, again, but I pointed out that as there was yet another heavy rain warning being broadcast, he might as well wait a couple of days, or he might have to go up a third time.  All the cattle had access to stream water if their troughs failed to fill from the tank. 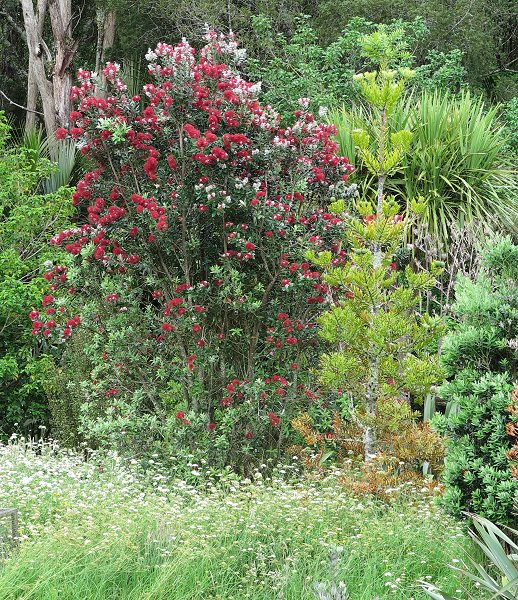 Our Pohutukawa is looking fabulous, although the constant rain will begin knocking the red filaments from the flowers before long.  This is probably about the best it will look this year.  It's a glorious crimson; some years it is a slightly washed-out colour a bit closer to pink.  I've often wondered what makes the difference? 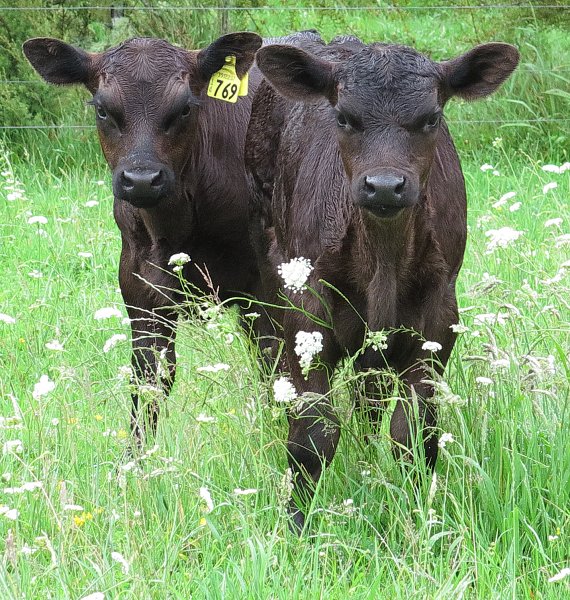 The untagged calf is Gem 698's huge son.  The other calf is almost three weeks older than him! 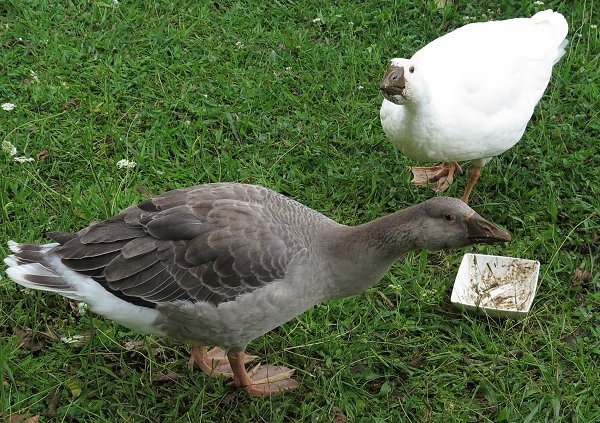 I didn't realise geese like dabbling in muddy places.  They've been making horrible messes around the edges of the concrete where water has pooled with the rain.  Dirty birds. 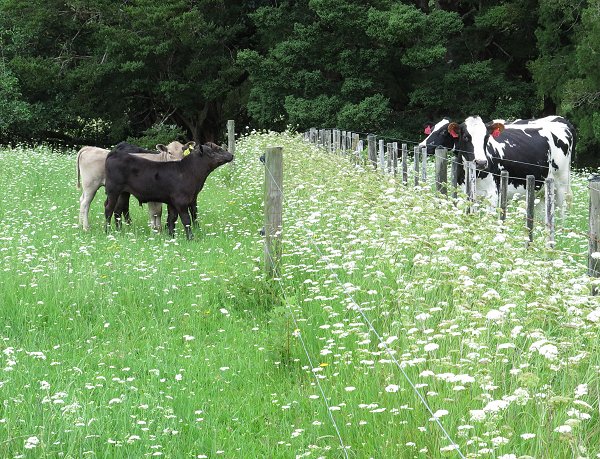 As far as I've been able to observe, my adult cattle seem quite incurious about other cattle on the boundaries, generally ignoring them altogether.  Only the calves are interested in these strangers. 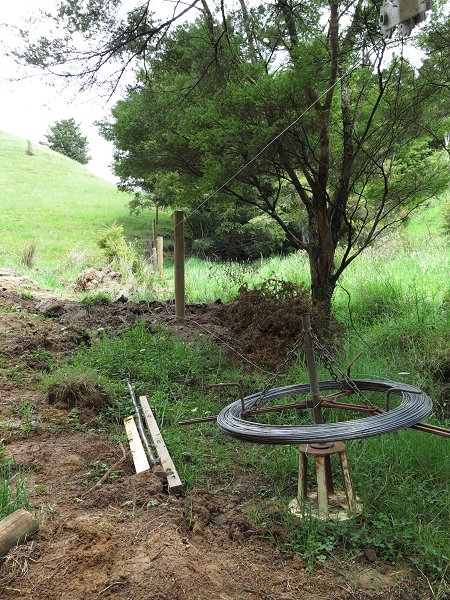 Having been held up by the rain for several days, Stephan got back over the road as soon as he could to carry on with the fence up the eastern side of the gully which divides the one-third part of Over the Road from the two-thirds part we can see from the flats.

He'd pulled the first wire up the hill himself the other day, but the spinning jenny which holds the wire kept catching on something, so he asked me to come and make sure it ran free as he pulled the other two wires up. 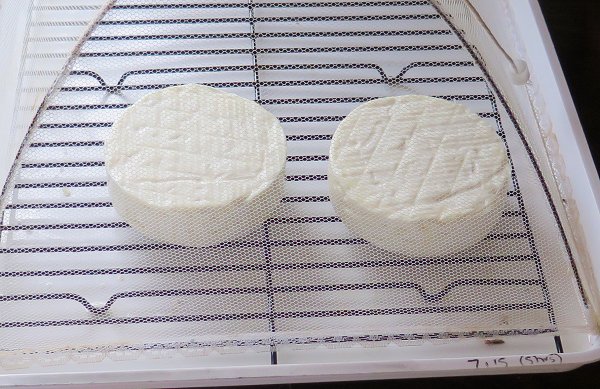 I made some cheese!  Stephan has been the cheese-maker to date, but when he wants to be out fencing, being stuck in the house having to do something to the milk every ten minutes or hour is frustrating.  I may have a new job.

These are Camembert-style cheeses and it'll be a few weeks before we discover if I did everything right.