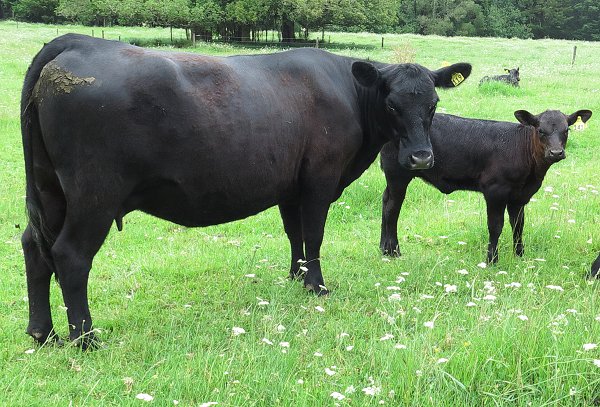 With all the heifer calving troubles this season, it's good to see the best of them still doing really well.  This is Ellie 119, the largest of the yearlings at mating time, maintaining herself in excellent condition as she rears her daughter. 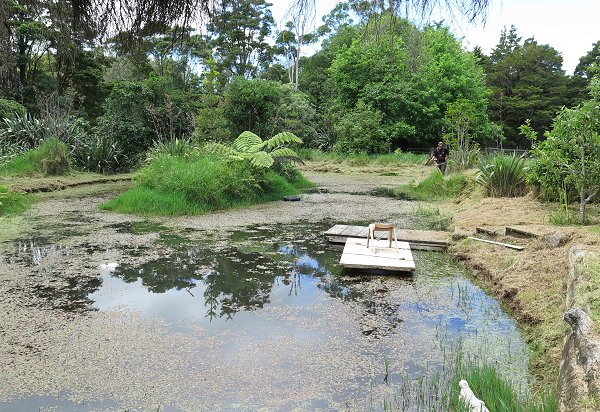 Stephan spent most of the day mowing around the pond, something he's not done for a year at least. 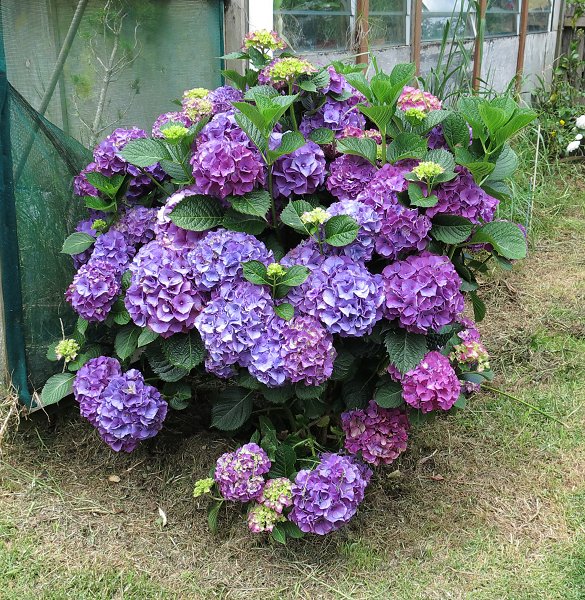 This is such a pretty plant, flowering really nicely this summer.  Stephan said he poured some whey around it earlier in the year (didn't mention it at the time in case it killed the plant) but I can't decide whether that might have made it pinker or bluer.  It is naturally purple, rather than the usual blue, white or pink. 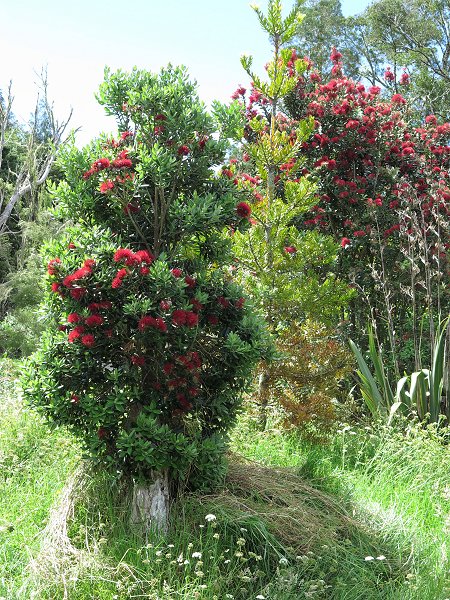 The Pohutukawa (in the background) is fading, but the small tree which grew out of the base of the Puriri trunk is now blooming beautifully.  I can't work out what it is, whether Rata, Pohutukawa or a hybrid.  The flowers' structure was a little different from the Pohutukawa when it was young, but is more similar now. 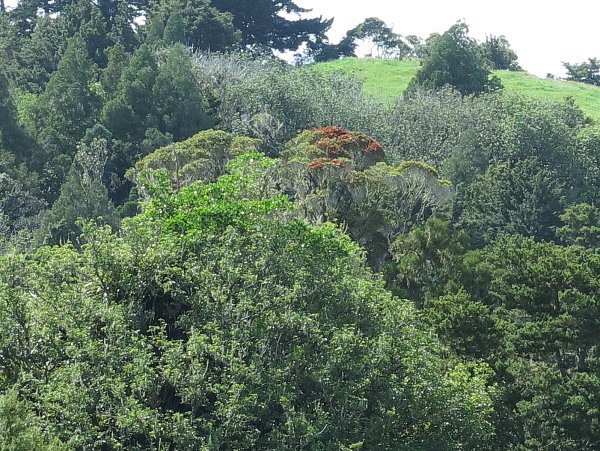 I've been watching the big Northern Rata as it appeared to be turning a little red.  It didn't get much redder than this.

While it has never bloomed as spectacularly as it did in 2007, I'm encouraged that it has flowered in most years since then, at least a little.  Possums do a lot of damage to Rata, so its continuing health is encouraging and possibly indicates that we're keeping significant pressure on the possum population here. 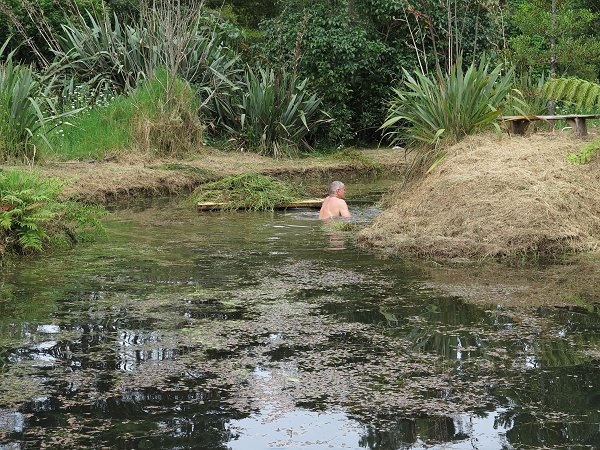 Now the edges and island are mown, it was time to weed from within the pond.  The raft became the weed barge again.

I spent some time pulling pondweed with last year's flax flower stems - a bit like eating spaghetti, winding the long tendrils around and around the "fork" and then gently pulling it all to the edge.  Not eating it though. 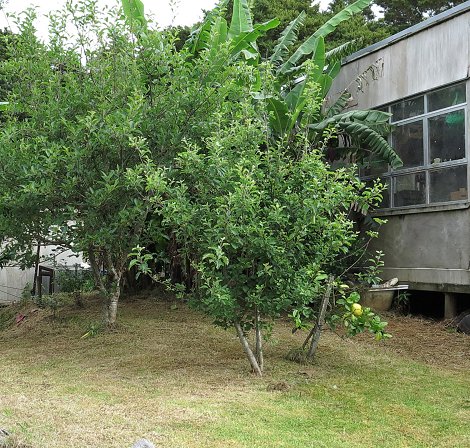 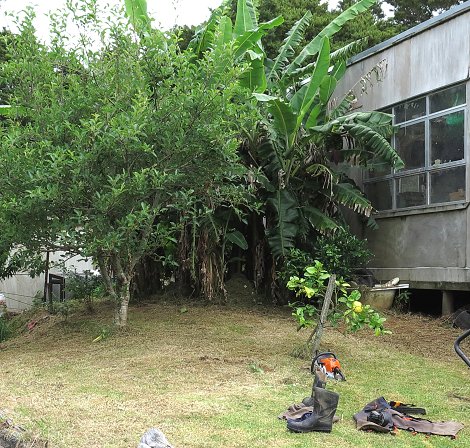 We've meant to remove the second of the seed-grown apple trees from beside the pond for some time, since it has never fruited and has always been a poor specimen.  Today it went, cut down by the invisible inhabitant of the boots and chaps on the ground.

Now there's more light for the Ponderosa Lemon, with the improbably large fruit and swimmers will have more space to run from the jetty back around to the slide. 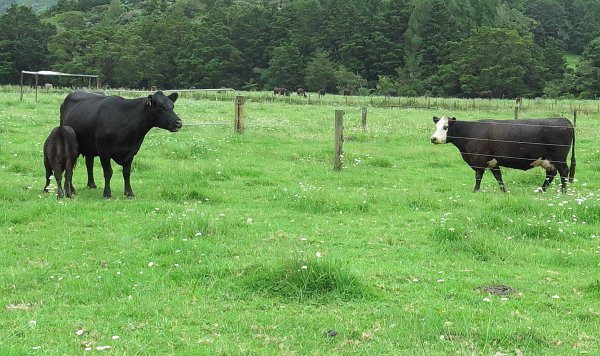 I moved the mob of cows and calves from Flat 3 to Flat 2, watching and wondering who it was who stood resolutely at the top of the paddock feeding her calf, instead of coming to the gate at the other end with the rest of the mob.  Eva.

White-faced 517 walked up the new paddock, then came toward Eva on the other side of the fence, growling, as if she hadn't just been part of the same group.  Silly cow. 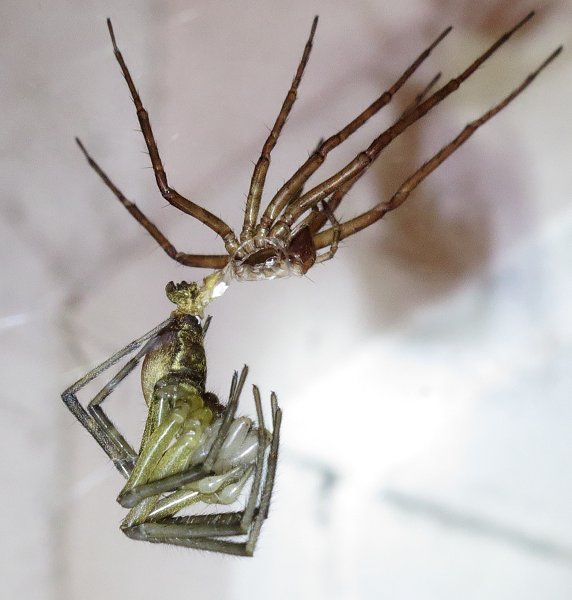 Goodness knows why sheetweb spiders like our bathroom, but here's another one, just completing a moult.  I can't decide whether it is male or female.  It looks a bit like it has palps, indicating that it's male, but the discarded skin does not have them, so perhaps some swollen bits upon emergence settle down again as the new skin matures or dries.  I think its legs are pretty much the same length as each other; in the male, the front legs are noticeably longer.  It only comes out at night, to wait on its web for prey, so I'll have to have a good look at it when it has returned to normal. 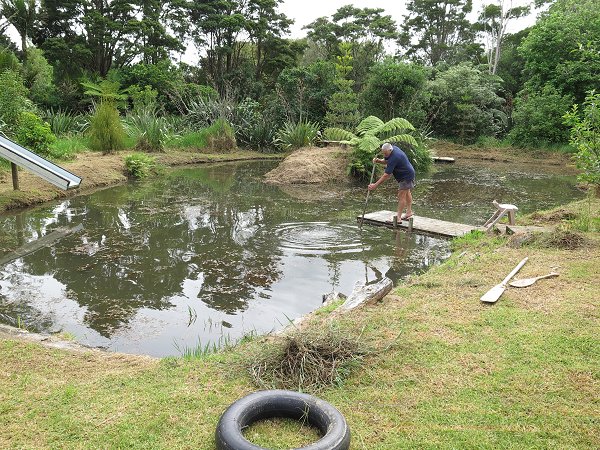 A bit more pool maintenance, in preparation for swimming tomorrow ...

Then we went out for lunch with Elizabeth's family, turkey with all the trimmings, hot and cold Christmas puddings, a lovely afternoon.

We spent all morning in preparation and then carried on into the afternoon, wondering when any of our visitors would show up!  I thought we'd suggested any time from one o'clock, but nobody came until after three.

One of the first guests offered me a glass of her very nice wine, then I had half of something else and was three sheets to the wind for a couple of hours.  I presume it was tiredness and the warm afternoon which caused me to be such a cheap drunk.  That's my story anyway. 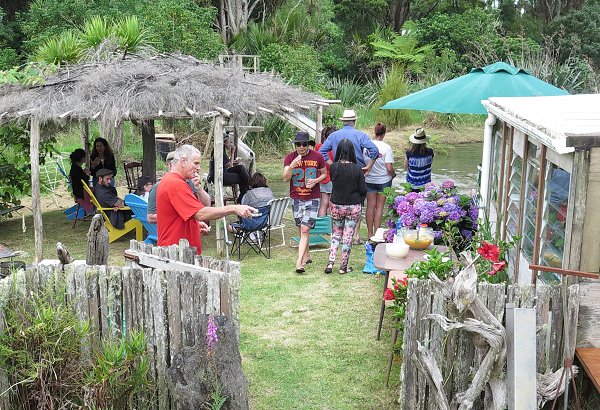 Niece Amanda brought a party of friends we'd never met before, all of whom were lovely and then lots of the rest of the clan arrived with food and children. 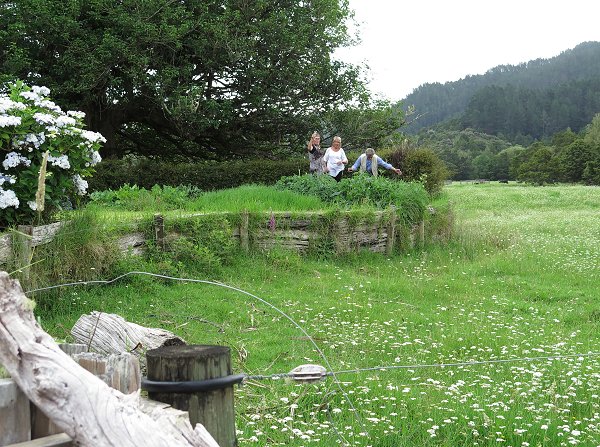 We banished the smokers to a spot well down-wind. 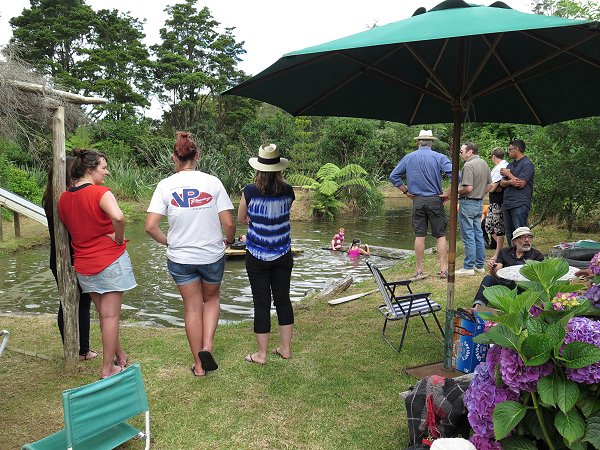 There seemed to be a French theme with Amanda's French friends and cousin Christina's daughter visiting from her usual home in France. 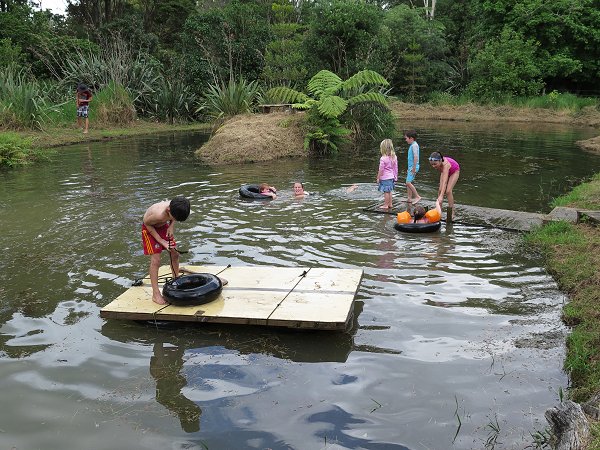 Look, hardly any weed left in the pond!

Most of this year's swimmers were small people, since few of the larger swimmers were present.  The water remained a lot less muddy than it does when there's a lot of leaping in of big bodies with huge splashes. 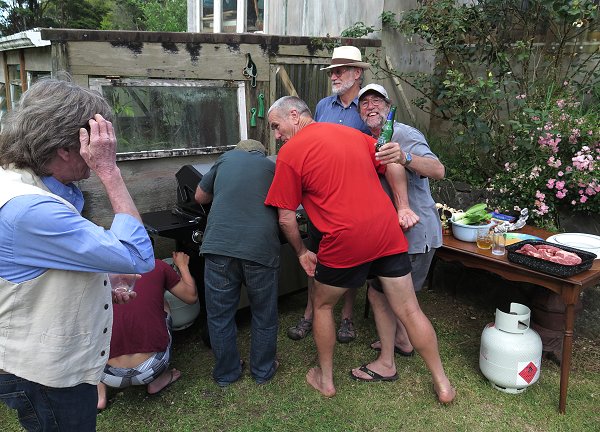 We'd borrowed William's barbecue to cook all the food, but it didn't work properly.  Something must have shaken loose during the journey here on the back of the ute (probably mason bees in the works), so a lot of men gathered around and pretended to know what to do.

Char-Lien's brother had brought some grain-fed Angus steaks from the Five Star Feedlot down in Canterbury.  As you may already know, I'm not a fan of feedlot "farming", nor do I believe that grain-fed beef is particularly healthy meat for us to eat, but I looked forward to tasting it and hoped it would confirm all my negative prejudices.  It didn't; it was pretty good eating. 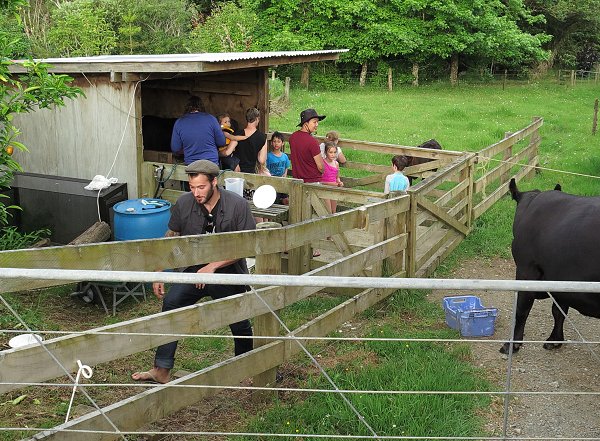 Not forgetting the cows, some of us rounded them up and brought them in for milking, which was watched by a gathering of children and interested adults.  Zella's so calm and seems almost unperturbed by large numbers of people gathering around behind her.