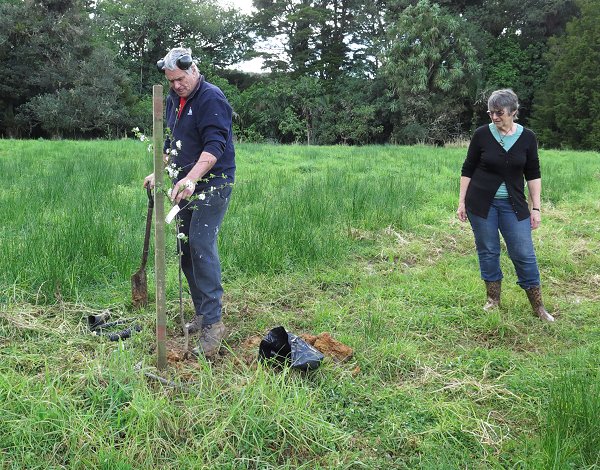 Elizabeth and William brought a new plum tree out today, to replace the single non-surviving tree from the original planting two years ago.  It's a "Duff's Early Jewel".

None of the other trees have yet begun to bloom or show leaves. 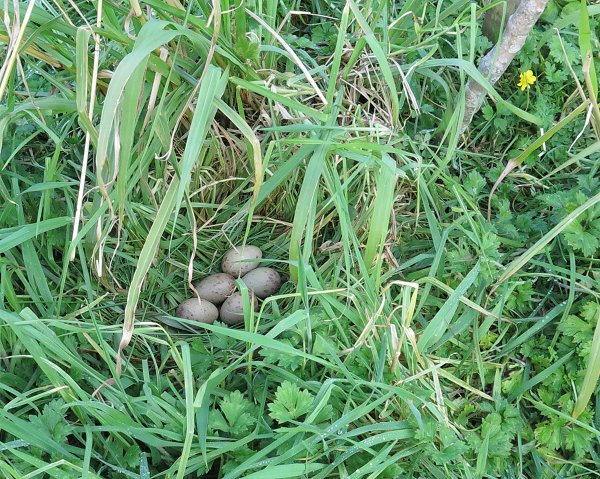 The Pukeko know it's springtime though. 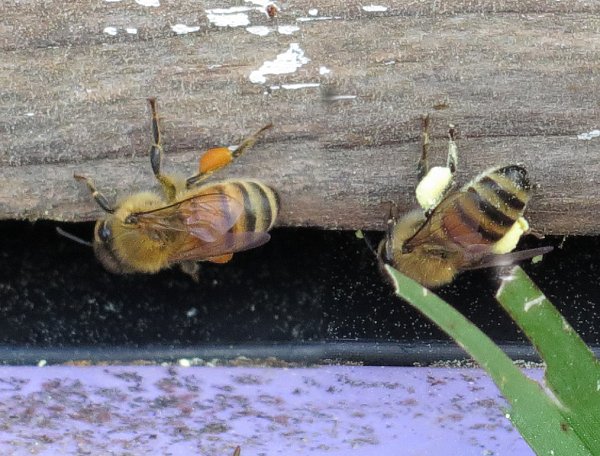 A slightly manipulated photo - I pasted one of the bees into the photo of the other one, since they didn't appear together, although they were entering the same hive box a few seconds apart.

Some of the bees entering the hives in the Orchard paddock had very light-coloured pollen in their leg pouches and others carried a much darker, honey-coloured pollen.  Presumably they were collecting from two quite different sources. 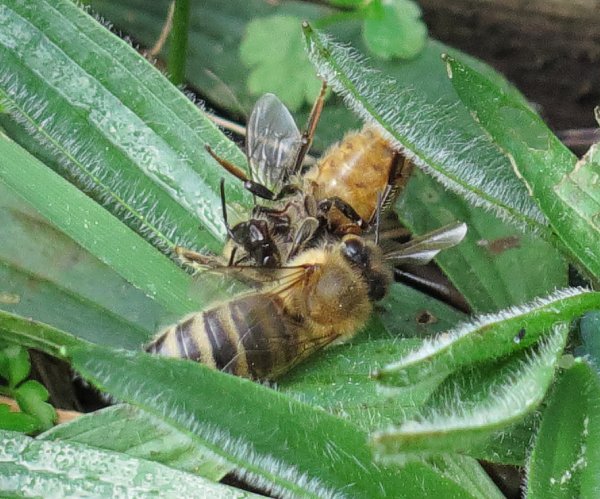 At the front of one of the other boxes, these two bees were having a rather noisy fight.  I wonder what bees fight over? Was one in the wrong box?

Stephan went off to a Trappers' educational workshop.  They're publicly accessible gatherings which are great sources of information for people on the land, generally, as well as an opportunity for the professional trappers to catch up with new discoveries by others on how to catch pesky pests. 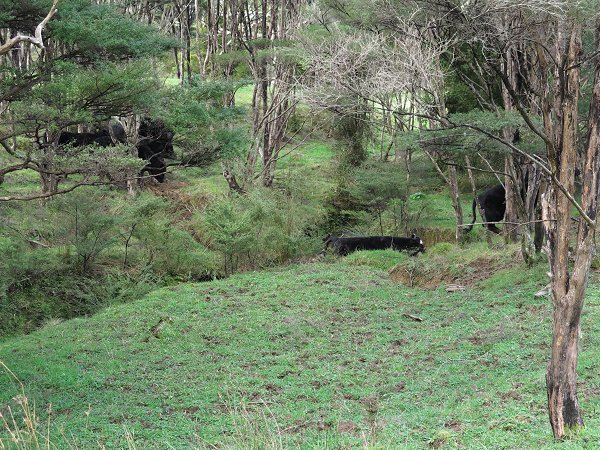 This piece of stream will be fun to watch, once we've fenced it off.  Just upstream is a very well-recovered section, which probably indicates how much seed comes down the stream when it floods and/or how much seed is dropped by the birds which frequent the Kanuka trees which line the banks. 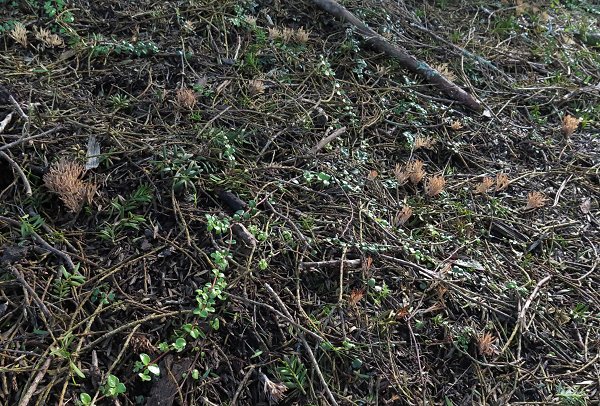 Little coral fungi on a hillside in the PW. 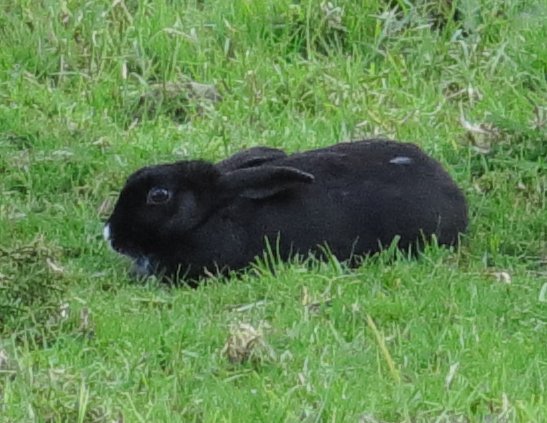 Black rabbit is still around, although in the days following this photo I noticed its territory had either expanded markedly, or it has shifted home.  I keep seeing it in the lane between Flat 1 and the Windmill paddock, running into the Camp paddock.  Or there's another black rabbit ...

There was steady, heavy rain yesterday afternoon and again this morning; another 87mm we really didn't need. 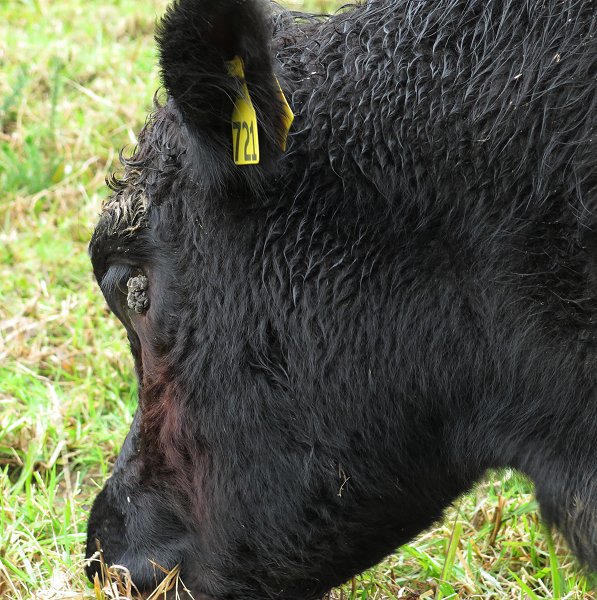 721's eyelid wart continues to grow.  There's a photo of it in April, when I first noticed it.

It doesn't appear to be causing her any bother.  Cattle quite often get warts around their faces and heads when they're young, but they generally resolve on their own, without any treatment.  I've sometimes sprayed Iodine on warts, but would never do that to a wart so near the eye. 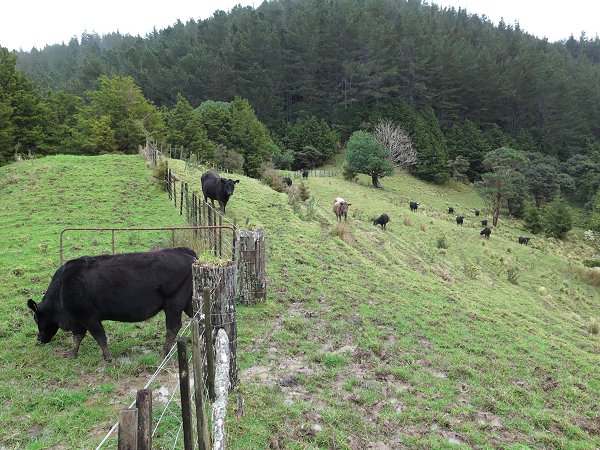 I climbed the hill and opened the gate from the Middle Back to the Big Back North paddock and called the heifers; they mostly ignored me.  Sometimes they seem entirely happy standing right where they are, even though the grass is all gone and it's time to move. 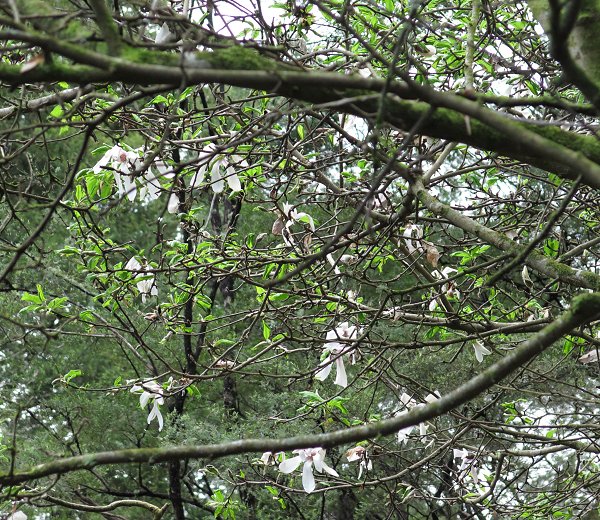 Walking back around the road from checking the cows, I saw this flowering tree in a neighbour's gateway.  They look like crashed fairies.  I don't know what sort of tree it is.

There was a tiny bird's nest on the side of the road.

We went to an election candidates meeting this evening in town.  Unfortunately they weren't all there, but it gave us a chance to meet the latest Labour Party candidate, who's a very articulate young woman.  The National Party's man (always a man) has always won in this electorate, rural areas tending to conservatism.  MMP (Mixed Member Proportional) has been a great institution for areas like this where, otherwise, a vote against the status quo never counted.

I found the discussion somewhat frustrating.  The answer to every problem was economic growth.  There is no acknowledgement of the societal and community breakdown which has resulted from individualist, user-pays, everyone for themselves policies over the last thirty years.  So the answer to child abuse, poverty, crime, etc. is jobs for everyone and "trickle-down" (I presume) for anyone who can't or won't work.

I was extremely distressed by the same answer to a specific question about sexual and family violence.  Jobs don't stop men (in the main) abusing women and children.  Most male abusers of children and women have jobs; they also have a really appalling attitude to women and children and anyone smaller or less powerful or vocal than themselves.  All of the most publicised sexual-abuse cases in this community in recent times have been perpetrated by men in employment - teachers, priests, "community leaders", in particular.

Change will only come about through leadership, good examples set by fathers, brothers, partners showing respect for the women and girls in their lives and calling other men on their disrespect and disregard for women.  How many men write emails to protest against the regular and continued publication of sexist jokes in our farming newspapers?  To how many men does it occur that this ongoing sexism blights the lives of all women and consequently of all people, as women are restricted, prevented from expanding to our full creative and personal potential?