The week beginning the 6th of December 2014.
Saturday the 6th 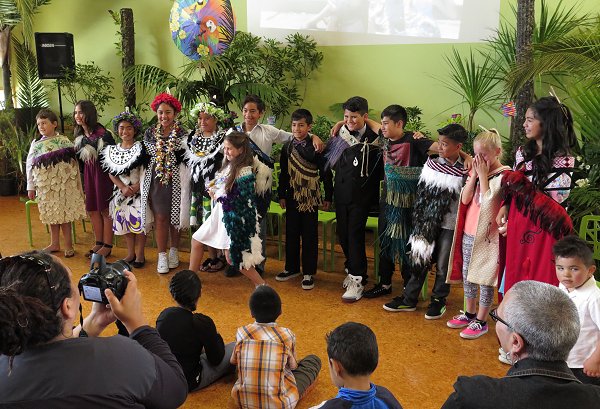 Today's graduation ceremony was a fairly long-lasting affair because this time there were 13 children involved.  Every child was called up and their whanau (family and supporters) joined them and one to three people from each of those groups spoke about or to their child after each had been presented with their korowai and done their mihi (speech).  It was all very lovely.  The one aspect which bemused me was the number of youngish people who said to or about their younger relatives, we're so proud you've come this far.  Really?  Short of being incarcerated in a school for criminal children or run over in their own driveway, who doesn't make it to the end of Primary School?  You don't actually have a choice about being there.

Afterwards there was lunch, a big buffet catered by many people from the school community. 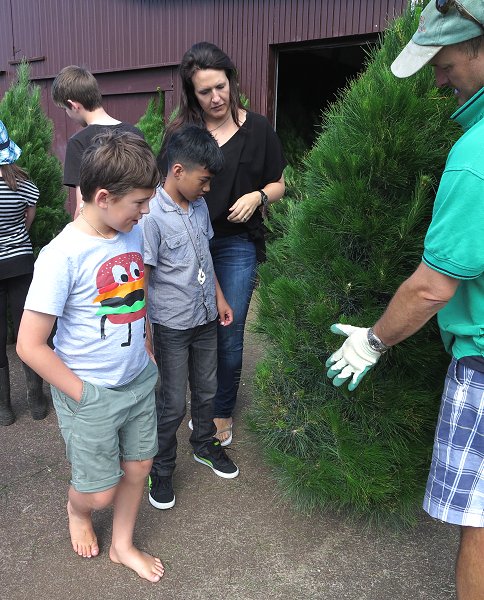 Stella and Louie went with Roger out to Piha, where they have a bach and Jasper, his best friend Duane and Jude and I went to buy a Christmas Tree.  Jude has a very busy week in preparation for her annual music concert and wanted to get this bit of Christmas preparation done early.

This sort of experience of city life always amuses me.  When we were children, possibly a bit before Jude was born, Father used to take us up the back roads behind Mangonui cemetery where there were many small Pine trees growing - I don't remember if they were planted or wild there - and we'd pick one out and take it home.  In recent years we've used Manuka or Kanuka from the farm and several times the somewhat straggly potted pine I grew a few years ago.

Apparently these beautifully bushy and nicely-shaped trees are radiata, so perhaps I could similarly train my tree, if I carefully pruned it. 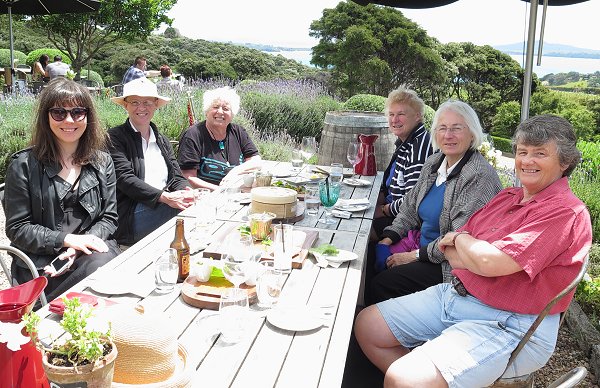 Jude and the boys dropped me down at the Ferry terminal in town and I caught the noon boat to Waiheke Island to have a wonderful feminist end-of-year lunch with some of the organising committee of the Women's Studies Association.  Hilary (at right) had phoned me last week and mentioned they'd be meeting for lunch and so I said I would be in Auckland and could come!  It was lovely to catch up with them all. 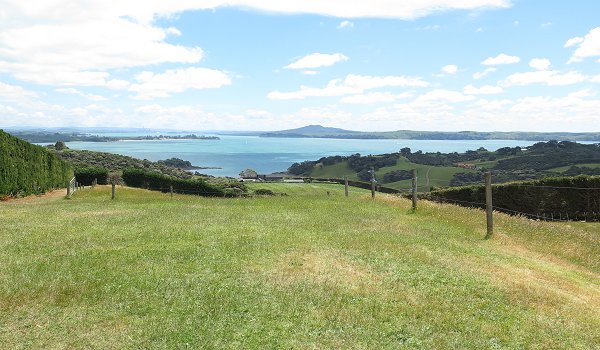 It was a fine but cloudy and quite breezy day, but the view from the hill behind the lunch venue was great, here looking out toward Rangitoto.

Jude came and picked me up again from the Ferry terminal and we went and picked up fish-and-chips on the way home.

Just before 8pm I began to feel unwell and then became violently ill.  I was trying to think what I'd eaten for lunch that could have been risky, but by the end of the night Jude had heard from five other families in which various members were similarly afflicted, as was Roger at Piha.  It was then that she told me "a bug" had been going around the school for the last week or two and it seems someone who should not have been, was part of the food preparation team for yesterday's graduation.  I continued being sick through the night, along with intense and disconcerting pain in my muscles and joints, finally falling asleep on the bathroom floor for a while in the early hours, since I couldn't stand any longer waiting for another wave of nausea to effect its unpleasant outcome.  Utterly miserable.

Up early and Jude took me along to the bus-stop in Symonds Street to catch the airport bus for my 8am flight.  Fortunately I was no longer vomiting.  My seat allocation was for one of the emergency exits, so I had to seek human assistance, telling them I was in no fit state to be responsible for anyone else's safety and would probably be best seated near the toilet down the back, just in case!

I squirmed all the way home, as my body continued hurting everywhere.  Once home, I lay on the couch and dozed for the day.  I was supposed to come home and check cattle, do the jobs we'd agreed I would while Stephan was out trapping.  They all had to wait.

Still utterly miserable, but I slowly walked around the heifers in the early evening.  I kept suffering the most awful pains down the back of my legs, meaning I couldn't stand still at all. 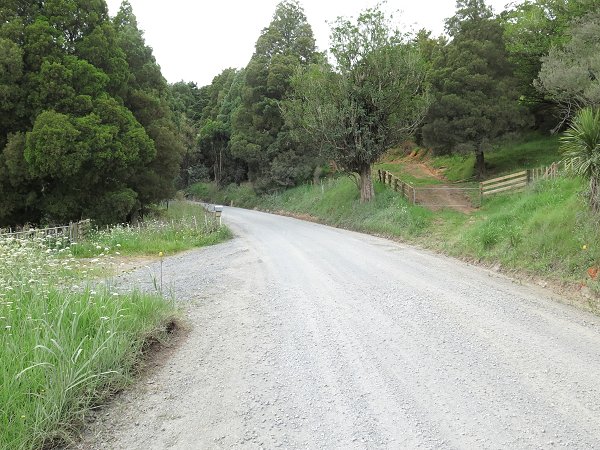 The road works have begun outside our place, taking out some of the water-line which feeds the trough Over the Road.  Stephan had forgotten it was running along the outside of the neighbour's fence and hadn't pulled it up before the digger got to it. 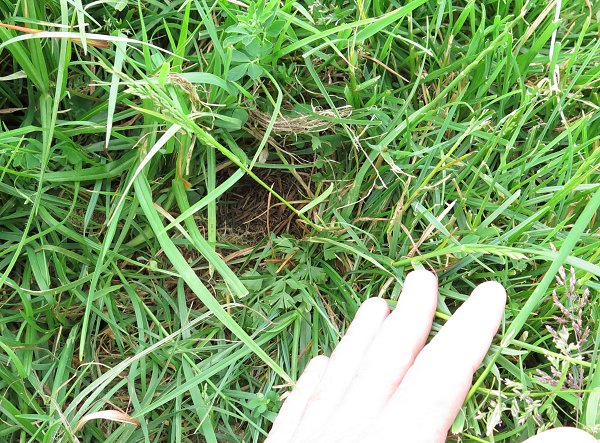 I was walking around with a little more energy today, so went to see the Skylark, only to find the nest empty.

A few days later I noticed a parent fly up from the ground nearby, so perhaps the chick was moving around in the grass somewhere. 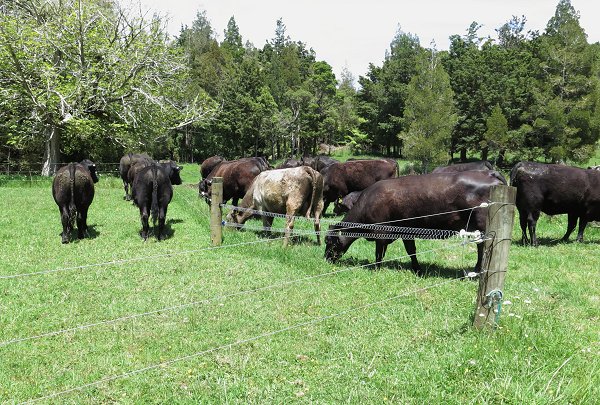 I walked the heifers and their calves out to the Big Back South, past the four bulls in the Bush Flat.  I was a bit nervous about the bulls having only a spring gate at the end of their paddock to separate them from the heifers in the lane, but they know about electric fences and therefore don't try anything silly.  I think Meg 699 may have been coming on heat, but I hurried her past the spring gate area, so they'd follow her along the fenceline instead. 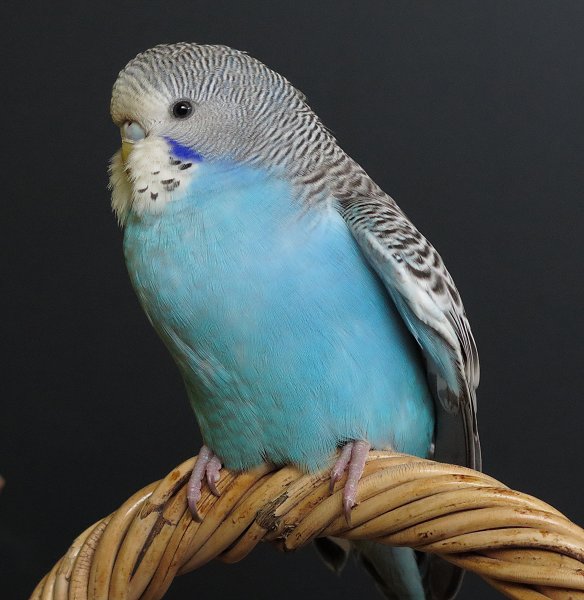 I couldn't possibly tell you how I got this budgie home from Auckland without incriminating myself.  He was found in the street by Matariki and taken to Jude's house, who decided she has quite enough pets already.  The girls carried out some random word-search naming exercise with a dictionary and named the bird Loofah Equilibrium.

He's had a chequered story since being found, having at some stage been retrieved, wet, from the dog's mouth.  He has a damaged left wing, but seems able to flap it about without problem, so whatever injury there was presumably no longer pains him.

Because he can't fly properly, I've let him roam free in the living room near the cage the others are in and he found he best liked sitting on top of the kindling basket near the fireplace.

I took myself to the doctor today, having been alarmed by the severity of my ongoing leg pains.  The doctor reassured me that as I'm otherwise healthy, this odd side-effect of the gastro-enteritis bug will pass in time. 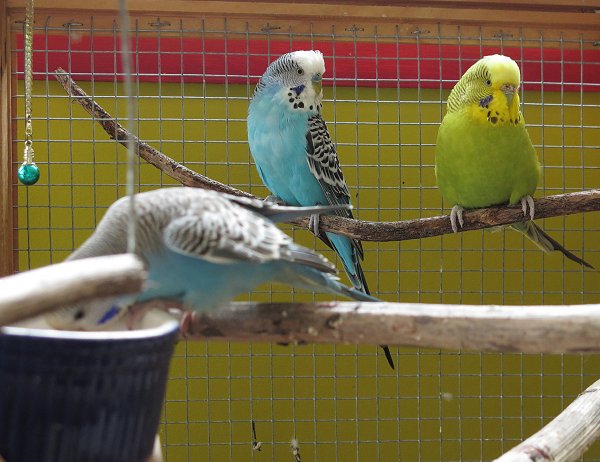 When we came home, Loofah was on top of the budgie cage and as the others appeared calm, I put him inside with them.

I wiped these dying sedge plants eight days ago.  It's encouraging to see such a good response to the herbicide.  I'll go back and get the rest when I feel better and the weather is fine. 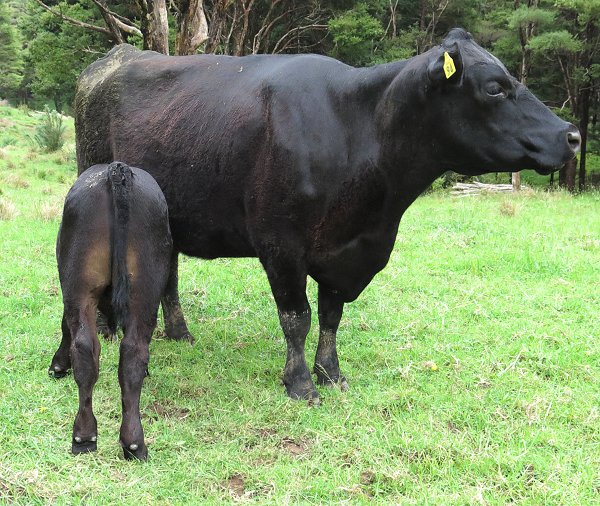 This year's sons of Pono of Kawatiri are looking a lot better than last year's.  Last year's two were cow-hocked and narrow-bodied.  This calf, son of Dinky 94, is a great deal thicker and straighter in the rear.

The semen straws were a gift from the bull's breeder and no doubt it was my cow choice which made the difference between the animals.  It would be nice to have a good Pono son to use in the herd. 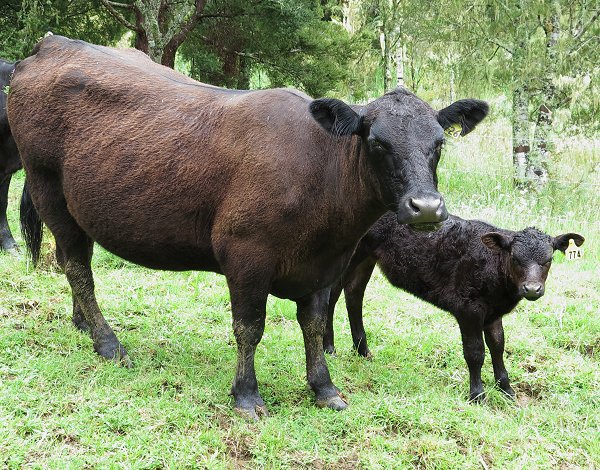 This is 726 whose calf panicked her way across the flats in her first few days of life.  The two of them have settled down as expected.

726's sister last year, 711 had so little milk that her calf did very poorly.  I have been pleased to see that 726 appears to have a much better udder and hopefully quite a bit more milk.

The calf is a puny-looking little thing, but it's hard to remember which calves are younger than the others when they're together and it may be that she's younger than those with which I compare her in the field.  We'll see what her numbers look like when we get the scales back.

The story of the scales is a frustrating one so far: the display began to switch itself off and on whenever I was using it, so getting the last of the weights when weighing the bulls last week was problematic.  The weight displayed appeared to be correct, but I had to wait while the display went through its internal processes each time it flicked off and on, before it would show me what the weight was.  That's tricky when an animal is moving anyway and wants to get out of the race.

So, after weighing all the calves and then the bulls, we took the display to town to have it sent away for diagnosis and repair, early enough, we thought, to get it back to weigh the calves again next time without any delay.  The staff-member of the retailer through which we usually deal informed us that it's never the display which is faulty and that we should have brought the load bars in to be sent too.  Stephan said we were fairly sure the display was the problem, evidenced by the continued correct measurement of weight and asked that it be sent.

A few days later, said staff-member rang me and impolitely and unnecessarily gloated that she was right and we were wrong, that the display had been checked and found to be working perfectly and that we would have to send the heavy load bars.

Stephan took them in after dropping me at the airport last Friday, but the display had been sent back.  On my return home I turned it on, it wouldn't turn off, obvious problem: someone was, at the very least, mistaken.  We took it back to town, had them retain the load bars in Auckland (or wherever they'd gone), where they'd been found to be working perfectly and sent the display back down.

As we approach the end of the year, with only one full working week remaining, I don't know if we'll get them back in time to weigh the calves by the end of the month. 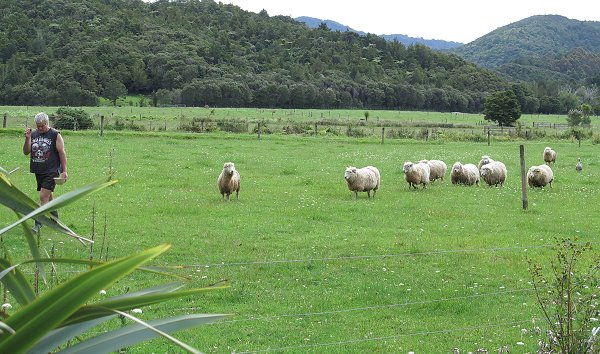 After a prolonged dry period, we've had some very welcome rain, just over 60mm to this morning, but that means the sheep are now at severe risk of fly-strike.

One is already twitching, so Stephan led them in this afternoon. 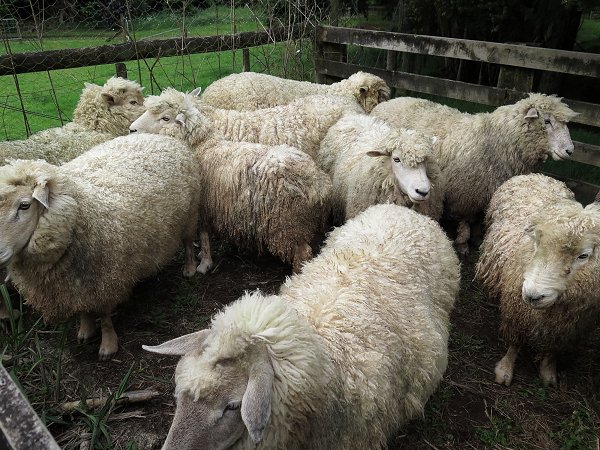 They've not been shorn since Kees did them for us when Stephan couldn't and they're definitely due again, but we'll now have to wait until their wool dries properly.

The animal currently struck is the one with her rear toward us in the photo.  She has been a poor specimen throughout her life, always first to be fly-struck, hanging around on her own looking slightly off, so today we made a decision we probably should have made some time ago and ended her life.  I doubt she would have made good eating at any time, since she is never in great health.

We did a post-mortem examination of her internal organs, finding nothing strikingly obvious wrong with her and buried her. 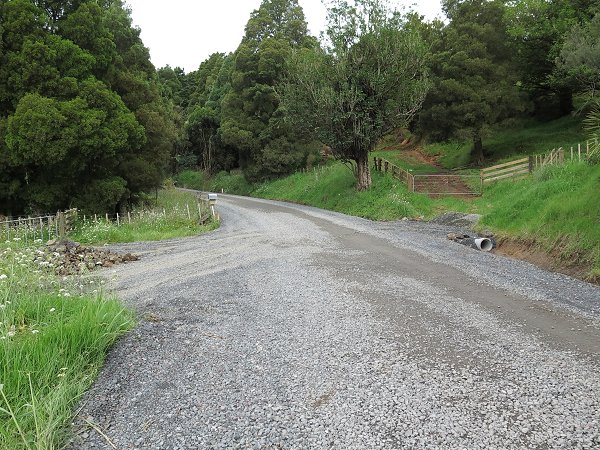 Road-works continued, with large machinery appearing in our round-about overnight and lunching men during the day.

We spoke with them about the need for a culvert to facilitate access to our gateway over the road, commenting that if they didn't put one in, the post-thumper would make damaging grooves in their new seal!  They put a significant culvert in and will come back to concrete rocks around its ends next week.

We separated Zella and Imagen from their calves for the first time overnight, because Zella didn't even yield enough milk this morning to feed the orphan, let alone provide for the house.  Her calf is now 24 days old.