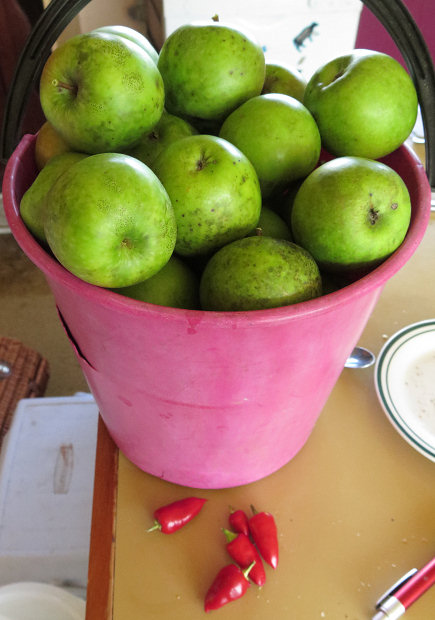 We've had a nice crop of apples from our little three-variety tree this year, these the Granny Smiths.  Stephan brought them in to make Blackberry jelly (with berries frozen when they were picked a few weeks ago) and apple and rhubarb and, later, apple and feijoa crumbles for desserts. 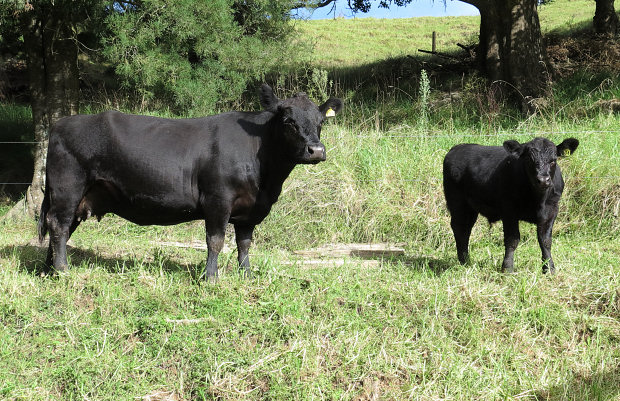 Here's 710 with her backwards calf, all nicely grown up.  He seems quite a quiet little animal.  I'm so glad we got him out alive. 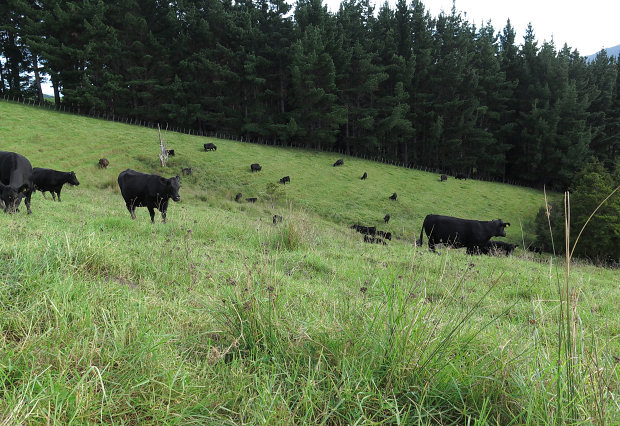 I took myself over the road for a gentle climb up the hill and around the cattle, feeling a bit unsteady with my weird new vision.  But to my extreme delight I found that, with binoculars, I can now see across the valley to read the numbers on the ear-tags of the far-away cattle!  I used to be able to do that but had forgotten.

I have a black line around the edge of my left eye's field of view which I will apparently eventually not notice (caused by the edge of the lens, different from a natural one), but at the moment it's making me feel wobbly and as though I have the end of a migraine aura going on all the time, which makes me a bit queasy too. 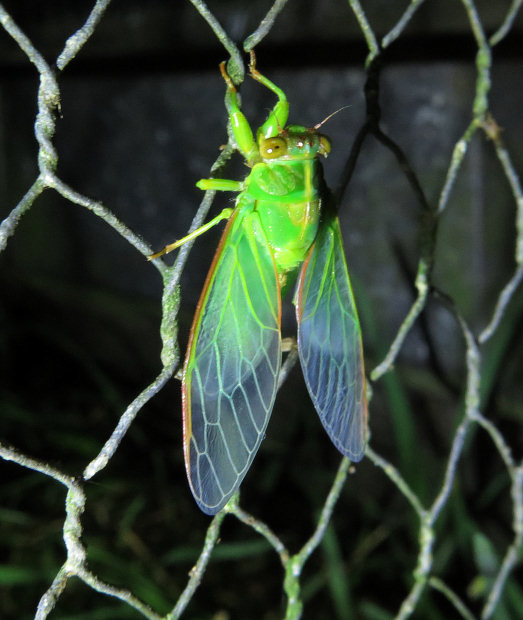 Stephan shut the chickens in after dark and came back to say he'd accidentally knocked a strange green just-hatched moth from the cage door.  It turned out to be this cicada, having climbed up to the top of the wooden door and emerged from its larval skin there.  I've only ever found the empty cicada skins, this is the closest I've come to seeing the actual emergence of the insect.  There are many things to be seen if one comes out and looks around at night.

(We'll blame the slightly out-of-focus picture on my inability to drive my eyes properly yet.) 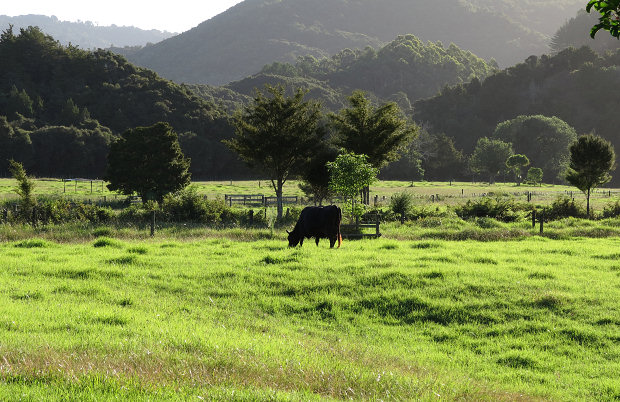 I can see, I can see!  The scales have fallen from mine eyes.

This afternoon, the sun shone through Zella's tail switch as she grazed around the House paddock and I could see it! 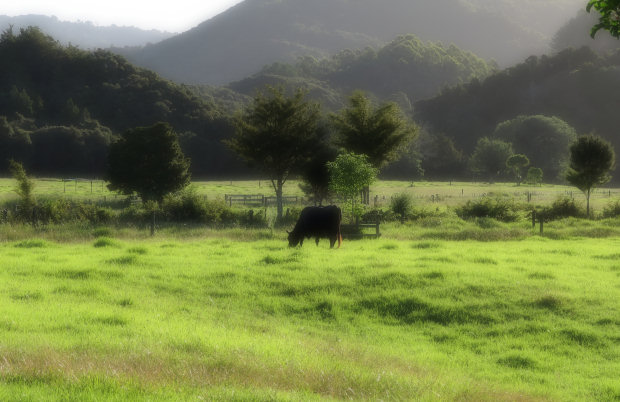 Here's an approximation of my former vision.  I could perhaps see as well as many people but knowing how things used to look, it was horrible and I could never have it corrected.  Through binoculars things seemed clear but now I know even that view was very much affected.  Distance and depth were difficult to distinguish because the further things were away, the worse the vertical doubling became, in both eyes, so the edges of trees blurred into the colours behind them.

Working on my computer in the first few days has been impossible for more than a few minutes and I had to turn the brightness and contrast way down and wear sunglasses!  Everything was painfully sharp.  I really had no idea my near vision had deteriorated so much.

I had very little clouding across my lenses, although that was starting; the problem was primarily the puckering which distorted my view. 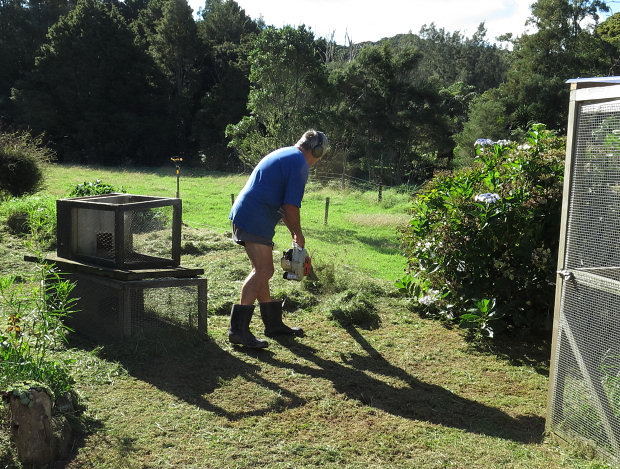 Along with Roger and Jude's vehicles, we have a collection of some of Roger's tools, many of which Stephan does not have.  This leaf blower isn't one we'll be looking to own ourselves, but there are a number of other things we're apparently going to have to buy when Roger takes his stuff back.  The best thing is a pruning chainsaw on a long pole, which Stephan's been using to more safely deal with some of the cutting he needs to do around big Totara trees, in particular. 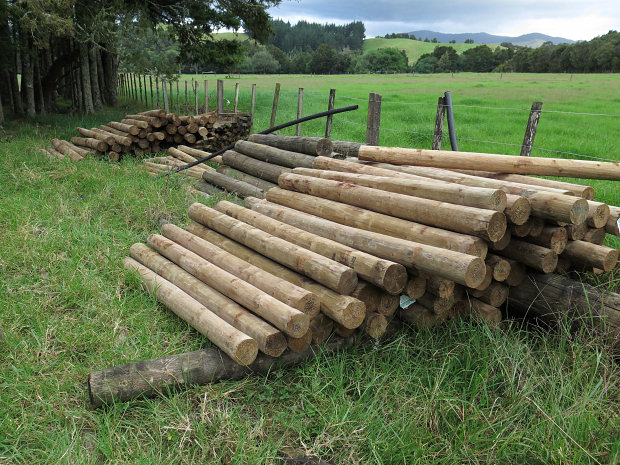 It being the end of some businesses' financial year, there are various "specials" on at present, including some on fence posts.  We still have a good selection of large posts but had very few smaller (thinner, not shorter) ones, which we want to use in places where the fencing doesn't need to be as robust as the other jobs we've been doing.  The two-wire electrics along inside the straight boundary fences where there are cattle on the other side, for instance, can have thinner posts than the actual boundaries or the long and angled fences around the streams. 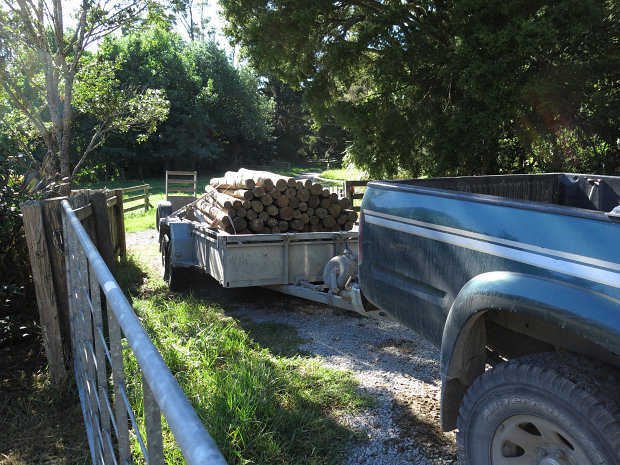 Roger's big trailer came in handy for collecting (more) bundles of posts which, otherwise, would have had to be cut apart and the posts transported home in smaller numbers. 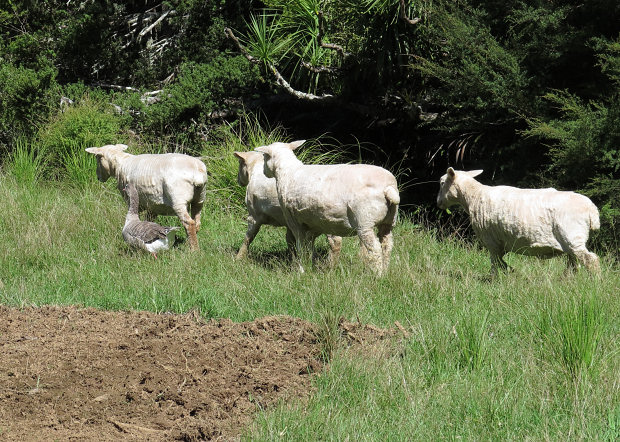 The shorn sheep and their Goose companion.  I feel much more confident of their safety now they're shorn.  Fly strike is such a horrible affliction and sometimes it's very hard to see that it is present when the wool is long. 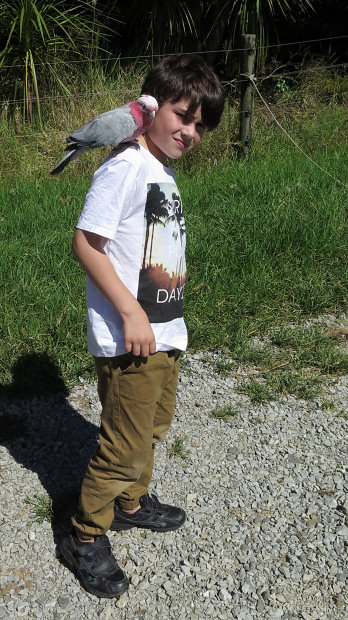 We had a lovely visit from Raewyn (whom we've not seen for about five years since they moved to the West Coast of the South Island) and Mathew and Sean.  Sean told us we're the only people other than his grandparents (Elizabeth and William) who he can remember, since he was only six when he was here last with Mathew.  (I'm not sure he's entirely correct, since that was only last January.) 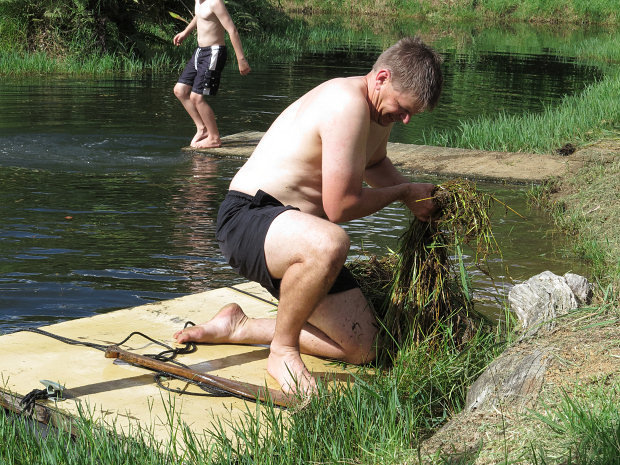 The weeding raft being put to good use again, Mathew pulling out huge chunks of the Kikuyu which grows from the bank and in to the water around this edge. 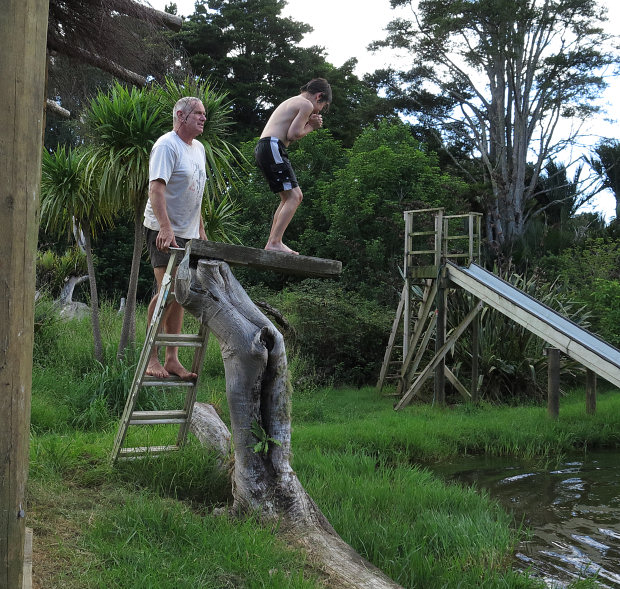 Sean wasn't entirely sure he wanted to jump, so Uncle Stephan went to help him make up his mind ...

While we were sitting by the pond, we'd looked across and noticed a huge Tobacco plant (Woolly Nightshade, Solanum mauritianum) growing amongst the Puriri and Flax on the other side.  When our visitors left, Stephan got the chainsaw and cut it down - said it was big enough to mill!

Click on the picture to see the before and after views. 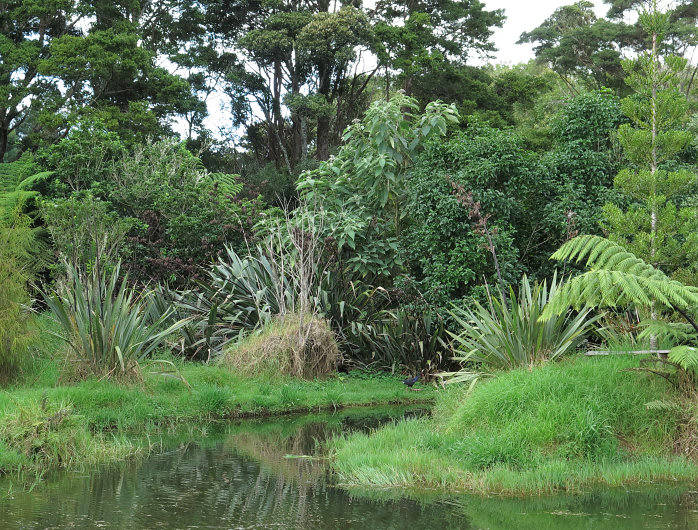 There's a dead Puriri there (with Kikuyu growing around it in a big clump) which could also be removed.  I've kept meaning to do a post-mortem examination to see why it died, my suspicion being that it had too many Puriri Moth caterpillars living in its small trunk, which probably ring-barked it.  I should still be able to tell if that was the cause. 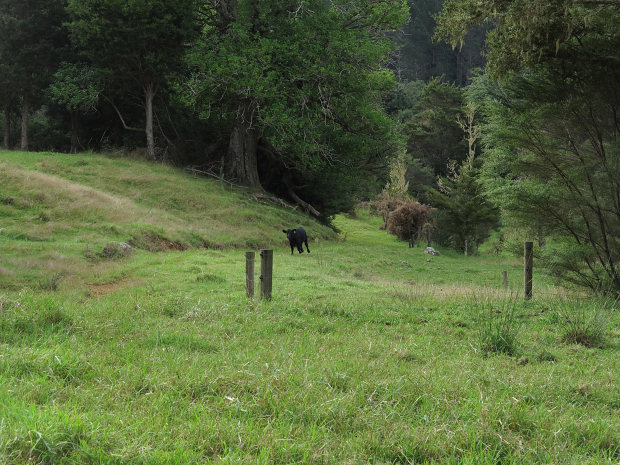 At 6pm I went out the back to call the cows and calves out of the Big Back South and moved them along onto the flats: I have a specific plan for the next few days' grazing because we're going to go away for the weekend.

It's a smallish paddock so I opened the gate and counted the cows and calves as they went out and started grazing the lane.  At 69 there was obviously someone missing, so I kept calling until I heard an answering moo.  As she ran past me I saw her tag, 152, Demelza's daughter, of course. 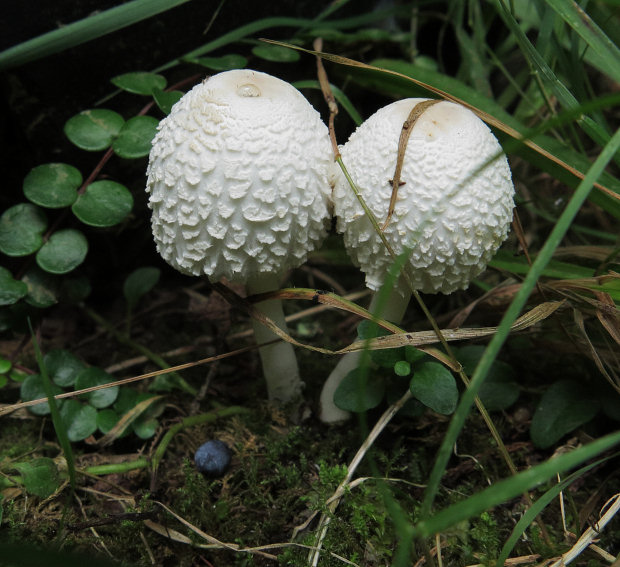 These cute toadstools were growing in the shade of the water trough.

Meanwhile Stephan went off up to the Airport to collect our much anticipated guest, Bernie.

Bernie won the 2014 Calving Date Competition and opted for the "weekend for two" on the farm, although had to defer it for a while, until he was due for a trip back home from Melbourne.  At the end of last month he wrote to ask if he could come this weekend, just as we were pondering how to get away to Simon and Anna's wedding.  Knowing Bernie had grown up in rural Taranaki, I asked him if he could milk a cow and when he answered that indeed, he had milked three every morning before school as a teenager, I offered him the "deal of a lifetime": instead of coming for a fully-catered prize weekend, he could come and do all the work while we went away!

I made this extraordinary suggestion because if I were living in the city, a chance to go away and play at being a farmer for a few days would be a fantastic opportunity and, thankfully, that's how Bernie saw it too, enthusiastically accepting the offer. 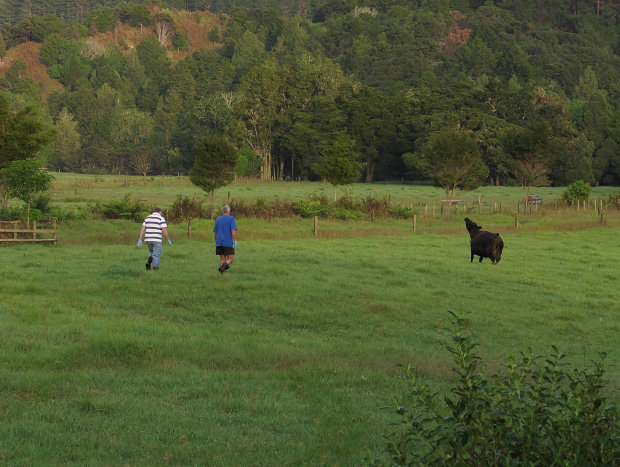 We spent most of the day showing Bernie around.

The first thing was to get the cows in and milk them.  Zella was behaving oddly and galloped off to the top end of the House Paddock, throwing her head about and kicking up her heels.  I think there was something unsettling the big mob over in Flat 5, rather than that she found Bernie's presence alarming.

Stephan and Bernie milked the cows, fed pigs and chickens, checked sheep and all those usual morning tasks. 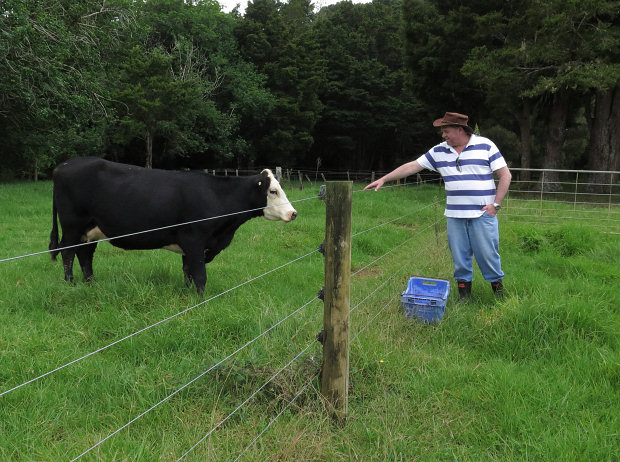 Then I took Bernie out to meet the cattle and get a sense of the lay of the land, which feels a bit different once you're here, compared with seeing it on screen.

We also drove out the back, with Stephan, to see the heifers in the Spring Paddock. 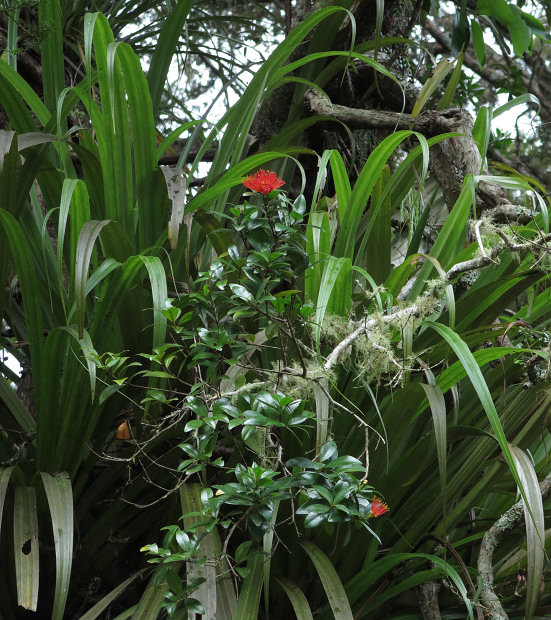 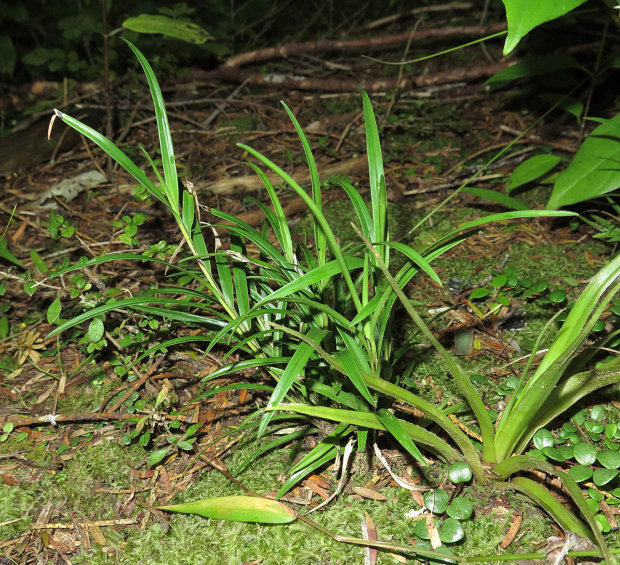 And out in the reserve area between the Spring, the Back Barn and the northern boundary, I found this normally epiphytic orchid, Earina autumnalis, growing on the ground.  I'll have to go back, find it and mark it so I can keep an eye on it over time.

Bernie took over this morning and did everything as we continued to get ready to leave for the weekend.

We hit the Auckland motorway a little later than we'd meant to, but still before we'd have thought it would be busy for the rush hour and it took us two hours to get through and out the other side.  It is quite a distance but it doesn't help when one has to travel at 5km/hour for long distances.

We arrived at Hot Water Beach (on the Eastern side of the Coromandel Peninsula) at about 6.30pm and phoned William (everyone is so blasé about arrangements these days, now that we can just phone each other wherever we are) to find out where we were staying.  There were only a couple of roads and we were driving toward him as we spoke.

Once we'd dumped our stuff in the "love shack" - a tiny hut with a bed and a hand-basin - we went and joined everyone else at the house William and Elizabeth were staying in.

It was lovely catching up with almost all the family, gathered together in one place.

Overnight the "love shack" became the "blood shack" instead, as we smashed multitudes of mosquitoes in an attempt to eliminate them and allow us to get some sleep!  Dreadful things.

Bernie made a suggestion upon our return home and I shall institute it here: a facility for easy contact or comment upon anything in the page, since people do not necessarily have resident email programmes these days for the "email us" links to work.

If at any time in the last few months you have used any similar form on the site to submit a message and not received a reply, we apologise: the facility had ceased working, without my knowledge.  Please try again.