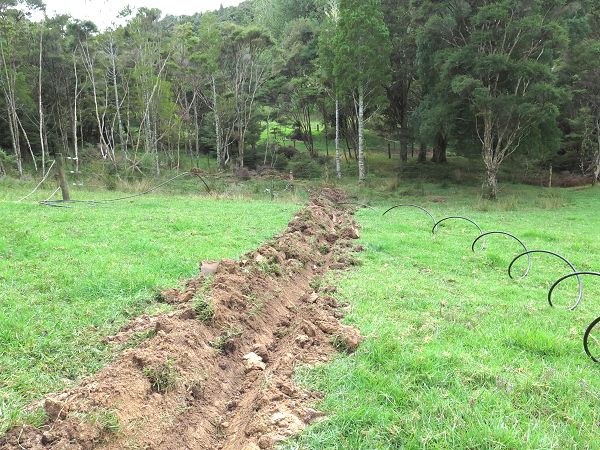 Crossing the stream is no big deal, just requiring a bit of threading over tree branches or tying to the top of fence posts.  The stream never floods very high through here and now it's all fenced, the cattle won't disturb the pipes where they're slung across. 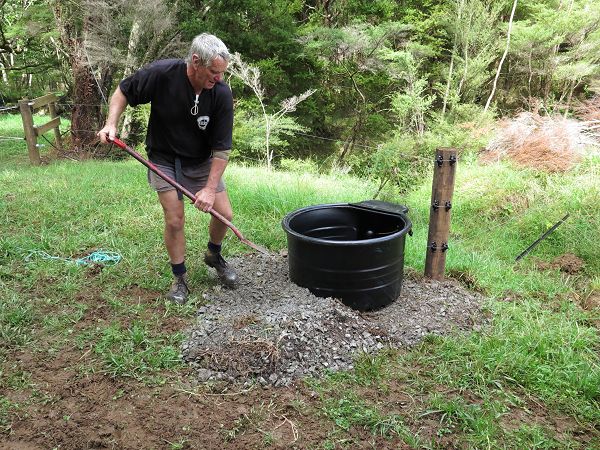 The new troughs are a different shape again from the last ones we bought, slightly more upright, but still 300 litres in size.  Stephan drove down the paddock with a bucket-load of lime rock to go under and around the trough where we decided it would sit.

There's a bit more work needed in this paddock because of the shallow drain running along its length.  We want to put two culverts in, one just here at the right of the picture for the cattle to cross easily and one at the top end, for them and for machinery.

We've been trying to think what to call this small area, now that it is divided from the part which will continue to be called The Swamp.  Thinking about things which have happened here, I particularly remember it being a favourite blackberrying spot for some of the family, when the slope on the track-side of the drain was covered in fruiting bushes.  My memory is of course aided by having noted particular occasions in these pages, in 2003 (second picture) and with my Aunt Joy in 2004.

As we already have paddocks named the Windmill (where there hasn't been one for years), the Back Barn (where there are only a few remaining foundations still evident), the Mushroom (where none have grown for decades), the Camp (where we did, but a long time ago), the Frog (where there are some, but only occasionally), the Pig (where the pigsty foundations remain), the Chickens (where they moved from ages ago), there is absolutely no reason at all why we shouldn't name this paddock the Blackberry!

We invited ourselves to William's retirement dinner at Kaitaia College this evening.  William being Principal has been a big part of all our lives for the last fifteen years and it seemed odd not to have been included, so we made some strategic phone calls and rectified the matter.  On our way in we stopped at Pamapuria School to vote in the by-election, holding our noses, voting strategically ...

The dinner was interesting.  Great food, lovely to see a whole lot of people I haven't seen for ages.  I'm glad we went.

We didn't hear anything about the election result until the do wrapped up at around eleven: the strategic anti-government vote overwhelmed the usual "vote National" nature of this assumed "safe" seat.  It has been a really interesting election and fun to be in the middle of it all. 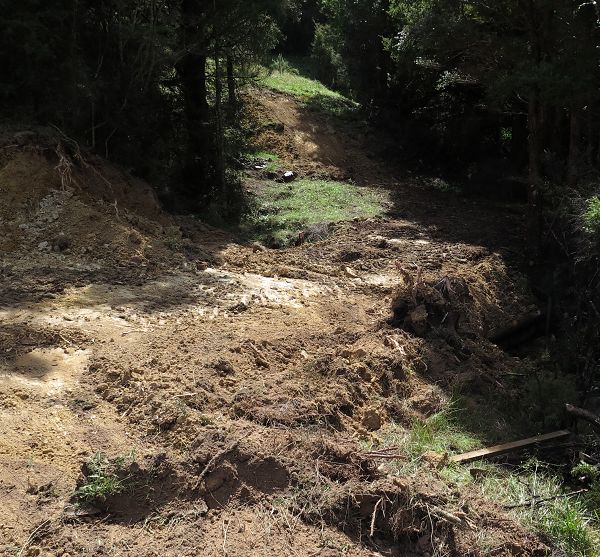 Now there's a culvert in the Small Hill gully.  It'll look messy for a while, but grass will grow over the exposed soil and things will settle down and be tidy again. 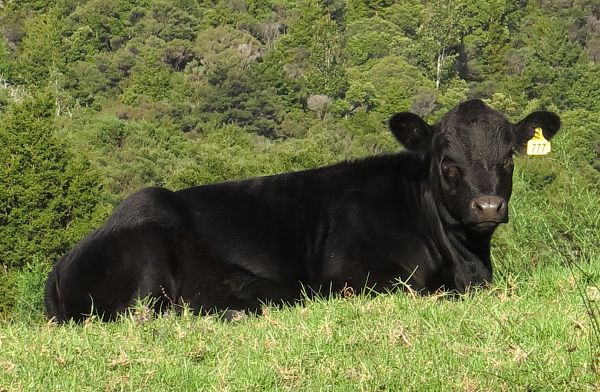 Favourite, long-awaited daughter of grey 607 appears to be fulfilling all expectations so far.  She's a beautiful animal. 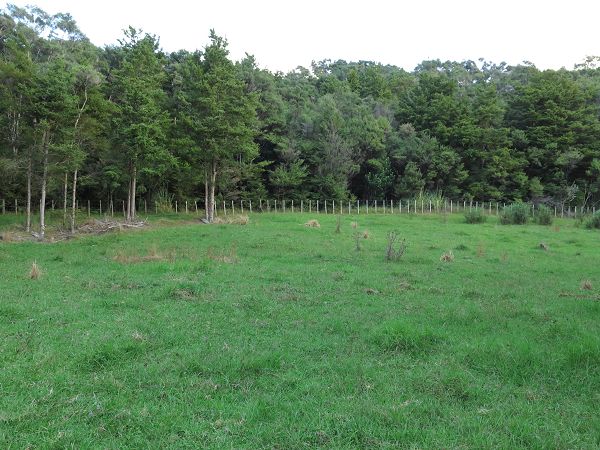 The sedge I wiped in the Bush Flat across the stream is dying.  Dead sedge is such a satisfying sight.  This little area is gradually improving with each application of fertilizer or lime.  It's a funny little pocket, but is warm and sheltered, so well worth improving.

Last evening when we were out, Jonny (the bee keeper) came round and went for a walk with his son looking for pigs.  He shot one boar at the crossing between the Mushroom and Bush Flat, so this afternoon I went for a walk all around the back of the farm with the .22 rifle ... and didn't see a single pig.

At dusk I went out again, this time to wait at the end of the Bush Flat, where the pig tracks come down out of the Big Back Paddock.  I was just preparing to leave when I noticed some black shapes on the other side of the swamp.  I snuck over to the fence where I could rest the rifle to get a steady shot in the falling light and knocked down a sizeable pig, then a small one as well.  As I went around through the gateway to check I'd hit and killed them, the first one got up and ran off!  I don't like not killing them outright and that one will very probably die, but I couldn't get a shot at it again as it left.  The other small (and surprisingly heavy) sow was dead. 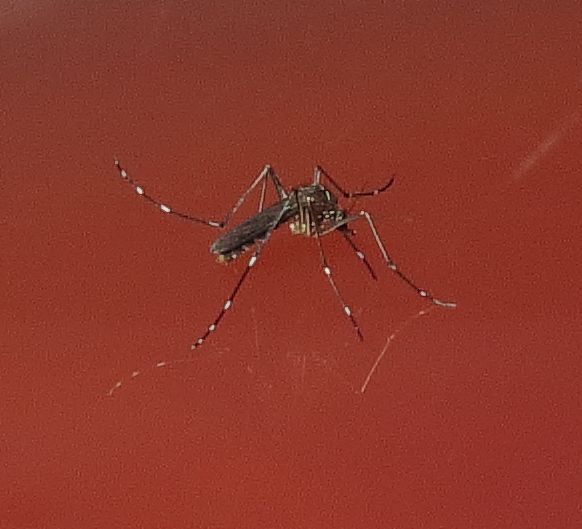 Stephan boiled up some quinces last night and this is the strained juice under the bag of pulp hanging from the ceiling hook.  On it stood a mosquito, apparently drinking.  You might see a bit of its reflection on the liquid under its body. 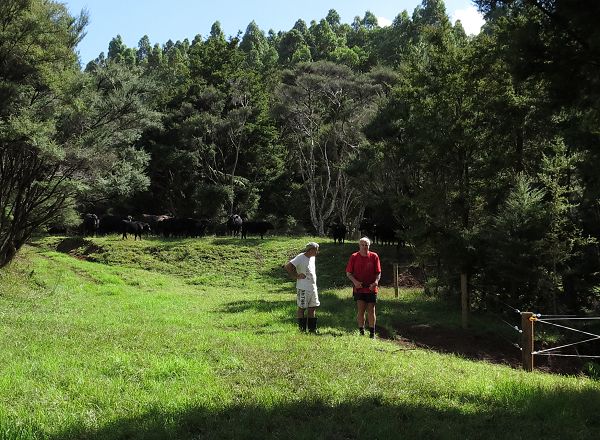 I had a phone call in the weekend from a man who'd been given my name as someone who might have bulls for sale.  We talked for some time as he is fairly new to farming and I invited him to come round for a walk amongst the cattle and to see how we do it here.

I may not have a suitable bull for his purposes, but will happily talk about cows and particularly enjoy discussing the ins and outs of farming with those new to the business, questioning the assumptions they might be making, talking through alternatives to information they've already collected. 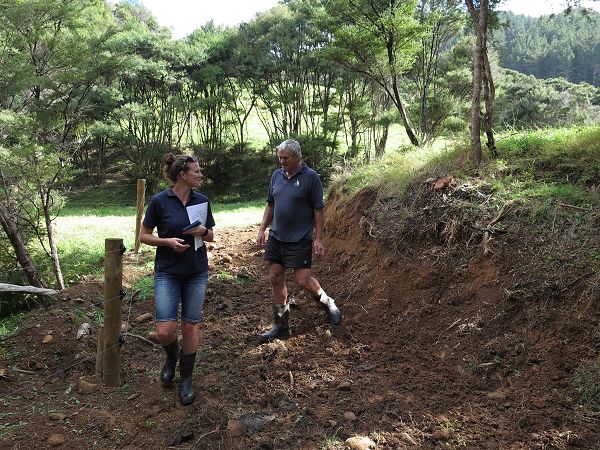 Our second visitor today was Anita from the Northland Regional Council, who came to see the riparian fencing project so she can sign the job off and approve payment of the funding.  We haven't quite finished the whole lot, but have already exceeded the length of fencing they approved last year.

Anita seemed very impressed and it was fun going around and discussing the reasons for the decisions we'd made in different areas. 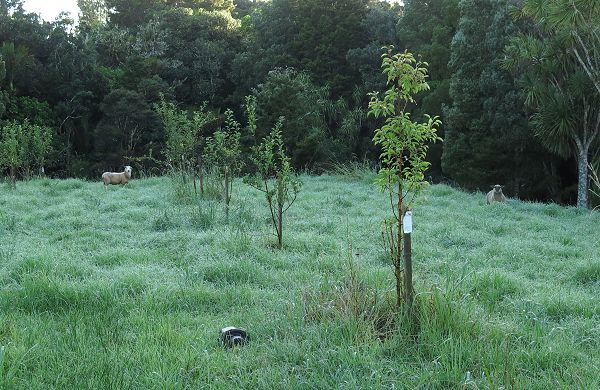 The neighbour's sheep are back in our orchard again.  Fortunately the trees are big enough that they'll probably not be bothered and there's more grass here than these sheep have seen in living memory, so they'll probably keep their heads down.  I'm tired of these recurring stock-wandering problems.  In my book if you cause a problem for someone else, you fix it so it doesn't happen again! 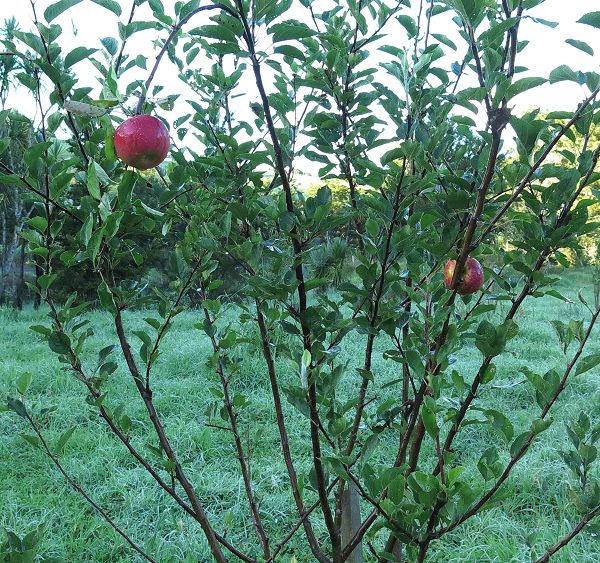 Stephan has mown the orchard a few times, but we've not attended much to it otherwise over the last few months, just leaving the trees to grow; but here's fruit!  Beautiful apples on a Kidd's Orange tree and there was a well-formed apple on my birthday Ballarat, which I took home with these two inside my shirt. 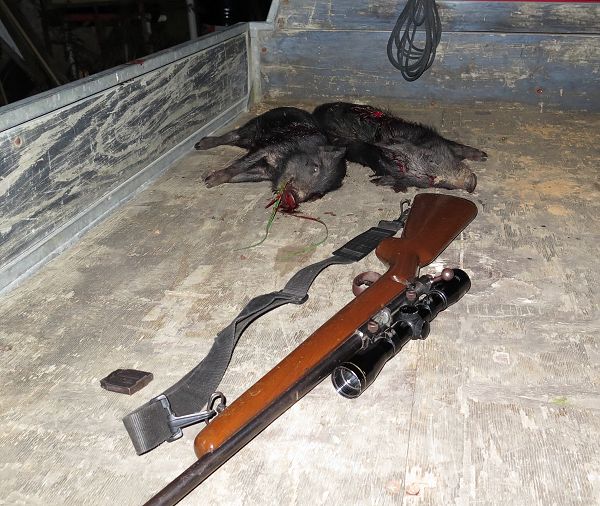 We went pig hunting together at dusk.  Driving along the Mushroom track I saw a flash of black ahead and so we stopped, I got out and promptly shot these two pigs, almost before Stephan had seen them.

Wednesday the 1st of April 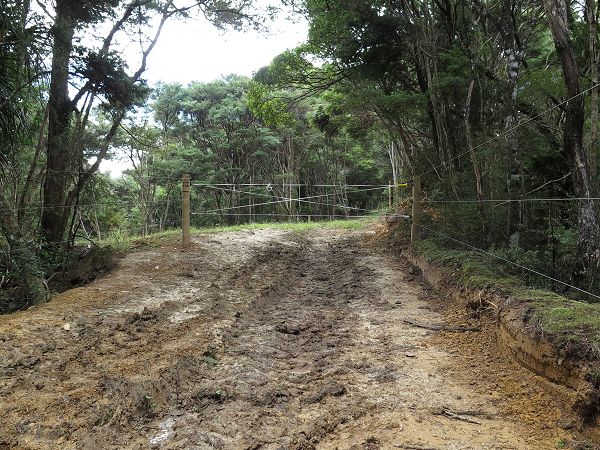 This track is just back down and around the corner from this bit.  We decided to put a gate at the top of the track to stop the cattle congregating at the bottom by the stream.  I don't like them gathering in narrow areas because there's too much bullying and shoving when that happens. 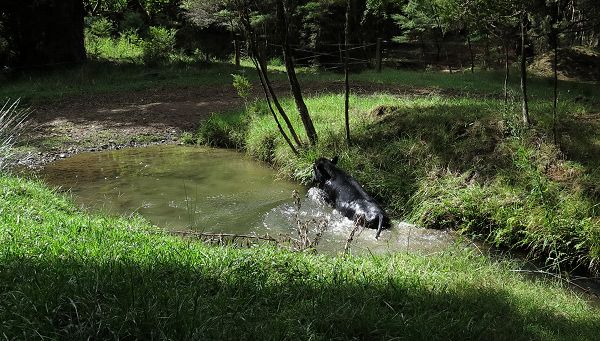 Oops!  She didn't anticipate the depth of that bit of water.  I think this was Demelza's daughter Eileen 143, who wandered onto the little area on which I was standing, down into the stream to the right, then along the stream bed and into trouble.  If she'd walked back along the grass to our left, she could have crossed the shallow bit at the normal crossing. 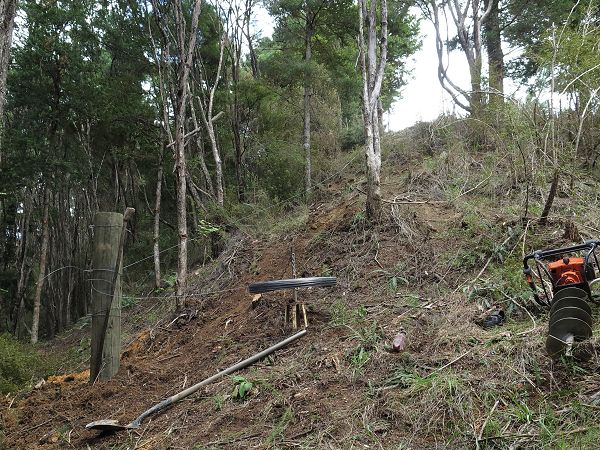 If I turned around from the previous photo and walked straight ahead, I'd have ended up on this slope, heading up the Small Hill, beside the Pines fence.

I went up to help Stephan pull out the next fence wire.  They're quite long runs around a lot of bends and it gets really hard to pull the wire by the end, so someone in the middle pulling it along is a great help.

This is the 80-year-old fence between the Small Hill and the Pines, which will be removed in due course.  At the moment there's a big underground wasp nest in the way, which needs to be killed before anybody does anything here.

The nice bit of green at the top left is the ridge at the top of the Swamp East and Camp paddocks. 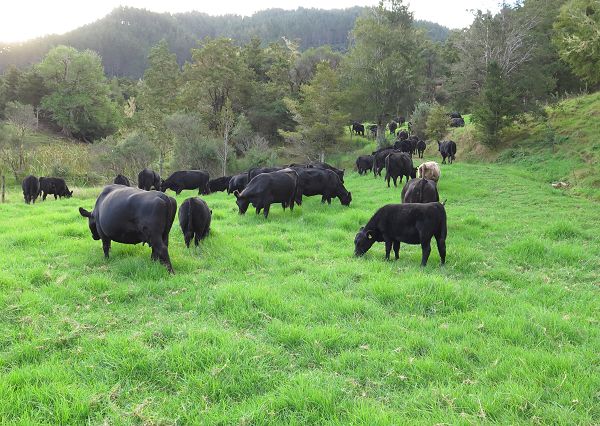 The grass is growing so quickly now (autumn is Kikuyu's best growth time) that I'm able to flick the cattle around the farm very quickly, keeping it under control and feeding them better than I was able to during the drier part of the summer. 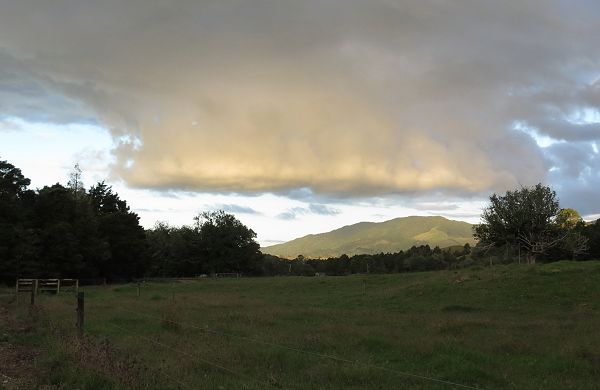 What an interesting cloud.  I took the photo just before 7pm, daylight-saving time. 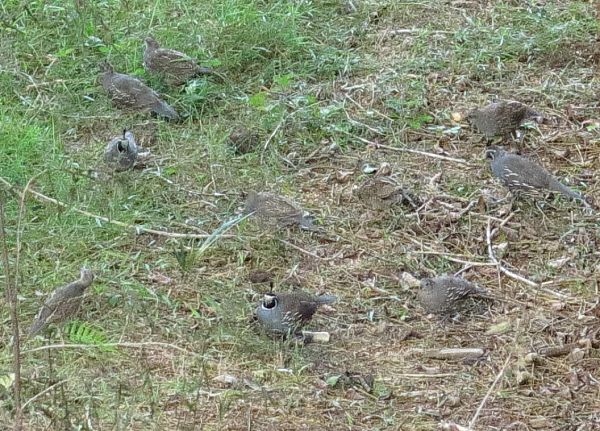 A long shot from up the hill to an area under a big Puriri where this family of a dozen or so Quail (ten in this picture) were foraging.  They scattered whenever I got any closer. 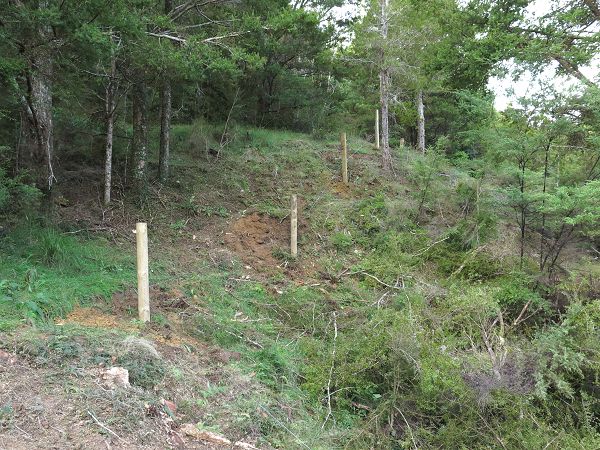 The Small Hill paddock is most of one side of the big hill in the middle of the farm.  It has a number of areas which were obviously once slip faces, where the earth slumped down as underground water moved from deep in the hillside.

We walked around several times looking at where we needed to fence the stock off those steepest slopes and where they could conceivably walk to get to the flatter places which also exist.  Over time we'll see whether or not we made good decisions.  At present it's all complicated by there being so much tree cover here.  On the old farm photo, much of this area used to be clear. 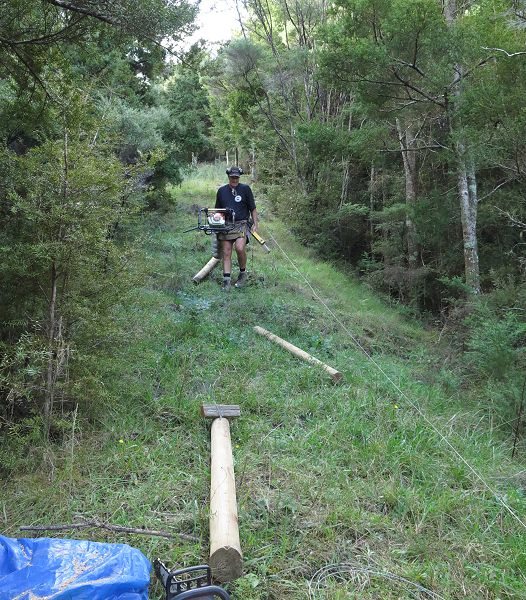 It's lucky the fencer is up to the job this year!

I'm always surprised by how hard it is to tell how steep an area is in a photo.  I was standing downhill from Stephan in this one as he made his way carefully down the very steep slope, carrying the post-hole borer. 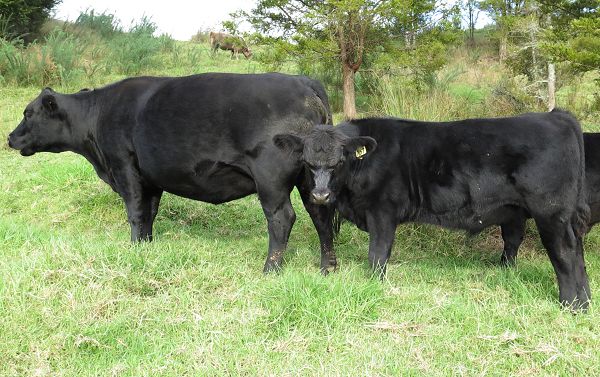 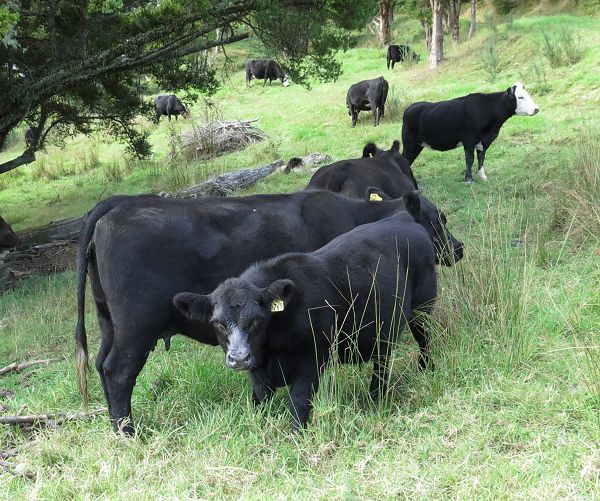 Little 729 has done really well with this lovely calf, especially considering his sire was an ancient bull with not terribly good growth figures.

729 is the grand-daughter of the last calf and only daughter of one of the early cows I bought, who always produced great steer calves and I kept her for just one more year in the hope of a heifer, which she then produced.  729's elder sister went into the freezer, because she couldn't get in calf, so it's nice to see success here - although 729 was rather slow to get back in calf this season.  Hopefully that won't become a pattern.