The week beginning the 4th of April 2015.
Saturday the 4th 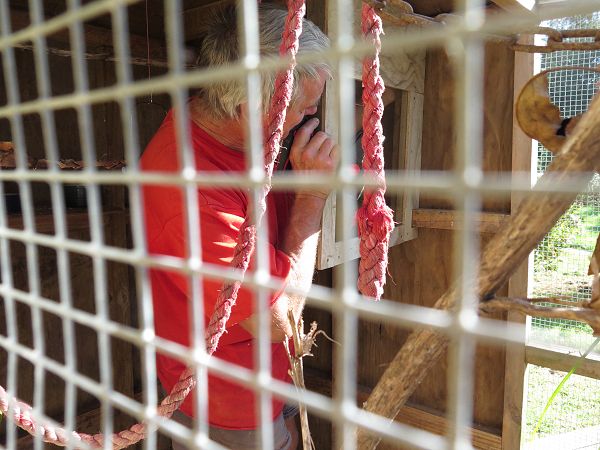 Before we add any more birds to the new aviary, we wanted to alter it a little to provide some extra shelter within.  Stephan built a frame to provide a windowed part-wall through which we can see the birds - and the glass means they don't have a horribly dark corner as their only warm place to roost.

The three birds in there were very excited by the presence of a large human in their space and looked quite exhausted by the end of the day after a lot of flapping about. 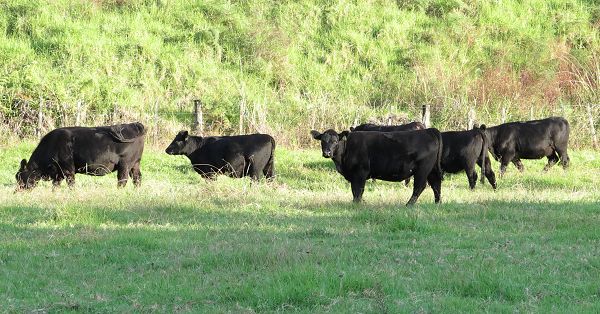 The seven non-breeding heifers are looking lovely and glossy and smooth now.  It'll soon be time for the elder three (including 721, the C-section heifer) to go off to the works.  We might have 730 done for home-kill, if we can find a butcher.  (Our lovely usual-butcher, Sniff, has been unwell and is not currently able to provide that service.) 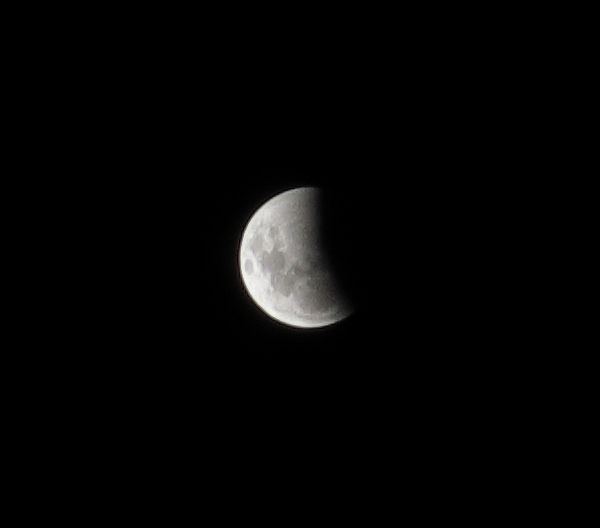 I kept looking at the moon during the evening, wondering when the expected eclipse would begin.  It wasn't until we'd gone up to bed that we noticed the first shadow and Stephan said he'd like to watch it.  It wasn't quite in the right spot to watch it in warm comfort, so we spent the next two hours out on the deck, watching as the Earth's shadow progressed across its face, eventually giving it a gentle, rosy glow.

Whenever I watch television programmes or films from the Northern Hemisphere, the moon looks weird.  If you're from up that way, does this moon look strange to you?  There's no man in that moon, only a weird rabbit. 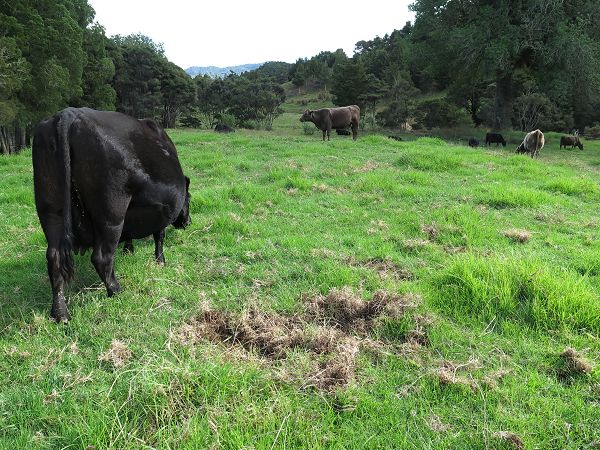 Damned pigs.  I hate seeing this sort of damage; it makes me very cross.

Yesterday I had opened the Big Back North to the Bush Flat for the cows and calves to make their way down as they were ready.  Most of them came, but five calves weren't there.  I figured they'd eventually turn up when they wanted a feed.

Early this afternoon I moved the mob into Mushroom 3 (above photo) and still couldn't find those missing calves, so went to the Big Back to look for them.  I found three and sent them along to their mothers, then found one of the others I'd been looking for already in the mob.  But 761, son of 723, wasn't there.  It's hard to find one small animal in a mob of so many cattle, so I went round the whole lot of them about three times, hoping to find him tucked away behind someone else; but he wasn't there at all. 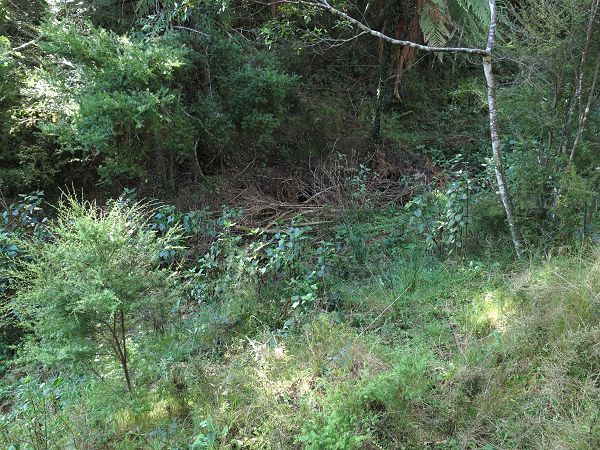 I had been right around the Big Back Paddock earlier on the bike, stopping for a while in a couple of places to cut some late Ragwort, without seeing or hearing anything.  I went back to try again and when I was half-way up the first hill, heard 761 call from down along the top edge of the Swamp.

I thought he might be walking along, but the calls didn't move and as I walked down toward this gully, I heard the troubling splosh of an animal standing in a hole in water - and still couldn't see him until he called again and I was able to pin-point his location, somewhere in the middle of this picture. 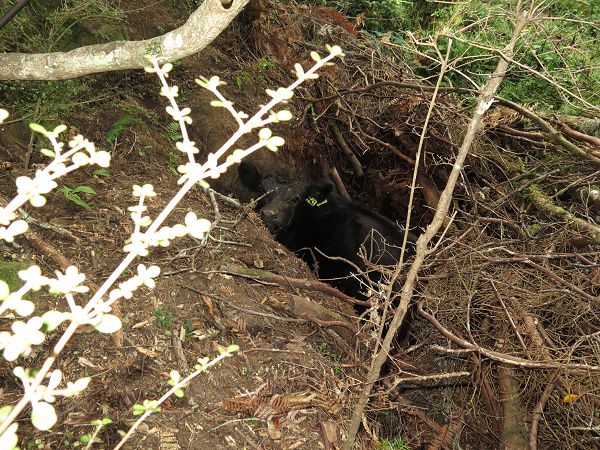 Poor little guy!  He'd either slipped in on his own, or someone must have pushed him as they came down the slope to the left.  He couldn't turn around, could only move back and forth a little bit and had obviously spent some time rubbing his head in under the bank, probably trying to find a way to get out.  He also couldn't really sit down, since the bottom of the hole was full of water.  He must have been very tired. 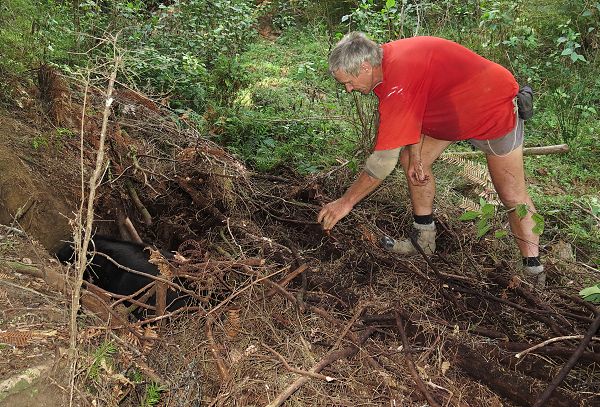 Stephan was not far away, so I called him on the radio to come and help me get the cut trees and branches out of the way so the steer could climb out of the hole. 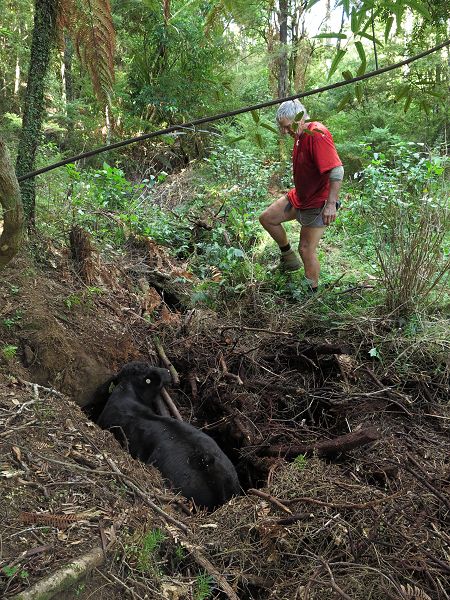 761 is a quiet little calf, but as soon as I approached him I could see he was quite distressed, primarily due, I believe, to being hungry.  Cattle can get really upset when they're low in energy, just like people.  He'd very likely been in here for more than 24 hours. 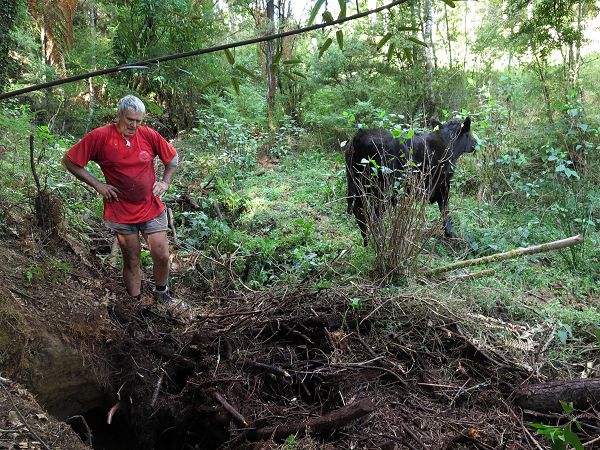 As soon as enough of the pruned tree matter was removed, 761 jumped up, clambered out of the hole and stood on the slope.  He was very weak and shaky, so we walked him quietly along toward the track down to the gate.  He tried to eat everything green he could see. 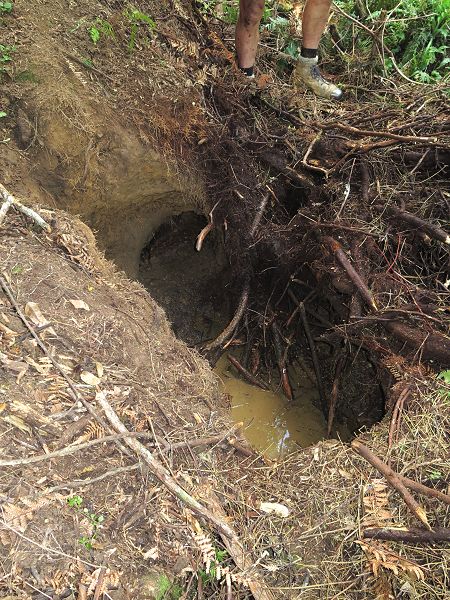 If Stephan hadn't spent last summer lying around doing nothing, this gully would have been fenced by now.  We're lucky so few animals have got into such trouble, although when they do, they really are stuck.  Fortunately this one was easy to rescue and the outcome was good.

This would be a cold place to lie down and die if nobody came to find you.

It's unlikely it'll be fenced before this winter either, because the riparian fencing project has taken precedence, but this and other gullies like it are high on my list of the places I'd like to see done. 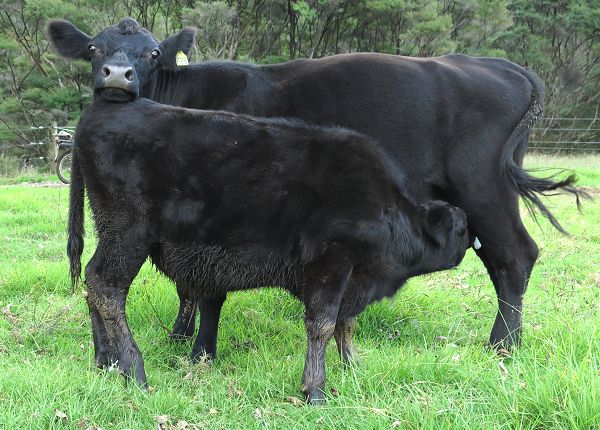 761's mother, 723, had been strangely quiet when I'd checked her each time I went around the mob looking for her son, although I had noticed that her udder was uncharacteristically full before I moved them earlier on.

But as soon as she heard her calf calling as he came along the lane toward the paddock, she came running over, calling frantically.  She appeared just as distressed by the separation as he was and they quickly settled down for a mutually comforting feeding session. 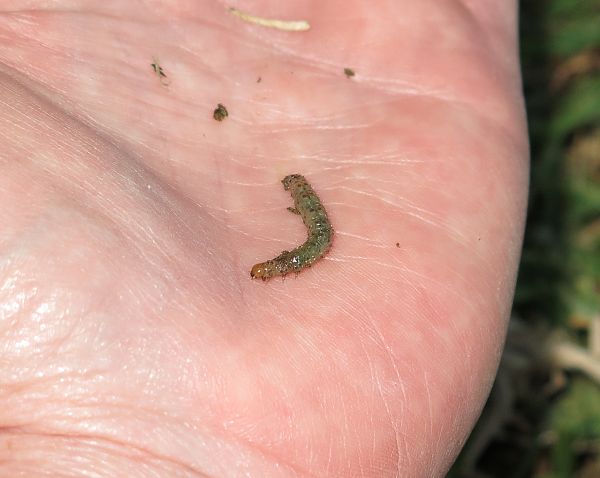 After that excitement we were late going out for a pre-arranged visit to Lynn and Kees, to receive instruction as their stand-by farm consultants for a young guy who was going to stay at their place while they went away for a couple of days.

Up on the northern peninsula Tropical Grass Webworm is a regular problem at this time of year and this is one of them.  Whole areas of Kikuyu were stripped back as though a huge mob of sheep had chewed it to the boards.  I'm extremely glad we don't have it!  I gave this one back to Lynn, who grimly squashed it. 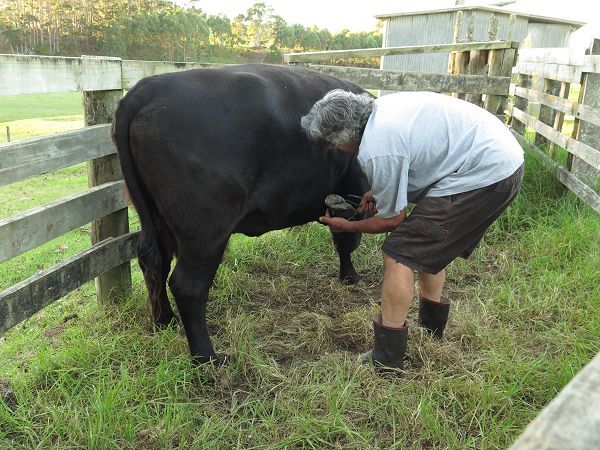 On our way back to their house, we stopped so Kees could do a bit more trimming to the front hooves of a very lame cow.

This is impressive handling, or impressive temperament, in a cow from an ordinary herd.  They're not usually this cooperative and being able to pick up a foot and work with it without restraining the cow in a race and/or head-bail is unusual.  She's the daughter of one of the earlier bulls I sold to Lynn and Kees. 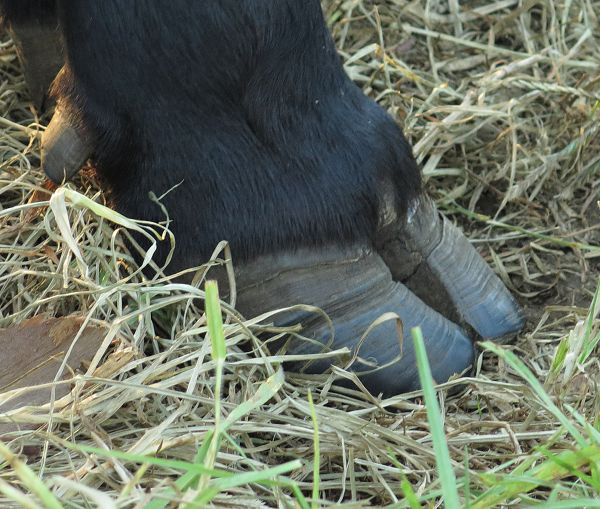 The cow's problem was an interesting one, presumably related to a Mastitis infection she had very early in her lactation.  Her hoof growth while she was dealing with that health challenge appears to have been interrupted, so that now her hooves have cracked across the weak point where they would have been growing then.

She was pretty uncomfortable, but able to get around and a subsequent veterinary visit helped her with pain relief and further trimming. 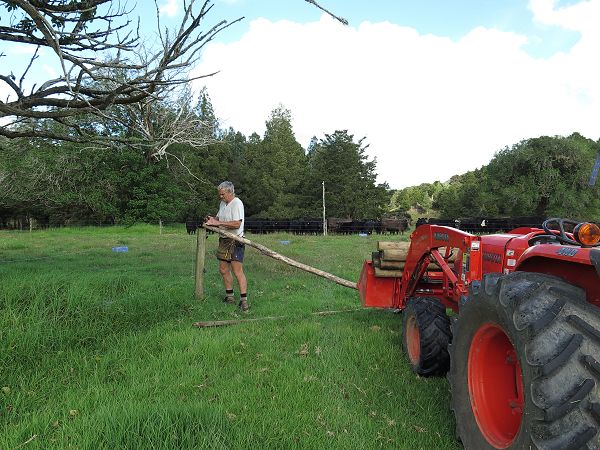 The "islands" around the Puriri trees in several of our flat paddocks are fed by overhead wires slung between long Kanuka poles.  (At some stage when we're rich we'll buy lots of underground cable and bury them, but in the mean time this works reasonably well - as long as I remember to mark them for Ryan when he's spreading fertilizer.)

Many of those poles which were erected around the same time a few years ago are now falling down, so Stephan has been going around replacing the poles as I've needed to use the paddocks. 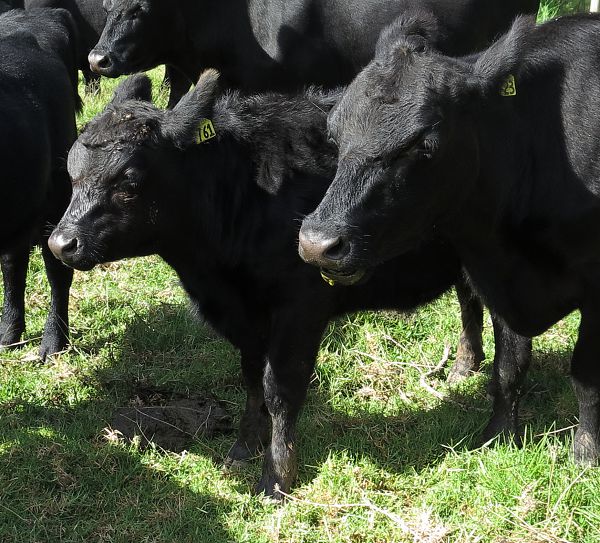 The cows were all waiting in Mushroom 3 for Stephan to finish the job.

761 seems to be alright, after his uncomfortable experience, although I worried that there was something amiss, standing with his ears back like that, but he seemed otherwise normal. 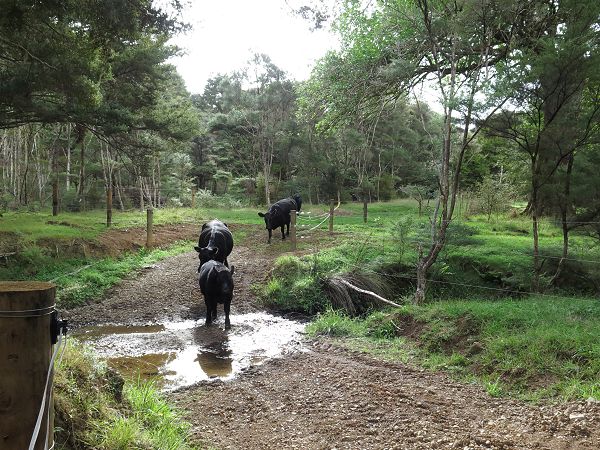 First time through the new crossing!

The cows and bull calves have been in the Swamp East paddock for a few days, but they're hard to keep an eye on there and I'm tired of going looking for the independent little bulls, so brought them over the stream to the Frog this afternoon. 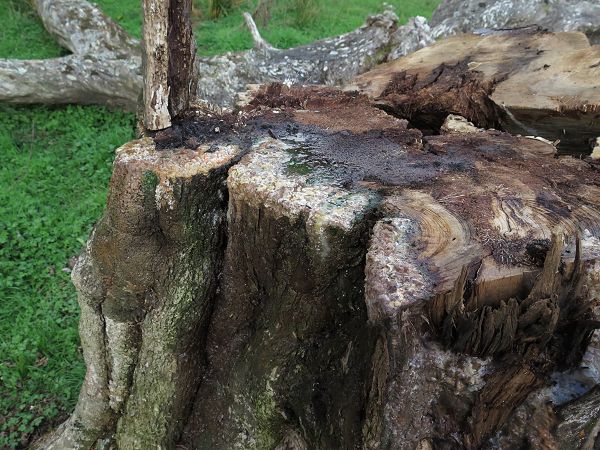 The felled Puriri stump is pumping out sap from its injured surface.  If we protect it from browsing by the cattle, it should sprout.  In the mean time there's the problem of the rest of the tree in the way of a new fence. 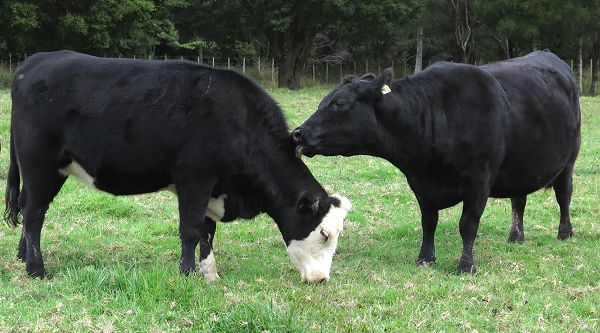 I'd been taking comparative photos of and looking at very fat 701 and her contemporaries 703 and Endberly 700, who are both thin and rearing calves.  Then 701 went and stood with her little sister, 746 and they had a mutual licking session.

These two are very nearly full sisters - three quarters of their parental pedigrees are the same and in the other quarter, 701's grandmother is the daughter of 746's grandmother.

There will be a test at the end of the page. 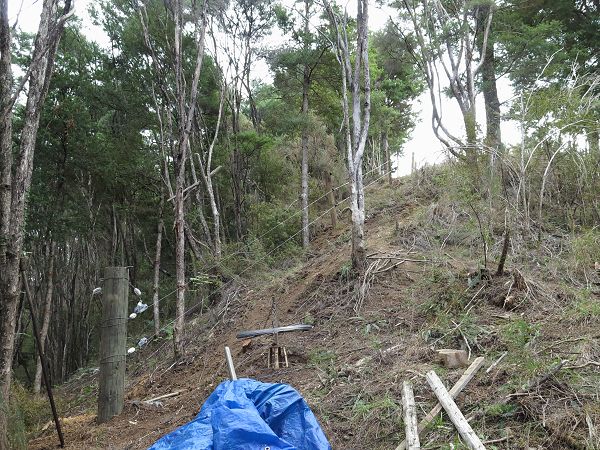 Stephan finished this bit of fence today and then cut and altered the fence which comes down the ridge between the Small Hill and the Pines, so that the far end of the Small Hill is now a paddock on its own.  This end will join in with this side of the Pines, when it's all finished.

I'm going to have to work on a new farm map! 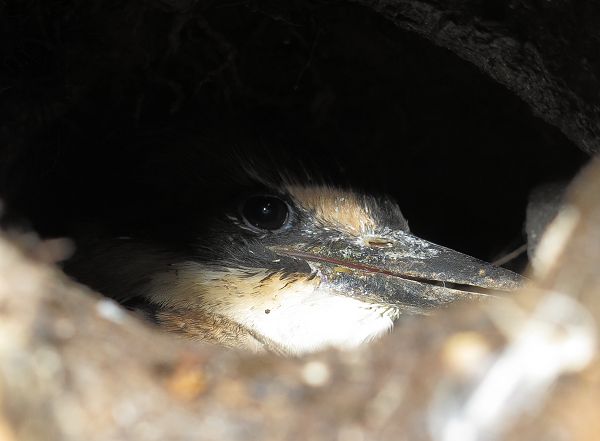 After helping pull the last wire up and around that fence, I weed-wiped some of the Sedge down by the stream.  While working I heard the characteristic "grumpy old man" noise of a Kotare (Kingfisher) chick in a nest.  It seems very late for them to be nesting, but here were at least two chicks in a hole in the stream bank. 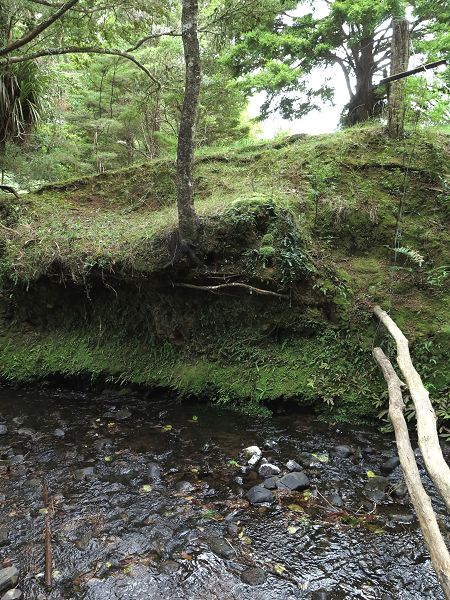 The nest hole was just beneath the base of that tree in the centre of the photo.

I came back a day or two later to see if I could take more pictures, but the chicks had gone. 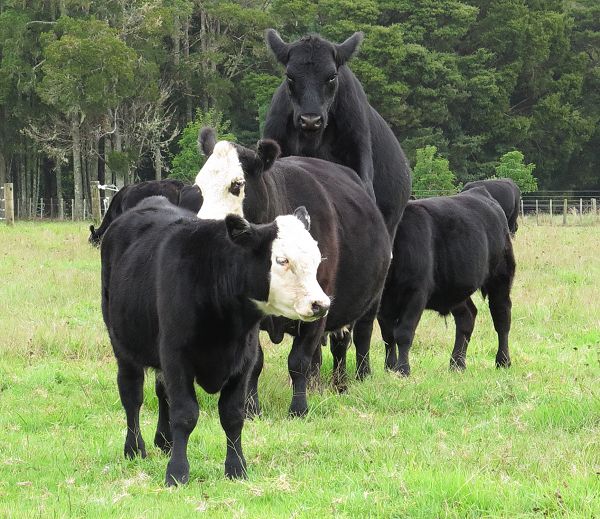 Oh, well that's that then.  517's future was already in question because of the growth on her eye, with the possibility that it is the beginning of "cancer eye" which would necessitate culling her from the herd before very long.  That she now appears not to be in calf makes that decision easier for me for this season.

The white-faced calf is not hers; her last calf is a lovely black steer.  The two sisters up the page are her daughters. 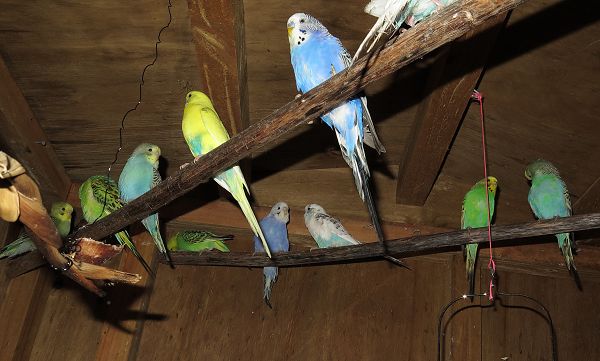 We went to town to get our 'flu vaccinations, something we've both been doing for the last few years.  They didn't even hurt and Stephan said he felt very little discomfort later either; I had a tender arm for a few days.

I posted five copies of New Zealand Lifestyle Block off to Canada and the US, costing a whacking $15+ each for the postage!  Those five people had kindly contributed photographs of some of their cattle for use in a column I'd written and for which I didn't have enough specific pictures of my own.

Then we went to see and collect the Budgies.  There were eleven already in cages and I went with their breeder and she caught another three, so we came home with fourteen in three travelling cages.  I took some pictures of them before I let them out, making sure there were none exactly the same as our three residents and then put their cages into the bottom of the Aviary and waited for them to find their way out into the larger space.

They're so pretty and we're delighted.

Then off out again in the evening, down the road to share a ride with another couple in to town for dinner with our friend Gillian.  We had a lovely evening.