A large crowd of people suddenly arrived this afternoon, with buckets and bowls in hand, looking to pick blackberries.  Because most of them were children and some of those who weren't were foreign exchange students, we supplied them with maize to carry out in their containers, to feed to the sheep on their way to the blackberry patch.

Once the maize was all fed to the sheep, the walk continued to where the blackberries grow.

Because our spring was so cold, we're having an excellent, but very late, blackberry season.  For the last couple of years I've picked the first few fruit around the end of December, but this year the blackberry ripening has been delayed by several weeks.

Ms Duck and friend Flamingo, sitting around the bath, having an evening chat. 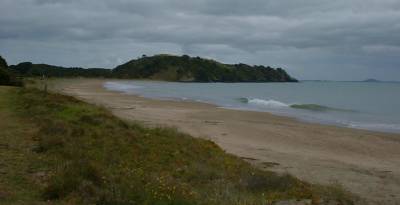 Today we had a day off.  Gisela needed to get a Warrant of Fitness for her car and had booked it in at the garage at Taipa, so we could go to the beach as well.  We even went for a swim.  It was a bit cold, but quite pleasant. 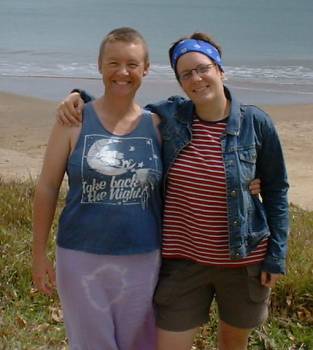 Then we went along to Mangonui and had a look around the shops which sell local crafts and talked to a few people and bought a nice book and had a cup of coffee and a cake with spider-webs on it (had they dropped some of the walnuts under the table and then fished them out again to garnish the chocolate slice?).  It was somewhat off-putting and their response to my complaint was appallingly unsatisfactory.  I'd say if you go to Mangonui, don't eat at the Waterfront Cafe!
On the way back home again we had an icecream, as usual, at the Cable Bay store, which has long been famous for great icecreams in cones.  It would appear that every new owner of the business has undertaken to continue that tradition.

Jill & Bruce came to visit today with Bruce's son and grand-daughter and they all went out with Stephan to pick blackberries.  Meanwhile Gisela and I did a bit of cattle weighing and gave the youngest of the calves their booster vaccination. 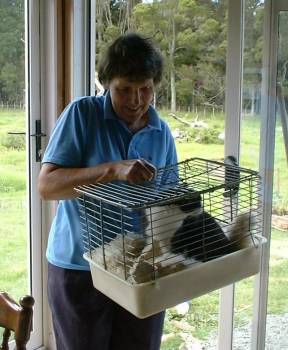 When they left to go home again, they took an extra with them.  We've been trying to find a home for Foxton Beach for several months, since she has unceasingly harassed L.C. (Elsie - the second of our cats) since I first brought her here.  Foxton will now live in Kohukohu with Heidi, Bruce and Jill's other cat, whom we hope has a more assertive personality than L.C.

Eight weeks ago we put the bulls in with the cows and so it was time to take them out again.  I wasn't sure how they'd react to meeting each other again, but after a bit of pushing each other around, they settled down quite well.

The three mobs of cows and calves (one for each bull and one for insemination) have now gone off to the back of the farm with the younger cattle.  Mixing four lots of cattle (94 animals in all) together was quite exciting.  They ran around like mad things and there were pushing fights everywhere for a while.
Generally speaking, we don't mix the age groups up quite so much, since their feed needs are different, but we need to clean up the excess grass before we spray the beheaded ragwort plants and 94 animals will do that more efficiently than a smaller mob.

This year, particularly because we had Gisela here, we decided to go to Waitangi for Waitangi Day.  We got up very early and set out for the hour and a half journey and arrived, just on time, to see the Waka launching ceremony at the beach opposite Te Tii Marae.

We then wandered around to the Treaty Grounds and found a seat near the Whare Waka (building in which the largest of these Waka is kept) and watched and listened to the proceedings.  The day was surprisingly informal, with a strange sort of 'family picnic' atmosphere.  From talking to some people and watching and listening to many, I surmised that a large proportion of the lighter skinned faces were of people from other countries, just pleased to have happened upon a day when they didn't have to pay to get into the Treaty Grounds to have a look around.

The highlight of the day for me, was watching and listening to a group of Ngapuhi (the people of the local area), who spoke and sang to the assembled crowd mostly in te reo (Māori language), much of which I was able to understand.  The greatest frustration of the day occurred at the same time, in the guise of a very rude man who insisted on talking loudly throughout that time, despite being asked to desist!  (A little more assertion became necessary to reinforce my request.)

The Waka all went out again in the afternoon and disappeared into the bay.

On the 6th of February 1840, Waitangi was the place at which the largest number of people signed the Treaty of Waitangi, which was then taken around the country and signed by many others in other places.  That Treaty formed the basis of a formal relationship between the incoming settlers from Britain and Māori , the indigenous peoples of Aotearoa.  The treaty was subsequently variously ignored and misinterpreted, to the detriment of Māori , from that time.  Many people believe that the injustice continues, since one of the particular promises of the Treaty was in the area of sovereignty and self-determination for Māori .  Part of the problem occurred because of differences between the meanings of the Treaty in English and in Māori .  Thus Waitangi and the day on which the signing of the Treaty is commemorated, has become a focus for protest against it and the ways in which it has been administered by New Zealand Governments.

I believe that the majority of pakeha in Aotearoa think the Treaty belongs to and is about, Māori , but the treaty is about both pakeha (European/non-Māori ) and Māori and is the basis on which we reside together in this country.  The treaty in itself, is why the rest of us have to be interested in how it was and is, administered and how recompense for past injustice is dealt with now.  Many pakeha in this country believe that the past should stay there and that we should all just get on with the present.  Most Māori want the injustices perpetrated in spite of the treaty to be sorted out.

One hundred and sixty-three years isn't a very long time, when your culture is strong on oral history and perhaps you have heard your grandparents talking about their grandparents' recollections of 1840 and what they thought of the treaty at the time of its signing.  Then when you hear more recent stories of land confiscation, discrimination in law and practise, punishment dealt to children for speaking their own language etc. etc., perhaps you have reason to stay angry about it and you don't have a lot of patience with the descendants of the people who perpetrated those injustices, telling you you ought to forget about it and get on with your life.  The fact that most Māori are at the bottom of the nation's socio-economic statistics and that the education system fails many Māori children and that the 'justice' system consequently deals with more Māori on a population basis than any other group doesn't allow much 'getting on with it' either.

Being an activist on other issues in times past, I have much sympathy with those at the "sharp end" of the protest about treaty injustices.  To create social change on any issue, someone, somewhere has to metaphorically poke people in the eye with their anger about the status quo.  Gradually the general population gets to hear about the issue and the level of dissatisfaction felt by the protesting group, and so more people begin to consider the issues.  Thus public opinion is gradually moved in a way that would not happen if people only politely talked about their grievances.  Protest is uncomfortable for many, but necessary for change to begin to occur.

We left Waitangi at about 2pm, going back to the car where we had food and drink.  We walked past the camping ground next to Te Tii Marae, where stalls and information booths were set up and heard the call to gather for the hikoi (march) to the Treaty Grounds in protest against the Ngawha Prison project (Ngawha is within the Ngapuhi area and the building of the prison is strongly opposed by many).

When we left Waitangi, we went to Haruru Falls, just up the road, and sat and ate our picnic. We went to Cable Bay for a swim and another ice-cream and happened to be in the shop just as the 6 o'clock news began on television.  There was coverage of protestors being arrested on the Treaty Grounds (amidst a huge crowd of police), but the media are terribly good at surmising an on-the-whole quiet day's events in a moment's picture of protest, sensationalising the issue and not ever spending enough time carefully covering the issues behind the protestors' actions.

Please feel to contact me if you feel I've missed something important in this brief coverage, or if you have any questions I might be able to answer.
Having watched a couple of tourism videos recently with Gisela, I've become rather suspicious of the impression foreign visitors are given about Māori .  They are not conveniently hanging around to sing and dance and poke their tongues out for the delight of visitors.  Singing and dancing for visitors is not the extent of Māori culture in the modern world.

Gisela, who had been planning to depart during the weekend, heard about an event she wanted to attend in Auckland this evening, so began packing up her gear. 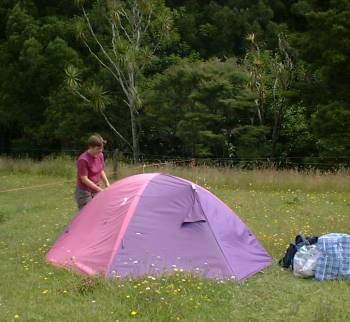 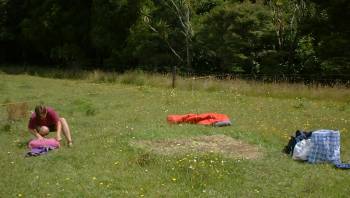 It's going to be very strange, not having that little pink and purple thing out in the paddock.
We took the last photographs and off she went.  We hope she really will come back and spend some of the winter here before she leaves the country later this year. 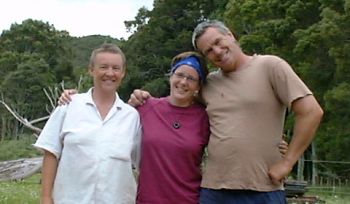