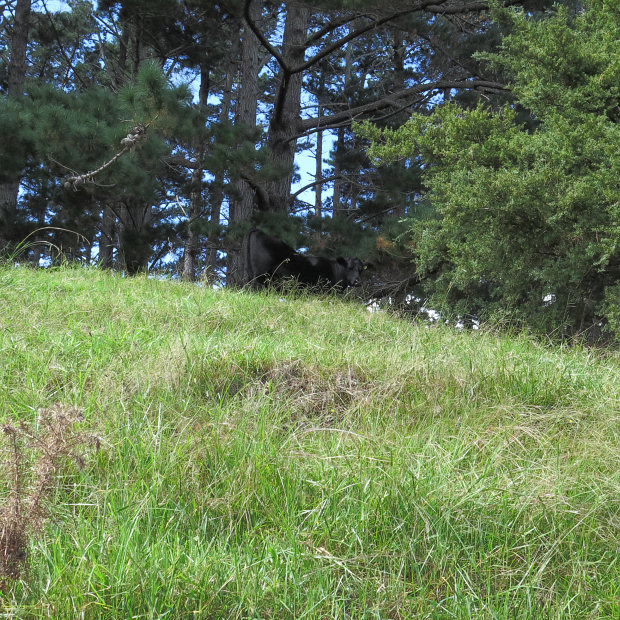 I called and called for the cows and calves to come down to the bottom of the Big Back North this afternoon and eventually had to climb the hill to find two young cows and three calves.  They were right up the top by the Pines fence, happily grazing, completely ignoring me.  This was 742, Curly's daughter, who is often tucked away in a corner somewhere when everyone else has come to my call. 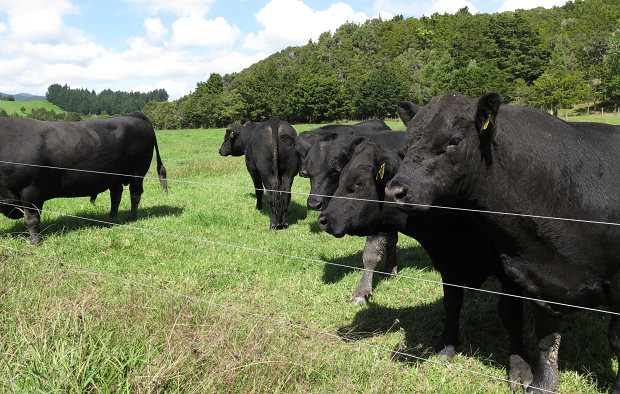 Once they were all gathered and accounted for, I opened the gate and followed them along the lanes, all the way in to the yards.

The bulls all gathered together by the gate as the cows passed.  Dinky 94 is probably on heat and the bulls would very much have liked to help her with her fertility issue. 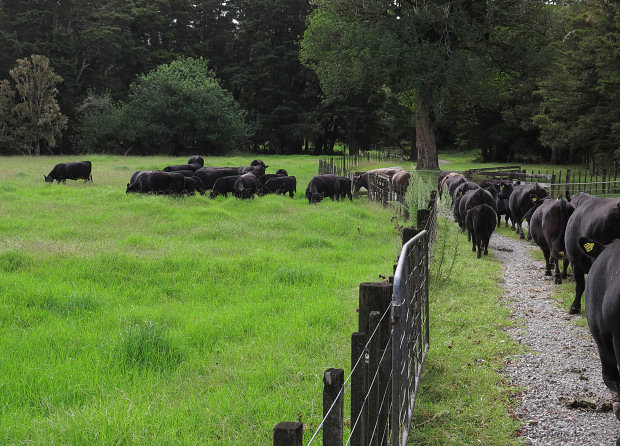 We put everyone through the race, drafting groups of calves together or groups of cows, whichever was easier as they came up into the top pens, injecting copper into every neck.  With two of us working, it all goes very smoothly and quickly.

Afterwards we let them into the knee-high grass in the Pig Paddock, about which they were very happy. 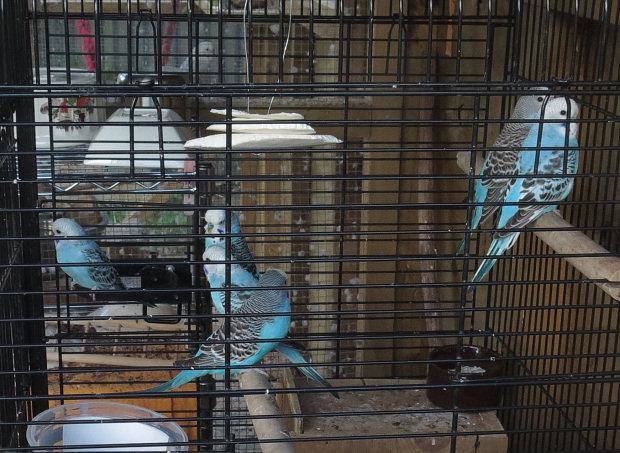 Through the back window of the aviary I could see Loofah and Eco and their four lovely babies.  They're in this separate cage until I'm sure they've taught their chicks all they need to become healthy, independent birds. 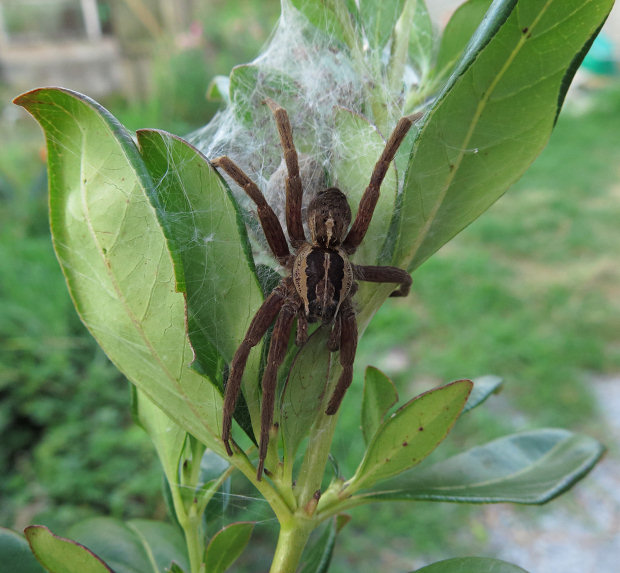 I regularly cut sprigs of Karamū like this one for the budgies (part of pruning the trees along the fenceline on the back lawn) but hadn't noticed this beautiful spider and her nest.  I placed the cut branch back into the middle of the tree, hoping she can hatch her babies in spite of my accidental interference. 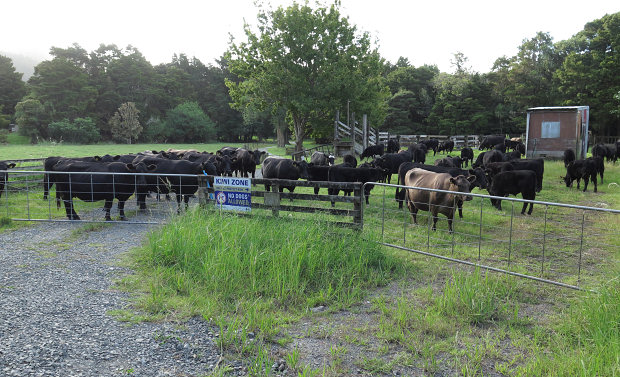 The 70 cows, calves and heifers (two) were very ready to come out of the small Pig Paddock this afternoon and waited here in the roundabout while we set up the gates Over the Road, before shifting them across.  We waited until nearly 6pm, so there would be no logging trucks. 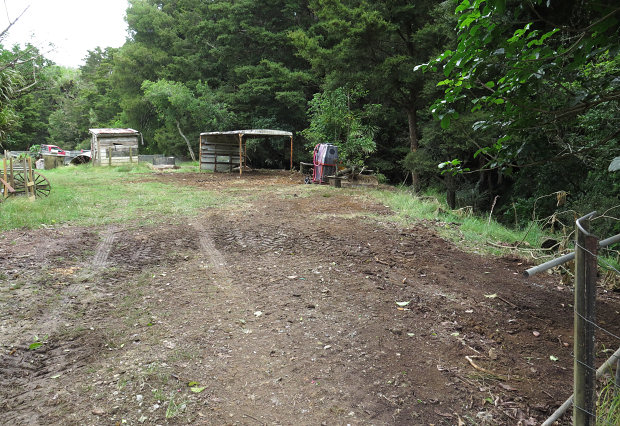 This cleared area was previously piled with all manner of rubbish, which has now gone out of our lives in the big skip bin.

We recycle as much as we possibly can and try not to make much rubbish.  The collection here was that of several years, including quite a bit of stuff we'd retrieved from the old pits in which farmers of years past had dumped rubbish in the Tank Paddock and which had started coming up out of the ground again as the underground water movements shifted things around.  From those areas we'd taken and recycled any glass and plastic, but needed to landfill the rest, which is what has now been done - in an appropriate landfill site, not just another hole on the farm.

It was an embarrassing mess and we're both glad it's gone. 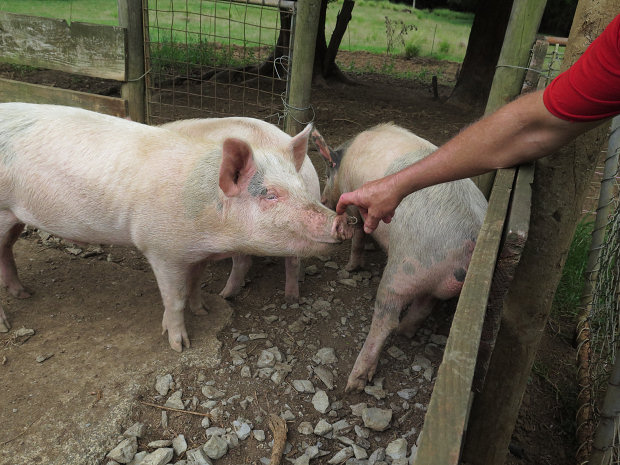 The pigs continue getting bigger every time I look at them.  The nose clips didn't work to stop them rooting up the ground.  Next time we'll use the proper nose rings and put them through the middle of their noses, as Stephan used to do.  He couldn't buy that tool and those rings when he tried to earlier this year. 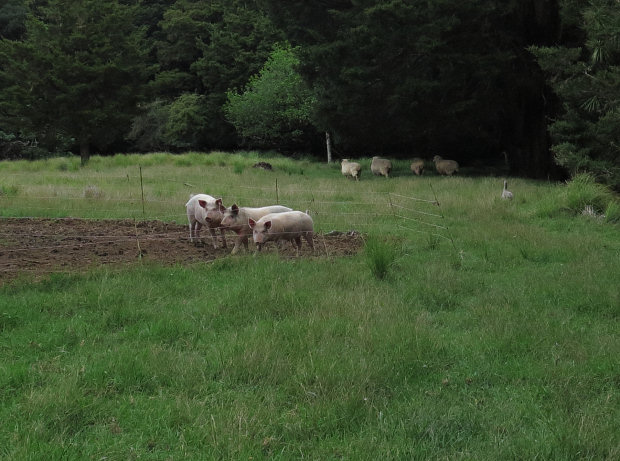 Looking at the sheep, we could see a couple of them twitching, which could indicate fly-strike.  The weather forecast for this week includes some heavy, warm rain as another ex-Tropical cyclone comes our way and that will create excellent conditions for flies.  The wool on these animals is a lovely length to maintain a warm and damp environment for maggots to thrive, so we decided we had to get them in and shear them.

Stephan set up the gates at the sheep yards and we tried to get them in.  But without any tame sheep to come toward us as we shook some maize, it became really difficult to make them go where we wanted.  Here they were running away down to the end of their paddock. 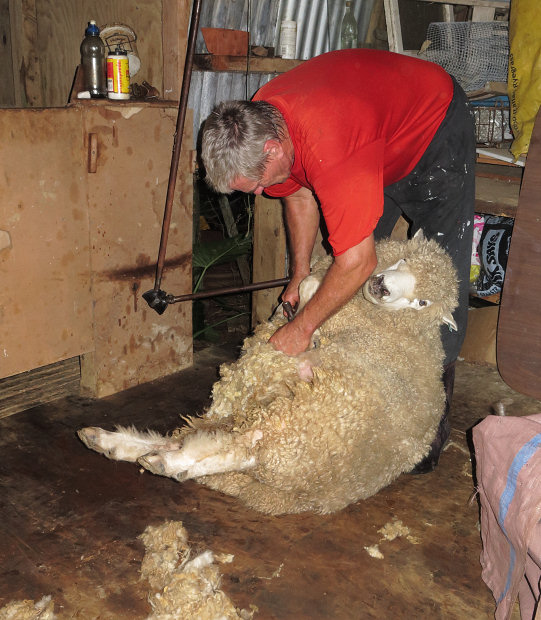 After a bit of yard "modification" we got them into a corner and in to the yards, then up into the covered pen to wait while Stephan got everything ready.

This monster is Yvette's daughter and wrangling her into position nearly finished Stephan's career!  Having never lambed, she's grown enormous and fat.

One of the ewes was just struck, with a few maggots on her belly.  This was a timely intervention and should keep them safe from strike for the next few weeks while the temperatures are still warm. 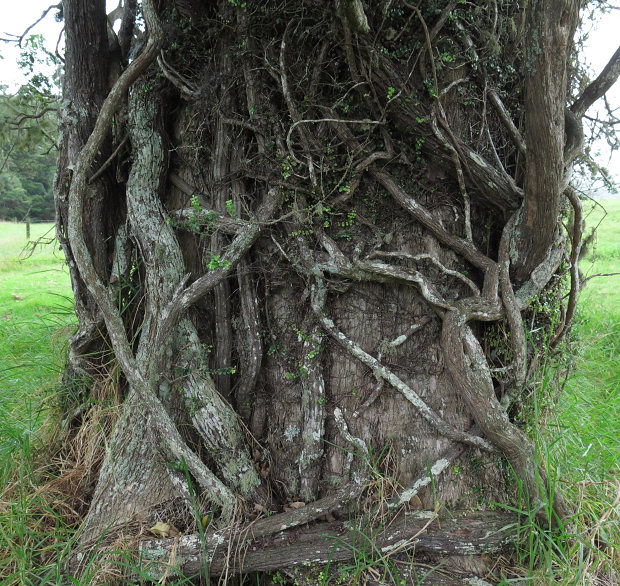 During a short shower of rain I sheltered under this big Puriri at the end of the Mushroom paddocks while I waited for the bulls to come out and move into their next paddock.  The vines are Rata, of at least two varieties: the biggest will be Northern Rata, with its canopy high up in the top of the tree; the other is the white-flowering vine whose foliage appears all the way up the other (sunny) side of the trunk. 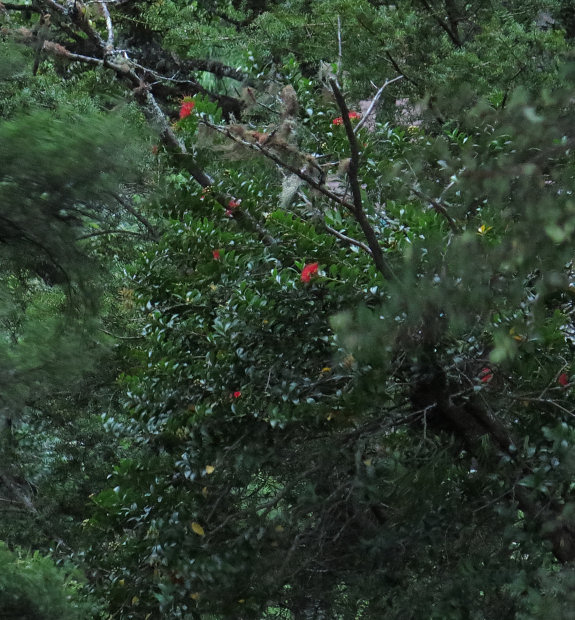 Both of us went Over the Road late in the early evening to check on the big mob of cattle.  Blowing about in the increasingly blustery conditions I noticed these red flowers of a Rata Vine in the trees down the slope, on the bank beside the road.

Since booking my flight the other day, I have been watching the weather forecasts with increasing concern.  The storm forecast to hit here this week looks like it will be at its worst on Thursday morning, just when I need my flight to be exactly on time to get me to Auckland.  I think it increasingly doubtful that the trip will go to plan.  Because the only fare available when I booked had been the $200 one, I was able to change it, so have put it on hold and have booked a bus trip instead.

Today we drove over to Kerikeri for me to catch the bus just after 1pm (to travel from Kaitaia, I'd have had to leave really early this morning, with the possibility of travelling with the driver who doesn't keep to the left!) and I spent the next four hours sight-seeing my way south.

Nadene picked me up in Auckland and we went out to dinner together, before she dropped me off at my little hotel in Remuera for the night.

At home Stephan was dealing with the after-effects of the very stormy day, the water having gone off again, which meant having to rearrange some of the cattle so they'd have access to stream water for the next couple of days.

I discovered later that the flight I had originally booked to come down on this morning was an hour late leaving Kaitaia: I would have missed my appointment time at the eye clinic, had I maintained that plan.  I'd assumed it was the weather which caused the delay but when later conversing with Darren who runs the Kaitaia Airport, discovered the generator running the lights on the runway had failed this morning and they'd had to wait until the natural light was sufficiently bright for the plane to take off.  I am very glad I avoided all that.

I walked along to the Eye Clinic, narrowly avoiding being run down by the belligerent driver of a large, shiny, expensive 4WD vehicle - confusing road controls at what I thought was a quiet intersecting road, which turned out to be a high-speed short-cut for those in the know.

I had umpteen drops put into my eyes, a needle in my arm for the administration of sedative drugs and went in for the operation on my right eye.  It was vastly less awful than I anticipated, probably mostly due to the effects of the drugs which made me able to comply with instructions but unconcerned about anything else.  After a half-hour break for a cup of tea and some biscuits (while two other people's eyes were attended to), I was trundled back in for the operation on my left eye, which was a little less comfortable.  I don't think I had quite as much nice stuff in my arm that time.

Afterwards Nick put me in a taxi back to the little hotel and I went to bed for the afternoon.

Stephan arrived later on and we went out for a quick meal, before I returned to bed for the night.

I woke up in a cold sweat in the early hours, reliving nearly being run over!  That was the most traumatic part of my eye-operation day.

Back to the clinic this morning for Nick to check my eyes, which he says look absolutely fine.  From the inside, however, things are very startling!  When did Stephan get so old?  I closed my eyes when in the toilet/bathroom, so I couldn't see the mirror, for fear there was more horror awaiting my new vision: dreadful realities!  I had no idea my near-sight had been so poor, thinking it was only my far vision which was distorted.

I had been advised to have the lens in my dominant right eye made to provide clear long sight and the other with a shorter focal length so I can see clearly at arms' length.  I am doubtful this will feel very comfortable but agreed to the recommendations of those who presumably know.  While my brain did not ever adjust to wonky glasses, having lenses which are always in place will apparently force my brain to adjust; and this arrangement, "blended vision", apparently works very well for most people.  Let us hope I am "most people" in this regard.

Iphigenie met us at the clinic (she still looks as lovely as ever) and we went up the road for a coffee and sat and caught up with each other's lives.  We have many friendships which time seems not to alter.  It was lovely to spend a relaxed couple of hours with her.

Then, just before noon, we drove on to the motorway out of Auckland, along with half of its population heading north.  It took us two and a half hours to get to Wellsford, a trip which normally takes an hour.  We had a sporadic conversation with the driver of a house bus as we kept passing and being passed by him and his wife in the other lane: you make entertainment where you can.  Later in the trip we spotted them on the side of the road at Kawakawa and gave them a toot and a wave as we continued north.  We got home at six.

I have to instil three lots of eye drops four times each day for the next few days.  Some of them really hurt!