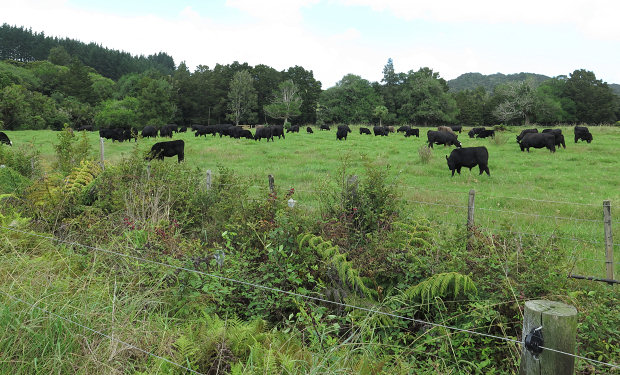 Seventy animals in Flat 1 ought to tidy it up a bit, after we moved the House cows to the House paddock.

The residual grass levels after grazing tend to be a bit high at this time of year.  I suspect from the cows' behaviour at times during the early autumn, that some fungal growth in the lower levels makes it comparatively unpalatable and that some of the associated toxins might affect how they feel - they're much more prone to being startled by things which aren't really threats.

In other places the fungus which leads to Facial Eczema (destroys the liver of cattle and sheep and causes light sensitivity and skin peeling, particularly around the face in sheep, hence the name) creates a high risk at this time of year.  While we don't appear to be affected by that on our Kikuyu-dominant pastures, I suspect there are other fungal issues.

Stephan spent the whole weekend with Oscar and his new wood mill.  His reports in the evenings indicated a great deal of fun was being had.  It's lovely watching nice men having the time and resources to do things they've always dreamed of doing. 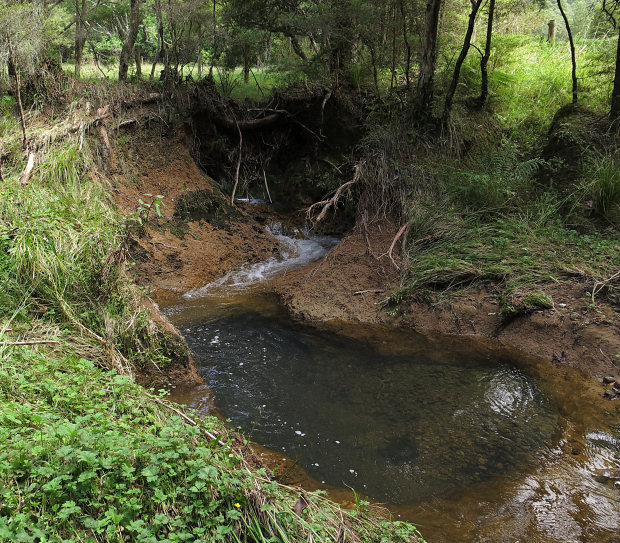 During the big flood two weeks ago, the stream must have been roaring through this new cutting.  Since then, green, wavy algae has already grown all over the newly exposed clay under the water. 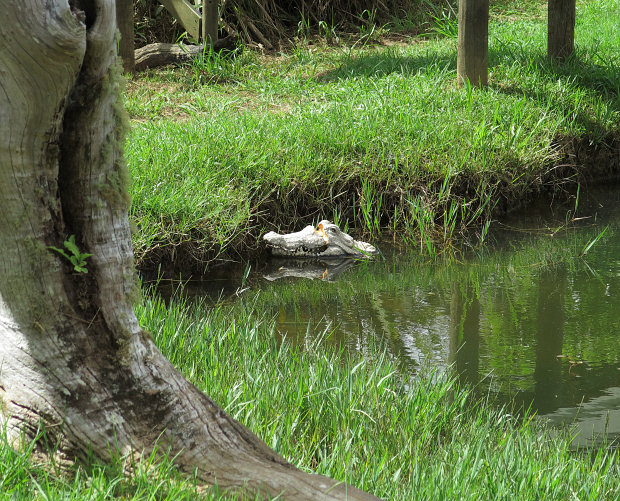 Poor old Croc, with a broken upper jaw, doesn't look nearly as happy as it did with an open, wide grin.  Age and ultra-violet decay have set in.  It happens to us all.

We got up early this morning, drove out the gate at 6.50am, which proved a very good time in terms of the number of logging trucks we didn't catch up with and have to pass on our way south to Auckland.  Usually we end up in many lines of large truck-slowed traffic.  We also hit Whangarei a little later than the last time we travelled through, missing most of its rush hour.

I dropped Stephan in West Auckland at Jorja's house, where he'd arranged to spend the day fixing a leak in her toilet, and I went and spent a couple of hours with Jill at Selwyn Village, joining her as she ate her lunch.  She was astonished to see me, asked if she'd known I was coming, which I assured her she had been told, repeatedly, and then she repeatedly introduced me to her table companions throughout the duration of their lunch sitting.

Then off to Remuera for the main purpose of this trip.

I have, as you may have gathered, been experiencing difficulties with my eyes for some time and, the optometrists having told me they could do no more with glasses to improve the clarity of my long-distance vision, I finally sought the advice of Nicholas, one of Stephan's nephews, who is a consulting optometrist to an ophthalmologist in Auckland.  I'd earlier been referred to an ophthalmologist within the (free) public system but while he'd reassured me that my eyes were perfectly healthy, he'd not explained why I couldn't see properly, so I did not feel entirely reassured.

Nick looked at and measured my eyes through an impressive array of machines and as he worked, became more and more reassuring that my problem was cataracts causing puckering of the lenses, which is the reason for the distortion I've increasingly experienced.

For most of my life I had better than "perfect" vision (the standard is 20/20 and mine was 20/10, i.e. I could read two lines smaller than most on vision-test charts; my visual acuity was 50% better than "normal") and I could see clearly at every distance.  In my late twenties I got some very weak reading glasses because I was spending a lot of time reading text books at university and had started computing.  Three years ago I had an eye test, paid for new glasses and they were awful.  I was told to go away and my brain would adjust to the unclear vision they gave me because that was the best I could get.  (In retrospect I should have told them what to do with their glasses, but they'd lost my previous replaced lens and I couldn't get the old set back.)  When I had another test late last year, that wrong prescription was apparently still judged to be the best I could achieve and there was no further correction available.  The optometrist said she could see striations across my lenses, which would have been the puckering Nick described.

After Nick had finished with me, I waited to see his boss for his decision on whether doing cataract surgery would be beneficial.  Removing and replacing my unhealthy lenses with artificial ones would be a one-off procedure which I will require at some point and if I wait for the public system to consider my loss of vision bad enough for it to assist, I could be putting up with the problem for several more years.  Already I am finding it depressing and debilitating.  It will cost half the money we've been saving for the cattle yards, but at least I'll be able to see them clearly whenever we get around to building them.

I was offered an appointment in ten days but said I'd have to go away and check whether that would be possible for me - another trip to Auckland and so on.  And this was all very sudden!

Stephan had by then been dropped off to join me and we went around to Nick and Georgina's place for dinner and to meet their three-year-old son, Thomas.  Time has obviously flown when you don't meet someone until they're three.

Then we drove home, arriving at midnight.  William had kindly come early in the evening to get the calves in and separate them from the cows, so we didn't need to go out and wake them up.

First thing this morning I phoned and booked the surgery, booked a flight to Auckland, a taxi from the airport, a hotel to stay in afterwards and the bank to find out how to access savings which are tucked out of reach.  No time is going to be particularly convenient for this process, but this isn't a bad time of year to do it.  Since I'm paying, I can avoid waiting, so may as well do it as soon as possible. 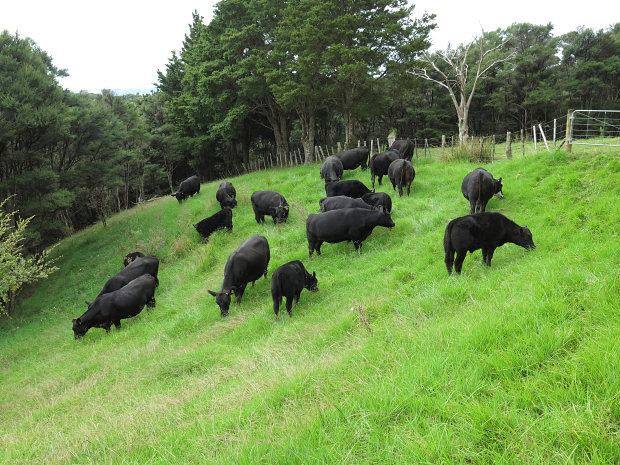 The cows all came up to the top of the PW, following my calls, and I let them through into the Middle Back.  Poor, hungry creatures: not!

Walking back along Route 356 at the bottom of the PW, I startled a Quail and about a dozen chicks, none of which I was able to photograph because they were so small and quick and disappeared in six different directions into the undergrowth. 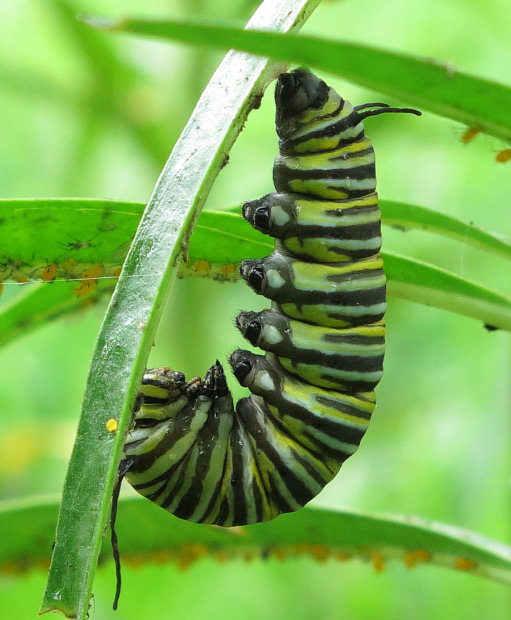 A pupating Monarch caterpillar, already darkened from its "live" bright markings.  As soon as one attaches itself like this and begins to pupate inside the caterpillar skin, the skin changes colour.

They attach by their tail end, the true legs and head hanging down. 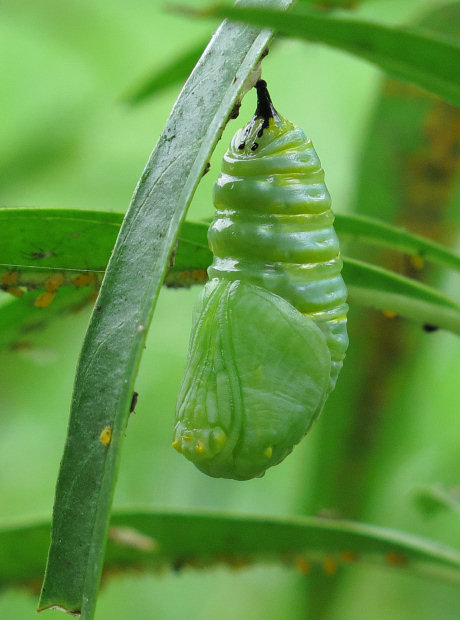 This chrysalis was still moving as the creature completed its process after the caterpillar skin had dropped away.  The finished chrysalis is smooth and shiny with pretty gold spots.

Here the wings will develop in those flaps and the face with antennae and tongues appear on the left, between the wings.  (I subsequently watched an entire emergence and saw where they were laying along the body and those markings match those positions.) 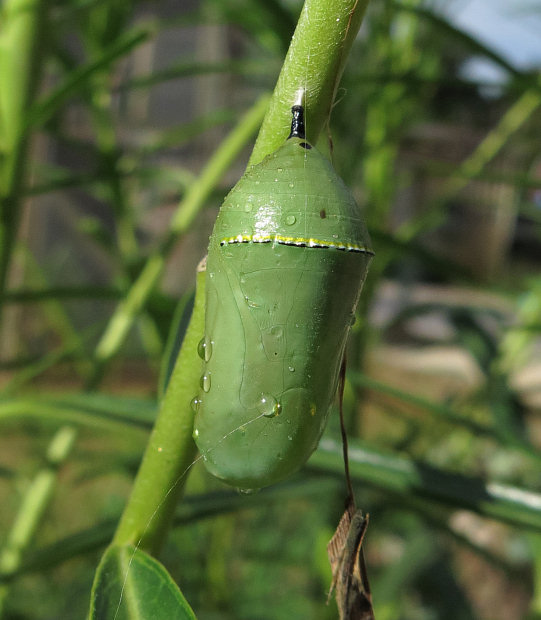 Here is one all nice and smooth and finished (after a shower of rain). 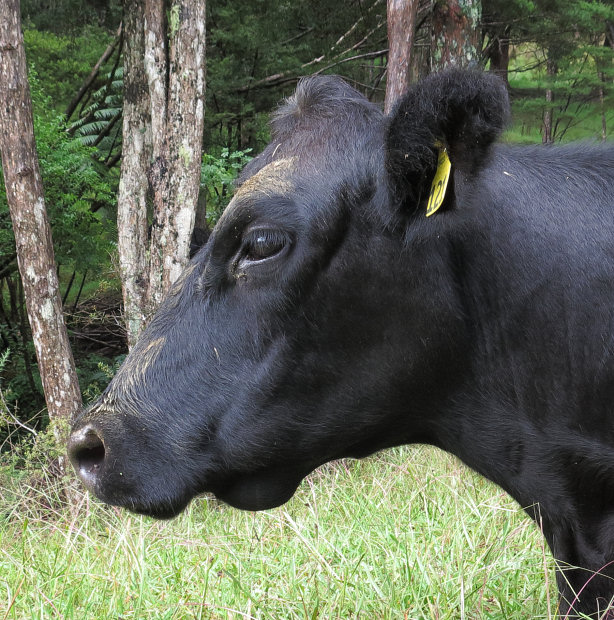 I found Dexie 121 sporting this strange lump under her jaw this morning.  She seemed in good general health, chewing her cud, looking quite relaxed and moving normally when up - and she wasn't the last up the hill when I called them to the gate, so can't have been suffering anything too serious.  When I checked again the following day, she looked entirely normal again.  Weird. 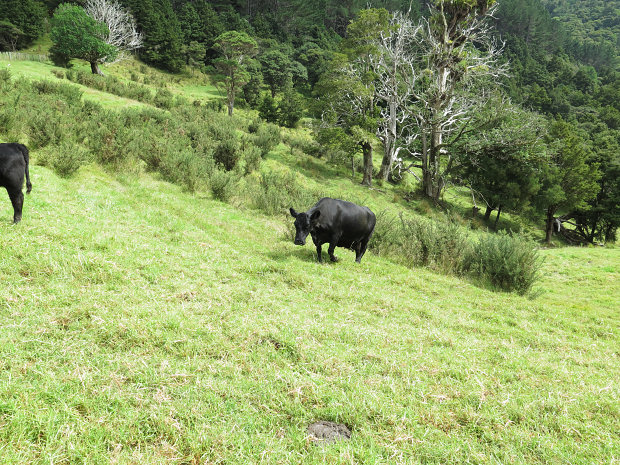 Demelza was last up the hill, as usual.  But it is really hard to tell with her if this is because of her age or just her usual pace.  She's nearly always last, whatever we're doing.  Her daughters are all much the same.

Look at all that gorse! 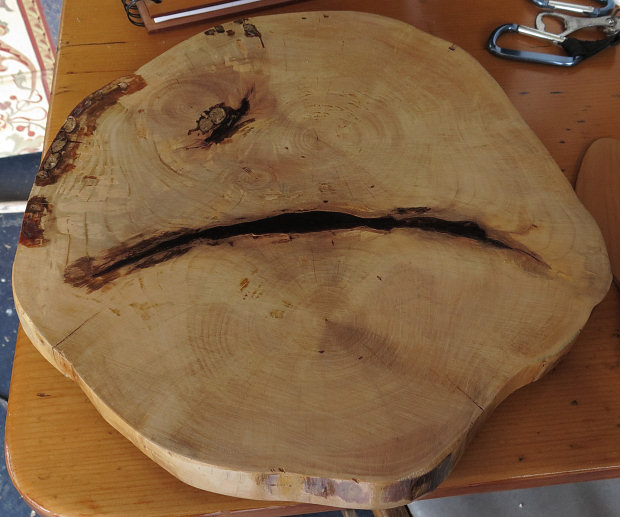 Simon (nephew) and Anna are getting married in a couple of weeks and Sarah, who's doing the wedding cake, asked Stephan to make a nice cake board.  This is a slice of Totara, with clever little turned feet underneath to make it easy to pick up from a flat surface. 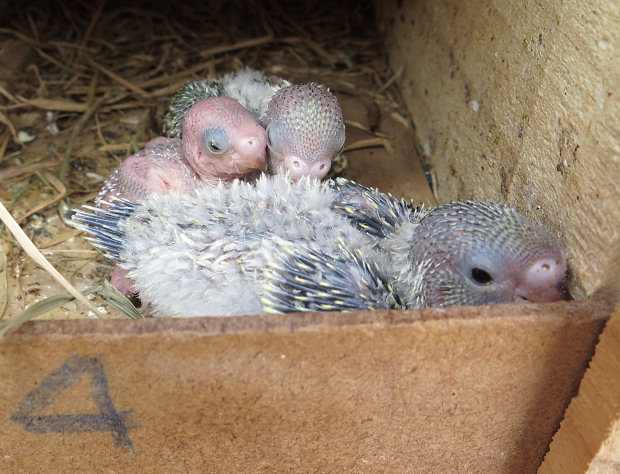 More babies.  Their dad is yellow and their mother is green and yellow.

I sold a couple of their younger siblings yesterday, to Lesley, who hand-rears tiny birds so they're tame.  She has been coming to collect a few chicks every few weeks.  I get to see what colours they turn out, so I'm happy and their parents have less work to do in raising so many.

Wayne, who reads this site, last month very kindly sent me his spare copy of a Budgerigar breeding book with illustrations of many of the colour variations in these birds, along with breeding tables showing the colours one might expect from various mating combinations.  I have not yet been a good student and digested its contents but fully intend doing so before too long.  I would like to understand the particular colour mutations of my little flock and with several chicks to study as well, can now tell more about their parents than by looking only at the adult birds. 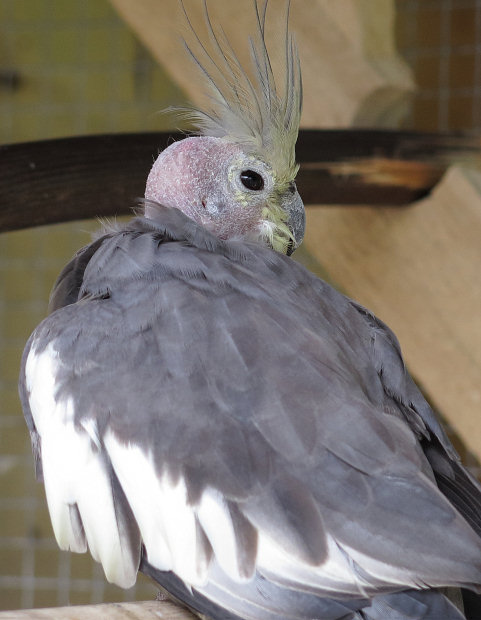 Ms Baldie Cockatiel looks a bit miserable.  I suspect she gets cold without her head feathers.  I am assuming the birds are basically in good health because they're active and appear to be in the same state they were last year when I first saw them in their previous aviary.  I'll feel more confident if this bird starts growing some head covering!

In their previous home they seemed to spend a lot of time sitting around in the darkish sheltered end of a small aviary, with a great number of budgies.  They looked pretty unhappy.  They seem a bit brighter here and are becoming less startled by my movements near them in the flights, although they do tend to flap off in a panic and upset everyone else if I forget to move slowly.

I sent this one's partner off to a new home yesterday, to live with a lonely female, where I hope he'll be happy.  I hope this bird and Murphy might be happy together, eventually.  It was possible her partner might have stopped over-grooming her in a new environment, but this separation will ensure it. 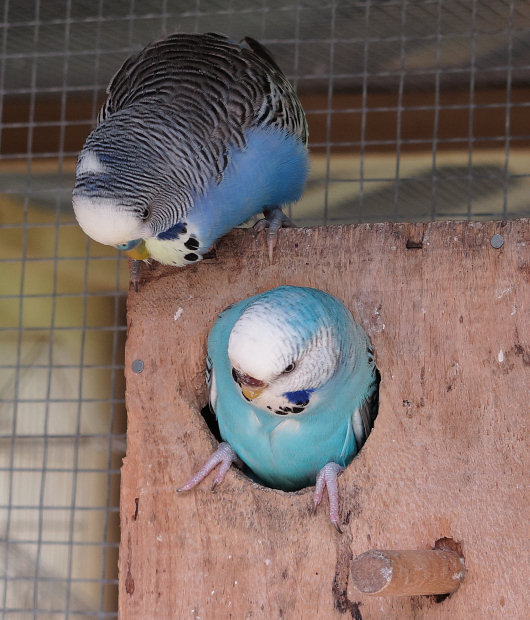 As for these two: eldest Loofah daughter is laying eggs in this box in between regular matings with her amorous brother.

I don't want her rearing chicks this season, since she's barely six months old, so have pricked tiny holes in both ends of each egg, to let them dry out under her.  (If I take the eggs away, she'll just keep laying more, which will deplete her resources.)

I'll have to remove both to separate breeding cages with other partners next spring, to stop them continuing this inappropriate relationship!

In retrospect, I'm not sure why I didn't just remove this nesting box.