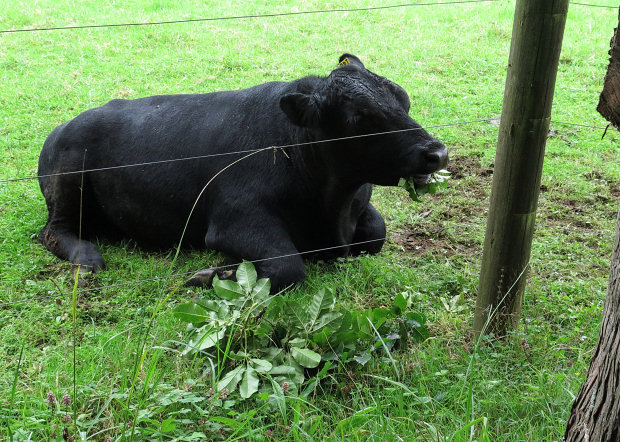 Five bulls were sitting in the sun down at the bottom end of the Windmill Paddock this morning, near the weaned cows.  I found the sixth at the other end of the paddock, standing oddly still.  This is 140, the one bull I didn't use for breeding and he has an injured front right leg.  I don't think it's his foot, so have concluded he's been bumped during a fight.  He can't bear weight on it and he is very disinclined to move far.  At least he can sit down.

I picked him an armful of Puriri leaves and very slowly and quietly approached him from behind the big tree at the right, so I could place them within his reach without startling him so he'd want to get up and move away from me.

It's hard to know what to do in such a situation.  There was no way to tell how bad his injury was, so I decided the best thing was to leave him quietly where he was, provide grass and water, and see how he is tomorrow. 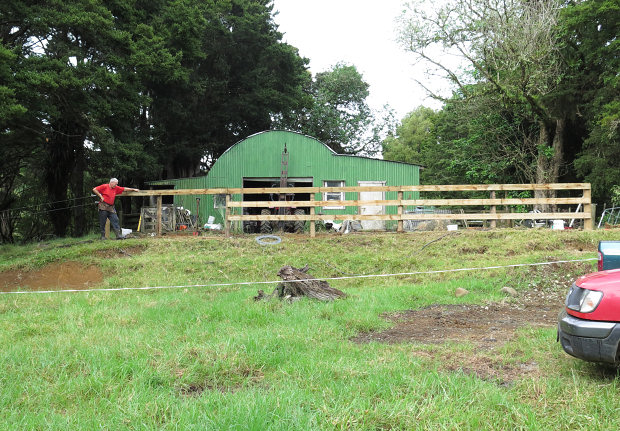 We're quite pleased with the look of this new bit of railing.  It's nice to tidy things up.

Lois brought Ella up this evening for a week of her school holidays.  We haven't seen her since July last year.  I took Lois and Ella for a walk out to check on the bull. 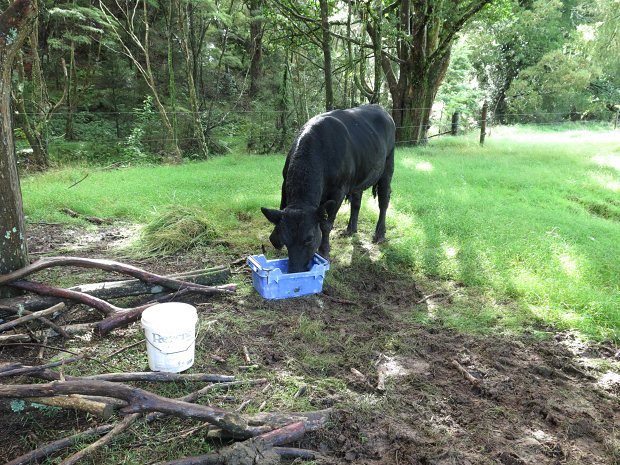 Bull 140, moving around a bit, now down under the trees out of the rain and grazing whatever grass he could reach.  I'm hoping he's just suffering an inflamed nerve or something and that he'll start to show some improvement.  I think it's too far to walk him in to the yards to get the vet to him at this stage, since he's still not putting any weight on his injured leg. 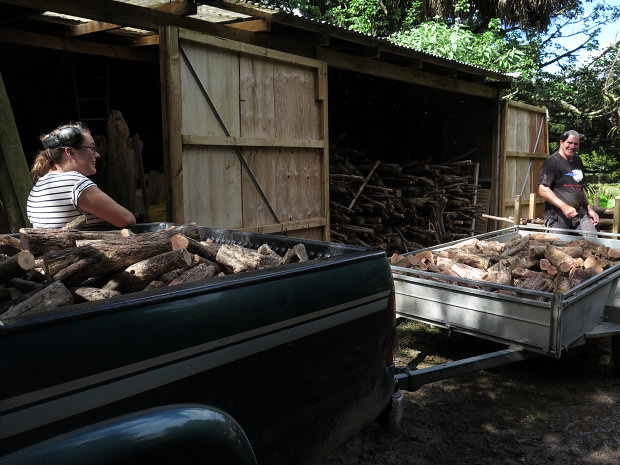 Ella and Stephan, cutting and loading firewood to take to some friends, one of whom is "not well, you know".  We spent a couple of hours there, the last time we'd see him.  Life, it's a funny thing. 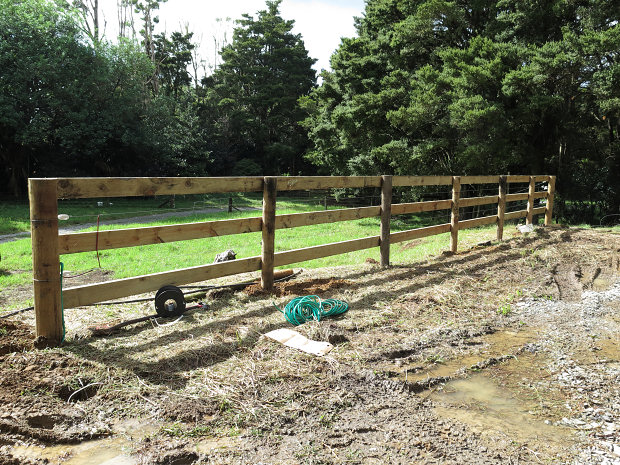 The electric fence feed is by both wires, linked at both ends, as we're learning is a better system than having it come via a single wire.  Stephan keeps learning new ways of doing things he's been doing for years, which he's finding fascinating. 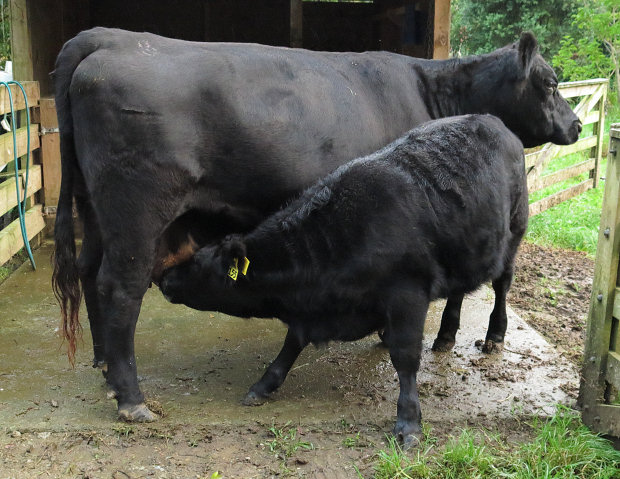 Imagen and her daughter having their last feed together: it's weaning time. 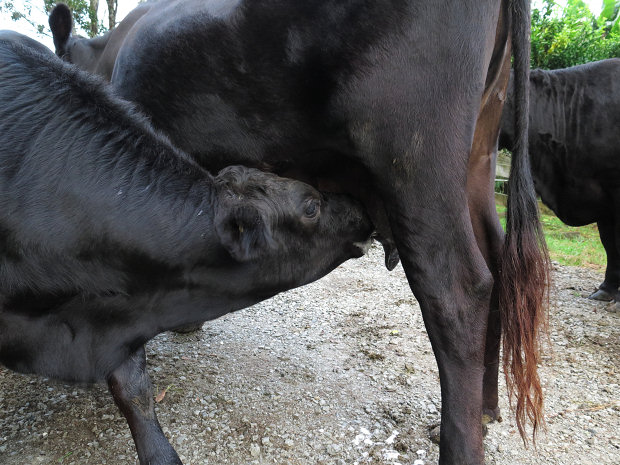 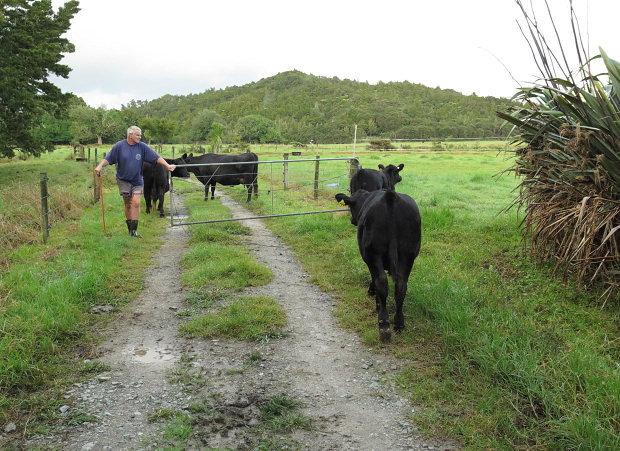 We pushed Imagen and Zella along the lane, then the calves into the House Paddock with the other weaned calves. 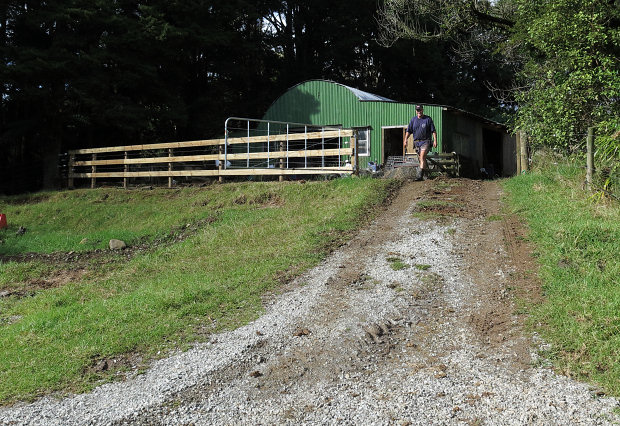 The rail fence is now completed with a well-hung gate. 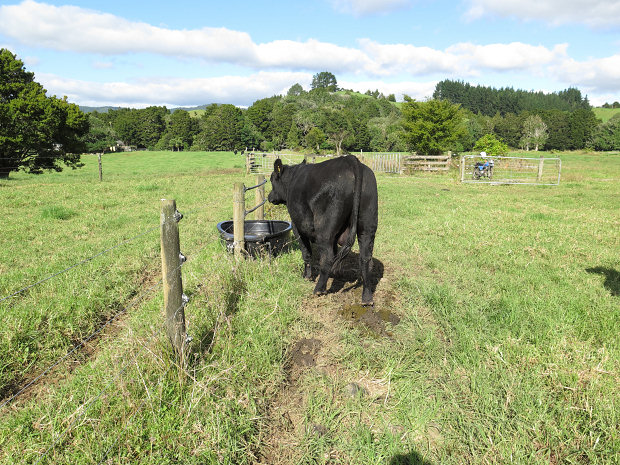 140 didn't look any better this morning, so I phoned the vet and asked if he could come out and advise us.  I need to know whether or not we should shoot the poor thing or if it is likely he will recover in time.

We drove out to look at him and he was rather more active than he has been.  The vet wasn't keen to make a diagnosis without a hands-on examination and I wasn't keen to try and confine him behind a gate or in some similar make-shift fashion, for fear someone could be hurt.  So we began to walk (hop/hobble) him in toward the front of the farm.

While Stephan quietly walked along behind him, taking it very slowly down the lane, the vet and I went back to the yards so he could pregnancy test the seven yearling heifers, which I'd yarded earlier. 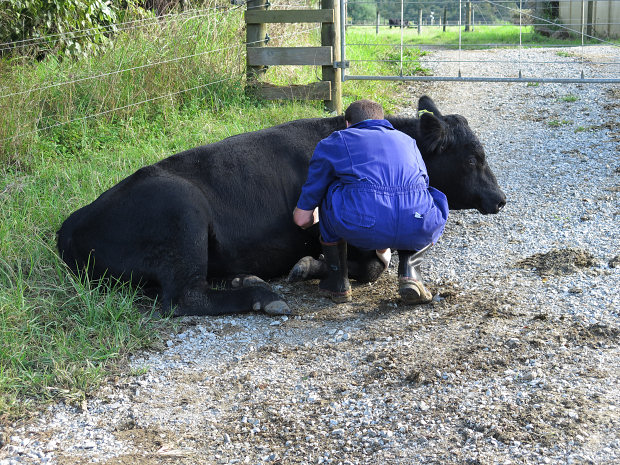 Then back out to see how Stephan was getting on.  The bull came through the gate at the end of the lane and collapsed for an exhausted rest, looking very much like he wouldn't bother moving any more, no matter what happened next.

That gave Mr Vet a chance to have a good feel of his shoulder, which was where he'd decided the problem was, and diagnose that something was nastily broken within.  There was no hope of recovery and so Stephan shot the bull. 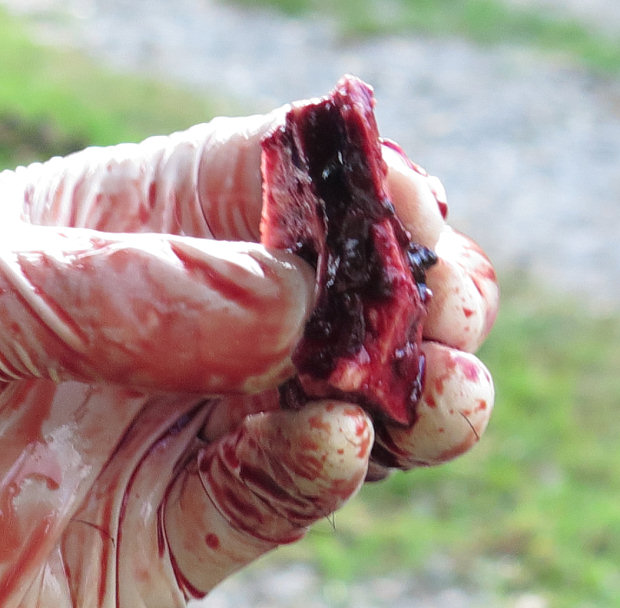 Then we cut the shoulder open to see what had happened.  This bit of the humerus was loose amongst the smashed remains of the rest of that bone.  Shooting the animal was indeed the right call.

I presume 140 was bashed really hard by one of the other bulls.  The vet also said they've been seeing a lot of spontaneous shoulder fractures in dairy heifers this year due to copper deficiency.  That possibility is something I need to investigate through my treatment records. 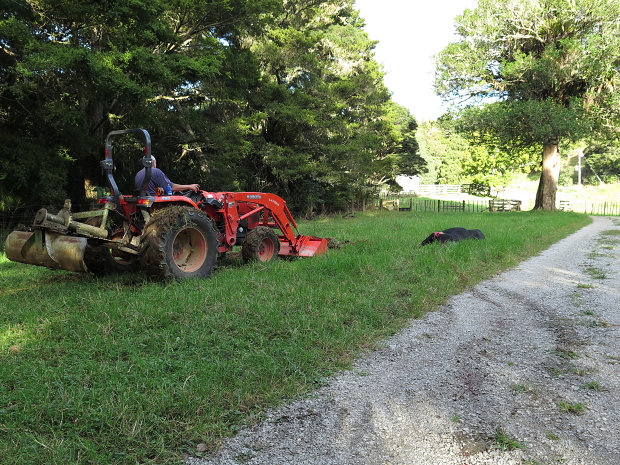 And so Stephan dug another hole, on the north side of 719's grave beside the driveway, since that's the nearest root-free ground.

This has been a horribly sad and distressing day.

I was present at this animal's conception, at his birth and have seen him on most days since; he would have gone off to the works in a month or two but that would have been a planned and much less painful end to his short life.

Ella was around at all times, I think, keeping sensibly out of the way when necessary.  She seemed to have taken it all in her stride, probably opting to be away out of sight when things were at their most unhappy point.

I eventually remembered that I'd left the heifers standing in the yards and let them out into the Pig paddock for the rest of the day.  The pregnancy test results were about as bad as I'd feared: only five of the seven I ran with the bull are in calf.  I have a very nasty suspicion there was a real copper problem last year but have yet to do my note-searching to confirm what part I directly played in that.  We put Molybdenum in with last year's fertilizer, which could well have exacerbated the problem we already have of the secondary deficiency caused by high levels of iron in the pastures. 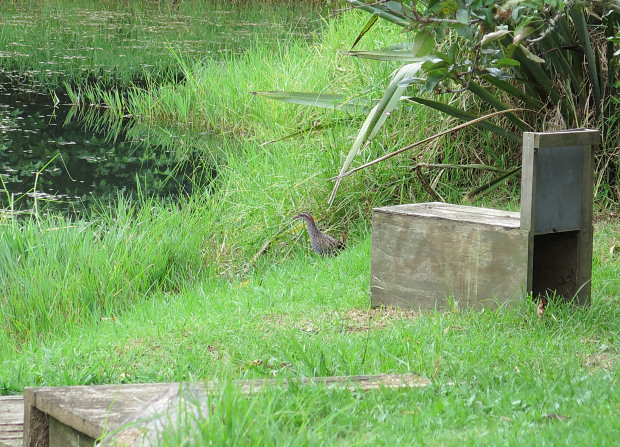 There was a funny noise down by the pond, sounding like a Pukeko protesting about something, so I ran down to have a look and startled this bird.  I have never seen one like it before and it looked to me a little like pictures I've seen of Weka.  I ran back to the house to grab my camera and fortunately the bird had not yet left.  It wasn't terribly frightened of my presence and eventually launched itself to fly the short distance over to the island, where the grass is long and I could no longer see it. 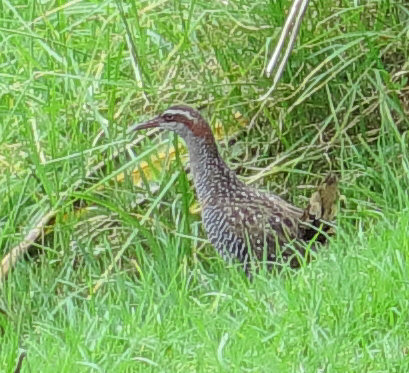 I am very glad I got a picture, so I could then compare it with the birds I looked up on-line, rather than relying on memory alone, soon discovering it was a Banded Rail.

All the information about this bird says it is no longer found inland, living primarily in coastal wetlands and areas of Mangroves, so I emailed the contact address at NZ Birds Online and sent them the picture.  Someone from the local Ornithological Society later contacted me for further details.  Hopefully the sighting of one might indicate the presence of more of them in the vicinity. 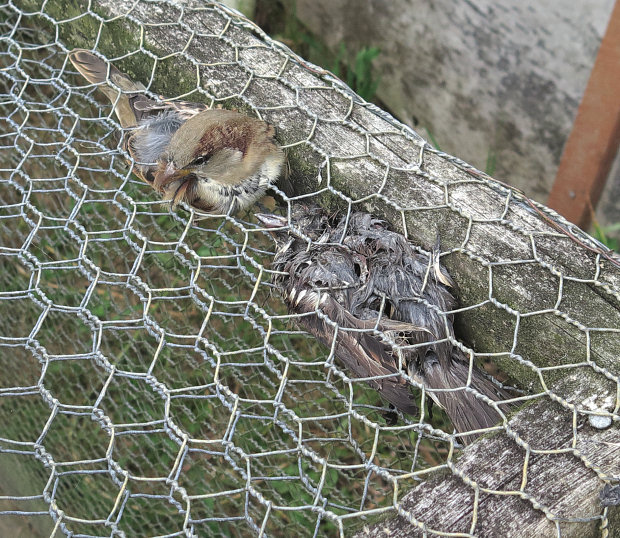 As I passed the young hens' pen, an unexpected flapping drew my attention to this poor sparrow, trapped and, had I not seen it, it would soon have joined its dead friend in being stuck here forever.  The sparrows get in to the cage through a gap somewhere and then try to fly back out the top, where there's a double layer of netting, which is obviously a death trap for some.  I pulled the layers apart and this bird and another were able to escape into the cage again and then out the open door.

I have been writing, slightly after the deadline, my 100th column for NZ Lifestyle Block Magazine.  It's publication will coincide with the fifteenth birthday of the website in July, which I thought was rather nice timing.  One hundred columns seems rather an achievement for someone who has always struggled with meeting deadlines (and missed one again in this case) but thanks to Nadene's generosity, I've still not been fired and I have improved my timeliness, markedly.

We spent the morning in town at a Farm Safety Workshop.  The Health and Safety in Employment Act 1992 has just been superseded by the Health and Safety at Work Act 2015 and there a number of new requirements about which farmers in particular are concerned.  I thought we'd better go and find out what the real story is.  It was a good presentation with useful templates provided for our later use to help us set in place our own systems to ensure we stay within the requirements of the law.  Most of its intent is to make sure people are not endangered while they're working but it has the capacity to be quite punishing if employers, in particular, do not take appropriate care of their employees.

On our way home we called in to the Switzer Retirement Home to talk with manager and friend, Jackie, about her ideas for an aviary of birds to amuse the residents.  The idea has been reduced since we first talked, but she'd still like a cage with some birds within one of the social areas.  We'll have to come up with a cage design and some birds. 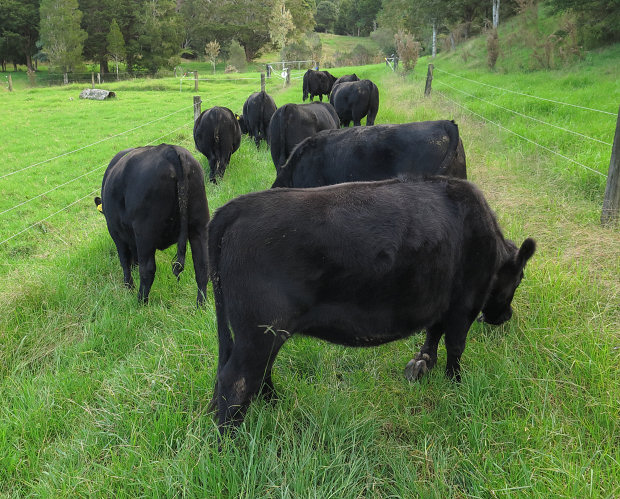 At home again I moved the heifers from the Pig Paddock out to the Big Back North.

My quietest heifer, 773 (she of the warty nose) is not in calf and nor is Pearl 779, Meg's lovely daughter.  The other five who were with the bull are 12-14 weeks pregnant, according to the vet. 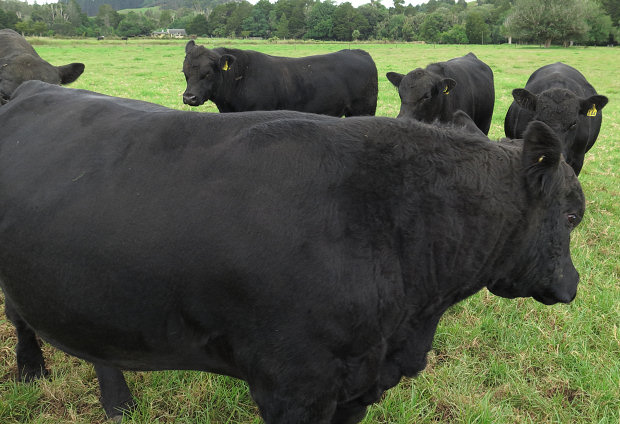 One of these bulls is guilty of a grievous assault but nobody's talking. 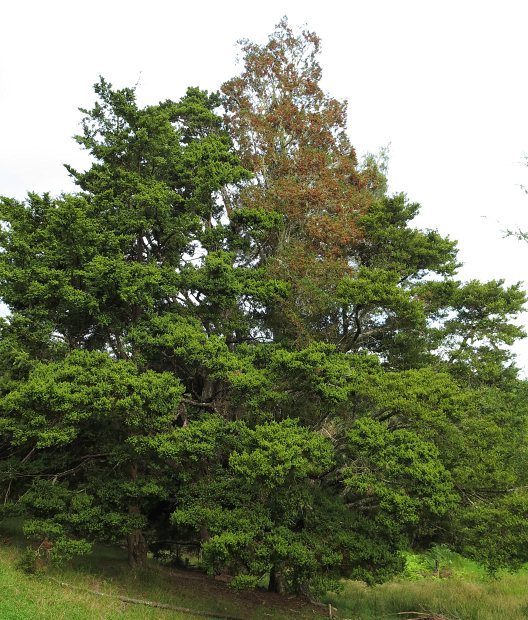 I love Kahikatea berry time.  It's stunning to see the trees completely change colour for a while. 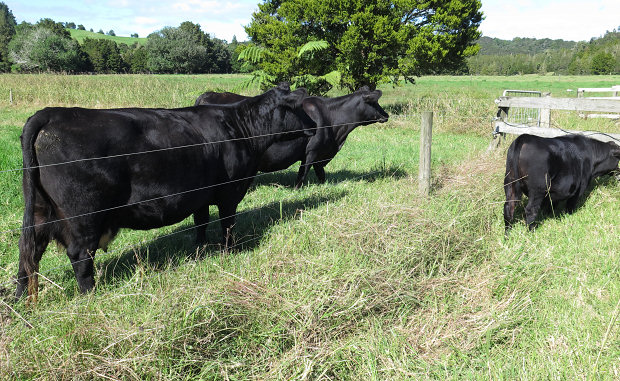 I moved the eleven weaned calves from the House Paddock, along to join the others in the Mushroom today; Imagen and Zella were very alert to the departure of their calves.

We had to pop over to Kerikeri again this afternoon and while I was busy, Stephan took Ella to The Parrot Place which they both really enjoyed.  I'm the "relationship manager", helping Stephan do his Dad job well, and that seemed likely to be a fun place for them to go and spend some time together. 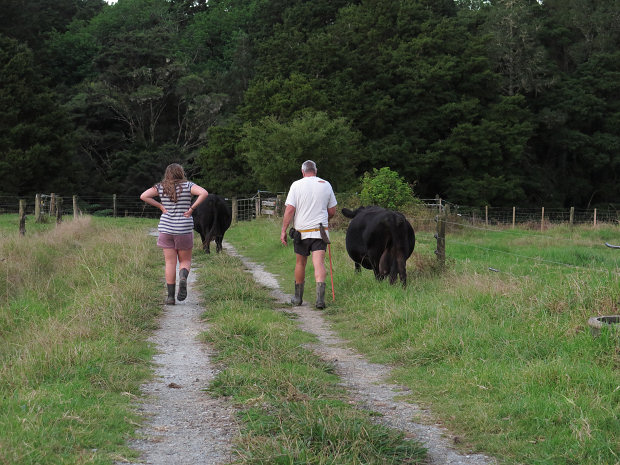 Ella and Stephan, walking Imagen and Zella down to be milked in the evening - they're being done twice a day now that their calves are not with them.

Before dark I separated the last group of cows and calves, the calves completing the set of 36 in Mushroom 1, 2 & 3.  The cows have access to both 5d and the top end of the Windmill Paddock, so they can be close to their calves when they want to be and also have enough food to keep them comfortable.  Another noisy night. 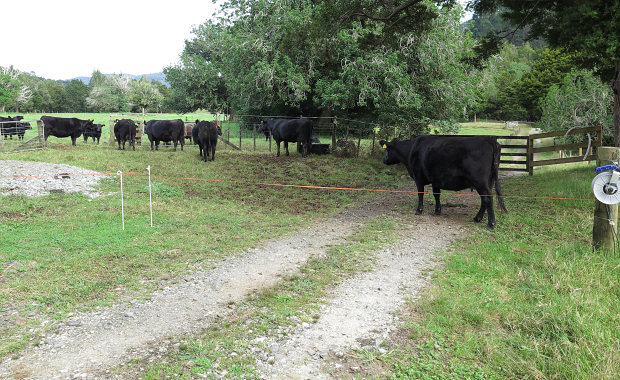 Weaning is very stressful but the pain of it does ease quite quickly.  I need to arrange the sales of the calves once they're weaned and I like to have weaned them for a few days before they go off on a truck. 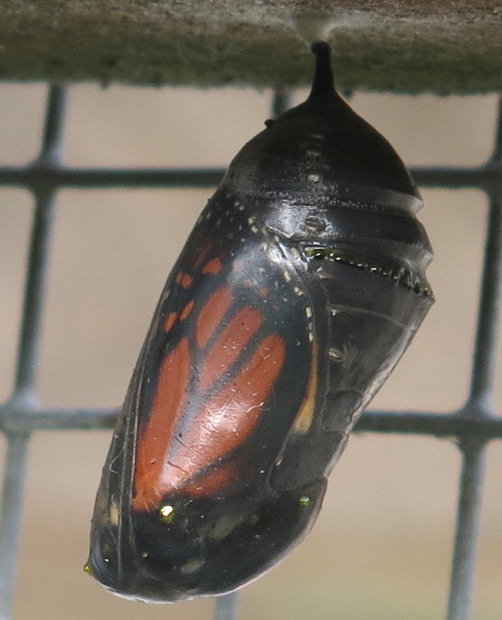 This afternoon I noticed that this chrysalis appeared to have air inside its skin, indicating imminent emergence, so I set up the camera tripod and started recording some video.  I had to go out and check every few minutes because there wasn't enough space on my memory card to record for more than about nine minutes, so deleted the first couple of files when nothing much had happened.  When I went out to check on the third occasion, the butterfly was out and its emergence was nicely recorded.  I've never seen one hatch before. 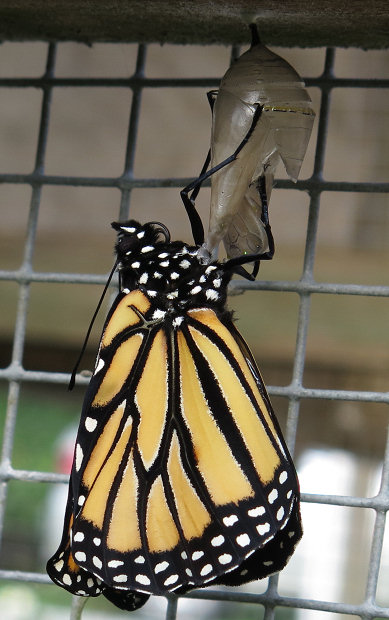 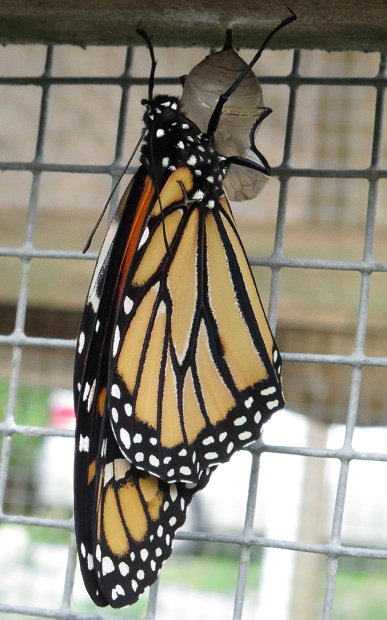 The body of the butterfly is fat and heavy-looking when first out and while some drops of fluid are expelled, presumably most of it goes into expanding the beautiful wings during the hour or so that process takes after hatching.