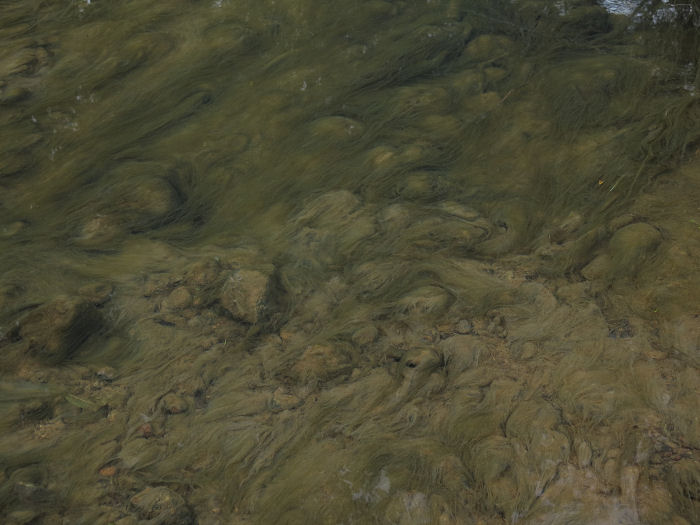 This prettily flowing-in-the-current algae appears at this time of year and is less obvious when the water is warmer. 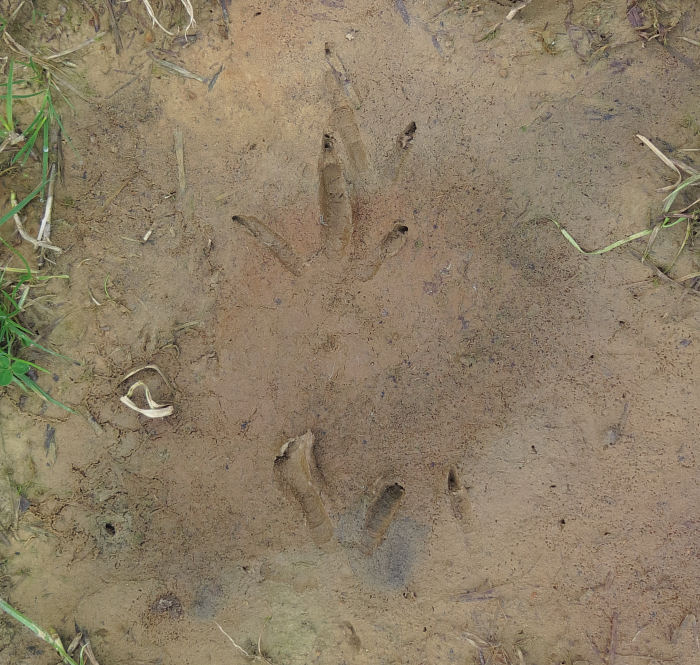 I still think these are Kiwi prints but maybe they're just a lot of pheasants' feet.  Except pheasants have quite dainty feet and Kiwi have big, strong, thick toes which would leave this sort of mark.  I walked up the Big Back North hill today and found prints all over the place. 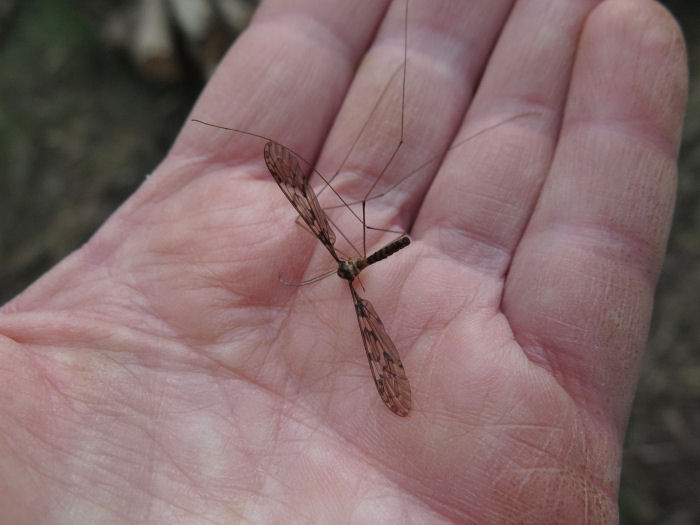 After checking the cows in the Middle Back, all sitting down the bottom in the sunshine, I climbed back up the hill and, unusually, spotted a female Tomtit before I saw her mate.  It is usually the black male I see first, darting about catching insects.  I may have startled the female as I walked up, so she dropped this insect she'd flown to the ground to pick up. 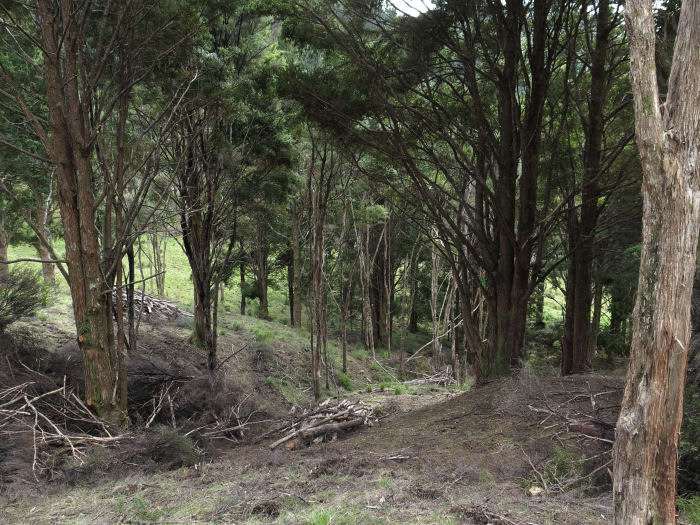 Tomtits perch on branches and often on the vertical trunks of trees, watching the ground, to which they fly to catch their prey.  I sat here for a while watching the pair of them and listening to the variety of birdsong around me. 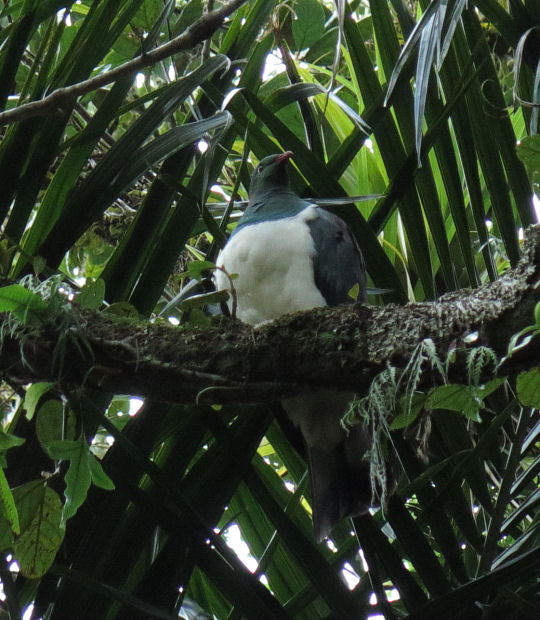 Then I went up into the PW reserve and noticed a couple of Kukupa sitting quietly in trees.  I'm familiar with their pigeon noise but there was a different sound, also identifiably pigeon but with a different inflection and I wondered if it were the noise made by a nesting female?  It stopped as I approached the trees in which I suspect they regularly nest here.  There are often family groups at the top of this hill and I've long suspected they do successfully raise chicks in the trees in the little reserve. 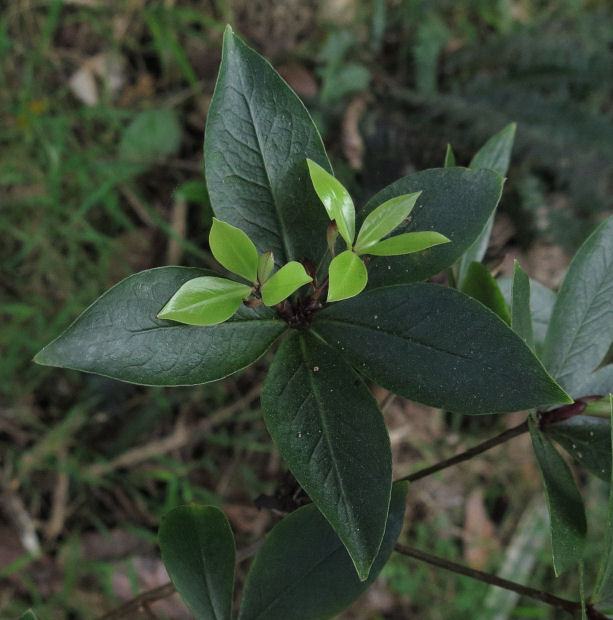 Here's the Pittosporum cornifolium, now with its new leaves unfurled.  I think it's such an attractive plant.  If this one survives and seeds, I will try and grow some closer to home.

I have found one other near-ground plant, around in the Bush Flat reserve.  It usually grows far too high up for seed collection. 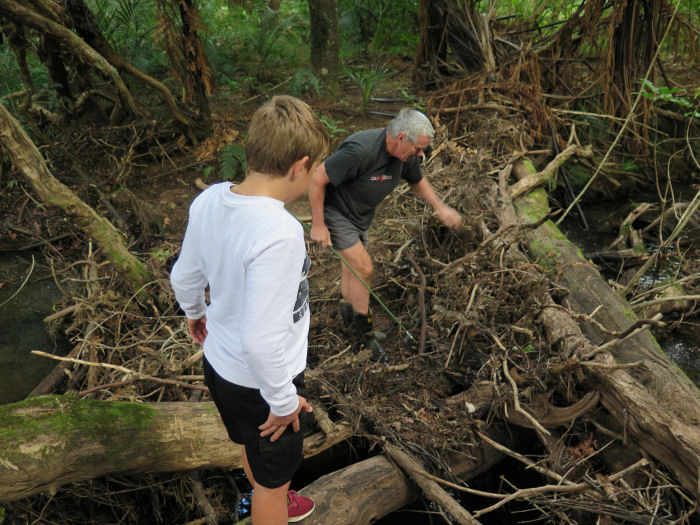 Jacob came over again today and this time we took him exploring in the bush reserve near home.

This dam has been building up with every flood and Stephan got stuck into deconstruction, pulling debris out of the pile and flinging it onto the bank (where it will doubtless be carried back in to the stream in another flood, but will at least move on and could travel all the way down to the sea without being caught up again).

Complete unblocking will require some chainsaw work and some serious pulling equipment to get the bulk of a fallen tree out of the stream; but that's a job for the warmer months. 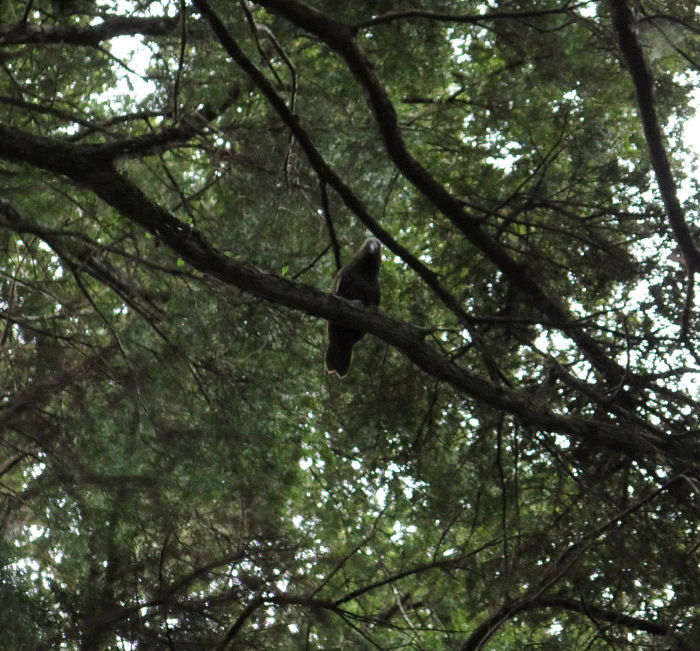 Above us the Kaka was warbling its loud, sometimes beautiful, sometimes merely raucous, calls.  Jacob says his family have seen three of them but we've only ever seen a single bird so I'm a little doubtful about that report. 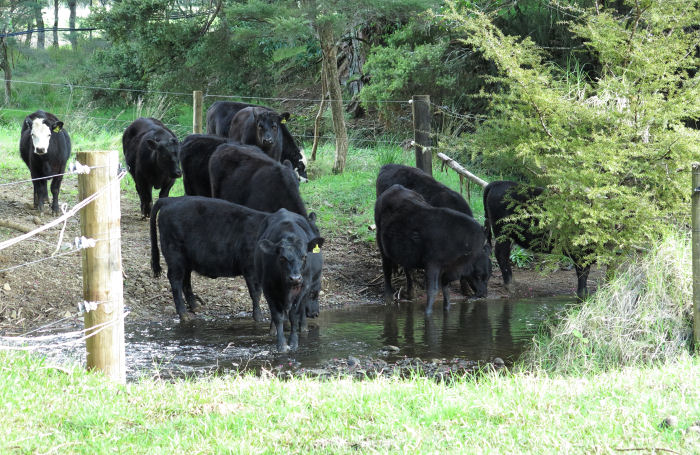 Jacob came again and this time we "did farming", moving the young cattle across the stream to the Tank paddock. 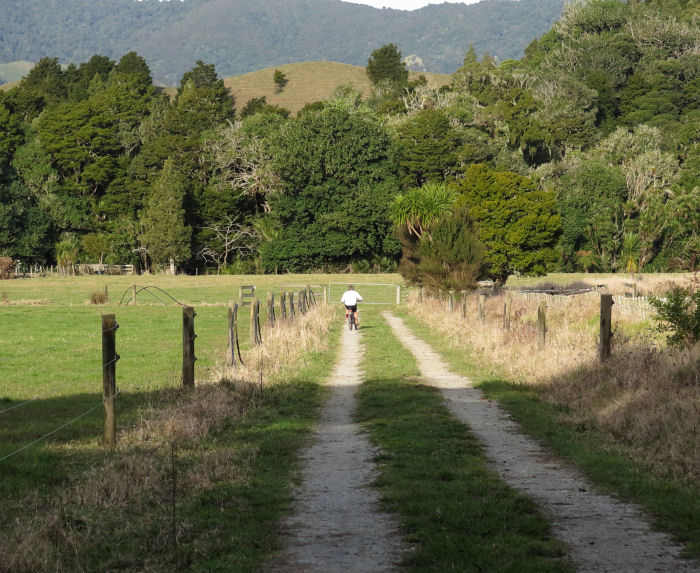 We rode out to do something together at the top of the flats and then had a race home.  Jacob was almost there by the time I'd started the motorbike and turned it around. 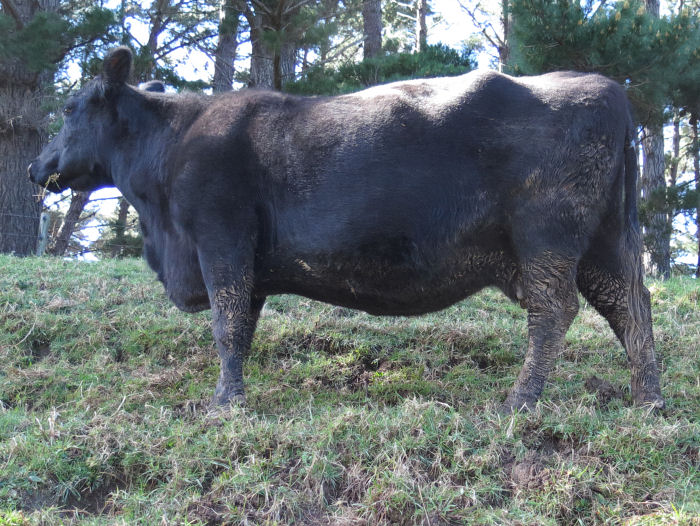 Having left the gate open between the Middle Back and the Big Back North, I went to make sure the cows had moved - turned out I should have done that yesterday.  Demelza was the only cow in the Big Back, the rest had been out and eaten the available grass, then returned to the warmth at the bottom of the Middle Back. 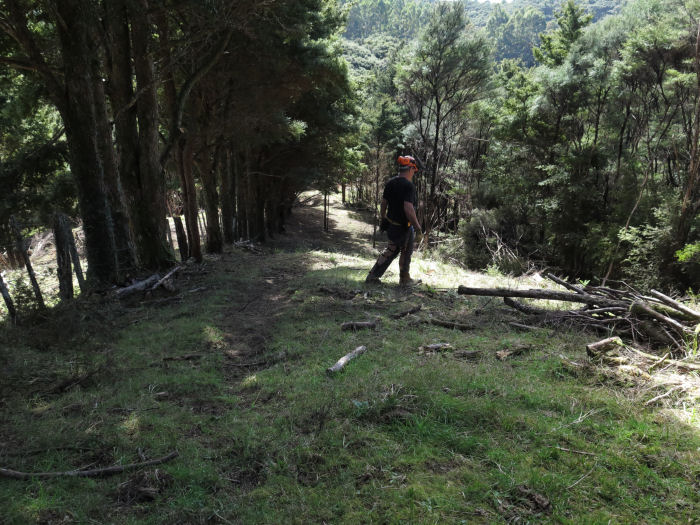 I went via the PW where Stephan was cutting scrub again and together we went down and pushed the cows up and out of the Middle Back, a frustrating job to try and do on one's own. 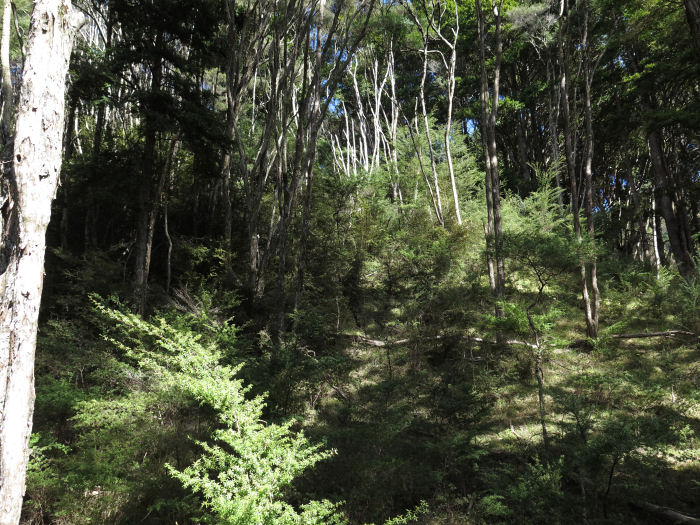 Then we went back to have a look at the possibilities for fencing the gullies which run down the slopes of the PW.  There are some large areas we'll have to fence off and some other places which will need some sort of access at the bottom of the slope to prevent cattle being stuck in corners and not quite working out how to get back to their herd-mates.

Some of it is pretty steep and even as a North-facing area, won't ever be much good for grass.  Working out how to subdivide the area will be something we decide as we go or after we've worked out what's left after the gullies are excluded.  Fencing the gullies is primarily about protecting water quality but secondarily about excluding the cattle from areas they can sometimes get into trouble and over time it is that second purpose which I will most enjoy on a daily management basis.  Our awareness of doing the right thing for the environment in which we farm is something that grows all the time with this sort of improvement, the background to everything we do. 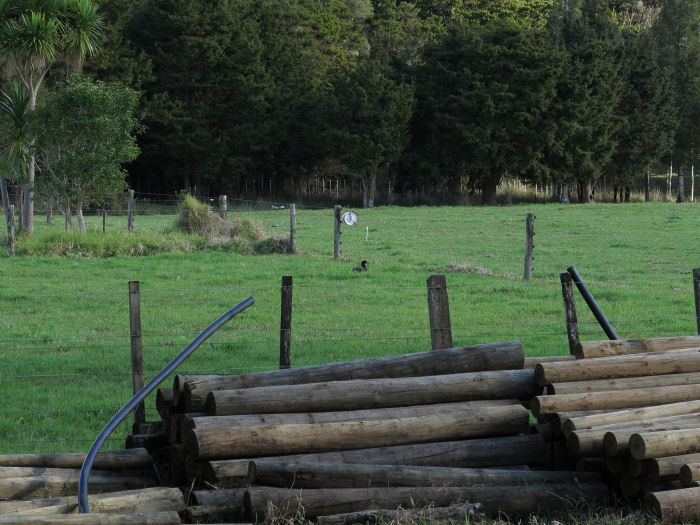 I keep seeing this male Putangitangi (Paradise Shelduck) sitting alone in Flat 5, waiting for his nesting partner, wherever she is. 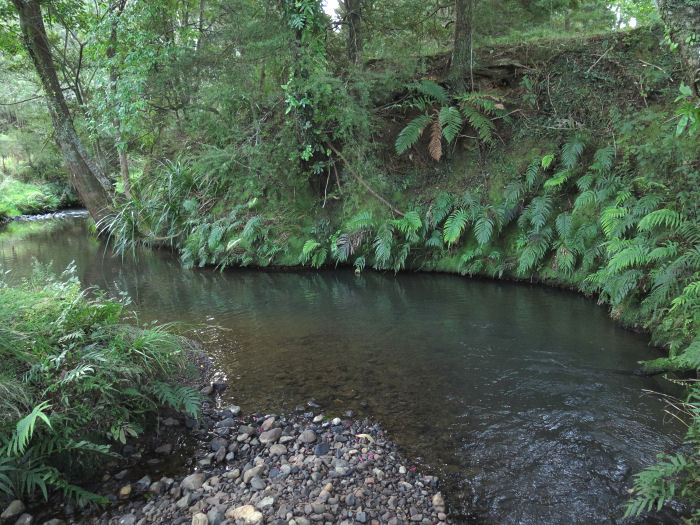 I went for a walk, for pure pleasure.  I enjoy exploring the stream margins where they've been recently fenced off and where new things have grown on every visit.

This is such a pretty place. 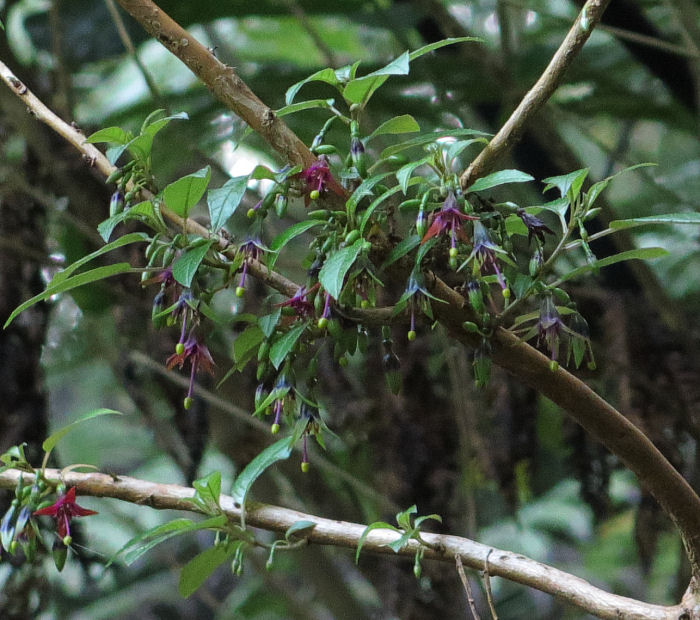 Remembering the Tree Fuchsia I'd previously noticed on the river bank, I walked along to inspect it, finding flowers, lots of them! 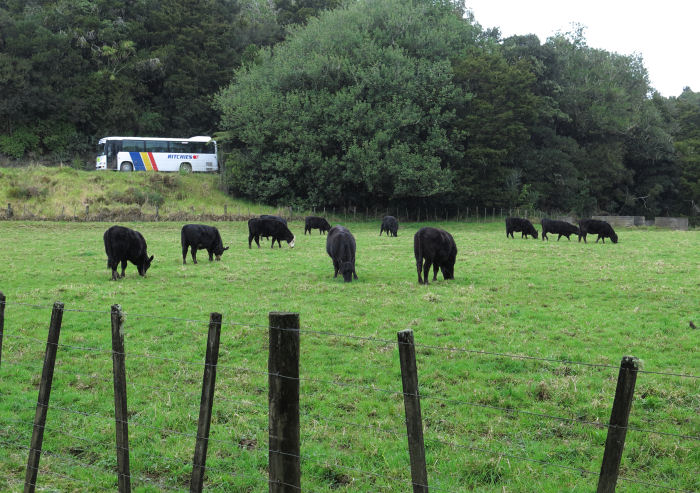 The yearling cattle now in the Pig Paddock and the school bus, coming back down the road just after four o'clock. 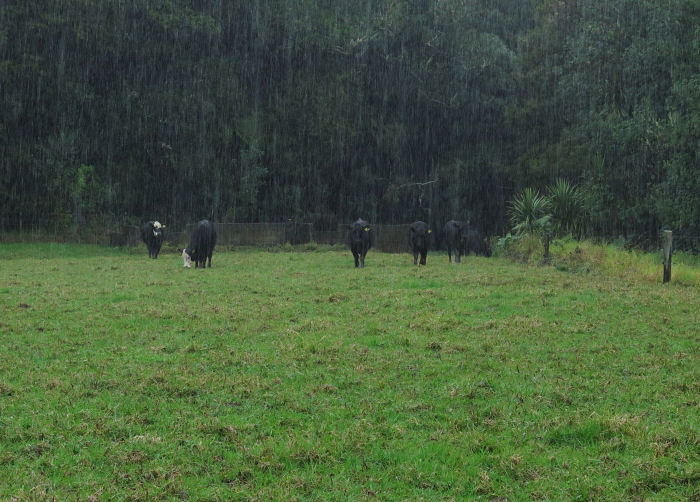 There was a MetService rain warning for this afternoon so when the rain did begin to fall quite heavily, I went out to call the yearlings out of the Pig Paddock.  If the stream came up too high, animals could get into trouble there, although I'd hope they'd have the sense to go and stand at the high end.  If there were an extraordinary amount of water, it might be hard for them to work out where to go to be safe and in such a flood, we'd not have a hope of doing anything to help them, being stuck on the other side of the stream. 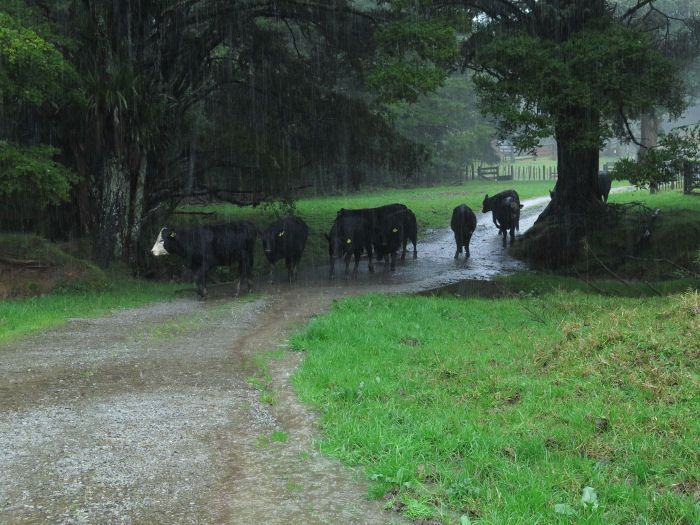 Out of the paddock and across the bridge to graze for a while near the house.

Stephan had also moved the sheep from their flood-prone area, although the three ewes are probably well flood-proofed now, having had to swim last time. 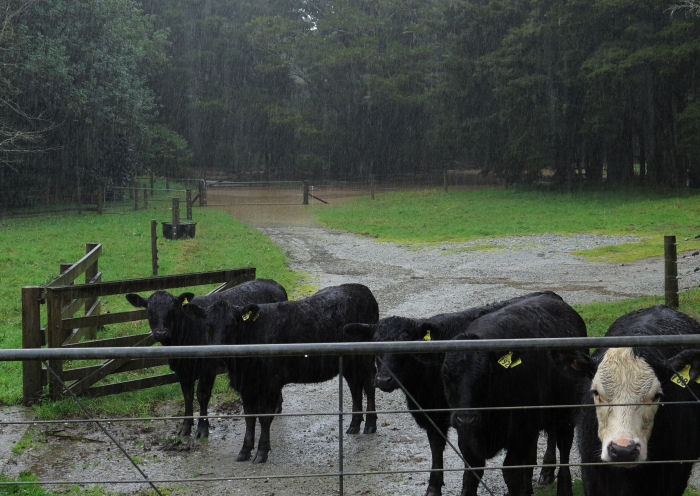 Within a couple of hours the stream was up and over the bridge. 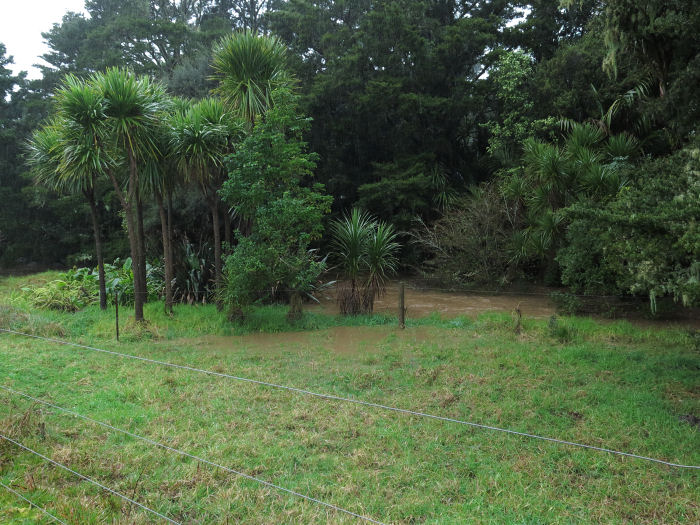 It is because of these floods that I planted all those trees on the stream bank and must plant more.  Those fourteen plants, all still alive and thriving, have held the bank together well for several years now, where otherwise it would have been eroded away. 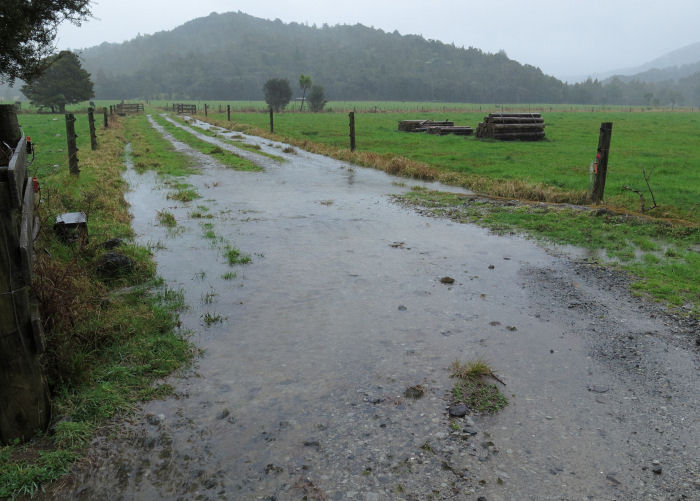 In really heavy rain the culverts can't cope with the amount of water flowing off the paddocks and this happens.

In the evening, while the rain was still falling audibly on the roof, I had a wonderfully hot bath out on the deck.  Bliss. 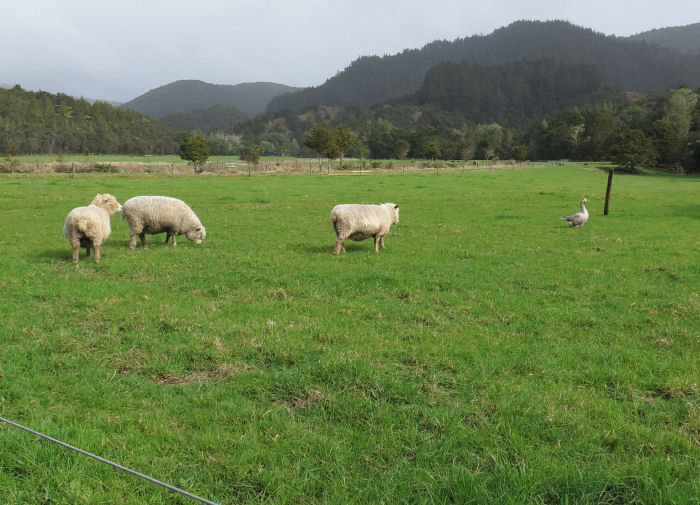 Here are the sheep (including the feathered one) back in the House Paddock, where they can graze for a while to give their usual area a break. 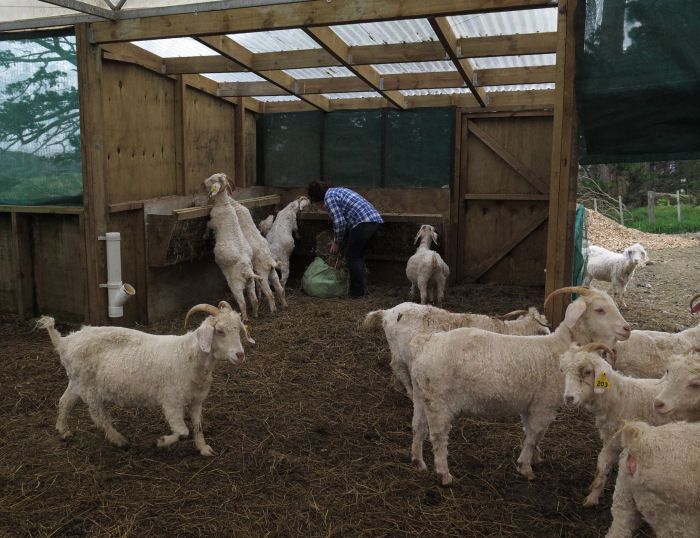 The animals all being safely provided for, we packed up the car and left home for a couple of days, driving two hours south to Helena Bay, south of the Bay of Islands and just north of Whangarei.  Kate and Geoff live there and while we've made a couple of short visits, the most memorable being the day of the Christchurch earthquake, we had never managed to take up their invitation to stay a night or two.

Geoff and Kate farm Angora goats for their fibre and the animals have all been recently shorn and the does very round bellies were all prominent, with their growing kids due in a month or so from now.

For a bit of extra entertainment, let us have a twins guessing competition too.  This year they both got in calf on the same day, Saturday 2nd January. 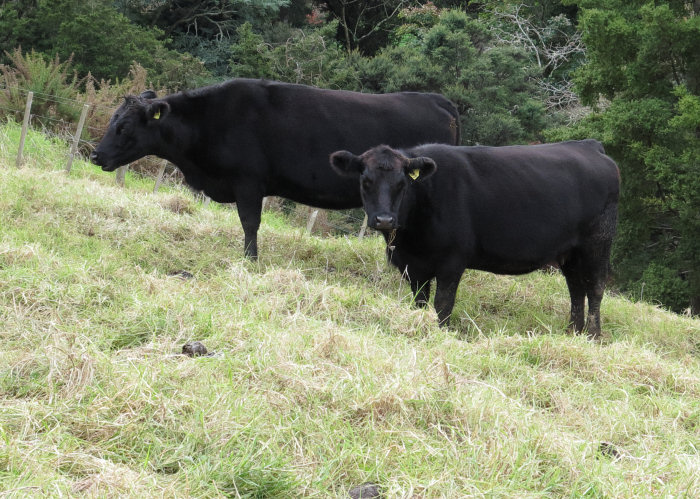