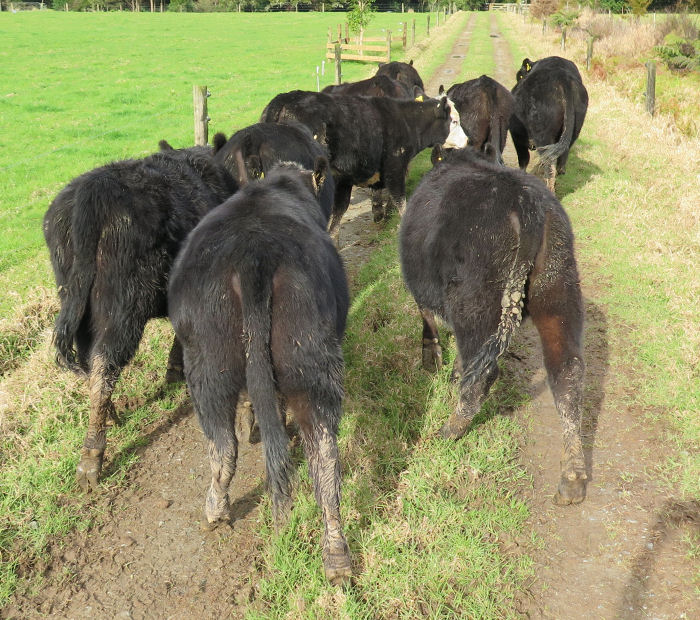 The youngest cattle are doing alright, not quite getting enough feed to grow as fast as they possibly could, but healthy enough.

I note the slight hollow curve of some of their thighs but am comforted by the fact that they're still filled out well around their tails.

Here they were on their way to the yards for their copper shot, their second this year, so they'll need at least one more before mating in the summer.  After several years of monitoring copper levels in the livers of culled cows (we send off a request form with the cows which go to the works), I concluded that four shots a year will keep the cows at an adequate level and I figure that those which aren't growing a calf can probably do well enough with three - although four could be a good idea for the youngsters as they go in to their first pregnant year. 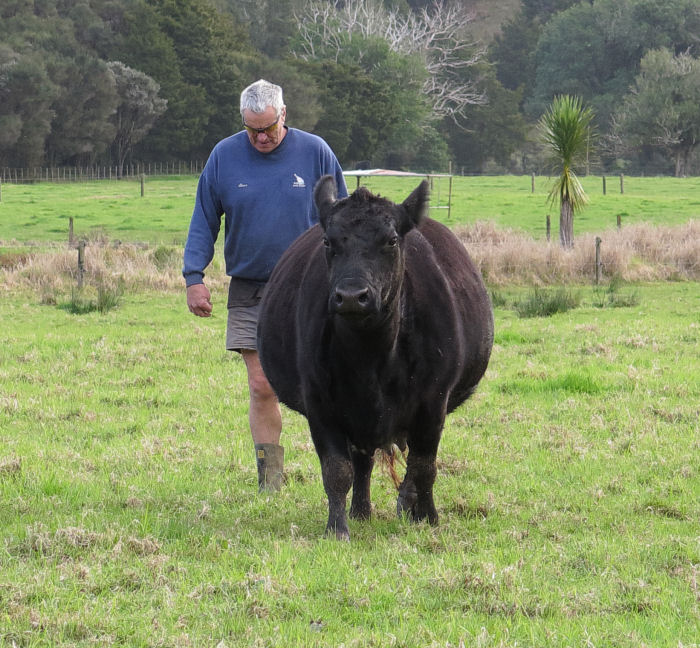 Imagen always looks slightly annoyed by life but it's just the setting of her eyes and the wrinkles (not so visible under a winter coat) on her face.

On young Jacob's second or third visit here, I introduced him to Imagen and Zella and told him about their famous sires.  Next time he came he asked when the bulls would be coming back for another visit.  I think I bought into a bit of trouble there!  One doesn't like to have to embark upon "birds and bees" discussions with other people's children without some indication of their present level of knowledge or understanding, especially when dealing with the complications of artificial insemination.  I usually resort to plainly factual answers, presented without fanfare, and they either go over the heads of my audience or satisfy their current curiosity.

Then we brought the cows back across the road and I weighed 11 of the 34 and gave them the new pour-on drench.  Most of the cows are in good condition so I did not drench them but anyone looking a bit stressed or thin got it. 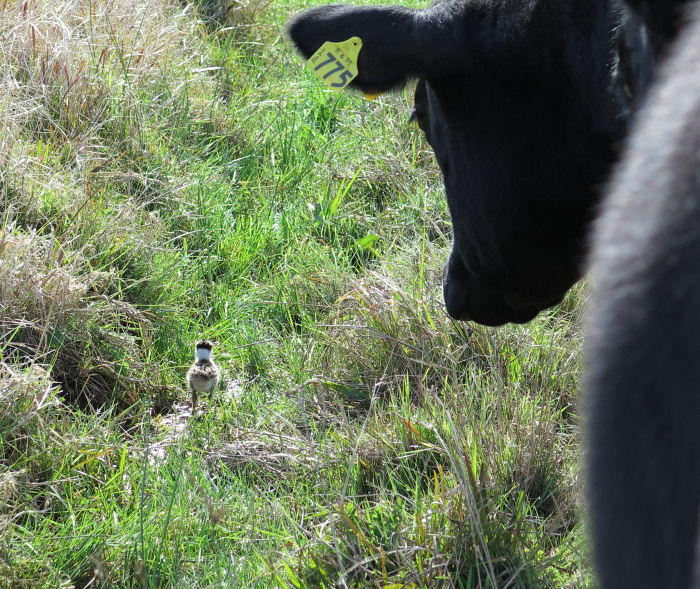 There was a light frost this morning.

Alan, a friend from just down the road, rang and I told him if he was quick he could go out with Stephan for some firewood cutting.  Alan likes the exercise and Stephan likes the help.

Meanwhile I brought the eleven pregnant heifers in to the yards.  Along the lane between Flat 1 and the Windmill, the Spur-winged Plovers were on the track and the tiny chicks didn't know which way to go to get out of the way of these huge black creatures.  The heifers curiously followed them along until the chicks worked out how to get up out of the drain and out onto the paddock again. 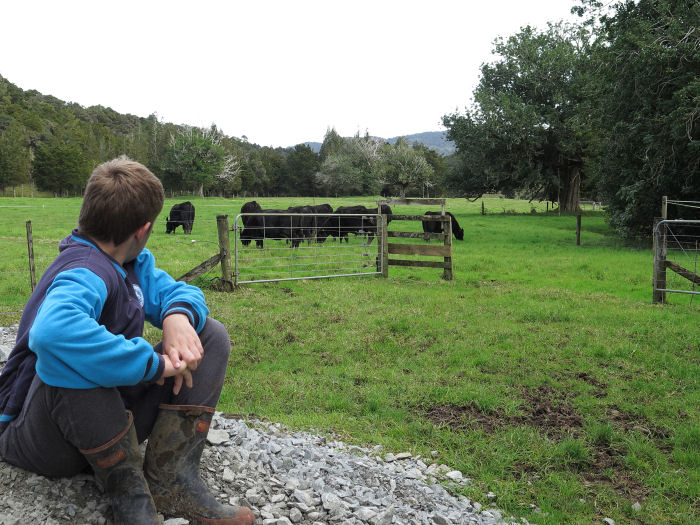 I ducked in to the house as I passed and the phone rang, a call from my now-regular weekend helper, Jacob, who asked if he could come over right now?  I met him at the yards and as I put the heifers up the race and each one's weight came up on the display, Jacob calculated how much drench each would need (he's ten, so dividing a hundreds number by twenty didn't seem too difficult).

Then we quietly walked them back out to their next grazing, in Mushroom 1.

He's an entertaining child with an extraordinary way of thinking.  I find his company intriguing although quite tiring, as he bounces from one question or thought to another.  I quite like having young visitors and I'm sure it's good for both of us.  On every occasion to date, Jacob has declared he's had the best time ever! 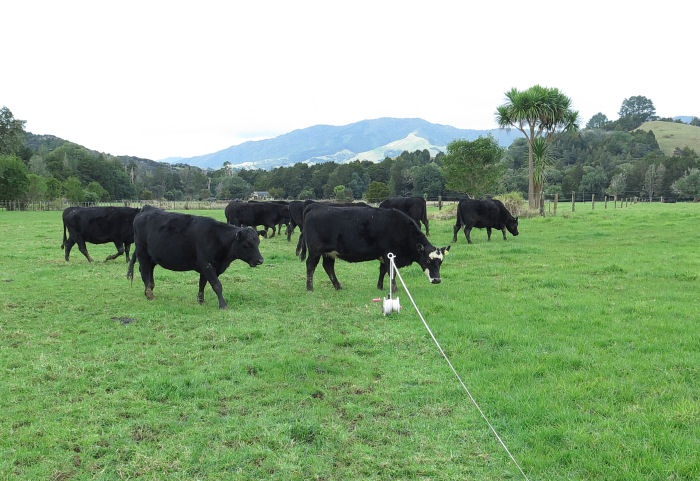 Eking out the grass...  I divided Mushroom 1 in half yesterday for the heifers and went back to give them the rest of it later today.

There are ticks already visibly active on some of the cows. 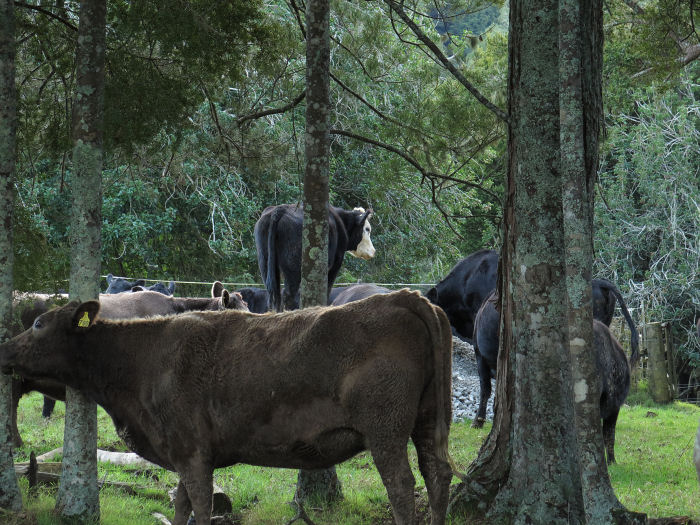 Stephan went out all day to help Brian collect something from a friend in Whangarei and I had a visit from Lilo for a couple of hours.  Late in the afternoon I went out to move the cattle.

White-faced 746 really likes clambering up onto the pile of lime rock, while others just bury their heads and necks in the scratchy metal.

Endberly in the foreground was having a good neck scratch on a tree.  She looks a bit light.  She's not due until 20 October so there'll be time for her to gain a bit of condition again before calving, once the grass starts growing.  The quicker that happens, the better! 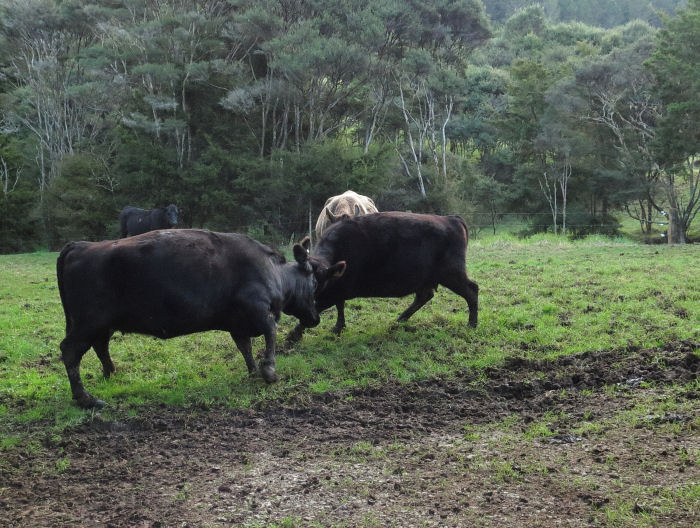 I followed the cows out to the Spring paddock to shut the gate behind them and found these two, 716 and 728, having a furious argument.  Goodness knows why, since they've been in the same mob for months.  What do cows argue about?  Do they insult each other so dreadfully it must lead to this sort of violence?

If you follow the links to their pedigree tables, you'll see they're very closely related, both from the same maternal line with three-quarters of the rest of their inheritance in common.  Crazy cows. 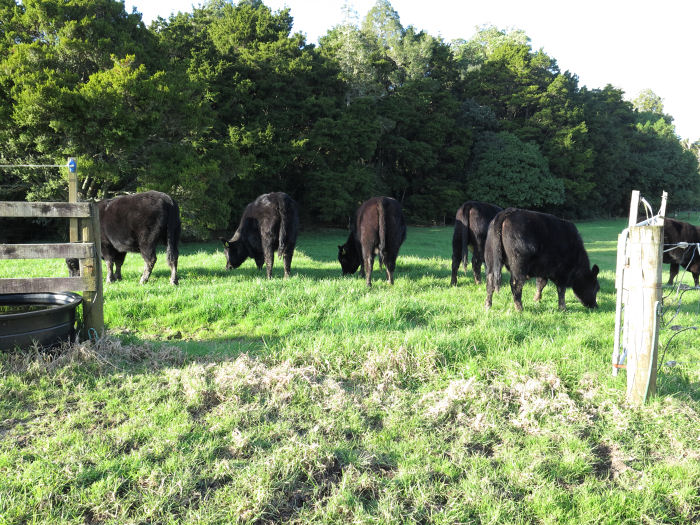 It would be nice if the whole House paddock was growing as much grass as there is at the top entrance but at least it was a fresh bite for the youngsters.

The grass is growing a bit but the temperatures keep being too cold for it to really get going yet. 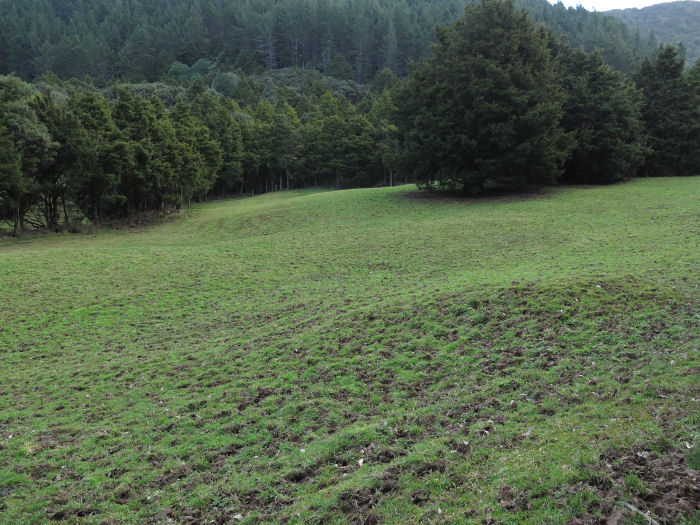 It was another sparkling day today, lovely, although again it came after a cold night.

The Pines must be releasing their pollen now and I'm finding it in the troughs and on the paintwork of the vehicles.

This is a very bare Back Barn Paddock after the yearlings were in here for a bit long.  It has had fertilizer a few times in recent years but I suspect, like much of the farm, it needs more lime. 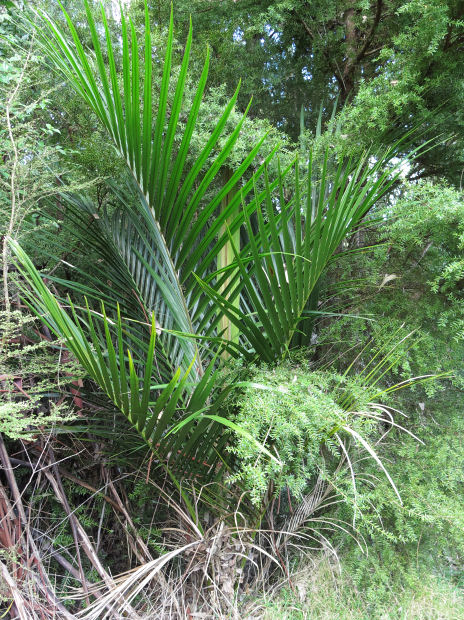 After moving the cows from the Spring (on the other side of the stream above) to the Middle Back (even further off to the left), I wandered back this way, through the reserve at the top end of the property, checking on the various orchid sites.

This is a Nikau palm.  Looking at its loveliness, I wonder why anyone has to grow those awful, gallopingly invasive Bangalow Palms in this country.  They'll end up taking over the native bush, just like so many of the other invasive weed species the authorities are too slow to clamp down on.  People's individual rights still trump the community good.