The week beginning the 6th of August 2016.
Saturday the 6th 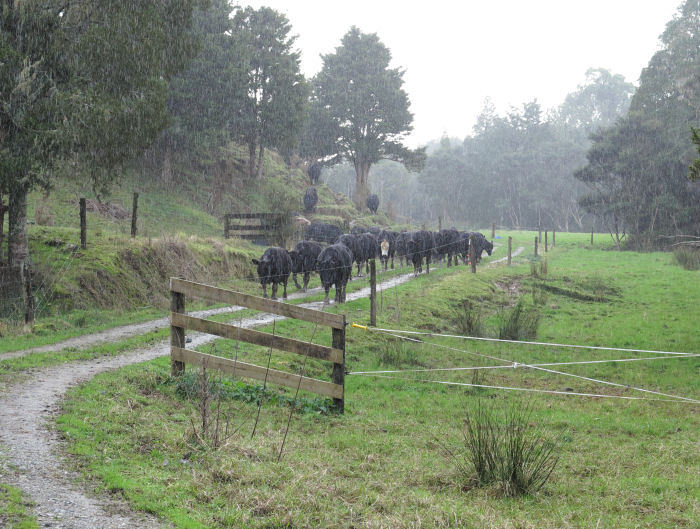 This was a very cold afternoon!  I can almost see the cows shivering in the picture. 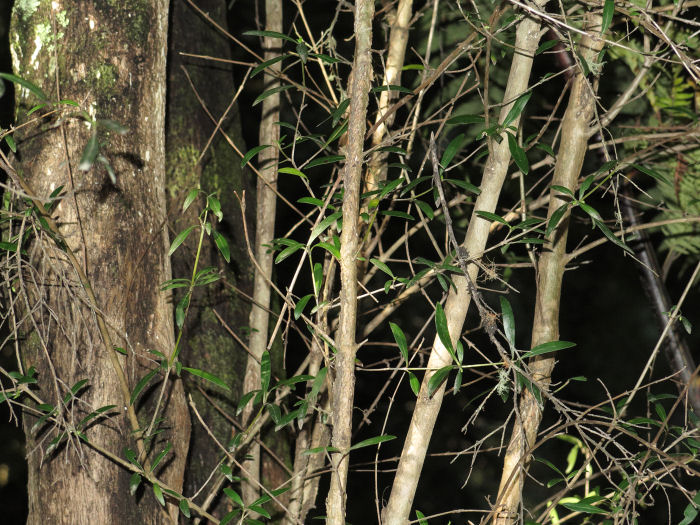 These are the leaves of one of two trees which grow near each other Over the Road.

I believe they may be Coprosma propinqua or a hybrid of that species with Coprosma robusta (Karamu), because of the appearance of the backs of the leaves.  C. propinqua is apparently known as Mingimingi (as opposed to Soft Mingimingi, Leucopogon fasciculatus,which grows very commonly here).

I brought the cows in for their third Copper injection this year.  Last year I lost the plot with Copper and paid the price with empty cows and heifers.  This year I'm making sure I give them enough.  They've had three now while pregnant, so their calves should have enough and then I'll give them another one just before mating and things should be better again. 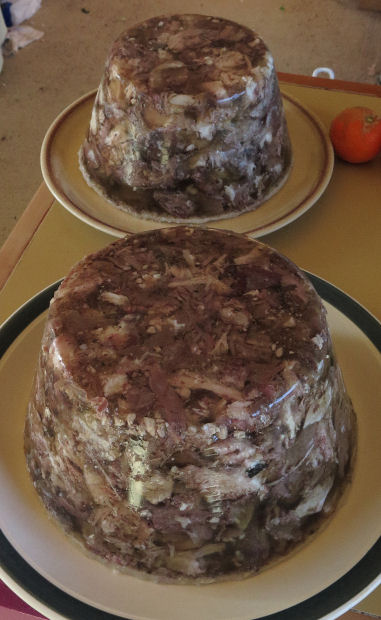 As part of the making-room-in-the-freezers project, Stephan made some pig's-head brawn.  There are still some people around us who like this sort of thing (I am definitely not one of them) so slices or chunks of these two moulds went to appreciative recipients and Stephan ate the rest. 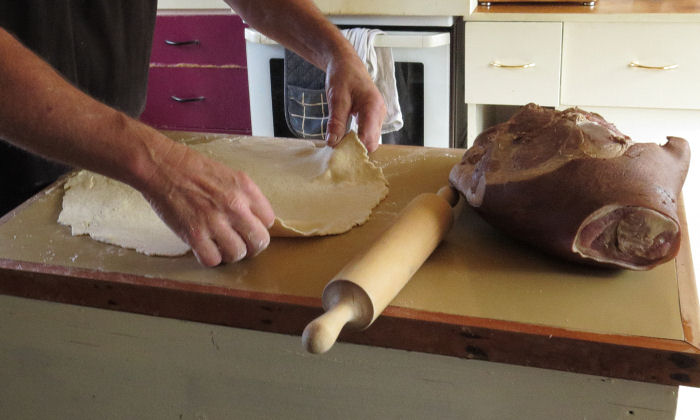 A large ham, thawed over the last couple of days.  We calculated its required cooking time (around six hours by weight) and Stephan made a flour-and-water pastry cover for it to cook in. 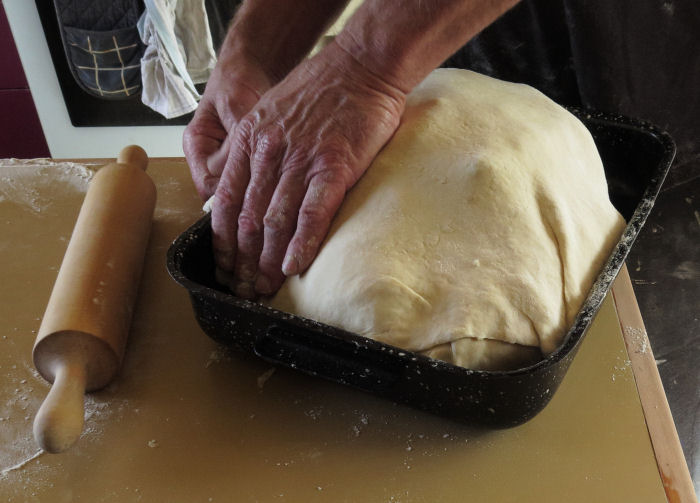 He thinks this is the best one he's done, in terms of covering it well and tidily: it's a fiddly job.  My mother used to cook ham this way so we sort of knew how to do it but haven't found a recipe reference for the method.

Once the ham was cooked, Stephan removed the skin, scored and decorated the fat and glazed it. 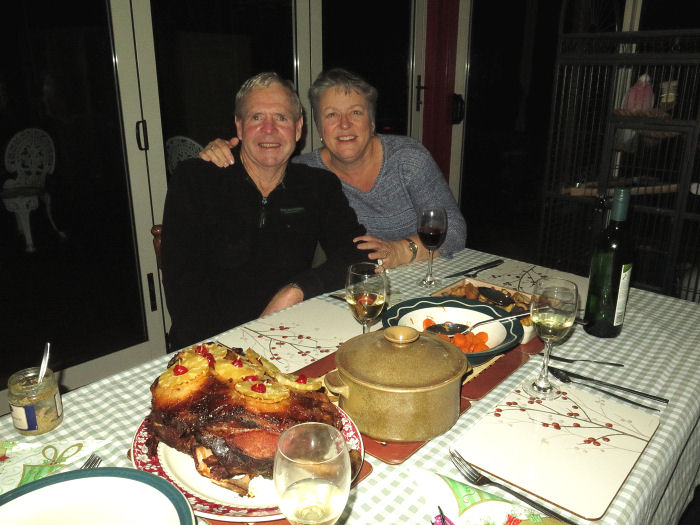 Brian and Gaye happily joined us to eat it. 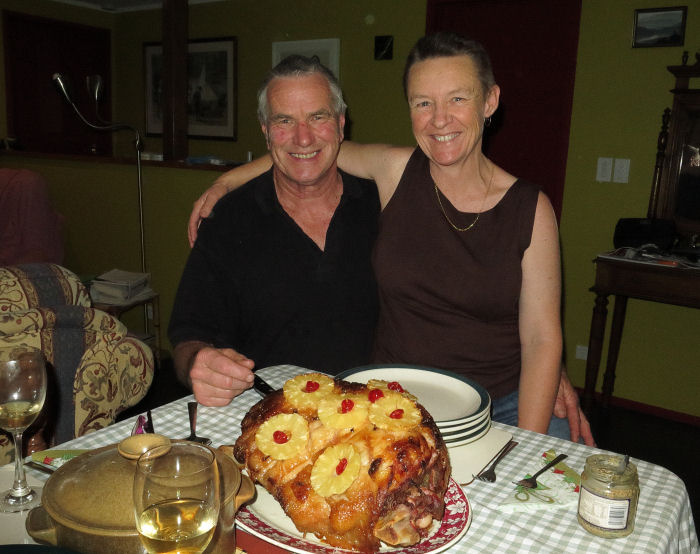 And Gaye took our picture as well.

It was a splendid meal, as usual, with Crème Brûlée and fresh cream for dessert - it's Stephan's dessert special and is enjoyed repeatedly because it is so good.

There was a severe weather warning issued for very heavy rain overnight but we had none.  We always take them seriously but they are often wrong and sometimes there's torrential rain and flooding without warning.  Such is life on one end of a narrow island in the middle of a huge ocean. 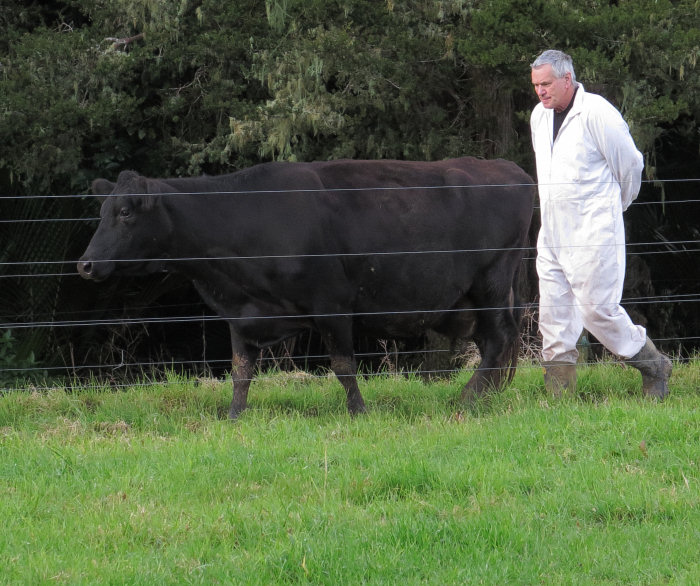 If I'm right about when Zella got in calf, it's time for her to stop being milked, to allow a twelve-week break before her next calf is born.  Commercial dairy cows only get six or eight weeks but I watch changes in my other cows' udders from around this time and believe longer is better.

We usually stop milking a bit earlier than this because by the end of July it has become difficult to feed a milking cow well enough to sustain her in good condition; but this year has been warmer than usual and so the grass has continued to grow.

As we've done for the last few years, we gave Zella a "dry cow" treatment, a long-acting antibiotic up each teat.  Hopefully we won't always need to do that but this year when I tested her milk, she had a mild bacterial infection in one quarter and because we've been trying to eliminate all such problems for her, that treatment is the best option we have.  She was never sick but I'd like her udder to be free of problems - and our milk to be as good as possible too.  "Bad" bacteria in the milk could potentially be harmful and may affect the quality of our cheese, cream and butter, although we noticed no such negative effects this season. 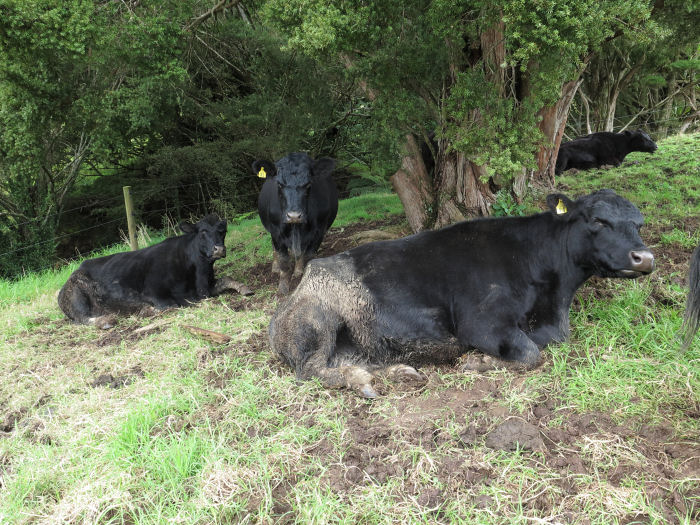 I checked all the cows Over the Road, finding the usual family grouping of Abigail's family together - here Dinky 94, Eva, Dexie 101; Demelza was behind the tree, or just out of shot to the side.

Here's proof that Dinky 94 is not in calf, mud all over her sides where other cows have mounted her during her heat over the last day or so. 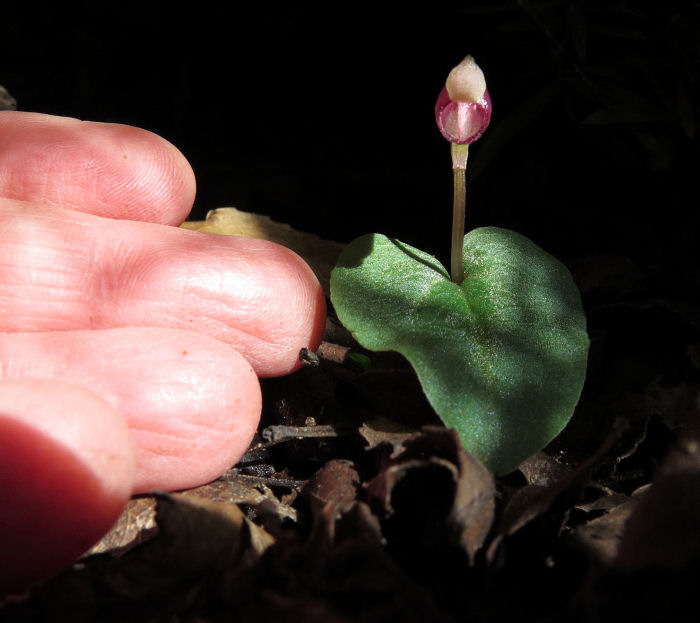 Then I went down through the reserve, across the road and along beside the big felled Pine trunk to check on the orchids which usually grow there.  I only found one of these, Anzybas rotundifolius, beside the big trunk, a larger plant than I've seen of its type before. 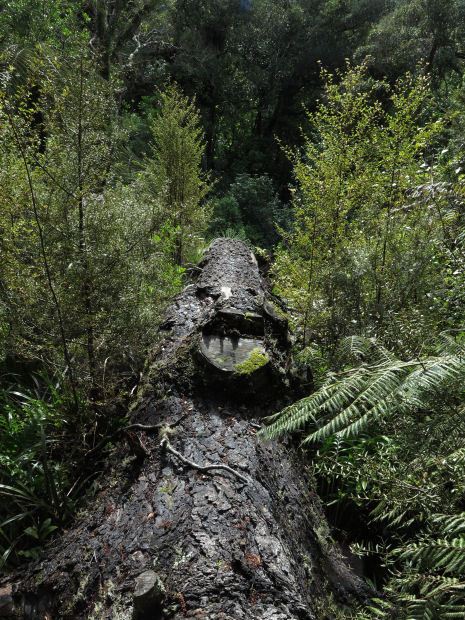 The long Pine trunk has now broken in the middle and new trees are vigorously growing up around it. 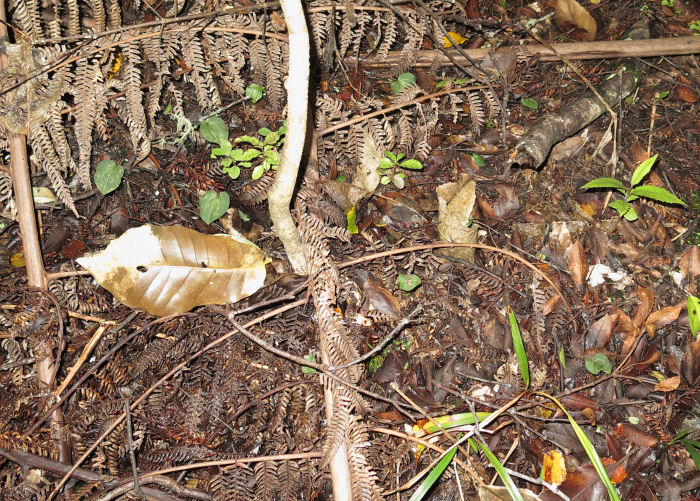 Then over the other side, to the left of the picture above and at a small distance, I found a whole community of orchid plants like that above.

This is an excellent find; I had feared we'd inadvertently destroyed any wider population by dropping the huge tree on top of them. 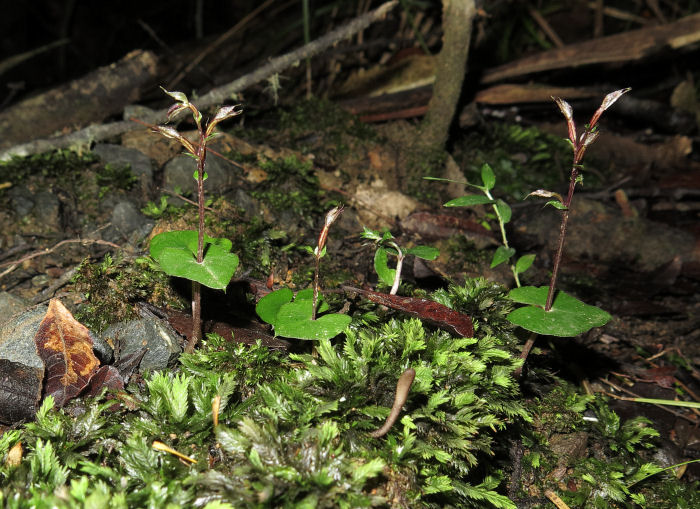 The little Pixie Cap orchids, Acianthus sinclairii, are as usual all over the place.  There are places it's hard to walk now without standing on them.  Were they always here?  I really don't know; they certainly weren't as numerous when I first knew to look for them a few years ago. 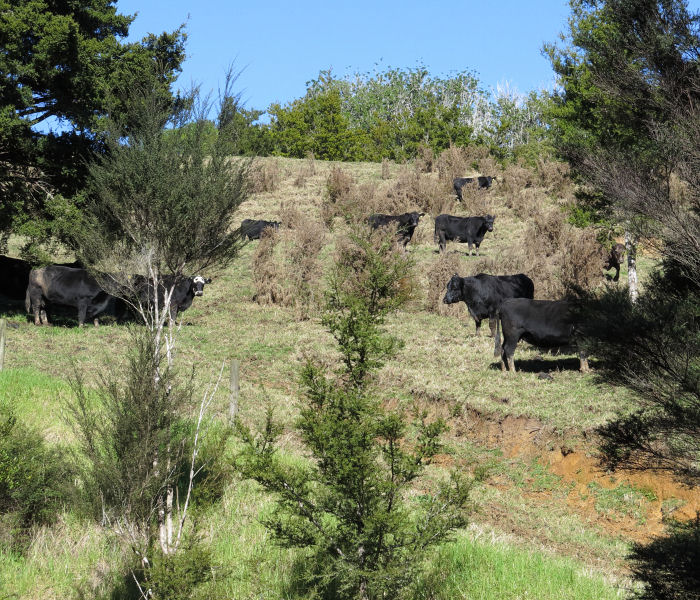 I opened the gate between the larger and smaller areas Over the Road this morning and called and called the cows to come down.  They ignored me for ages, then slowly one started to move down, then another and eventually the whole group from the hillside.  Seven weren't there ... 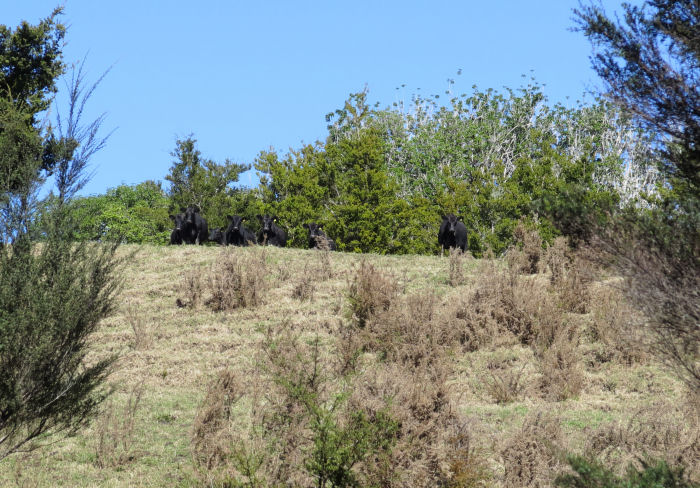 ... but then appeared at the crest of the hill, where they stayed, standing in the sunshine.

I left them to come down in their own time. 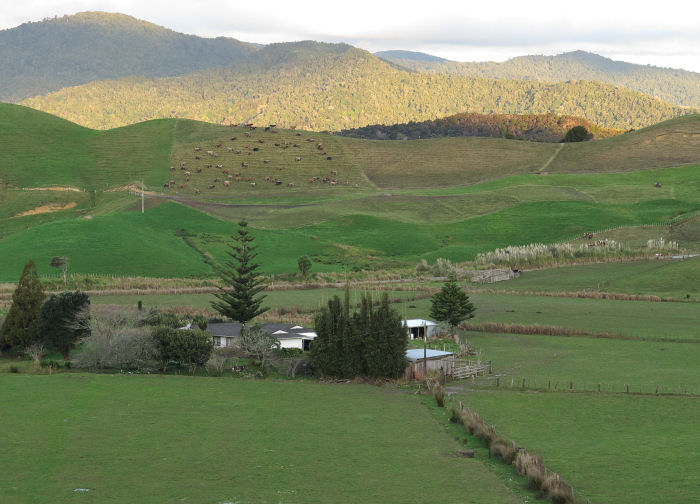 In the evening I returned to check that all the cows were now where I wanted them.

From the top of the hill I watched for a while as someone on a quad moved around the distant hillside, setting out electric tapes for the Jersey dairy herd there.

The farmland down on the flats around that house has been on the market for a few months.  We toyed with the idea of finding out whether purchasing land there would be sensible but it's so wet and there would be dog issues to contend with so we went no further.  While many of our family and acquaintance are quite happy living under the shadow of large mortgages, we went to significant effort many years ago to eliminate such debt and would be unwilling to get in to that position again without very good reason.  On the basis that immediately neighbouring land is always the cheapest, regardless of its price, we thought we should at least consider the possibility. 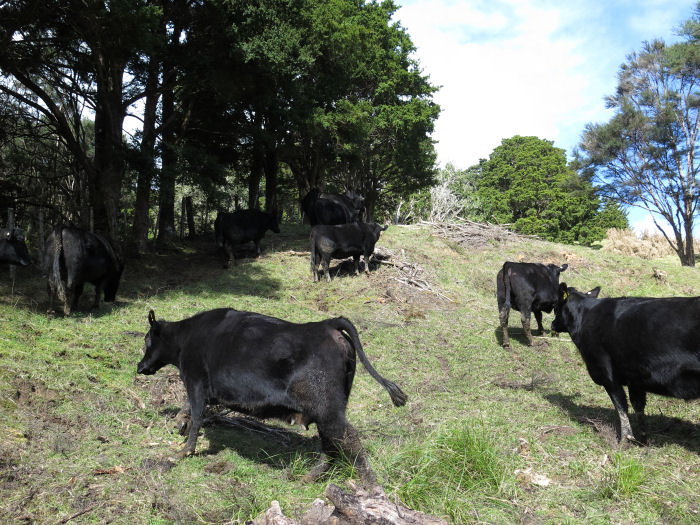 Pushing relaxed heifers up a steep hill is like shovelling smoke.  It is in situations like this that one imagines a dog might be useful but then again, these are fairly heavily pregnant animals and making them run up the hill probably wouldn't do them much good.  It didn't do us any harm to walk repeatedly back and forth behind them to gradually prompt them on their way. 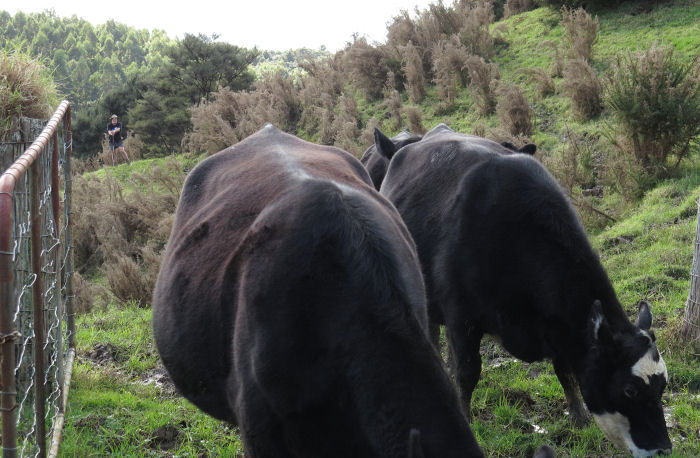 Finally, coming through the gate.

Their condition seems pretty good, with enough fat under their skin to give them a reasonably smooth look.  There's not a lot of difference in size between the near two-year-olds and their year-older sisters, perhaps a little more fullness in the older animal's bodies, but even that is hard to see unless they're standing side-on. 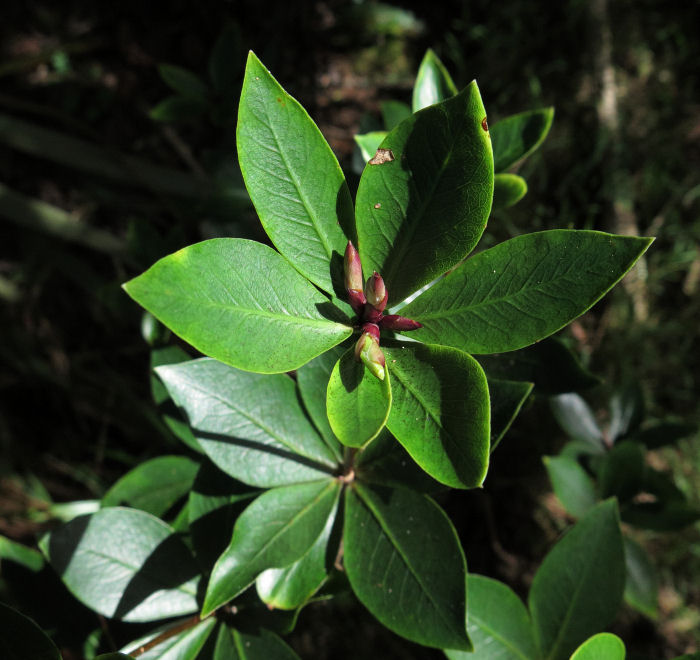 After the heifers were through the gate we went in to the PW reserve for a look around.  The ground-growing usually-epiphytic Pittosporum cornifolium is looking particularly attractive with new shoots ready to burst. 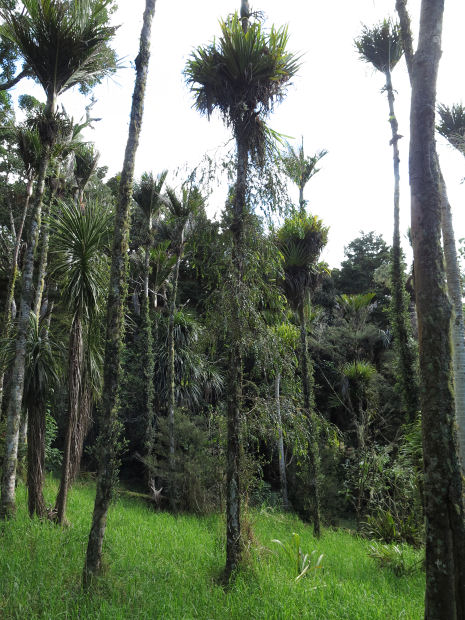 There are a great many mature Nikau Palms in here.  There's lots of light but I wonder if there was an enormous tree here in the middle of this area at one stage.  There's quite a bit of fallen tree material around but because of the length of the grass, it's hard to tell if there is (and I can't remember there being) anything significant on the ground.  The cattle had access to this area all the time until we fenced it off so it is possible that the clearing exists because then nothing was allowed to grow and only the existing, larger vegetation was able to survive grazing pressure. 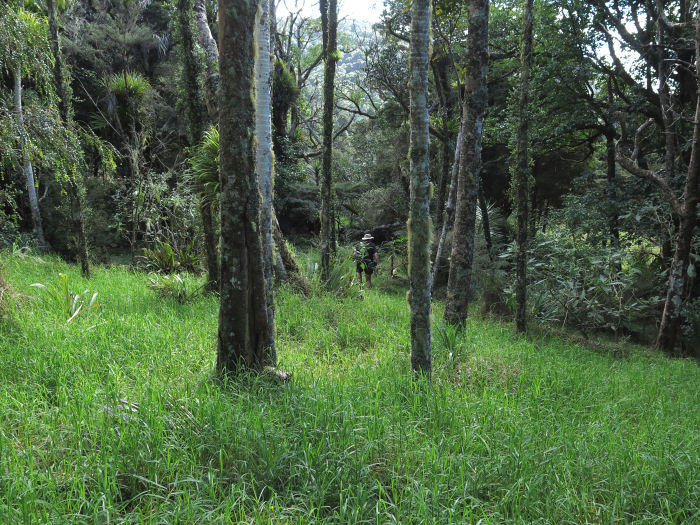 Stephan went in search of a trap he hasn't serviced for a while. 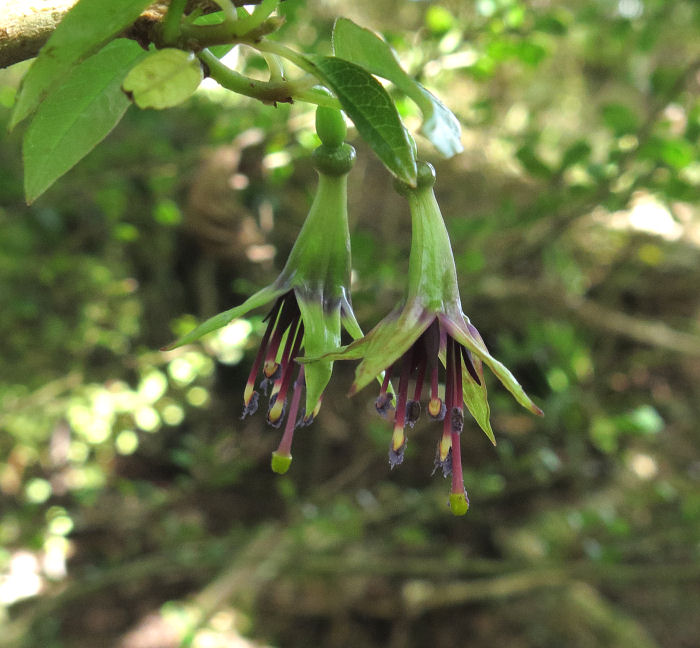 I thought this Fuchsia tree had been chewed to death, but here it still is, flowering.  I don't know what eats them but something obviously finds them extremely palatable; presumably possums. 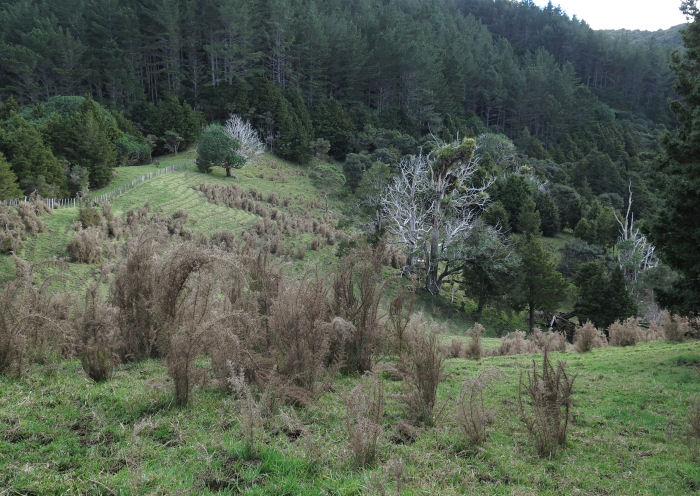 Then out into the paddock again.  I often despair of ever getting this paddock under control with its thick covering of Australian Sedge on the lower slopes and gorse up here.  I had hoped the sedge was the native variety, which spreads less quickly but it turns out it is the import and we really are going to have to work harder to get it under control. 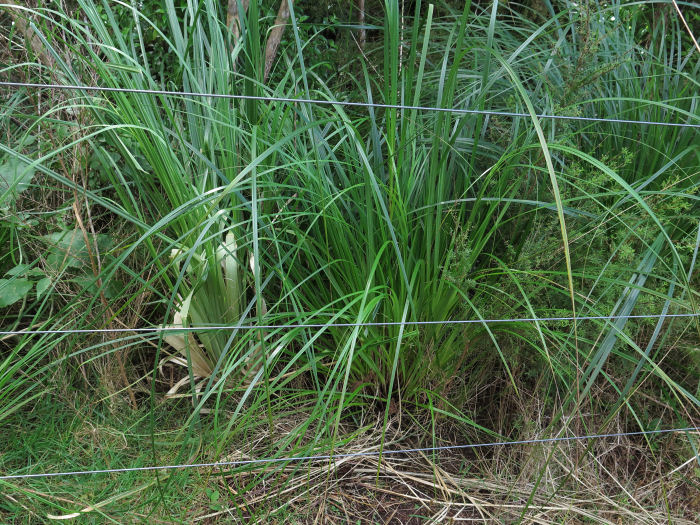 We walked down over the ridge to the left of the photo above and on the other side of the big swamp, in part of its tributary reserve area, spotted these two plants, usefully growing next to each other for comparison: a pampas (left) and a Toetoe.

They're often distinguishable by the appearance of the base of the plant, the pampas having the dried, curled leaf remnants but sometimes it's helpful to have other pointers. 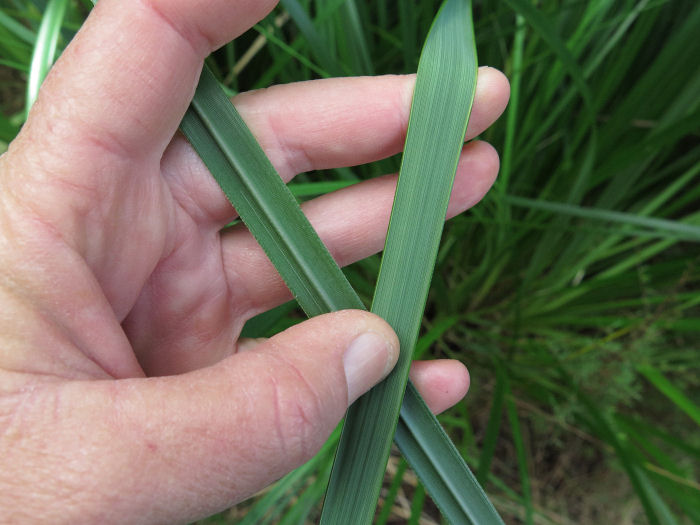 Looking at both together, we discovered this very obvious difference in the undersides of the leaves: the pampas has a very definite central ridge, where the Toetoe is flat. 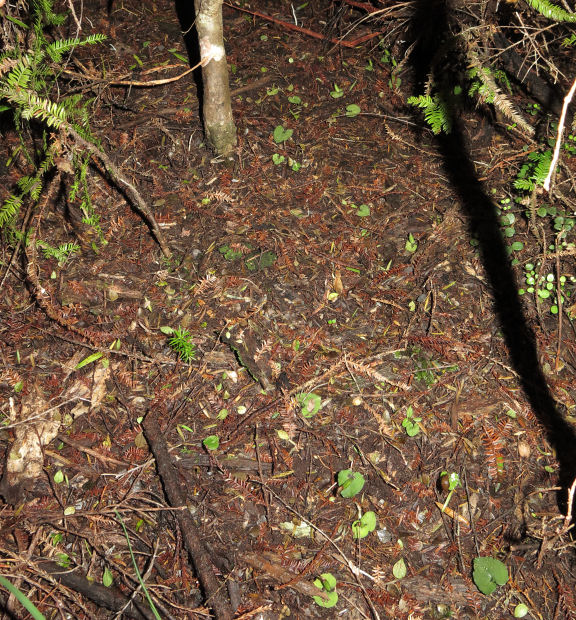 Continuing on our reserves walk, we went through the fence at the bottom of the Big Back South, in to the Bush Flat reserve and through the trees toward the Bush Block.  I checked the area up the boundary fence where I've found tiny orchids before but they'd either already bloomed and gone or were not there this year.  But further down, back in the Bush Flat reserve area, I spotted all these little plants together in one spot.  They are Corybas cheesemanii.