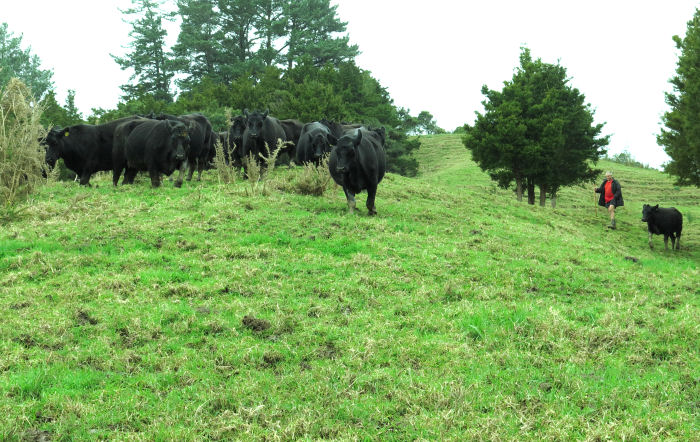 Bringing the pregnant heifer mob down the hillside Over the Road.  They'd been here a couple of extra days after I didn't shift them to the other paddock because of last week's trespassing calf. 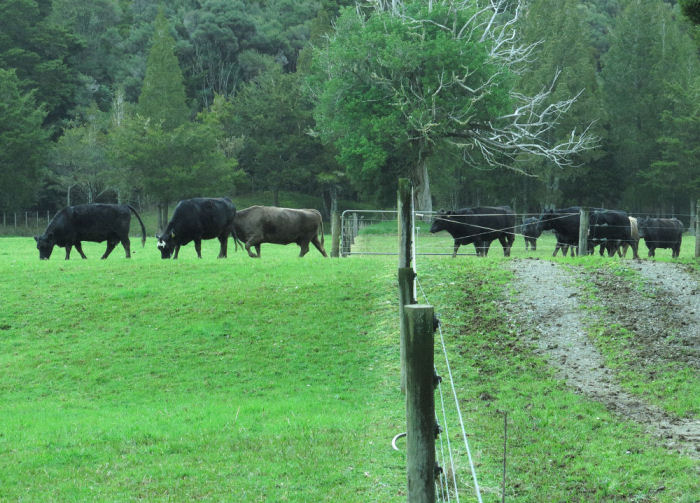 The cow mob, moving from Mushroom 2 to Mushroom 1. 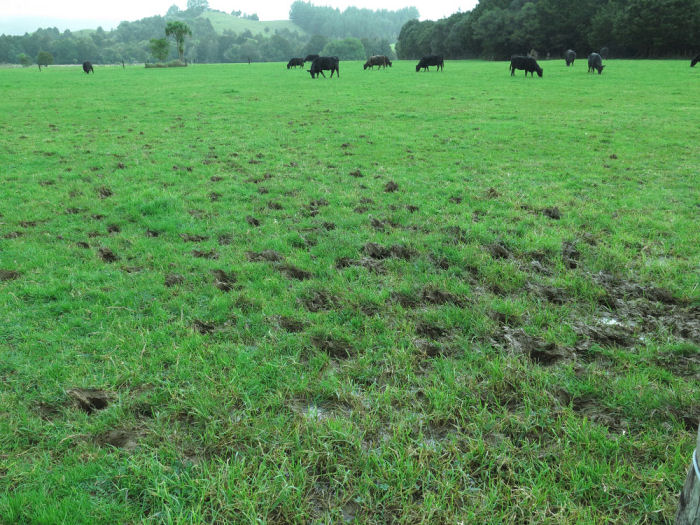 The ground is horribly wet and soft. 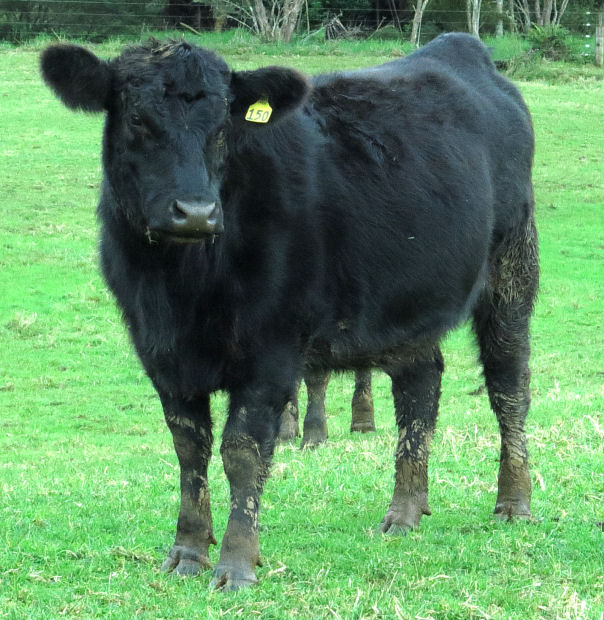 I like 150 a great deal.  I don't think there's anything exceptional about her in terms of the animal she is but she's nice; she's a nice individual to be near and spend time with. 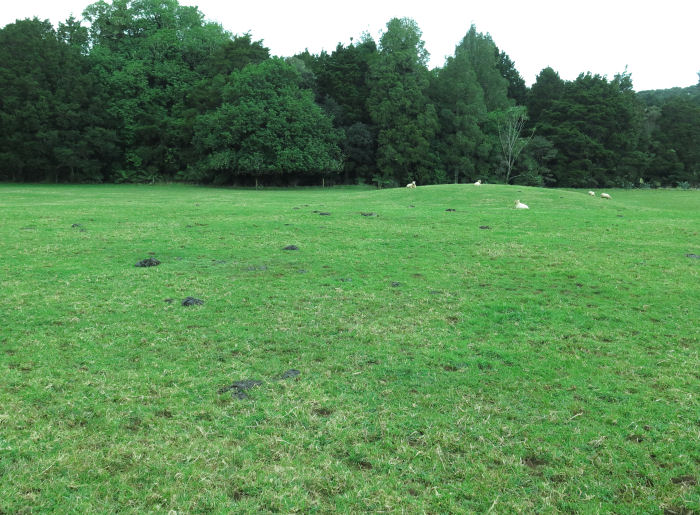 The heifers spent the night here in the House paddock.  It has been lovely and smooth-looking and green while the sheep have been here.  Now there are cow pats again, they're quite noticeable.

The goose disappears when there are cattle in the paddock with her.  Late last year we lost her for several days and thought she'd died but then found her in the stream, where she'd presumably taken refuge.  She only likes sheep. 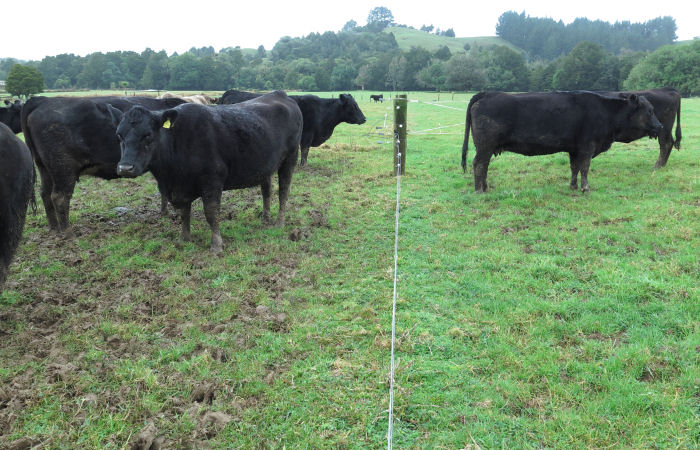 Late yesterday I'd put the cow mob in Flat 5d, closest to the Mushroom paddock and the thin/pregnant mob next to them in 5a.  This morning I noticed a cow in 5c, where she ought not to have been.  (There are some trees in the way between the house and the paddock, so could only see one.)

I went out to investigate and shift them and found three cows where they shouldn't have been, one of the heifers in with the cows, and broken fence wires on three fences! 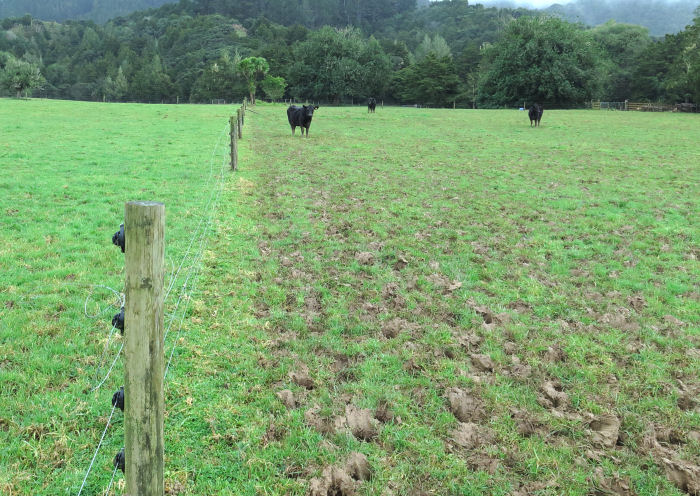 Looking back toward the Mushroom paddock, Eva, in the distance, was sitting down and got up slowly, looking like she may have been knocked around a bit.  The top two of the five wires on this fence were broken and coiled back in a tangle. 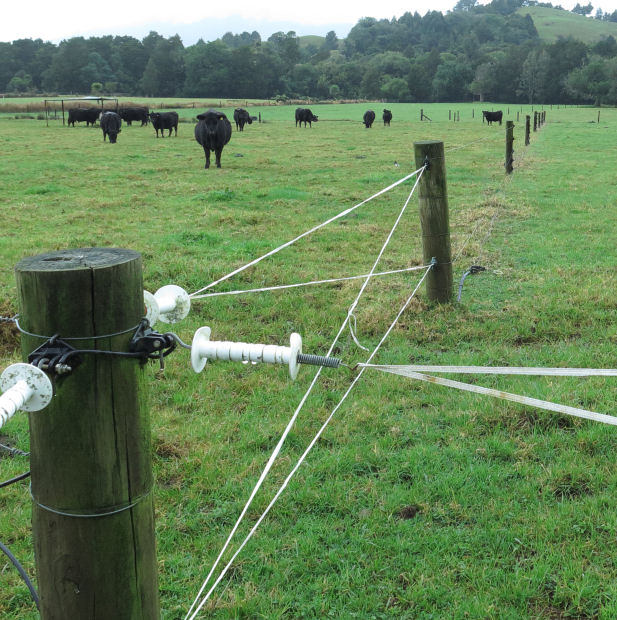 Between the heifers and 5b (on the right), the second and third wires were broken, although nobody was on the wrong side of that fence.

Between the two mobs, the second, third and fourth wires were broken and there were broken insulators all over the place.

It was while I was walking along the broken fences looking for footprints of some invading creature that might have chased them that Stephan called out, "thunder and lightning!"  Last night, at around 8.30, there had been an almighty clap of thunder and I had wondered if the cattle might have been disturbed but even if I'd listened outside, I'd not have heard any noise above the torrential rain. 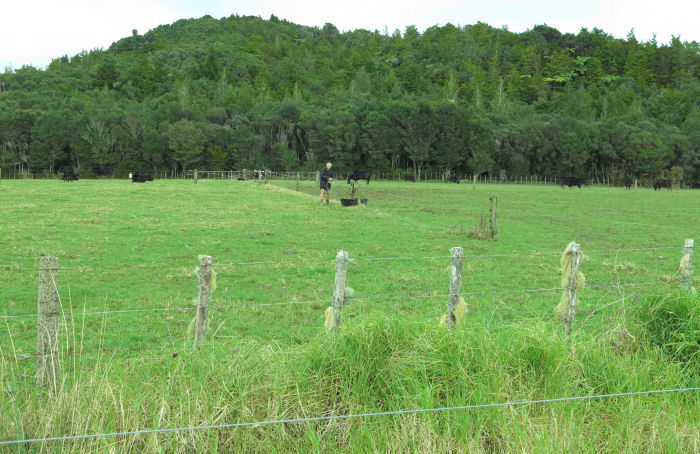 After Stephan made sure the loose wires weren't going to catch anyone's feet, I let the cows through to 5d, the through-the-fence heifer into 5b and then let the other heifers join her there.  She was a bit muddy, as though she might have had a few scuffles, but appeared otherwise ok.

Presumably somebody panicked and then everybody stampeded and ran into the fences, some rocketing through.  I couldn't see any injuries but will watch carefully over the next few days to see if anything surfaces.  There may be some sore places on many of the animals.

A freezing-cold squall came through while we were sorting this all out and I went off to find shelter, while Stephan carried on reconnecting wires.

Later we noticed that the fence along the left end of 5a (the paddock in the foreground) was all loose and a post had been knocked sideways.  Someone/everyone must have hit that fence too.  My poor cows! 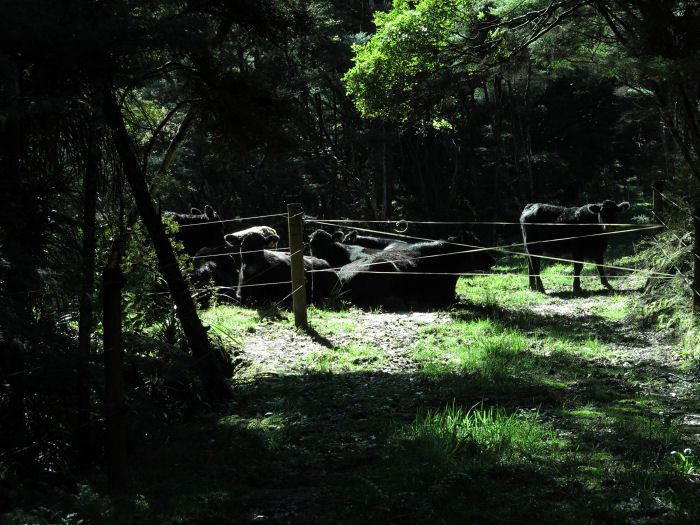 The young mob were all sitting in the sunshine at the eastern gateway in the Swamp East, so no trouble there. 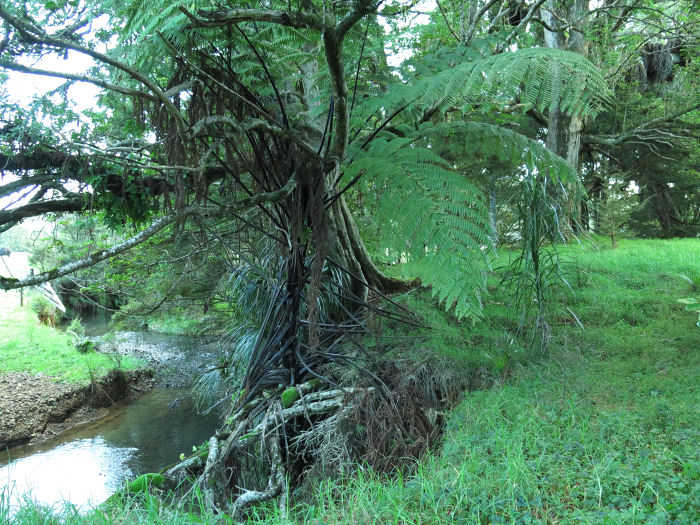 Here is another view of the worryingly leaning Puriri.  They are such hugely heavy trees that at some point they must lean too far for the roots to hold onto the ground.  Most of the trees that have fallen in recent years on the farm have done so because they've cracked through the trunk, but some of the older fallen trees I've found have gone over with their roots coming up out of the ground.  In those cases, the trees have continued to grow; this one won't be able to do that, since it will fall into and block the stream.  Hopefully it won't fall on top of anyone when it goes. 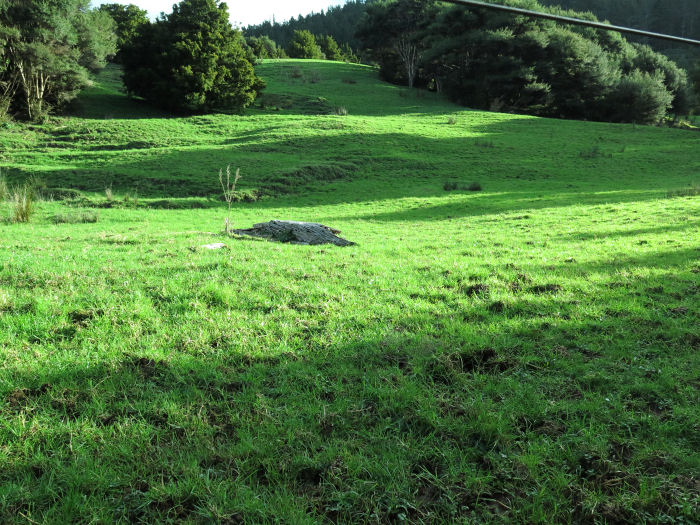 Grass continues to grow, albeit slowly most of the time.

The slumping middle of this hillside in the Spring continues to move.  I mean to find an expert at the Regional Council to discuss this process.  My assumption is that it is water movement far underground that causes cavities to form well beneath the surface of the hill, so planting on these slopes wouldn't make any difference to their movement.  But I'd like to check that theory with someone more knowledgeable than I. 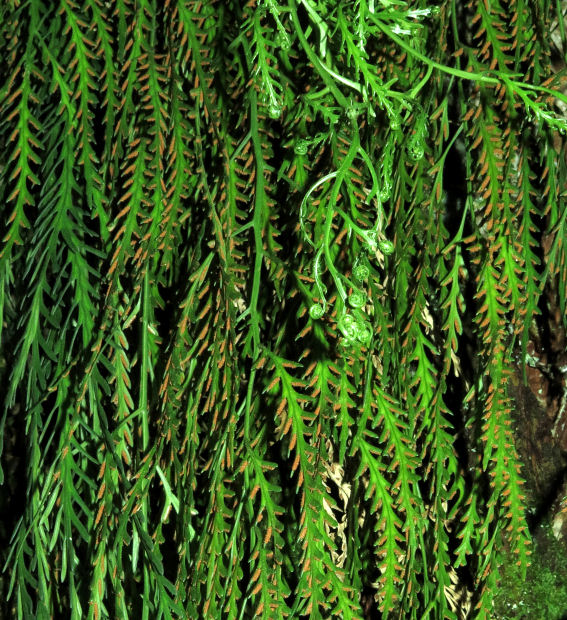 A new Asplenium flaccidum frond unfurling and the others behind with spores.  For most of the year the fronds are leathery, smooth-to-the-touch, green and lustrous. 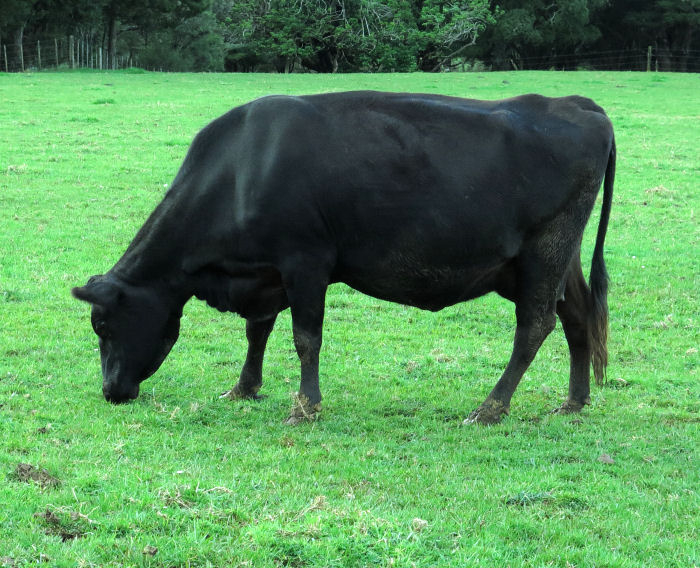 Zella is not in quite the same condition as last year, when she got quite fat.  She and Demelza have been staying for long periods in the same paddocks, on about the same feed levels as everyone else but without the numbers pressure.  It's just a really manky winter.

I made my brother-in-law Roger a new website today.  He has recently completed his long training as an acupuncturist and is setting up practice in Grey Lynn (Auckland), where he, Jude and my favourite children live.

Roger's quite short and has long been "The Little Greensman" in his film and Television greensperson career; he suggested his new website name could be littleprick.  I thought that would be very funny but perhaps not entirely appropriate. 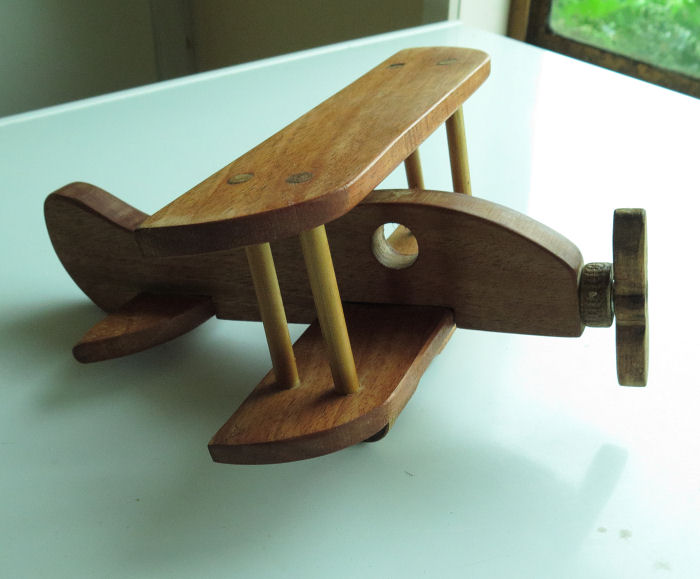 Stephan has been playing around in the workshop, experimenting with making wooden things.  He appeared with an elephant and a bear on wheels a couple of days ago, then a helicopter and now this.

This is apparently what Superannuitants do.  Actually it's what someone with a dodgy knee does to stay sane when he can't get out on the chainsaw for long or when the weather is hideous.

Being in receipt of a no-strings income has inspired discussions between us about the country's social welfare benefit system and the Universal Basic Income movement.

I have become aware that I'd got carried along with the general argument the present government runs, that anyone in receipt of government assistance must show that they deserve it.  But then, having been in and out of Work and Income NZ (WINZ) a few times recently, once with Stephan to apply for his Super and twice supporting another member of the family, I've been reminded how people are made to feel in that system.  It's demoralising, dehumanising; no wonder it traps people in a downward spiral of despair.

What would happen if we didn't make every beneficiary of social welfare assistance line up and debase themselves as they front up to WINZ officers?  What would it potentially do to people's sense of dignity and personal worth if we decided everyone is simply entitled to have some money to buy food or rent or whatever they may need?  Maybe even those who then spend it on drugs of any variety might begin to feel some control over their lives and addiction/s when they are not made to feel unworthy of even the paltry amount of money the rest of us allow them from "our taxes".

It's no good putting in more restrictions, more hoops through which people have to jump.  The system must be changed.  The problem doesn't even apply only to the people on the public side of the desk; the workers within the system are apparently not allowed much autonomy either, being subject to some sort of automated time schedule which determines when they are to leave their desks for breaks.  I wonder if that tells them when to go to the toilet as well?  Awful.

As for us, thankfully I don't think we have to go back to that horrible place again for many years.  Stephan doesn't have to prove anything to continue receiving Superannuation, just stay alive.  It's not a huge amount, but it is $300.15 each week that we weren't getting before.  For 18 months we'd been living off the farm and my writing and Vet Council work.  We nearly always had "enough" but sometimes we ran a bit close to the bone.  For some people we know of Super is just savings in the overseas holidays account; for others it barely pays the rent.  For us it's providing a sense of relief, being about the amount Stephan was pulling in from his trapping job, which was about how much we had worked out we needed for a financially stress-free life.  We are fortunate people!