The week beginning the 5th of August 2017.
Saturday the 5th 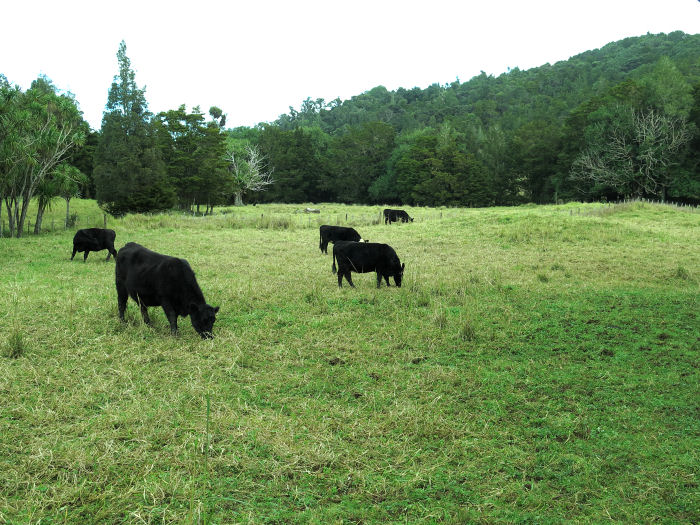 We brought the thin/pregnant heifer mob across the stream to the Road Flat yesterday and they're cleaning it up nicely.  I was surprised to watch 150 getting stuck in to the lush buttercup which covers some of this area.  Other people have told me that cows won't eat buttercup.  Ours do.  Maybe they're that hungry.

The fence is our boundary with the upstream 10-acre neighbours.  The road is off to the left of the picture. 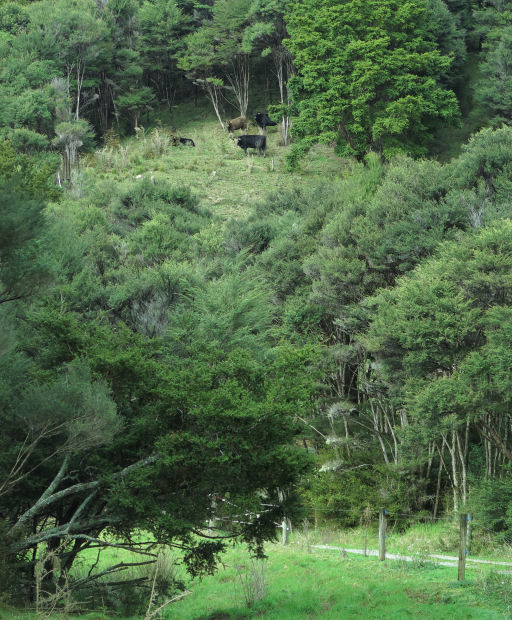 Here are a few of the young mob up on the PW hill, the photo taken from the track coming down from the Back Barn, alongside the Swamp paddock. 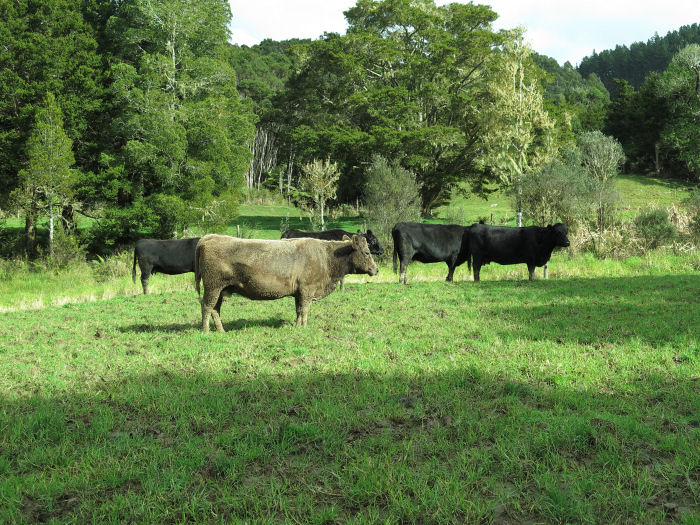 Some of the cows standing around in the Big Back North.  Others were standing up the hill, chewing their cud.  When I returned from a walk up the paddock, several of them had settled down in dry patches under the trees.  It's a tough time of year but there are still comforts. 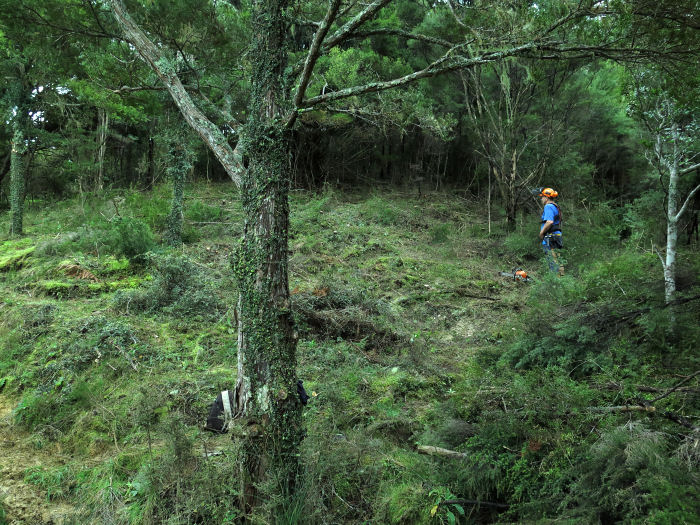 Stephan continues to carefully walk out here and do a couple of hours' work as often as he can and is making great strides into the clearing of this part of the Big Back North.  He's still working out from the gullies we'll fence in the summertime and then up to the ridges.

There are big, spreading Totara trees on the best bits of the ridges and Stephan's pruning them so they still provide some shelter but don't stop grass growing on the ground beneath them.  This will never be fantastically productive paddock area but it will be better than it is now, as far as farming cattle is concerned.  Farming with trees. 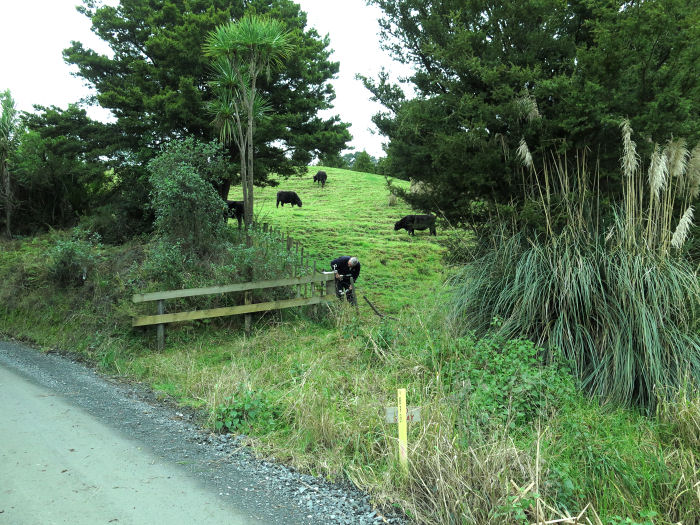 Still no gate and another shift across the road from the Road Flat.  This has become a semi-regular rotation. 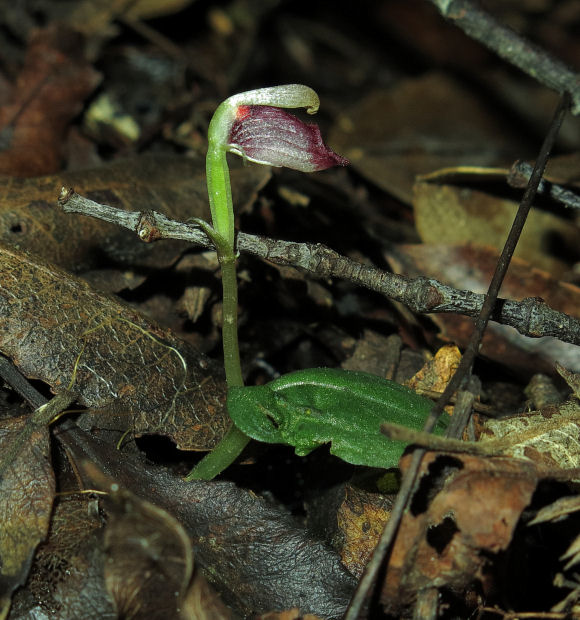 I left Stephan wiring up the gateway again and ducked into the bush by the roadside to check for orchids.

Some, like this Anzybas rotundifolius, grow in the same place every year but occasionally I find others around the same location.  I should carry some plastic ribbon to mark where I see them, but rarely think to put some in my pocket before I come here. 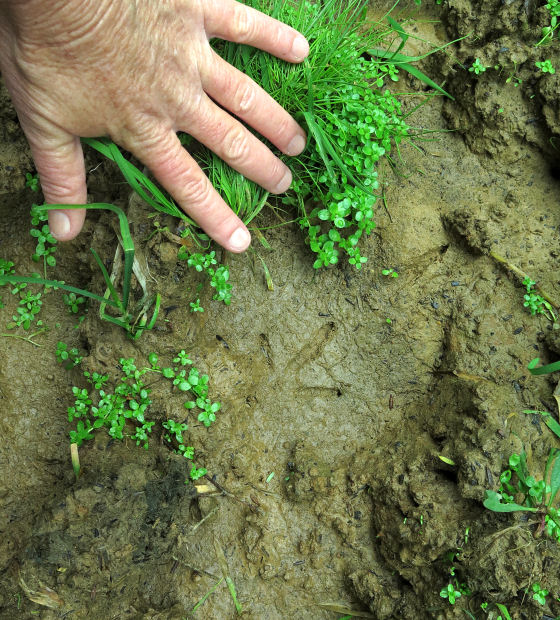 At the other end of the Over the Road paddock I put Iodine in the trough and found more footprints.  Maybe they're all just pheasants.  I don't know.  I've always thought them slightly too thick and heavy for light birds, but maybe that's what pheasant prints look like when the mud is soft.

I know some of the prints I find must be Kiwi, since I hear them calling often but maybe there are fewer than I like to think. 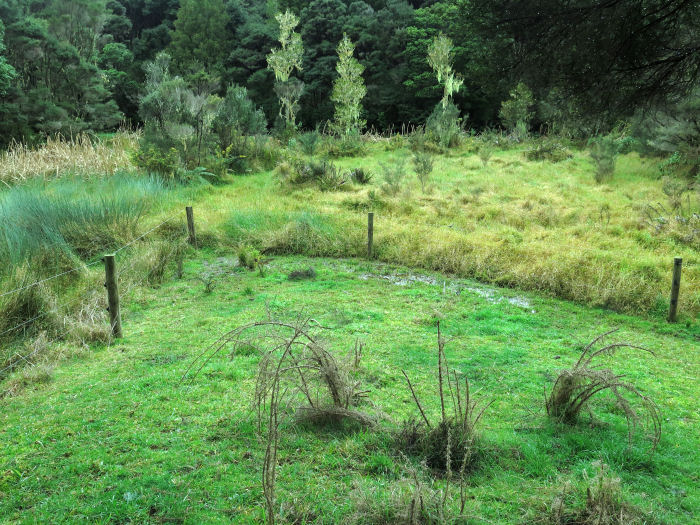 An interesting development: as the swamp here has filled with vegetation, the water is now flowing out over the lowest bit of the area we kept as paddock.  We'll either have to dig a channel around the outside of the fence to stop this, or move the fence up a bit higher. 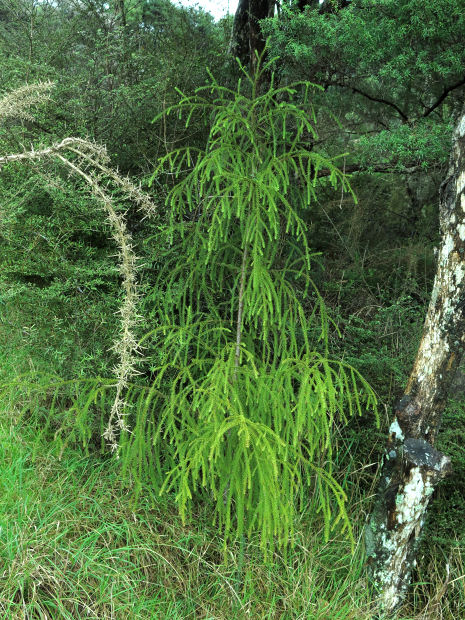 The little Rimu sapling inside the reserve has put on significant growth since last year.  It looks like it's thriving. 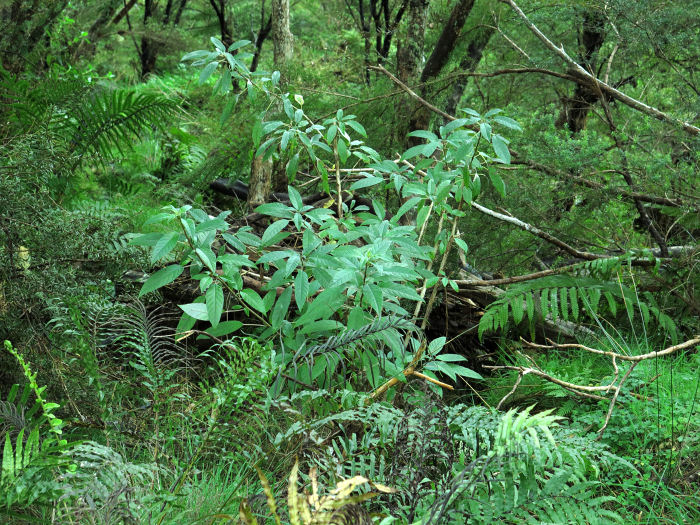 At the end of the Swamp paddock area, in the reserve near where the water exiting the swamp joins the Taheke Stream, grows another Tree Fuchsia.  I can't remember if I've spotted this one before or not.  They are popping up all along this stream now that the cattle aren't browsing the banks.  Lovely.

Weirdly, along the banks of the stream from the other side of the farm (which has no name on the topographical maps), the dominant equivalent plant is Tutu, Coriaria arborea. 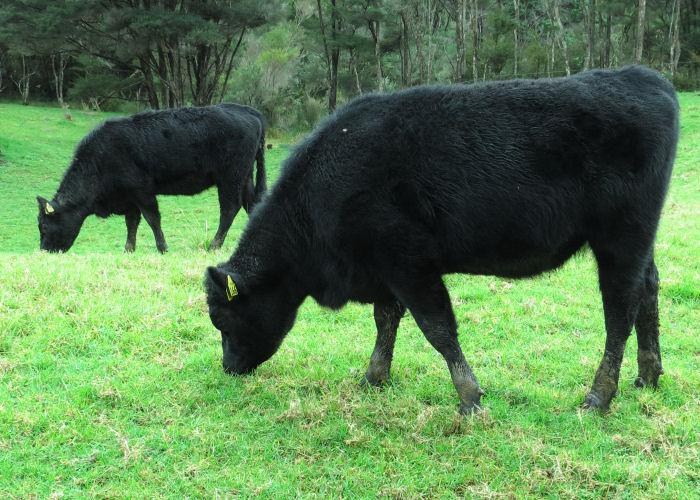 Skinny Gertrude 162 here at left, with 166 (how have I not named her yet?).  I've been thinking that it may be beneficial to wean my replacement heifers much later than I currently do - or at least last in that process, after the other calves have been weaned for sale.  Keeping them on their mothers for as long as possible would continue the gut-protective action of milk feeding while they continue to develop their own immunity to the intestinal parasites which challenge them, most particularly, during their first winter. 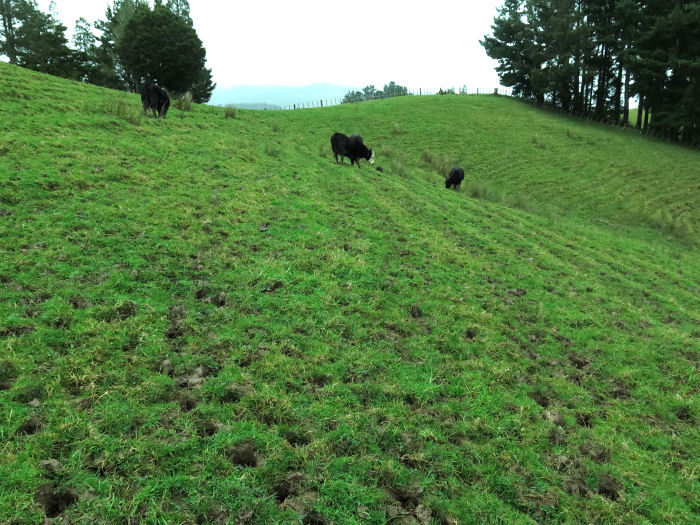 Another pugged hillside, here Over the Road on the western face. 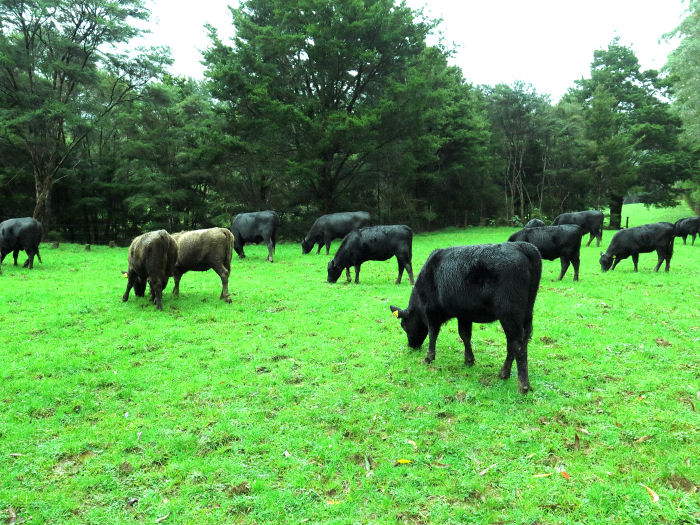 Even the thinnest of the young cattle don't look too bad here (or perhaps Gertrude was out of the picture).

This is not ideal grazing.  Our rotation through the paddocks has reduced to around 14 days, which is far too short, but pretty normal here for this time of year.  We could grow a lot more grass if we could leave the paddocks shut up for longer between grazing.  The secret to being able to do that is subdivision: making a lot more smaller paddocks and thereby controlling the grazing much more tightly.  The animals would end up doing better, overall, because we would grow more feed.  But we're not there yet.

I could apply a bit more control by the use of electric tape but there's a lot of work in that option that I have chosen not to take on this year. 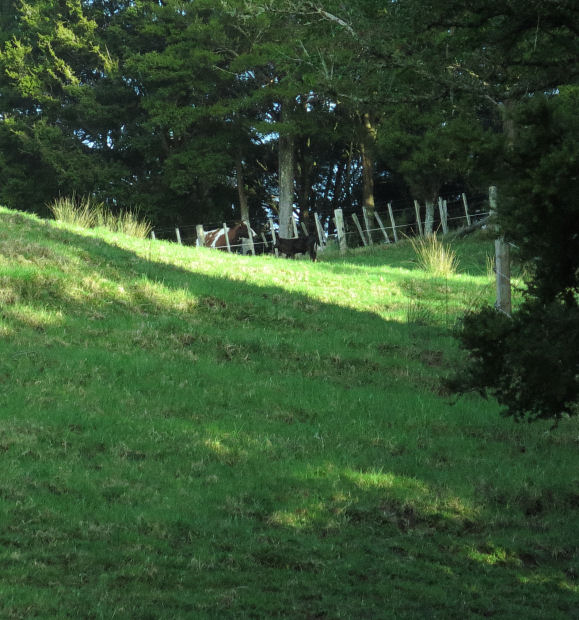 I was trying to get the thin/pregnant heifer mob to follow me through the gate from the larger section Over the Road to the smaller part and fortunately happened to look up the hill as I was doing so, to see a calf!  I immediately stopped the heifers again and shut the gate.

I went back to get Stephan, since I knew even if I could catch it, I'd not be able to lift that calf over the fence.  It took a bit of catching, too, both of us cornering it before he grabbed a hind leg and wrestled it to the ground, before heaving it over the fence and back to its mother.  Then we went looking for how it got through the fence.

Our fencing contractors on this boundary fence were not as good at their job as they should have been and had not sufficiently footed a post in a low spot, which has now lifted almost entirely out of the ground, leaving a gap underneath.  From our side it doesn't matter very much but it's much easier for an animal to clamber up through the gap from the low side, which this calf did - not for food but presumably in confusion after sleeping, or pushed through by others.

I will now have to leave the paddock ungrazed again for a while, since I'm always suspicious of other herds' BVD status.  The cows belong to the nearby dairy farm, whose owner has leased this area for a while from its new owner. 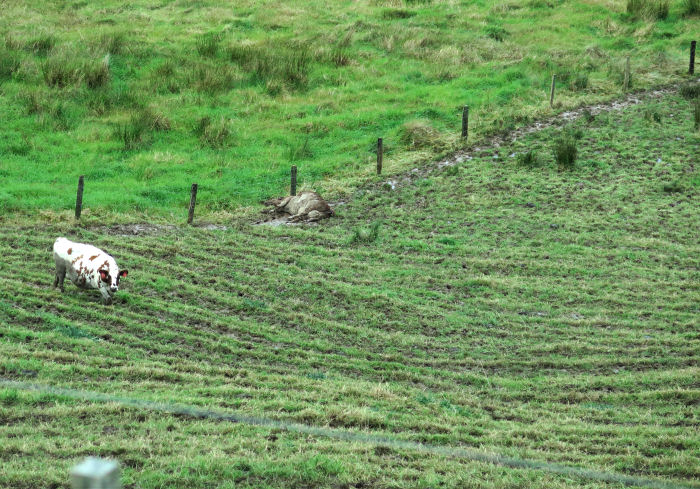 Walking down the fenceline Stephan asked, is that a cow?  I hadn't even noticed her, camouflaged by the mud all over her sides.  She looked dead to me but then she vaguely waved her back leg.

We went home, tried ringing the owner, followed up with a visit, found nobody home, so Stephan went next door to the owner of the long grass on the other side of that fence and with the help of visitors there, pulled the cow back around from under the fence so she could regain her feet.  She was wobbly but able to stay upright.

Stuck like that with her head under the bottom wire of the fence, she couldn't move to right herself and would soon have suffocated - a cow needs to be sitting up to burp the continually forming rumen gases and if down in this position for too long, the rumen eventually fills and, pushing against the diaphragm, prevents the cow from breathing, so she suffocates.  It is for that reason when anaesthetising a cow, you can't have her down flat for too long. 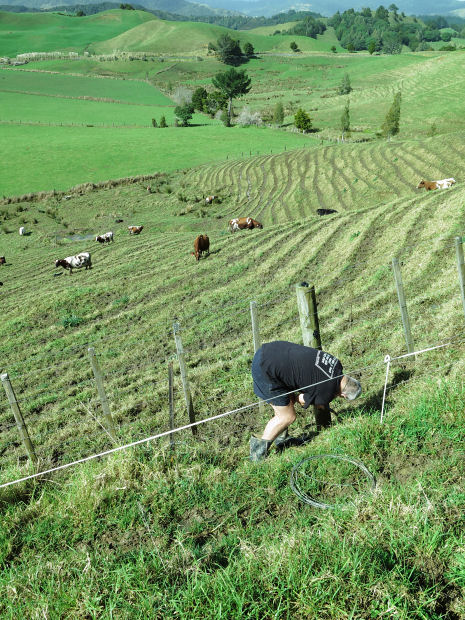 This morning in a fine break between showers we climbed the hill with various materials and tools to plug the hole in the fence.

Stephan will have to come back when things dry out, dig a properly footed post in and then pull the wires down again to the correct positions.

I spent some time thinking about those cows, their feed level, the situation they were obviously in for one of them to get into a near-death position and came to the conclusion that there's a lot of "there but by the grace of god ..." in farming.  We're all having a tough season and I've been similarly caught out with cows with calves and nothing to feed them in other years.  Sometimes cattle get into dangerous positions and you don't always find them immediately. 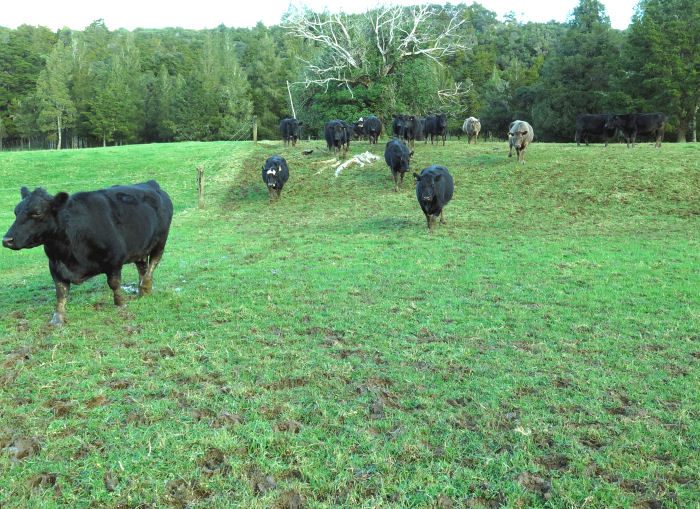 My cows aren't on any more feed.  The difference is primarily that this lot are still at least six weeks away from calving, so their feed needs are different - a deliberate change in calving timing to account for the difficulties of early spring.