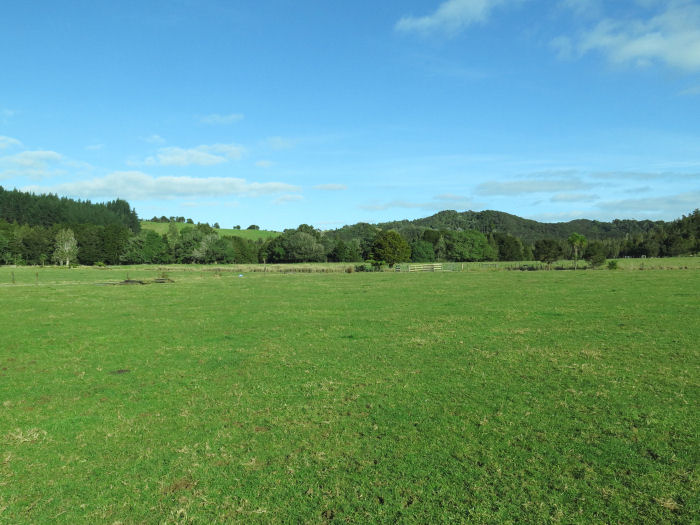 Fine days this winter have been few and far between and are very welcome when they occur.

Stephan went off up into the bush to unclog our new water filter - not quite working as well as we'd hoped, might need some modification.  I did a bit of Australian Sedge weed-wiping, with Floss on my shoulder and let her walk home behind me for some distance.  She likes a walk.  I'm always worried that a stoat might dash out and grab her as we pass its secret hide.

From somewhere in the middle of this picture, we now suffer the almost-constant noise of a generator.  We have new near-neighbours who run their generator for hours through most days and late into the night.  During the winter that hasn't been too troublesome but once I start spending hours out in the fields watching calving cows, it's going to become increasingly annoying.  We might have to go and introduce ourselves and ask them about their future power-connection plans.  Perhaps they have little idea of the negative impact they are having on some of their neighbours. 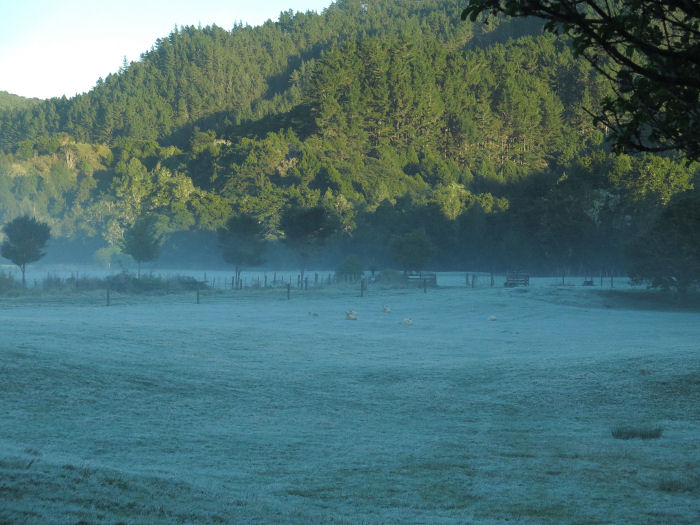 With fine winter days come frosts and this morning was cold and crispy. 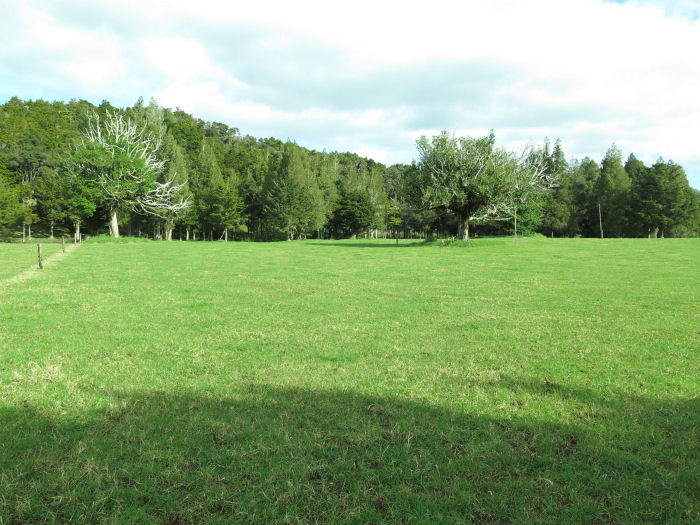 Sunny days without rain create hope of a non-squishy world.  Mushroom 2 is much firmer under foot than its neighbour to the left, Mushroom 1.  I can't decide whether that's due to how I've grazed MR1, or something about the soil structure and my general management of the paddocks. 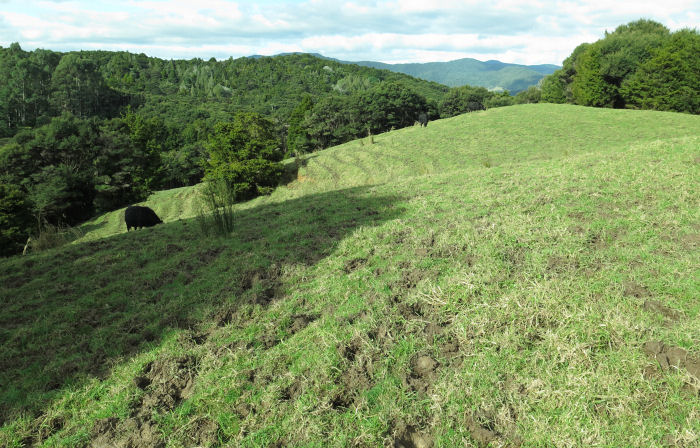 Out the back, along the ridge in the Spring paddock, the mud is deep and soft.  You'd think the water would drain from such high points but it never does; it sits in the soil and makes everything soft. 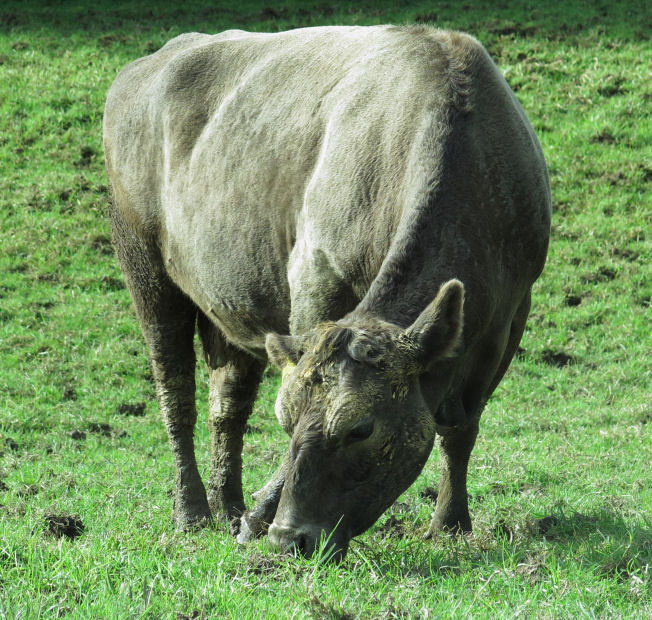 Some of the cows are looking good still, members of families I've selected because they are reasonably easy to maintain in good winter condition.

Grey 607 wasn't always like that but with care in her earlier years she has become so.  Born in the horrendous 2008 season (so much wetter and more awful than this year), she and her cohort had a pretty stressful start. 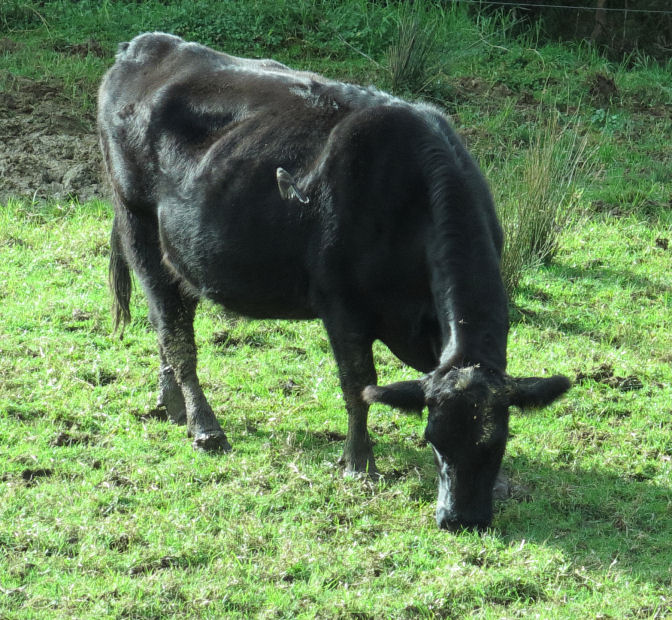 Queenly 107 is at the other end of the spectrum and has apparently lost quite a bit of body condition in recent weeks.  She is always a bit of a thin cow, tall and rangy, rather than solid.  She's been on and off the cull list a couple of times, redeeming herself when a daughter looked better-than-expected, or when there was enough room still in the winter herd for her to stay - and there haven't been any absolute reasons to cull her.

The change in day length has become obvious now, still light enough at 6pm to be out doing things when, on the shortest days, dark was falling at around 5.45pm.  It's not as extreme a difference as in other parts of the world but if you work outside, it's very noticeable as the seasons change.  Cold though!  Seven degrees or thereabouts this evening, dropping to near two degrees in the early hours. 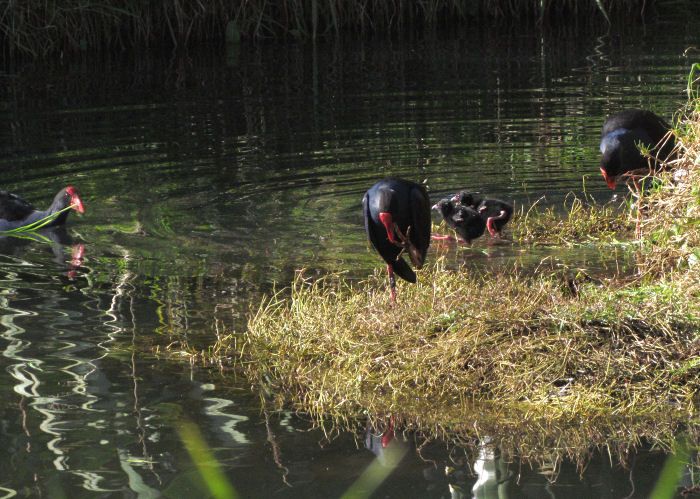 I like watching Pukeko families.  The adults are so actively caring of the chicks - although not those two in this picture.  The swimming adult was repeatedly bringing bits of fresh grass back to feed to the chicks. 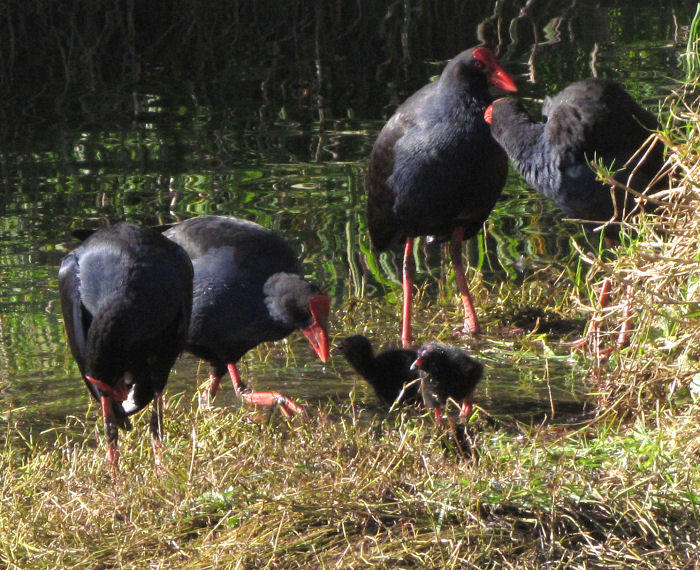 Despite all this wonderful familial care, one of the chicks disappeared about a week later.  It's hard to imagine a predator having the opportunity to snatch a chick from within the watch of five adults.  Hawks and ground predators are chased away with lots of alarmed squawking and flapping about.  But a sneaky stoat might grab a chick who'd wandered out a bit far from the adults, or an eel in the pond (they're really "sun fish" children, don't be frightened) could have grabbed a chick from below as it crossed to or from the island.

My weather spreadsheet tells me that we've had about 80mm more rain than the average for July, about 30% more than usual and the average temperature was about a degree below the long-term average.  It has certainly felt colder and wetter, although it's not the coldest or the wettest July we've ever had.

Tuesday the 1st of August 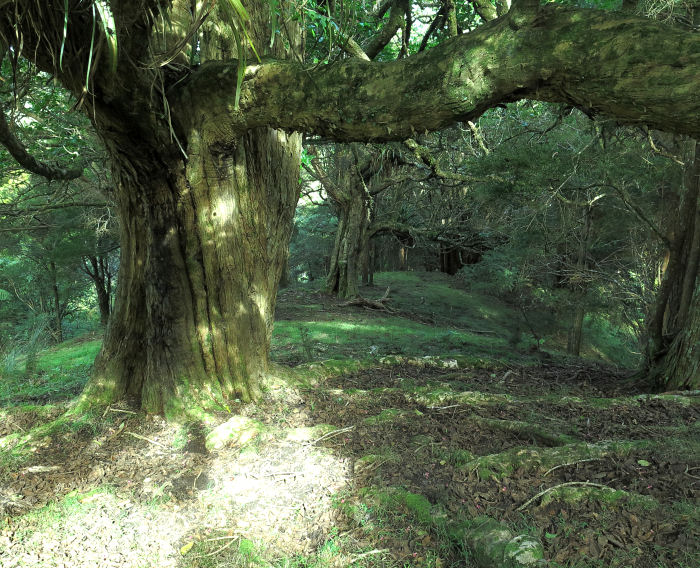 I try to walk in winter, rather than ride everywhere; it's good for the brain at a depressing time of year.  Today I did a circuit around the back of the farm, meeting up with Stephan along the way, where he was working in the Big Back North.

We walked up the side of the gully he was clearing, working out where a fence should go.  Near the top of the ridge (here looking down from a few metres below the farm's East-West ridge between the Big Back and the PW, near the back of our big Pine trees) grow three big Puriri, whose roots snake out across the ground all around - they would be much less obvious without cattle movement through this area and that's what we want to protect them from with the planned fencing.  We need to work out how to incorporate these trees into the fenced gully area. 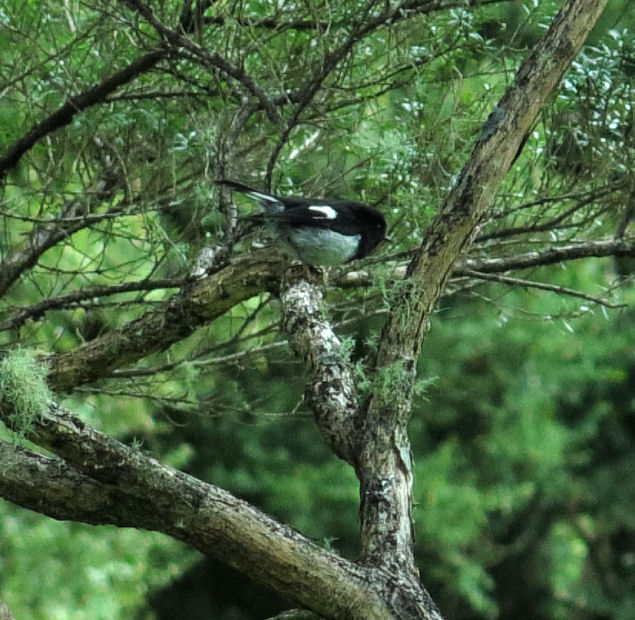 I walked up over the ridge and down through the Middle Back, on my way to call the cows through from the Spring paddock.

Tomtits are cool little birds.  I usually see at least one or two out here when walking around and their song is easily identifiable from many directions.

I find them really hard to photograph, since they usually move away just as I get the camera out.  This one stayed on the branches near me for a bit longer than usual.  I didn't see his partner - generally there's a female there in the trees too, but she's often a bit further off and being grey and green, is quite hard to see. 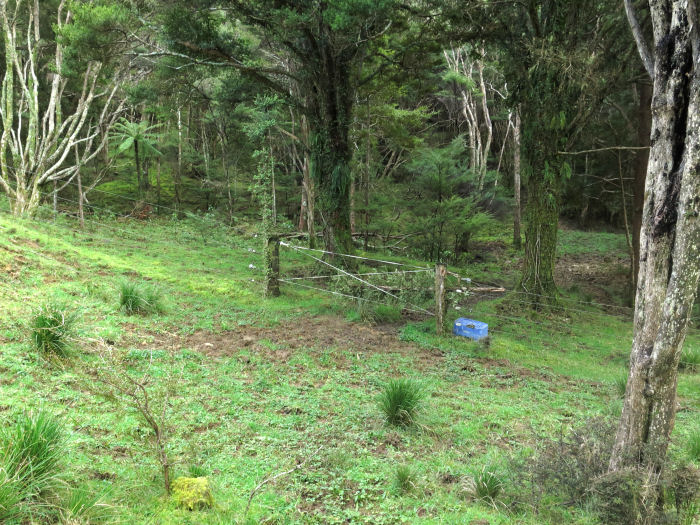 One of the Rata vine-covered pillars of the pretty gateway between the Middle Back and Spring paddocks has fallen down!

The new electric fence energizer pumps out a significant shock, even right out the back here, so I had to steel myself against the regular shocks as I wrestled the broken pole around (the wire kept touching the wood, hence the shocks to me) and prop it up against the gatepost so the cows would be able to pass beneath the wire.

Stephan came out later and took it all out of the way, since the fence on the left can now be energized from the top of the hill.  When this arch-way arrangement went in, he hadn't yet put a hot-wire around the back boundary. 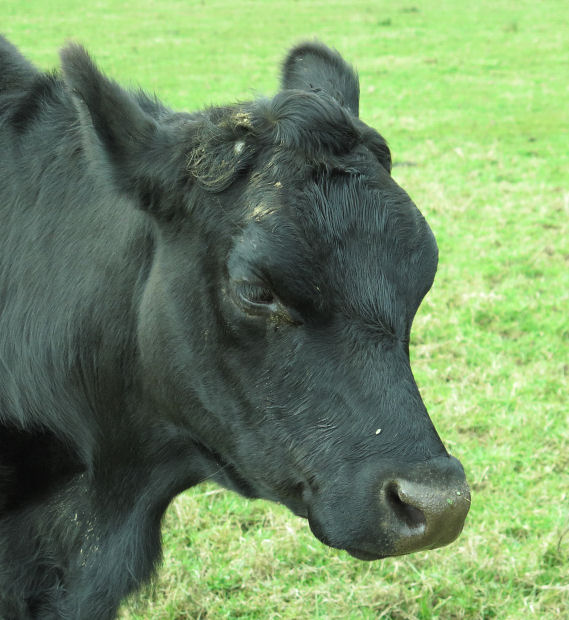 Jet 777 has scurs.  I've been looking out for them, since she has suspicious-looking hair-covered knobbles on her head and her mother has scurs.  They occur in animals which carry a horn gene (polled - without horns - is the dominant trait), although the scur gene is on a separate chromosome.  Animals that are homozygous polled (carry two polled genes, so no horned gene) can carry the scur gene but will not grow them.  Most Angus breeders like to think their cattle don't carry the scur gene but there's probably more of it about than they're aware.  A heifer needs the gene from both parents for them to grow, so Jet proves her sire carries it and he's pedigree Angus.  Male cattle only need one copy of the scur gene to grow them but must also carry the horn gene, which a pedigree bull won't; thus Mr 87 is smooth polled but I now know his secret!  He presumably only carries one copy, or otherwise many more of his sons would have scurs and that's not been my observation.  Or most of my cattle no longer carry a horn gene, which is also now possible after several generations of Angus breeding.

I had previously been somewhat suspicious that the appearance of scurs on two hypotrichosis-affected cows (Fuzzy, I think, and grey 607) may have been connected to that condition, but scurs on this normal-haired daughter suggest they were just normal scurs. 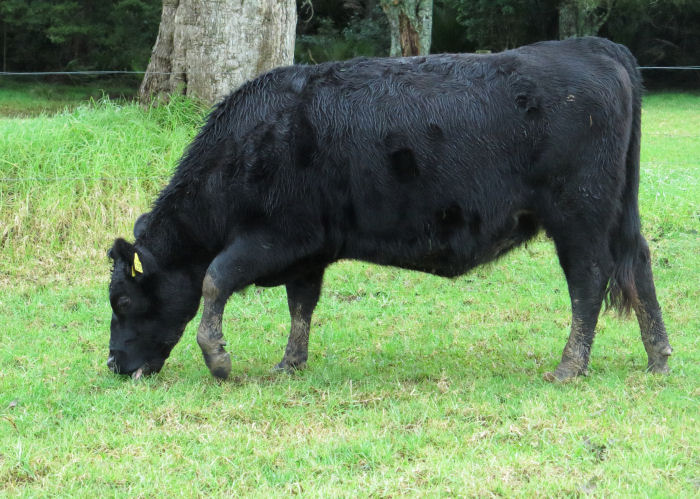 Imogen 155 still strikes me as an utterly beautiful animal.  Her udder is developing and she's going to be like her mother and grandmother with white in that area.

I've been going through long-lost boxes of stuff I haven't seen for twenty years, tossing stuff it really isn't necessary to keep any more and finding reminders of all sorts of things I'd forgotten.  Here is the invoice for my first computer, a 286, bought in January 1991.

My current printer cost me one tenth the price of this first one.  And look at that enormous hard drive: 40 megabytes!  It would be too small to store more than two of the photo files from my current camera. 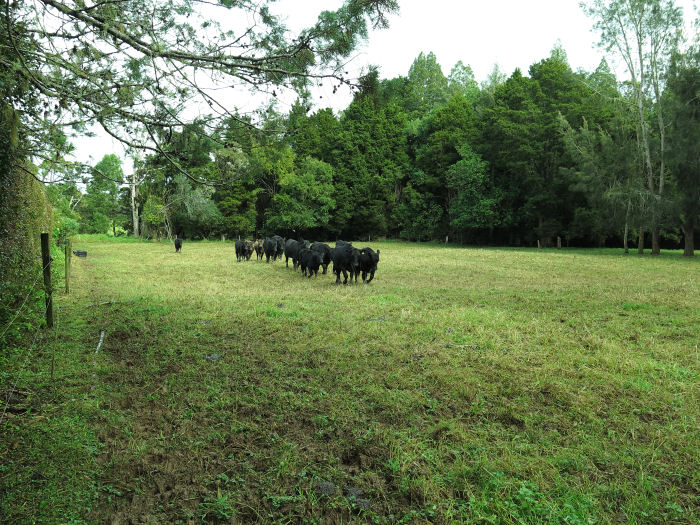 The young mob, coming out of Jane's far paddock.

Some of them were looking a bit thin last week, so I got them in on Wednesday last, when it was nice and fine all day, weighed most of them and put a pour-on drench on the yearlings.  They, like everyone else, have not been getting quite as much feed as I'd planned.  Now it's August, we always end up in a 'holding' situation, eking everyone through a few weeks of little grass-growth.  Knocking out most of their currently resident internal parasites seems a good idea, to reduce some of the inevitable stress of this winter. 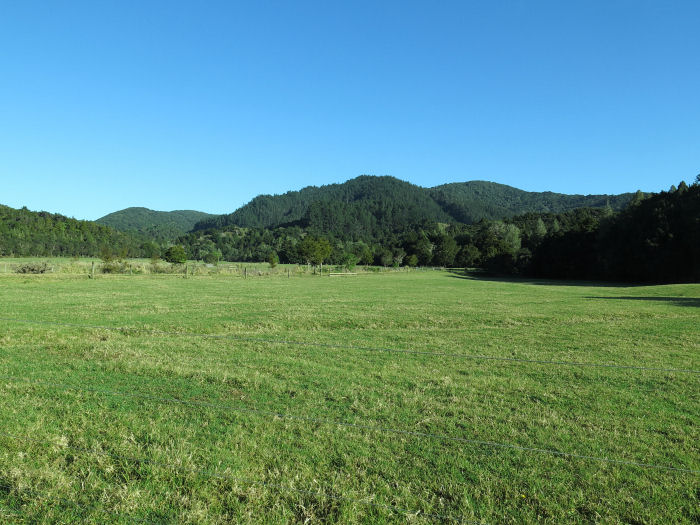 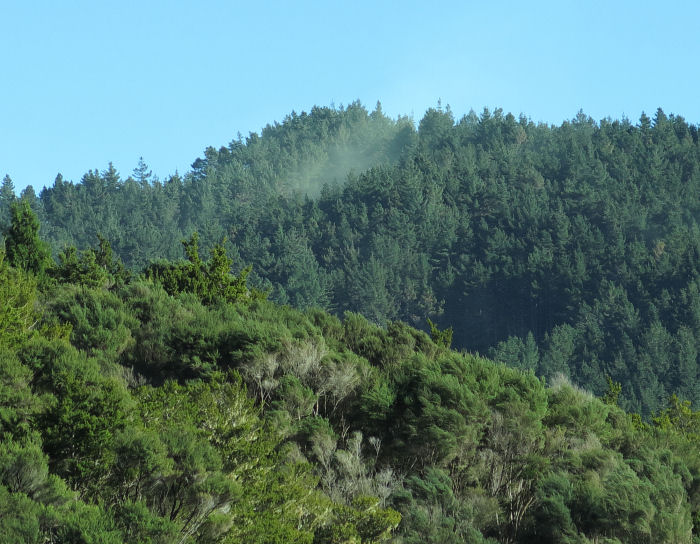 We were moving some cattle and I looked up to see the smoky drift of Pine pollen from the trees behind the farm.  There has been pollen on the trough water for the last couple of weeks and in the last few days it has been settling thickly on the ute's paintwork.  No wonder allergic people are sneezing. 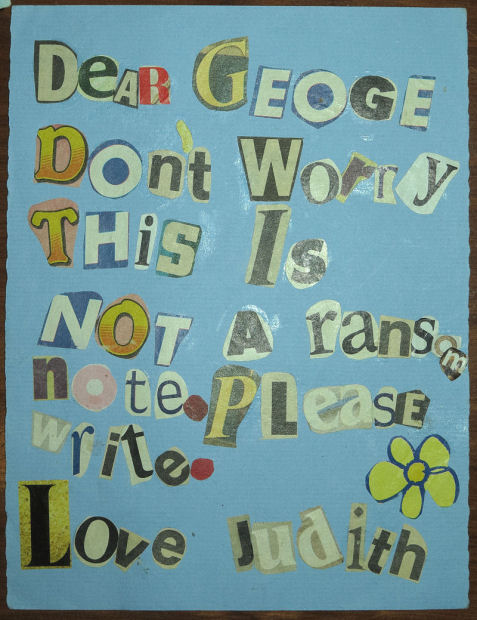 Anther something out of a box.  Jude and I called each other George for a while when she was about eight or nine, for some long-forgotten reason.  Jude couldn't spell it reliably.  I would have been living in Auckland by then and must have been a poor correspondent.

I also found a nearly-50-year-old card from my second birthday.  It was from some people named Tanya, Adrienne and Martin.  From a photo of the party, I'd guess Adrienne (or Tanya) was about my age and Martin was still a spoon-fed baby.  I can't ask my mother who they were; do you know a family with those names?