We went out for a day-long te reo gathering as part of our course and didn't get home until after dark! 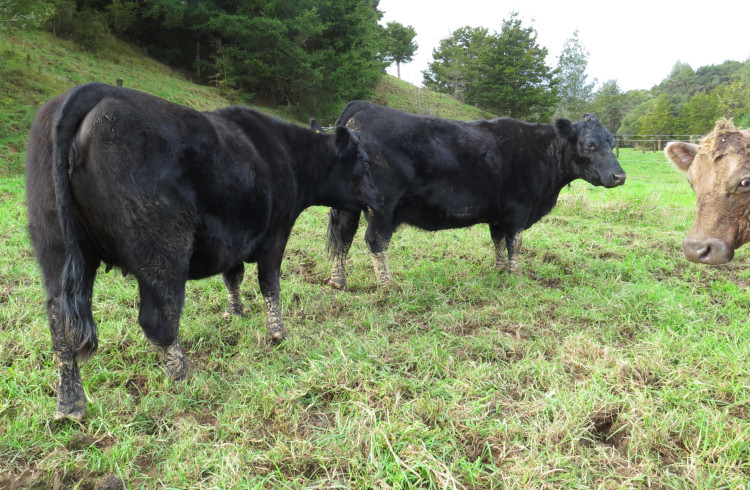 Fat-bottomed 813 is our best-conditioned heifer, standing here with her mother, 613.  Endberly is looking sideways at us from the right. 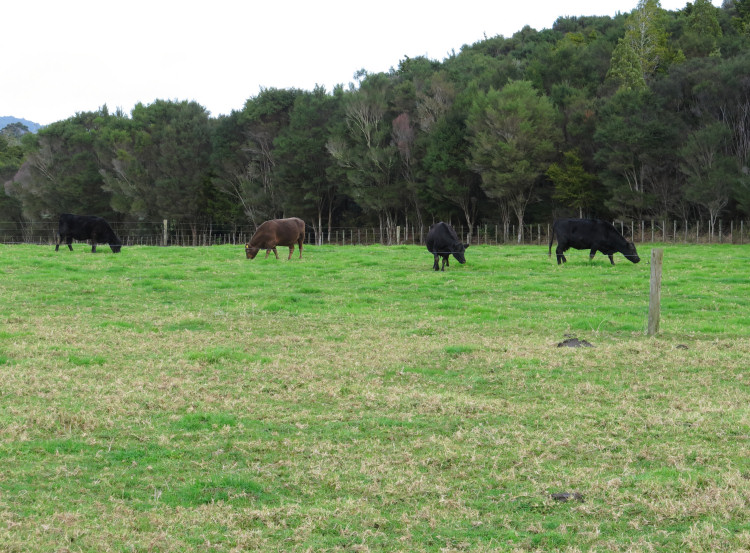 I moved the house-cow mob from this paddock in the foreground, 5d, to 5c, which is significantly greener.

I do my best to estimate the amount of grass there is to eat and when they need to be moved.  I created a spreadsheet a few years ago to assist my calculations and also use visual cues.  If I get it horribly wrong, it takes about six weeks to show in the cattle, and just as long to feed them well enough to catch up again, if there's enough grass available.

There's another little bit of Scaup video here: swimming across the pond.

Out to dinner this evening with our nice newest neighbours, Hera and Hugh, in whose garden Stephan had been working on the new fence.  They're having a great time renovating and tidying up and making the house and garden the way they wish. 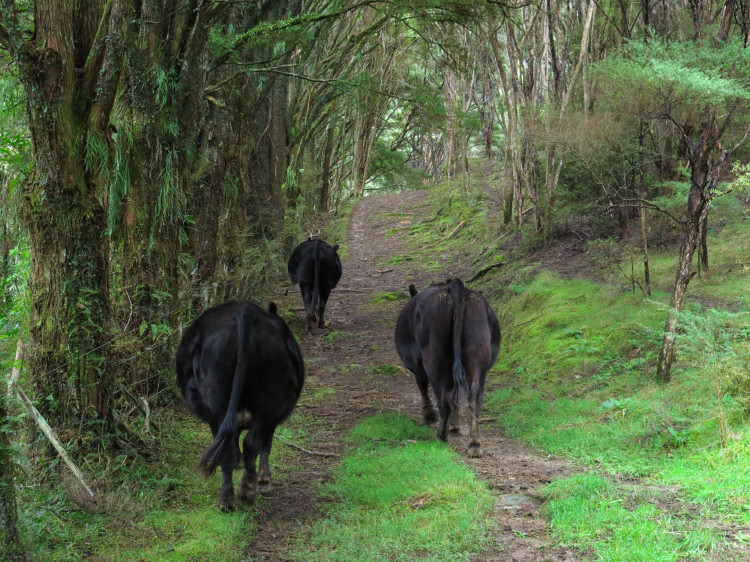 Yesterday I walked around here to open the gate between the Spring and Middle Back for the young mob, of whom I heard and saw nothing.

This afternoon I went to check that they were all happy in the Middle Back but found the three R4 heifers still grazing together at the bottom of the Spring.  I called them to follow me in the right direction, then followed them through to the Middle Back, shut the gate and went to check on everyone there.

I wasn't entirely surprised to find these three apart from the others, they having only recently joined the youngsters. 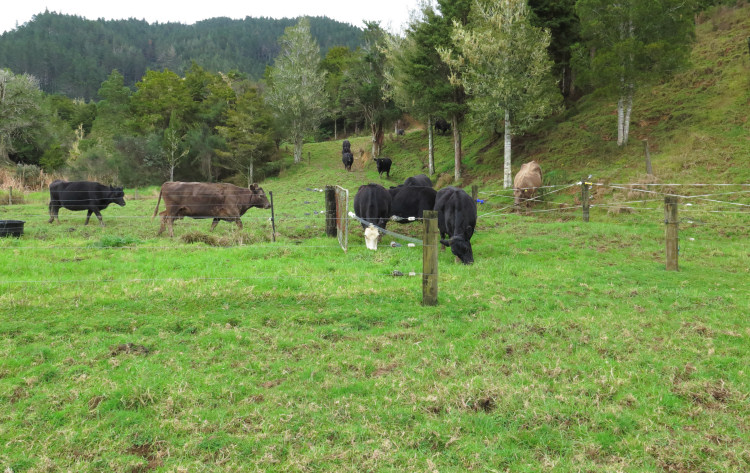 Around the other side of the farm I opened the gates for the 19 cows I could see, to come out of the Big Back North and into the Bush Flat, then walked around them to work out who was missing.  By the time I finished checking, the 20th cow had appeared but not unusually, Ellie 119 wasn't there.

I shut the Bush Flat, leaving the Big Back open to the lane and along to the stream, so whenever Ellie turned up she'd have feed and water and be easily found by Stephan tomorrow.

I flew to Auckland on the early plane (its departure delayed a little because of fog around Auckland Airport), in preparation for a Veterinary Complaints Committee interview tomorrow.

I found Jude and friends, and then Roger too, in the café just up the road from their house.

Later, using the Auckland Transport app, I figured out how to get from Jude's to an appointment in Gillies Avenue on the buses.  The app showed it would be beautifully straight-forward, with a smooth connection between the first and second buses ... except the first bus up Jude's road was several minutes late and the second bus went sailing around the corner just as I got off the first to walk to the connecting bus-stop.  I hadn't made a contingency plan!  But for some reason my phone (no data, no plan, no money on it) was showing me some information about other bus routes and I hopped on the next passing bus, which took me near enough to walk quickly along a short street to my appointment, just in time.

The doctor seemed increasingly familiar and may have been one I met several years ago when investigating my weird muscle disorder, symptoms then apparently brought on by toxicity suffered during my engagement as a school Science Technician.  His job today was to check the nerve conduction in my left arm, with which I have had problems since a botched physiotherapy treatment eighteen months ago.  He gave me a series of electric shocks, which felt a lot less nasty than accidentally touching the electric fence and then said he was going to stick needles into my arm to test something in my muscles and it was at that point that I mentioned the Myotonia, which was diagnosed previously.  He said he was probably the doctor I saw then at Auckland Hospital and was very excited to have a patient with the peculiar muscular response to his prodding - which was a great deal more unpleasant than the shocks, despite his assurances!

He said he'd like to prod my leg too, if I wouldn't mind, just for interest's sake.  My calf muscles gave a very good reading of the abnormal muscle signals.  Myotonia Congenita is listed as a rare disease; possibly one of my parents had it, although neither ever appeared to have muscle issues, or it is the recessive type and I inherited the defective gene from both of them.  It rarely bothers me these days unless I'm cold and stressed, or cold and tired, or stressed and tired; or all three and then I certainly notice it.  It definitely affects me when being borne down upon by animals and is part of the freezing response I mentioned a week or two ago.  I'd forgotten this was part of that.  The constant symptoms had receded as my body recovered from whatever chemical toxicity had initially brought them on back in 2001.

I read that this condition occurs in around one in ten thousand people, world-wide.  I didn't think to ask the doctor how often he's come across it himself.  If any of the other theoretical 47 people in Aotearoa would like to be in touch, we could compare notes.

In the evening, Stephan's elder brother, Richard, died.  While we all knew this was on the cards in the next few months, tonight was unexpectedly sudden.

Again the bus system let me down: the bus I expected to catch because the Auckland Transport system said it was coming, then vanished from said system and no bus arrived.  Roger was getting ready to go out for the day and I watched as he backed out of their driveway and I stuck my thumb out for a lift.

Then to Newmarket to meet the others in my committee for some lunch before the afternoon meeting.

Just after 4.30 I caught a bus back to Ponsonby Road where I got off opposite the Women's Bookshop.  I still had some money left on a book voucher Jorja gave me last year and the women of the Auckland organising committee of the Women's Studies Association sent me another voucher in a lovely card when I was recovering from surgery.  I caught up with the marvellous Carole Beu, then spent half an hour perusing some very entertaining children's books in English and te reo, before selecting three.

After returning to Jude's for a short time, I was collected by Alison, my WSANZ friend, and taken to a Feminist Knitting Circle at the old Post Office building in Mount Albert, where I used to do my banking when I was a young Telephone Technician at the local exchange in New North Road.  The Post Office is no more and the building is now a bar, with a pizza special on Wednesday nights.  It was a very entertaining and pleasant evening.

During the day, according to his wishes, Stephan and the family present had done what was necessary for Richard before taking him to the crematorium in Kerikeri.  So ends the life of Richard Stanfield Mathew.

Thursday the 1st of August

I appear to have acquired a "personal" taxi driver in Auckland, although it is not an exclusive relationship on his part.  He gave me his card on the way into Auckland on Tuesday and arranged to pick me up again this morning, then texted me his number to arrange any future travel.  Having experienced some appalling driving by, and disturbing conversation with, some of his colleagues, I'll probably take him up on the offer.  He was pleasant, drove well, seemed progressive in his attitudes, had a sense of humour.

The weather on the way home became increasingly unpleasant and we landed sideways at Kaitaia, scaring the young woman across the tiny aisle.  Had I not been rigidly looking out the window myself, I'd have tried to reassure her that we would probably survive.

It's always good to come home. 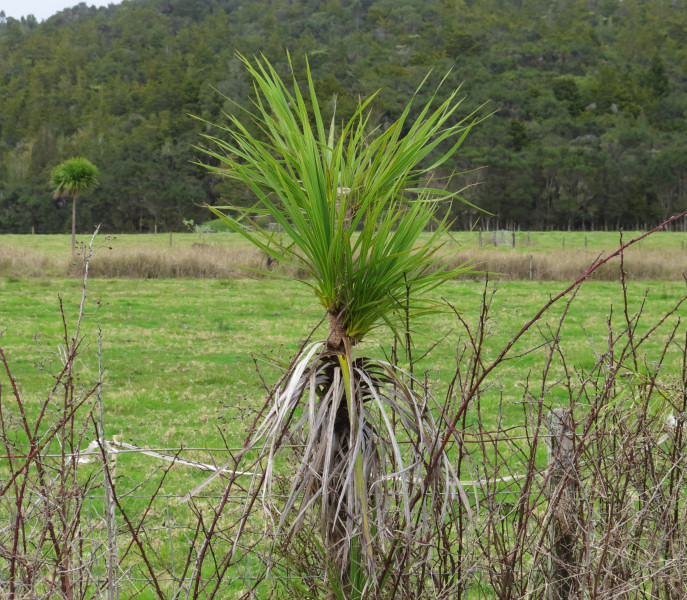 The Tī Kōuka on the Flat 1 fenceline has grown considerably since I last photographed it.

This evening I received an email from the crematorium, telling us that after the cremation on Wednesday, melted glass was found in the crematorium chamber.  Stephan had removed a bottle from the coffin but with the distraction of getting the paperwork sorted, had not checked for and removed anything else.  Glass does not burn, it causes continuing issues for the operators of a crematorium, because it can't be easily removed without causing damage to the chamber.

We have so much appreciated being able to make funeral arrangements without recourse to formal funeral direction services and anything that might cause that relationship to sour would potentially stop us doing that.

NEVER PUT GLASSWARE IN A COFFIN FOR CREMATION!!!