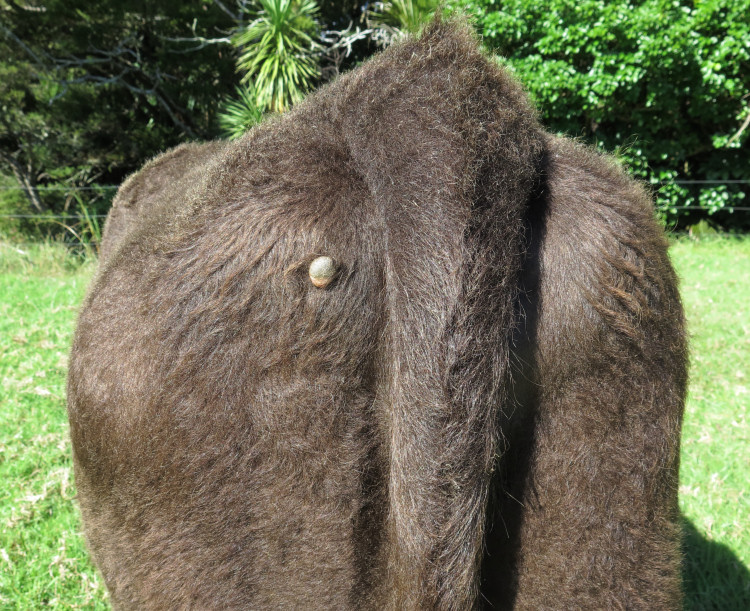 I don't know what this bulbous thing is on 812's rear.  It looks a bit warty but somehow not quite.  It might benefit from some iodine.  When I start carrying some around in my camera-bag bottle again, I'll get some on it and see if that makes any difference.

Iodine often helps to reduce the size of ordinary warts; but so does simply waiting. 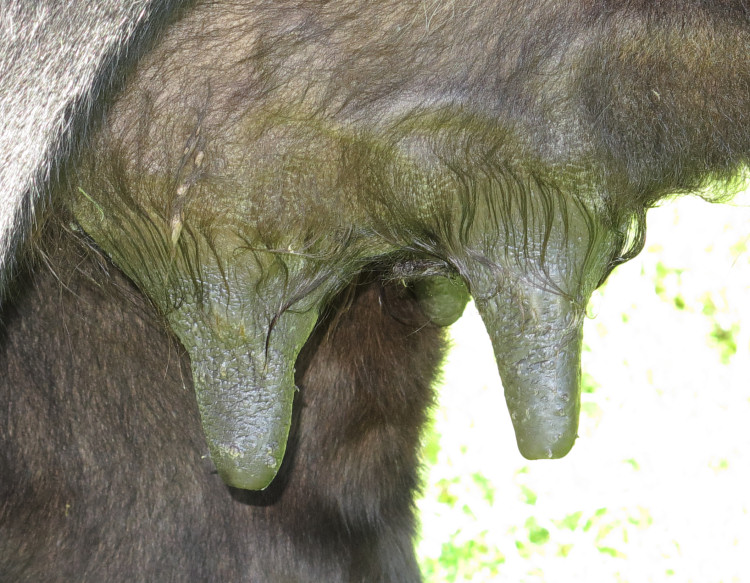 Gem 698's teats are looking far less weird than they were back in December, when they were covered in strange warty lesions. 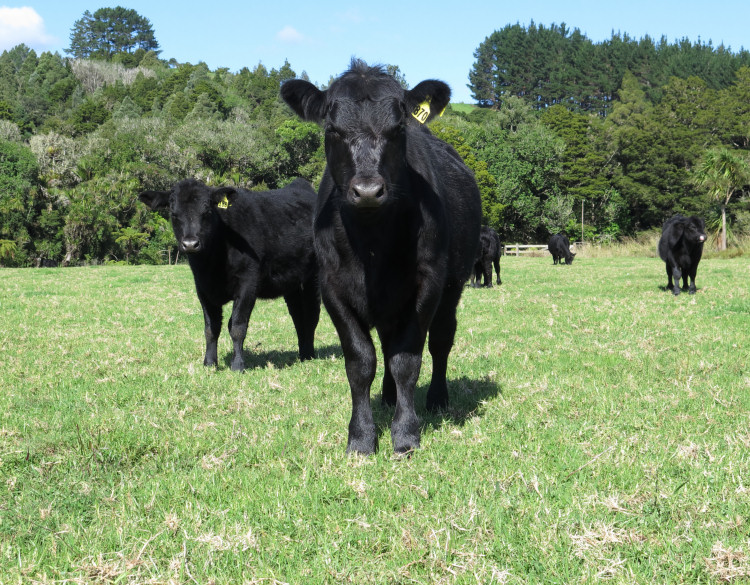 870 kept following me around as I stopped to take photos.  She's gorgeous but a bit nervous, so I've not decided if I'll keep her or not. 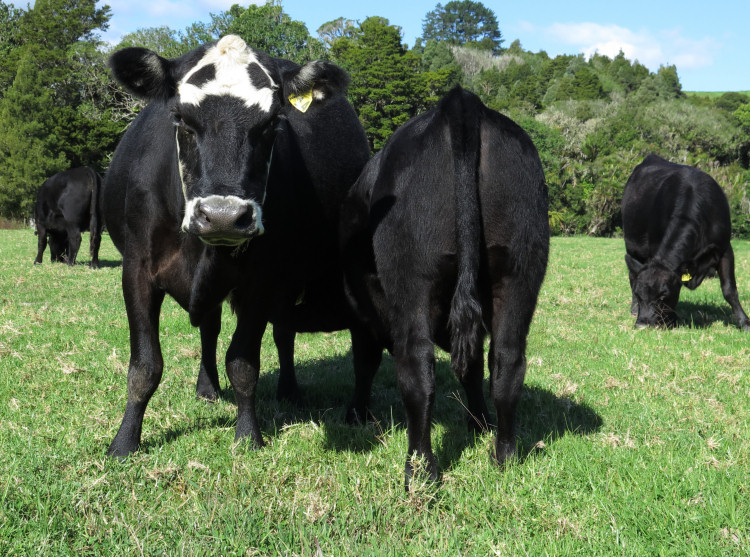 714 is still favouring that right front foot and because she is going to be a late calver in the spring, I've been thinking it might be time for her to go.  Another decision I have yet to firmly make.  Her fat-bottomed daughter, 874, is a definite keeper! 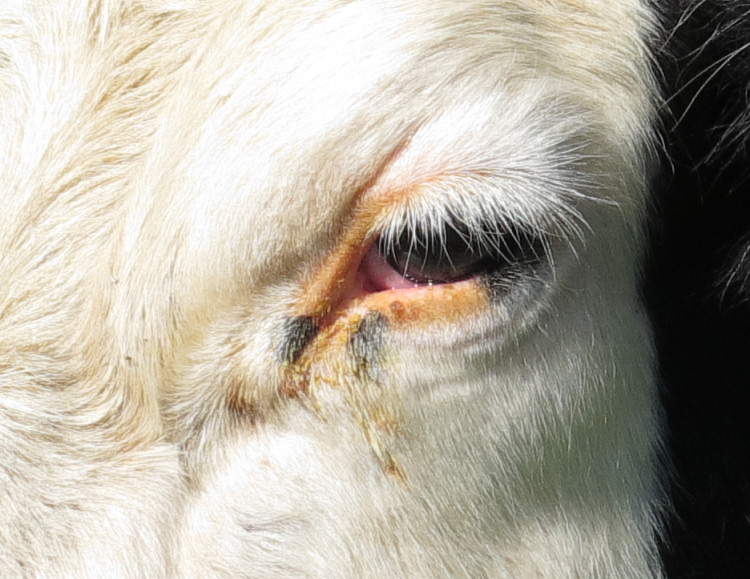 In January I noticed what looked like a growth on 746's lower eyelid, hoping it was actually just gunk.  Seems like that's exactly what it was.  Excellent. 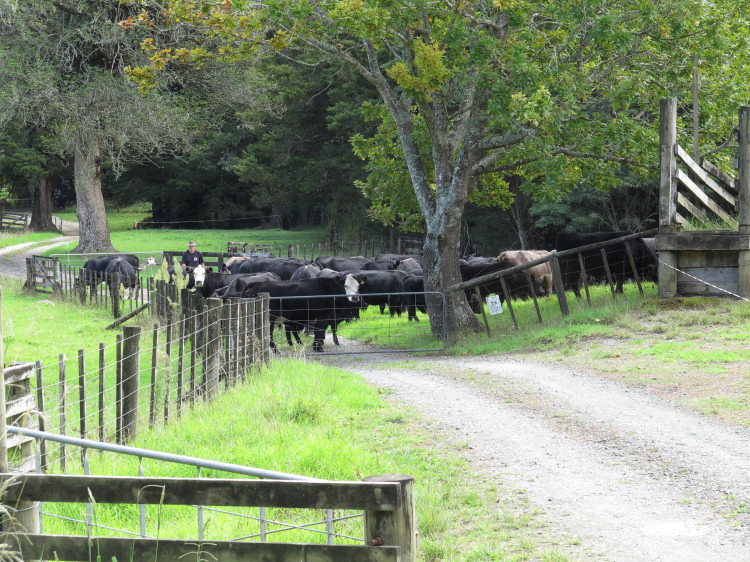 Sandi popped over from next door and when she was ready to leave, we asked if she'd mind helping us move the cattle across the road, since I still can't move very quickly.

Sandi and I walked ahead and set up the gates, while Stephan brought the big mob of cattle from Flat 1 out to the front.

I went for a walk out along the track and the glistening tops of these toadstools in the grass in the House paddock were so shiny they looked like a stray bit of cellophane, so I had to go and have a closer look.

Stephan went for a bush walk with a nice young man from the Department of Conservation this morning, who, as a result of my prompting last year, is planning to get the fencing sorted out around the perimeter of the Buselich Reserve, on our southern boundary.  There's only a small section shared with us that could be replaced (and only as a boundary marker really, since it's inside our Bush Flat reserve, away from the cattle) but the fences on the boundaries everywhere else are in dire need of maintenance or replacement and the fence along the roadside barely exists.  It was disappointing last year to find signs of cattle having been in there, since there should have been none in the last twenty years.

Then we went to town so Stephan could spend some time with our te reo tutor to sort out some aspects of his introductory speech should he need to make one during a marae visit but otherwise for practice during classes.  And then we went for our annual influenza vaccinations.  Both of us avoided being ill all through last year, despite being surrounded during our weekly classes and amongst the wider family, by people sneezing, coughing and being generally horribly unwell.  I don't know how much 'flu there was in that mix but presumably there was a bit floating around and we didn't catch it.

In the late afternoon Ella and Lois arrived, for Ella to stay with us for a couple of weeks, her longest stay yet.  Lois stayed overnight, before going back to Auckland. 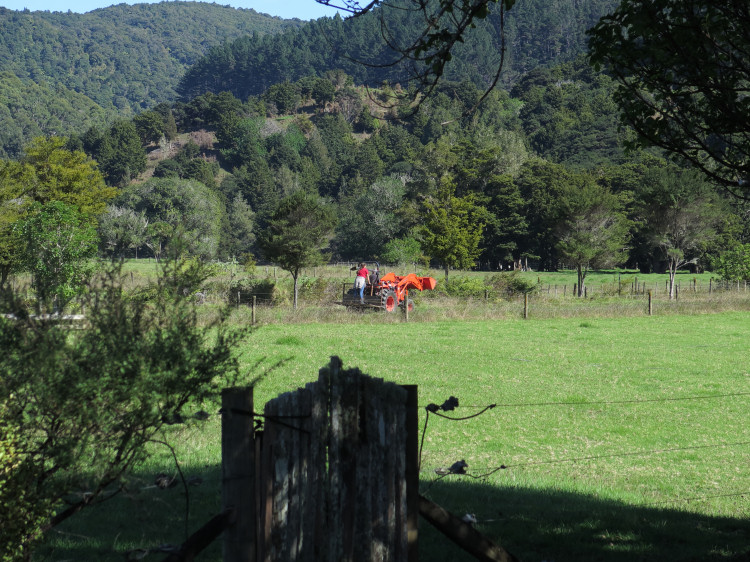 Stephan and Ella, off to work on the boundary fence. 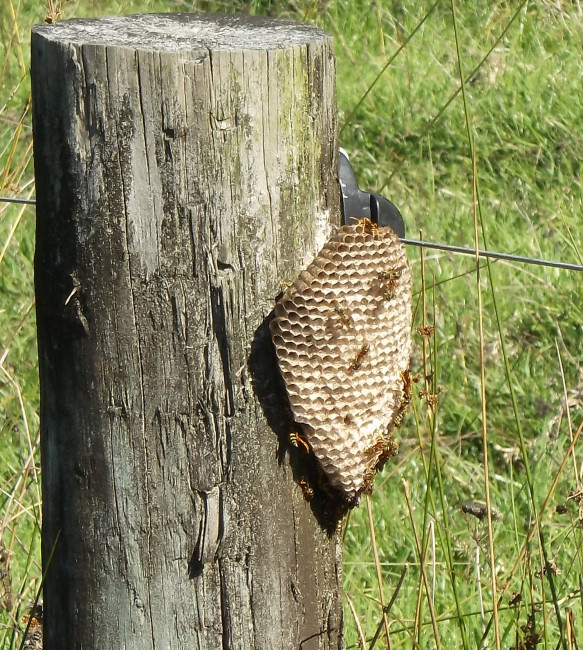 It's autumn wasp time again.  These paper-wasp nests are appearing all around the place and we've already poisoned a big underground nest beside the track. 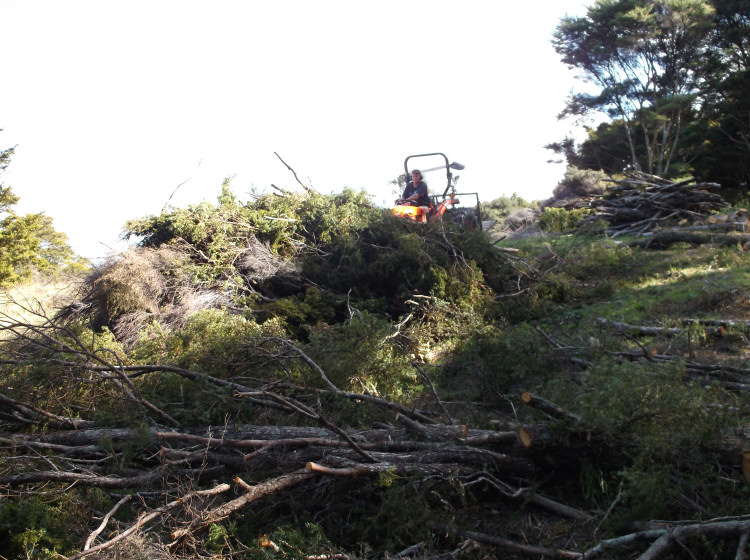 Ella took pictures of Stephan at work, here bulldozing tree-tops into a big pile on the hillside. 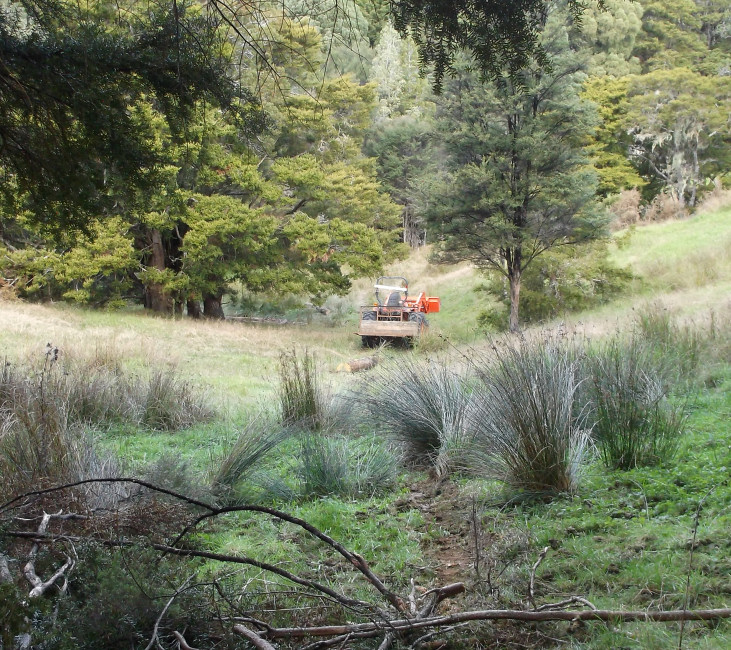 And dragging one of the big Totara logs down to the flat ground at the bottom of the hill. 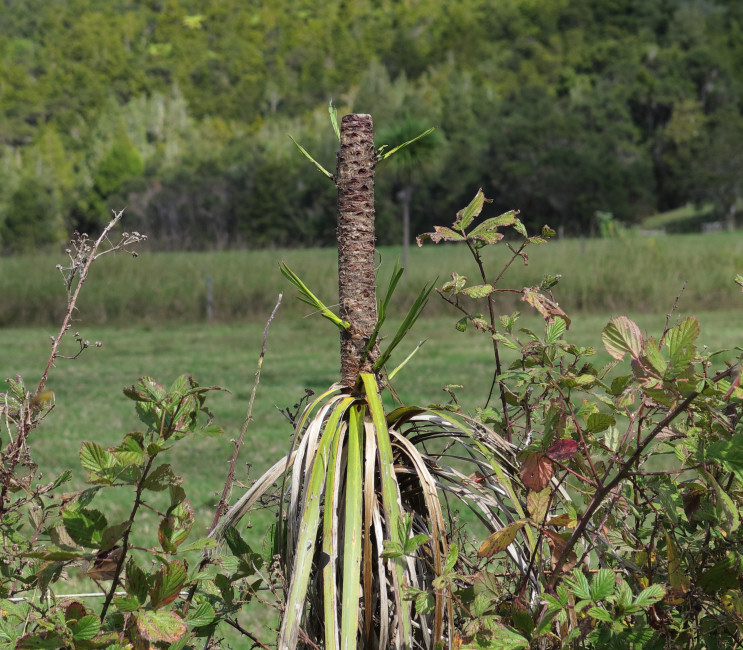 Elizabeth, Jonathan and Char-Lien came out this morning and we walked out to see how Stephan was getting on.

On the way up the track I noticed that the Tī K#333uka Zella beheaded nine weeks ago, along the Flat 1 fenceline, is now sprouting what will eventually become branches - as long as we keep browsing bovines away from it. 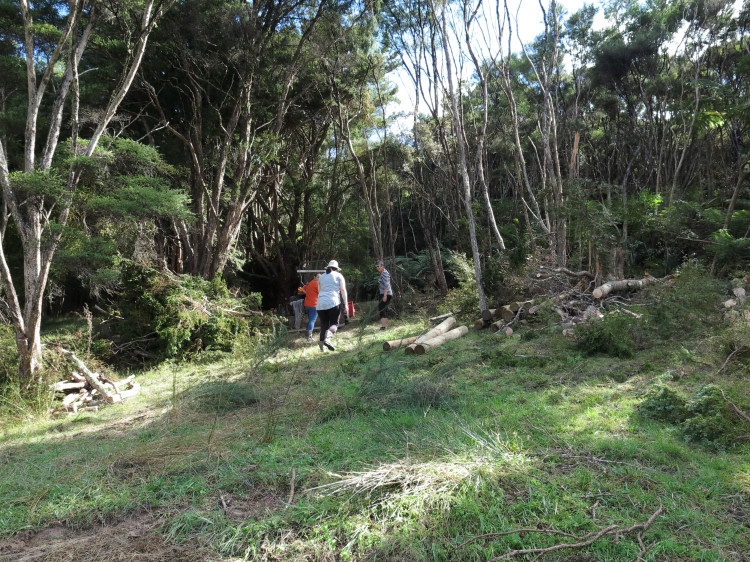 This was my first hill climb since surgery, taking it quite slowly and carefully.  It didn't feel too bad.  Getting better. 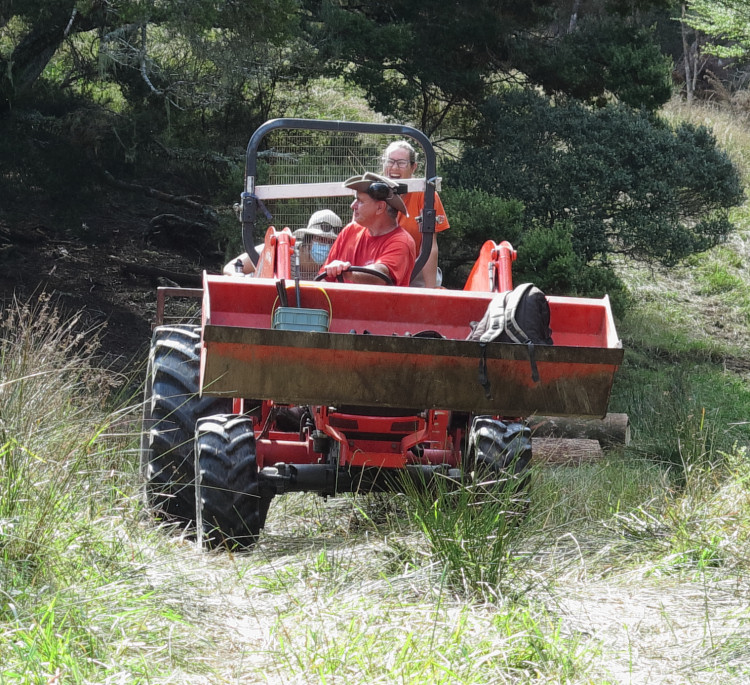 Elizabeth, Jonathan and I walked ahead while Char-Lien and Ella caught a ride down the hill to go back to the house for lunch.

Char-Lien was attempting to avoid being photographed but as she was wearing a mask (to hopefully prevent the spread of her awful cold) and a hat, I doubt anyone will recognise her. 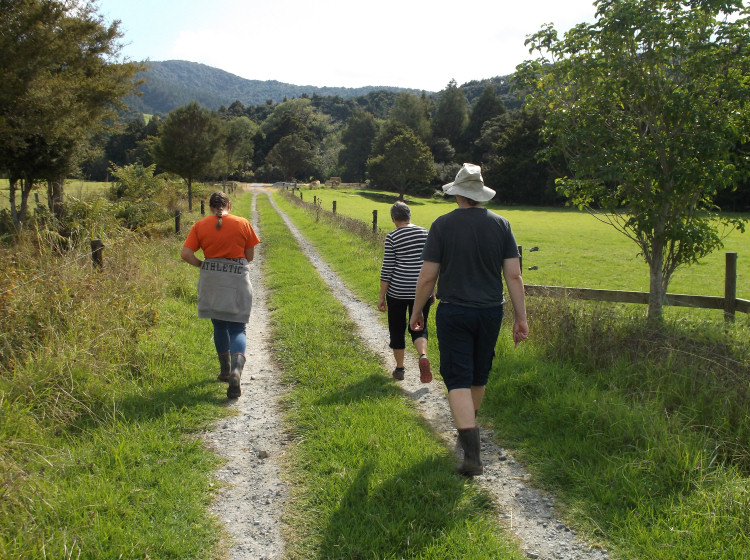 After lunch I rested while the others all went off on another walk, this time to see the first part of the new boundary fence. 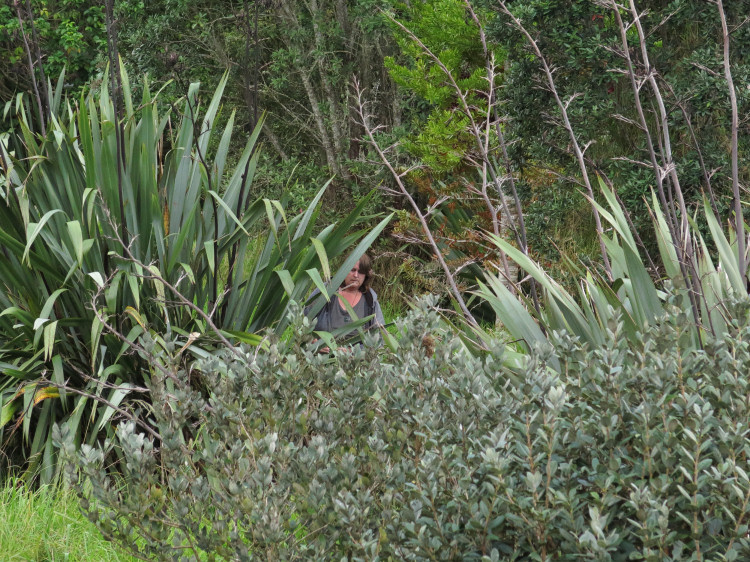 This year, instead of continuing with us on our Te Reo learning path, Christina has opted for another course at Te Wānanga o Aotearoa, learning raranga: weaving with harakeke, flax.

The students on her course are required to harvest their own raw material.  Christina will be able to come here whenever she needs some, since we have cultivated quite a lot of it over the last few years. 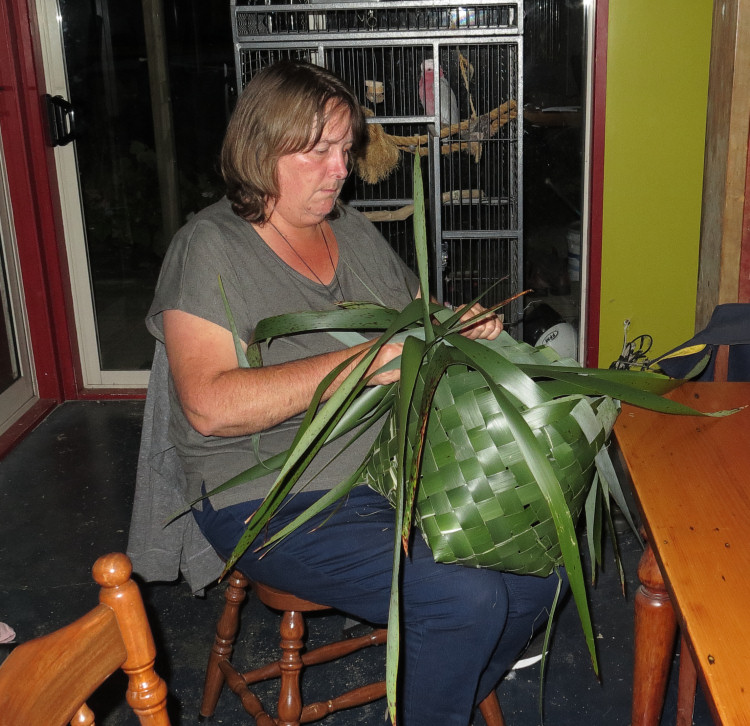 Before we ate dinner together, she used some of her harvest to make us a waikawa, a container traditionally made from green leaves. 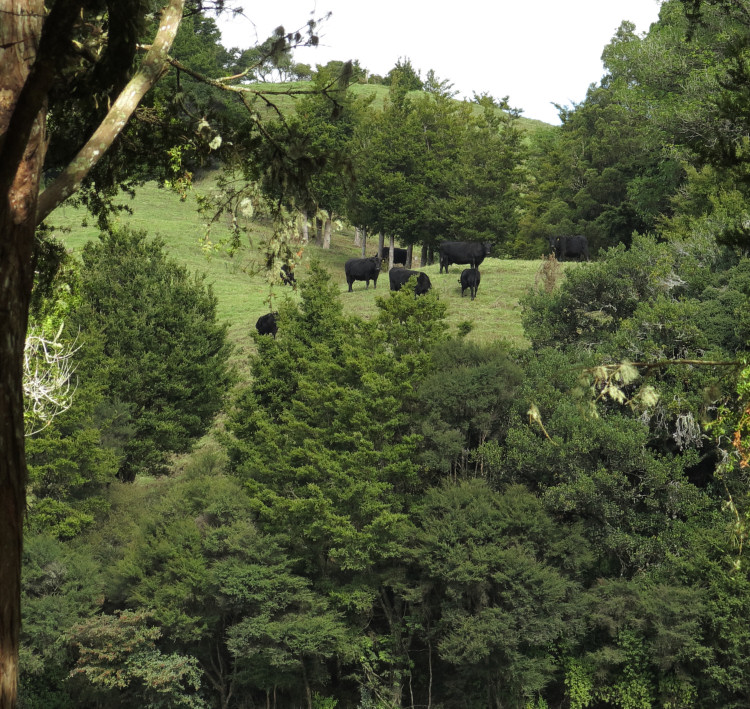 Ella, Stephan and Emma walked up and around the cattle Over the Road last evening and while there appeared to be sufficient grass still, Stephan said he thought they should be moved today. 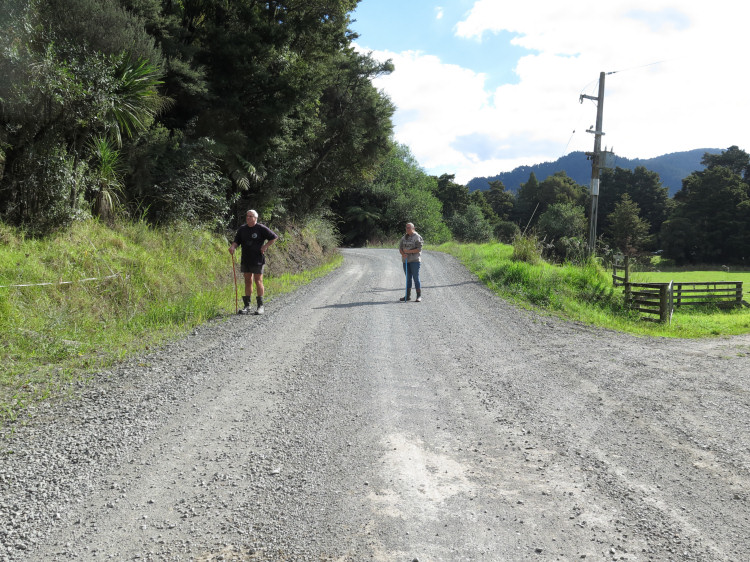 Because the calves are now old enough to be sensible, we opened the gates and called the cattle to come down the hill and across the road as they arrived.

We had differing counts when there were no more animals to be seen or heard up the hill, so Stephan went off to find the last seven (Ella), nine (Stephan) or ten (Ruth), and came back with nine animals.

I should probably keep some chocolate fish for these occasions. 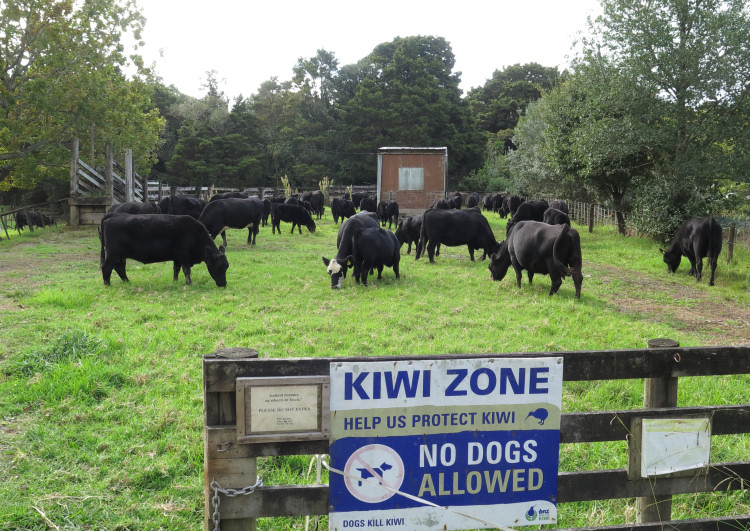 Ella and I stood minding the gates and the road while we waited for that last group to arrive. 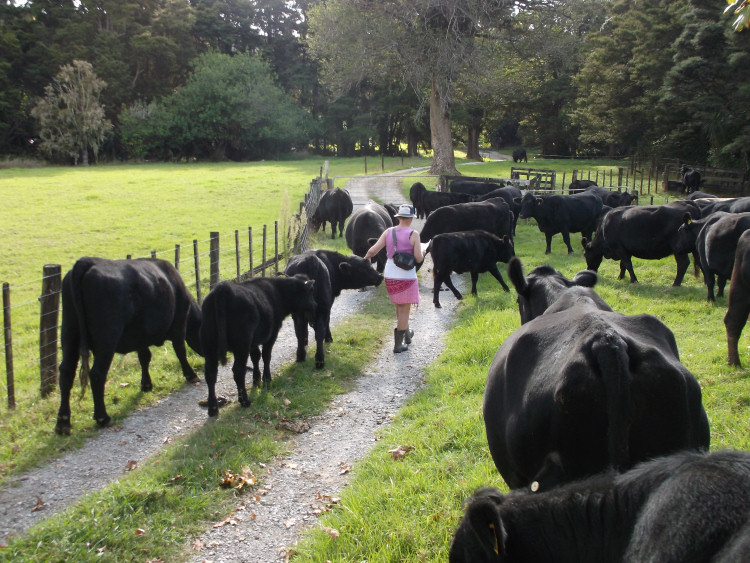 Then I went through them to tick them individually off my list, to make doubly sure we had everyone.

(My current unusual farm attire is worn to avoid abdominal irritation: a soft sarong, so there's no zip or buttons and an elasticised binder over the top to hold me together while I'm upright for a while.)

It looks like I'm battering that poor calf: it was Delight 190, whose face I was scratching as I passed. 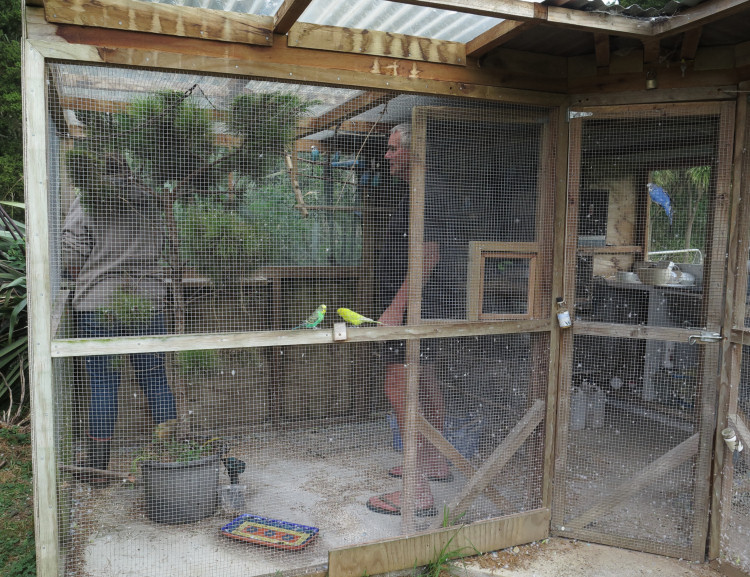 Aviary staff at work: Ella and Stephan spent ages inside the aviary this afternoon, sweeping up all the litter on the floor and then Stephan did some overdue maintenance on the feeding shelves, some of the screws having come adrift.

Stephan always adopts that weird, bent-legged posture in the aviary, having cracked his head too many times on the beams.