The week beginning the 9th of February 2019.
Saturday the 9th 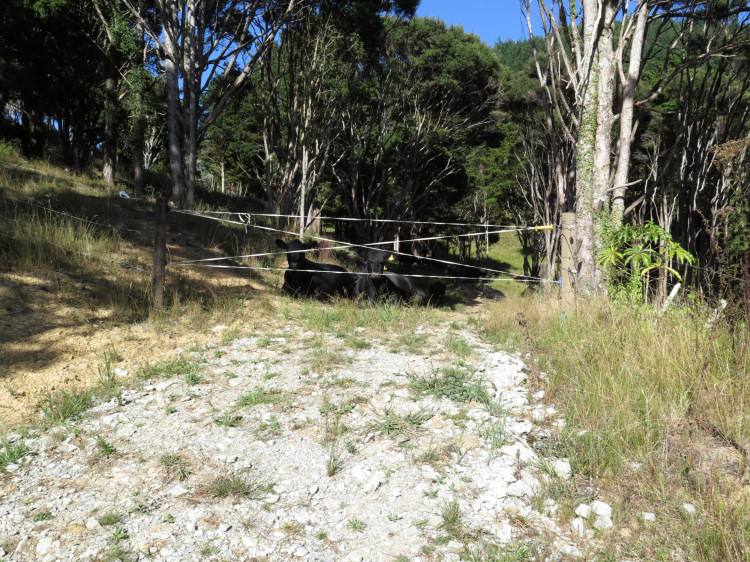 Everyone was quietly sitting or standing around in the Middle Back this morning, including Eva, who was nowhere near the bull.  Good.

The other bit of excellent non-action was in Dushi 170, who has had no mucous in the last few days and today, her potential 21-day return to oestrus, she remains entirely calm and mucous-free.  Hers was the second presumed-unsuccessful heifer insemination, on 19 January, about which I had felt very disappointed.  But again, as in Zoom's case, I must have put enough of the magic drop close enough to where it needed to be. 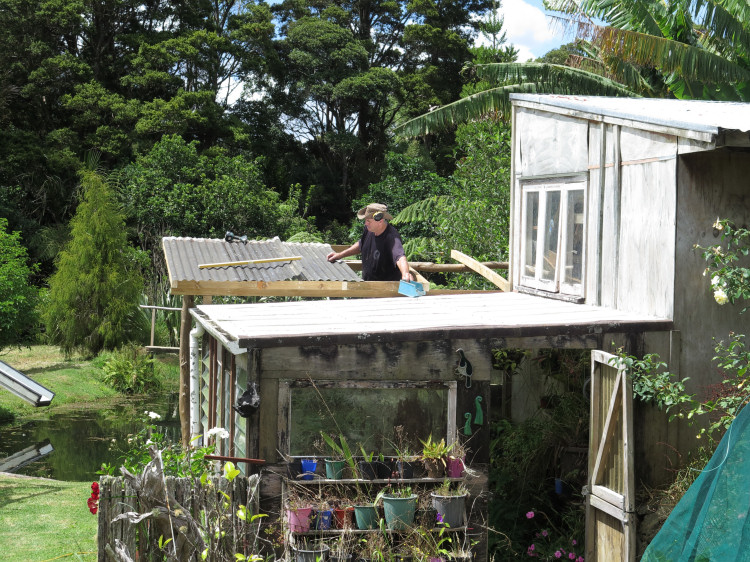 Ugly but practical - no, not Stephan, the roof.

As there was a barbecue planned but also some rain forecast, Stephan thought he'd better get some cover installed over the barbecue deck.  Hopefully it may be made slightly less unattractive by some clever or decorative means. 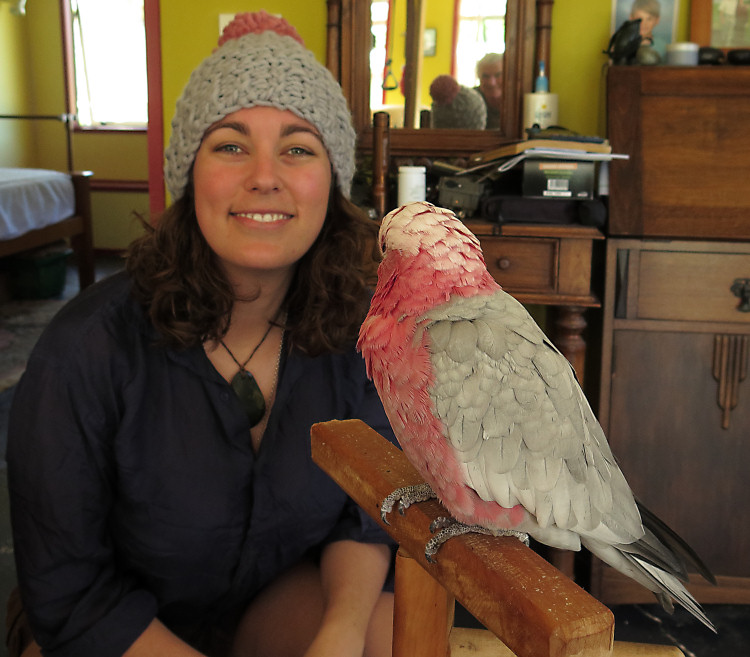 Amanda and her boyfriend, Dónal, arrived yesterday, went out to a party and snuck in almost without us noticing just before midnight last night.

After coffee and the entertainment of watching Amanda make the pompom for this Floss-matching hat, our previous guests, Cathie and Andrew departed for home.  Then the remaining four of us went out for a walk as far as the new fence-line.  Amanda hadn't been out on the farm for ages. 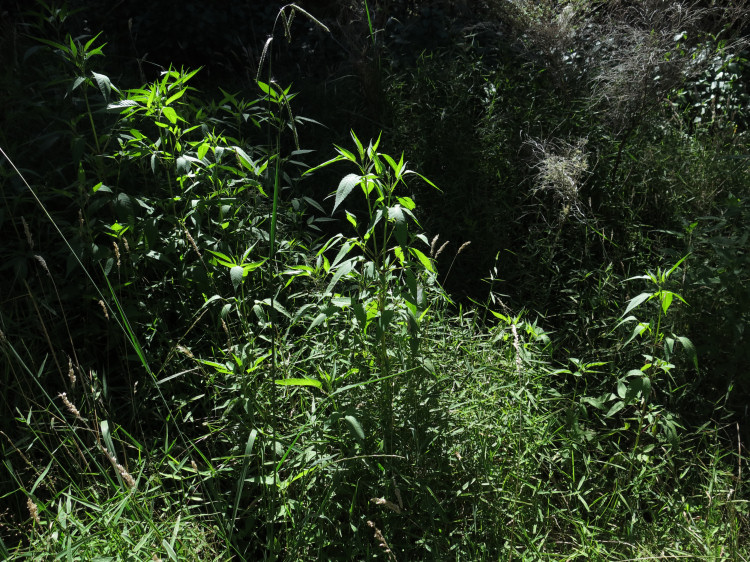 Beggar's Tick plants show up in various places around the farm and we keep trying to eliminate them.  These are between the Middle Back and Spring paddocks, in a swampy bit of ground.  The seeds would have come here on the cows' coats at some time.  I haven't seen them here before.

They're easy enough to pull out, so I did.  Stephan will have to come back and check, possibly with the back-pack sprayer to get the plants it's hard to see if they're too small - those ones still seed just as well as the big ones. 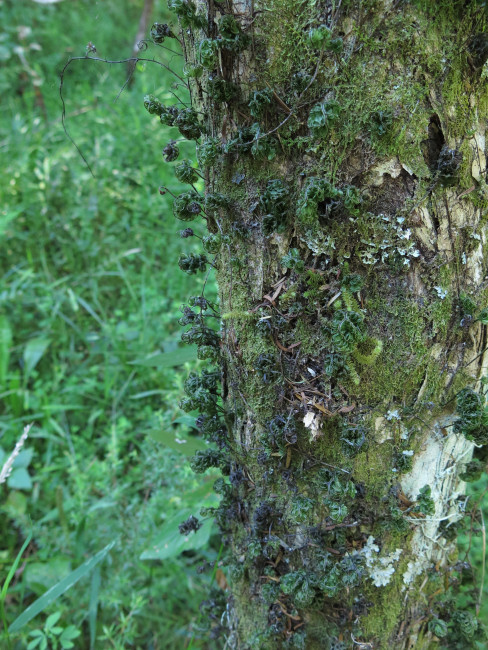 The duration of the hot dry weather is evidenced by the state of these desiccated filmy ferns on a tree trunk in the shade.

Lots of ferns and mosses are drying out very noticeably. 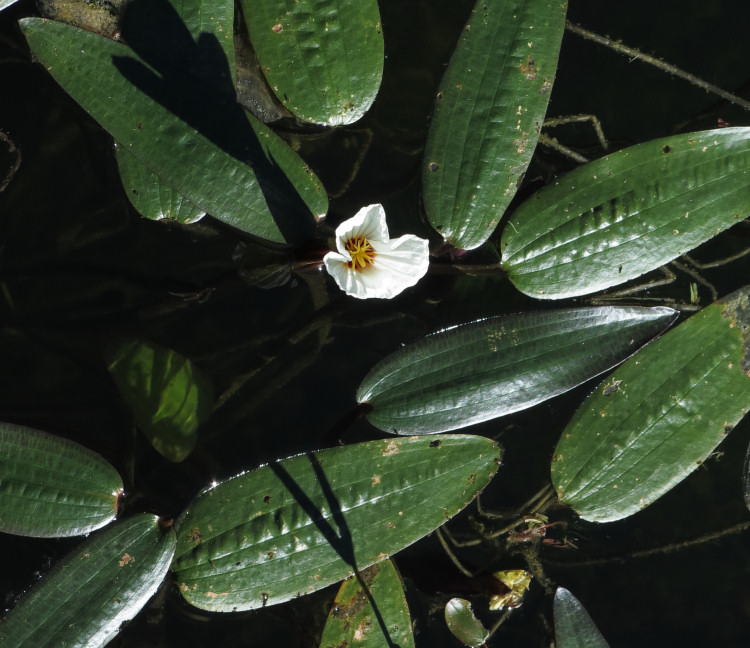 There are so many Ottelia ovalifolia (Swamp Lily) plants in the pond it's taking quite a lot of determination to pull them all out, since someone has to dive down to their roots to extract them effectively.  They can't be pulled from above or the stems just break off, leaving the shorter leaves and flowers still growing from the base, which remains rooted in the mud. 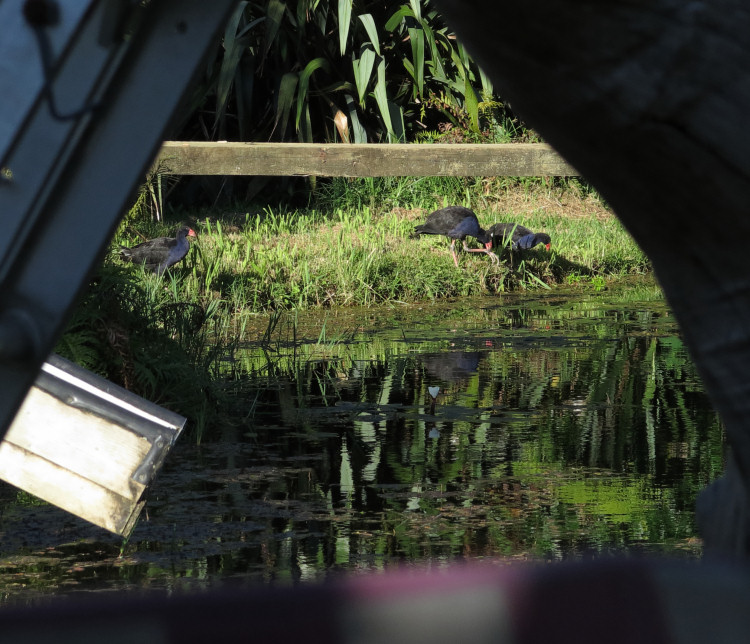 As I sat quietly reading beside the pond, the Pukeko family returned to their usual evening activities at the water's edge.

Mathew came out today to help Stephan with more fenceline clearing.  The assistance and company of family and friends on this large job is very much appreciated by us both. 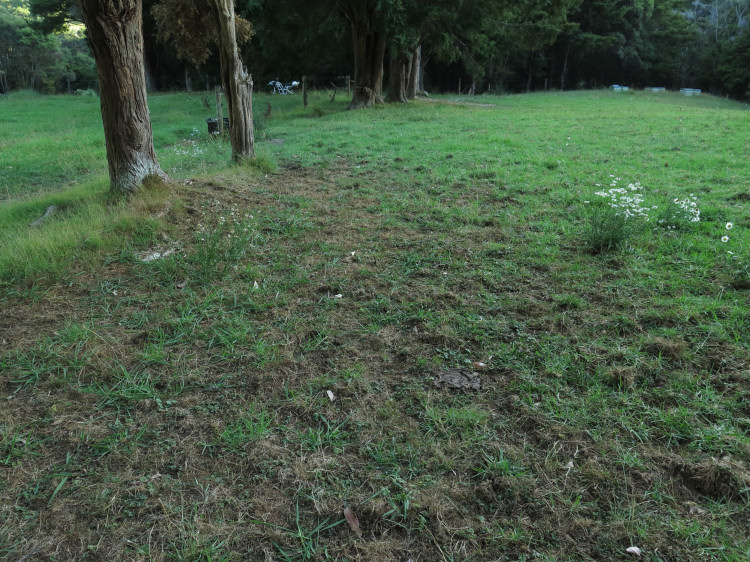 Everything is very dry.  Patches like this are appearing where the soil is too dry to sustain the life of the plants that were growing. 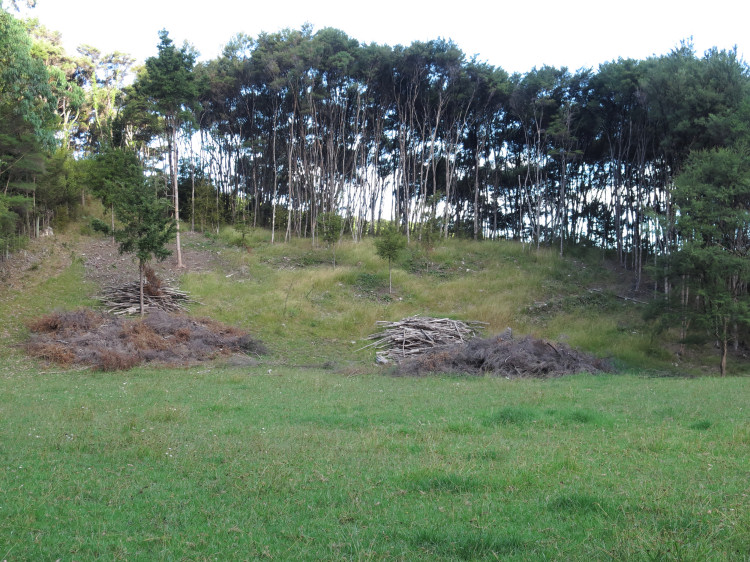 The hillside cleared back in May last year.

The grass growing on the slope now is Weeping Grass, the producer of the nastily sharp seed heads at this time of year.  We'll need to apply some lime and phosphate to this area to encourage pasture grasses to grow.

I had come out to move the cattle through the gate between these two paddocks and to again check everyone for signs of heat.  Today is 773's return date, the last cow I inseminated and she shows no sign of returning to oestrus.  So far my conception rate is running at 93%: 27 out of 29 inseminated cows appear to be pregnant to my insemination (I'm counting Gertrude 162 out until I know whether it was my insemination or the bull's that worked).

The only animal the bull seemed interested in was calf 879, which is a little concerning, although it seemed to be just a passing interest; but probably time to get him out of the mob in case we have any instances of precocious puberty. 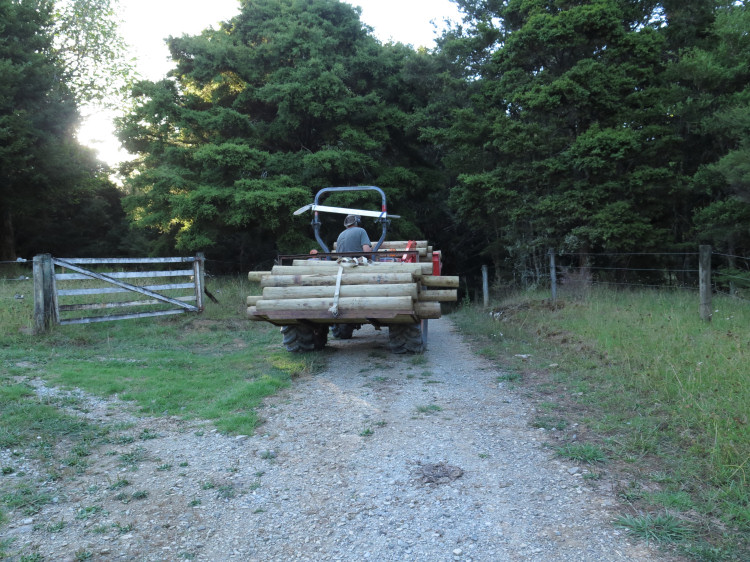 As I came home, Stephan passed me on his way out with more posts for the new fence.  Some of them are extra long, for the low dips where an ordinary length post might, over time, pull out of the ground.

A fine, hot day and Stephan thumped the first strainer in for the new boundary fence just before noon.  Excellent.

I went in to the hospital to be weighed, measured and assessed for a general anaesthetic and a small exploratory procedure at Whāngārei hospital sometime within the next couple of months, to see if the source of my constant blood-letting can be discovered and fixed.

Then I went to the bus stop to collect Miryam, who is back in Aotearoa again, this time for a couple of months on a residential research and writing scholarship at St John's Theological College in Auckland, where my mother studied before ordination as a Priest in Holy Orders. 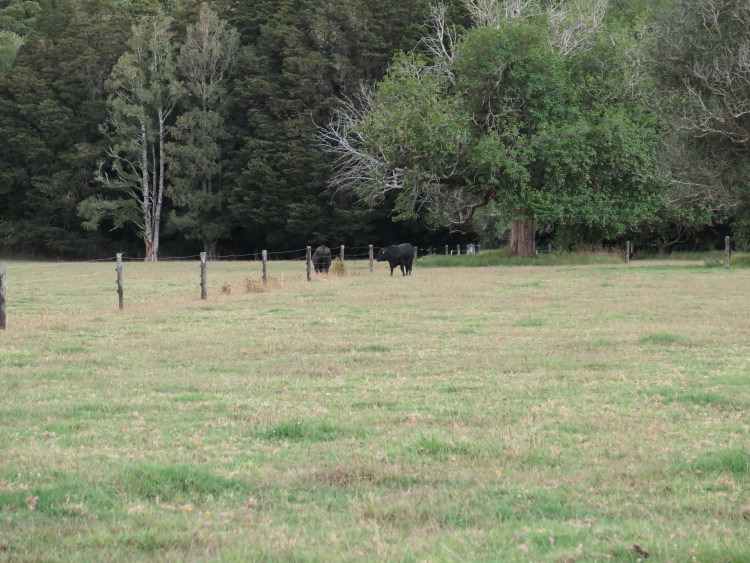 In the evening, while moving the cattle, I drafted the bulls away from their cows and into adjacent paddocks, so they can grumble at each other for a while before I put them back together.  Hopefully this might reduce the ferocity of their expected fighting. 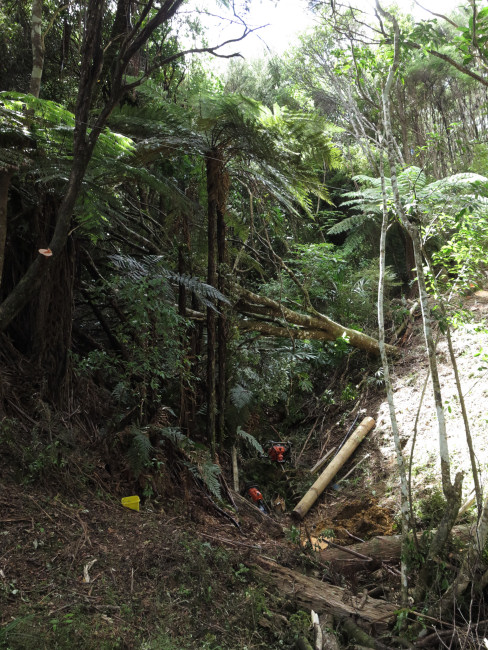 I rode out with sandwiches and coffee for Stephan at noon and found him preparing to install this extra-long post at the bottom of one of the dips. 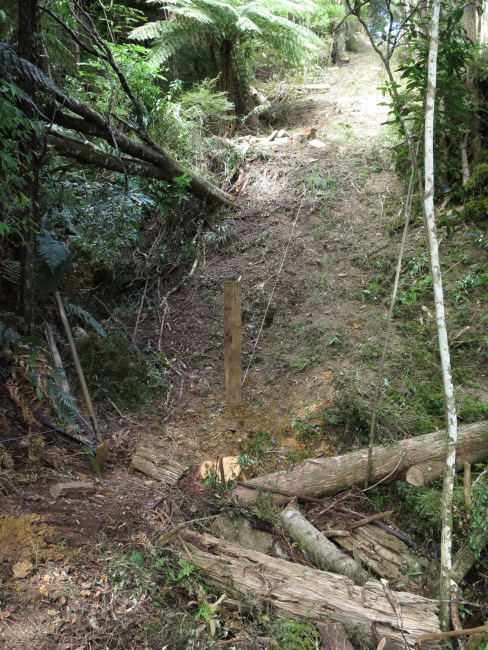 When Miryam and I walked out together two and a half hours later he'd finished that and moved on to another. 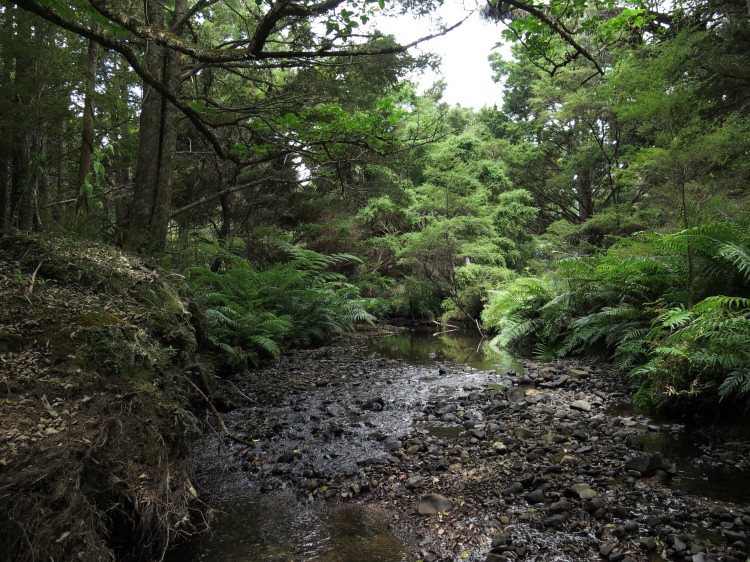 We walked back through some of the reserve areas, Miryam taking lots of pictures but forbidding my use of the ones I took of her!  The stream is beautiful. 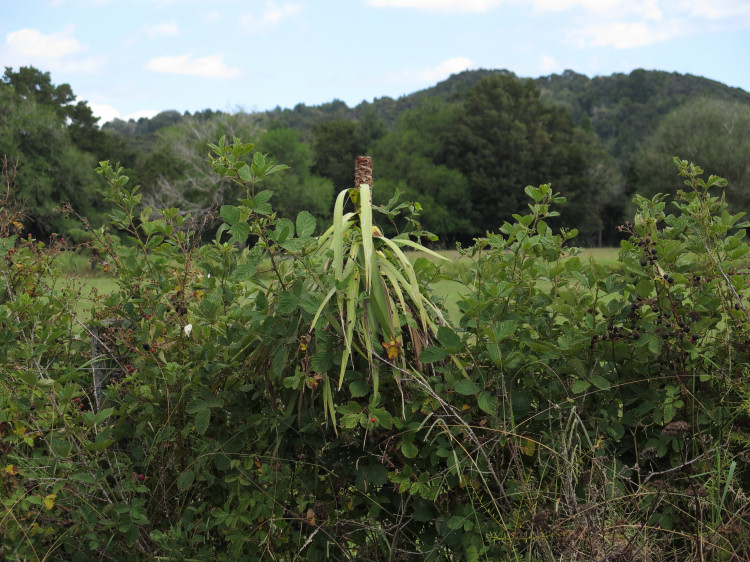 Zella took the top off this poor Cabbage Tree this morning.  Her mother had made multiple attempts on its life in earlier years and I thought it was finally managing to get ahead of them enough to survive.  With the green leaves still present down the trunk, it will probably throw out some side shoots and grow again. 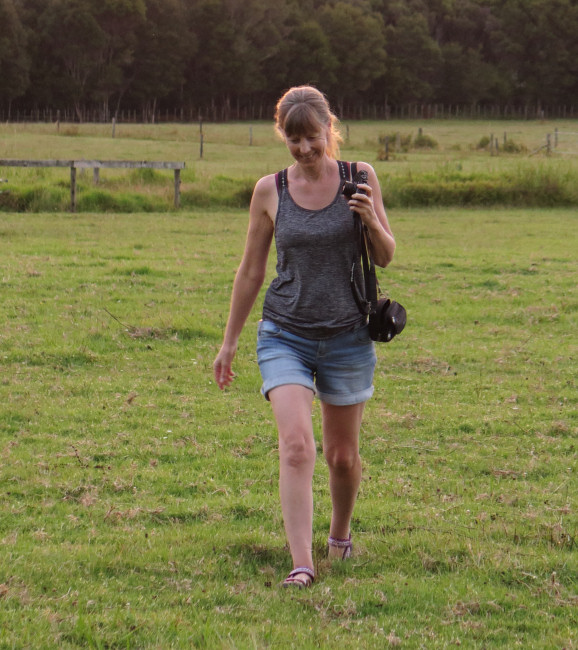 Stephan being tired, Miryam and I went out to bring the calves in and I decided, without consultation, that this is a very nice photo of her. 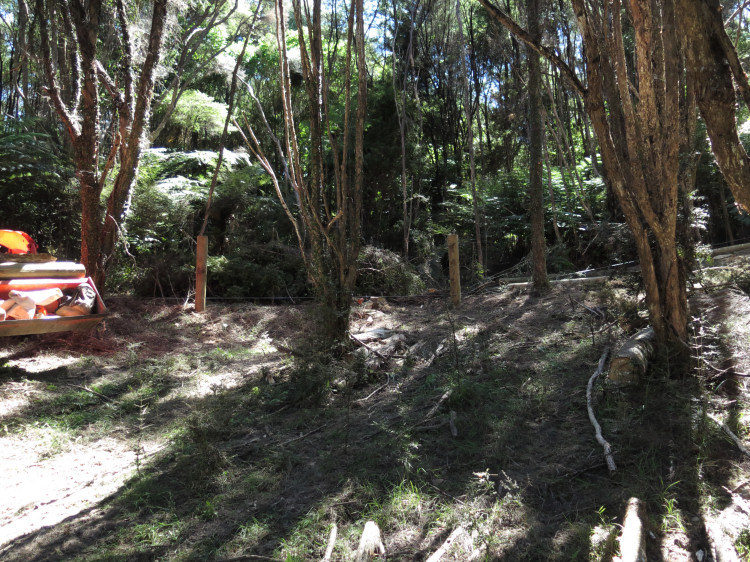 Stephan is fencing at the low end of the boundary, so I can get quite close on the bike before slowly and carefully walking up the hill.  If I exert myself too much, my heart does alarming things, due to the decreasing quantity of blood in my body.

I like sharing in this project, to the extent I may, and it's fun seeing how well things are progressing. 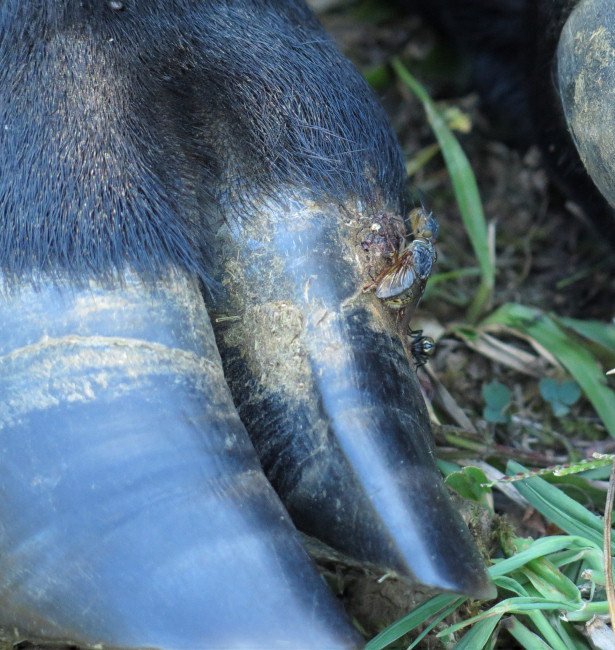 I'm not sure whether I should be concerned about this or not.  Flies lay eggs in wounds, which turn into maggots that eat flesh.  Another reason to watch this calf daily, always checking for changed behaviour signalling any increase in discomfort.