Miryam caught the bus back to Auckland this morning.  Later in the day we went to Elizabeth's where Simon and Mathew and their families were also present.

I made a note in my book about a mucous smear on Eva's rear; only time will tell if that was meaningful.  Some of the cows do have a bit of mucous on their three-week return dates, even when they're pregnant.  But as the bull was hanging around with Eva on one occasion a week ago, it's worth noting and remembering this observation. 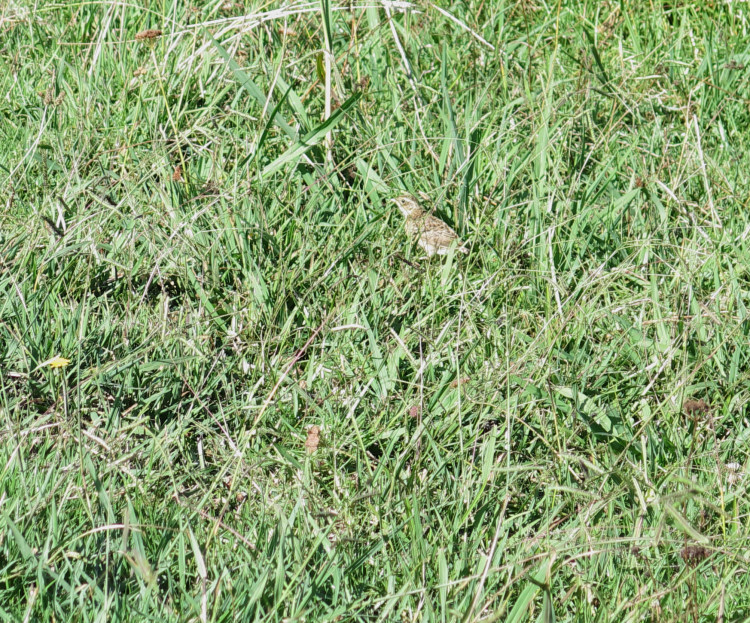 Riding along the lane from Flat 4 this fledgling bird tried to fly up and away from me several times, so I got off the bike to terrify inspect it more closely. 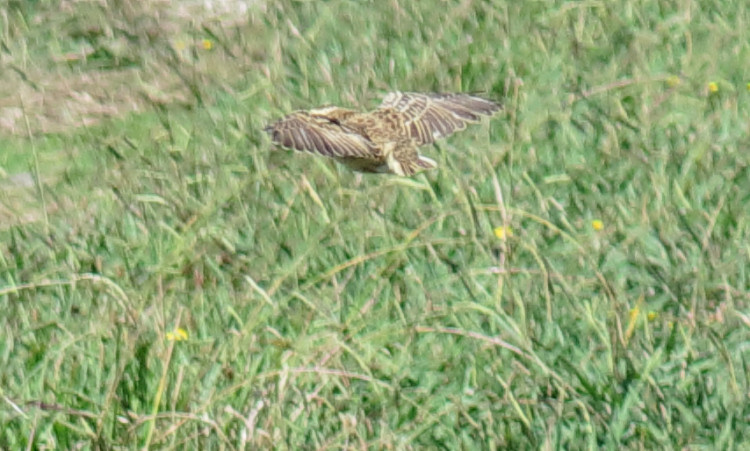 Those light-coloured feathers on either side of its tiny tail tell me it's a Pipit.  I've never seen such a young one before.

It could only fly a little and its parents were no doubt returning to feed it regularly.  The nest was probably along the Windmill lane amongst the ferns between the track and the drain. 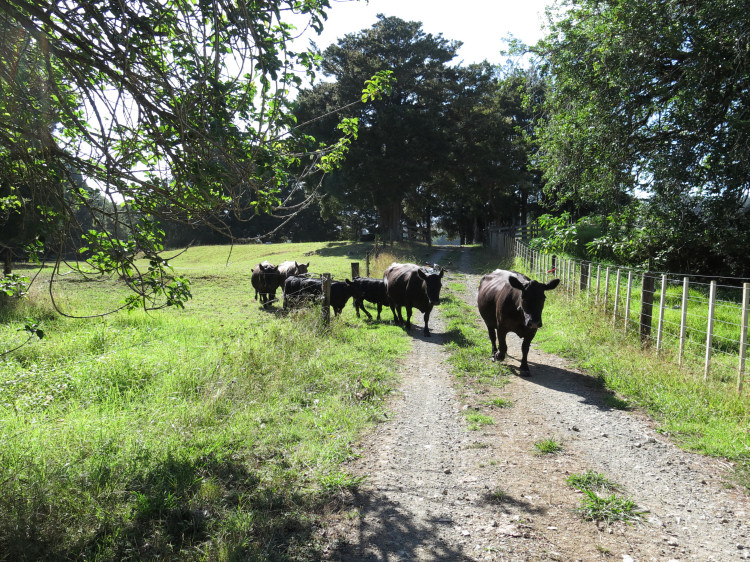 861's injured foot appears to be causing him no more pain and as management is easier when everyone is together, I sent these four pairs out to join the twelve from Flat 4, in the Bush Flat. 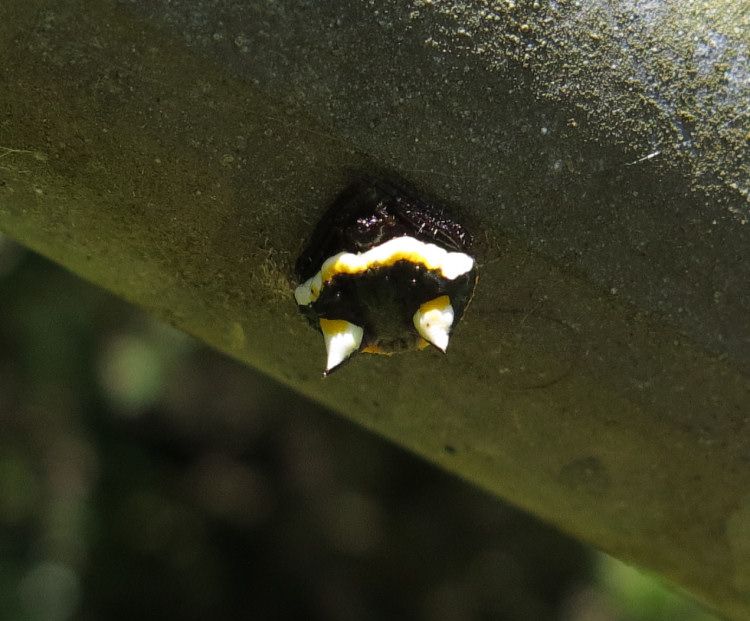 As I opened the gate between Flats 2 and 3 for the bulls, I noticed this Two-spined spider.  I haven't seen one for ages. 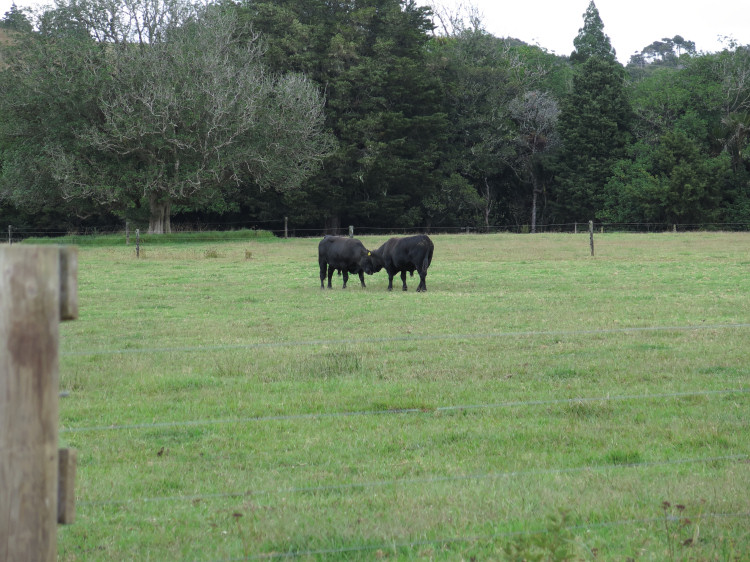 By lunchtime the bulls had discovered their way to each other and were having the predictable fight, pushing each other back and forth.  They're evenly matched in size and strength, so hopefully they'll settle down without injuries. 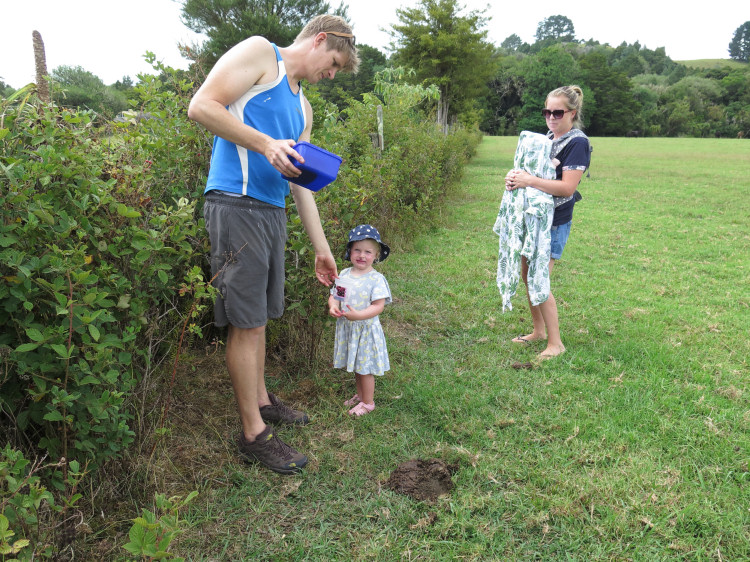 Mid-afternoon Gaye and Brian collected us and we travelled to Kerikeri for an early dinner before another New Zealand Symphony Orchestra concert.  Dinner, at The Pear Tree Restaurant, was a delicious Swordfish dish, a stunning combination of flavours and ingredients.

Dinner ended up being the highlight of the evening, unfortunately, because the concert was spoiled by the malfunctioning of someone's hearing aid in the auditorium, which squealed throughout most of the performance.  Unfortunately nobody could work out what the problem was nor where it was coming from, so the offending device was not found and silenced.  Its tone was audibly out of tune with the music and every intended silence in the music was spoiled.  It was one of those sounds you couldn't quite be sure you were hearing until you did and then it was impossible to ignore.  I watched one of the second violinists casting irritated glances toward a seat in one of the front rows.  It was a pity an interruption was not made, to find and eliminate the disturbance. 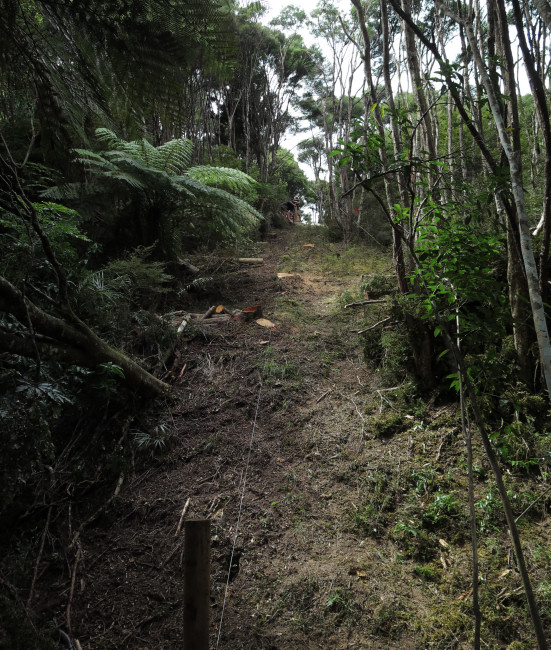 Mathew came out today to give Stephan a hand on the fencing job and I took them lunch and coffee, slowly climbing the hill to where they were working. 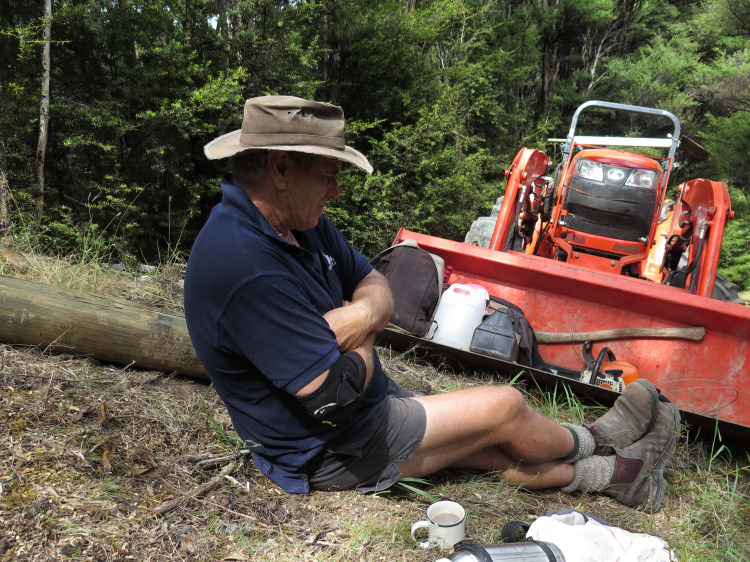 Not a bad lunch-room.

I sat facing Puketutu, the mountain behind the farm from which flows our beautiful water. 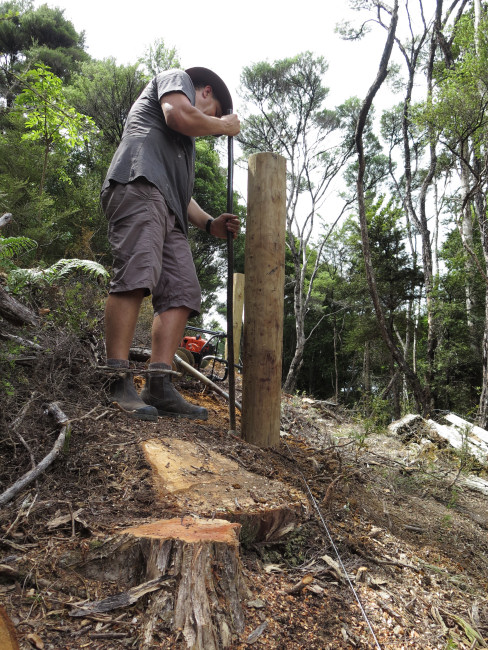 After they'd eaten and rested for a little while, it was back to work: digging holes, setting posts and pounding the loose soil back in around them again.

The post-hole borer machine is an excellent aide, although it's a tricky line with so many trees having been growing along the boundary and their roots being often in the way underground. 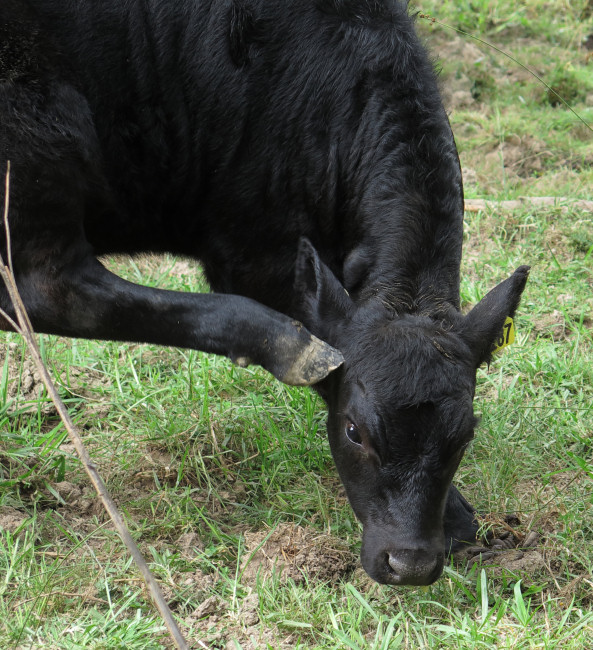 This is Henrietta 187 with a big vaccination abscess on the right side of her neck, visible just behind her ear.  It will gradually resolve on its own. 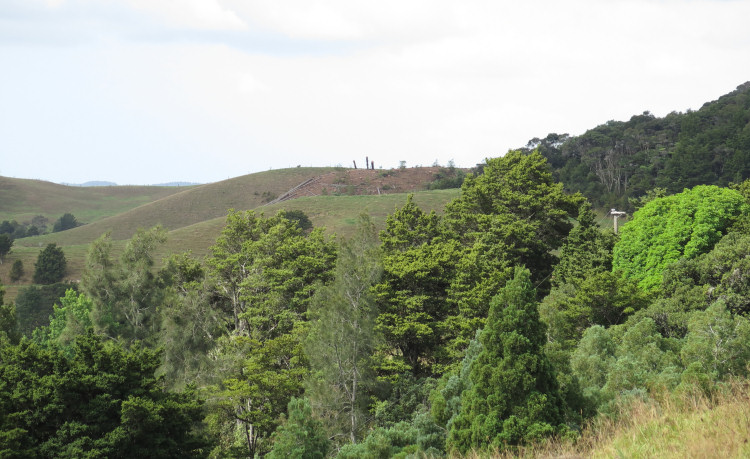 The pine trees on the dairy farm hillside have all been felled. 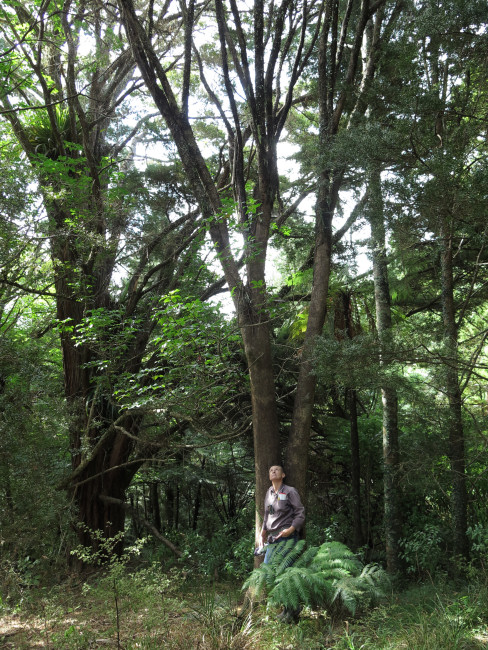 Stephan went around the hillside Over the Road to check the eleven animals there, while I slowly climbed the first slope, before meeting him in the reserve.  There has been some lovely regenerative growth in there since we fenced the cattle out. 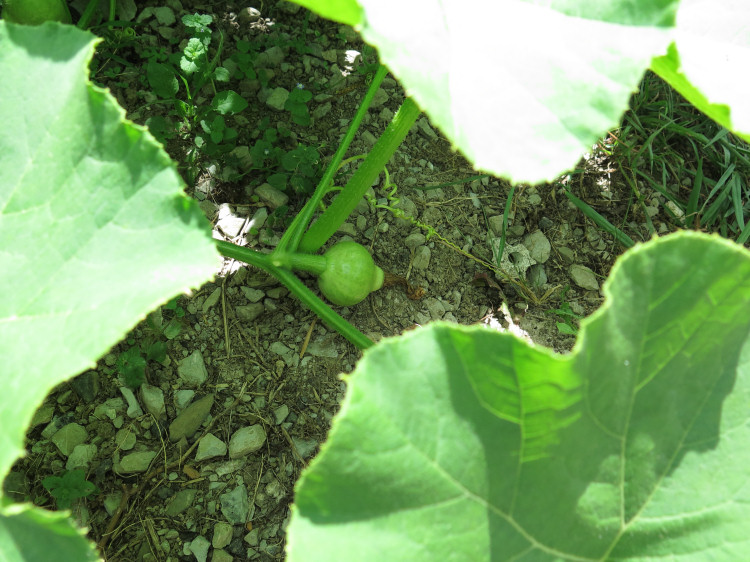 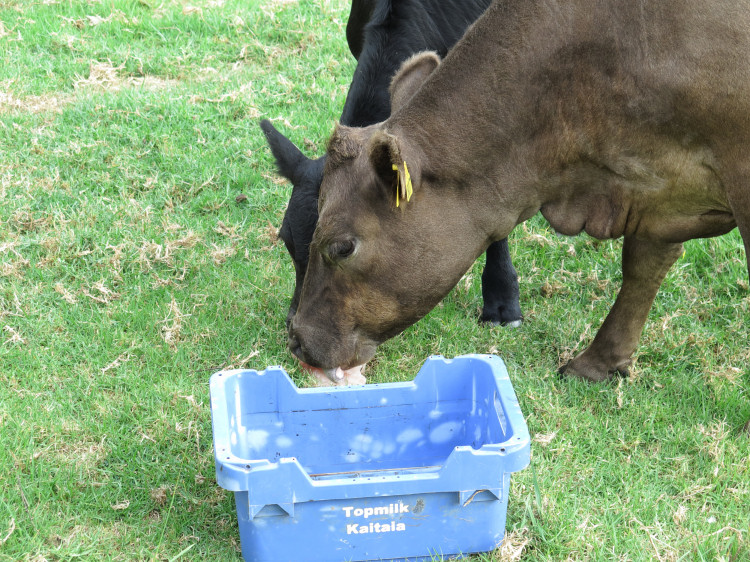 Glia and her calf quickly found a lump of salt I brought to their paddock this evening. 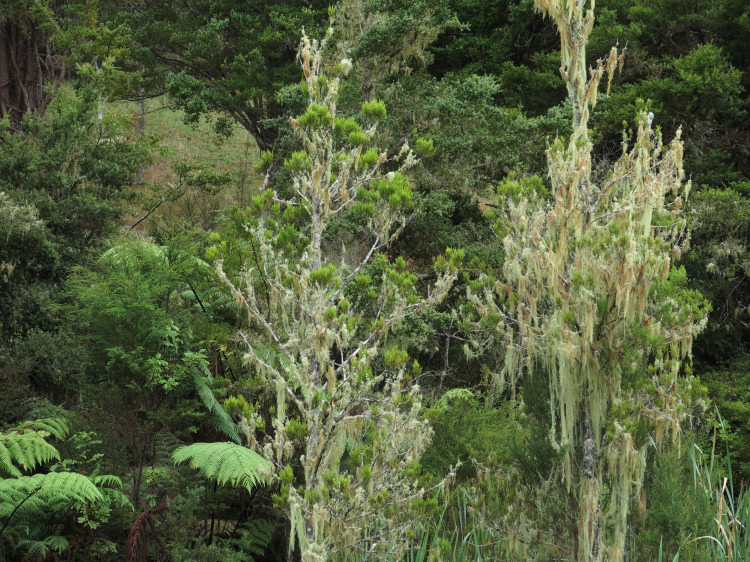 I have read that lichen grows on declining trees but the new green growth of the tree on the left suggests it has not given up the fight yet.

These two grow in the lower end of the big swamp in the Big Back paddock. 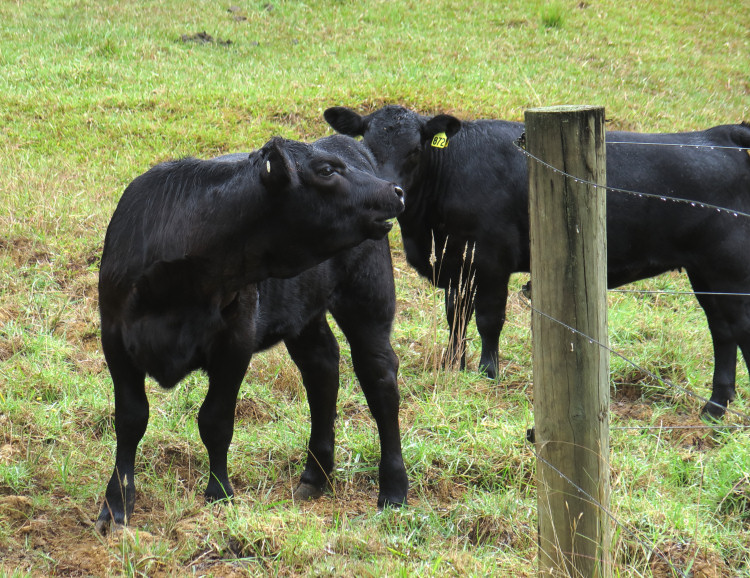 Ellie 186 was continually calling for her mother when I went to check the cows and calves in the Big Back South.  I'd been up to the top of the hill looking for missing cows already and hadn't seen her, so decided I'd have to let her come down on her own.

As I let them come along the short lane and up into the Small Hill, I watched ear-tags as I counted animals and there was 119 amongst them.  She must have run down from some hidden corner when she realised everyone was on the move.

Her calf took a long time to find her, even when she was quite close.  I've observed that they go on calling their distress for a few minutes after they find each other.

In the early hours of this morning, for the third time this week, I lost more blood than anyone should.  Feeling horribly unwell, I suggested to Stephan that he milk Zella early so that if I suddenly deteriorated, we could make an emergency trip to the hospital.   After a frightening half hour of nausea and dizziness I felt a bit less awful so we waited for the 8.30am opening time of the hospital blood-testing lab, where I went with a form the nurse last week gave me just in case something like this happened.  (Otherwise I was to use it a week or so before my yet-unscheduled admission to the hospital.)

There is now a great on-line system for patients to see the results from such tests but it would appear there's a block in the middle of such reporting, because the family doctor must read and then release test results for a patient to see them.  At about 3pm I gave up waiting and phoned the gynaecology department in Whāngārei, to ask if we should perhaps move to a more urgent course of action, since it seemed possible I might otherwise bleed to death before they get around to seeing me?  The lovely woman I spoke with was able to access my blood test result, see that I'd lost 30% of my blood in the last two weeks and went off to consult with her departmental head.  Within the hour she'd phoned me back and asked if I would please make my way to Whāngārei Hospital's emergency department as soon as I could, from where I would be admitted for urgent investigation.

Stephan had been digging in fence posts for several hours and was far too tired to drive us down, so we rang cousin Christina, who arrived a couple of hours later to take us on the two-hour journey.  (I thought Stephan should stay at home and get some rest, but he wanted to come and also keep Christina company on the drive home.)

I was put in a room in the emergency department and talked to a few times by nurses and a doctor and after Stephan and Christina left, someone brought me a cup of Earl Grey tea (from her own private supply, universal blessings upon that nurse) and a sandwich.  I'd earlier been told not to eat, so I was ravenously hungry.  Around midnight I was taken up to a ward and given a unit of blood over the next couple of hours and regularly checked throughout the night - i.e. woken up whenever I managed to drift off to sleep!

Off down to theatre this morning for a hysteroscopy, that fancy way of looking into a uterus with a camera on a tube.  I don't remember much about waking up from the anaesthetic in the first instance but spent the rest of the morning jolting awake in panic that if I didn't wake up someone would think I was dead.  Weird drugs.

Stephan and Christina appeared late-morning and entertained me for much of the afternoon, providing hilarious commentary on the misadventures of unskilled drivers in the public carpark visible from the window.  Those two should be on the stage!

I had expected to be discharged to return home today, based on the one-day procedure for which I'd been waiting to receive a booking.  But apparently that is not the way things work if one has been admitted as an emergency case.  So my ride went home without me.

After they'd gone home, I was moved to a four-bed room with a lovely woman who'd been admitted after doing far too much too soon after a mastectomy and reconstruction surgery, leading to an infection.  We spent several hours in entertaining conversation until late in the evening when another inmate arrived, fresh from surgery (apparently the theatres operate until 10pm each day) who we decided would require some quiet.

Again sleep was elusive.  An irritatingly repetitive noise woke me constantly.  I did not learn, until my later admission, that the noise was the pump and release of calf-massaging pressure pads to alleviate the risk of blood clots in the legs of the post-surgery patient.

Hospitals, oddly, do not include restorative sleep in their list of healing necessities.