The tractor did a bit of "self driving" yesterday.  The hand-brake is a stupidly-arranged system requiring the simultaneous operation of the foot brakes and a lever and it's not always possible to apply sufficient foot pressure while leaning down to operate the lever!  Fortunately there was a large tree between where the tractor was parked and the rest of the slope to the bottom of the hill, or the damage would have amounted to a great deal more than the slight dent in the front-end-loader bucket.

But the tractor then wouldn't start.  Stephan suspected a fuel blockage, perhaps something shaken loose as a result of the sudden stop when it hit the tree.  Overnight the remedy came to him and today he got it going again without much difficulty. 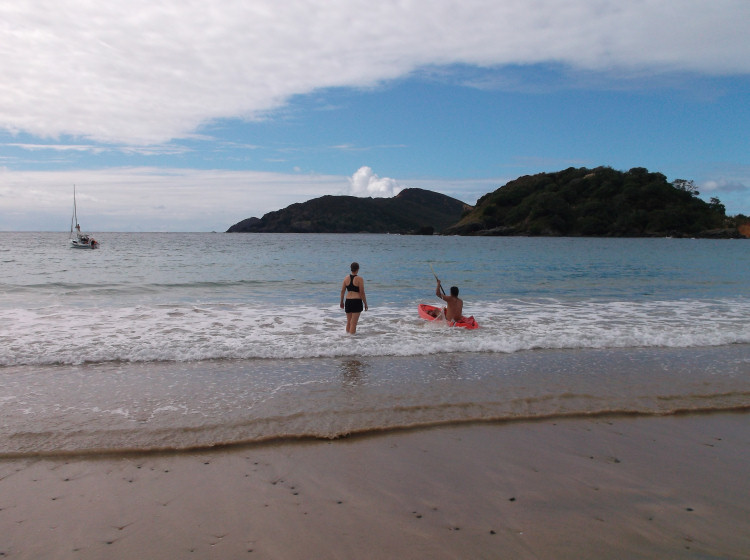 Today Stephan and Ella set off early to go and spend the day with the wider family up at Maitai Bay, at the end of the Karikari peninsula.  There's not room for three of us in the ute but as I still don't find travelling very comfortable, I waved them off quite happily.

Simon and Anna bought a boat a few years ago and then it became William's and this weekend Simon and Mathew sailed it across Doubtless Bay and up the coast to Maitai and Waikato Bays, where they were all camping.

Ella joined several of the family in sailing (motoring, I hear, since there was little wind) back to Mangonui. 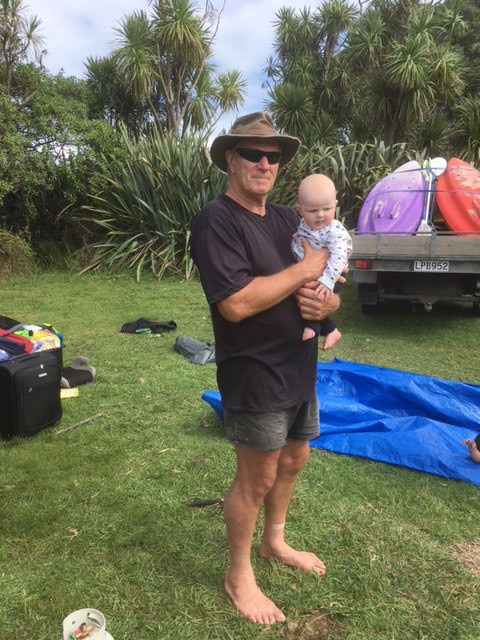 Stephan and Alfred, second child of Anna and Simon. 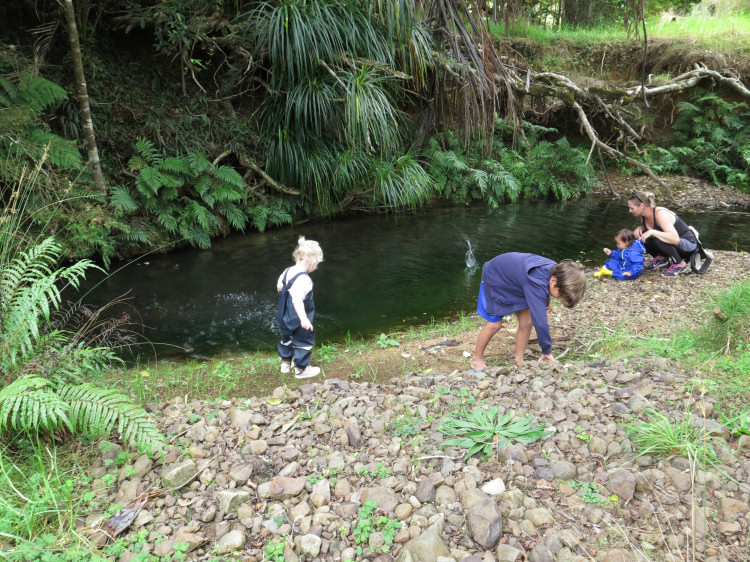 Stephan had taken Simon and Mathew, along with the two bigger boys, Kerehoma and Sean, out to the fence line and the rest of us followed on foot.

We had to stop and throw stones into the deeper pools of the stream, to make satisfying sploosh noises.  Great fun, as long as you didn't get too carried away and accidentally throw yourself in too.  One smallest person got a bit wet! 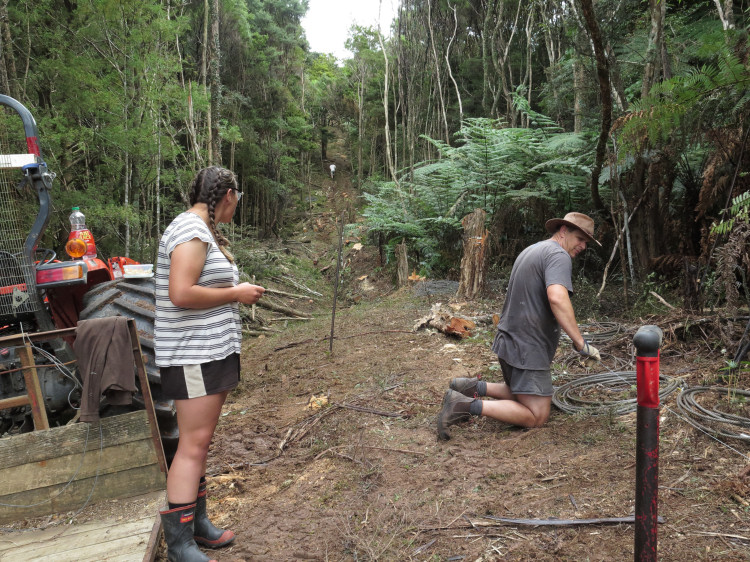 Up on the fenceline, fit Simon was charging up the steep hill with the first wire, as Mathew helped feed it out from the spinning jenny, before following along to help Simon pull it all the way to the top strainer. 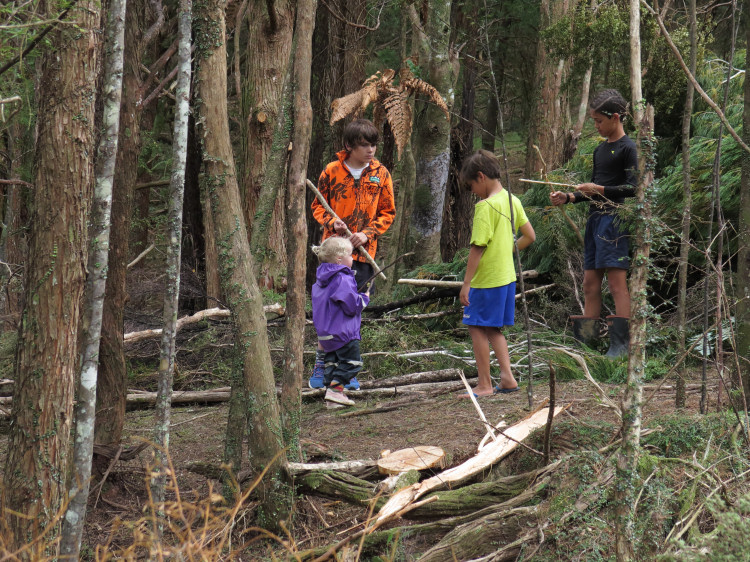 When we arrived the boys were not visible, hiding in the middle of a big pile of cut tree-tops.

They eventually emerged to play with the smaller children. 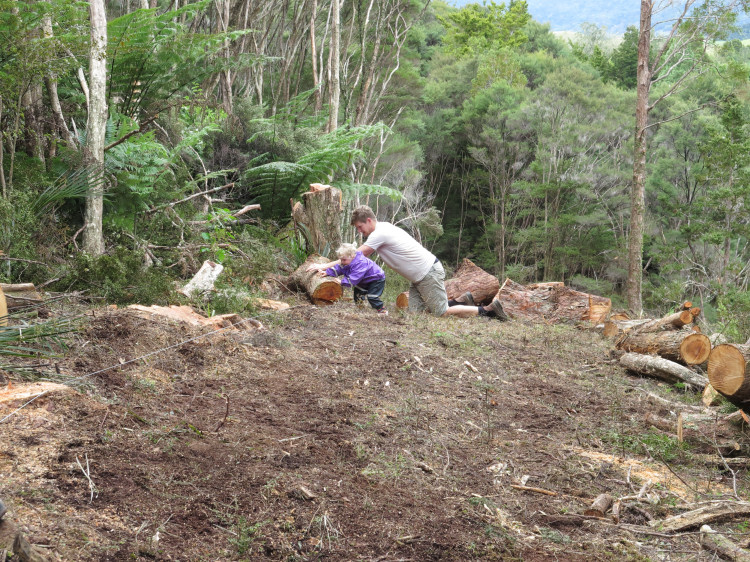 I love watching Simon with Evelyn.

He was shifting logs into a pile on the bush side of the boundary and Evelyn went to help, so they worked together.

I have lovely memories of my own father's similar involvement in my life.  Whenever we children wanted to be involved with what he was doing, he always facilitated our participation.

I was his for'd hand on the Giant at Taipa for several years.  It is possible I was a useful sort of companion.  There must be photos somewhere. 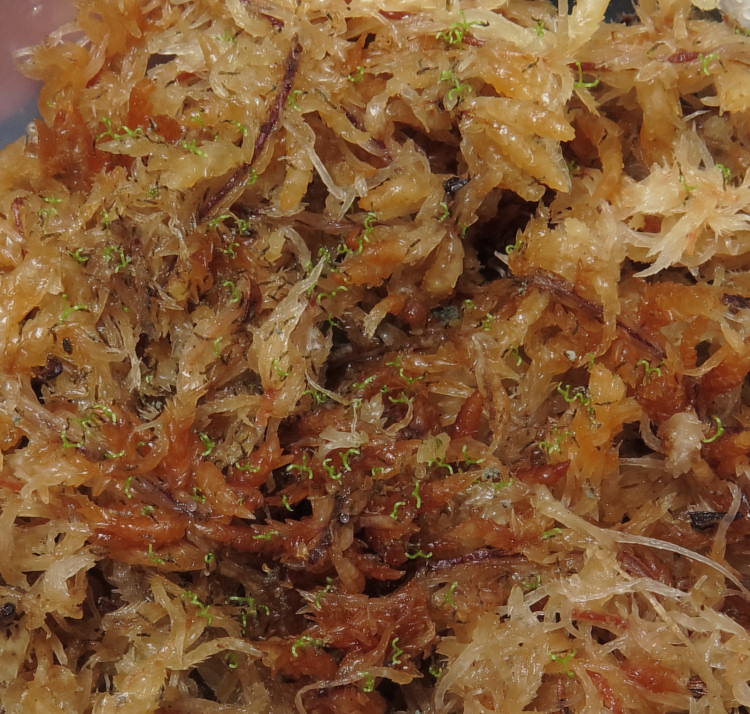 Along with the carnivorous plants, L-J sent me some seeds, which I duly set to germinate on Sphagnum moss, according to her instructions and here they are!  They're tiny but there are a lot of them. 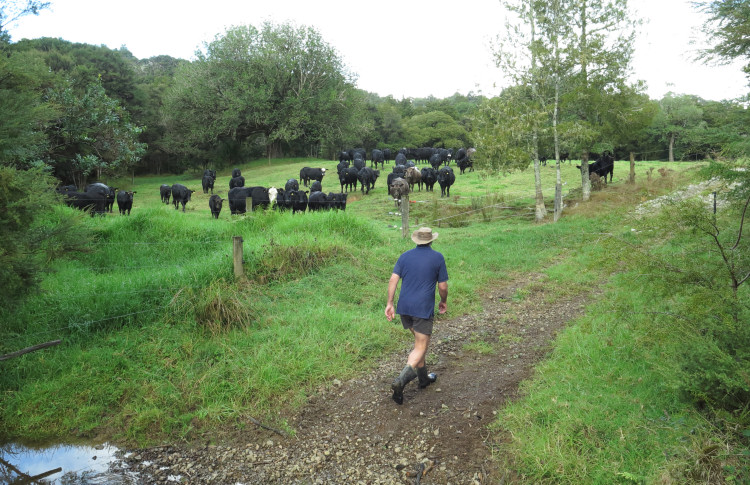 Stephan went off on the bike to set up the gates and lanes for the cows, and Ella and I walked out to the Bush Flat to meet him.  We stood and counted the cows and calves as they came across the stream and along the track.

Then we all followed them out to the Spring.  This was my longest walk since the surgery. 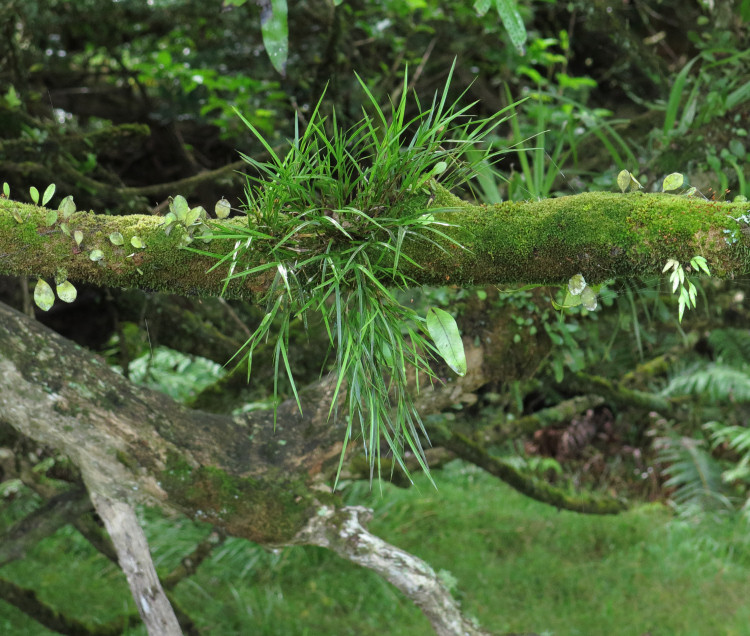 It's time for this orchid, Earina autumnalis, to flower but this one isn't.  Perhaps it is still too young or small. 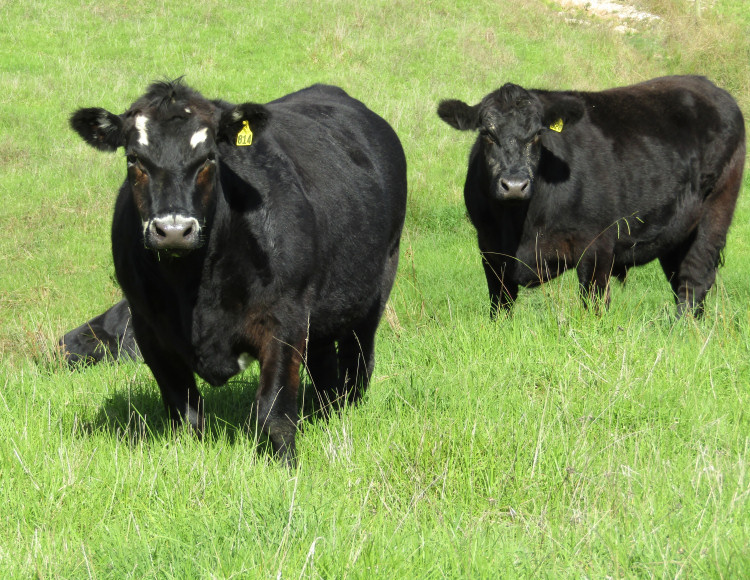 Each year at about this time, Heidi and I start negotiating the sale and purchase of the weaner calves.  She sent me some pictures of those who've grown up a bit. 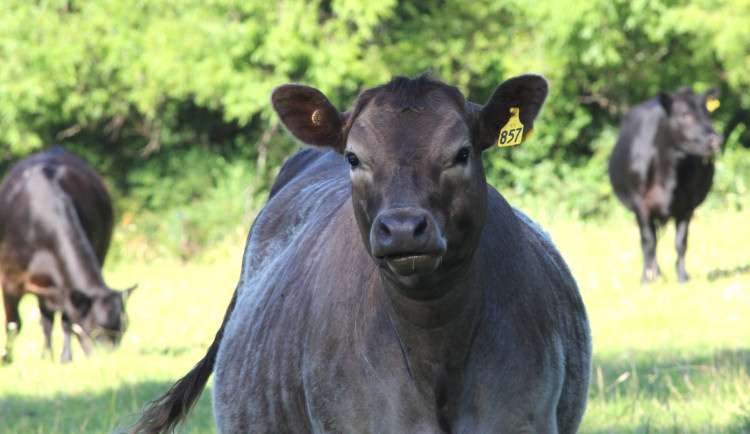 She's beautiful and I'd love to have kept her but she was just a little too nervous for my liking.  She's ridiculously-quiet Glia's younger sister. 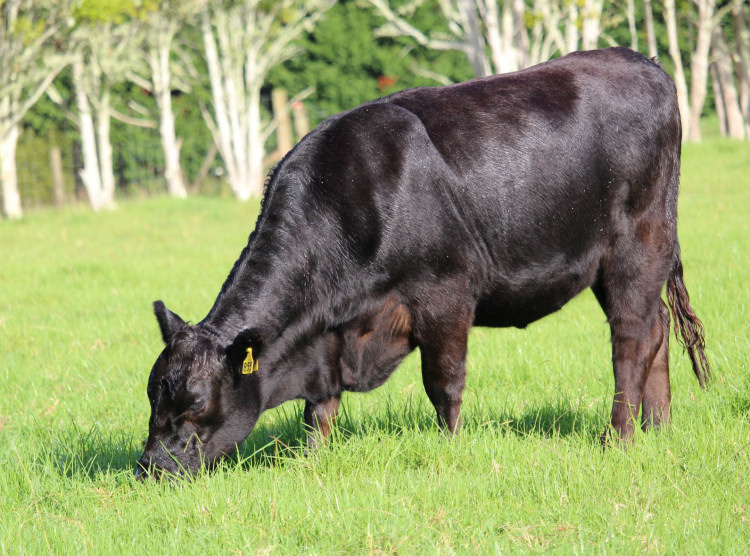 I wonder how big she is now, compared with the others?  She was such an enormous baby. 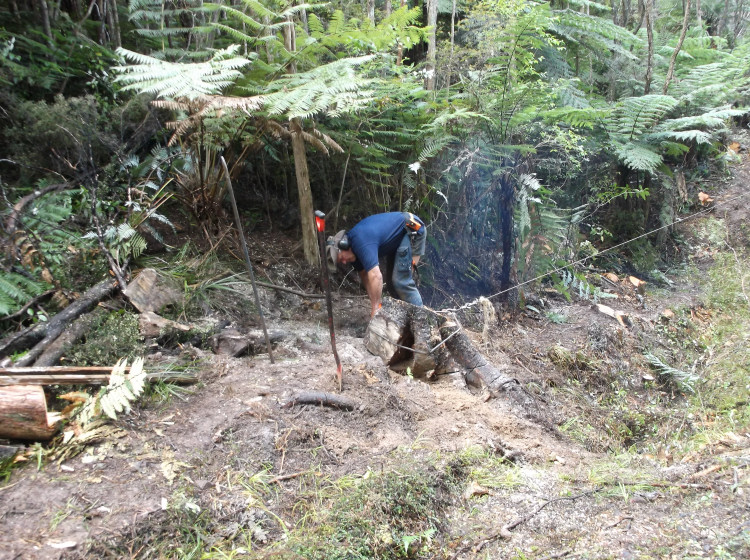 Back to the boundary.  Stephan said getting this stump out was a huge job.  It was of the furthest felled tree in this picture a couple of weeks ago, a tall Kahikatea with a substantial root system to hold it steady where a lot of water obviously flowed down the hill around it - there's a big groove below it where the water has obviously poured over many years during the rains. 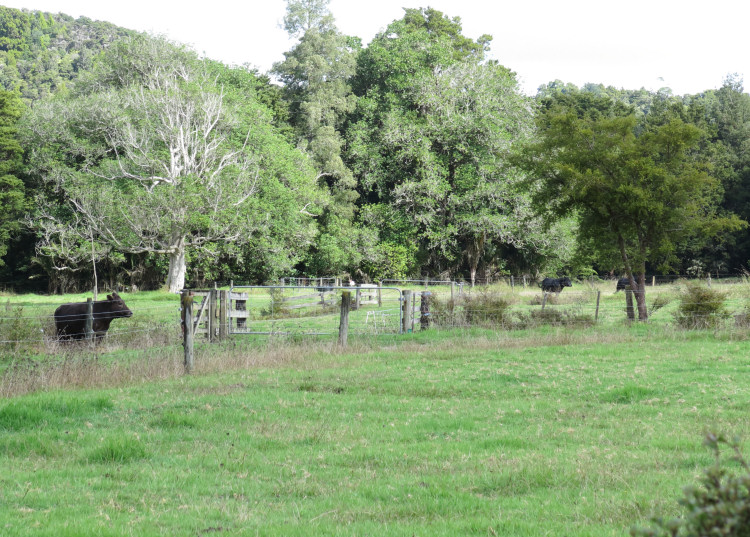 From my office window I noticed the bulls behaving in an odd manner, appearing unsettled by something.  They were sniffing the wind and agitatedly pacing back and forth.  Then Glia and the two calves began behaving similarly.

I stepped out to sniff the breeze myself, detecting the slightest whiff of burning animal, somewhere far enough away that we can't see any smoke, and that we only got a bit of the scent while the breeze came in exactly the right direction.  It's interesting that animals are so alert to that smell, when it's not one with which they are familiar. 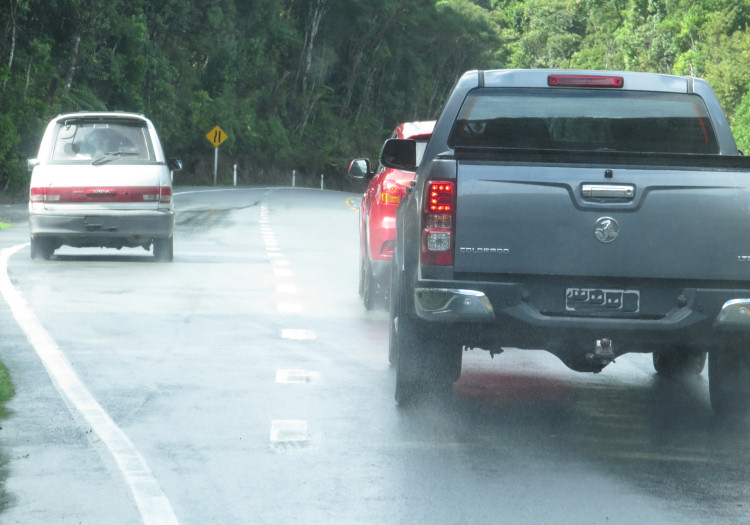 Ella went to spend tonight and tomorrow with second-cousin Emma and we went off to an appointment in Kerikeri.

The Mangamuka Gorge is often a fraught bit of the journey, unless one has allowed ample time for hold-ups, which today we had not.  There's a "slow vehicle bay" about half-way up on both sides of the hill and if you happen to be in the right place at the right time, you get past the slow vehicle/s and away you go.  The entire journey, at a safe pace, takes only about fifteen minutes, but when you're stuck behind something really slow, it feels like forever.

The road is steep and many of the corners are very sharp.

We'd been following these three vehicles from the bottom of the hill, hoping the driver of the first car was familiar with the concept of the slow lane and would act quickly when we reached it.  He did, and continued considerately, so all three of us could pass him.  We tooted and waved and continued contentedly on our way.

We've met other drivers who have failed to note the intention of the passing areas, continuing to drive in the main lane instead of letting following traffic pass.  On one memorable occasion here, a complete idiot pulled over to the left, but then raced us as we came up beside him, almost forcing us into the path of oncoming traffic. 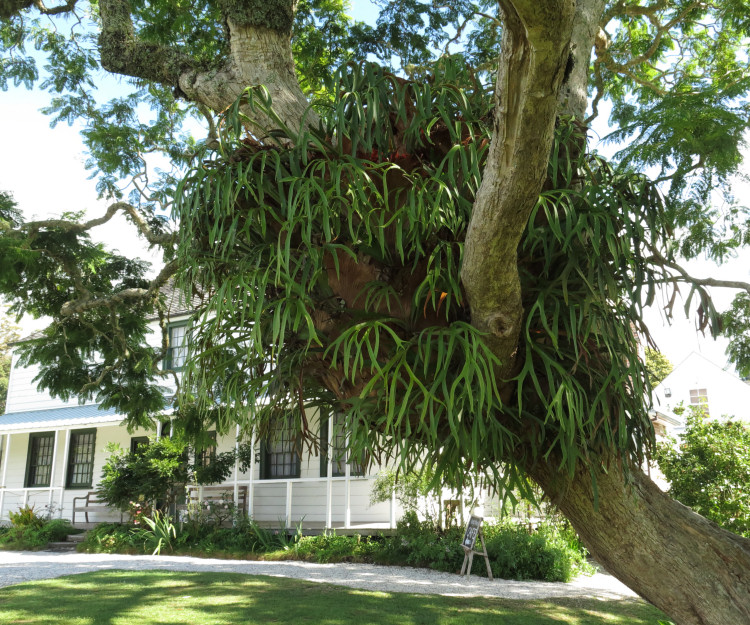 We arrived in Kerikeri with enough time to do something I've intended for a while: pop down to Kemp House and take a picture of the enormous Elkhorn Fern, Platycerium bifurcatum, in the Jacaranda tree on the front lawn. 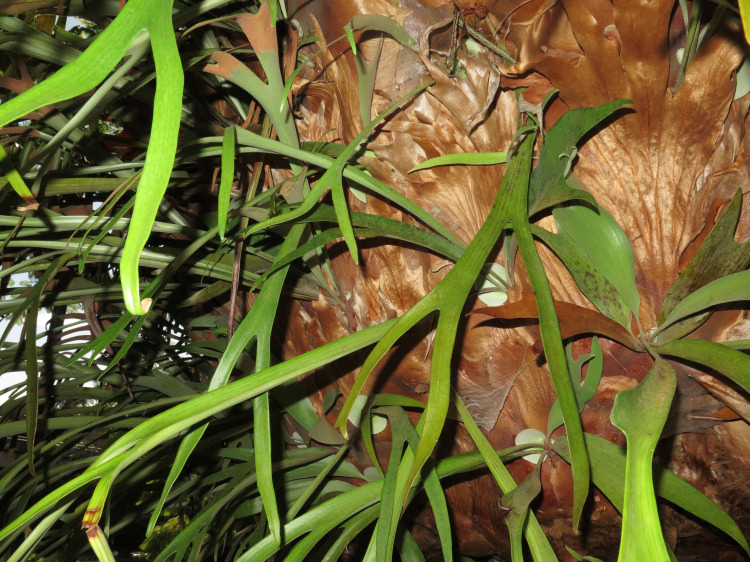 I have wanted to come down here with the camera since I spotted a small plant in a Totara tree on visit to Kerikeri last year. 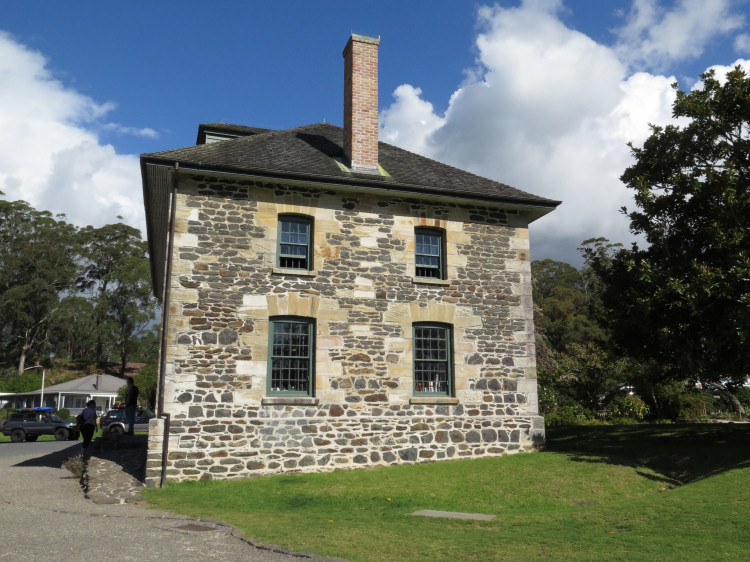 During my recent post-surgery recovery, I downloaded a jigsaw puzzle app to the ipad, so I could do puzzles while lying around in bed.  One of the last ones I did was of the Stone Store.  It's a very photogenic building.

Sarah and Karl and the children had come out to visit us in the morning, but forgot to bring us some Pāua (similar to Abalone elsewhere).  We suggested that we could come out to see them in the time we had available between returning from Kerikeri and going to attend our Te Reo class in the evening, so as not to miss out on such a treat.  Karl had cooked Pāua and cream and we had an early feast, while the children continued to play outside.  What a pity they don't like Pāua.  Yeah, right.

As I sat writing at my computer, there was the sudden huge roar of one of the Defence Force Hercules planes as it flew directly over our house.  It was so low and fast that I didn't have a chance to grab the camera but when I heard it come back again, managed to get this picture as it returned South after a flying over the ANZAC service in Kaitaia. 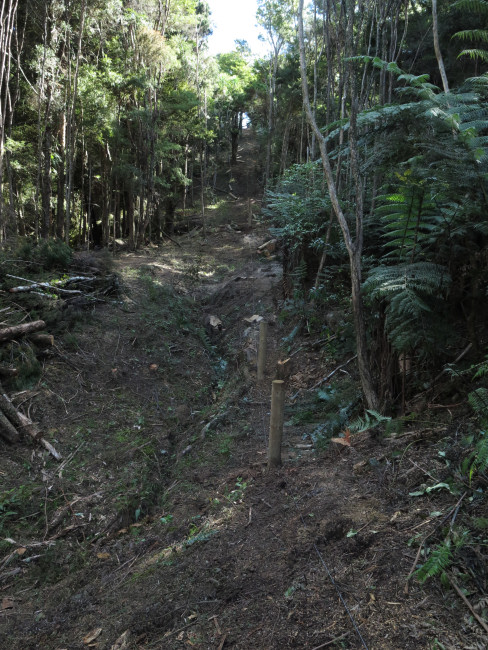 Great-nephew Liam came out today to give Stephan a hand with the fencing work.  He and Ella rode out on the back of the tractor with Stephan and later on I went for a walk to see what they were up to.

This is a picture from about a third of the way up the hill, before I powered my way up, barely stopping, all the way to the top!  What a relief to be able to move like that again, without fearing sudden collapse.

When we'd first walked down this slope talking about replacing the fence, Stephan thought it would be an easier job than the first section on the other side of the hill.  But it ended up being a much bigger job, with 69 big trees to fell before the fence could be rebuilt on the boundary line.

While that might seem like a dreadful environmental impact, imagine if we'd been the kind of people who would hire a huge digger to come in here and clear a path for machinery to get in to build the new fence.  There would have been a wide, raw clay scar through this area. 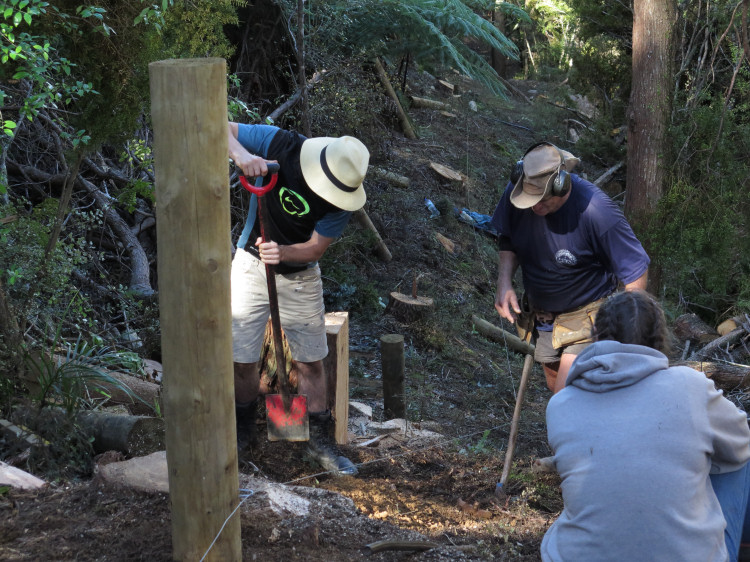 At the top of the hill there was some serious hole-digging going on, through the roots of some of the huge, felled trees.

Stephan had an Uncle Lewis, who had a farm when Stephan was still at school, where he went for some school holidays.  By the time the Mathew family came here, Lew had retired.  Stephan remembers an early visit from Lew and Marjorie, when Uncle Lew came out to help him with the fence he was building up Flat 1.  Lew was the best and fastest post-hole digger Stephan has ever seen.

Stephan has been telling this story to his own nephews while working on this fenceline and it amuses me that he's probably as good and fast, and just as old, and in years to come there might be similar stories about Uncle Stephan.