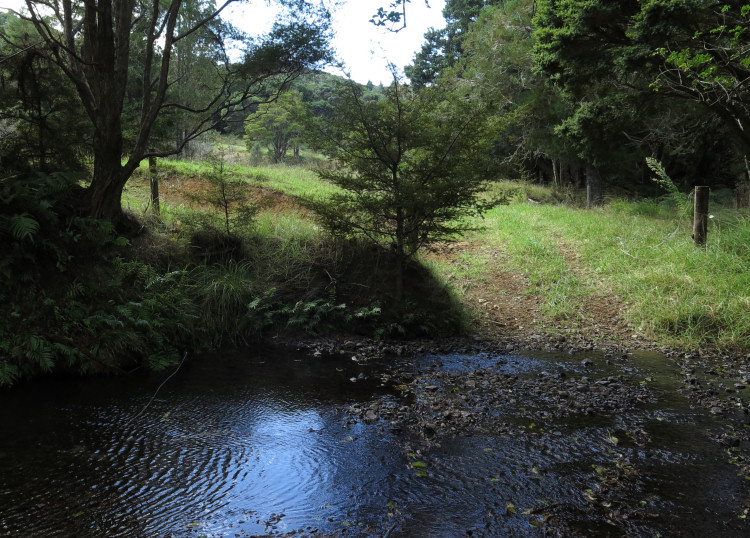 Mathew and the two boys came out to help Stephan on the fenceline today and I went for a walk, thinking I'd try and get there to see them.

But walking down the slope to the stream felt like quite far enough.  I took the picture only to prove I'd come so far with good intent. 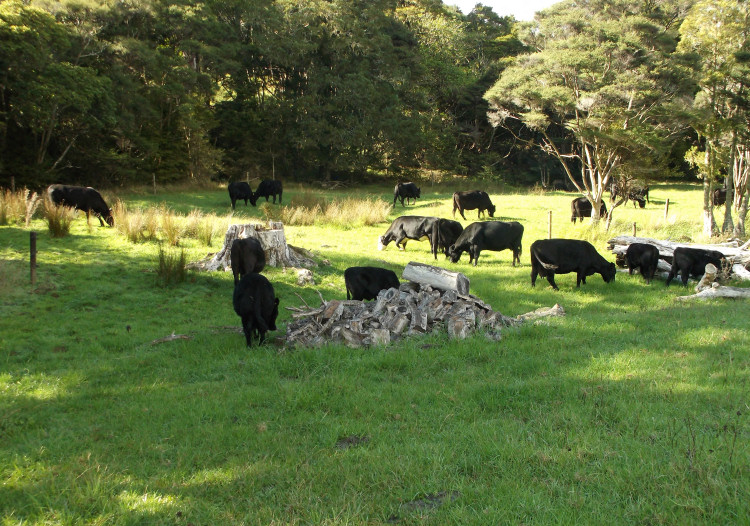 Stephan keeps bringing me nice photos of the cattle. 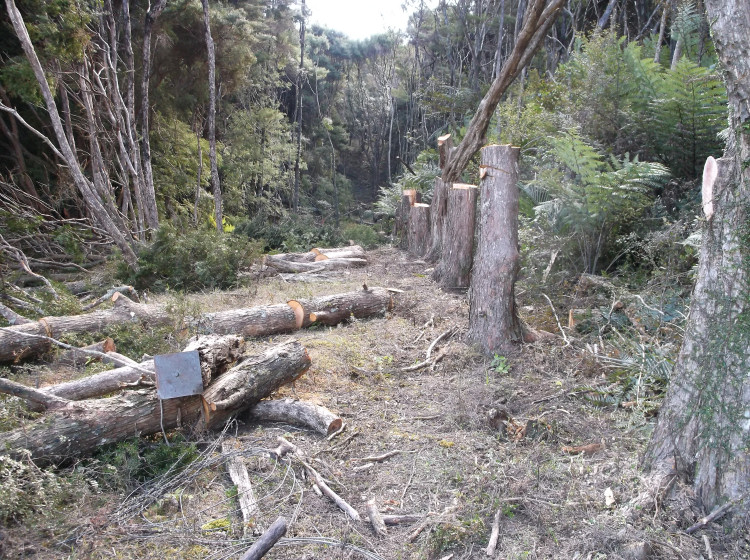 After moving the cows, he went back to the boundary job and worked for far too many hours today.

The square of metal is aluminium, nailed to the top of one of the ancient posts.  Presumably they were put on to help protect some of the posts.  I don't think they were ever on all of them, so I don't know why some in particular. 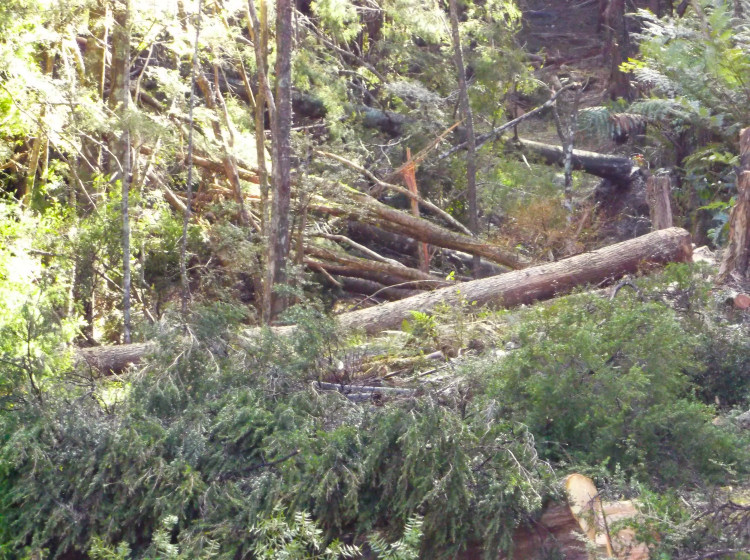 It's not a great photo but does give a real sense of the size of the job.

Where there are big trees on the other side of the boundary, there's just no way to drop these trees in that direction, so they have to come our way, then have to be cut up.  Cutting down a tree is only the smallest part of the job.  Tidying up afterwards is the larger task. 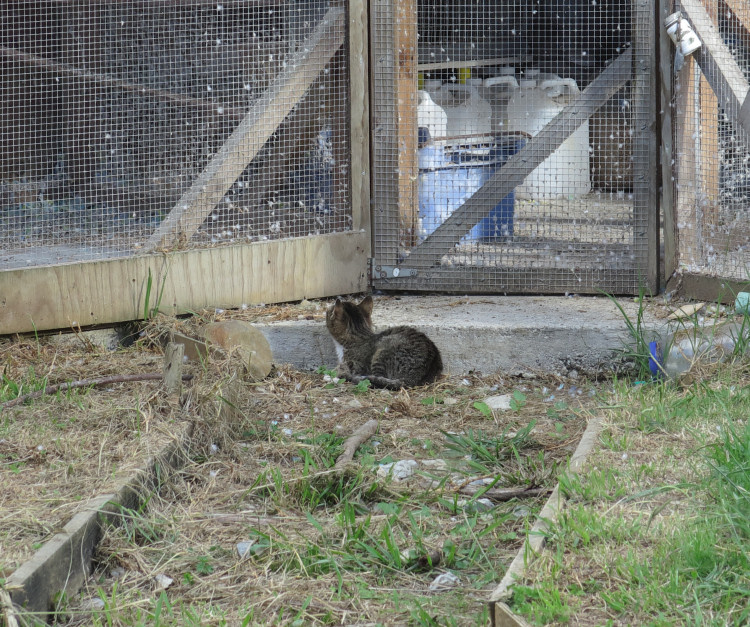 This very attractive little kitten was sitting calmly outside the aviary this evening.

I was watching from the kitchen and tried calling the usual "kitty kitty" to it but at that it dashed away, belly low to the ground, as a frightened, untame cat does.

It came back to the front of the house a little later, causing Floss to give what I now identify as her "stray mammal" screech, quite different from any other call.

Stephan set one of the live capture traps beside the aviary before dark and the kitten was in it in the morning.

It must be kitten-dumping season again.  People are cruel.  Little cats like this end up living miserable, short lives in the wild. 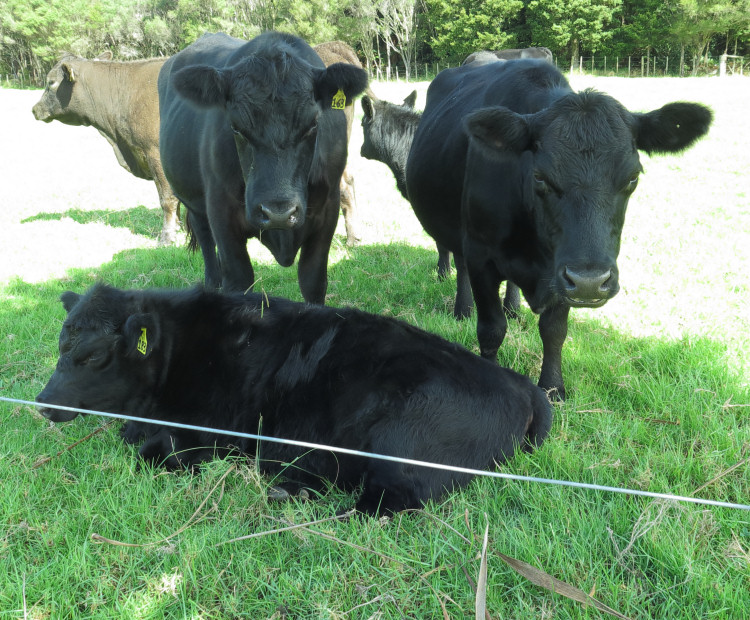 Stephan described a cow on heat when he moved them this morning and I decided it would be nice to go for a walk to see them in Flat 5c & d.

As I had thought from his description, it was Emergency again.  I'd hoped that her earlier sign of heat had been only a hormonal glitch but no, here she is again, with the steer, definitely on heat, definitely not pregnant. 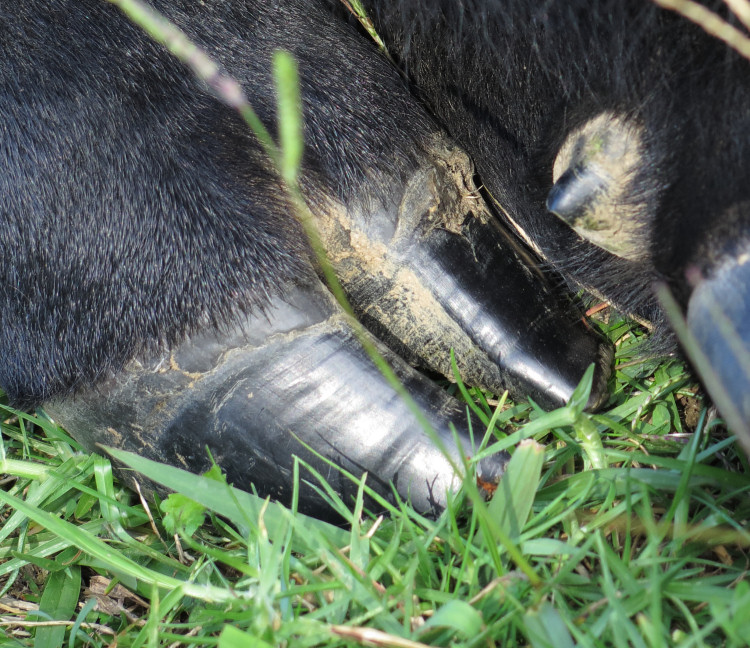 861's foot is still healthy enough as far as resisting infection is concerned but I'm not overly happy with how it looks.  I had hoped the hoof would be obviously growing above the area where it was broken.

I'm not keen to get anything done about it while he's still quite comfortably walking around.  It's going to take longer than I thought to grow out.  I suspect he's going to end up spending his life here, rather than going off with the other weaner steers.  Can't be selling damaged "goods". 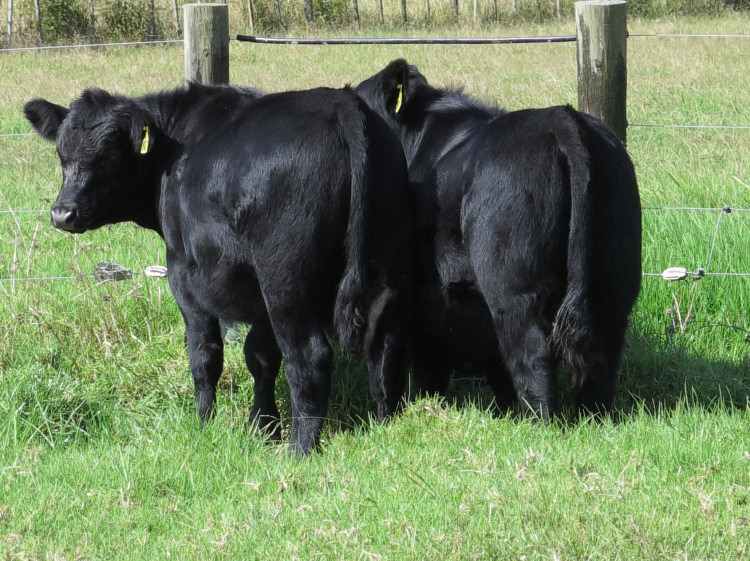 Look at my babies!  613's son is on the right, six months old now (goodness, better start thinking about weaning!), with such an impressively round rear!  Grey 607's son on the left is a couple of weeks younger. 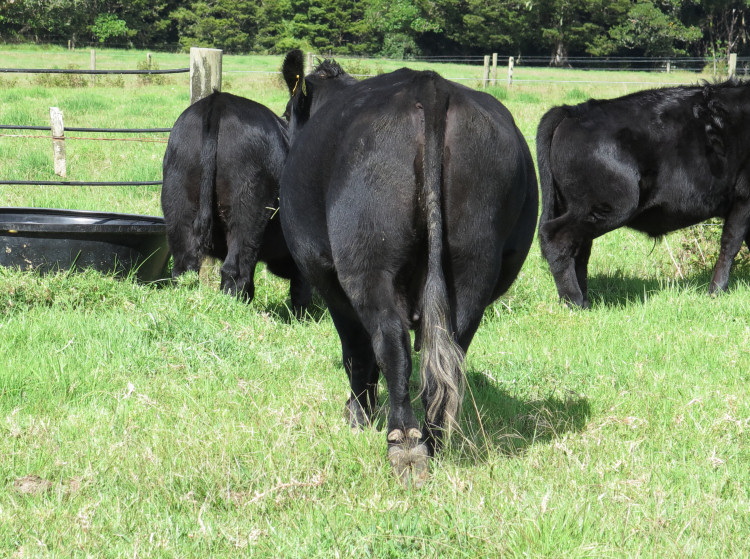 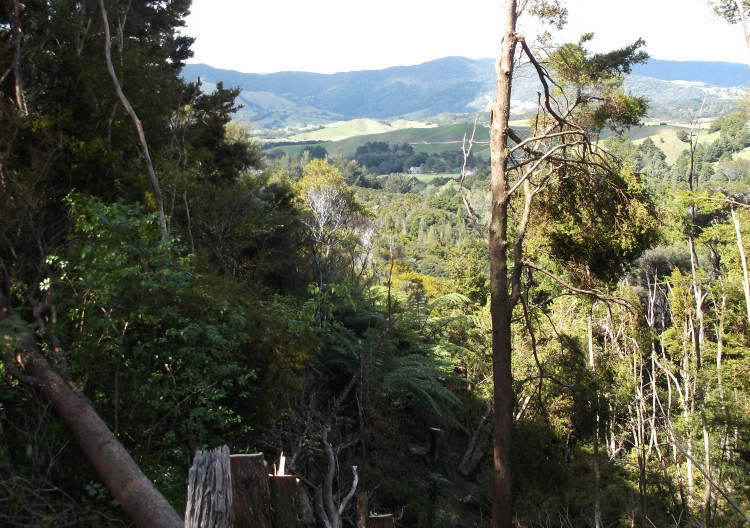 There's now a clear view out down Diggers Valley from the boundary fenceline in the Tank paddock.

We'll have to look back from there when we next go down the road, to see if we can see the line in the tree-tops. 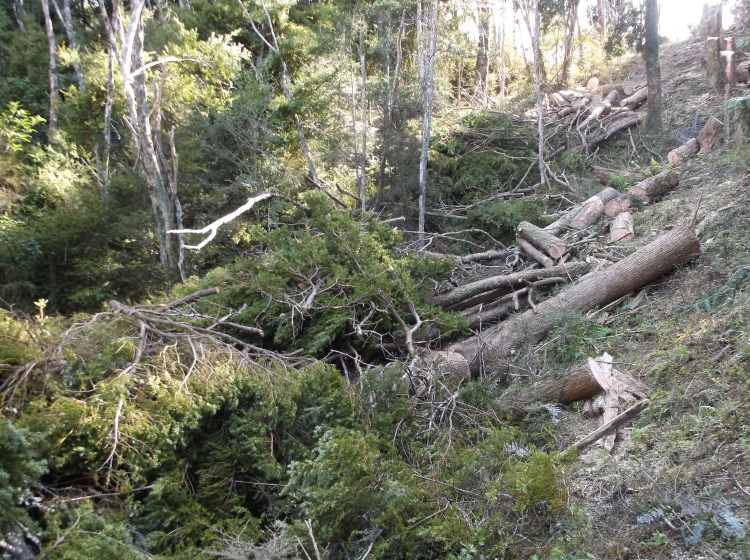 Some of the tree-tops can stay where they landed, since parts of this hillside need to be fenced into gully-protecting reserves.  The big logs will be dragged down the hill for wood working or firewood and the rest piled into heaps inside the intended reserves. 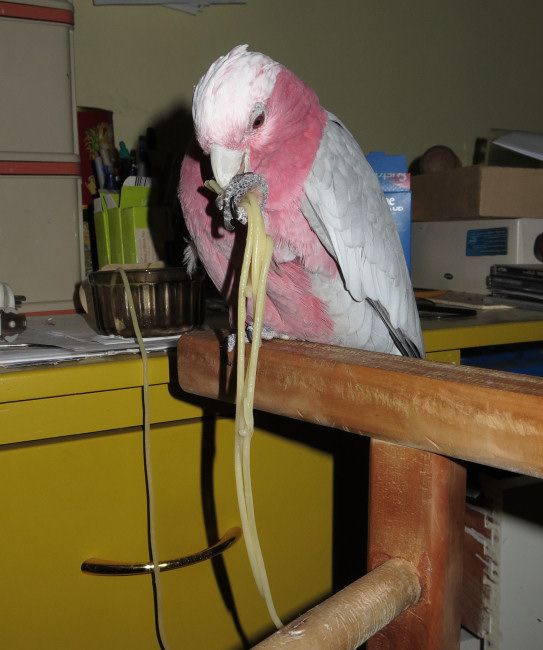 Our satellite internet data allowance has been doubled this month so we're watching a bit of "television" on-line.

Usually we sit down with dinner, with Floss on her perch beside or behind us.  She is not a dainty eater of one of her favourite things, spaghetti.  Rice and Kumara are her other favourites from our dinner plates. 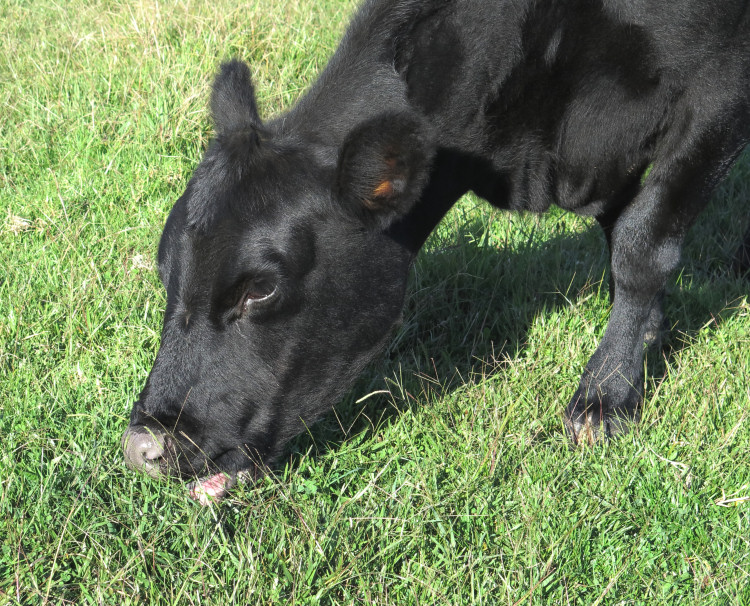 While Stephan has been cow caretaker, I've given him the list of tag numbers which always has to have several notes about cows without tags.  Now there's another one!  This is Ellie 119, whose "119" is no longer present.

The NAIT system is finally going to crack down on monitoring the identification of all cattle so I will have to get organised and order replacement RFID tags for those cows who've broken their tags out of their ears.  The NAIT button tags have generally been the first to go, many cows retaining their numbered tags longer than the RFID tags.

Replacing lost NAIT tags will be one of the first jobs we do with the new head bail, whenever we finally get the yards built. 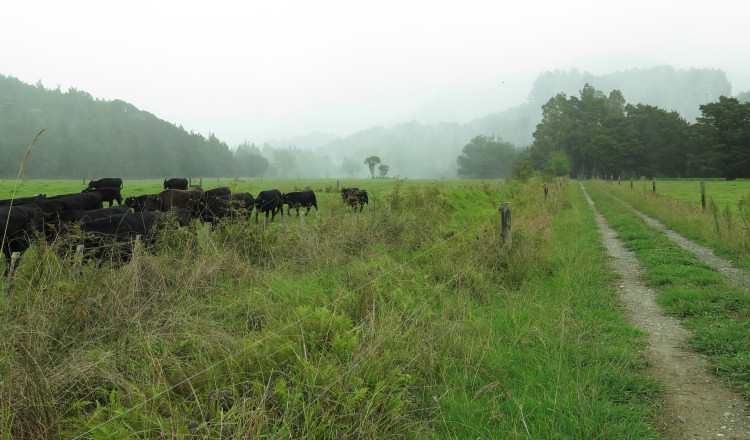 I had been standing for about thirty minutes, two posts along from here, using some paid-for cell-phone minutes to catch up with my uncle, Peter.  We talk far too infrequently!

I'd watched some rain showers pass across the hills behind the farm as I stood but fortunately none had then spread as far as the flats.

Stephan, realising that I'd been standing for a long time, drove out in the ute with the stool, just as I finished the phone call and watched this heavy shower very quickly and audibly approaching.  As I climbed into the ute, the heavy raindrops fell. 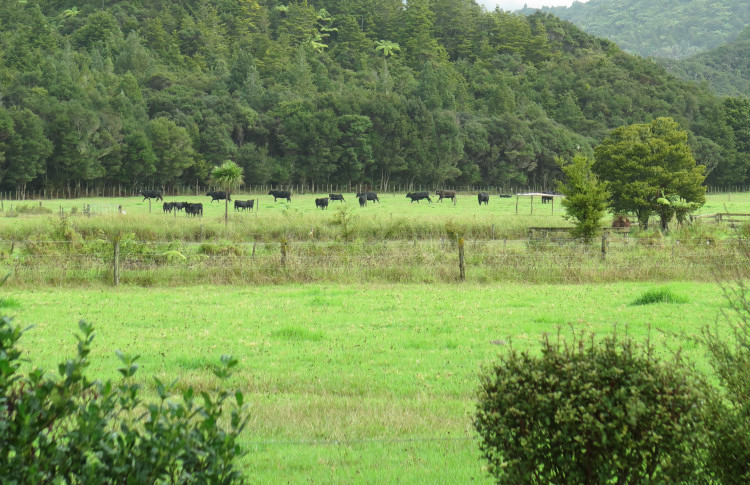 While we were out there, Stephan drove along to set up the gates for the cattle, who were grazing 5a & b, to pass into Flat 3.  The cattle, all in 5a, stood and watched us do it with numerous calls of protest but no movement.

We watched from the house during the next couple of hours, waiting to see when they'd work out that they could move to the new grass.

Eventually someone who'd returned to 5b, the paddock that opens directly to Flat 3, noticed the open gateway and moved quickly through to the new pasture.  Everyone else noticed and the cleverest cows then went up the fenceline between 5a & b and diagonally across 5b to follow suit.  A little group of not-so-clever cows and calves remained in the corner of 5a.

In the picture, the fast-moving cattle moving from right to left are going diagonally across 5b, those facing to the right are walking up the fenceline between 5a and b; there are several calves and Ellie 119 in the corner of 5a still, who hadn't yet worked out that following the others up the fence to the gateway was the way to get where they wanted to go.

We kept watching, willing those last few to move as a group, not leave anyone behind.  Eventually Ellie went and the calves, with a few hesitations, followed her and all of them galloped across the paddock and in to Flat 3 to join everyone else. 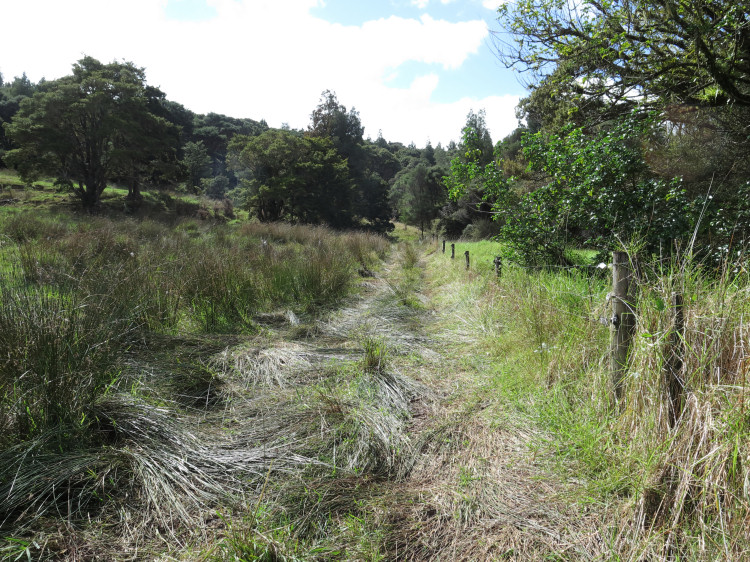 Today I walked down and up through the stream crossing and along here, through the Tank paddock, following the flattened path of the tractor.  About three posts along from here I thought to myself, perhaps this isn't a good idea!  But I really wanted to go and see Stephan, show my support for his continuing hard work, so kept going.

This is the top end boundary between us and Jane's block, once just part of the farm. 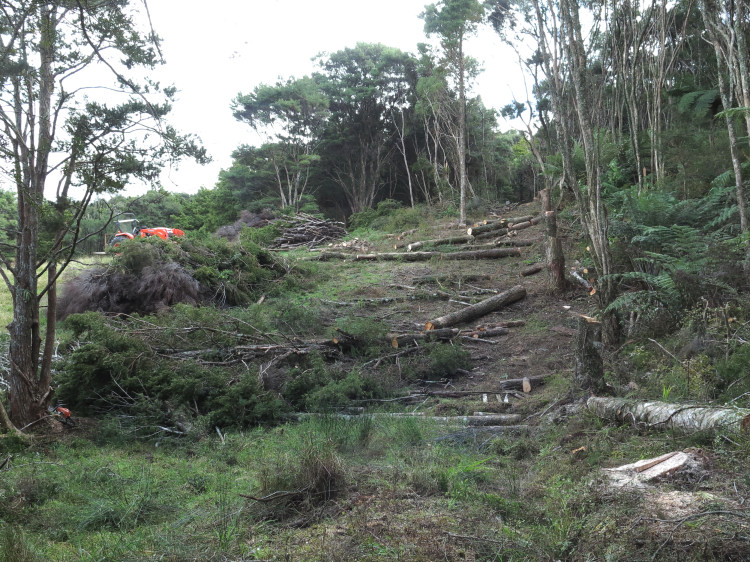 Stephan says he has counted 69 felled large trees, all of whose stumps need to be removed before he can finish clearing the boundary and begin putting posts in.

What a job!  This is unexpectedly tougher than the other section.