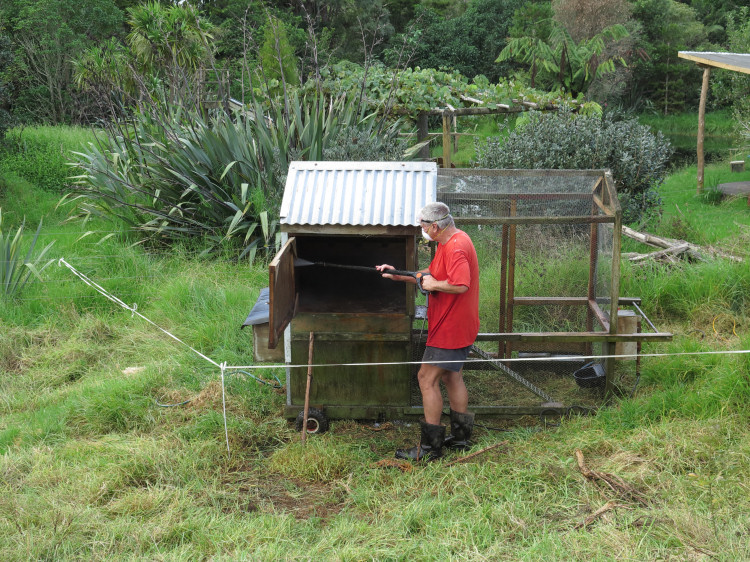 The population of adult hens had reduced to two over recent months - the roosters all went into the freezer and the other old hens were put out of their misery if they became unwell.

The last two were a big black hen who we presumed was laying and eating her own eggs - we knew she was eating them, for certain, presumed they were her own.  Because she wasn't looking very well, she went the way of her sisters and on post-mortem physical exam, Stephan concluded she wasn't the egg layer at all.  Fortunately he started with her and so the other hen was spared for the time being.

Then Stephan gave the hen palace a thorough cleaning with the water-blaster, in preparation for moving the new little pullets, who have also begun to lay, with their mother, to the larger cage.

Monday the 1st of April 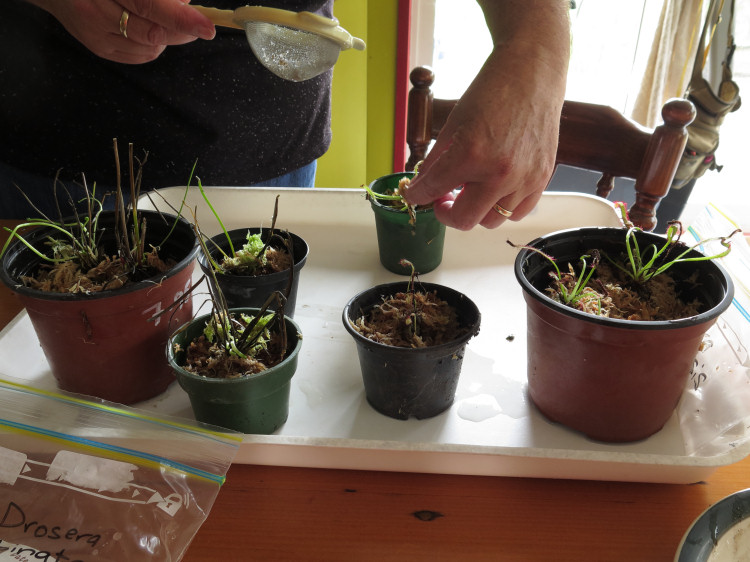 Christina and Emma came out for dinner, bringing with them a small box sent up from Manawatū by Fran and L-J, containing a collection of small, carnivorous plants, along with some sphagnum moss in which to plant them.  This is another "relief package" from my lovely friends, this time for entertainment, rather than nutrition.

We found some small pots in the greenhouse and Christina soaked the sphagnum for me before I potted the little plants and then she cut up a plastic ice-cream container lid to make name markers, since there were four different species.

I tried going off some of the Tramadol today.  Bad move.  By late afternoon when Christina and Emma arrived with dinner to share, I was in a very distressed state.  I'd been distracting myself by various means and hadn't noticed how much pain was building up until something frustrated me and I dissolved in tears.  Back to the heavy drugs: it's obviously not time yet to give them up. 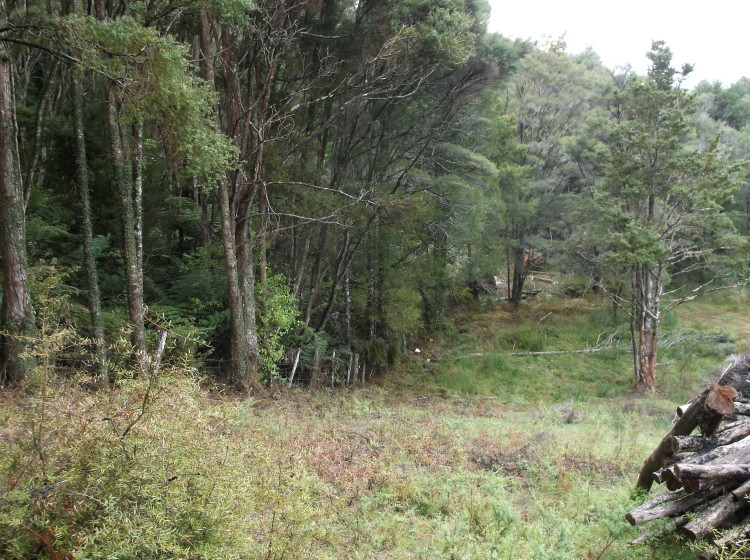 Quite a lot of clearing has already been done on this side of the old boundary fence in the Tank paddock.  Now it is time to begin felling the trees that have grown up through the fence on the boundary. 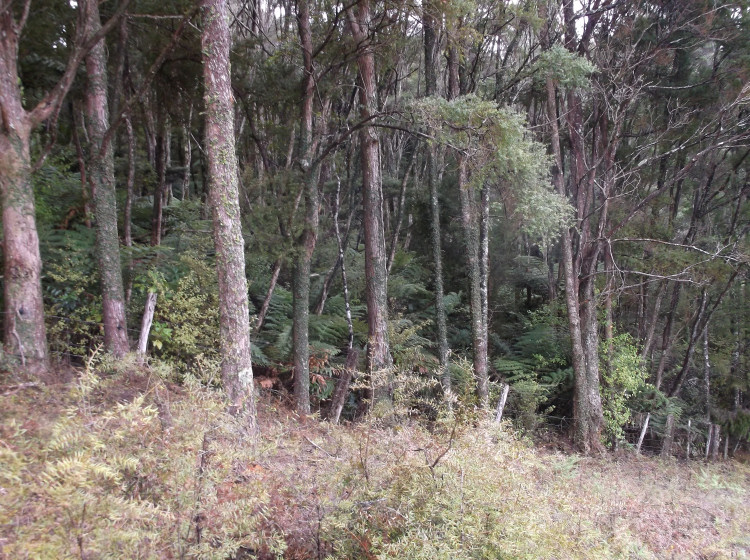 They are numerous and many are large. 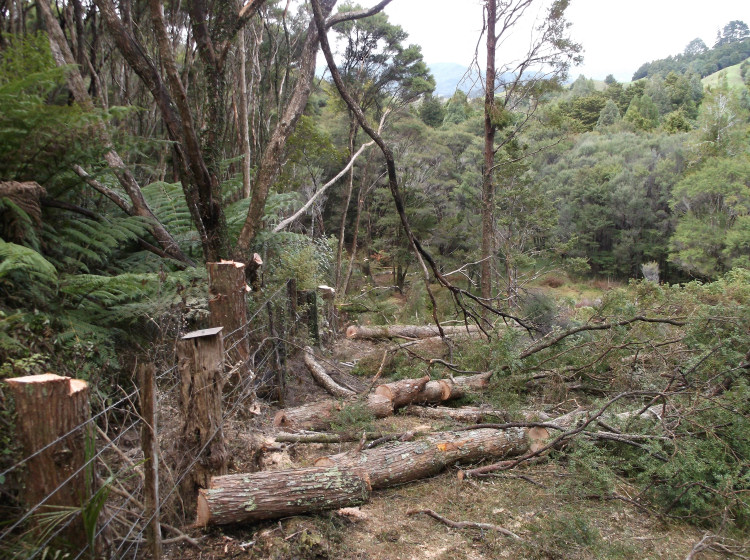 An hour and a half later.

The trees all have to be cut above the level of the fence, since so many of them have fence wire within their trunks.  They cannot be cut at ground level because there's a high risk of catching the chainsaw on unseen wire, the fence being over 70 years old and some old wire having rusted and dropped to the ground. 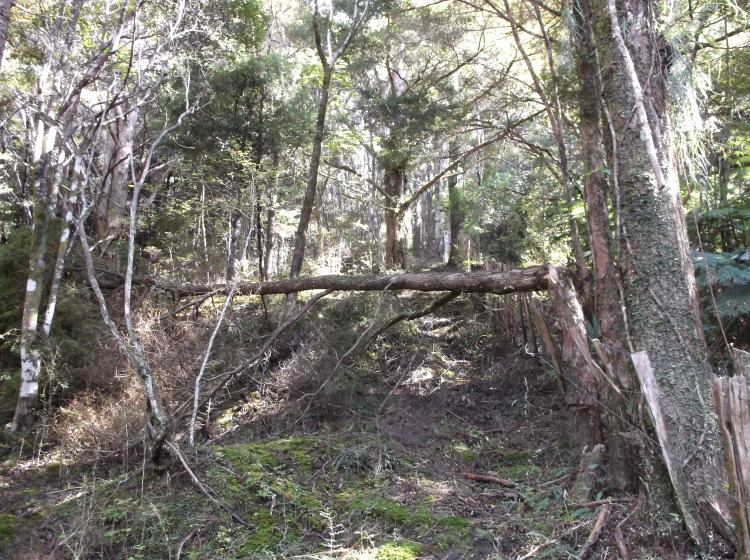 Every tree so felled, unless it falls back the other way into the bush next door, requires cutting up, the trunk either left long for later use as timber, or cut for easy handling to gather for firewood.  The foliage and smaller branches all have to be cut off and stacked out of the way, possibly for later burning, although we more usually just leave such piles to rot down and return to the soil. 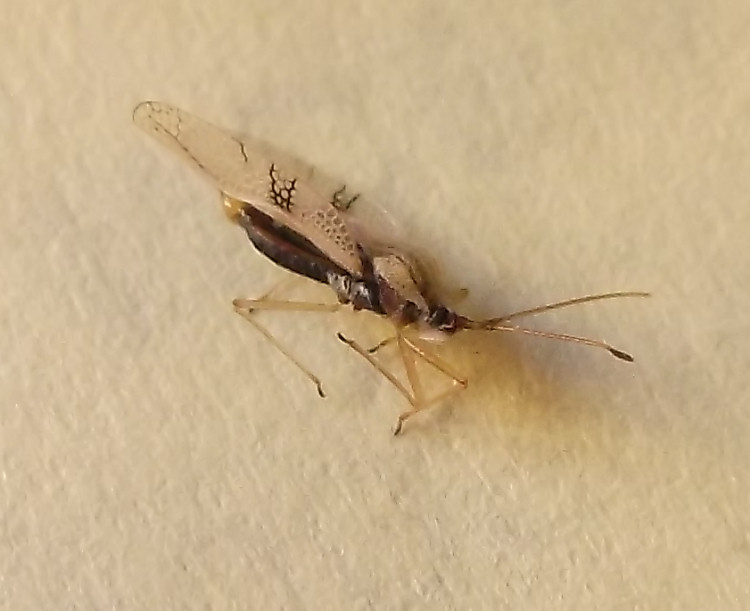 Another interesting insect.  I swatted it away from me and then took its picture with Stephan's camera, which obviously doesn't have such a good macro setting but was to hand as I was uploading the day's pictures to my computer.

The lacy patterns on the wings are pretty and presumably distinctive.  I have dreams, one day, of properly identifying all these creatures.