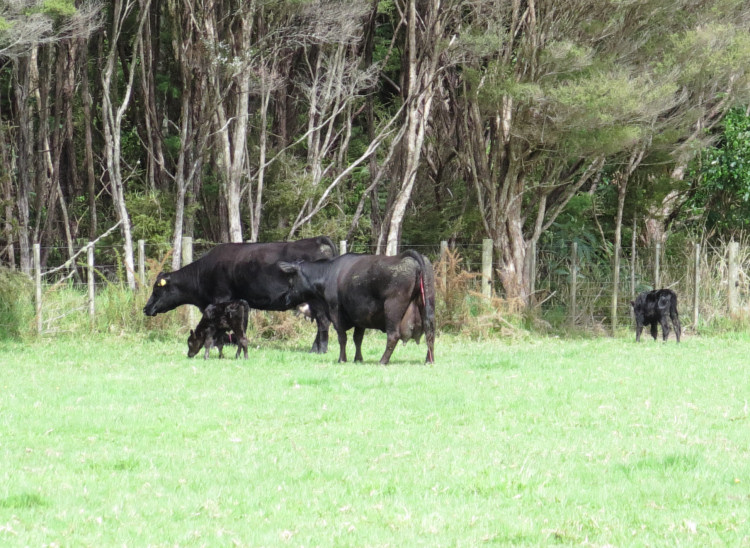 I have no recollection of watching 716's calf being born but there are detailed notes in my notebook, so I must have been watching, although it may have been through binoculars from the track as I was going about my morning check. The heifer calf was born just after 8am.

I also noted that heifer 865 was feeding her calf, always a very satisfying sight. My young mothers are usually exceptionally good at doing what they should with a minimum of fuss. 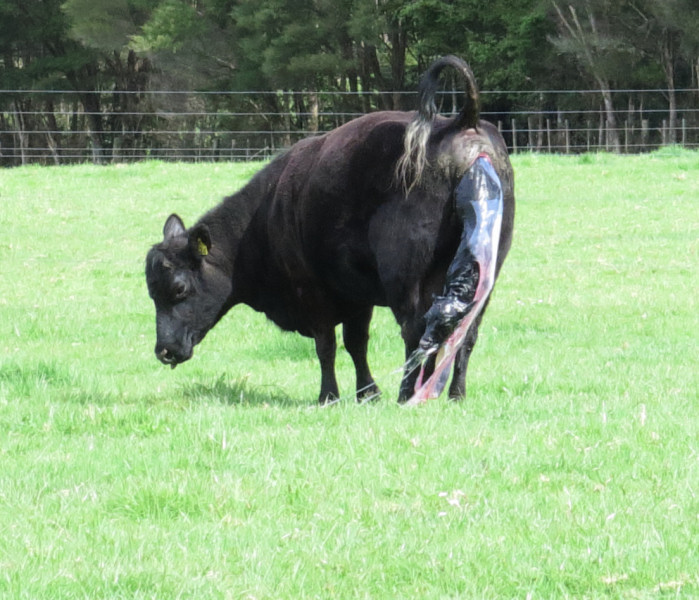 Nothing much was happening other than some mooing and walking around uncomfortably so I continued checking on and moving other animals.

Just before 3pm Fancy produced a membrane bag and Henrietta did the same three quarters of an hour later. Feet were soon visible in both cases.

At five to four Fancy's calf was born... 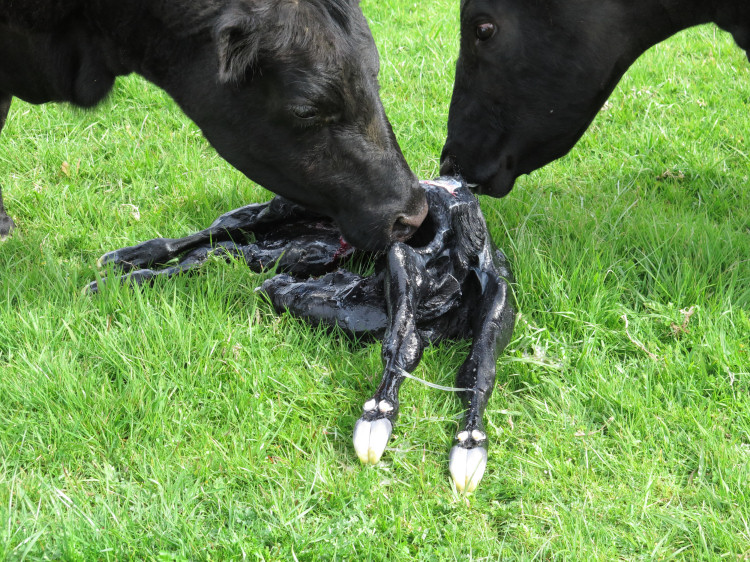 ... and dropped in a twisted heap.

I had to shoo Henrietta out of the way to pull the calf's front legs over so she could breathe easily.

Then Henrietta wouldn't go away and, bearing in mind 813's near-abandonment of her calf on Saturday, I decided preventative caution was in order. 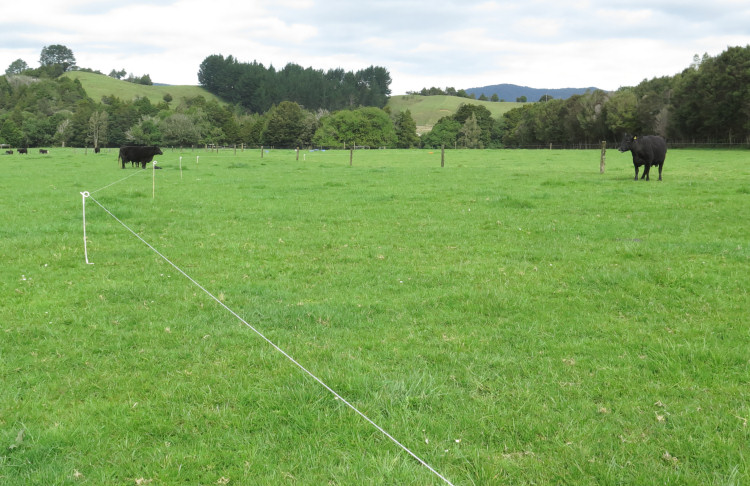 I fetched a reel of tape and some standards and set up a separate area for Henrietta.

Then, Fancy's daughter being on her feet and starting to skip around her mother, I gently herded them away across the paddock, so there was less chance of the new calf getting anywhere near Henrietta. 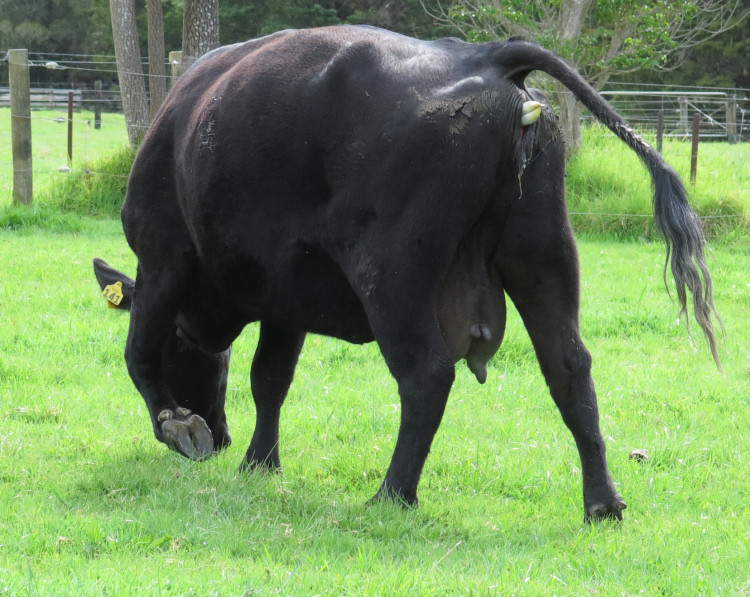 Front feet can be at all sorts of slightly confusing angles but still quite different from upside-down back feet.

The bull calf eventually arrived without any more drama just over an hour later.

They are just visible in the top left of the next picture. 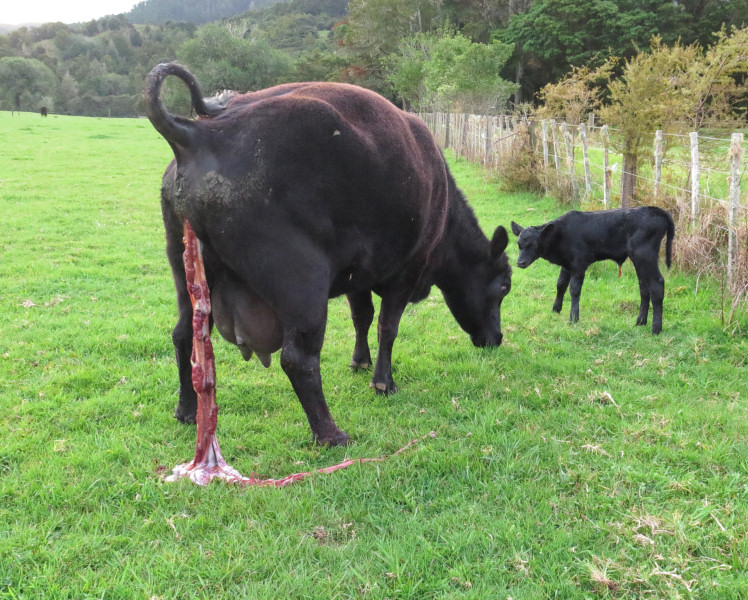 While this might be a challenging picture if you've happened upon it over breakfast, I was celebrating the completion of a successful pregnancy and a live daughter for 126, after last year's sad early loss.

Fancy had been chewing on the string of afterbirth trailing on the ground. As I watched, she pushed and the rest came tumbling out. 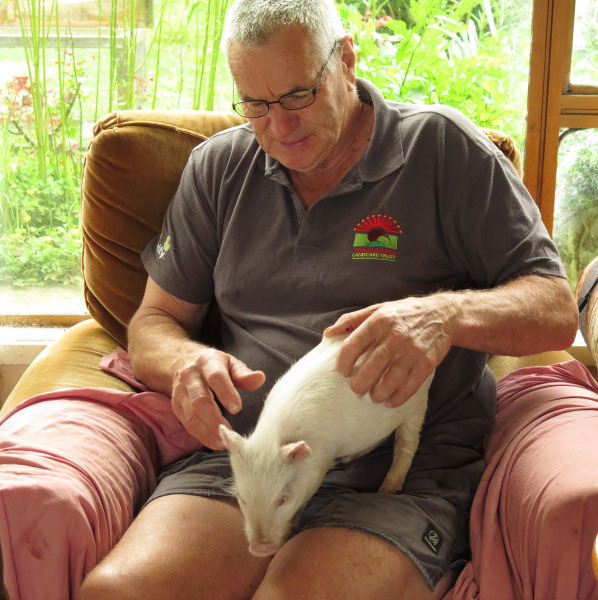 I've been thinking about what could have happened to have left him an orphan. I suspect that dogs belonging to the poaching hunter whose footprint I found out the back the weekend before I found Al's mother, had injured her as she tried to defend her babies and presumably she and the two I found got away while the dogs were busy killing some of the others. That the lower part of her face had rotted away so quickly suggests to me she may have had a fatal infection there. A sow would take on dogs in defence of her young.

Pig hunters have told me they let their dogs kill the smaller pigs. Pig hunting with dogs is a brutal "sport" we ceased facilitating when we learnt such things about local practises. The feral pigs are a dreadful pest but no animal should be deliberately subjected to that sort of careless and inhumane treatment. 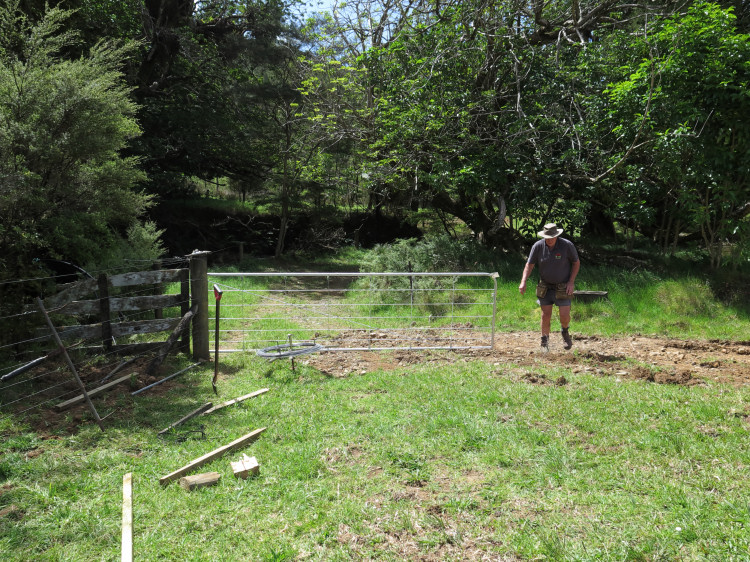 We're still not entirely sure how we'll finish off the area around the yards but some parts don't have many options, like the gateway down to the crossing to the Tank paddock. 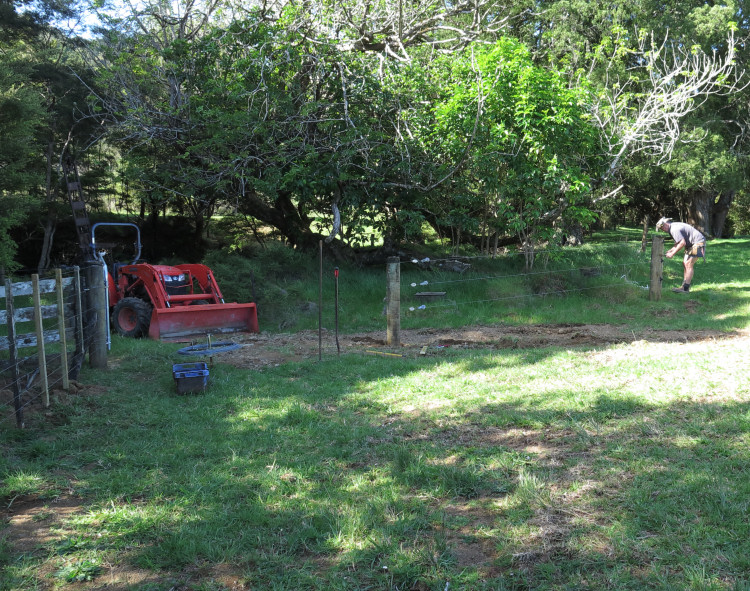 It'll be nice to have this all tidied up; I've been stringing tapes around the place for months as the yards (to the right of the picture) have been being built. 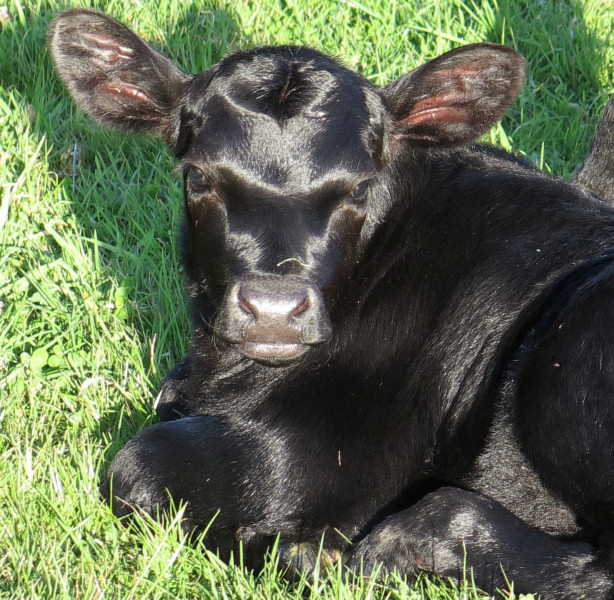 Fancy 126's daughter in the sunshine. Her sire is Ayrvale Bartel E7. 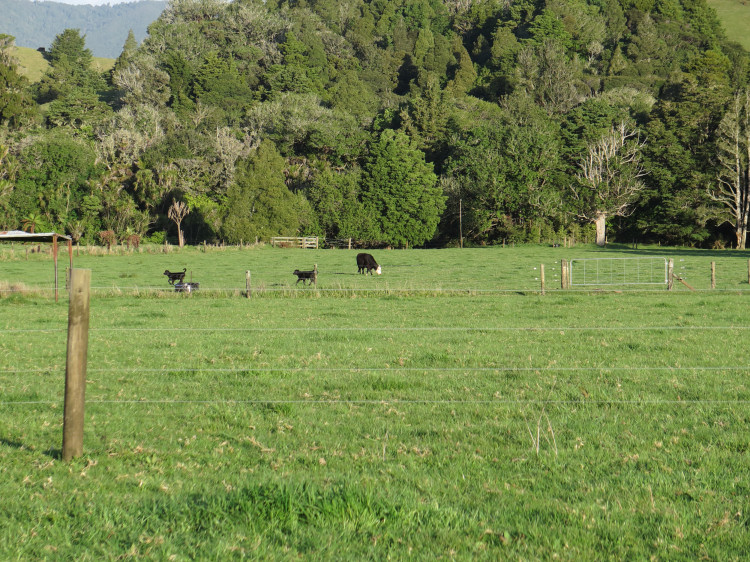 At ten to seven in the last of the sunshine, the calves in Flat 2 were hooning around with each other.

Unfortunately it wasn't the only hooning going on: a few minutes later, some young idiots came roaring up the valley in a loud car, skidding around the sharp corners between here and the paddocks Over the Road, then I could hear them roaring all the way up the valley. The most-recently-calved mothers all ran in alarm to their calves. 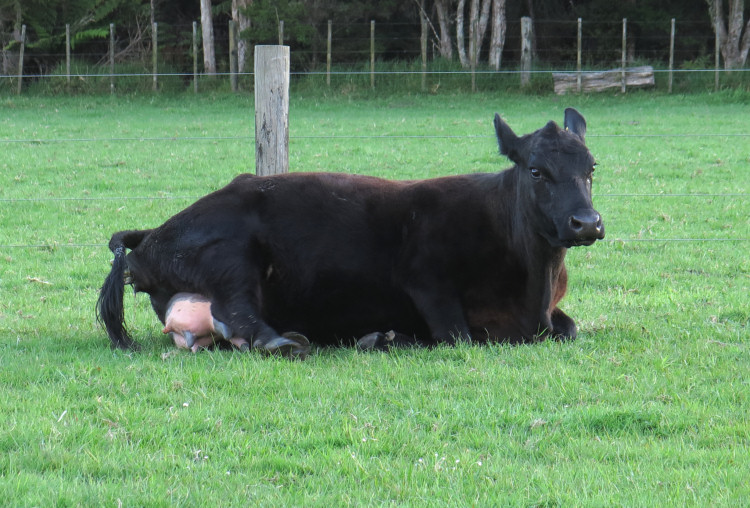 It didn't do much for Imogen either, in the middle of calving.

At this point, knowing she was doing fine and hearing the idiots on their way back down the valley, I went out to the front gates to see who was behaving so damned dangerously.

We later saw the unregistered, broken-windowed car parked down the road; it belongs to some young men whose childhood we had a lot to do with at one stage, who are now out endangering people's lives! Good one, boys.

Stephan had gone down the road to drop some milk off for Aaron's pigs and I was very glad that he'd come back in the gate just before the idiots came past and continued sideways around the next corners.

I posted a photograph on a social media page, asking if anyone else had seen the car, which may have been seen by the driver. I have not told the authorities where the car is, yet; but if I see it again on the road, I most certainly will. That sort of idiocy can have horrible consequences and even if it's only ultimately for the idiots in the car, it'll still affect other people a great deal, family, emergency workers, the wider community.

When I got back to Imogen, she had produced a little heifer calf. 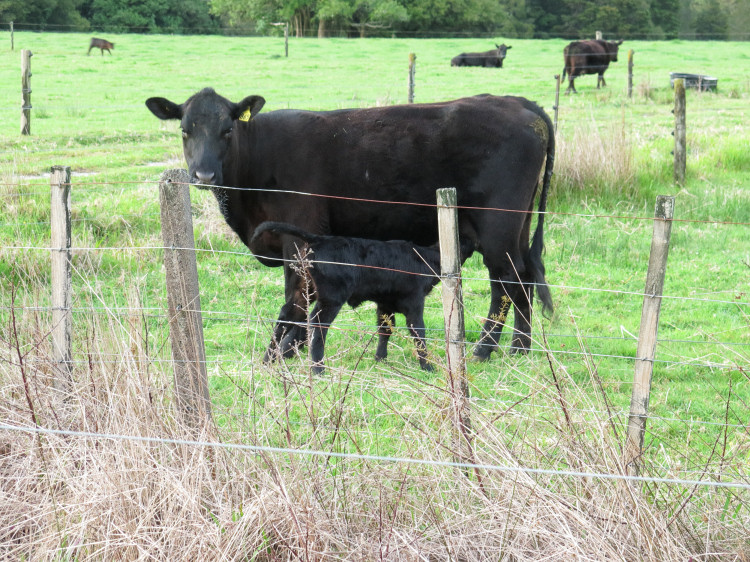 A two-year-old heifer feeding her calf is the best sight. 865 herself seems barely more than a baby but here she is with her own, doing all the things she should.

I had a lovely message from Wayne, who's been reading the website since 2006, expressing his delight in reading about 865 in the previous page, a heifer whose birth he'd doubtless read about and here she now was, calving. I'm regularly struck by the same realisation, that I've watched the entire life progress of these animals, from the hopeful moments of conception, through the months of unknowing as I await their births, animals that might be male and here for only their calf-hood, or female with the chance of staying here for far longer, taking their own turn in growing the bovine family tree.

I remember 865's first day in Flat 1, when I stayed away as much as I could because she seemed to be another of 745's excitable calves and I wanted her to be calm. I hoped she might settle down, being a daughter of Harry whose own parents had high "docility" EBV scores, even though he at that stage did not.

Over the months after weaning I gradually got closer to her as I introduced the delight of tail scratching to the yearling heifers and 865 has ended up being the quietest of them all, now regularly seeking and enjoying a head scratch.

Sometimes I "drop the ball" and forget to do something important.

Within a few hours of every calf's birth, I try to see them feeding, or find evidence that they have, either by udder inspection and seeing suckled teats or an uneven udder indicating that milk has been extracted, or by noting yellow poo from the calf. But somehow in the activity of the last couple of days, I lost track of 716 and her daughter. 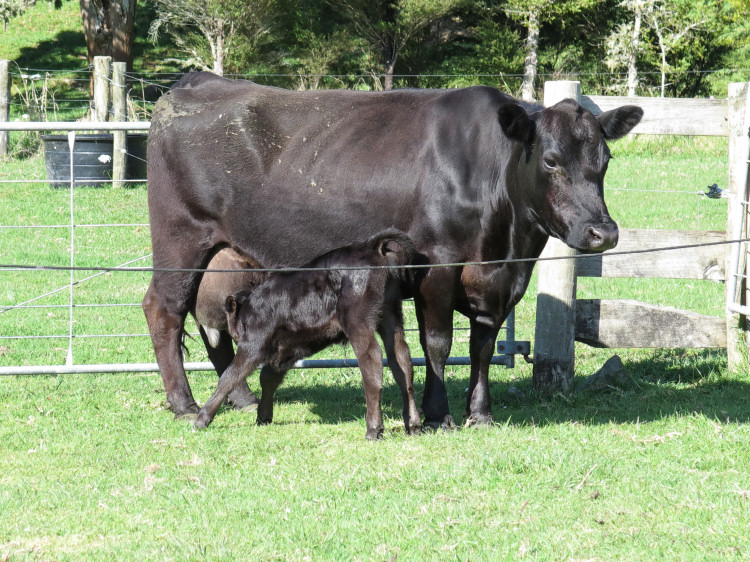 This morning as I went along the lane to check on everyone I found her wandering slowly and with a slight wobble, calling like a hungry calf and looking very hollow. I think she had not fed!

I thought, because my recollection was muddled, that the only heifer calf amongst the three in Flat 5b and c with cows 716, 742 and 792 belonged to 742: I had forgotten that 716 had one too, so I spent the next few minutes trying to return the hungry calf to 742 who seemed interested but more so in another calf who'd gone through the fence. Eventually I consulted the right bit of my notebook and stopped trying to confuse everyone.

But the calf had gone past it, didn't know what to do and 716 wouldn't stand still so I could help the calf get a feed.

I went home, thawed and warmed some colostrum and returned with the feeding bottle and Stephan to herd cow and calf into a small area where I could firstly feed the calf to reinvigorate her and then she enthusiastically hunted for and found a teat.

Stephan gave her some more in the evening to help her again and she needed another prompting small feed in the morning when I was also not here. Sometimes they require a little taste of what they need, to trigger their own desire to find it for themselves. 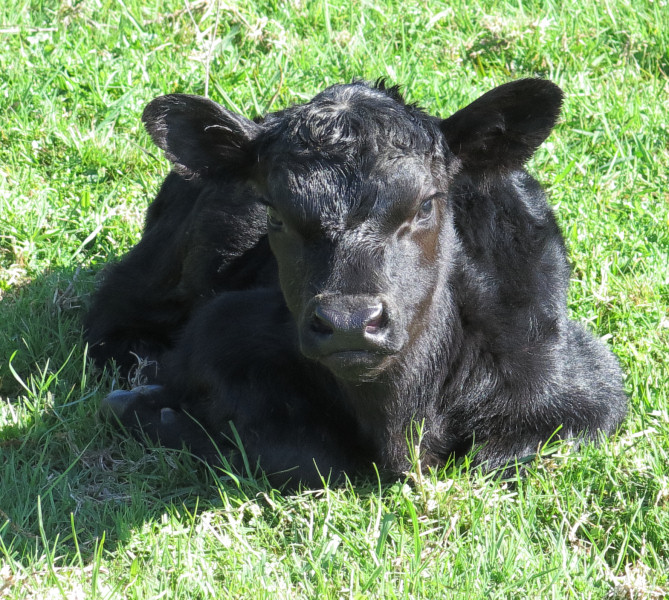 Imogen's calf, sitting just through the fence from her.

I wonder how this one will turn out? She's had a mixed record so far. This is number four for her. 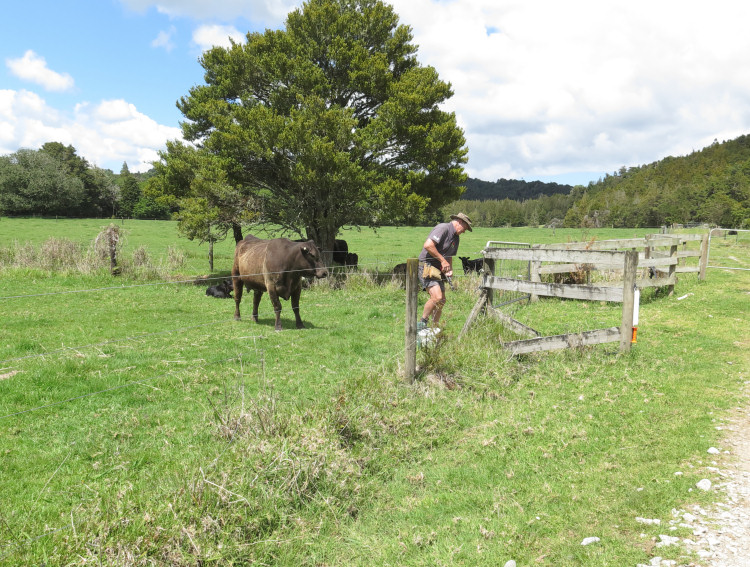 When we were dealing with 716's calf, we discussed the difficulty the little calves have with the bottom fence wire when they end up on the wrong side and are trying to get back to their mothers in their first day or so of life.

The third wire down is high enough that the calves can easily move under it when they're tiny but the bottom one always trips them up and sometimes they'll hurtle through and can be flipped right over. It never looks safe.

Stephan has already removed the bottom (fifth) wires we had across the flats for the sheep. There really isn't any reason for a fourth wire on any of these fences; two would be sufficient for the adults and the third will eventually keep the calves in when they're a bit bigger and learn about electric fencing.

Stephan spent the rest of the day removing the fourth wire from all the flats fences and rearranging the electric feeds so that now only the top wire on all the fences will be permanently hot and the second and third wires can be off during calving. I'll turn them back on when all the calves have been born and are stably on their feet. 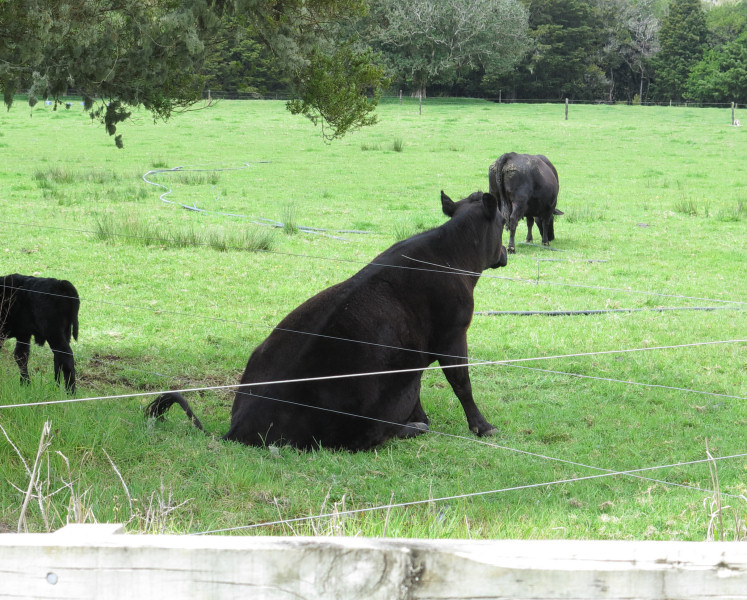 Just beyond Stephan in the picture above, 710 decided to get up from her lie-down and stopped half-way, as she (and only she in the herd) often does.

She had a bit of a jiggle on the way up which may have been a nether-regions itch, or she just wasn't quite able to do it all in one go.

I took a couple of pictures of Glia in early labour just after 1pm but oddly have no more of her as she calved this afternoon. Stephan and I were having silly conversations about what kind of calf it was going to be and I was busily trying to write something in preparation for another weekend session at Te Wānanga, popping to the back door every few minutes to check on her progress through the binoculars. She kept lying down facing me so I couldn't see what was going on at her rear. Stephan said the calf would be a grey heifer; it was a black bull. As with her lovely mother, 607, it looks like I'll be waiting a while for a daughter. 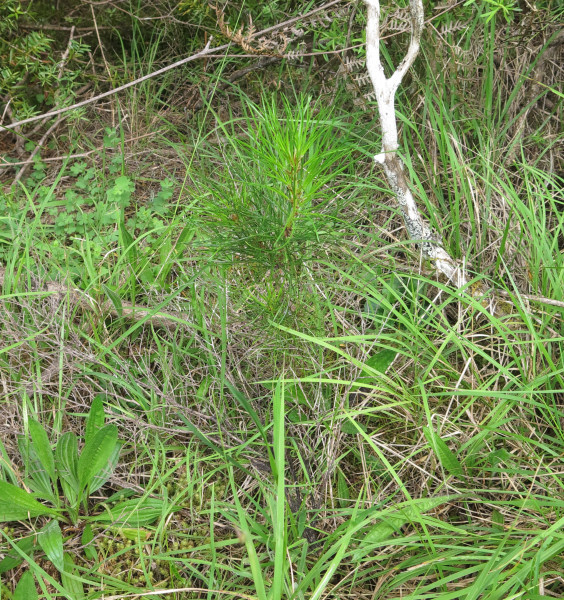 I spotted this "wild" Pine seedling in the stream reserve on the way down the track from the Back Barn.

If it had been growing out in the open, it might have made a good Xmas tree - actually now I think of it, it could have made quite a good against-the-wall one here too, growing in front of other trees; but it won't now because I pulled it out.

And then I abandoned my duties and went to town to the first part of the weekend's course, fortunately starting at 6pm instead of 5pm, or I'd have been very hurried or quite late.