The week beginning the 1st of August 2020.
Saturday the 1st

I went to a genealogy meeting today. I thought I might find out if there were things I hadn't discovered on my own, about finding ancient relations. They were a lovely group of people and I brought home a few CDs of records the Society had for loan to members.

While I was out, Stephan had been working with neighbour Aaron down the road, trying something that might help work out whether the ominous new noise our ute is making is terminal. 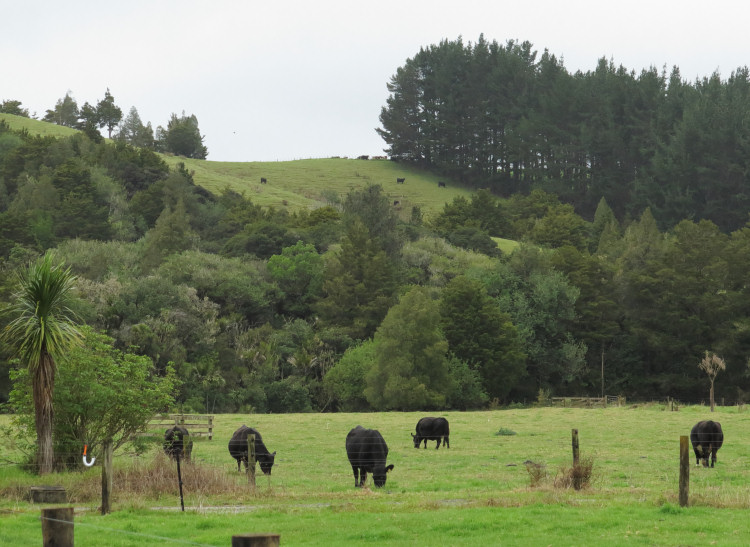 When I see cattle on the ridge Over the Road, at the top of the neighbouring property, I am so very glad we put in the extra, internal boundary fence to stop any of them having contact with any of ours.

Kees and Lynn came for dinner, a delicious mutton roast we wanted to share with them. I gave Lynn the pair of gloves I'd promised her at her birthday lunch last September. I figured she'd better have them before winter gets cold, if it's ever going to.

811 adopting the threat pose as Stephan and I walked up the Spring hill toward her. I really don't know why my cows do this to us, except perhaps they all have the same kind of sense of humour I do. I think they're very funny and tell them so.

It's a scary look and should be taken seriously and I would, if I didn't know my own cattle well. 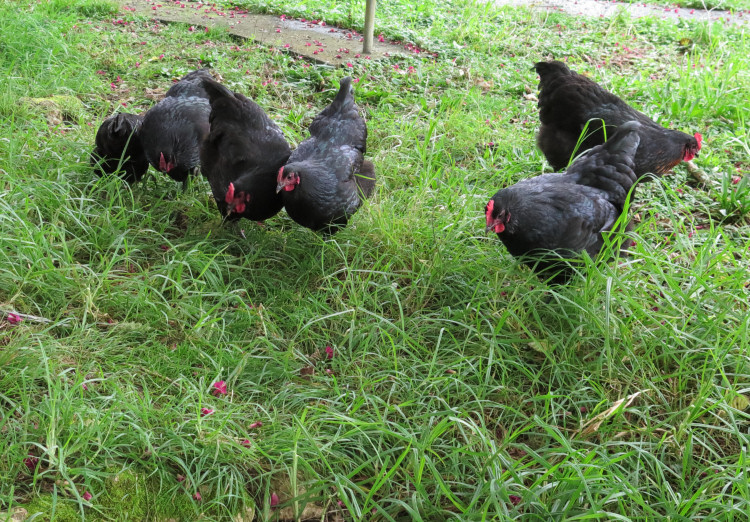 The five young hens are beautiful, much larger than their adoptive mother, the hen at the far left.

They now lay us five beautiful eggs most days.

The time is nigh for these two. They are beautiful pigs and with equally nice temperament, they are two of the nicer pigs we've raised.

But they're ready for slaughter and we need to dry Zella off for the season. We've kept her milking a little longer than usual, to keep feeding the pigs until they were finished.

The pigs were to be done today but as Aaron, who was going to come and help and learn was sick, Stephan put it off until tomorrow and went up to the yards instead. 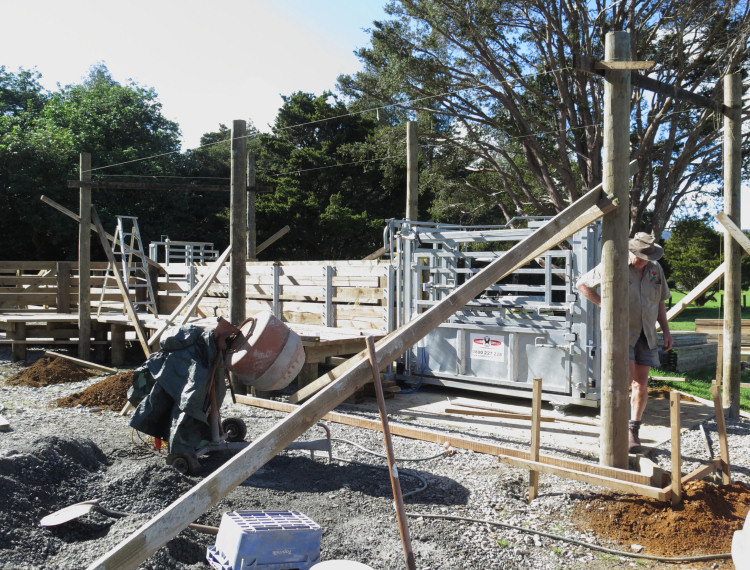 This next part of the yards construction began about three weeks ago, when the materials arrived.

Stephan, with help at various times from Andrew, Mathew and Gary, concreted in the six long poles and was today preparing to cut off their tops at the required heights. 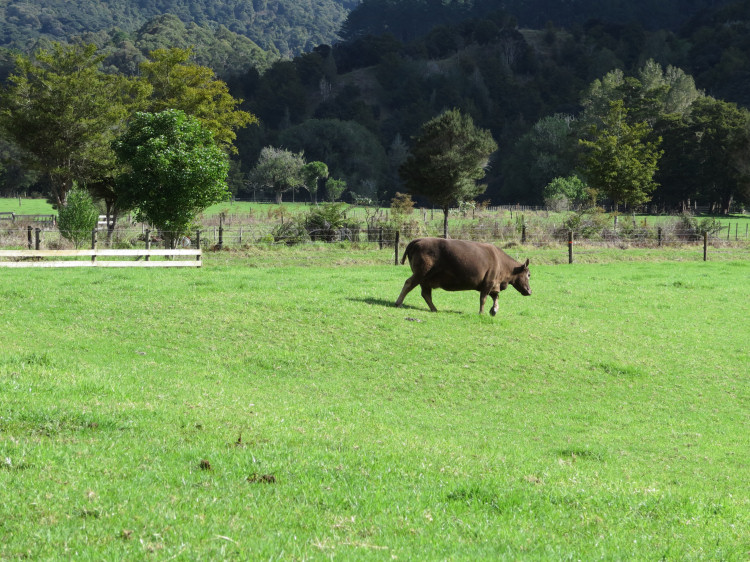 While making butter I looked up and saw Glia bouncing around the paddock. She'd suddenly run, then turn and kick her hind legs out and off she'd go in the other direction. Goodness knows what set her off; the joy of Spring, perhaps.

The day was fine and warm. I heard a Riroriro for the first time, a sure sign of spring, and a Skylark was trilling happily in the blue sky. 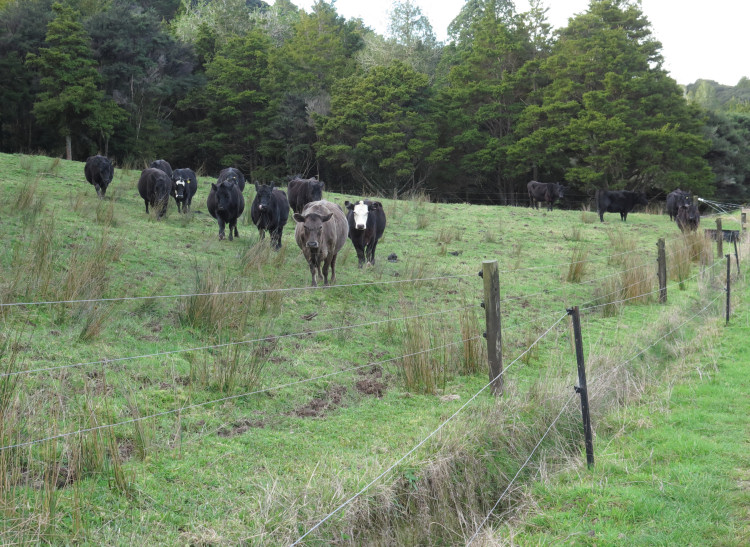 Sixteen cows, starting to follow me along the bottom of the Small Hill paddock, happy to be going to their next paddock.

I noted the beginnings of udder development in many of them, a small but noticeable increase in the bulk of the formerly-slack udder tissue. 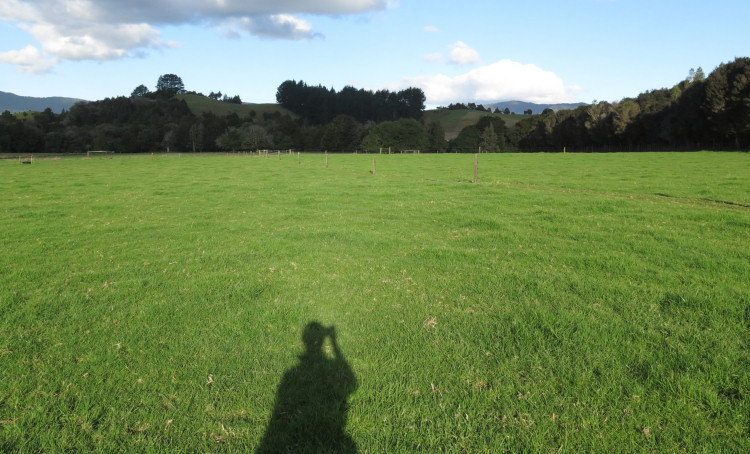 The farm is looking extraordinarily green for early August. Usually this is our most difficult time of year, when the cattle have eaten all the grass and there's barely any growing.

This year it hasn't stopped and so while I have to restrict them a little, as above, moving them around this year is actually to paddocks with growing grass, rather than only a change of view. 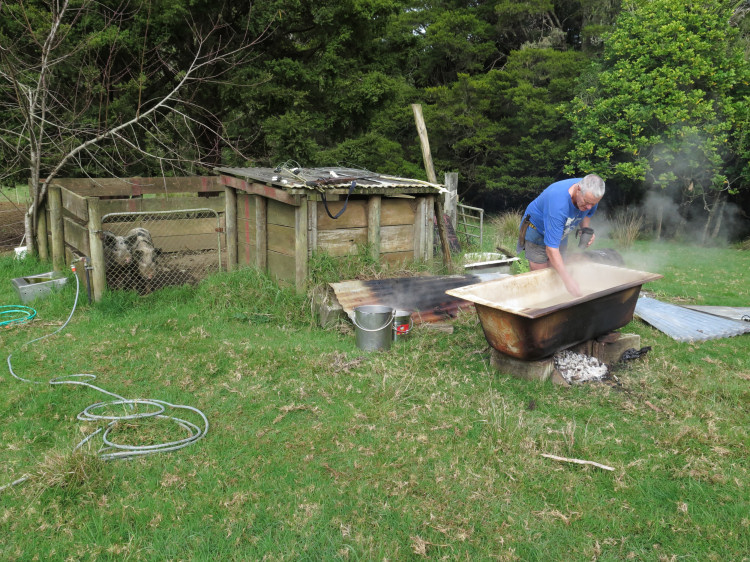 Today's the day for the pigs.

Stephan took some hot coals from last night's fire to help start his own fire underneath the bath this morning. Usually he makes a fire under a separate drum of water but having done it this way for Aaron's pig a couple of weeks ago, he decided he'd do it for ours too, so the water won't lose heat in the transfer from drum to bath. I'm not sure the bath's enamel will survive the fire's heat but this is the bath's only use these days so it doesn't matter much.

Aaron still wasn't well enough to help so Stephan and I did the job together; mostly Stephan but it's easier with someone else to manoeuvre the tractor and help with some of the scraping to remove the pigs' hair. They both came up well and we wrapped them in bedsheets and then in a cover on the back of the ute and Stephan took them away to the butcher, to be made into bacon and hams.

It's hard to kill tame pigs - hard in one's mind. But I'm still 'happier' being involved in this whole process and being a meat eater, than I would be living in town and having no connection to the meat I like to eat. These pigs had one tough day in their lives here. Pigs in commercial systems have quite different lives. Imported pork is a nightmarish other story; who knows what they might have had to live through? 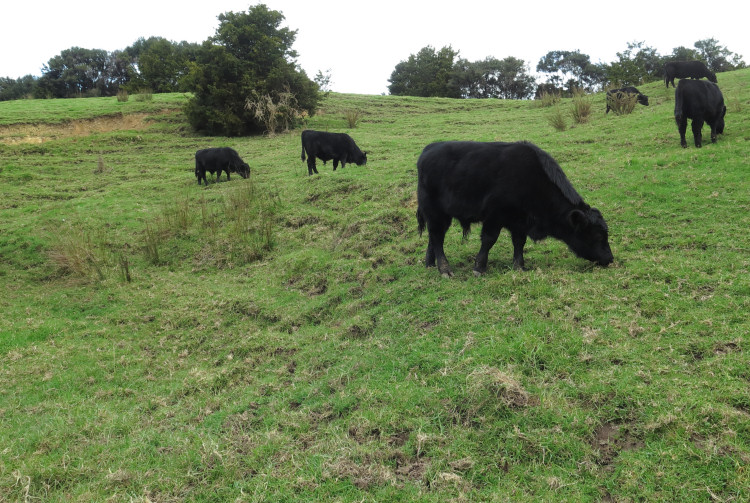 Checking the bulls and the R4 heifers in the Spring paddock, Andrew in the foreground.

The slip is progressively slumping as soil is carried out from deep beneath the hillside. It's interesting watching bulges appear as the earth folds over itself as it gradually moves down hill.

I began planning a holiday! When Zella is not milking, we can potentially get away for a few days, with the help of friends to visit those animals and birds who need feeding, checking or moving. 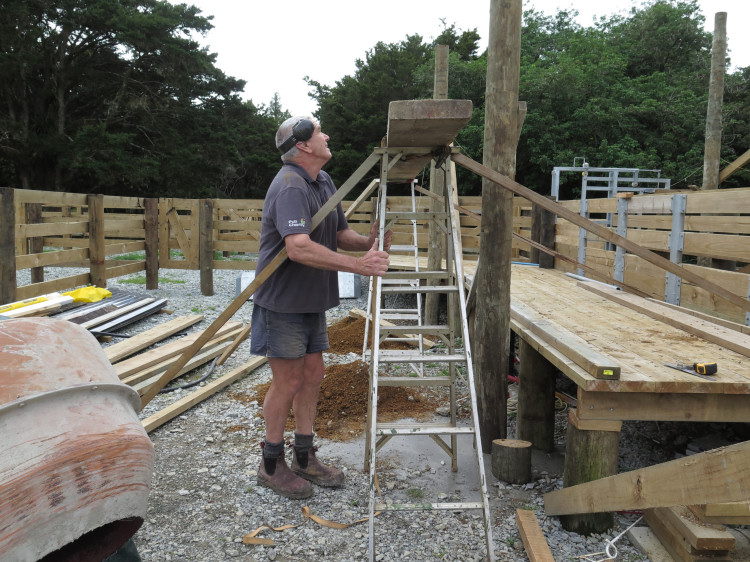 More preparation for roof construction today, Stephan here adjusting his platform before cutting the slots out of the tops of the poles ready for the roof beams to go up. 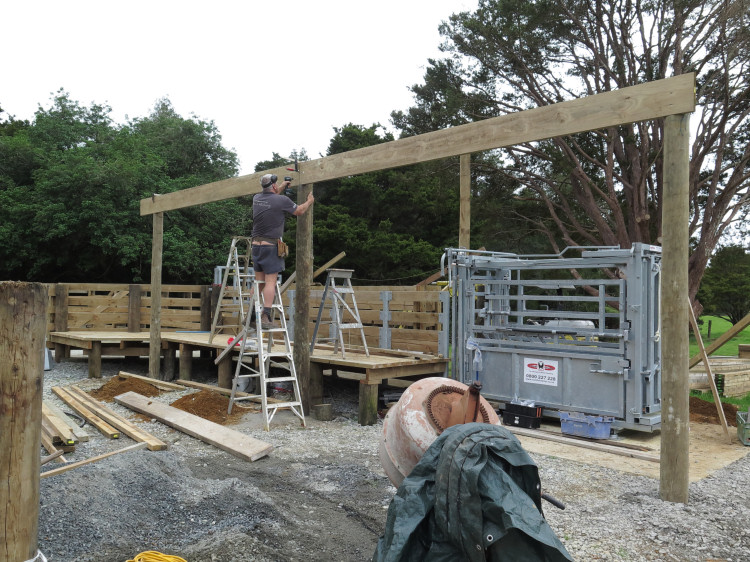 We got the first two up without either of us falling off anything and Stephan screwed them in place. He'll bolt them on properly later. 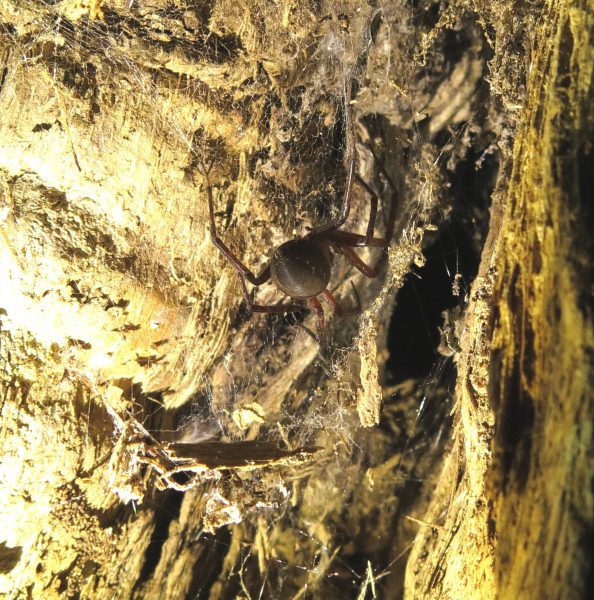 In the Kingfisher nest hole I noticed this fabulous Sheet-web spider.

We once had one in our bathroom for several months.

A Banded Tunnelweb spider out for a stroll on a nice evening.

I've read that the males go looking for a mate and sometimes end up inside houses, often tucked away under a cushion, causing arachnophobic people conniptions! They are a significantly sized spider.

We had arranged to have a comfortable but dilapidated two-seater couch recovered. It was one we'd got from Jill many years ago, when she moved out of her Kohukohu cottage and its covering had suffered much deterioration by sunlight, as well as repeated attacks by cats in earlier years, stretching their claws on its upholstery and it was now in tatters.

We decided there was more value in having a soundly-made but poorly-covered item re-covered, than in throwing it out and buying something that might be less sturdily constructed and potentially have equally unsuitable material covering.

Early last week we'd brought several fabric samples home with their ranges of colours, to see which would best fit in with our current colour scheme. As you may have noticed in occasional photos of the inside of our house, we are not surrounded by neutral colours. We could easily have gone with a light colour and not caused visual offence but that didn't seem sensible in our environment. Therefore we had to match the dark blue-black of the floor, or the deep red of our doors, windowsills and skirtings. The blue looked horrible but the red looked like it would do the trick, as long as we chose the right red.

Today the couch was ready to be collected, and it being a lovely fine morning, we set off to town to get it, along with some other supplies we needed.

By the time we'd done the other things, clouds were gathering and as we drove in to the upholstery place, spits of rain were falling. But it didn't look too terrible and Stephan had purchased a good waterproof cover to transport the couch home, so we thought we'd risk it.

Part-way home the rain pelted down for a short distance, then we were out of it again. At home we unloaded the couch, still covered, onto the deck, but then had to leave it covered while this happened: torrential rain, then hail!

A bit later on, when the rain stopped, we brought the couch inside with only a small wet patch near the bottom of one side, which soon dried. Its colour is near enough to perfect.