This morning I packed up and left Sue and Trevor.
I had to discard my bottle of Zella's milk, which had finally passed the point of safe enjoyment after a week in and out of the chilli-bin and other people's fridges. The butter though, was still in excellent condition. I was sharing it with anyone who wished to partake of it, although most of my hosts weren't keen. There's something funny about milk products straight from the cow, when you're not accustomed to them - not the taste, but the thought of there not being all those reassuring manufacturing processes along the way. Personally I prefer not to have to think about consuming the stress of commercially-farmed dairy cows, having seen far too much of how they're treated on too many farms.

I travelled north east for 25 minutes to go and see Fran and L-J, who'd put their huge bouncy dog in a crate and instructed the other even larger dog to stay on her couch while I was there. L-J was going to send me off with a box full of carnivorous plants but we decided I should pick them up on the way home, so they didn't inadvertently die before I got them home to kill them, which is what would probably happen. I don't seem to have done very well with them at all, over the last couple of years! L-J suggested I may not have grasped how wet they need to be kept, at all times.

From there I turned south again and, when I got near Ōtaki at about cup-of-tea time, I stopped and phoned Renée, to see if she was at home for a visit. What a delight! I was only there for about an hour but we had a great time, talked about all sorts of things. It was lovely to see Renée where she lives and writes and to be in her presence again. My plan was to visit both on the way down and on the way back home again and maybe sometime in between as well.

From Ōtaki I continued south to Paraparaumu, to the home of Kay and Hallam, with whom Stephan and I had lunch in Kerikeri last year, after our previous holiday plans came to nothing.

I arrived in time for dinner, after which Hallam suggested that I would enjoy sitting down to watch a game of rugby with them on the television. That wasn't going to happen! Legalised thuggery, my father used to call it. 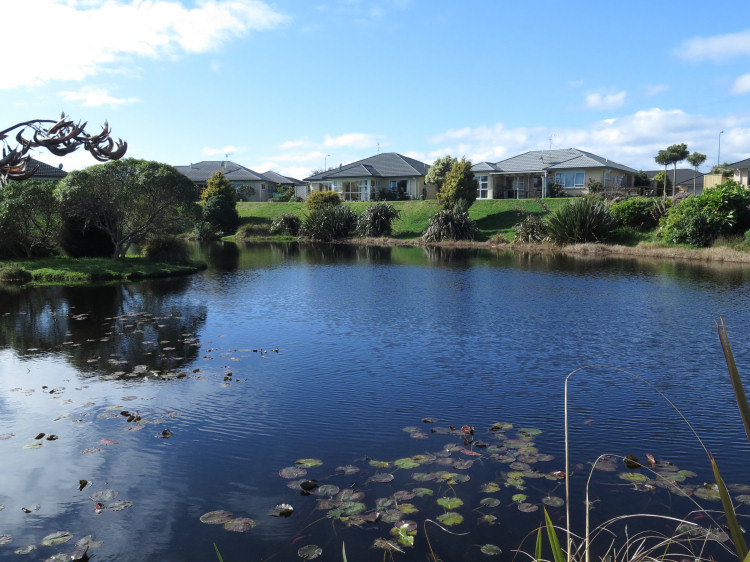 Kay and Hallam live in a retirement village, in manicured grounds with lovely ponds and pleasant pathways to walk around. 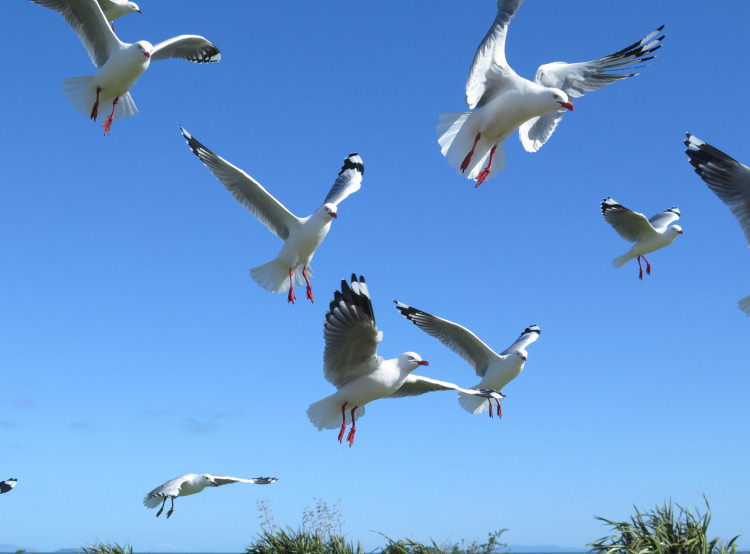 At lunch time we went to Raumati Beach and had fish and chips, watching children chasing the gulls who were watching the people with the chips, waiting expectantly for those bits that would inevitably be thrown to them from the picnic tables. 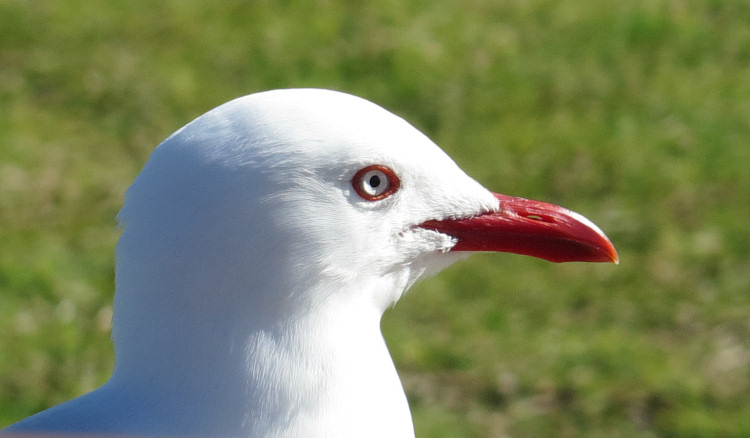 This one perched on the seat on the other side of our table. 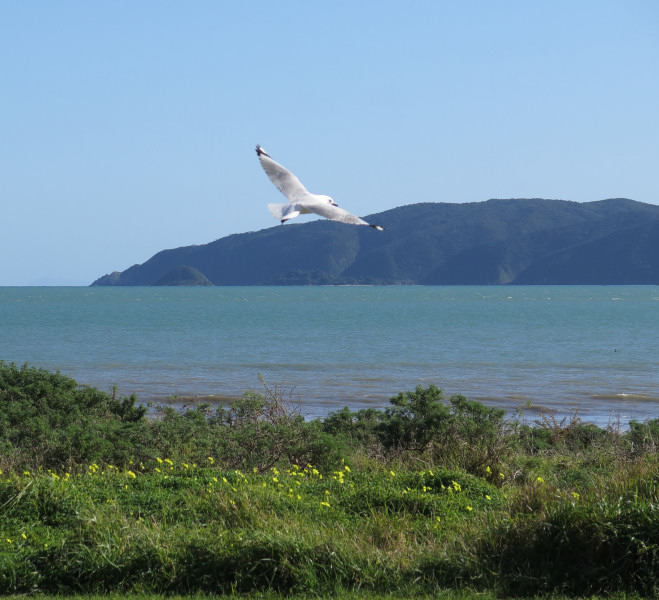 Kāpiti island is the main feature of the view from this part of the coast.

Kay told me there are trips out to the island for small numbers of people and I thought I might investigate that for the days I intend spending here on my way north again.

In the evening we travelled down to Petone to have dinner with Kay and Hallam's daughter and her son, for his 18th birthday. We must have met when we were children but at least 45 years have passed since then!

During the afternoon I'd felt some slight irritation in my throat, but put it down to the incense Hallam had been burning; later on I realised it was something far more unpleasant, that I was becoming unwell. That was not part of my plan; indeed it was very much what I had intended to avoid by travelling by road in my own vehicle, rather than on public transport with a lot of other people. I needed to be well to visit my aunt in Wellington, the aunt from whom I'd received Foxton Beach kitten all those years ago and with whom I'd lost touch ever since.

Feeling grotty, I packed the ute to continue south this morning. I had been in contact with Char-Lien in the last couple of days to check on her health (for her own sake because she'd been unwell in the previous couple of weeks but also because I was trying not to catch anything that might prevent me from continuing with my travel plans), but now I had to tell her I was ill. She very graciously confirmed her invitation. 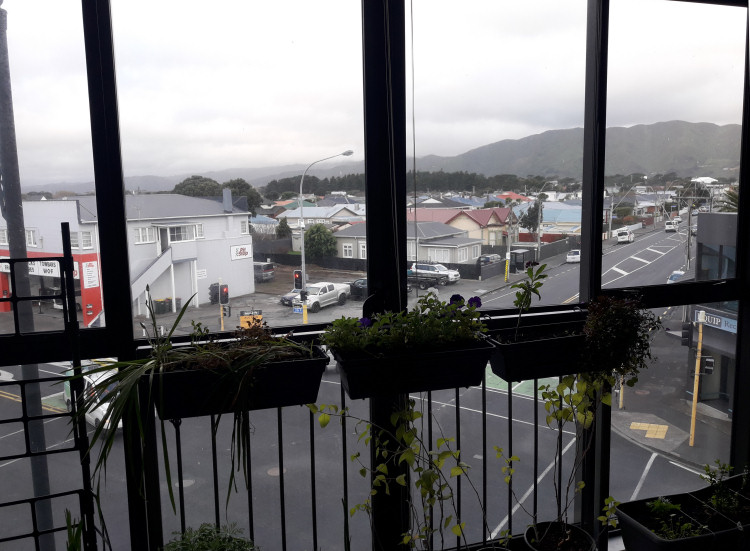 This was the view from my bedroom! Char-Lien and Jonathan bought this apartment a few years ago and if the weather were clear Char-Lien said that I would see the mountains!

I carried on getting sicker.

I woke at about 5am and thought, if I went and got a Covid test today and then got better enough over the next two or three days, I could still catch my flight to the Family History Expo in Christchurch. So I phoned the Healthline number and had a nice chat with a friendly woman who told me where the nearest testing place was, to make a booking when they opened at 9am.

Char-Lien went off to work and I drove a few kilometres up the road in pouring rain, to a Covid testing station. The woman who took my swab wasn't wearing a face shield and then she leaned her elbows on my window sill and chatted to me about knitting, since my nice wool was visible behind my seat. I was disconcerted, thinking, you'll be sorry if my test comes back positive! Later I thought, I could have caught it from her!

I went home and then news started to filter through about a positive case up in the Coromandel, then the news about an official announcement at six o-clock... 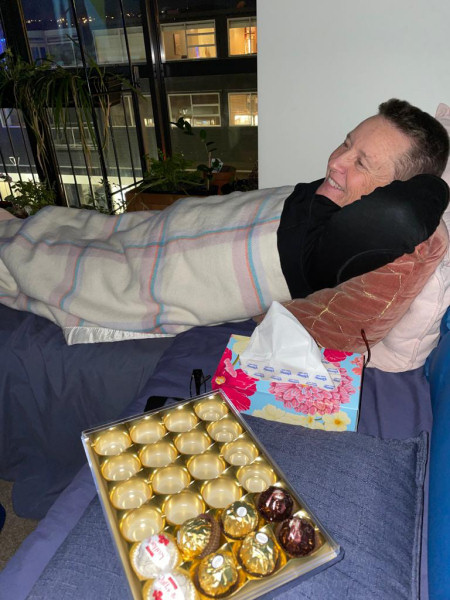 Char-Lien provided all the necessary comforts and frequently commented on my good humour while ill. I figured there wasn't really any point in anything else, since I couldn't change my condition.

I had not eaten all those chocolates! Those spaces were already there when the box was placed beside me. 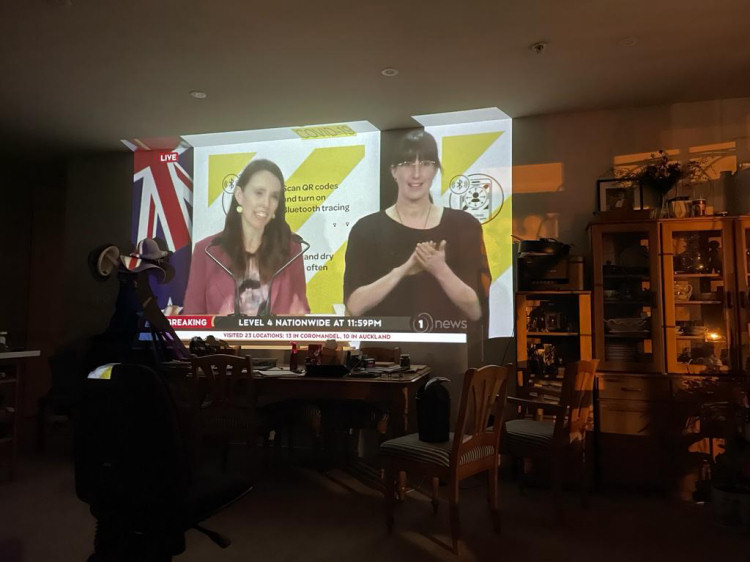 Char-Lien set up her projector so we could watch a larger-than-life Jacinda on the wall; and so we watched the Prime Minister and the NZ Sign interpreter and lovely Dr Ashley, telling us what they knew about the Covid cases and places of concern around Coromandel and Auckland.

Back to level four lock-down from midnight. Anyone who is away from home has 48 hours to get back to where they need to be.

I felt far better about being ill now that nothing I'd come so far to do was possible any more. But I was still very unwell so couldn't do anything anyway. 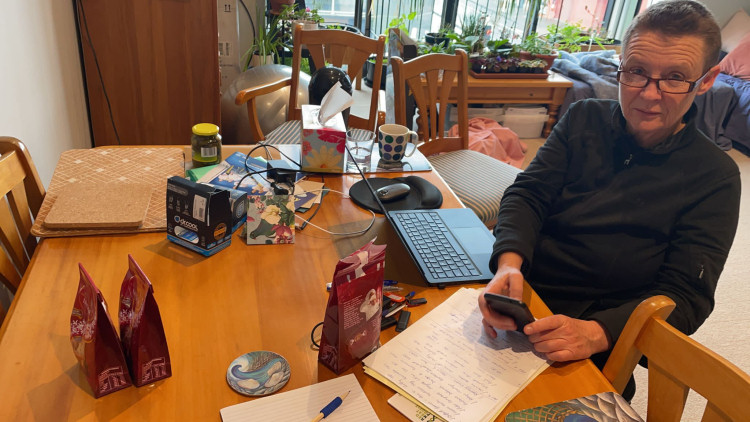 I had brought all sorts of 'things to do' for the evenings Char-Lien had said she'd be out, so got on with some more family research. Char-Lien had taken her phone and computer to the bedroom to do her work and on-line meetings.

Mid-afternoon my negative test result came through, so at least I wasn't about to be referred to in news reports! I was still significantly unwell, feverish, unable to pay attention to anything Char-Lien told me, forgetting anything I thought I'd been listening to.

We could see the occupants of the apartments across the road at their home desks too. 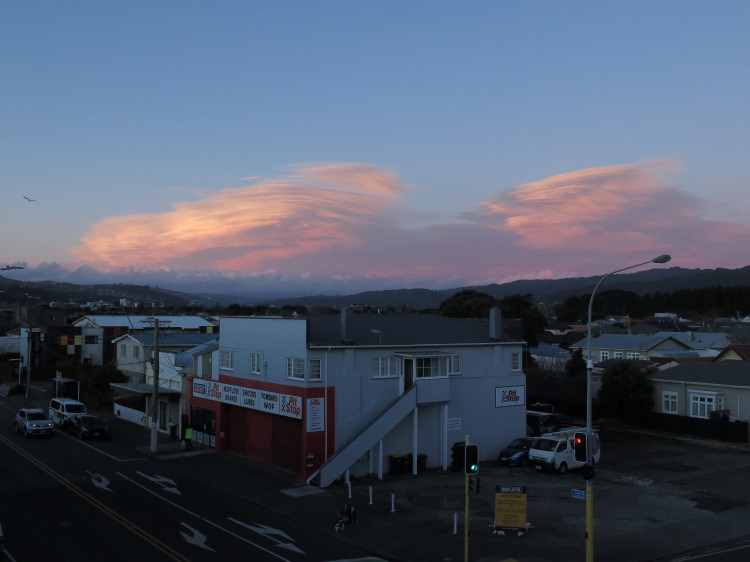 Lock-down is quite different when you're staying with someone who isn't your usual 'bubble' companion. And being right in the middle of town is interesting too, watching buses and cars, people out walking, some paying attention to maintaining distance between themselves and others and some of those others being terribly inconsiderate and not observing the same courtesy.

I wrote to the Covid-19 Response people to ask how I might gain permission to travel the length of the island outside the 48 hours allowed for travel home. As an "essential industry" worker, I was confident it would be permitted but I wanted to make sure, since 950km wouldn't be a quick trip and I'm still too sick to go yet. 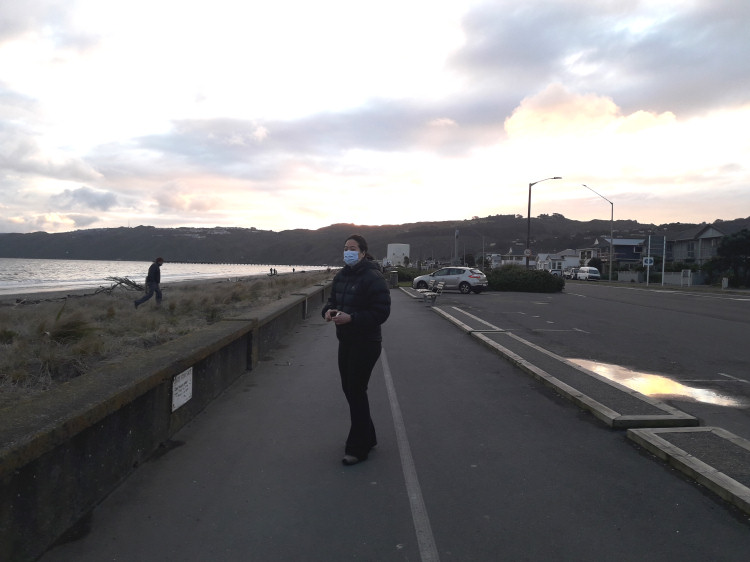 At around four this afternoon we went out for a short walk, down to the sea-front and only a very little way up and down because it was cold.

I was beginning to feel quite a bit better. 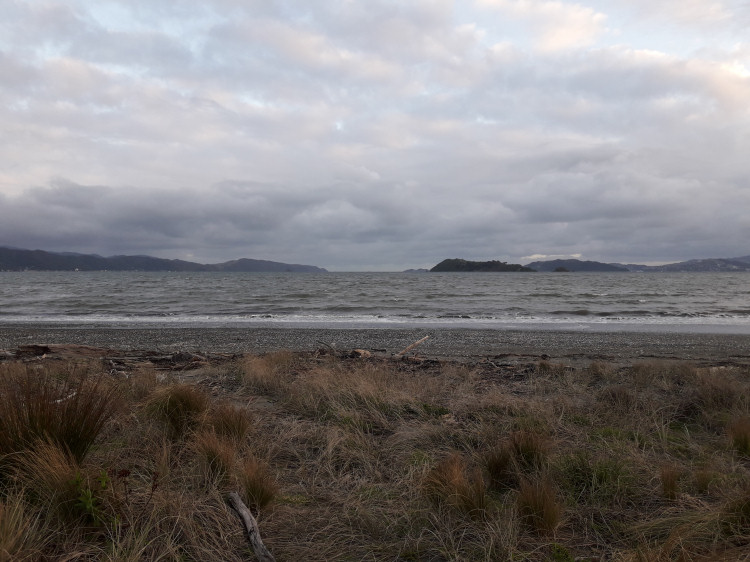 Looking slightly west of south to the heads. The dark land mass just to the right of centre is Matiu-Somes Island, the Wellington Quarantine island of the 1800s.