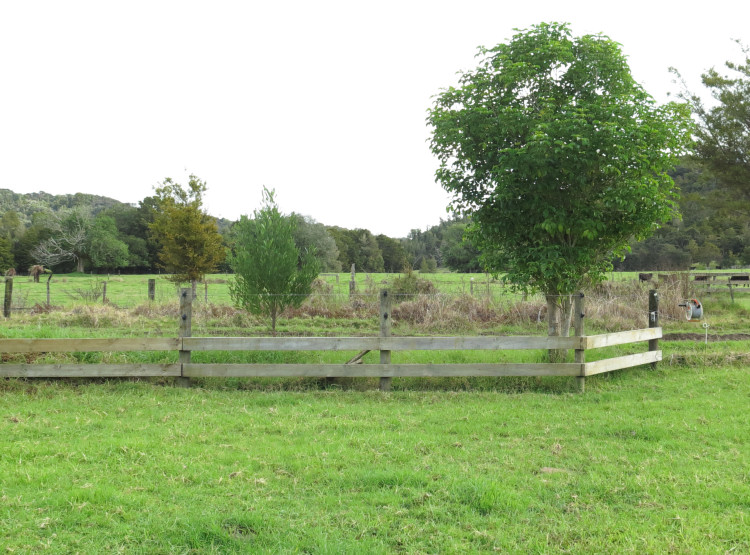 The Akeake, the green tree in the middle here, continues growing well, as does the Puriri on the right. I have to keep revising who's buried here, so as not to forget: Damian, Yvette, Dotty, Demelza, Eva. Must plant more trees.

It's August, so it's time I felt some calves moving inside my cows. The adult cows were all in Flat 4 and I stood quietly with them for a while with my hand on the sides of some of them, watching the bellies of others until I saw some evidence of kicking, felt some part of 773's baby move beneath my hand. I love feeling them move, those hidden, un-met babies.

As I walked back along the lane in the sunshine I looked down the fence-line between Flats 2 & 3 and saw these three Kōtare lined up on the fence-posts. 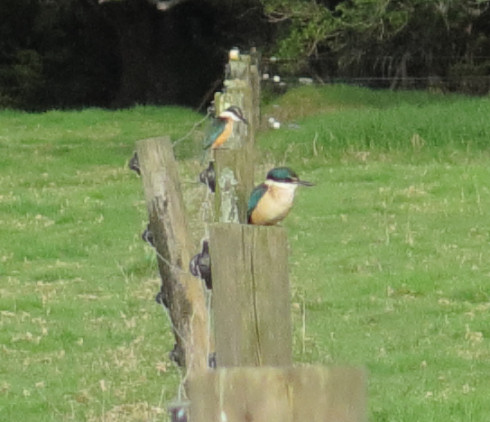 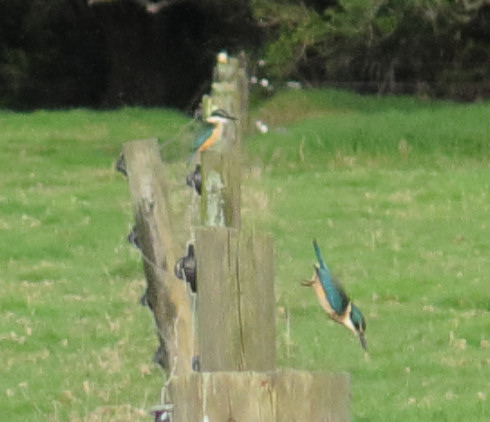 Catching a picture of the nearest bird diving for an insect was superb, even though the picture isn't very good. 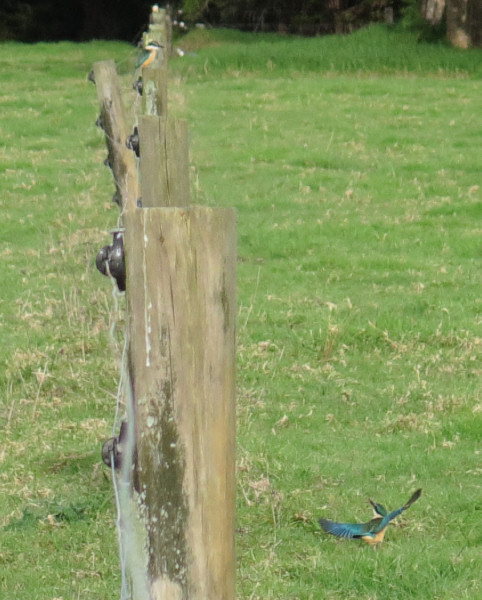 I often watch them doing this in the House paddock, diving to pick up something moving in the grass below them. They're such striking birds. 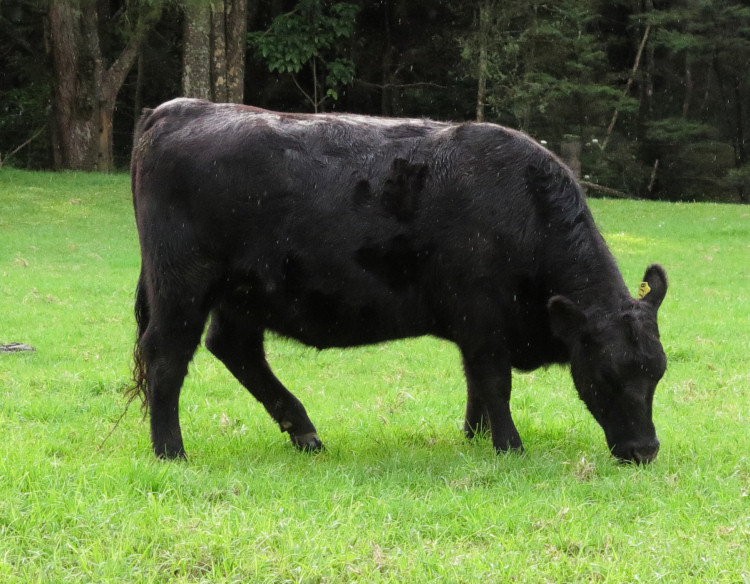 877 is Jet's daughter from two years ago and she's the best-grown pregnant heifer. She's big and in great condition.

I'm expecting her to calve around the 15th of October. 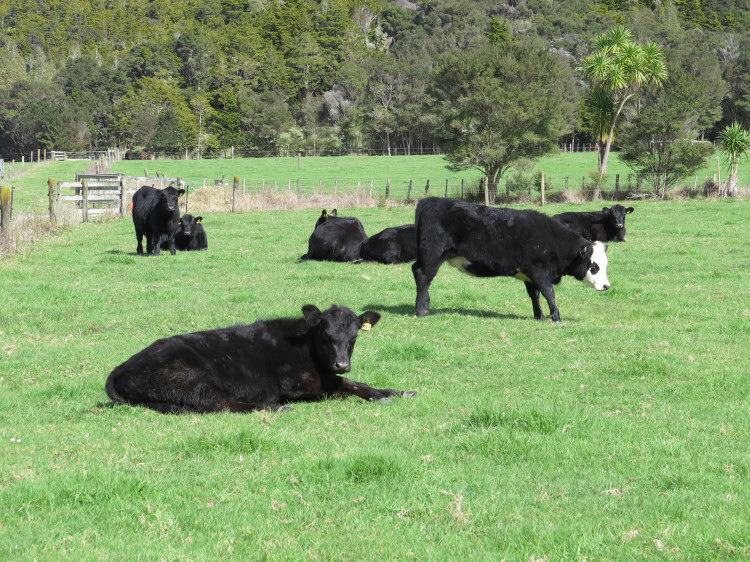 The gorgeous heifers. Because I had to keep so few heifer calves from last season, there were no "maybe"s amongst them.

893 in the foreground is the smallest of the five and I may let her have an extra year's growth before calving for the first time. Her mother, 723, was small when she calved for the first time as a two-year-old and has never achieved a healthy-looking condition since, even though she's now nearly eight years old. Other members of her family like white-faced 716 and 749, are usually in great condition. 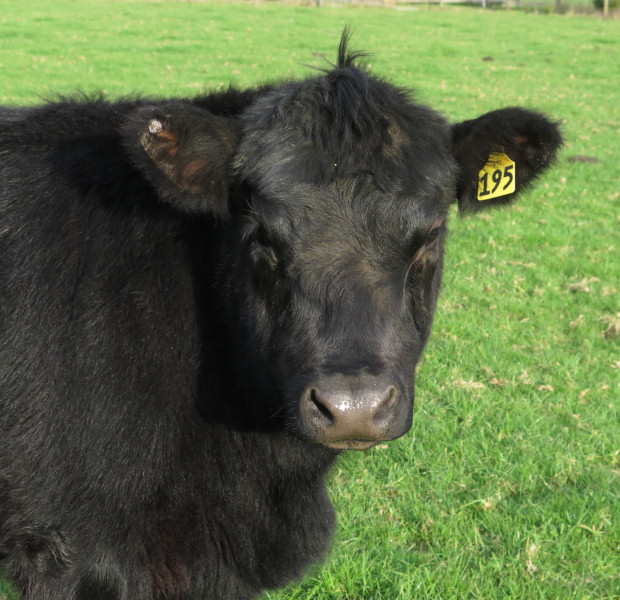 Youngest Imogen is still looking nice. The winter has been very easy for them all with ongoing grass growth. 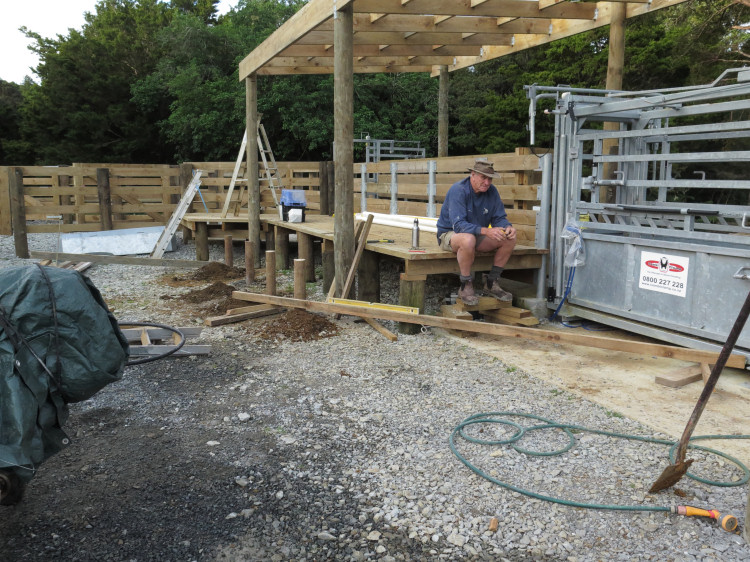 You just can't get good staff these days; the cows do this too, sit around when they're supposed to be working.

Stephan had been setting the piles for the first step down from the cat-walk. We'd had a planning meeting in the morning to decide on the heights of the steps and their width. It's all going very well.

We cancelled our holiday plans. It's disappointing, having arranged our first major trip in several years but I wasn't prepared to take the risk either for ourselves or the people we planned to visit. The air tickets can stay "on hold" in the mean time in case there's another useful opportunity in the next few months.

But the need to get out of here for a mental-health break from our own reality remains, so sometime in the coming weeks we'll go and visit Kate and Geoff in Helena Bay, as we often do at this time of year. 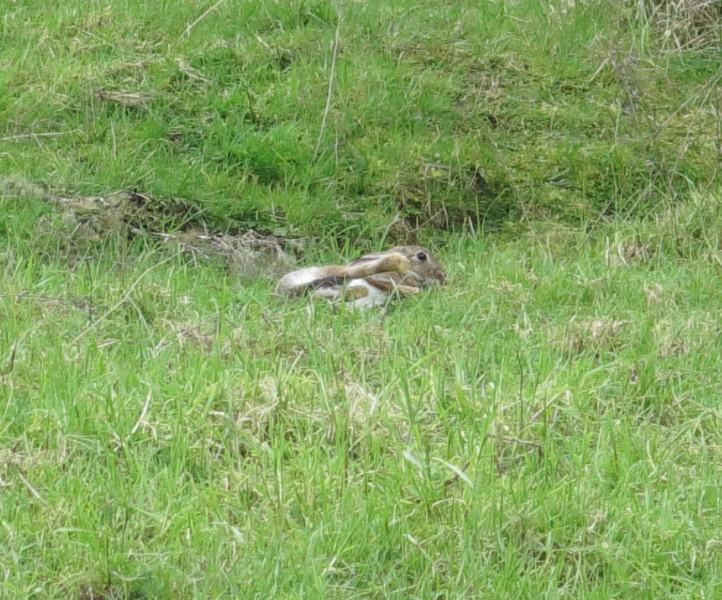 I have no idea what this rabbit was doing. I thought it was dead, stretched out on the ground with its hind legs in the air but as I approached it flipped over and ran off into the long grass. Must have been resting. 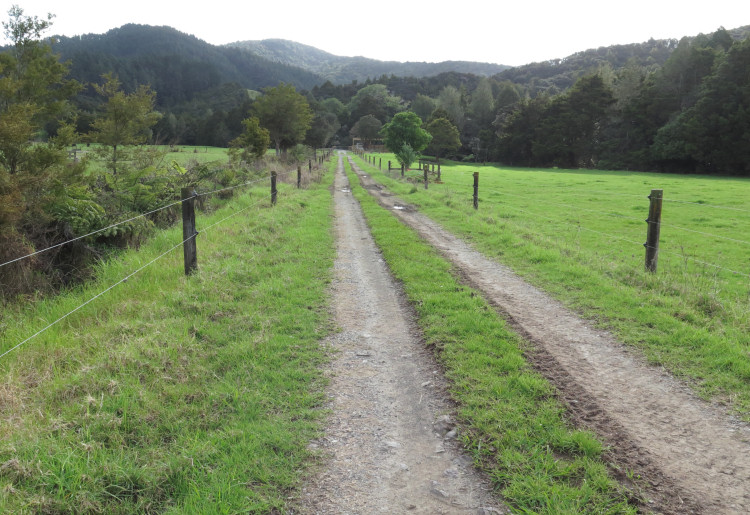 It seems very dry for August. But after entering the weather data into my spreadsheet, I find that actually the winter months, June, July, August, have been wetter than average. 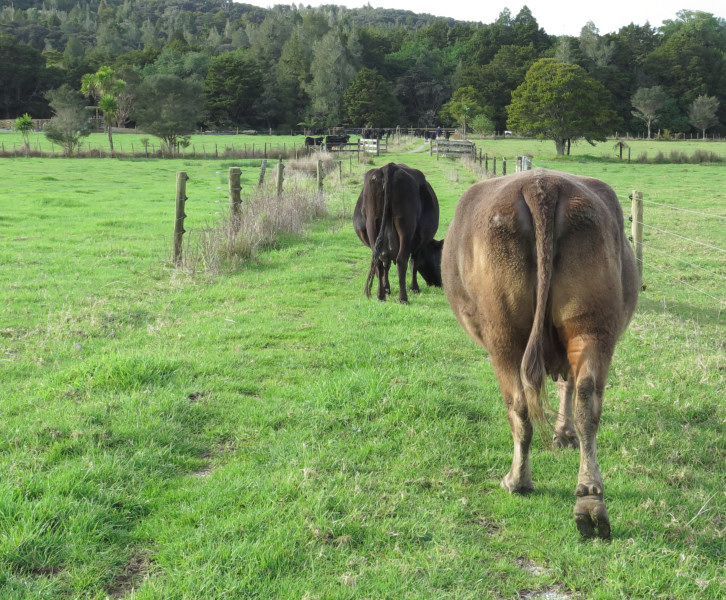 Having gone to town for some more 7in1 vaccine, we got the 13 heifers in from the PW (Stephan is behind them in the distance in the photo) and I fetched Glia and Zella to follow them in to the yards. 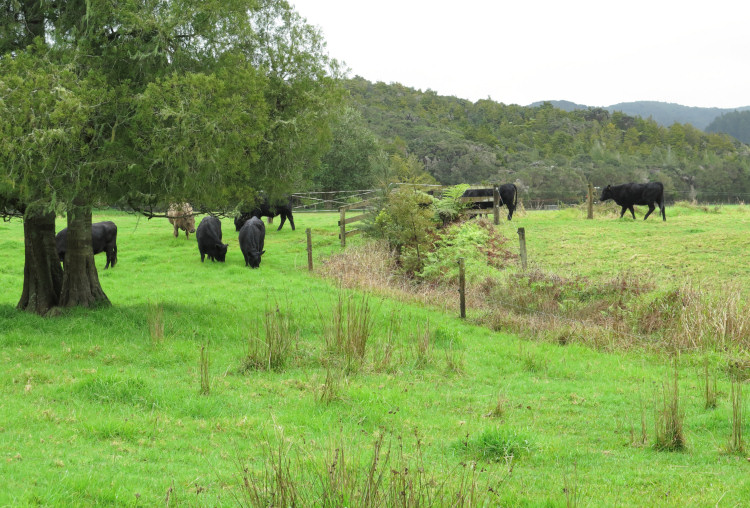 The non-pregnant mob are moving around cleaning things up but they looked like they needed a treat so I put them down in the Flat 1 corner. 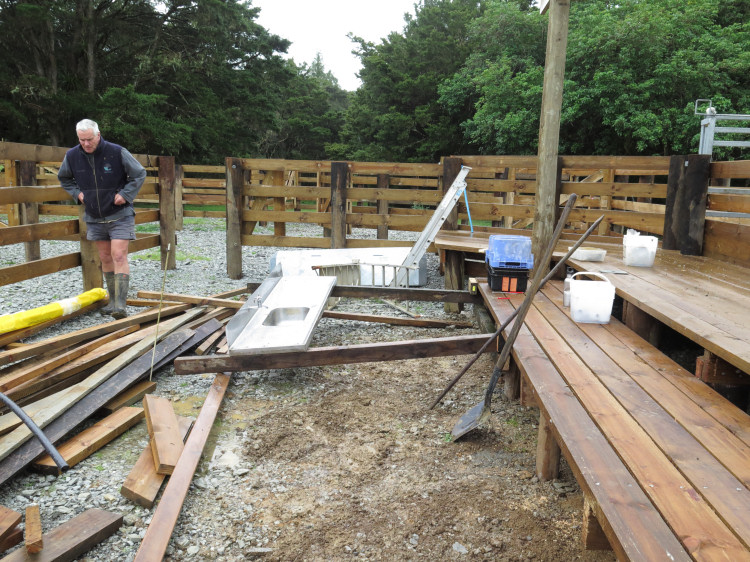 The first step down from the cat-walk is now built so we moved on to planning the little shed. The first thing Stephan did was fetch the sink bench from the shed by the yards out the front, to give me a sense of how my small working and storage area might be laid out. It was longer than he'd anticipated, so we made the shed a bit longer to fit.

Now he'll put some piles in. 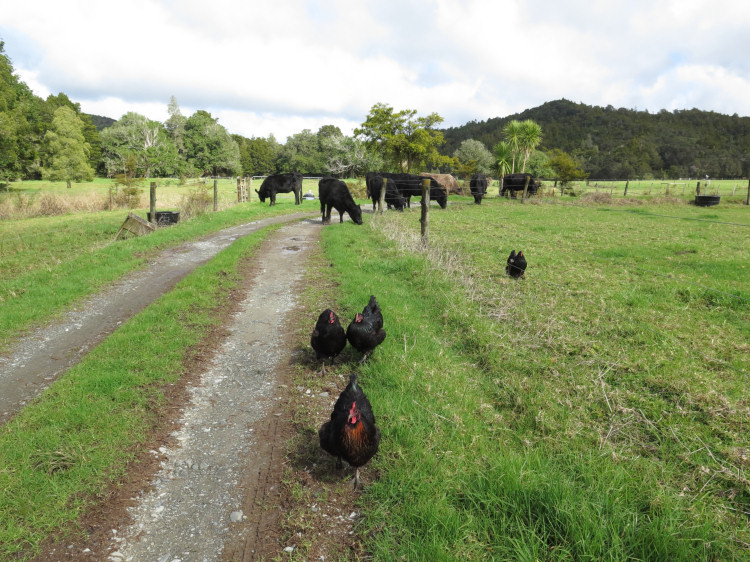 The young hens are lovely birds and it's nice to see them out across the paddock (rather than in the garden). They came out to meet me then followed as I called the non-pregnant mob along the lane. 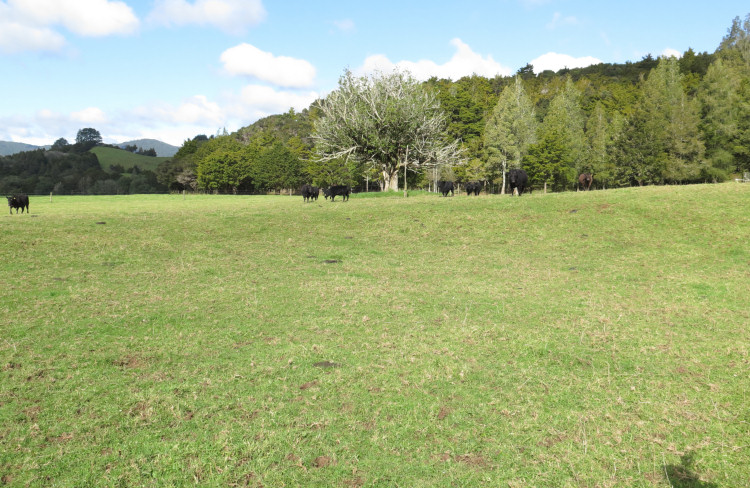 We've had cold temperatures during the last week and the grass has really slowed, and so with less grass ahead of the cattle, I've slowed their movement from one paddock to the next. The bulls and R4 heifers didn't have a lot left when I moved them today. 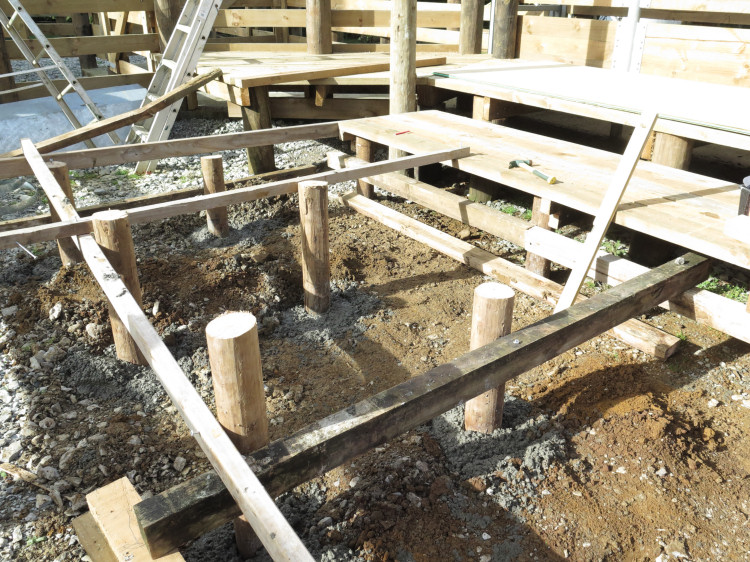 The little shed's piles are now concreted in place. 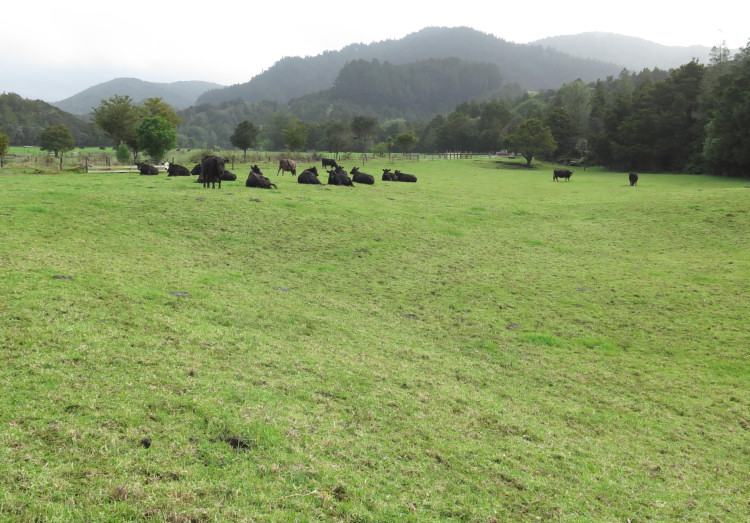 The cows have tidied up the House paddock well enough. I walked out to the Spring paddock to set up the gates, with them following somewhere behind... 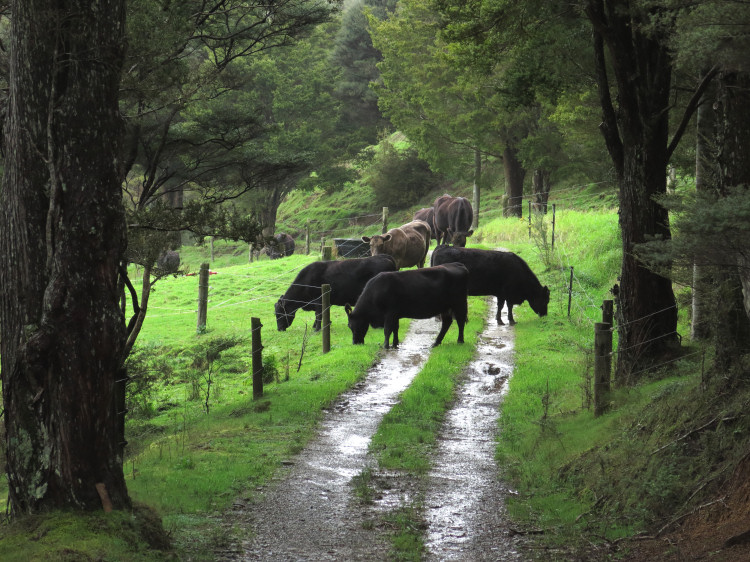 ... then went back to find them and follow them along the lane. 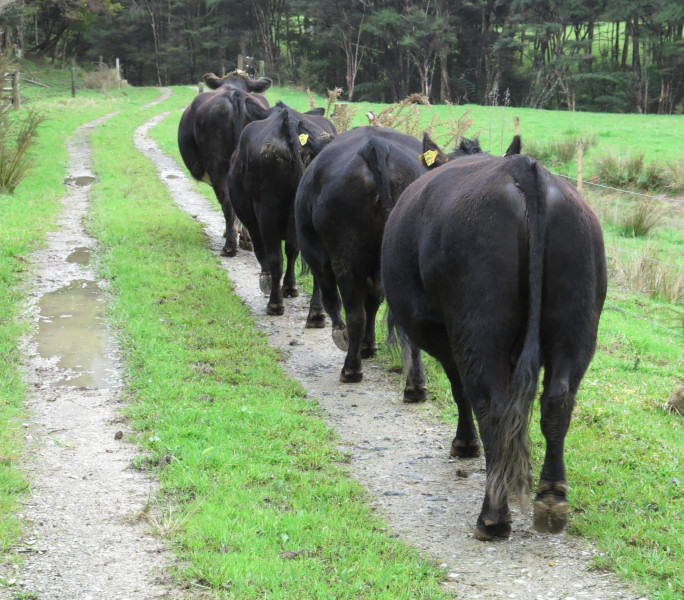 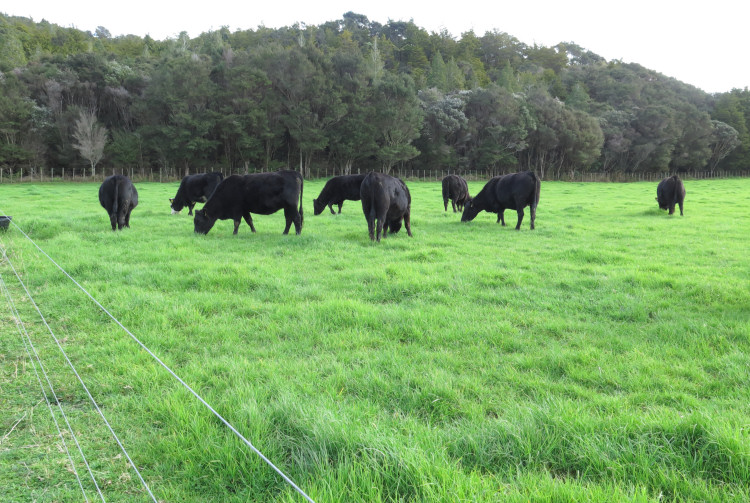 Have we ever had such a paddock in August?

After checking everyone I moved the heifer mob from Flat 5b to 5c. I think they'll be very happy here! 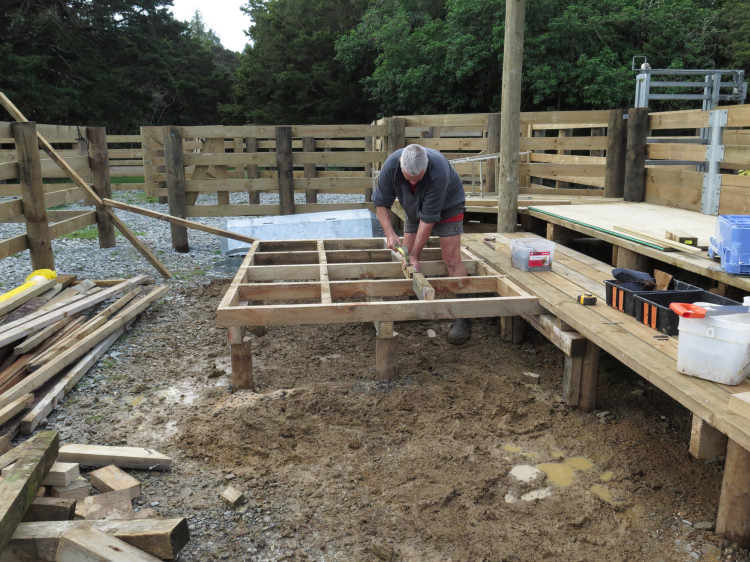 Stephan put the roof on the yards today with help from Gary next door. I took no photos having had to go to town for an appointment and then to bed for a couple of hours' sleep before returning to town in the late afternoon.

I went to a noho marae which was neither noho (staying) nor marae (it was at the wānanga in town) because of Covid concerns and the resulting reduction in our class numbers - there are now fewer than half of the those who started in March.

The breaks in our study and the reduction in face-to-face teaching have taken their toll on us all.