We went out to dinner!  We hadn't seen Roz and Alan for ages and Alan said that as he was about to get a beast killed, he needed us to go and help him eat a lot of steak to make room in his freezer for the new lot.  I wasn't really up to "a lot of steak" but Stephan had a good go.  A couple of other friends joined in and we had a very pleasant evening.

This morning we started freezing milk, in preparation for Zella's dry period leading up to her next calf's birth.

The straining muslin I use for the milk each morning was slimy on addition of soap during washing yesterday so this morning I took four plastic cups down to collect a milk sample from each quarter individually, then did the detergent test on them all to find out what was going on.  (The "home mastitis test" involves the mixing of a 1:3 solution of dish-washing liquid detergent and water, then gently mixing that in equal proportions with each milk sample, to see if it causes the milk to thicken and clump.)  Her back right quarter has a detectable somatic cell presence on that test, so from this morning Stephan milked that separately for the pigs and we'll have the other three quarters.

The somatic cells are white blood cells produced to fight inflammation or infection.  Zella goes through phases when there are detectable somatic cells in her milk, mostly related to stressful periods like the beginning of lactation and weaning.  She rarely has "clinical" mastitis, i.e. Stephan can't feel or see any difference in her udder or the milk when he's milking and there's no difference in the milk's appearance, taste or smell as we're consuming it, although the cream is slightly different then and doesn't keep as long.  That's not a very pleasant thought, but we are drinking the milk of a living animal and thinking that we have ever had "pure milk" out of cows is unrealistic.  It's all food. 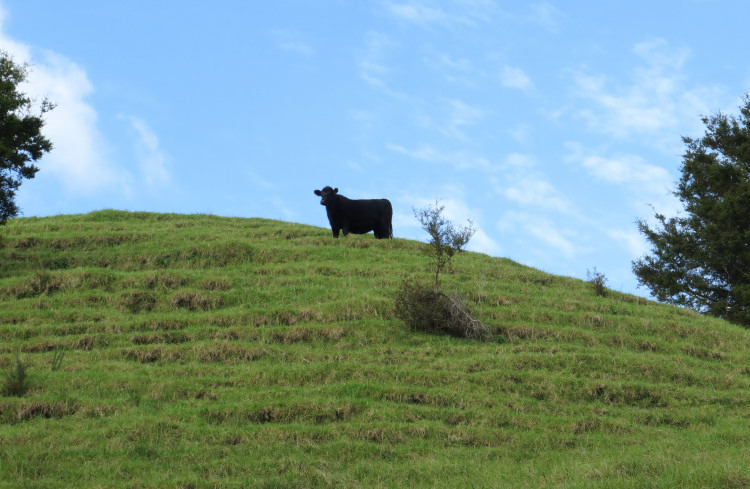 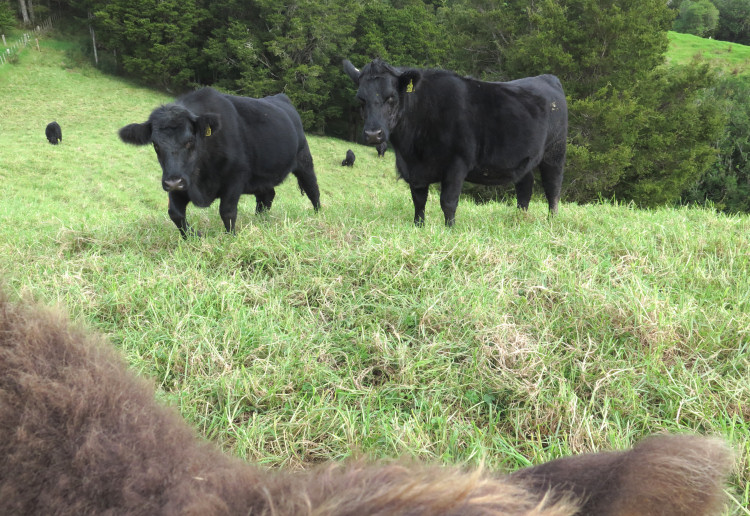 Here she is again, on the left, coming to investigate what we were doing with grey 807, who was standing enjoying a scratch around her head. 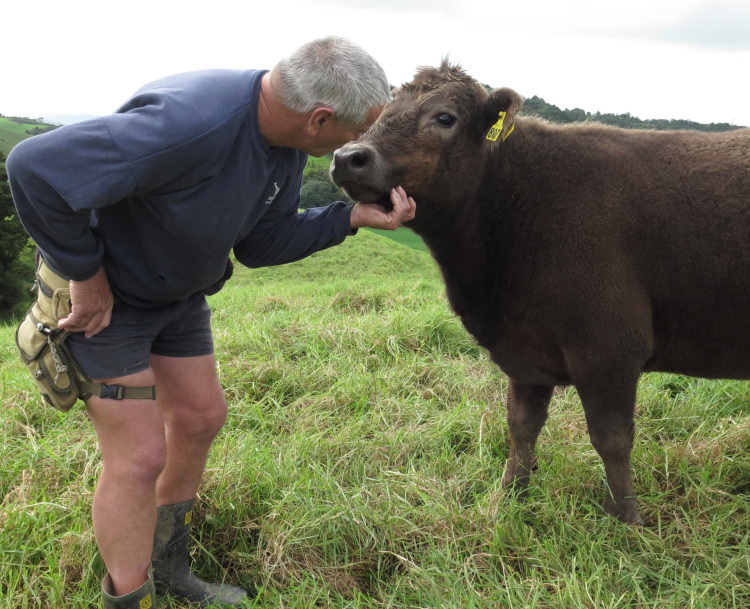 Such wild cattle are tricky to deal with.

I sent this picture to the manufacturer of the cattle crush we're buying, to demonstrate the nature of the cattle we need to contain in the equipment.

I remain surprised by 807's temperament.  Some of her maternal relatives have been nervous creatures and her sire, bull 137, was tricky - and so were many of his relatives.  Both of the black heifers above (813 is the other) are his daughters and skittish creatures.  807 is delightful. 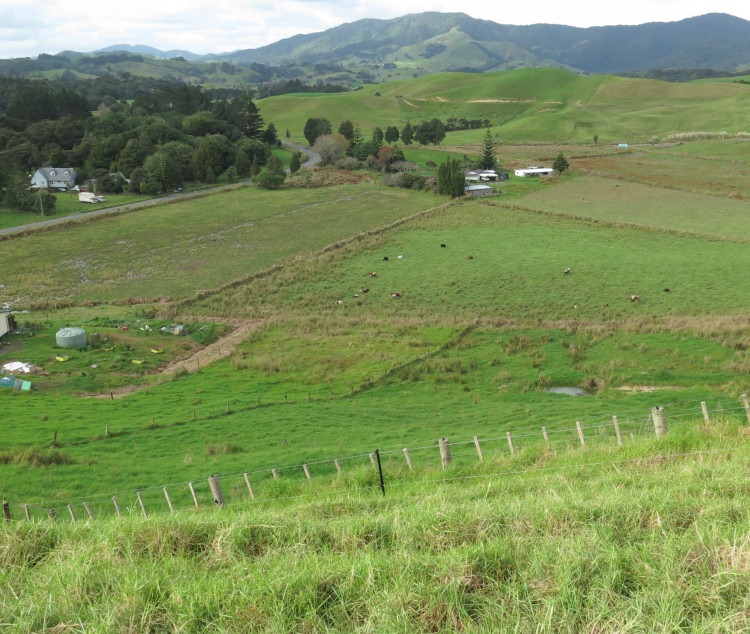 Looking down the other side of the hill, is some very wet land!  I wonder if it is poor drainage, poor fertility, a difference in soil type or management that causes the water to remain sitting on the surface?  One of the paddocks out to the right is also obviously wet, evidenced by the orange tinge of the wet-area weed growing there. 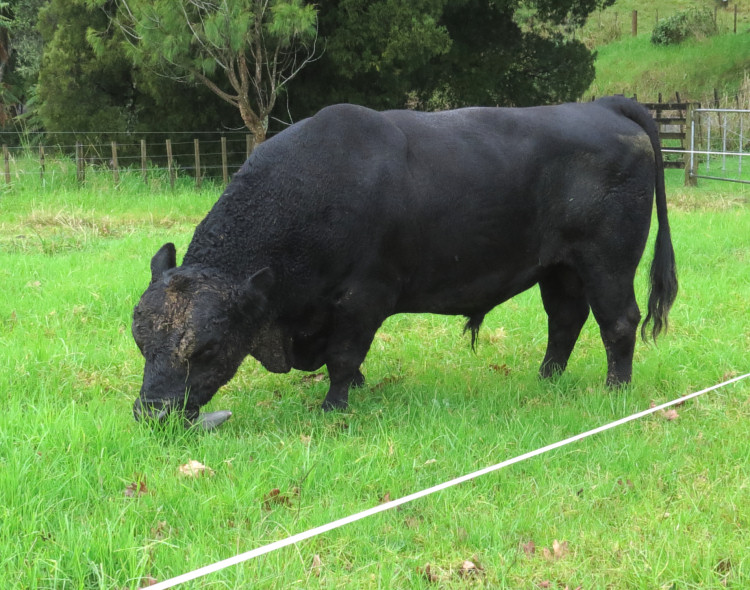 I walked him in this morning and set up the electric tape to keep him in the round-about, out of the way of the driveway but ready to be inspected by the vet later this afternoon.

As I looked at this picture before writing about it, I wondered what on earth was beside his muzzle: it's his long tongue, flicking out to gather in the grass for his next mouthful.

The vet came, watched him carefully as he walked around, pronounced him fit to travel on the truck to the works this week and left me with the Fitness of Livestock For Transport Certificate that will go with him on the truck.

He barely needs a certificate now, his lameness being almost undetectable but as I had previously consulted the vet about his leg injury, I felt it wise to follow the process through and ensure he was indeed fit to travel without risk of the journey causing a flare-up of the injury.  The point of the inspection and certificate is to ensure the welfare of the animal is protected.

I'm going to miss my big bull.  Born in 2009 to Delilah 36, he was one of the three bulls I kept from that year, siring many lovely daughters over the years (and many sons, but they nearly all get sold, so I don't have long-term relationships with them).  His temperament has always been calm, so I kept him for much longer than the other two, as a reliable back-up bull.  Last year he suffered horribly from having long-wet feet during our very wet winter and then in the summer, he injured his stifle (like our knee, the big joint above where the legs join the body of a bovine) during mating and since then has had to be kept quietly in flat paddocks.  I dare not keep him any longer.  A nine-year-old bull is old in the farming world. 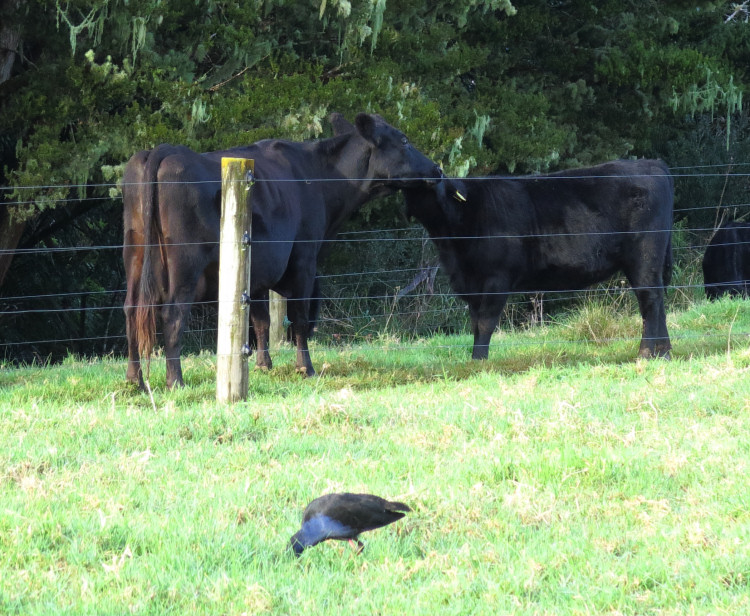 We think Zoom has partially weaned herself already.  In the morning after milking, she and Zella greet each other with a mutual grooming session but Zoom doesn't even bother to try and feed.  I suspect she does so later in the day but we very rarely see such activity.  It's not as though she needs the milk now. 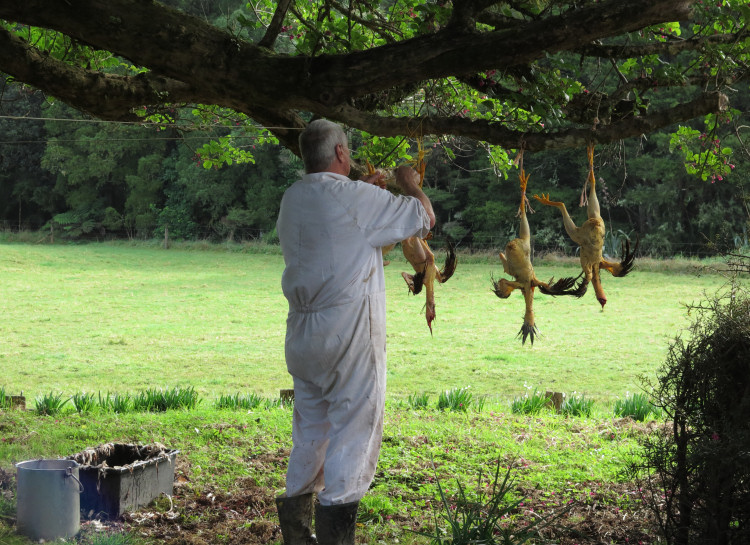 Four prospective chicken dinners.  They were beautiful roosters but being male birds, this was always their destiny.

Stephan quickly chopped their heads off and then used a big bucket of hot water to help strip the feathers from their skin.  He brought them inside to clean them before quartering some for casseroles and left a couple whole for roasts.  After they'd been chilled for a while in the fridge, he vacuum sealed them and put them in the freezer. 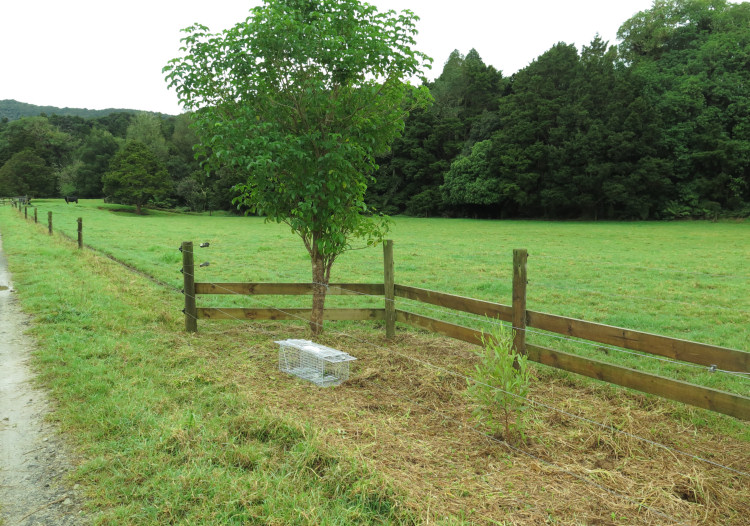 While I was away, Stephan planted this Akeake sapling (the little tree on the right) in the sheep cemetery reserve.  This is the plant I rescued during Stephan's work to prepare the new track and fencing between the PW and Middle Back paddocks two years ago.

The cull cattle went today, on one of the worst sort of weather days for travelling: there were heavy rain warnings and eventually lots of flooding further south.  Fortunately there was little rain here and the cattle got to Moerewa without incident, despite lots of serious road flooding north of Whangarei.

We brought the cows in and spray painted marks on their backs and tagged 606, who's never had a NAIT tag, tried to tag Queenly 107, who had lost hers: she ended up with a scratched ear and was so determined not to let Stephan tag her that we decided she would have to go as "impractical to tag" and we'd pay the penalty.

Mr Big 87 was on the other side of the race and I brought the two younger bulls in and put them with the cows.  I didn't want to have the bulls too near each other, fearing a big fight, but the youngsters were quite quiet once they were with the cows.

I ended up being present for loading, since I wanted to ensure Mr Big went on first and quietly and there were particular cows I wanted to accompany him, for his safety - nobody likely to come on heat, for instance, tempting him to try and mount them!

The first two pens went up quietly but there was a bit of bother with the third lot and bull 151.  By the time there's been a lot of banging and clanging with the first lots on the truck, the last ones are getting a bit fractious and less willing to go up the ramp.  But it was all done relatively well and off they went in the rain.

Sarah, who had come out earlier in the day, was having a lovely snooze with Wanairangi, in Stephan's rocking chair, when we returned quietly to the house.  I always appreciate some pleasant distraction on works day.

Later in the afternoon I moved the rest of the cattle, including the 16 Over the Road, from the smaller corner to the larger hillside area. 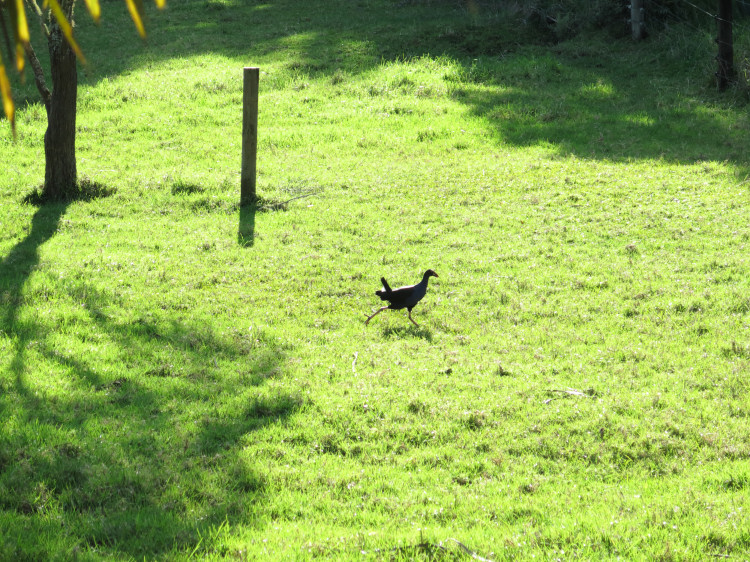 This Pukeko ran past my office window early this afternoon, carrying a long tendril of something green, suspiciously like Tradescantia from the stream bank on the other side of the track, around the outside of the garden and down to the area by the pond.

I got up to see what it was doing, watching it stop whenever it dropped its prize, picking it up again before continuing on. 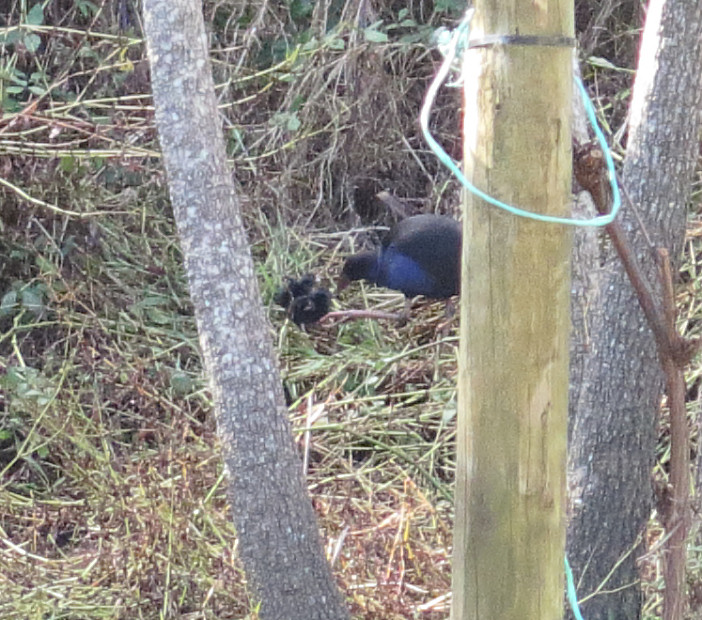 Its destination was a nest of newly-hatched chicks, where it began picking bits from the tendril to feed to the babies.

I have no idea what they're doing with chicks at this time of year.  NZ Birds Online says they will breed in any month up here but I don't remember seeing them nesting so early in winter.

Of greater concern is that they might be planting Tradescantia all over the place! 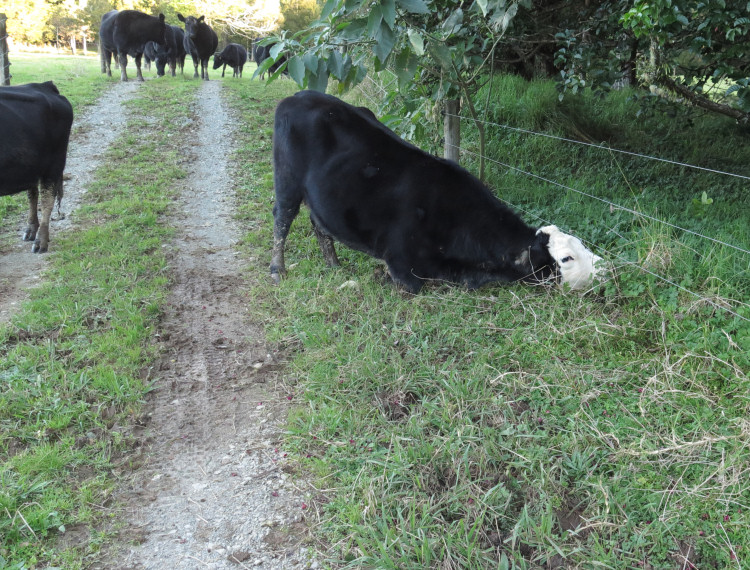 Any time, anywhere, the grass under the fence must be greener.  She's usually right but this is now 746's regular grazing mode.

Abigail used to be the under-the-fence pruner but she did it by lowering her head between straight legs and reaching as far as she could.

Stephan arrived home from town in the ute, towing a trailer upon which was a small digger!