The week beginning the 9th of June 2018.
Saturday the 9th 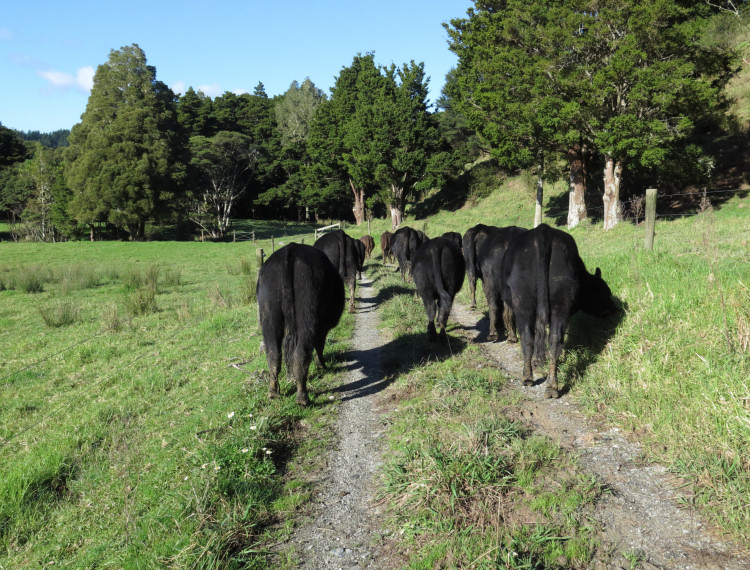 On a fine morning, at last feeling disposed to organising anything beyond absolute essentials, I started bringing cattle in to the yards to give them an overdue copper injection.

These are the cows, calves and yearlings and after they were done, we put them Over the Road, where there's quite a bit of grass to be eaten.

After lunch it was the turn of the 24 cows from the Spring paddock.  As I checked they were all there, I ticked (untagged) 710 off my list and then tried to do so again: Emergency 111 has lost her tag in the last two days and the two cows look quite similar.

When the cows had passed the House paddock top gate where the cull mob is grazing, I noticed Meg 699 conveniently there and so drafted her out into the lane to rejoin the cows: I have decided she will stay.  Since putting her with the cull cows the other week I've been reviewing all the times I'd written about her and Gem, thinking about my enjoyment of the two of them together and, on balance, decided I get more pleasure from her slightly troublesome presence than annoyance.

Immediately I was entertained while watching everyone in the cow mob ignore her as she made her way to join them: none of them realised she hadn't been there all the time, since she smells and looks exactly like Gem. 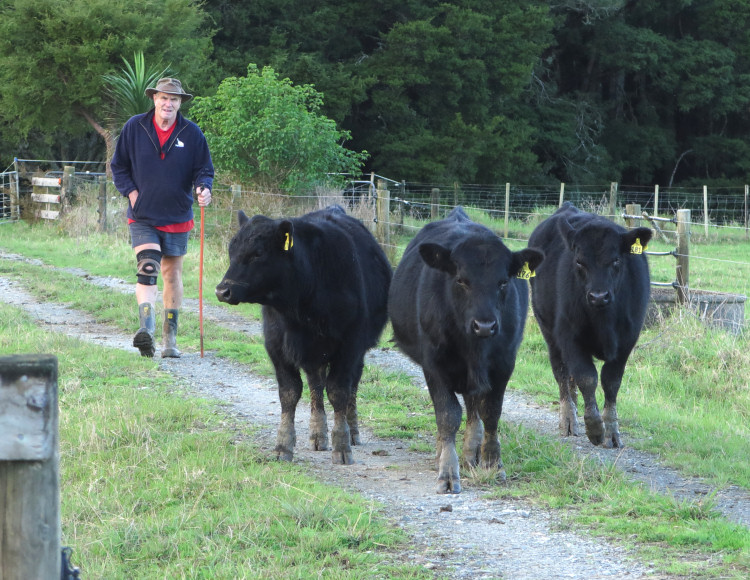 The little bull calves coming back to their paddock after their copper injection.

This morning it occurred to me that the Fieldays are on this week.  I will be in Auckland for a meeting on Tuesday, flying on a super-flexi ticket which can be changed in any way and maybe I should think about popping down to Hamilton to have a look at the cattle-handling equipment we've decided we'll probably buy.

I posted a query on the Lifestyle Block discussion forum, asking if anyone was planning to go and a woman I've exchanged friendly emails with for the last few years, but never managed to meet, replied that she and her family would be going on Wednesday.  I cheekily emailed and asked if I might catch a ride with them and she invited me to stay on Tuesday night, if I could get myself down to Pukekohe on the train.  Easy!

That having been settled, I changed my ticket from Tuesday to Monday morning since the weather forecasts were looking pretty hairy for Tuesday morning's flight and I didn't want to have to worry about not being able to get to the meeting.  I left deciding about the return journey until later.

Chantelle and Mike, along with eldest son, Eric, came out to see us while they are up north on holiday from South Auckland, where they now live and work with the Salvation Army.  We had a lovely afternoon and then they stayed on for dinner, while I bustled about getting things together, ready to leave early in the morning.

I flew to Auckland, caught bus and train to Newmarket where I bought a small folding umbrella for Wednesday's (forecast rainy) trip to the Fieldays while I waited for Jude, who'd offered to pick me up from there.  We went out for coffee with one of Jude's lovely friends and later I went to visit Jill for a while.

Jill continues her steady (Alzheimer's Disease) decline into oblivion.  Her "best friend Rose" appears to have had a stroke and no longer accompanies Jill everywhere - anywhere.  Jill seems not to have noticed the change.  Having become extremely fat for a while, Jill is now losing weight quite quickly, reputedly because she loses concentration during dinner and spends most of each day walking between her room and the dining room between meal times.  I wonder what it is like to be Jill?  I think she gets very frightened in her confusion.  It will only get worse, more distressing for everyone.

One of our Complaints Assessment Committee members couldn't fly from his home airport this morning due to strong winds and I was very glad I'd had the foresight to come down yesterday.  The other arrived without incident and picked me up from Jude's.

After the meeting I went out to the airport with my colleague, since that got me part-way on my journey south.  I caught the bus back to Papatoetoe, a train from there to Papakura and then the horrendously noisy diesel link train down to Pukekohe.  I waited for a while for Sally, who picked me up and took me home to her place for the night, where I met her very nice husband and lovely daughter.  They fed me a delicious roast lamb dinner and very kindly kept their dogs out of the way for the night.  I don't meet many people with such considerate dog-manners!

I breakfasted quietly while the family went out and did the necessary animal chores in the cold morning air and we set off for the Fieldays at eight o'clock, arriving at Mystery Creek sometime around 11am.

I had a map and only two vendors I particularly wanted to see and promptly went off to find them.  The first was UBCO bikes, to have a hands-on inspection of their electric farm bike, since my AG100 is progressively wearing out and an electric bike would be fabulous: silence and no fumes!

The other site was that of Combiclamp, who produce cattle and sheep handling equipment.  Stephan looked at their auto-closing head-bail when he went down to the Fieldays five years ago and it's time we made a firm decision on that gear.  I particularly wanted to go and see and hear (too much metallic clanging would be unwelcome) how the bail worked and since Stephan's trip, we've been thinking we might actually extend our purchase to a whole cattle crush, for ease and safety.  I spent some time inspecting their cattle crush with a vet gate area at the back, thinking that was what we needed but, back at home, had second thoughts about how that was set up and have opted in the end for their standard crush set-up.  Combiclamp owner, Wayne, and I have had several entertaining telephone conversations since my trip, sorting out some design details - the crush can be set for either-side operation and there are a couple of optional extras we had to discuss.

The crush will be manufactured in the next month or two and should arrive mid-September.  We have some work to do in yard design and preparation!

I met my hosts again at 2.30pm and they dropped me back up at the Pukekohe train station just before 4pm, in time to catch a train north.  I had, early in the morning, decided the most stress-free option was to put my flexible air ticket on hold, in case I didn't make it back to the airport in time.  I could then reactivate it but if I'd been too late, I would have forfeited the fare.  In the event I arrived in very good time, caught my flight, came home.  It was a good trip. 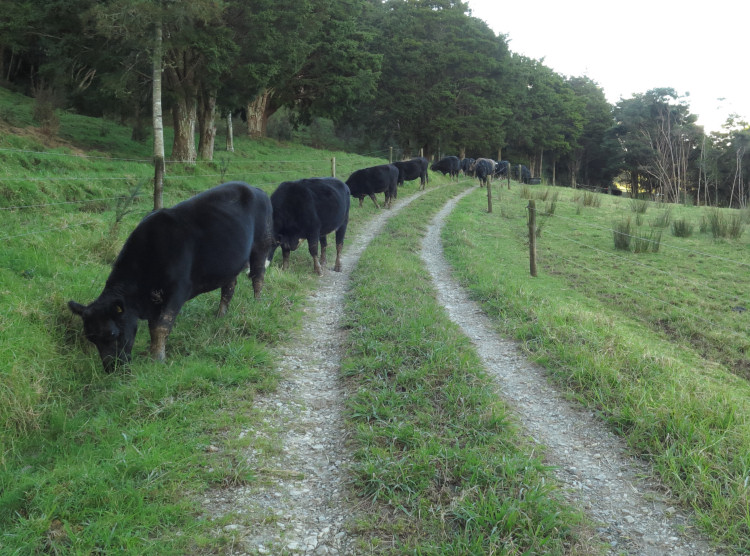 I spent a lot of this fine day doing Vet Council reading.  Some days it feels like a full-time job!

In the later afternoon I went out to check animals, moved the 25 cows from the Back Barn to the Pines paddock.  They always have a lovely graze along the sides of the lanes as they come.

We went to help Elizabeth and Miriam re-site William's long lengths of chicken electric netting.  It's a complicated job, having to work around rows of grape vines, citrus trees and so on.  But we did a good job together, I think.  The chickens looked happy.

Back in town I had to go to the Post Office for a passport-style photo and then to the Police Station with my Firearms Licence Renewal application.  It had got lost in the upset of the last few weeks and I thought I might have left it a bit late; but the woman to whom I submitted it said I was earlier than most.