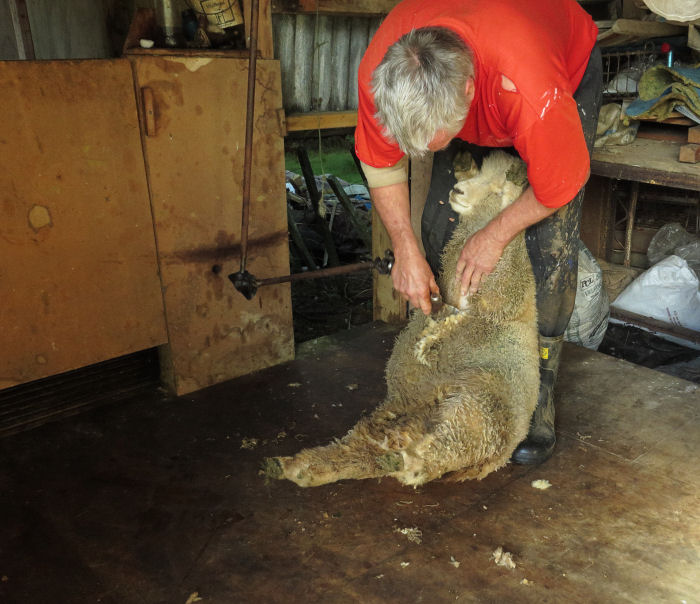 The sheep have been in need of shearing for a few weeks and today Stephan said his knee felt alright-enough to give them a go.  He started with the lambs. 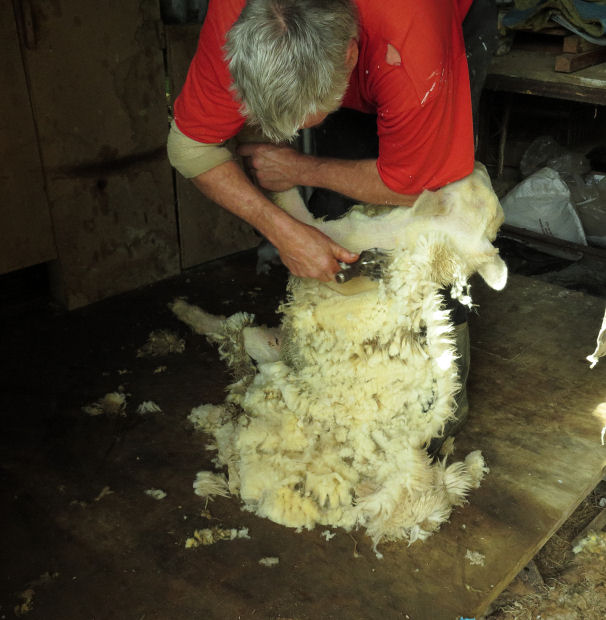 The little ewe was much nicer shearing than her brother above, whose wool was sticky all over his body.  He must have been a bit stressed by something, perhaps in need of a worm drench?

The lambs were easy but then he moved up in size, finishing with Yvette's enormous daughter.  His knee coped ok with it all but it's hard on an old shearer's back!  I think we won't keep keeping sheep for much longer. 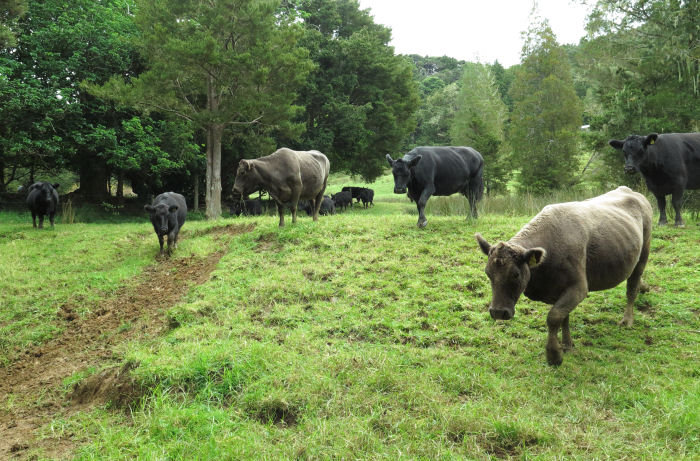 The cows, coming out of the Tank paddock.

Now that Curly has gone, there are only two grey cows in this mob, 607 and Endberly.  Thinking about the make-up of the herd prompted me to update the Cow Families document for the season. 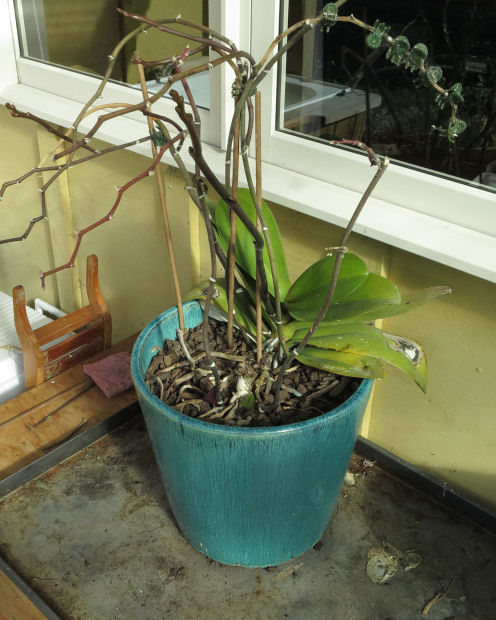 It's getting too cold for the Moth orchid outside now but it's far too heavy to move easily in this big pot - it turned out that most of the weight was the pot itself.

I gently rolled and tipped until the plants and all the media fell out, then repotted the two plants in separate, smaller, plastic pots that can be moved around easily.  They're now on a wide windowsill inside the house for the winter. 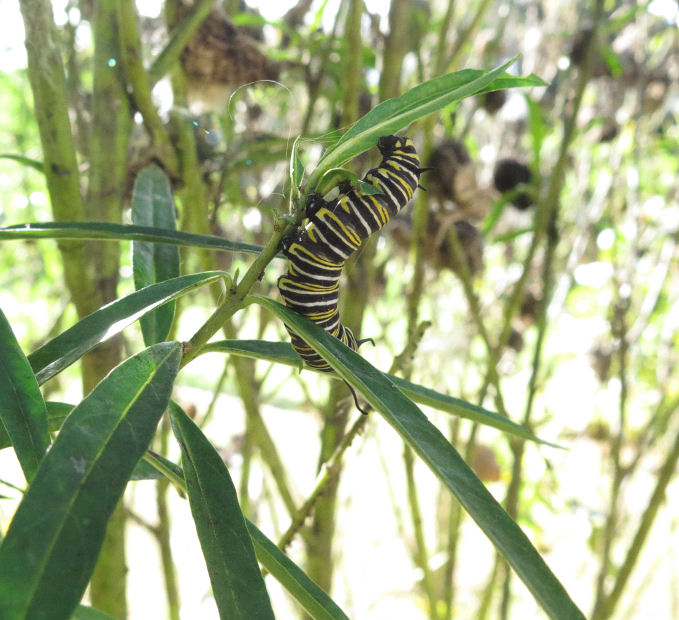 Surprisingly there are still a few Monarch caterpillars on the Swan plants, some of significant size.  But having watched two recently fail to pupate, I moved this and another couple to potted Swan plants on the deck, where the orchid had been, where they became a bit more active than they'd been out in the open. 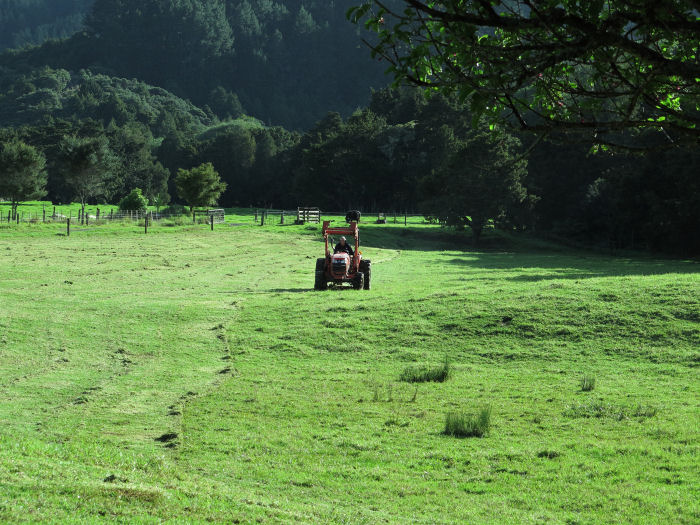 Ground conditions are unusually dry for mid-June.  Stephan thinks mowing might be risky because the grass won't regrow but I think it's better to do it so the grasses which do grow in the winter won't be shaded by the uneaten rough Kikuyu remnants, that being why we usually mow in autumn.  The only reason we don't usually do it this late in the season is that it's generally far too wet by now. 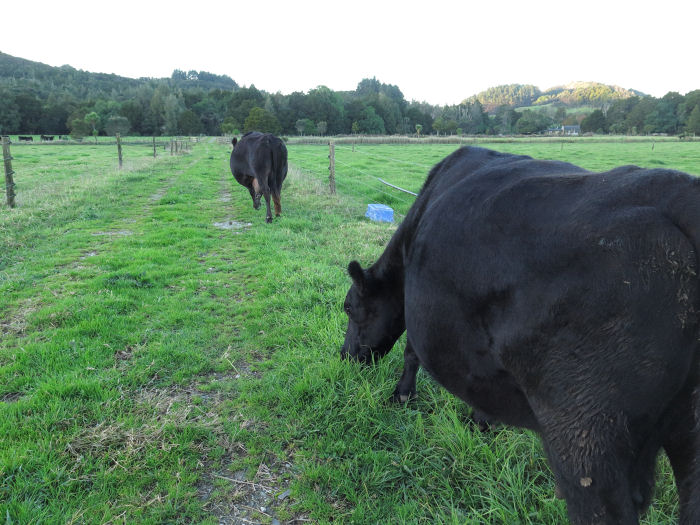 The cull cows ate quite a bit of the flats' grass, so Zella and Demelza are having to go a bit further out for a good feed during each day - and then need walking in by one of us, since they won't come on their own.  Today they were in Flat 4.

This was the last evening we milked Zella, since it's getting close to the time we should dry her off.  We're still having problems with mastitis and I don't think it'll make things much worse if we cut down to once-a-day. 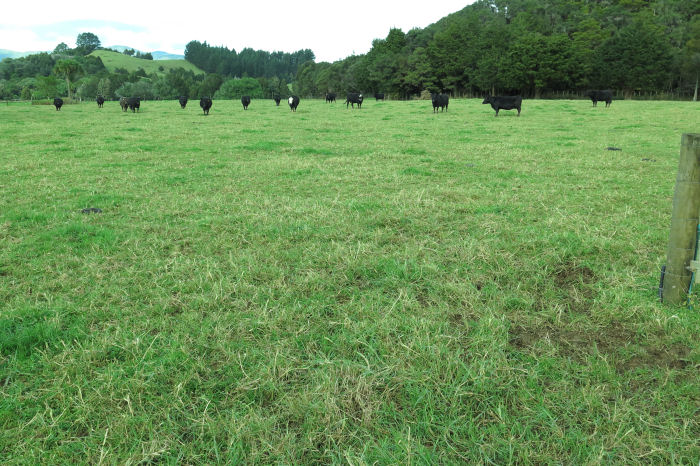 Calling the cows out of Mushroom 1 and into Mushroom 2.

This is a "before" photo, because Stephan was on his way out to mow it ... 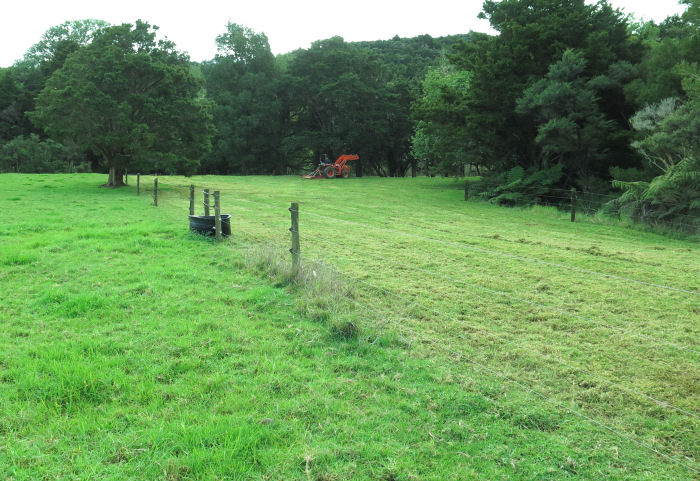 ... after he'd mowed the little Camp paddock, where they cows had come from previously (the Tank paddock is across the stream beyond the tractor). 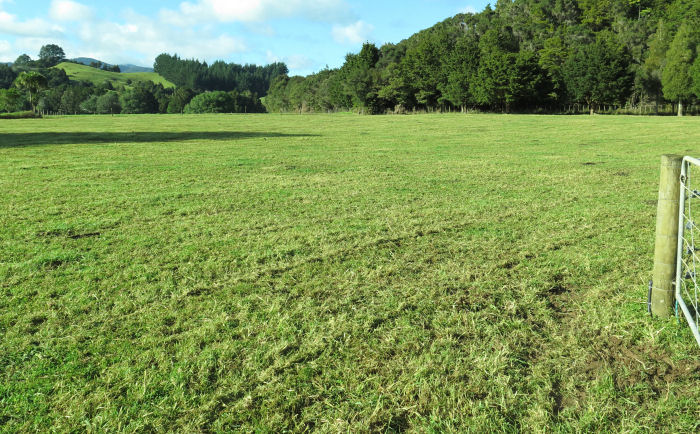 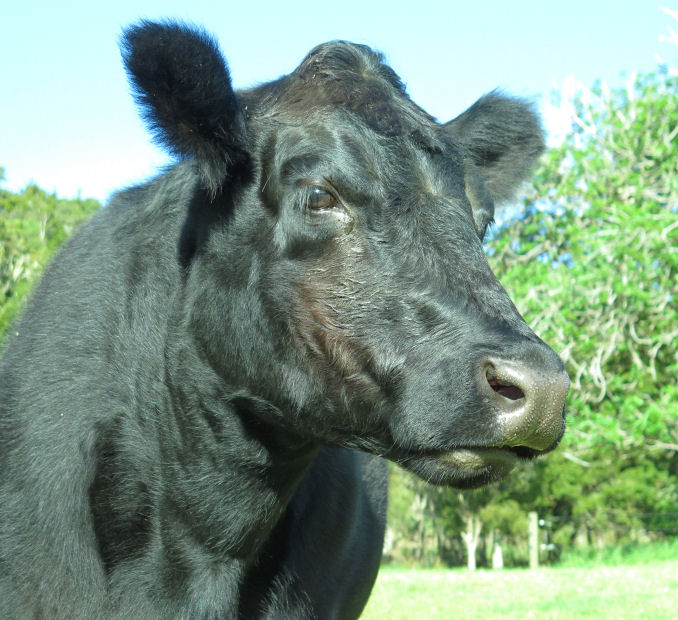 710, now with no ear tags, her number having fallen out somewhere yesterday. 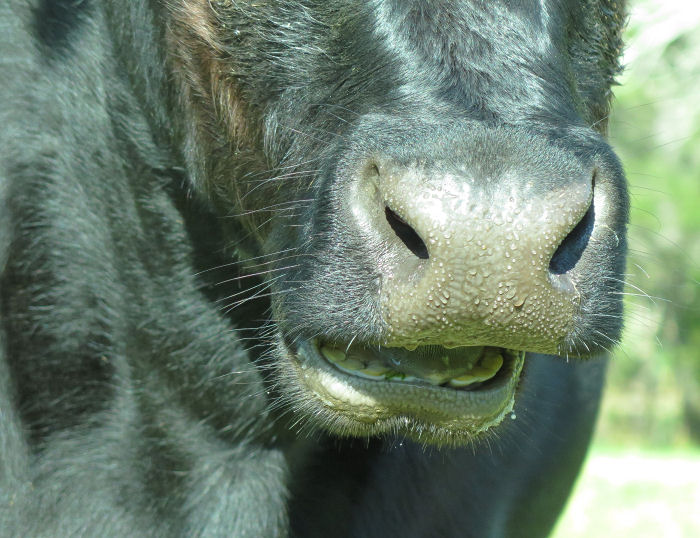 710's teeth.  I like to check cows' teeth at this time of year, to ensure everyone has a full set at the front.  Gaps or missing teeth cause problems, particularly when the grass gets a bit short, making it hard for a cow to eat as much as she needs.

I position myself in front of a cow with the camera set to repeatedly operate for as long as I hold the shutter button down, capturing multiple shots of chewing, some of which will show all of the front teeth - I discovered it's very hard to get the timing right with single shots.  It's easier to see the teeth clearly in a still photograph than in the midst of continual movement of the cow's jaw. 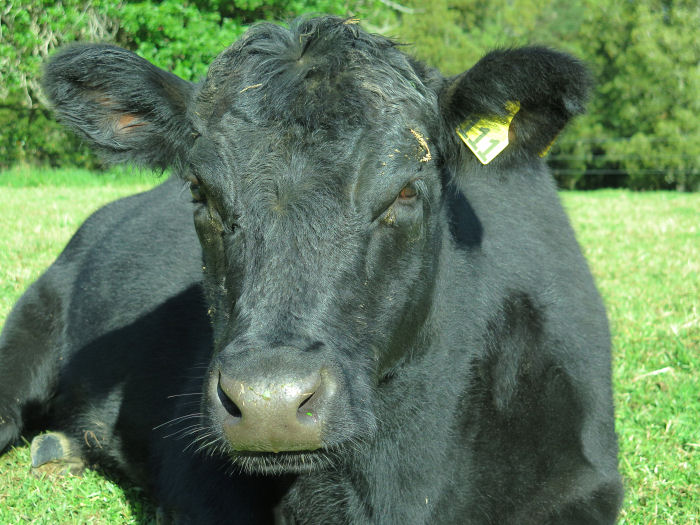 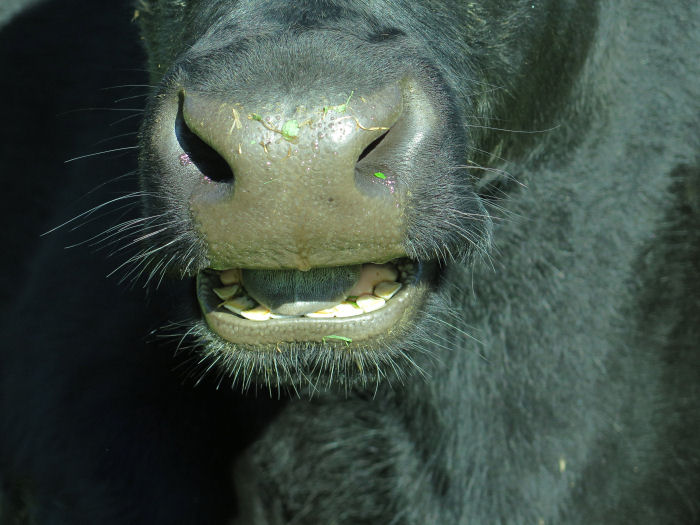 The last photo I have of Emergency's teeth was when she was R2 and her first two incisors had just erupted.  Now six and a half, she has the full set of eight incisors.  She will have all her permanent molars as well but they're rarely seen, except if you look while a cow is yawning or can bear the noise for long enough to stand in front of her and look while she's calling. 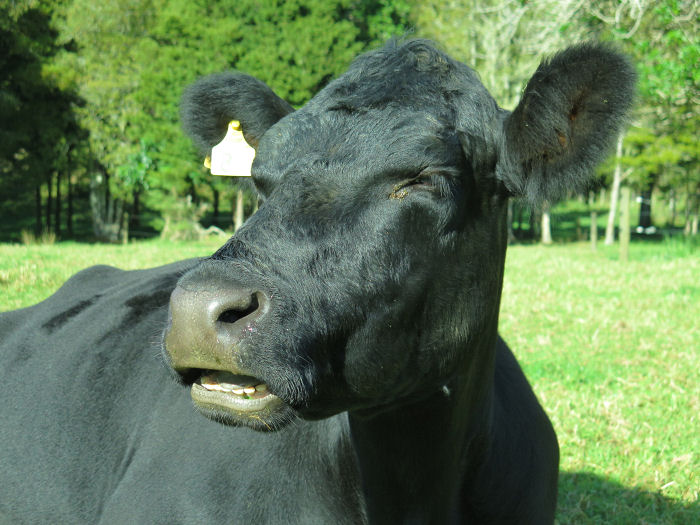 This is Eva, proving she still has a numbered tag in her right ear which, within two days, she had lost!

Soon there'll be more untagged cows than those with numbers.  Lucky I know who they all are.

I spent some of today ordering and examining historical title documents for the farm, trying to trace back to Janice's grandfather and beyond.  At $15 for each step, it wasn't a cheap exercise but I'd decided that would be part of the "Celebrating 40 years in Diggers Valley" budget.

This evening I drove up to the airport to collect Bernie, who came last year at Easter.  We're delighted he wanted to return, even though we'd be home this time.  He'll be here for a week. 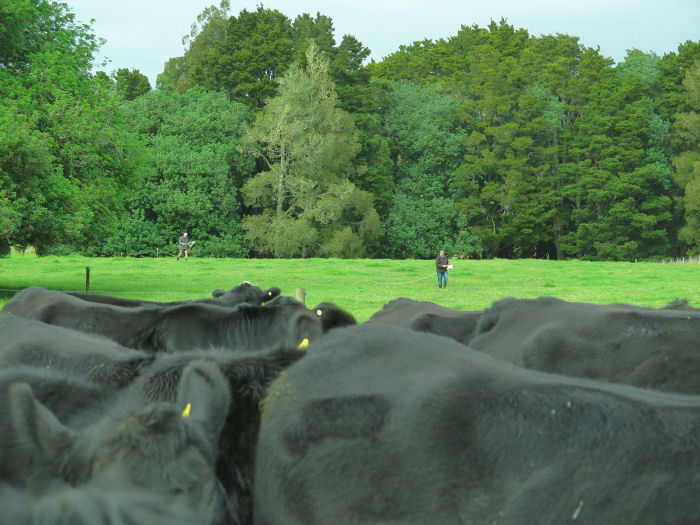 The thin/pregnant heifer mob (here in the foreground) were due to move from Flat 3 and I planned to take them to the Road Flat.  Stephan and Bernie ran a tape across Flat 4 to direct them to the riverbank gate ... 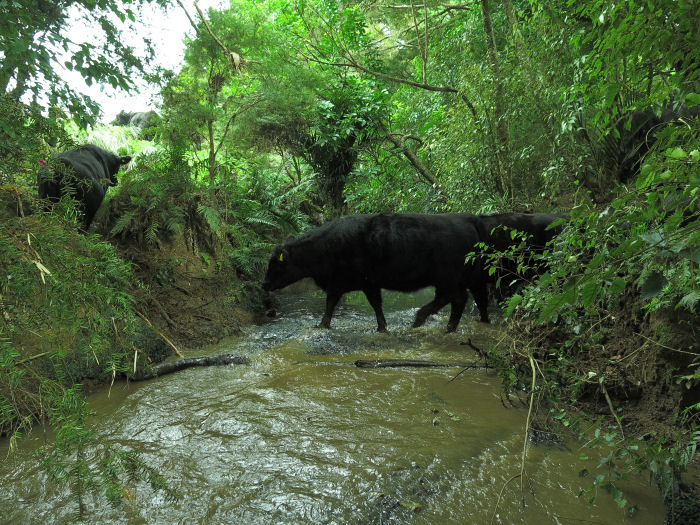 ... and I went ahead of them down into the stream, calling to get them to follow me.  Most, possibly all, of them have been across here before, so they weren't too hard to shift.

It's not a great crossing and is hard to clean up so soil doesn't end up in the stream when the cattle climb down and up the banks, since the water rises about two metres higher than this during floods, which is where most of the silt on the banks has come from anyway.  We've put lime-rock down the right side's little access, but it's under quite a bit of silt again now. 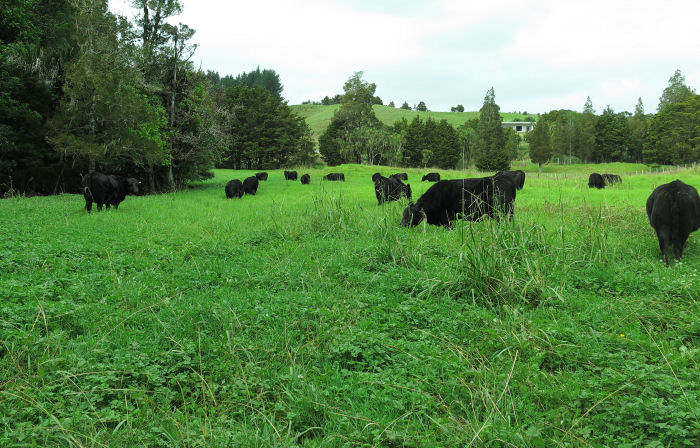 There's good feed here but far too much buttercup around the edges.  It'll keep them fed for a few days. 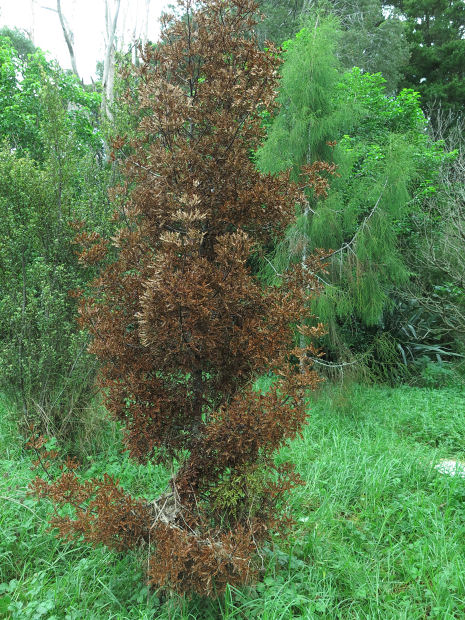 I noticed the brown of this tree from across the flats a few days ago.  It is the Tanekaha I planted seven years ago and it's almost entirely brown.  I doubt the two remaining green bits at the bottom promise any hope at all.

Has it perhaps suffered from being flooded?

Stephan attended the funeral of another of the elders of Diggers Valley today, Tom Watts, who lived just down the road and was of enormous help and kindness to the Mathew family when the house burned down in the early 80s.  Muriel, Patrick and Stephan stayed with Tom's son for some time and Tom helped Stephan rebuild the house. 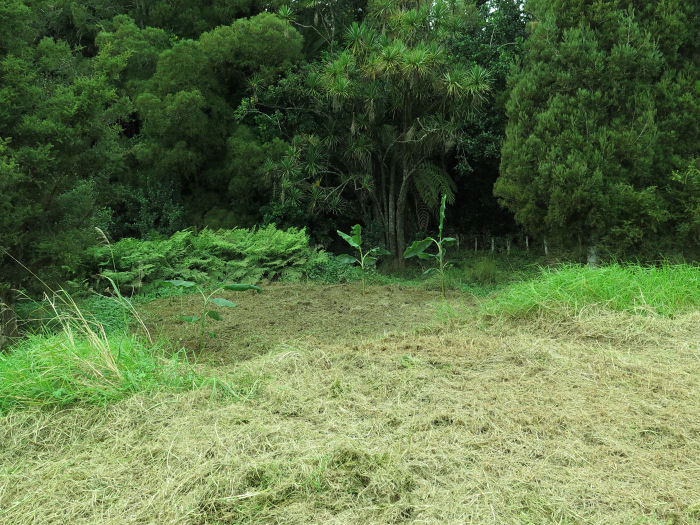 We all went up the road so Stephan and Bernie could plant some bananas Stephan had dug out of the ever-expanding patch in front of his shed.

Bernie and I did a "rubbish run" along the road on our way there, picking up a sack full of bottles, plastic, drink cups, cans, just thrown out of car windows as people travelled along the road.  Why do they do that?  They must be younger than the Be a Tidy Kiwi campaign of my childhood but how have they developed such a careless attitude?  At least we've found no dumped household rubbish in recent times. 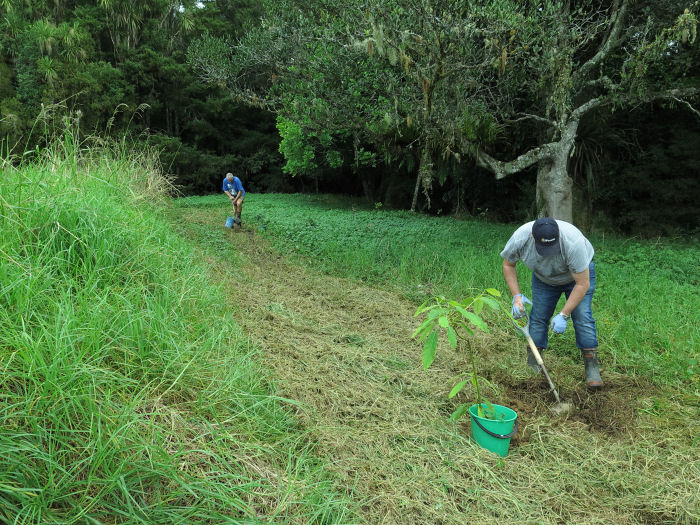 And a number of seedling Avocado trees from Alan at Takahue.  It'll be interesting to see how they grow.  Avocados turn into huge trees so hopefully this is a sensible place to plant them, down below the main orchard, at the original ground level of the paddock before the level was raised by the road corner fill.

We've noted a great deal of Pukeko mating over the last few days.  This is not usually their breeding season.  They often go as late as March but don't start again until August.  June is outrageous!