The week beginning the 3rd of June 2017.
Saturday the 3rd

A quiet day, with a visit to see Roz (my early primary school teacher) and Alan near Takahue.  Roz had big gardens full of strawberry plants that she wanted to dig up and divide before planting again and she knew she'd have a lot of spare plants.  I'd love to have enough strawberries for us to make jam!  Us?  Yeah, right: Stephan. 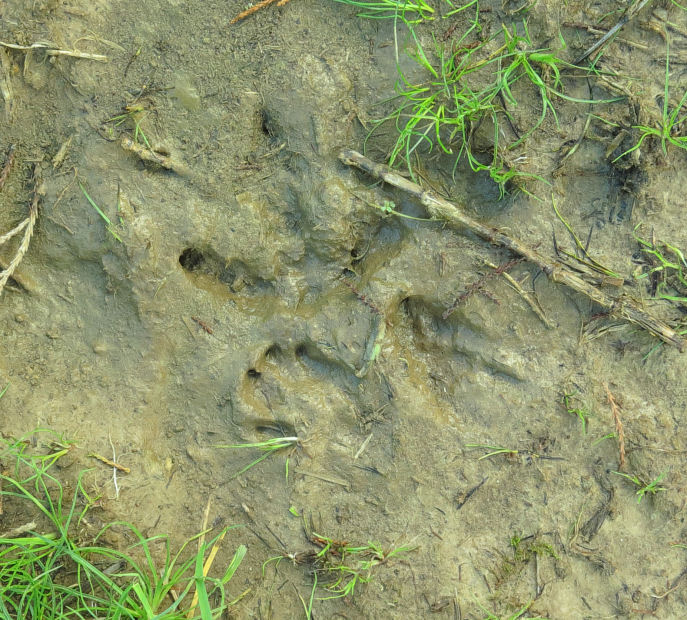 Walking out to open the Big Back North gate before moving the cows, I spotted a single cat print and then this one almost on top of a Kiwi print. 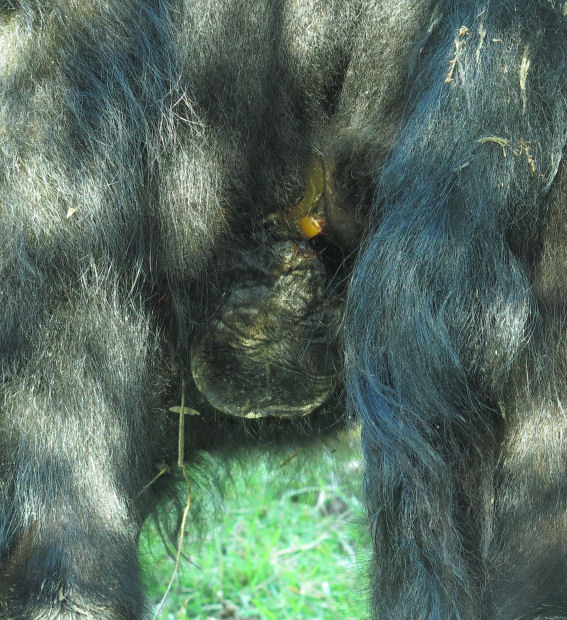 Having not seen him for a while during my convalescence, I went looking for ex-bull 163 in the Big Back South, to check that his scrotum was looking ok.  It seems to have shrivelled up as expected.  It'll be a little longer before it falls off. 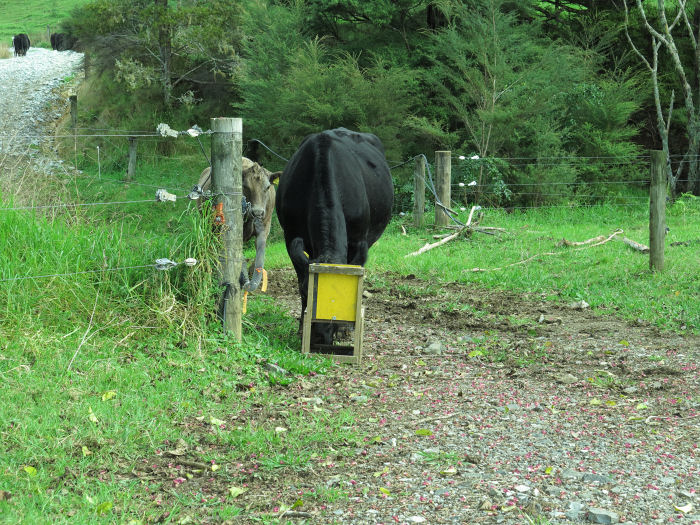 Then back to fetch the cows.

Eva and Endberly were very interested in the smell of the live capture trap, coming back to sniff it again after they'd passed.  The trap is currently baited with a dead cockatiel, since I put those poor birds out of their combined misery a couple of weeks ago.  I told Eva she'd get a horrible fright if she bumped the trap enough so the door shut!

Some of the mob had already gone over the crossing and were half-way along the Bush Flat lane, talking to the bulls up to the right in the Small Hill as they walked. 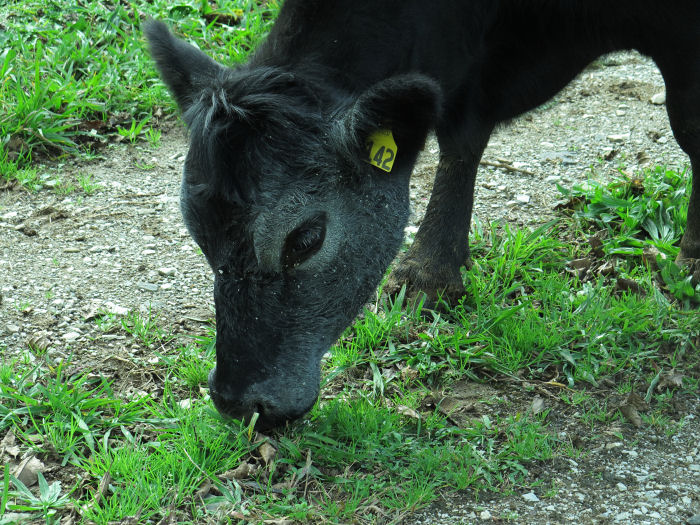 A few of them were still coming along past the Mushroom paddocks, including Gina 142, who had obviously stopped to rub her face all over the lime-rock pile. 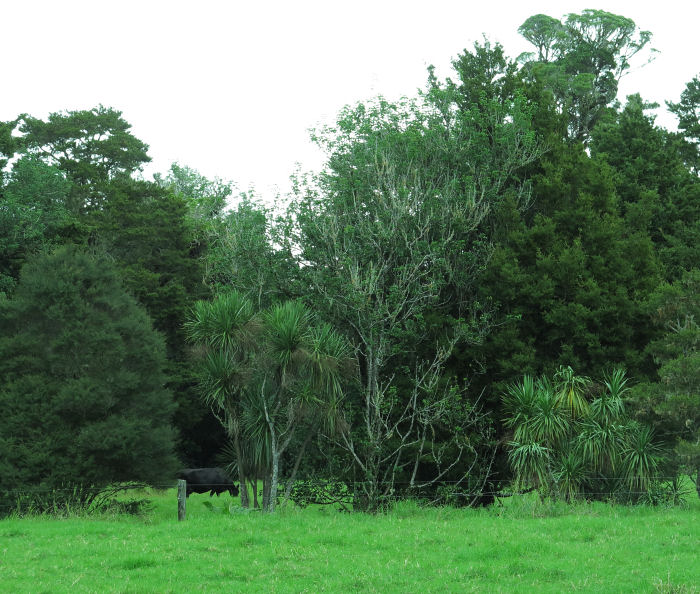 Zella and Demelza have been going in to the Chickens paddock, where the pig lives, for a couple of days, because the grass has grown very well in the several weeks the sheep haven't been there.  It's easy enough to get a couple of cows safely past the various piles of stuff (firewood, machinery, farm rubbish - wire, old posts, etc.) but I'd not want to try it with a mob of many.

Here I was watching Zella from the driveway, looking across the Pig paddock and over the stream. 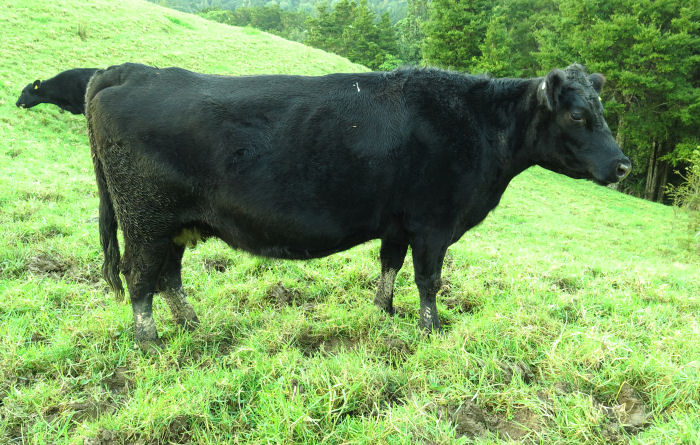 723, the oldest animal in the thin/pregnant heifer mob Over the Road.  I don't know why she's always been thin but I'd like it if I could change that.  She always raises an excellent calf (three so far). 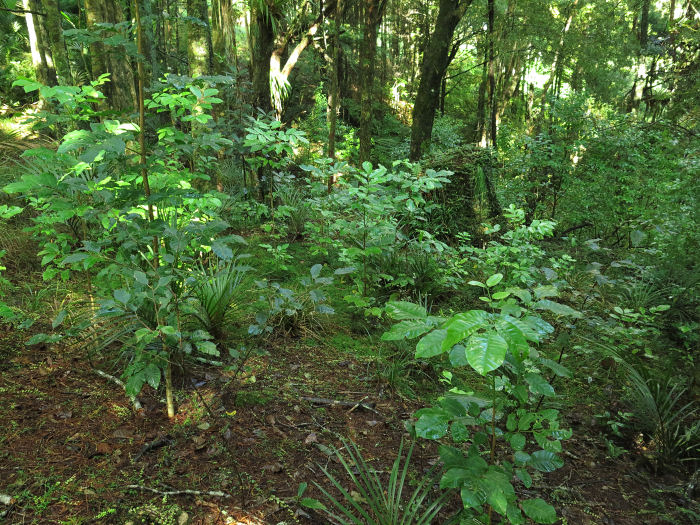 While I was walking around making sure all the cows were ok, Stephan was pulling weed trees out of the bush reserve.

It's interesting seeing the regeneration in here.  I'd have thought the outer edges, with lots of light, would thicken up faster than the darker middle of the reserve but it is not so.  All of these little trees, lots of Kohekohe, Puriri, Pigeonwood, Karaka, Hangehange, Taraire and Nikau palms, have sprouted under the big trees in the shade. 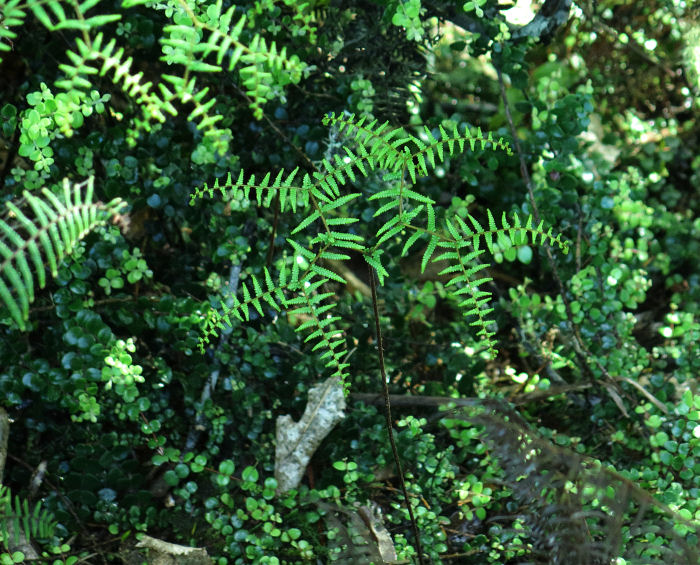 I think this is a very pretty fern.  I've seen an identification for it somewhere but can't find it now.  Help, anyone? 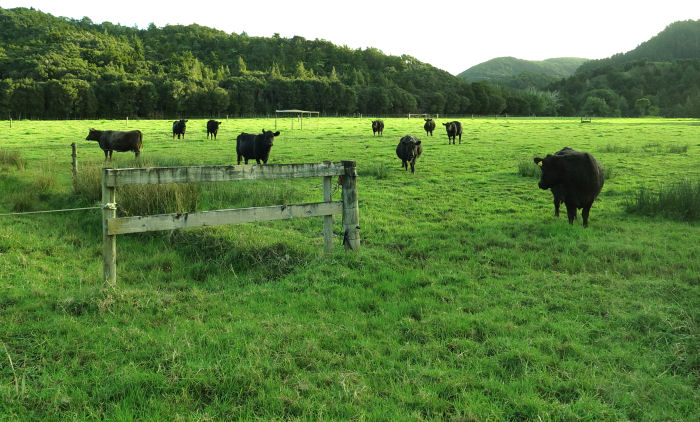 Fortunately I was at home this afternoon to receive a call from the trucking company, to say the cull cattle will go tomorrow.  I don't know why the stock agent never gives me any notice of this happening; I was about to move them to the back of the farm, figuring they wouldn't go this week.  Fortunately I had stopped for afternoon tea first.

They've been moving around the flats, since that's where there's the most grass at the moment and I also wanted to keep 475 on flat ground because of her earlier (probable) back injury.  She's been fine for the last couple of weeks. 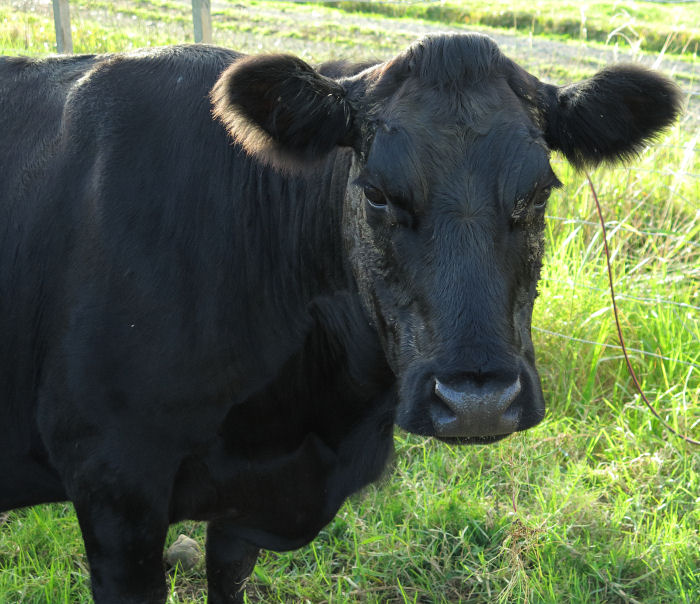 Here is lovely 475, with a bit of a shitty face, presumably from having a luxurious stretch while lying somewhere not so clean.

475 was Grey 16's last calf, born in October 2004.  She has been a delightful animal to interact with and I've spent hours brushing her beautiful, long, silky tail.  She has produced a calf every year, 11 in total, with three daughters still in the herd.

For a long time she was my cow-condition monitor cow: if 475 was in good condition, everyone else would be.  But she's been harder to keep in good condition as she's aged and she's had a fairly long life for a beef cow.  I prefer to call time for these old lovelies before they become unwell or uncomfortable and start finding life too much of a drag. 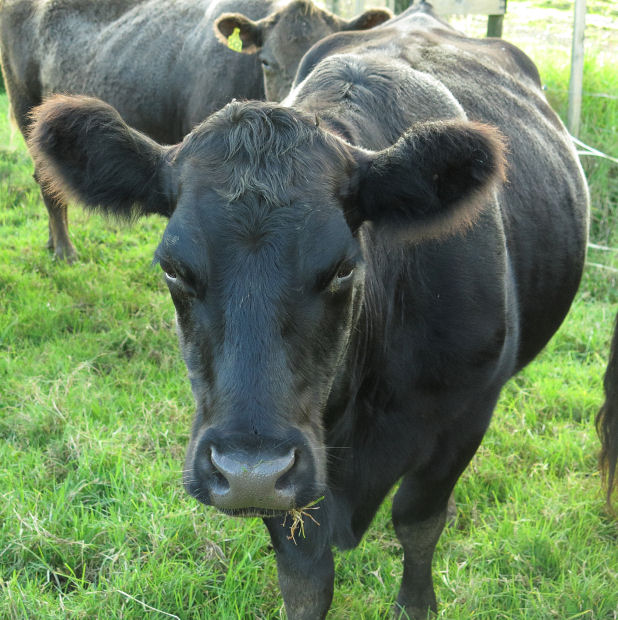 703 has not had a long life but has been a nice cow.  She's going primarily because she has been more and more twitchy at each calving, which can lead to danger for me, although she's generally quite quiet.  I don't know what has caused that gradual change but I don't want it to progress any further, for either of our sakes.

Her daughter, 743, remains - and will do so as long as her current foot problem resolves itself. 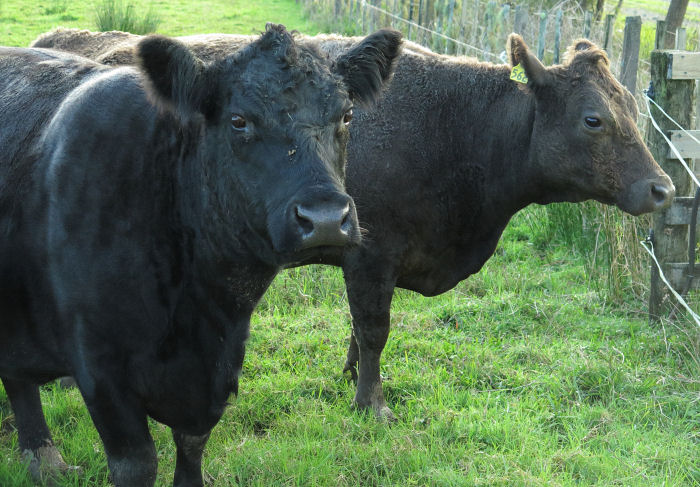 These two are hard to say good bye to, Imagen and Curly.

Imagen was born four days before 475, so is also approaching her thirteenth birthday this year.  She was Ivy's surviving twin in 2004, hence my calling her Imagen, the image of her beautiful sister, who died before she was a day old and was buried under what is now a beautifully large Puriri at the bottom of our garden.

Zella is Imagen's daughter and the two of them have spent the last few years together.  But despite living on flat ground for all that time, Imagen has begun to appear uncomfortable in her back legs and her udder is an unmanageable organ when she calves and, all in all, I decided she needed to go.  I decided that a year ago but then didn't send any cows to the works, so she's had an extra year here.  That doesn't make it any easier for Stephan or me to see her go now.

Curly has been a long favourite just because she's lovely.  She spent last winter dragging behind the other cows every time they were moved and I worry that she has something amiss which isn't much of a problem when conditions are easy, but makes things less comfortable during winter and pregnancy; so it is sadly time she went.  She's had seven calves in her nearly ten years.  Daughters Endberly, 742, and lovely young 812 are all still here.

The others on their way are:

Because some of them have lost their NAIT tags and others have never had them inserted, we had to put them up the race and insert several ear tags.  Imagen unfortunately moved her head very quickly when hers was being done and her ear was ripped.  We had to head bail her and try again.  I would rather none of that had happened but because she's so big, I didn't want to head bail her unless we really had to.  She didn't want me to stroke her again.

I filled in the Animal Status Declaration form and took it to the yards this morning, saying good bye to my lovely cows where they waited in the yards.  Stephan went over just before the truck was due and helped load them when it arrived.  He came back looking quite subdued; both of us have been feeling pretty sad about Imagen and Curly in particular and for me, 475 too.  They went on quietly and the kill-sheet said the cows were all killed before the end of the day, with the bull presumably the next morning.  I console myself that it's a quicker, kinder end than dying in a ditch.

Getting the cull cows away is always a bit of a relief too, since the winter grazing plan depends upon their not being here any longer.  But it is never easy and doesn't seem to get any better over time. 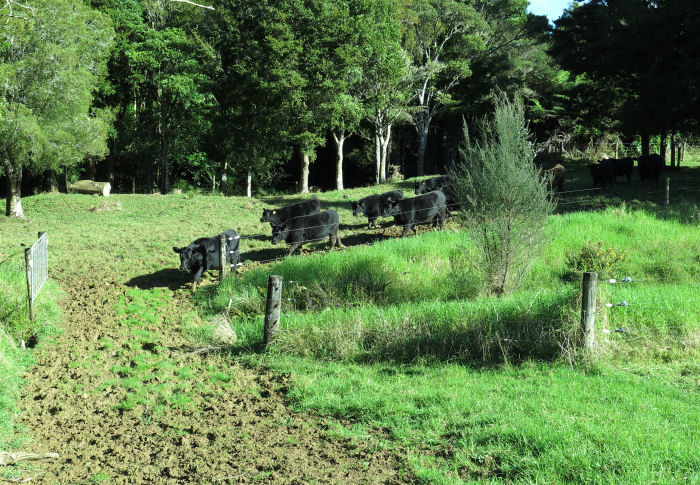 In the early afternoon I went out and moved the youngsters from the Big Back South and right around to the other side into the Back Barn.  Zeb led them out through the gateway. 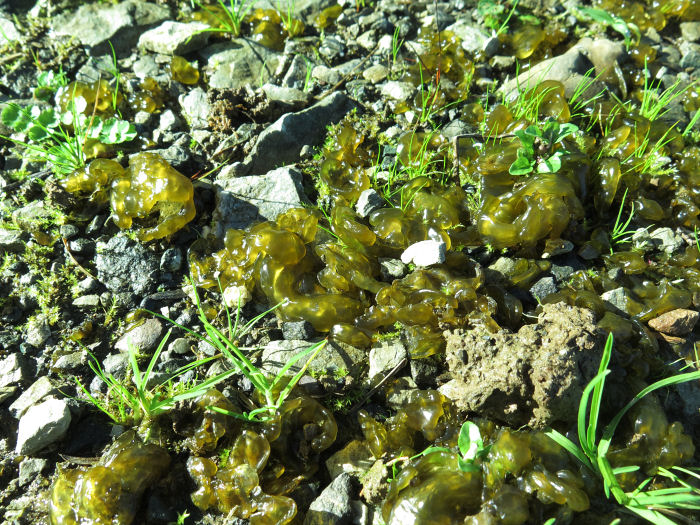 This stuff appears all over the tracks at the beginning of winter.  Fortunately it's not as slippery as it looks.

Nadene sent me this link to information on Weedy Nostoc. 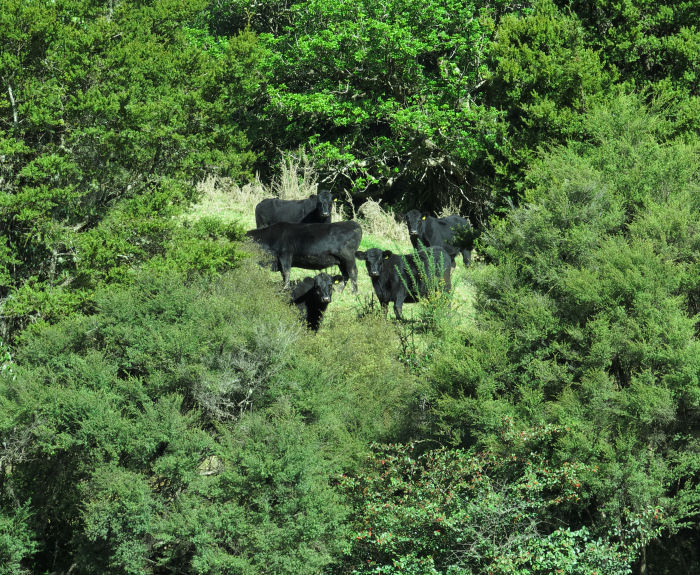 The pregnant heifers Over the Road were ready for a move, all grazing on the steep slope above the road. 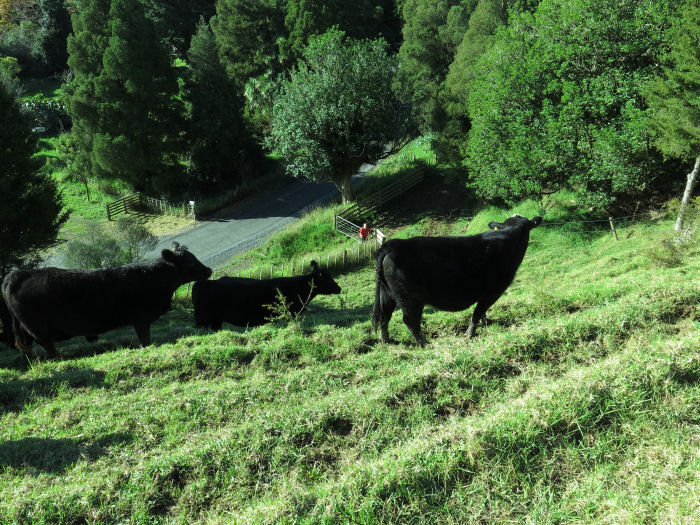 That didn't mean they helpfully came down when I called them though; I had to climb up the hill and make them move.

They went into Mushroom 1, next to the three who have been on the flats together since 743's foot got sore.  They can mix together again now that 743 seems much better. 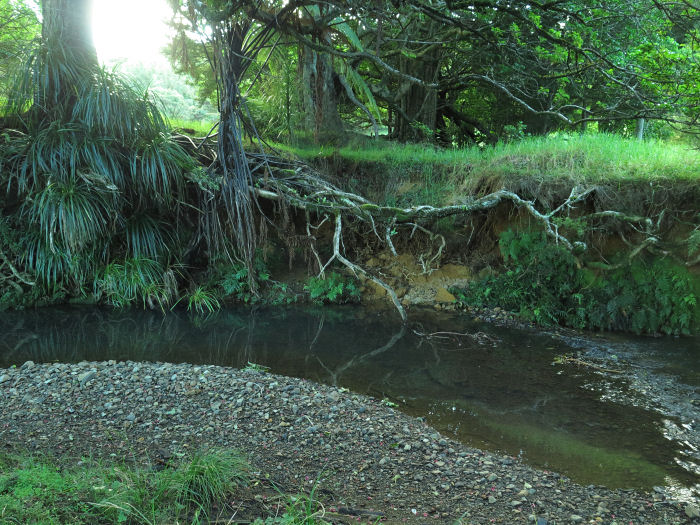 This stream-bank erosion is a worry.  There's a picture of it from years ago here (third photo down), and it has remained in that same state until the last few weeks.  I suspect the build-up of a bank of gravel has caused the flood waters to push into the corner more than usual.  Stephan might need to get in here with the tractor and dig out some of the gravel and drag it up onto the tracks which come down to the crossing (off to the right).

I had a weird migraine precursor today: instead of the usual visual aura, my teeth all hurt!  I didn't know what was going on until the headache began.  I write these things in case they're ever useful for someone else with similar odd experiences.

Stephan went out with the tractor to pick up a bucket of lime rock to patch some soft bits of the tracks.

While we wait impatiently for an Accident Compensation Corporation decision on whether or not to pay for his knee surgery, he just keeps quietly doing whatever he can without hurting himself.

There was a light frost this morning, the first of the season.  The days are always lovely after a cold start, until late afternoon, when it got bitterly cold again. 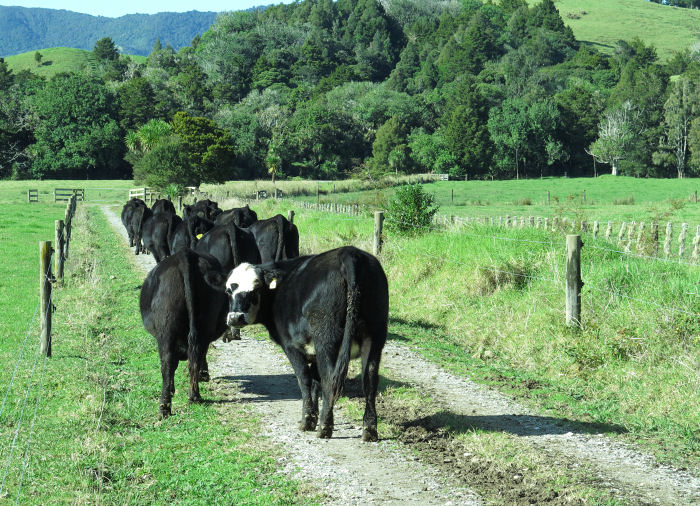 I moved the now-remixed pregnant heifers down to Flat 2.  Walking 743 for a distance for the first time, I could see she still favours her right front foot.  It's easy to see a limp in a front leg: the cow throws her head up as that foot takes her weight, to reduce the weight it bears.  That makes the uneven gait very obvious, even from a distance, as one cow's head keeps popping up above the line of backs.  She is, however, a lot better than she was and at present I'm happy to watch and wait, rather than do anything more to investigate her foot.

White-faced 787 at the back is gorgeous and surprisingly quiet.  Sometimes she seems a bit nervous of me but will then stand still as I scratch right up her neck and under her chin.  I've liked her since birth and am so pleased she's turning into a lovely animal. 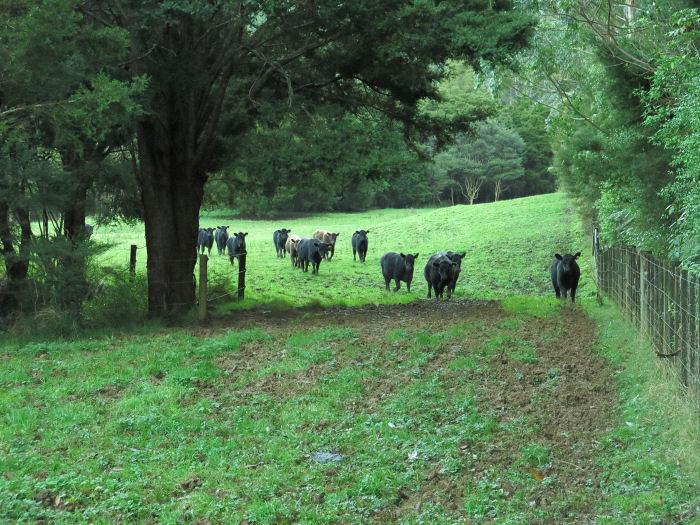 I left the youngsters a little long in the Back Barn but that's just one of the things about the beginning of winter: everyone has to slow down and put up with a bit less grass being readily available.

Hopefully I have the numbers right for the winter, so I can feed everyone sufficiently.  Now the cull cows have gone, there are 56 cattle, five sheep, one goose and I calculate there's enough grass for all of them even if the winter's cold, which it hopefully won't be.