A day at home, Stephan preparing food for his party tonight.

I didn't do very much for his birthday, but we knew that would be the case when I got the date for the surgery.  Actually, that's not entirely true: I vacuumed floors, tidied the house, washed dishes...  I wore myself out a bit and had to have a lie-down before people arrived and then needed to sit down quietly for most of the night.

Stephan had a lovely time.  Two people made him birthday cakes and there was lots of delicious food to go with the three soups he'd made.

As everyone gathered to sing Happy Birthday and enjoy his cakes, I thought of getting the camera, then stayed where I was, thinking sometimes it's just nice to enjoy the moment. 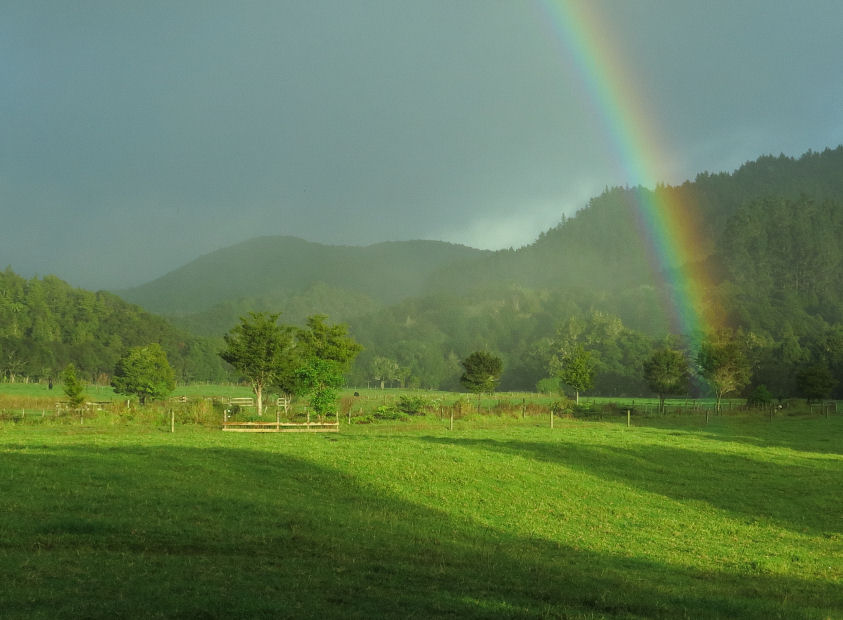 We feel as though it rains all the time at the moment.  Early morning rainbows are fantastic though, with their high arcs.  There's gold in the Windmill paddock! 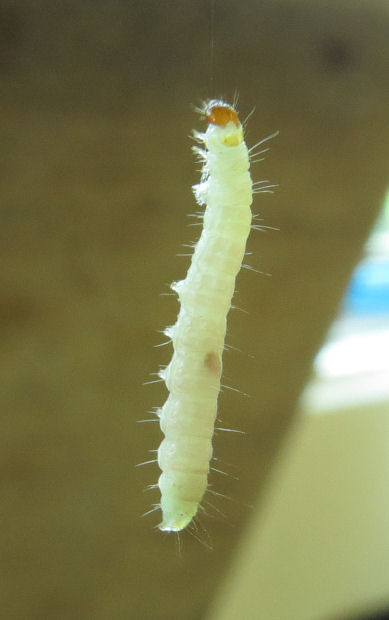 We've had a disturbing problem of late, which turns out not to have been quite as revolting as I thought.  For several weeks there have been what looked like maggots crawling across our kitchen ceiling.  But maggots don't tend to appear singly and I don't think they wander away from their food source, of which there's been no smelly evidence anyway.  We couldn't work out where they were coming from!

Eventually I had a very close look at one of these creatures, and now this one as it hung from the kitchen tap on a caterpillar thread, something a maggot wouldn't do.  I wonder if they're the grown-up versions of the minute ones which hatched from the weird dusty smudges I've found around the house, which I concluded were eggs laid by moths? 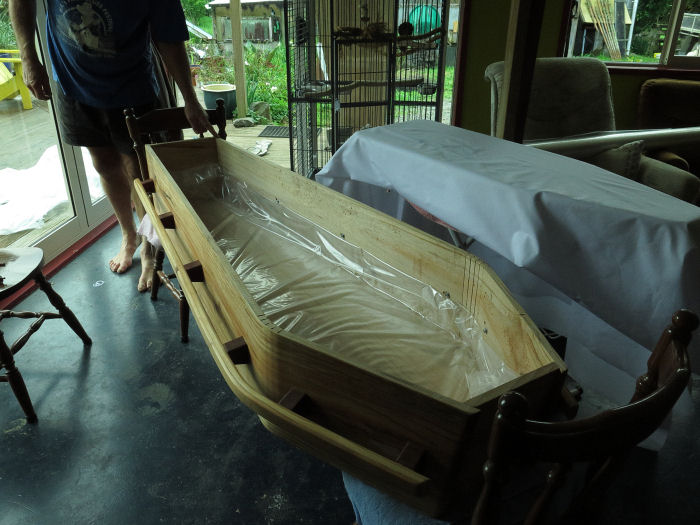 Stephan brought the finished coffin in to the living room this morning, so I could begin lining it.

It is apparently not a legal requirement to have any kind of waterproof lining but it seems a sensible idea.  Stephan has had a big roll of plastic hanging around for years, which is perfect for the purpose.  I used a double layer for extra surety and stapled it to the sides.

Then I cut some bleached calico I bought a few weeks ago, stapled it along one side and flipped it over to the inside, so the staples didn't show.

The lining was taking a while and I was concerned that we needed to get in to town sometime during the afternoon to see Dan and the family, leaving the rest of the job until later. 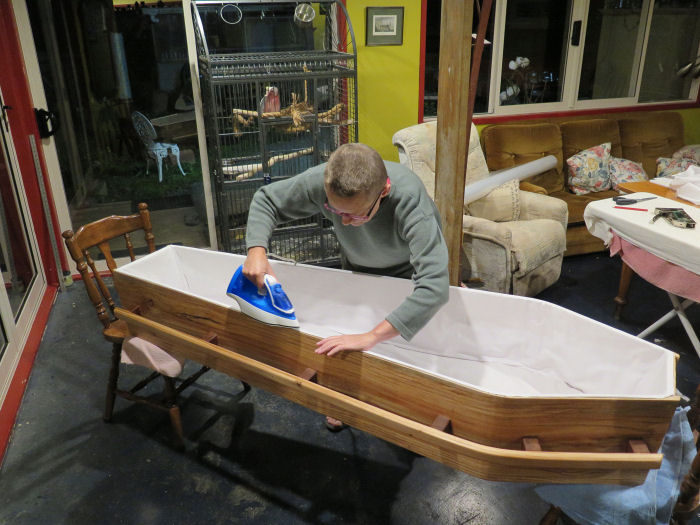 We came home to milk Zella, Stephan bringing her in in the dark just before half past six.  As he and she came past the house, the phone rang: Dan had just died.

I immediately got on with completing the lining, fortunately a now-straightforward task, since I'd figured out how I would do it this morning.

Then we strapped the coffin on the back of the ute and went back to town.

It was Dan's preference to have his funeral organised without the extremely expensive 'help' of the local professional Funeral Directors.  Several weeks ago, as the coffin-building got underway, we had conversations about how that could be managed and I'd offered to find out how to make the arrangements.  I started by ordering a very useful booklet from www.diyfuneral.co.nz, and set about obtaining the forms I'd need when the time came and making lists of things I didn't want to forget.

Monday's first job was to coordinate the funeral arrangements, making sure the planned venue was available at the time we'd decided upon, arranging for the digging of the grave and the placement of notices in the paper.

The family spent the next two days writing the eulogy and creating a lovely 'order of service' leaflet for the funeral.

We travelled in and out from home at least twice each day, Zella still requiring twice-a-day milking and other animals having to be fed or moved.  Stephan went off to see a movie without me, with tickets he'd been given for his birthday.  I would have liked to go but it was important that I stayed with the eulogy writers during that evening.

Just before 1pm on Wednesday, several of the family helped Stephan put the lid on the coffin and carried it out to the back of our ute, in the rain.  With Christina and Emma beside me in the cab and leading a procession of vehicles, I drove up the road to the cemetery.  There, there was a sea of umbrellas, under which a crowd of people waited in the rain.

After a short ceremony we buried Dan, and then people gradually made their way to their cars and down to Te Ahu, our community centre in town.  There I read the eulogy, then others took the floor for their own remembrances and tributes.

A number of Christina's friends had provided the refreshments for after and put on a fantastic spread.  It felt like a real community effort and enabled a lot of us to be supportive in meaningful ways.

Stephan and I found it an enormous privilege and pleasure to do this for Dan and Christina and their families.  In the awful moments after someone dies, it is entirely understandable that people hand over the funeral arrangements to Funeral Directors but keeping it within the family had, I think, great value.  Everyone had the freedom to be as involved as they wished, without any sense of restrictions around what should or should not happen.  Being just outside the inner circle, I could get on with the arrangements while also remaining in close contact with the people for whom I was doing it.  I hope I did all they hoped for.

If you want to know more about the steps we went through, please feel free to get in touch.  It was not difficult, especially for someone who likes organising things.  I had a conversation with one of the Hospice nurses at one point and we may go on to create a leaflet outlining how to organise a funeral in our local community, with all the local contact details.

Thursday the 1st of June

I was fortunately able to get an appointment with a nurse at the medical centre, for a wound check as directed by my post-op instructions.  There is no problem, but I thought I'd do as I was told.  Fancy that!

I should probably also get some rest.  I stood up for far too long yesterday and really felt it by the end of the day. 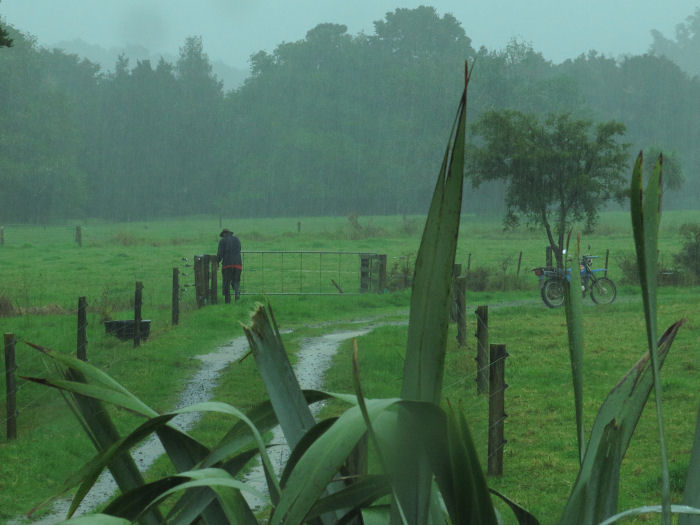 In the pouring rain I asked Stephan to go out and move all the cattle (I'm still sore enough not to want to ride or walk around too much).

In the same downpour, Christina arrived with Dan's eldest son and his family, for a visit before they head home again.  After everyone had been thoroughly soaked, the rain stopped and the sun came out.  Typical.  Fortunately I've been keeping the fire going most of the time during the cold days and so clothes dried out again quite quickly.