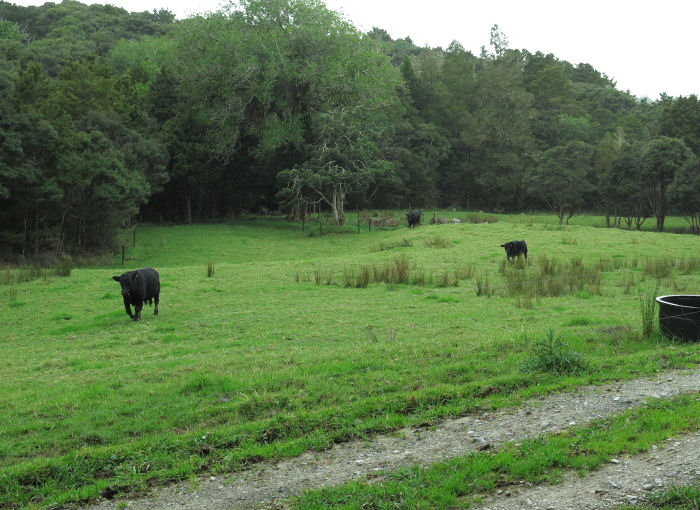 I like it that the bulls are so well behaved.  They don't always respond immediately to my call but they do come.  Much easier than having to walk around paddocks and chase them out the gates. 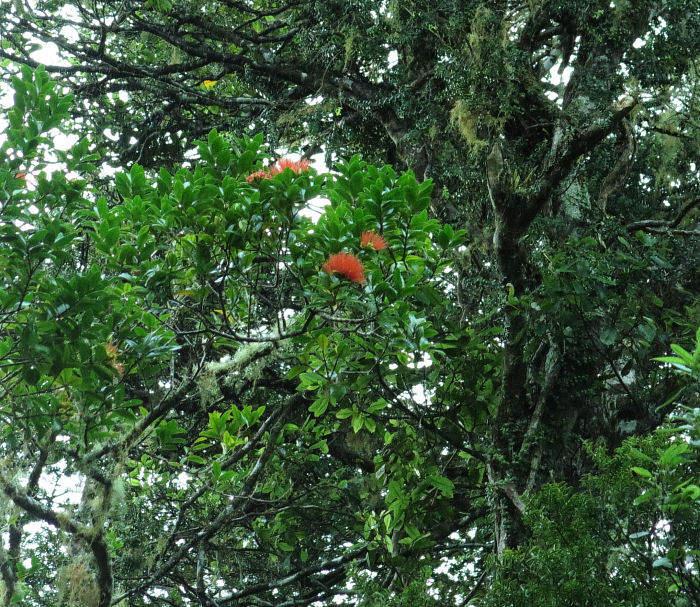 The Rata Vine, Metrosideros fulgens is flowering.  They're not as showy as the big Northern Rata but provide a nice colour surprise as the weather cools and things get wet and muddy; although you have to be walking along looking up to actually notice them. 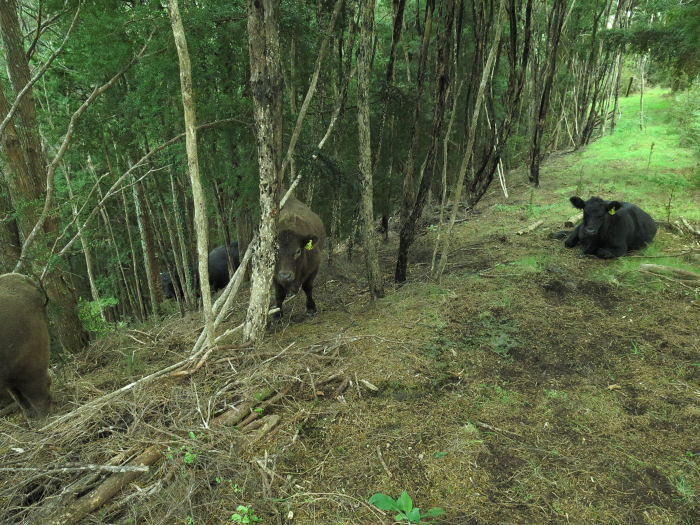 The young cattle are in the Tank paddock and I had to climb the steep slope above the tank to find them this afternoon.  Here I was looking down into the trees to count those I'd not yet seen.

When we get around to sub-dividing this paddock, we'll fence off the steepest part of this slope, since it provides no value in grazing for the cattle - although they probably quite like being here because it certainly provides some rain and wind shelter.  It will be possible to leave significant shelter to which they have access. 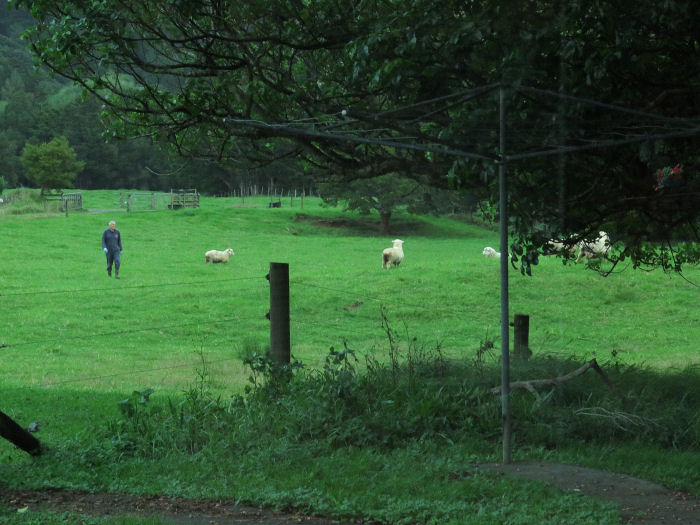 The oldest ewe was cast this morning, so Stephan righted her as he went to fetch Zella in for milking. 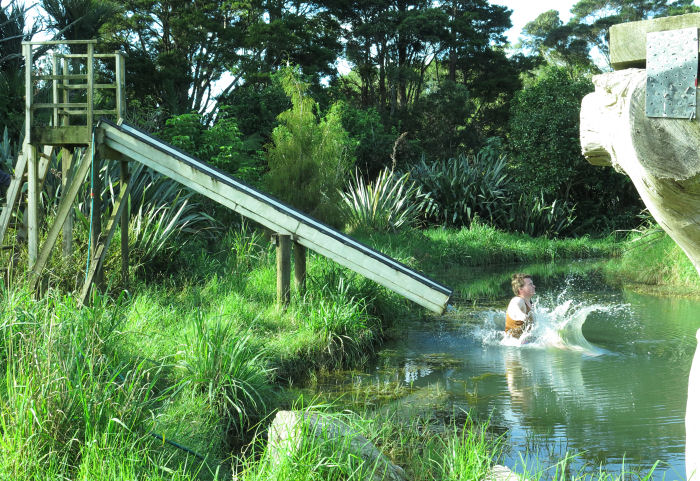 Our new neighbours came over for lunch, before Campbell entertained us for a while in the pond.  I suspect he may be back for more, with a sibling or two! 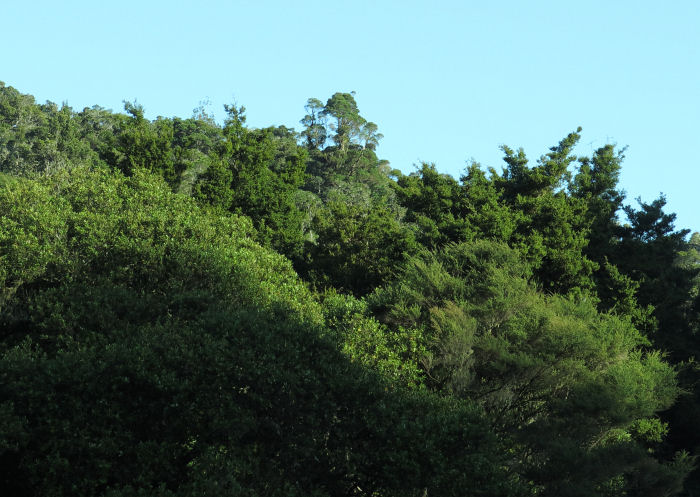 Then we went for a walk in the Bush Flat reserve, which is an easily accessible and lovely place to walk in regenerating forest.

This is the skyline beyond our place, up in the Buselich Reserve, where there are many large Northern Rata.  I've started taking pictures of them because if the recently-discovered Myrtle Rust fungus spreads to us, these trees may well disappear.  That would be a tragedy but I fear we may have to face it.  Similar trees in Hawaii, where the rust has reached, have reputedly all been killed. 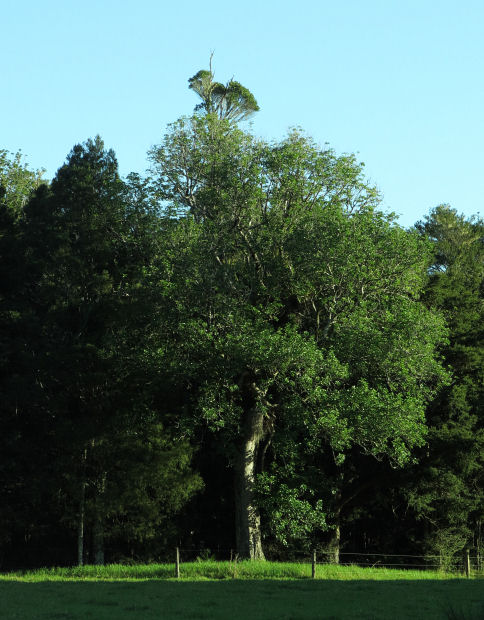 The highest tree here is one of the two independently-standing Northern Rata in the Bush Flat reserve, behind and across the stream from the big Puriri on the edge of the paddock. 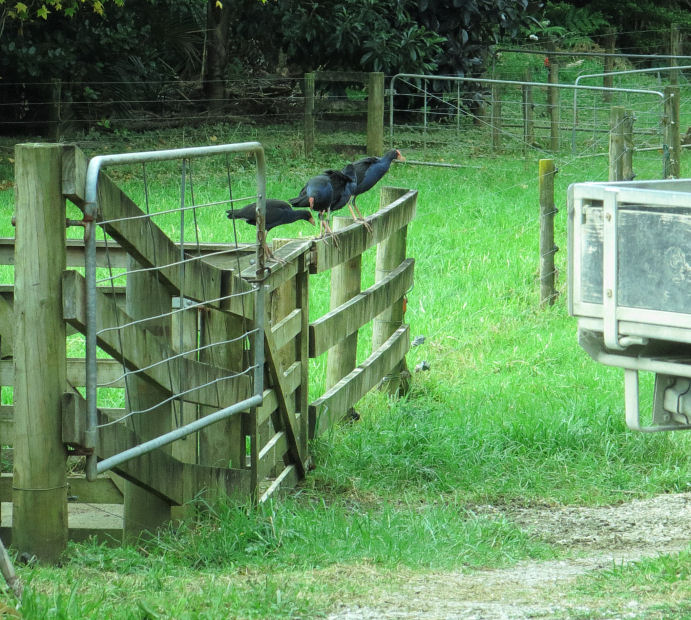 A lot of alarmed Pukeko squawking drew me to the window this morning, to see a little tabby cat slinking across the driveway by the house.  It was the same cat I saw climbing the aviary netting a couple of weeks ago.  Most of the Pukeko had flown up onto the milking area railings and stayed there until some time after the cat had run away.  Stephan set more traps and caught it a few days later.  It would have been another dumped kitten. 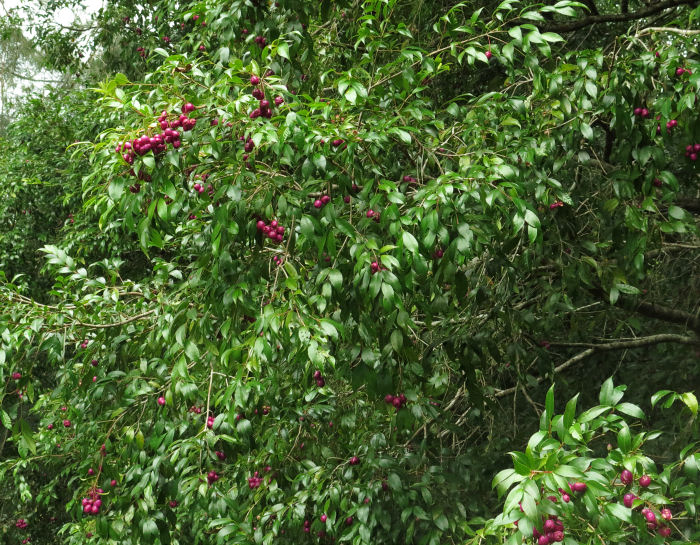 The awful Monkey-apple trees on Jane's place are now fruiting, spreading seedlings far and wide as the Kukupa like to eat whatever's going and then carry the seeds out into the bush.  Jane won't cut them down, intensifying the environmental damage year after year.  We keep pulling them out, cutting them down, poisoning them wherever we find them in the surrounding bush, but we can't find them all. 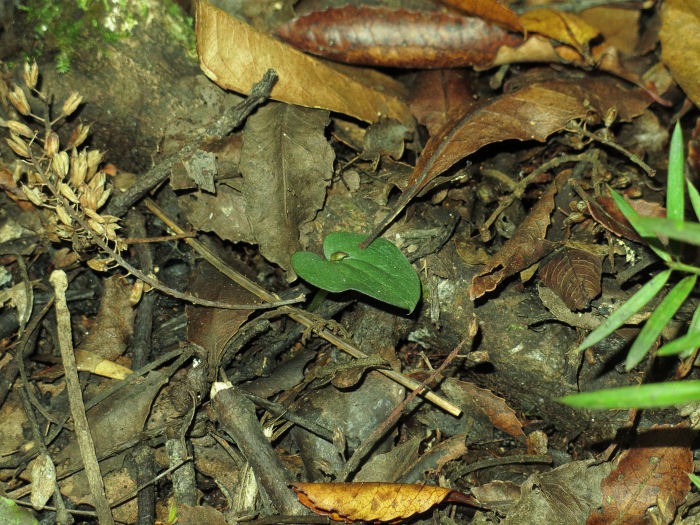 I went looking for germinating Taraire seeds in the bush around the big pine tree we felled, but it's too early for them yet.

I found a few of these orchids: Anzybas rotundifolius.  I'm always glad to find them, this being the only spot in which I've ever seen them around the farm - which doesn't really mean much, since they're tiny and might be anywhere. 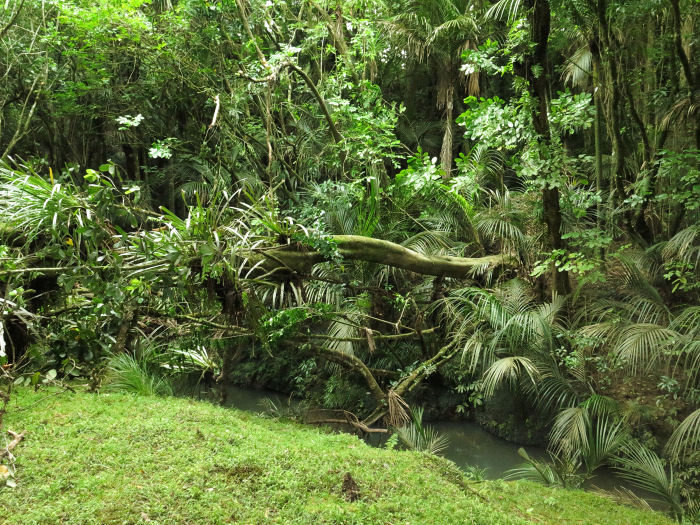 As I walked back along the road, which runs along the top of this photo beyond the trees, I looked down into the end of the Chickens paddock (which is where the pig lives now) and noticed this fallen tree.  I collected Stephan from his workshop and we came to have a closer look at it.

(The orchids above are just up a steep slope to the right of this photo.) 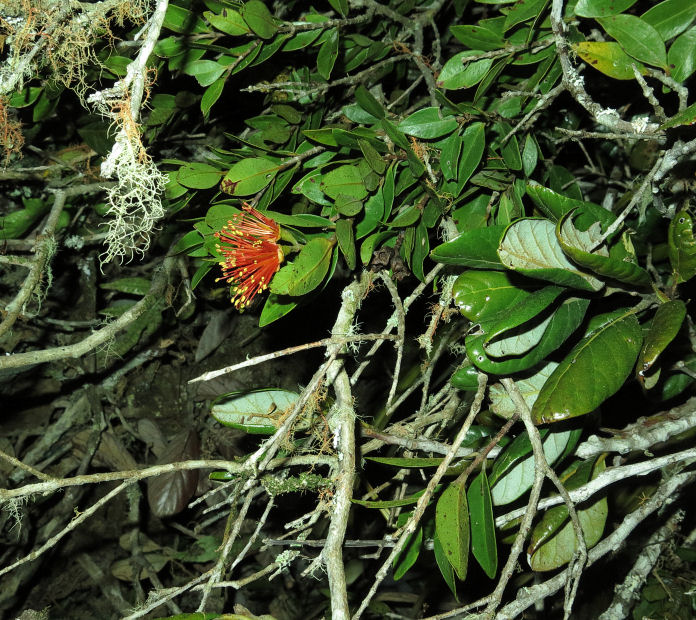 The tree is Taraire (the leathery leaves in the middle right of this picture) but there's also a large, flowering Rata vine growing in the tree.  Here is one occasion I've not had to be looking up into the treetops to see these flowers.

Because we've oodles of firewood and can have our fire going on any cold day (of which there are starting to be quite a few), our wet-back heats lots of water for a bath in the evenings.  It's a bit of a physical shock, going out onto the deck on a cold night to get into hot water, but it's lovely once you're in.  We shine a light through the window from the living room so we can read while lying there.  If the water's really hot, by the time you get out into the cold again, you don't even feel it.

Bathing in the garden bath by the pond rarely happened in the winter, because it was too cold and muddy; but on the deck it's easy.  One day we might have a bathroom with a bath but bathing outside is a special experience, especially when watching the full moon rise over the trees, or listening to the rain falling on the roof. 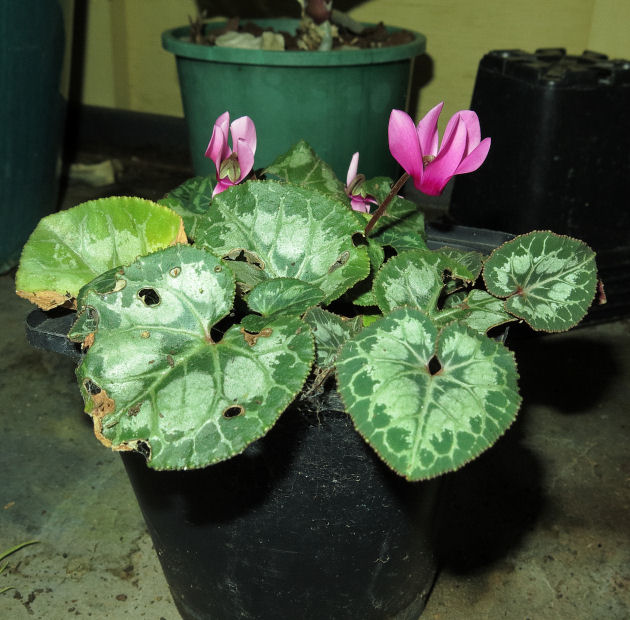 I brought this pot up to sit near the Moth orchid when I'd pushed some cuttings into it and wanted to keep them watered.  The cuttings failed but this cyclamen grew where I'd forgotten it had been before.

I quite like potting plants and growing things but it's always an activity for times when there's nothing else more pressing to do and that never happens these days.  The greenhouse often goes unwatered, plants die, then I go in and feel all bereft about my lack of attention to them and water the whole lot; and then forget about them until the next time I remember with a start, and go through the whole thing again. 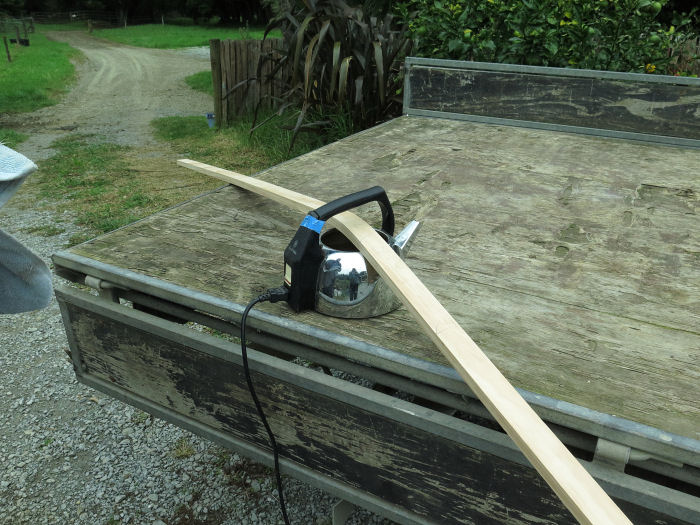 The original plan for the coffin we're building was to have simple rope handles.  But then Dan decided he wanted a solid handle along each side and so bought and brought out some timber for Stephan to make them.

This is how Stephan has been bending each piece: put it over an old electric kettle (powered via a circuit-breaker for safety), cover with a blanket to keep the steam in and then boil it every few minutes to keep the steam going. 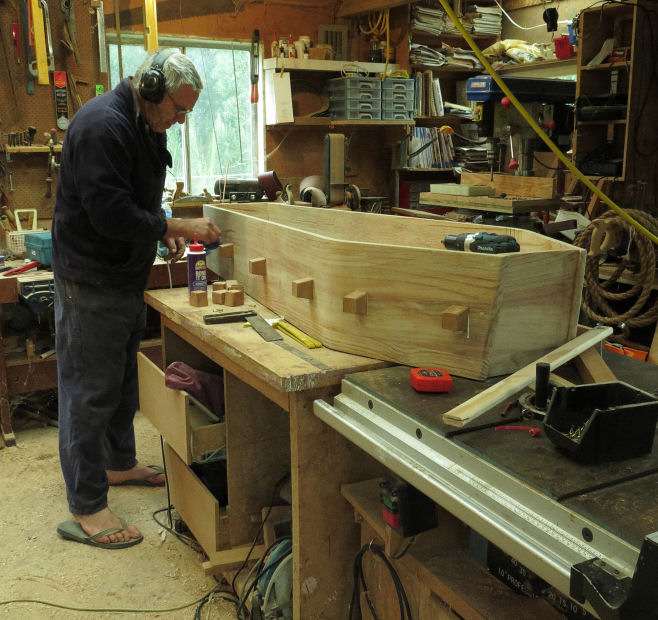 We talked about how to attach the handles and I suggested some bits of Totara from some of the trees cleared in the last few years, which led Stephan to think of using an old fence post, so those bits are very old and a lovely colour.

I also suggested he might as well have several points of attachment, for extra strength.  It could be carried by any number of people then too.

No breakfast for me and in to the hospital Day Surgery Unit by eight o'clock this morning, for my hernia repair surgery.  The general anaesthetic experience was a bit different from other times, a gentle sort of floating away rather than the faint-like dark curtain I've felt before.  The lovely anaesthetist had looked up what I'd had last time, tweaked it a bit and I woke up feeling just fine, no tears, no nausea, talking nineteen to the dozen to the theatre nurse who was with me.

When I came home, I had a disturbingly numb right thigh, which was apparently caused by some local anaesthetic used in the operation.  It took a lot longer to wear off than the post-op instructions suggested.

Inguinal hernias are usually experienced by men, with only 5% occurring in women, and the post-op instructions completely ignored the 5%.  There was a lot of detail about how the bruising might affect my testicles and scrotum, which made for some hilarious reading to friends.  I seem not to have had any trouble in that regard, although the abdominal discomfort has been significant.

My general practitioner expressed doubt about a laparoscopic repair but I was comforted by the confidence and details in Andrew Bowker's website and am relieved to have had a repair done which doesn't require extreme care over the next several weeks, as would be the case with open abdominal surgery. 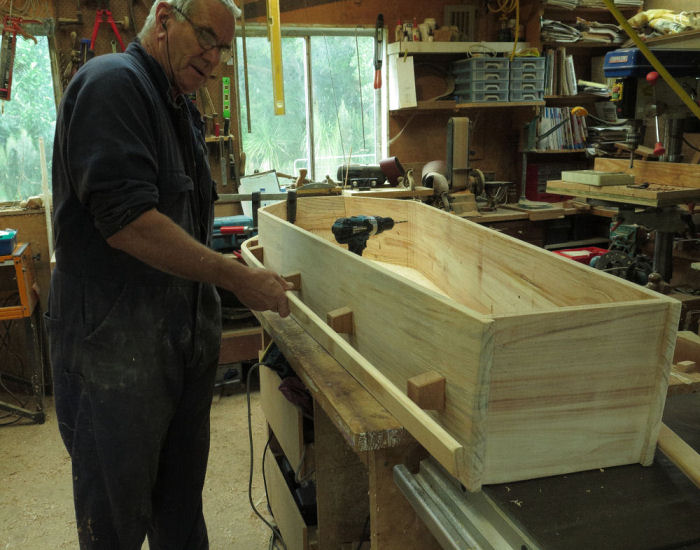 Stephan returned to work on the coffin and I occasionally quietly walked out to see how he was getting on. 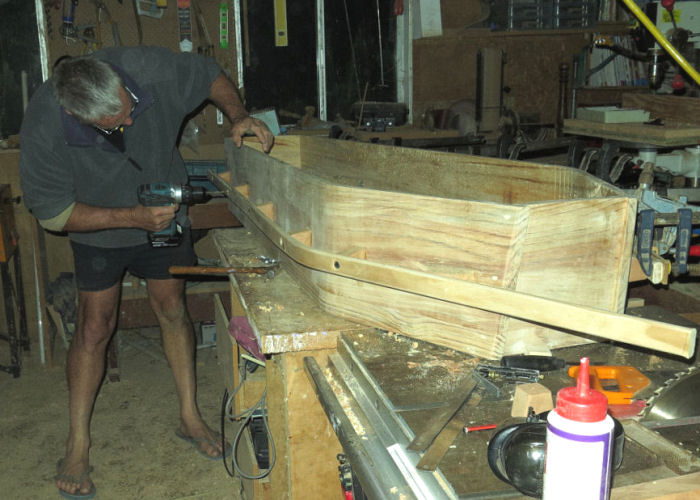 These counter-sunk bolt heads will disappear under a piece of thin Totara Stephan will add to the handle. 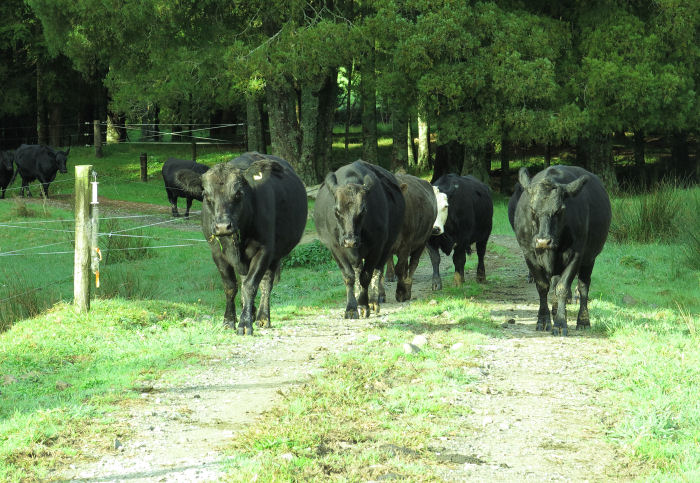 My post-op instructions were extremely optimistic about how I'd feel in recovery, encouraging a brisk walk today.  I tried, but it wasn't brisk.

The cows followed me out to the Pines in the sunshine.  The twins are the two on the left at the front. 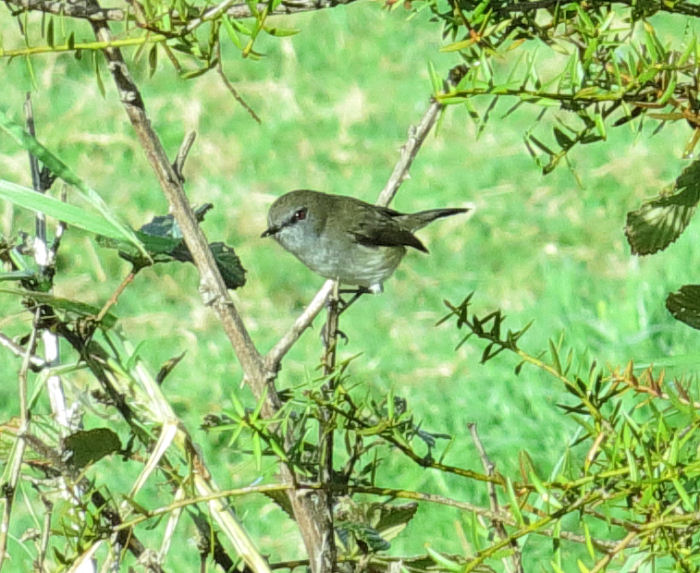 On the way home, I watched this Riroriro, Grey Warbler, in the Totara trees along Flat 1.  I don't often see them very closely, because they spend most of their time high in the tall trees, hunting small insects.  They are the species which raises the Pipiwharauroa or Shining Cuckoo chicks, which are about four times their size and weight. 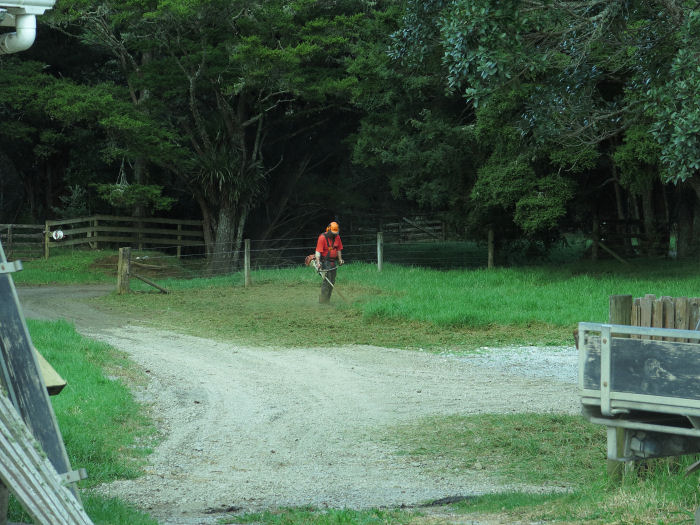 Today, Stephan turns SIXTY-FIVE!  Tomorrow night he will have a small gathering of about 16 friends and family and this is the parking area he wishes them to use. 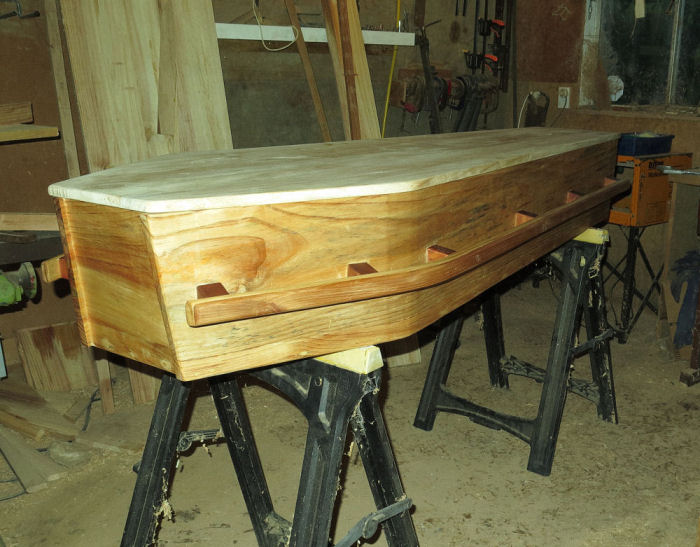 The coffin in the workshop, before Stephan finished it by polishing the lid.

In other parts of the country we know there are "coffin clubs" in which people build their own or friends' coffins as required, or in preparation for later.  Up here there is no such movement so far.

Somebody said to me that we should lay our hands on it and fill it with positive feeling; I wanted to say, what do you think has been going on for the last several weeks while we've been planning, designing and building it?

For us, one of the nicest parts of the process has been that Dan has been very much involved.  Unfortunately he's no longer well enough to come out here to see it, so we've been sending regular progress photographs.