The week beginning the 2nd of June 2018.
Saturday the 2nd

Rain, all day and so a flood.  And a phone call this morning from a young neighbour to say he'd lost eight calves from his shed overnight.  He told Stephan he'd followed their tracks to the base of the hill into the bush along our joint boundary, then he'd gone home for a rest.  Later he gave me a different description.  We asked him to let us know when he found them, so we would know they weren't on our place anywhere but when there was no more contact after several hours, we rang him to ask if he'd found them and then went out to ensure they weren't anywhere on our side of the boundary. 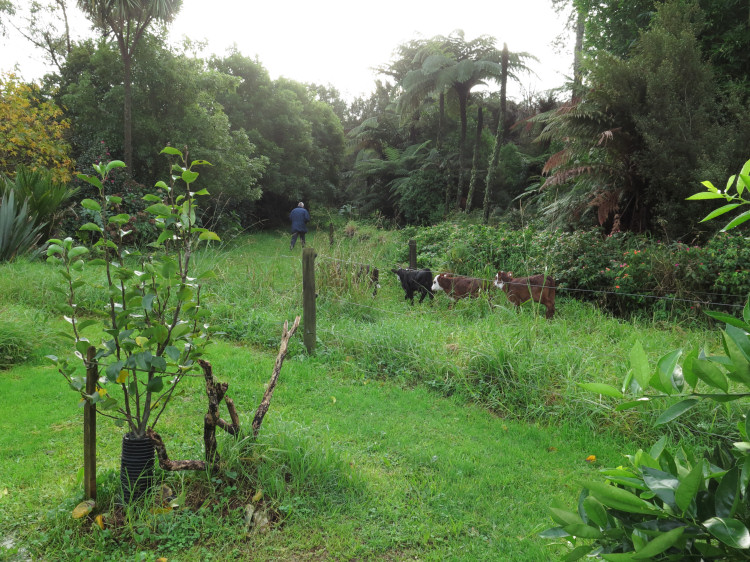 And here were five of them, on Jane's place.  It later transpired that they'd gone into the deep drain (chased by uncontrolled dogs, perhaps?) between the young guy's last sight of their tracks (he'd followed their tracks on his quad-bike to the edge of his property and not got off to look any further) and scrambled up the other side and were milling around where he'd have found them if he'd walked a few metres.

Operating, as we were at that stage, on the report of their having come through the bush, Stephan led and the young guy, having responded to my phone call to tell him we'd found his calves, followed them and they walked them through the bush, back along the other side of the flooded drain. 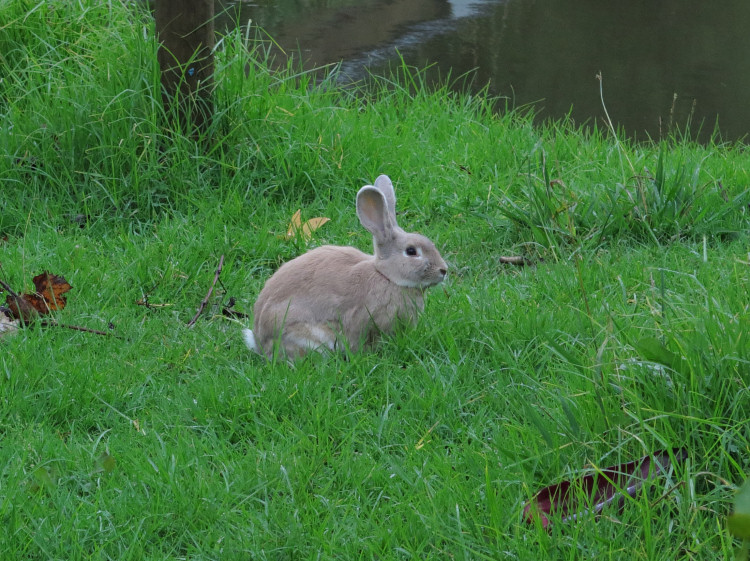 Here's a better photo of the big soft rabbit.  I'd love to stroke those beautiful ears! 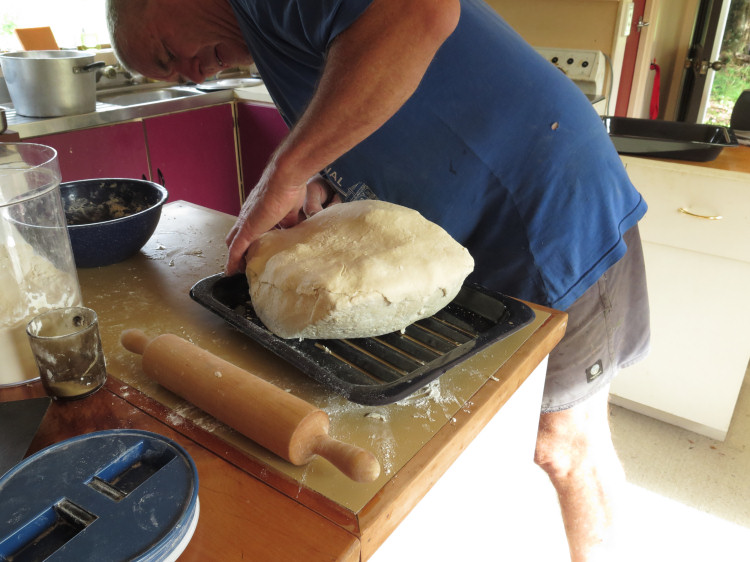 Stephan preparing a ham for dinner tonight with special guests.

In my seventh-form year at Kaitaia College, a new student arrived a few weeks into the first term, from outside the district.  Cathie and I became firm friends and after school when we both moved to Auckland, maintained close contact for a few years until she and her family moved away from the city.  Recently we've found each other again and so she and Andrew came to stay for a night while they were up north.

It was so lovely to see them both, extraordinary to be together again after so long, now that we're all the age our parents were when we were last in touch.

We went for a stroll while I checked and moved some cattle.  On the way back across the flats, I heard the call of a small, lost calf, from somewhere in the vicinity of the Tank paddock!

Stephan took Andrew with him to go and find the animal.  Despite being two days without feed, the little calf was very lively and they couldn't catch it.  By radio we talked about what next and I set out with the sheep crook, hoping that might help, which it eventually did - except I didn't personally help much, having tried to run the calf to ground in a corner from which it escaped and then hared off with us all in pursuit across the extremely boggy paddock. 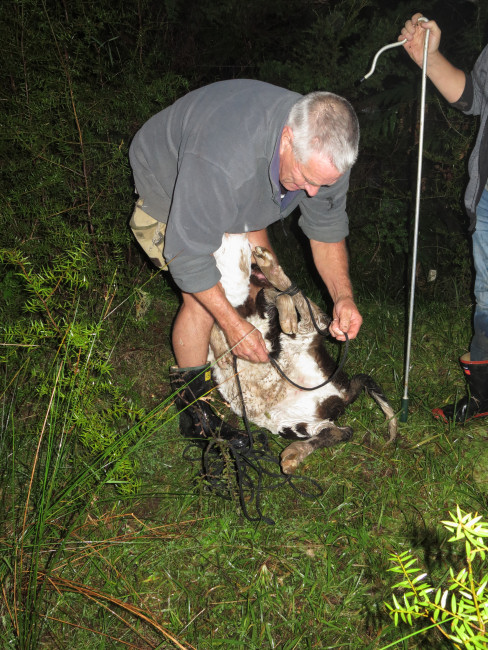 Stephan and Andrew eventually cornered it again, pounced on the calf and stopped it.  Stephan tied its legs together so it couldn't escape and the two of them carried it back toward harder ground, while I ran off to bring the tractor.

The young owner of the calf met Stephan at the front gate and without apology or thanks, slung the poor thing onto his quad and left.  The two other missing calves had apparently reappeared in the mean time but he'd forgotten to let us know.  I wonder if this small animal will survive?

I remain astonished that the young man did so little to look for his calves.  They're tiny babies, in need of regular feed and shelter.  We looked because we wanted to ensure they weren't anywhere here but their well-being is not our responsibility.  We will now have to quarantine Jane's paddocks and our own Tank paddock for the winter, which is not a good time to be losing grazing areas.

My concerns in regard to disease are the usual ones for my herd: BVD in particular, which would threaten their pregnancies and calves but at present also extend to Mycoplasma bovis, from which we felt relatively safe until today, with a closed herd and usually sound boundaries during the time the disease is believed to have been in the country.  While these calves came from a relatively safe source, I don't know how they were transported here, if they had contact with other animals along the way, and so on.

Until recently the neighbouring property from which they came has been home to an elderly resident who had a large garden, orchard and a lot of regenerating bush.  If there are going to be cattle on the other side of that boundary, there's going to have to be some serious fencing work done.

We spent a lovely evening over a now-late dinner, since preparation had been interrupted so late in the day.  Andrew appeared undamaged, despite having got a great deal dirtier and wetter than he had any reason to imagine he might have done during a friendly visit.

A leisurely start to the day with breakfast and coffee, while rain poured down outside, before Cathie and Andrew went off on their way south again in the early afternoon.  After they left, we both slumped back into our currently normal gloom.  We miss William; distraction was very comforting.

Around 100mm of rain has fallen in a couple of days, and the heavy downpours this morning had raised the stream levels out the back of the farm.  When I reached the crossing at the end of Mushroom 3, I had to find a new way to get across the water.  I walked upstream through Mushroom 3, climbed through the fence into the riparian reserve and crossed the natural bridge formed by the thick roots of the Totara tree, under which the stream has channelled its way through a new course.

With a bit of judicious pruning, that will become a very useful way to get across the stream when it floods.  Previously we'd tried setting up a foot-bridge and rail a little way downstream but those sturdy pieces of Kanuka had been washed away in subsequent flooding. 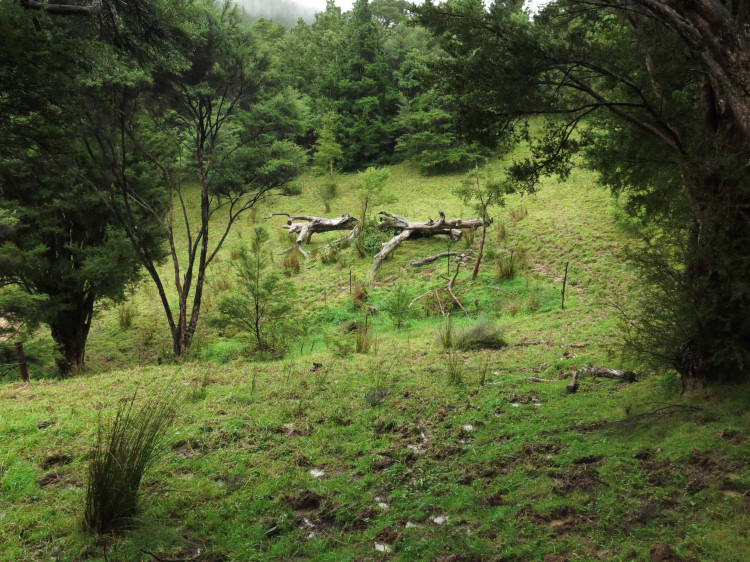 The 24 cows were in the Big Back North paddock and I walked up the hill to look for them this afternoon.

This is the top of the first gully in this paddock and the green area is a fenced exclusion zone around a deep hole, where water running underground has undermined the land.  There's another slumped area, also fenced, down to the left and then the main gully is fenced all the way down to the swamp at the bottom of the hill.  The holes have long concerned me and it's a nice feeling knowing they're safely fenced so the cattle can't fall into them.

Cattle are usually quite sure-footed and cautious about where they put their feet but a push from behind or unexpectedly unstable ground can lead to trouble. 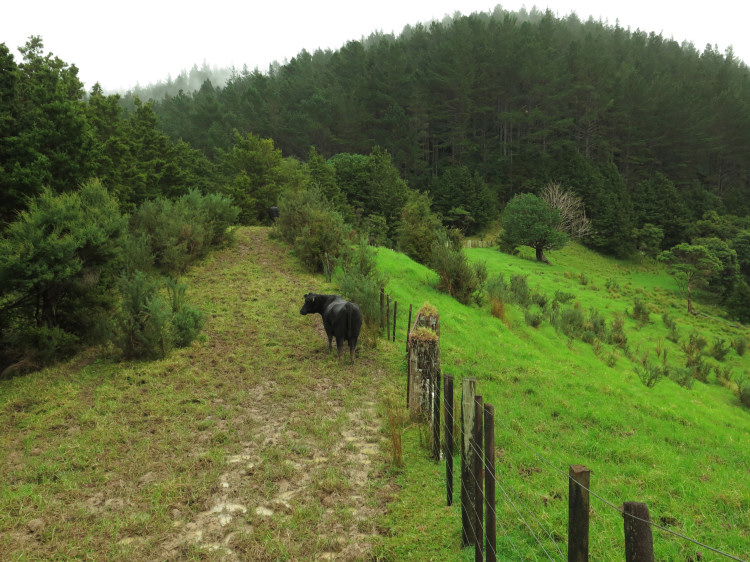 Conveniently, since I wanted to shift them into the Middle Back paddock on the right, most of the cattle were on or near the top ridge.  The ground is (obviously) hideously waterlogged.

The cows all came up to my call and I let them through the gate into that lovely fresh grass.  The Kikuyu has still been growing quite well.

Zoom spent all day yelling, must be coming back on heat.  She'll do this every three weeks until she gets in calf. 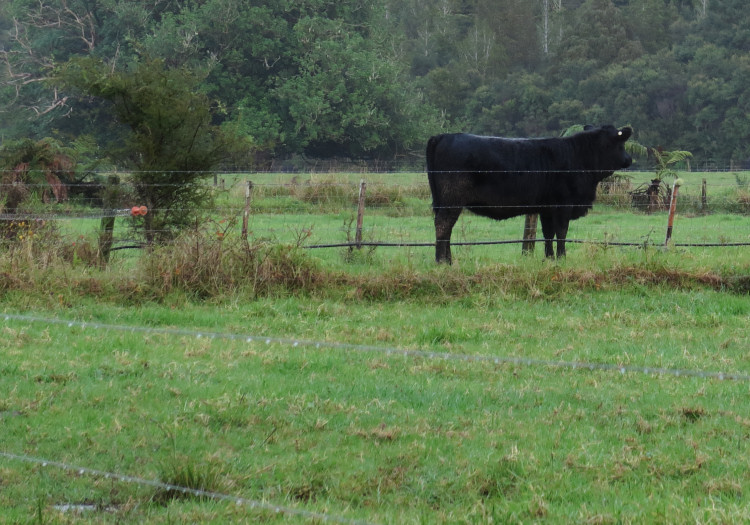 Poor Zoom, didn't know which way to go.  I didn't notice until after I'd taken the photo that she was on the wrong side of the electric spring gate but she hadn't gone any further toward the bulls, probably because her mother was back down at the milking parlour. 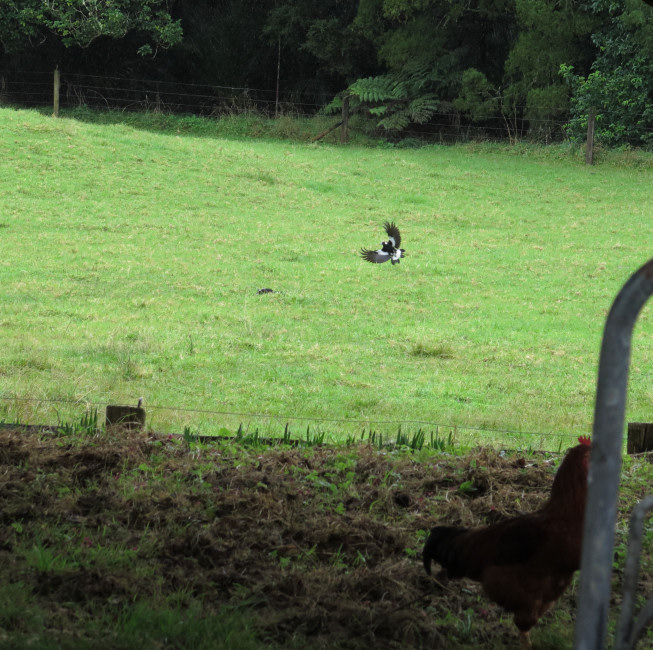 While Cathie and Andrew were still here on Monday, I attempted, several times, to shoot any of the three magpies that kept returning to the House paddock.  Finally today I got one.  I grabbed the camera instead of keeping the rifle sights on the dead bird, so I only managed to shoot its mate, when it came in to see why the dead one wasn't moving, with the camera.  Great shot! 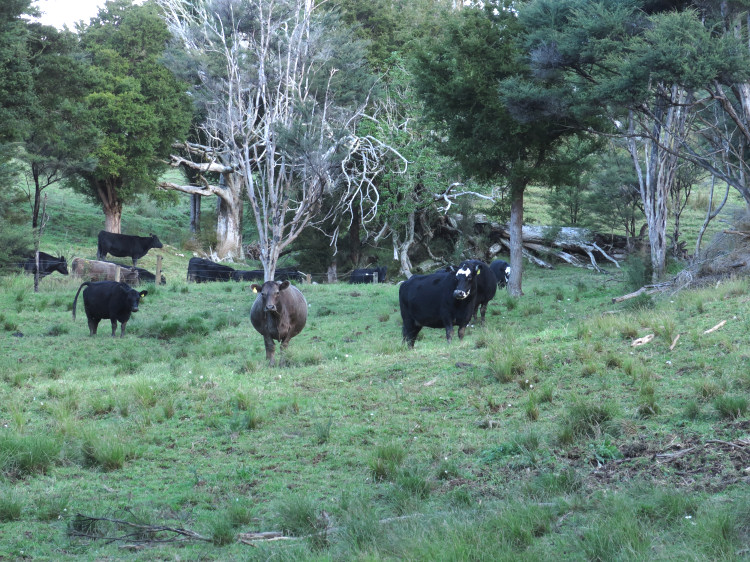 I peeped into the Middle Back this afternoon and the cows appeared to be all happily grazing, so I quietly walked away again.  Somebody saw me and started calling and then they all demanded to be moved, so I came back.

In the picture lots of them are coming down off the upper slope and across one of the two new culverts crossing the now-fenced central gully.