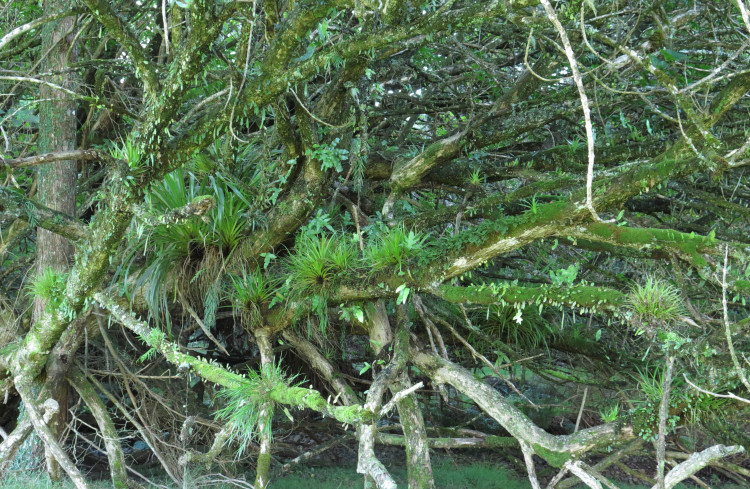 We had 20mm of rain last night, to freshen things up.

These epiphytic plants, growing in the low-to-the-ground canopy of a Pūriri, seem to have survived the drought better than those in many other places.

The stream runs just beyond the tree and it's in a relatively shady area due to other trees. The track here was formerly one of the boggiest places on the farm, taking weeks longer to dry out than everywhere else; it must be a situation of higher humidity than elsewhere. 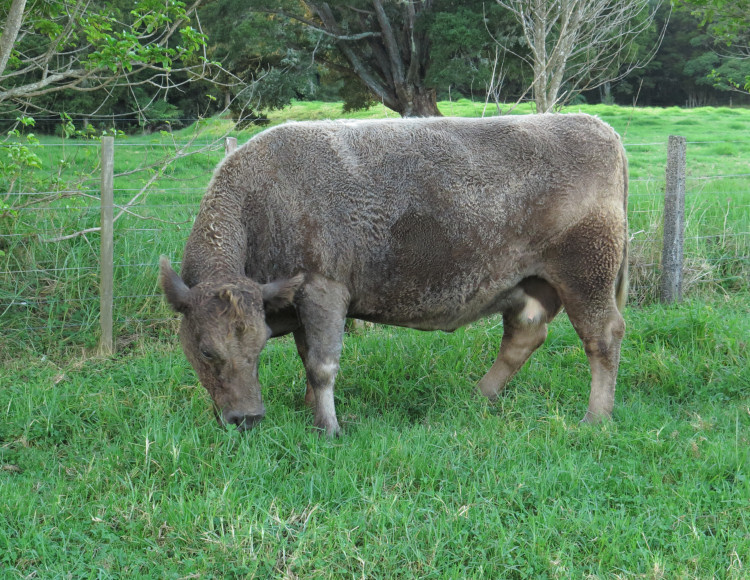 She has calved every year since she was a two-year-old, when she had an enormous calf. When she was not in calf last year, I decided she could have a year off (as opposed to the usual commercial farming practice of sending non-pregnant cows off to the works), and it has obviously done her a lot of good.

I have decided now against calving the two-year-old heifers: it's unnecessarily hard on them and they often end up with an empty year somewhere along the line, or a shortened productive life if they run out of resources along the way.

Our farm, while very pleasant, is not the easiest place in the world for a cow, there being times of hardship and, sometimes, restricted feed. The more mature a cow is when she calves, the more easily she copes with the process, the recovery and rearing her calf, as well as any challenges along the way. 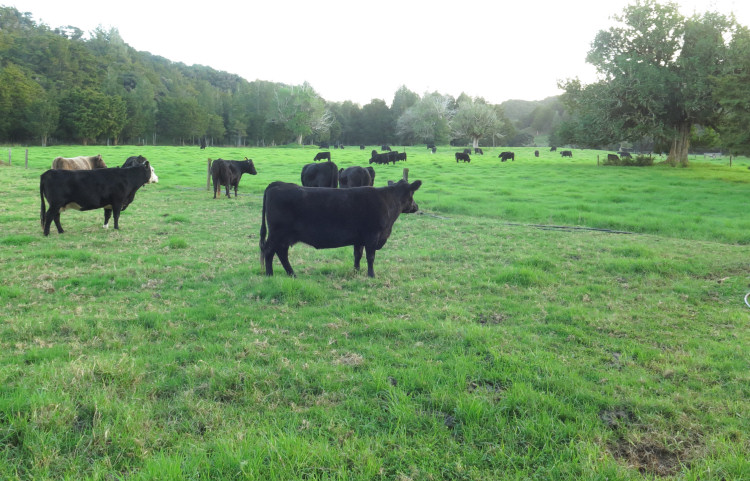 Furthest away in Mushroom 2 are the still-unweaned cows and calves and the young stock; in the middle in Mushroom 1, the weaned sale calves; in the foreground in Flat 5d, the earliest-weaned cows, now able to say hello again to their calves... most of whom are not the least bit interested. 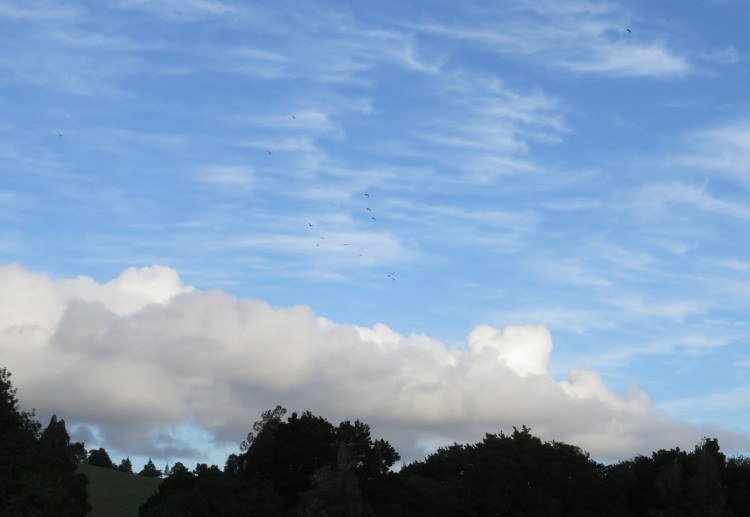 Thirty Black-backed gulls flew overhead this afternoon. They are becoming more and more common here, no longer staying at the coast. 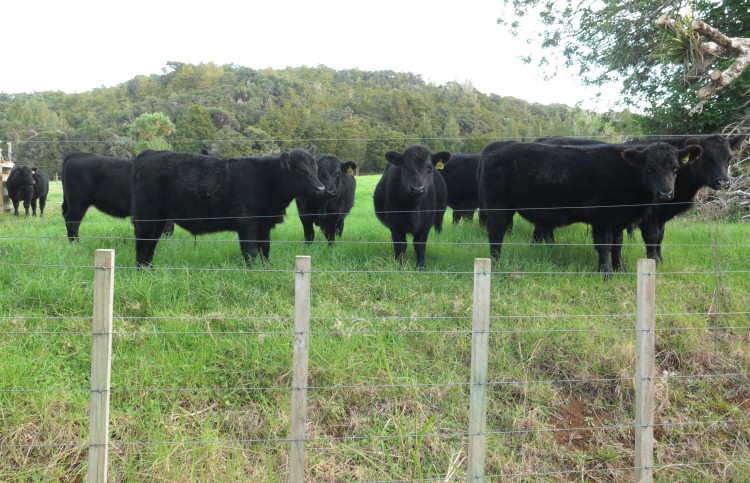 I took the cows from 5d out the back, so several calves came over to the lane-side fenceline to watch them go past. 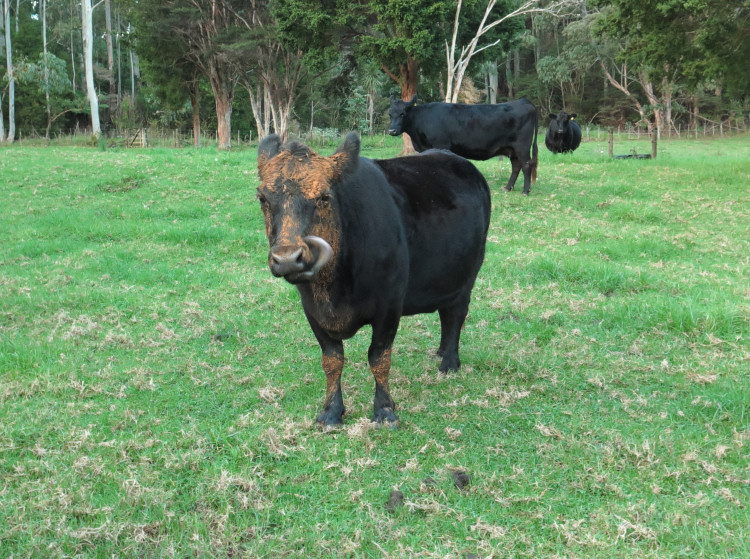 710 obviously enjoyed the bare bank of freshly dampened clay beside the track, on her way out to the Back Barn paddock.

Cows' tongues look ridiculously long when they flick them out to lick their own faces. 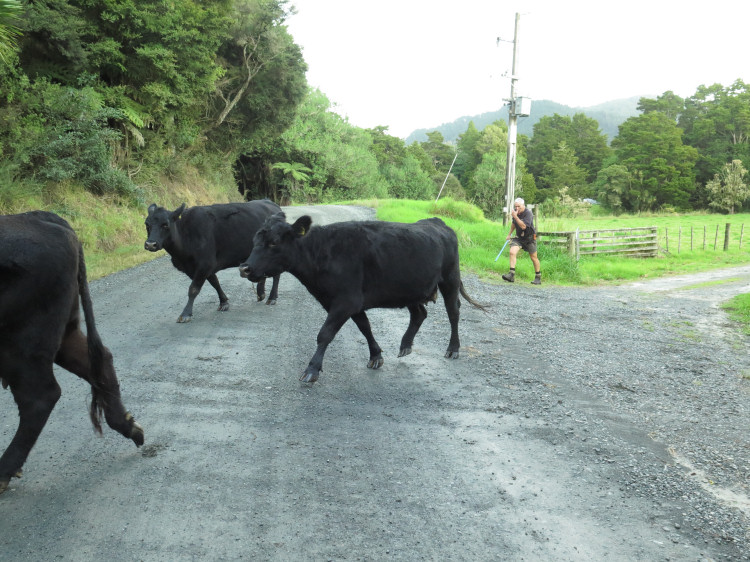 We took the weaned younger cows across the road this morning.

The hill Over the Road has always been really strong country, in terms of how well the cattle do there. I'm hoping to restore these thin young cows to good health by giving them a large area of good feed.

They are my 2016-2018-born cows and when I wean the youngest mothers of the calves I'm keeping, they will join this mob.

Taking cattle across the road is always a bit nerve-racking but usually we get across without any traffic interruptions. There have been occasional frightening experiences with idiotically fast drivers, including once one in a very large truck. 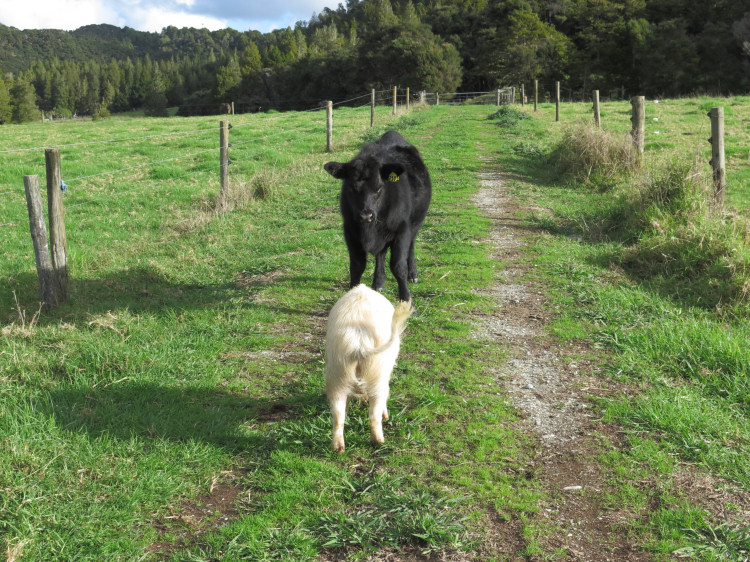 I walked out to shut some gates, taking my fast-growing young companion, Al, with me.

I wasn't quite sure what would happen here and stood back a little to watch.

Al is a very nervous creature, but the cows and calves seem usually unconcerned by the feral pigs; Al being white and with me, is novel. 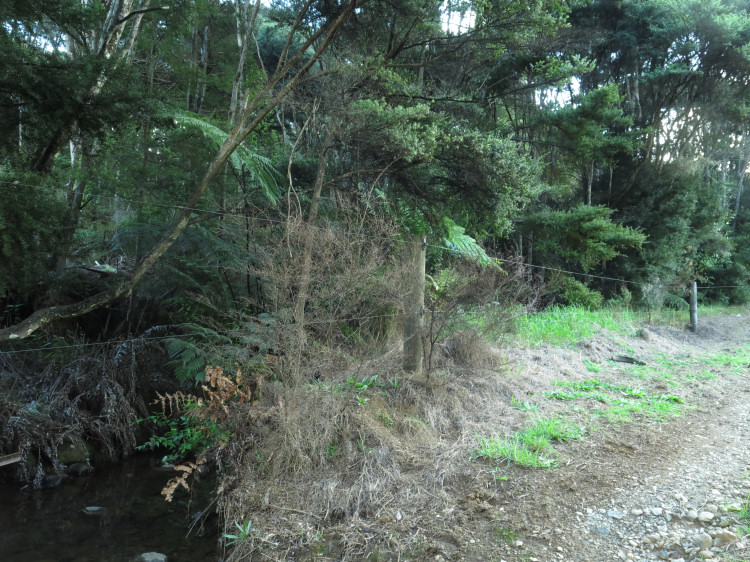 Somebody, or something, has caused the pig skull to disappear from the top of this post beside the stream, near the crossing out the back to the north side of the farm.

I hope it's just been blown off in a strong gust, rather than that trespassing pig hunters think it's ok to change things when they're here without our knowledge or permission.

If the skull fell into the stream, it is possible it will have washed further down when the water came up a bit in recent rains. 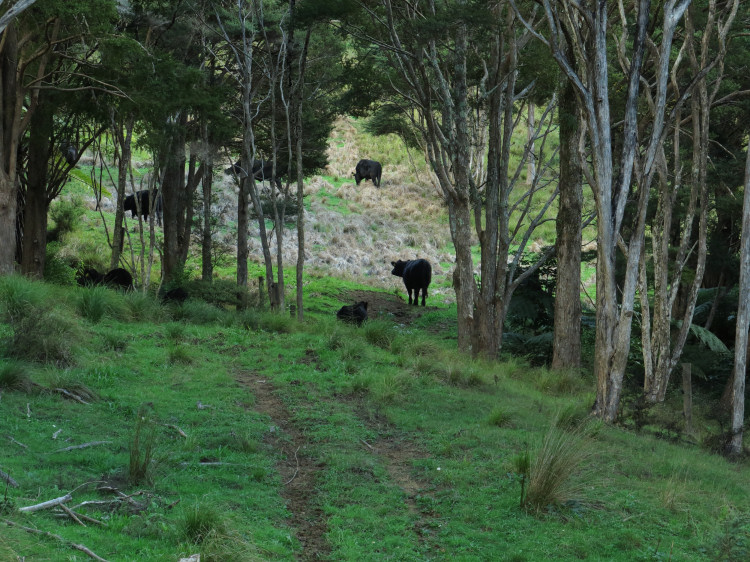 The cows, calves and young stock went happily into the Middle Back this afternoon.

Stephan's sedge-killing appears to have been remarkably successful. Between the plants the grass looks greener than it would have been in the shade of the live and vigorously-growing sedge.

I had worried that spraying the sedge plants would lead to too much grass damage but it seems the balance may be on the side of the grass in getting rid of the sedge by the most efficient means. 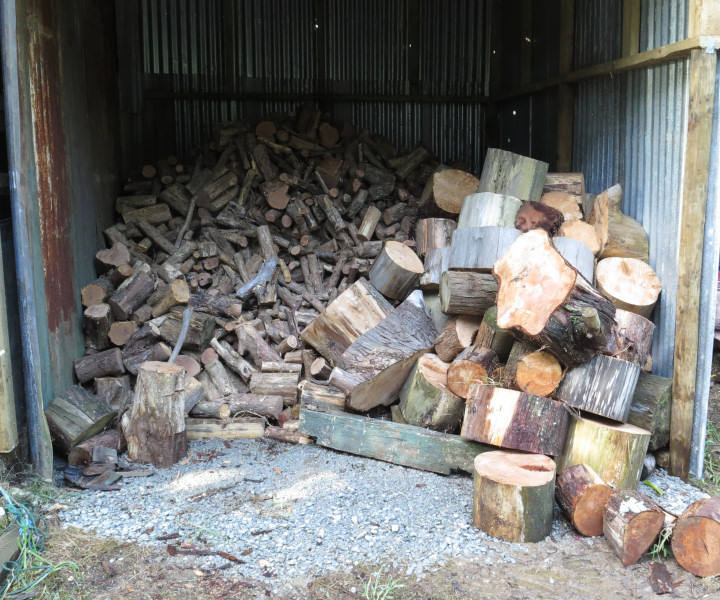 What an excellent implied challenge: burn all this!

The big logs are mostly Tōtara from the road corner alteration a few years ago, which were left in the Road Flat paddock when the council contractors put all the fill from the corner re-shaping there.

The rest is well-dried Kānuka cut during clearing work in preparation for fencing to protect gully waterways around the farm.

Happily there'll be enough wood to share. Being warm is such a luxury - it ought to be a given, but we know that's not so.

When I went to feed Al today he made the usual squeals and grunts as soon as he heard me pick up the milk bucket. As I approached his pen, talking to him all the while, singing wee-wee-wee back to him, I realised why "the fifth little pig went 'wee wee wee', all the way home": it's because that's the noise little pigs make! It's only taken me a bit over 50 years to work that one out.

723's son has a beautiful coat. His hair grows in all directions so it looks all curly.

723 is not pregnant this year and I'm contemplating her fate. She's a nice little cow, had a bit of a tough start, as Endberly did, and I wonder how much a year's rest might benefit her? Her mother and sisters were fat cows but she has always been thin.

She has had seven nice calves, so I think she's worth keeping. 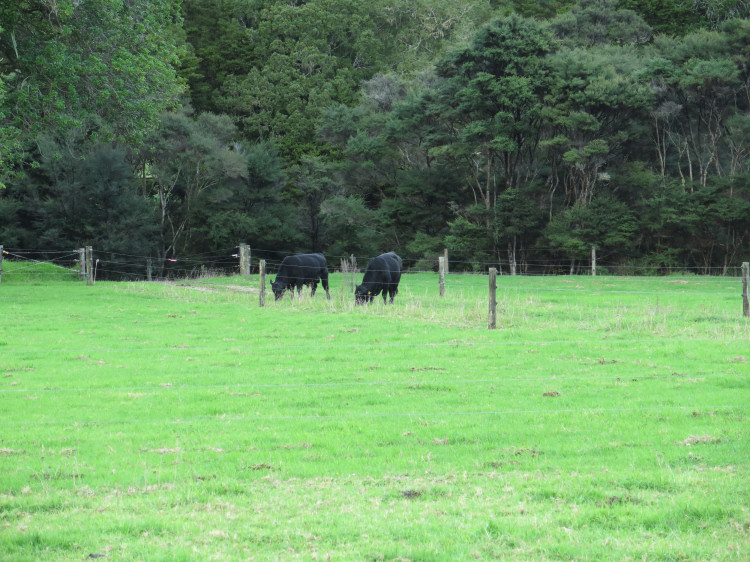 The two cull bulls on their way along the Mushroom lane. I set the gates and left them to come quietly along.

Stephan went to spend the day with sister Elizabeth, it being three years since William died. 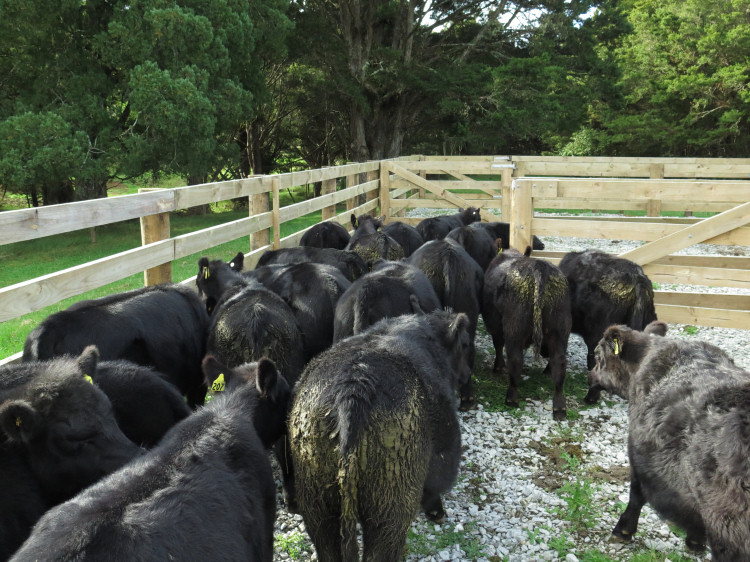 The sale calves will go tomorrow so I brought them in to weigh them one last time for price calculations.

Some of them gained extraordinary amounts in the first days after weaning, when they had a lot of lovely pasture to eat; since then they've evened out again. There are still a lot of dirty rear ends.

Twelve steers and five heifers will go on the truck. 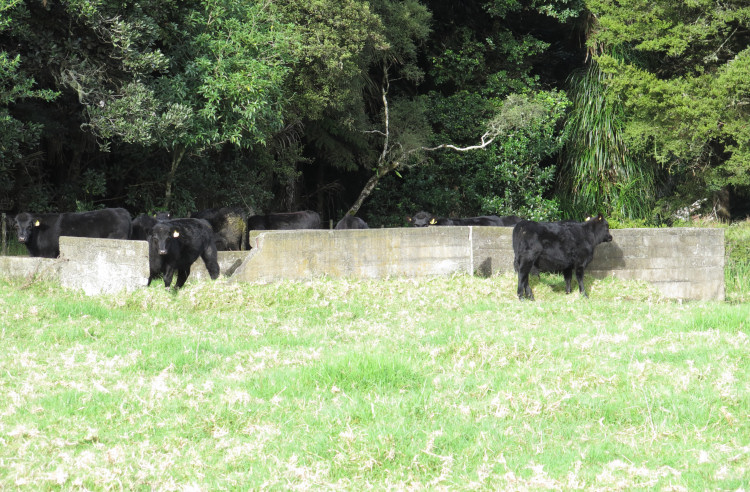 We'd gone for a quick neighbourhood-watch stroll up the road and when we returned, all the calves had gathered together in the old pig sty.

The time had come for them to go into the yards ready for the truck. They moved very nicely together. 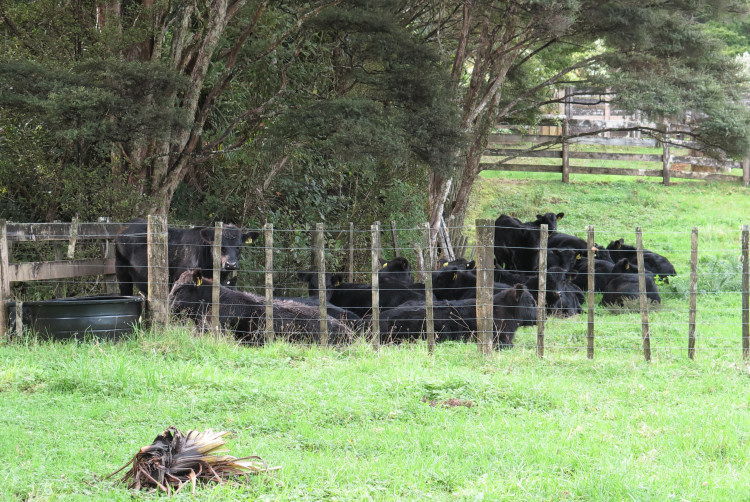 After a coffee we came back to wait for the truck at 11am and they were nearly all sitting down.

I took photos of all their faces, realising I hadn't got around to doing that yet. I hope I got them all. 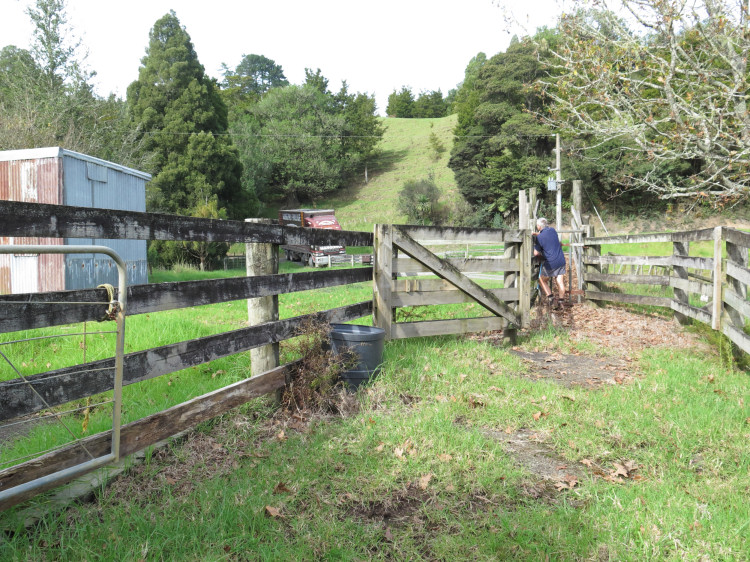 The truck arrived and I went away while Stephan loaded them quietly on.

When he came back for a second coffee, Stephan reported the lovely conversation he'd had with the driver and I thought for a moment I'd like to have been there... except the lovely conversations don't happen with me because like most male farmers, most truck drivers are sexist and don't consider women worth talking with unless they're young and attractive (by those men's standards).

This is a tough place to live for a feminist; even writing about it is trying, because I had to delete so many words from that sentence. 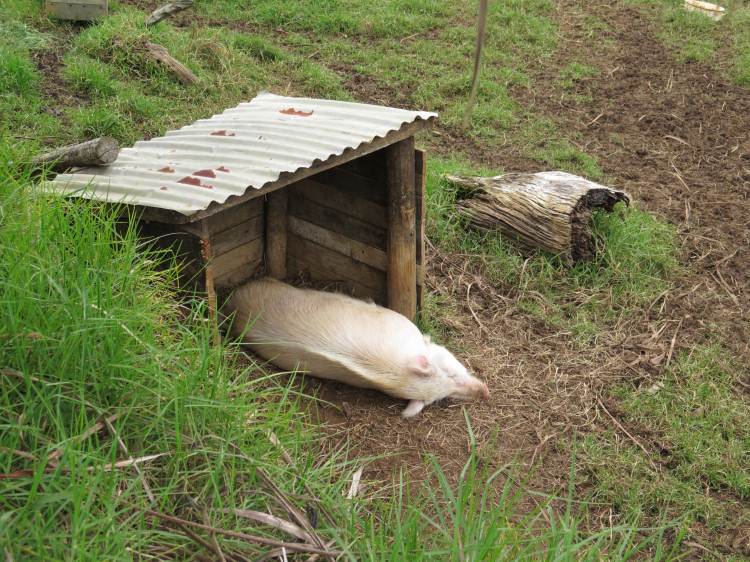 Al having a snooze. 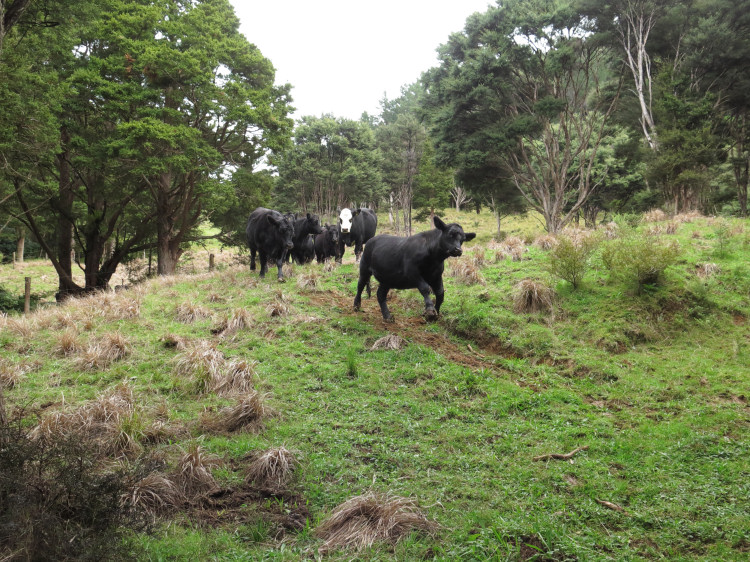 It's always entertaining moving the cattle from the Middle Back to the Spring paddock because the cattle usually stop where they are in the picture, before hooning down the slope and through the gate.