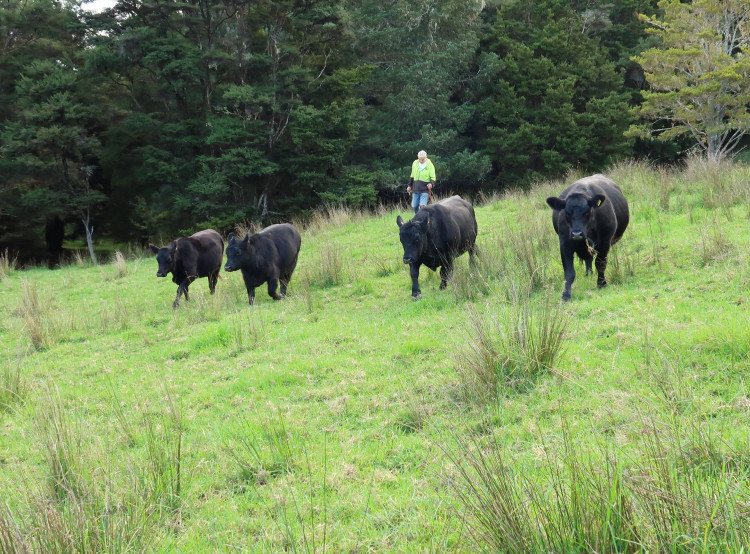 The works cattle are to go tomorrow morning, so we got them in this afternoon. I forgot, when they were in the yards last time, to collect some tail hairs from the bull and it's always good to have that sample sitting in my filing system, just in case something is discovered about his genetic line later on, that I need to test for. Also, since the very heavy rain the other day, the paint marks we put on their backs have faded almost to invisibility, so we'll redo them.

They went through relatively quietly and now I have a bundle of tail hairs, with follicles, in an envelope and the bull barely noticed the operation. 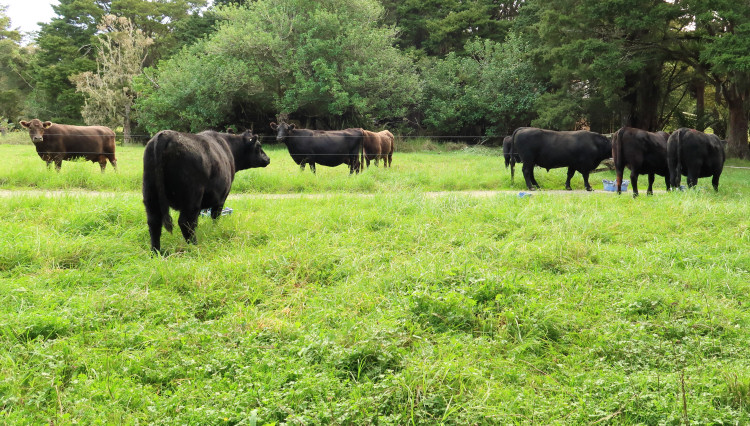 We took them in to spend the late afternoon in the driveway and I brought them some molasses, heavily laced with Magnesium Oxide, to make them feel as calm as possible tomorrow.

Zella and Glia seemed quite put out that there was molasses being had and it wasn't for them! 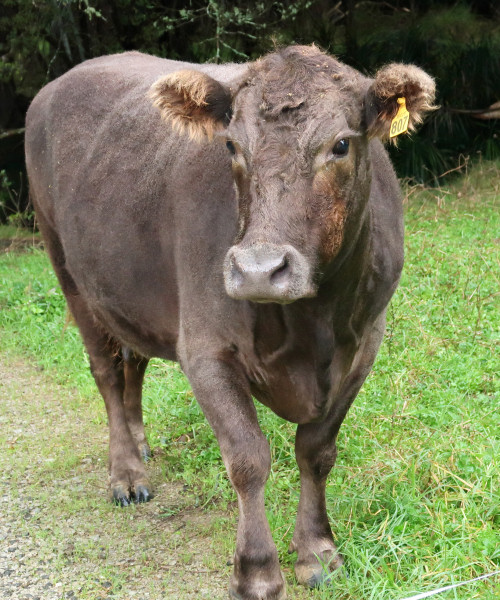 Glia has such fluffy ears. 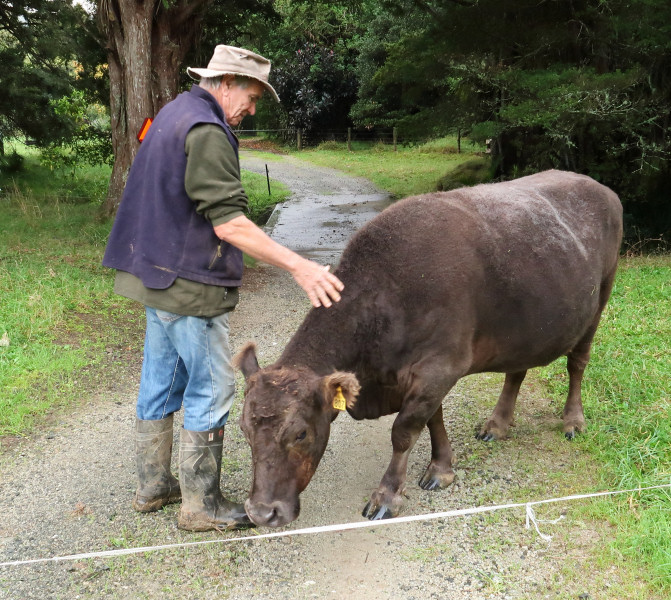 Next to Stephan Glia doesn't look as big as she seems to me; but she weighs about 750kg, which is substantial.

The truck arrived for the works cattle and they went on quietly and easily for Stephan. I like being able to send them in groups who are familiar with each other, so that at least one thing is constant when everything else changes. Who knows whether they're more alarmed, or curious, as they head off into the unknown.

I was pleased that the day was mostly fine and the temperature mild. I don't like to think of them being rained on and then chilled by the cold wind whipping around them as they travel at speed down to Moerewa. Trucks are much more closed in these days, than they used to be, but it must still be uncomfortable in horrid weather. 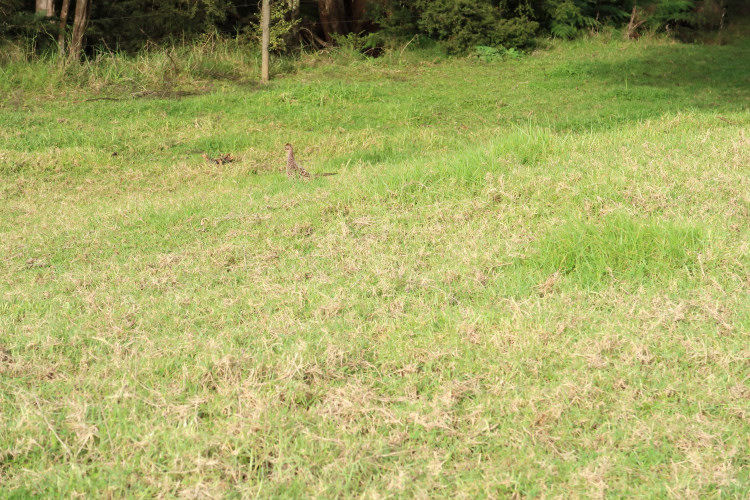 I went to move the cows out of the Bush Flat and a young hen pheasant ran across the paddock and down the slope but not at the usual panicked rate, so I took her picture. 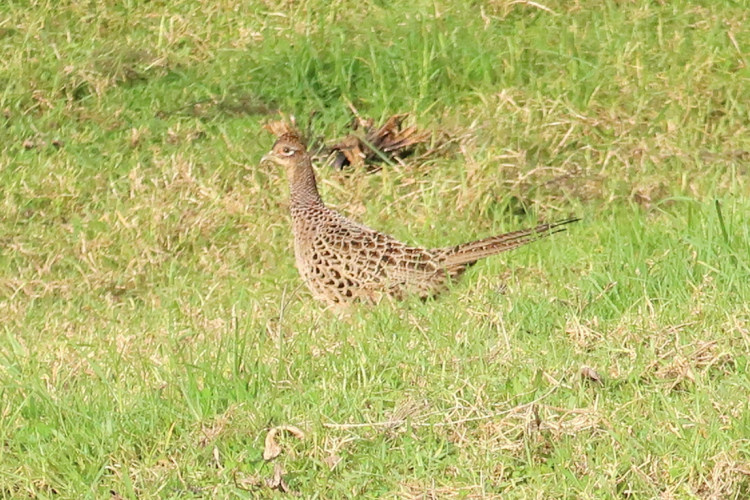 They're pretty birds and there are dozens of them around at present, always flapping up in alarm when we surprise them. I don't know what they're doing when they suddenly become aware of us and launch themselves into the air. They must spend a lot of time dozing or something, or they'd have time to avoid us without so much panic. 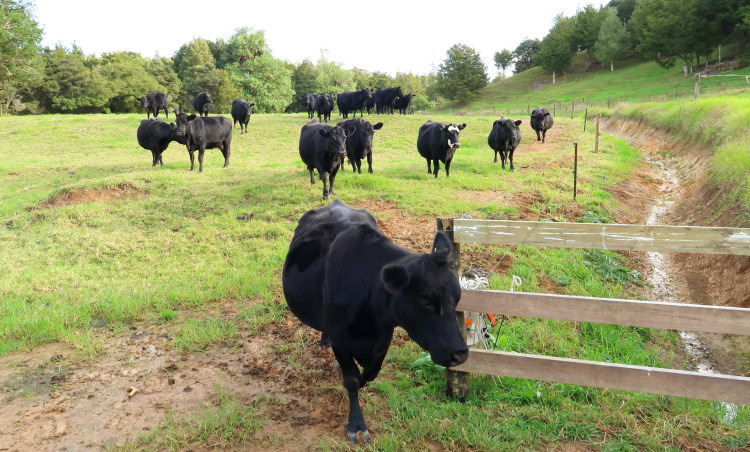 I like the new drain and what I anticipate it will do for the paddock and the track and all.

And I greatly appreciate that Stephan sees, as I do, that a drain isn't finished until it has a fence. 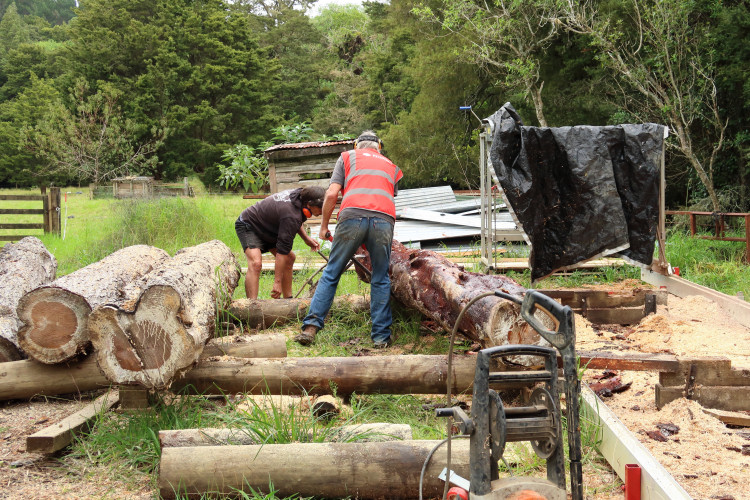 Stephan's younger brother, Edwin, came over from Russell today to participate in some timber milling.

Here they had been water-blasting to clean off the log, then ended up de-barking it because that was just as easy. 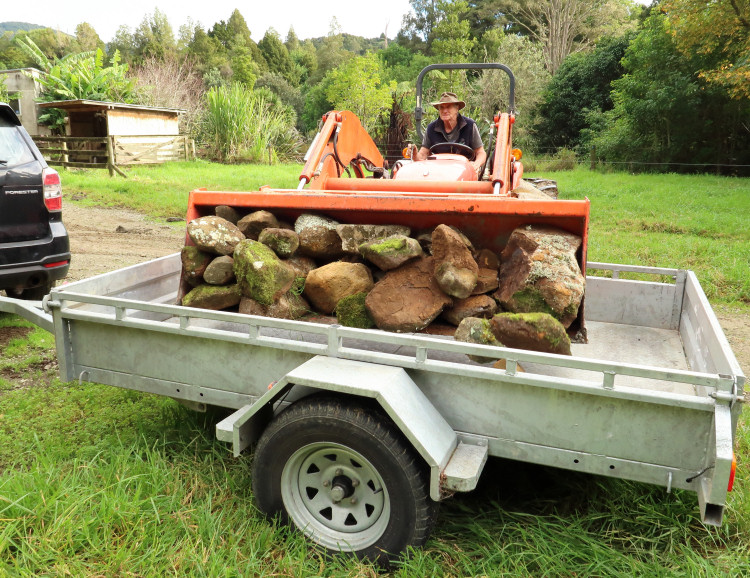 Edwin stayed overnight and this morning he and Stephan went out to find some rocks for Edwin's garden. I'm not entirely sure I approve of this extraction of resources from our environment. I haven't been out to see where the rocks came from yet, see if I notice their absence. 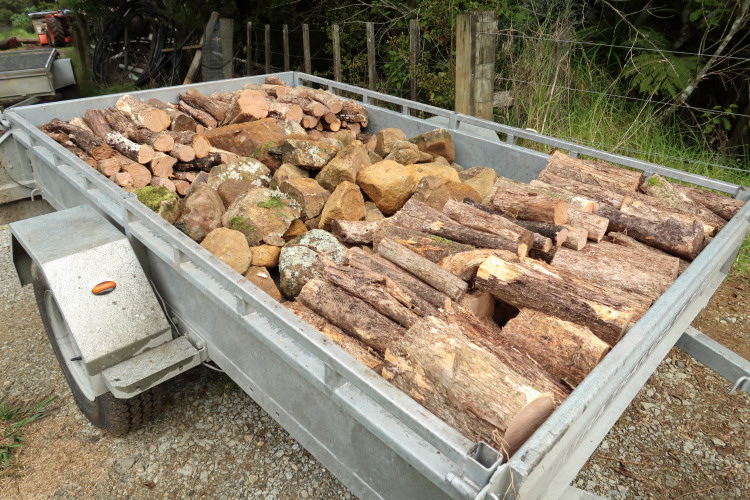 A whole trailer full of goodies. 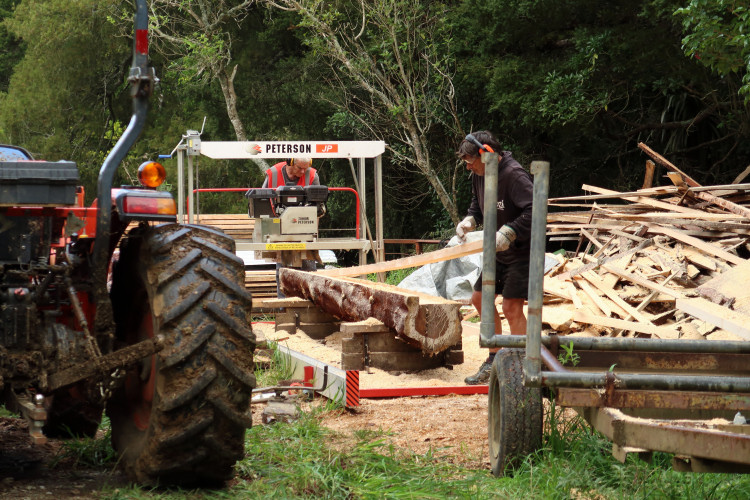 The milling continued and Edwin went home later in the afternoon. 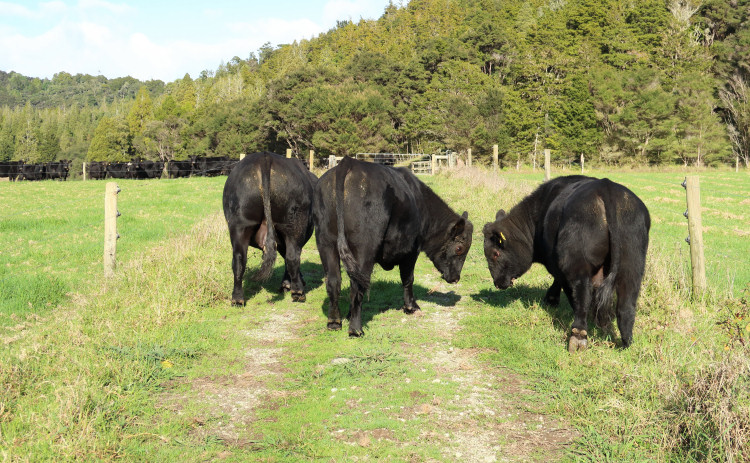 With the cows in Flat 4 acting as a draw up the lane, I moved the three bulls from Flat 2 to 5b. Then the cows came down to Flat 2 to chew the paddock down further. They don't need as much feed as the young bulls.

The bulls, without shouty, rough, argumentative 189, are much quieter, a pleasure to deal with. These two knocked heads together but they weren't serious about any kind of disagreement. 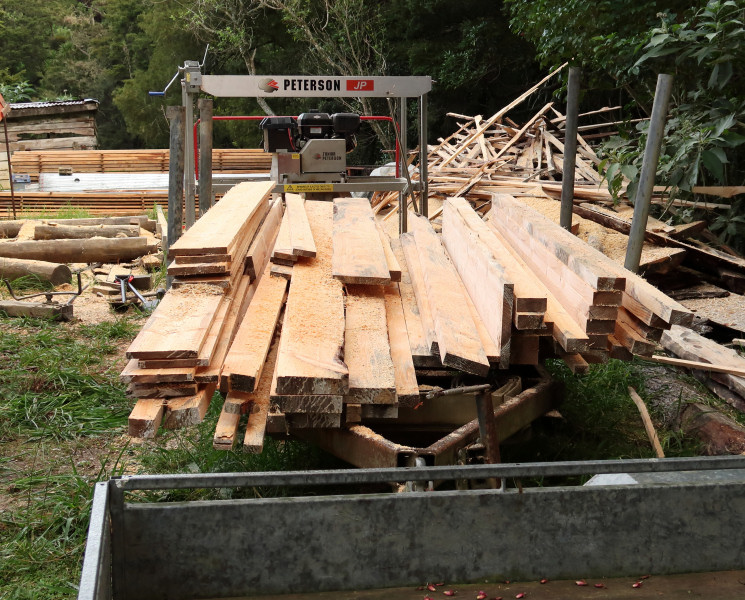 Look at all that timber! Of course you wouldn't build a whole house with it these days, without treating it for rot and insect attack but it'll be tremendously useful around the farm, for all sorts of things. 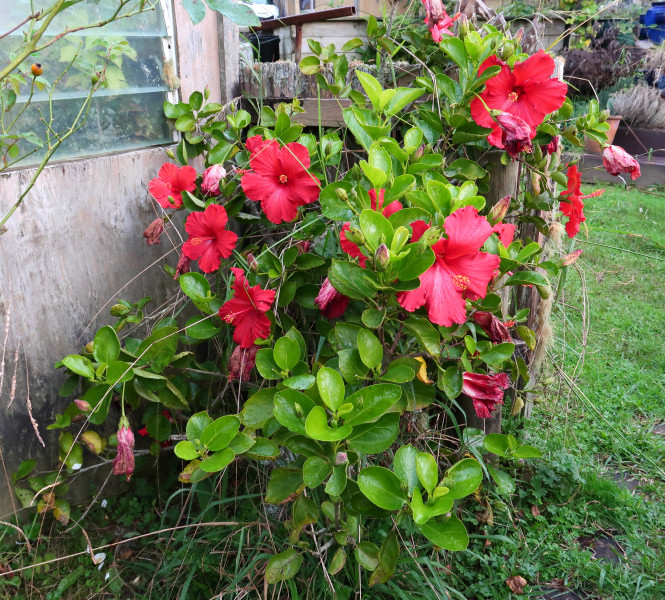 My Hibiscus plants are blooming magnificently.

I took Stephan to town for his Birthday treat, a visit to a doctor, who took to him with a scalpel and then gave him four stitches. What more could a man who has reached his Biblically allotted span of three score and ten really want? 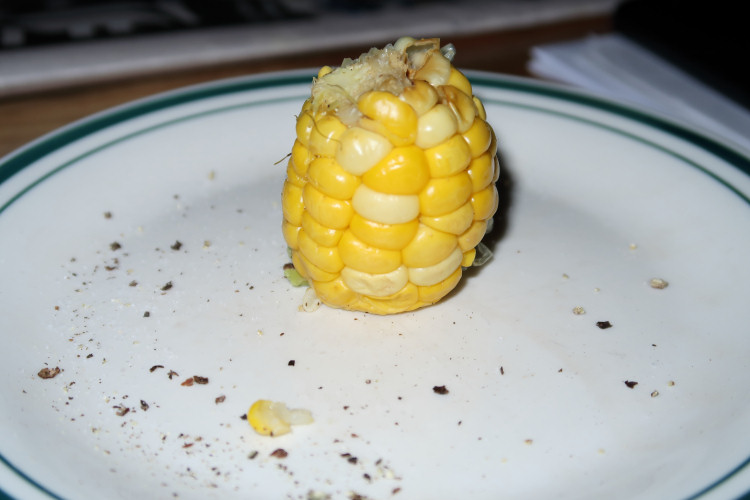 Stephan planted some very late sweetcorn and it managed to flower and set one short cob. It was delicious and we had half each.

It wasn't really all we had for dinner.

After dinner we sat with the laptop computer and enjoyed a 40-minute Zoom meeting with some of the family and friends. Stella and Clare were walking along Cuba Street in Wellington, so we felt like we were going to their party!

Then we had a 15-minute break and started again with a smaller group. It was all a lot of fun, a nice way to see lots of the people we would like to get together with but are not seeing much of at present.

Stephan spent the morning with neighbour Aaron, pulling the diff off the red ute, to work out what would be necessary to fix it. Then we went to town, spent a couple of hours visiting Barbara and Jim, still considered safe since their Covid recovery. 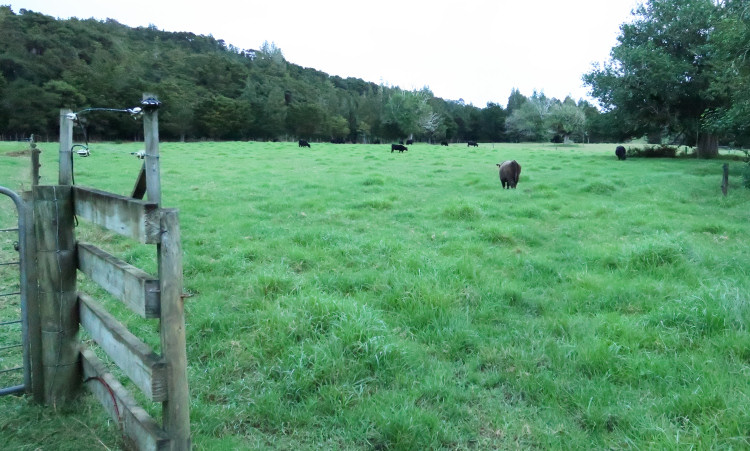 At five o'clock, after waiting for some rain to stop falling, I went and moved grey 812 and 183 and their two calves out of 5d, leaving recovered (previously lame) 773 there.

The other cows and calves happily went into the long grass in Mushroom 1.

I need to get 813 ready to go away with the other cull cows (she's just too troublesome at calving and is not in calf this year for some reason).

The little bull has to come away from the heifers, before there are any unfortunate accidents of conception. He shouldn't be fertile for another two or three months but it's best not to leave it any longer. So in a few days, when he's weaned, I will take him away from the heifers and put him with the bulls. 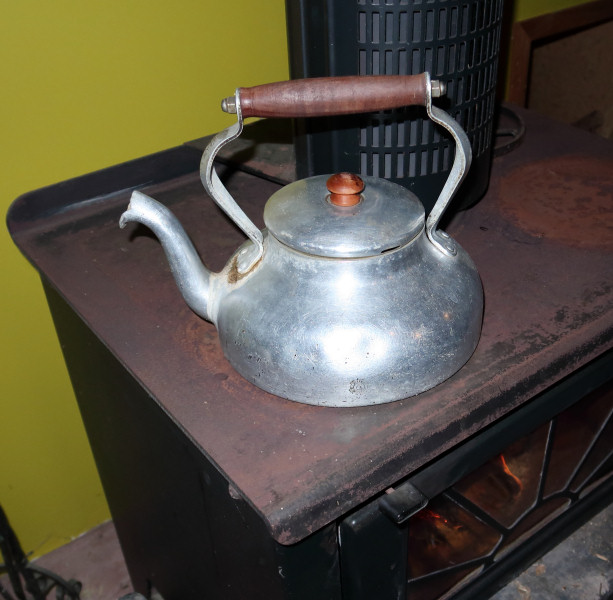 Stephan did a repair job on the old AGA kettle, its Bakelite bits having crumbled away. The handle has been loose for years but the other night the lid's knob fell to pieces, necessitating a repair, so he turned both wooden replacements.

The handle is Rātā and the lid knob is something unidentified and should probably be replaced again to match the handle, but that might not happen since this will work.

The kettle is likely older than Stephan, probably of 1940s vintage. It originally sat on the AGA stove in the Mathew family home in Brecon, Wales. In Aotearoa it was, as far as Stephan remembers, used on camping trips over open fires (which may have precipitated the breakdown of the Bakelite) and in Diggers Valley had been first used on a Shacklock wood-stove in the old house. After the house fire the wood-stove was removed and the kettle stashed in one of the sheds, until he retrieved it when we first lived in the shed across the flats and cooked on a second Shacklock wood-burning stove.

It being such an efficient water-heating kettle, we've continued to use it whenever we have the fireplace operating here, with hot water ready for drinks or anything else.

In the evening we hosted another two Zoom meetings for anyone who hadn't been able to join us last evening. Stephan hadn't been quite sure about the idea when I suggested it but really enjoyed seeing everyone. It's always a bit tricky from here, with a delay at our end due to the satellite broadband connection but it works well enough when you get used to that.