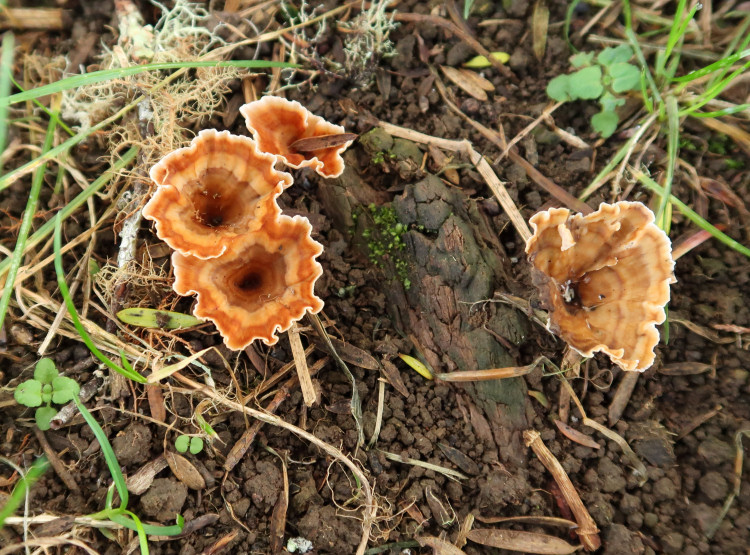 There are fungi everywhere after the rain. I thought these little bracket fungi, growing on some dead roots, particularly beautiful. 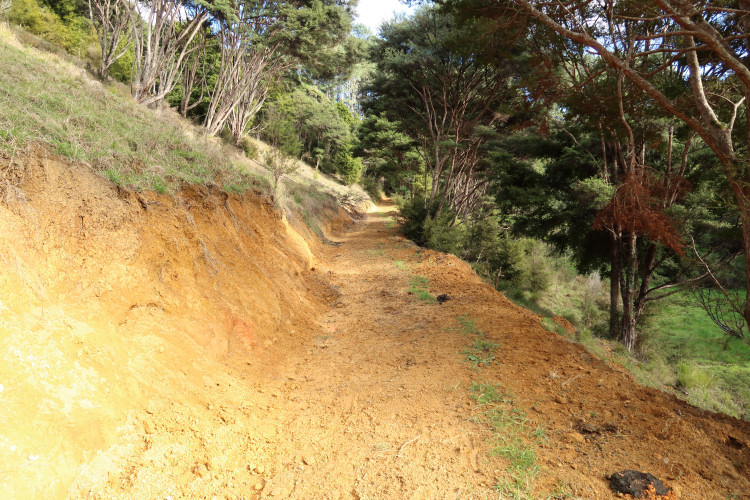 Here is the Pines track Stephan recently renovated, as I walked up the hill to the top, for the sake of it. 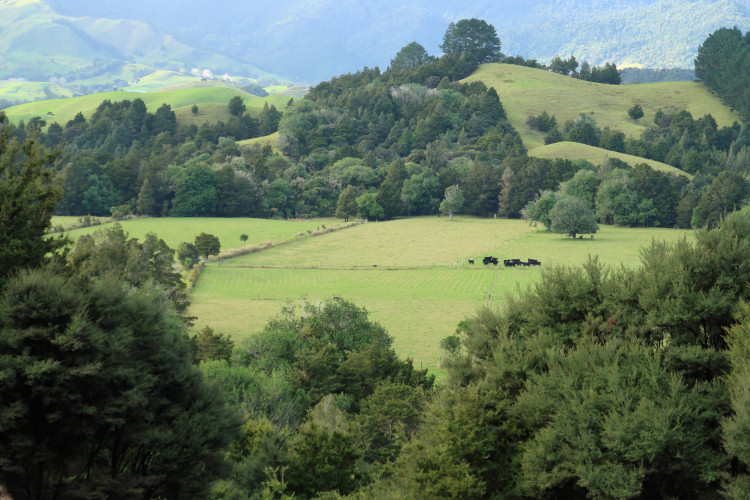 Two thirds of the way up, looking back from the ridge between one side of the Pines paddock and the top of the Small Hill.

When I saw the gate in this odd configuration at the very top of the hill, it took me a moment to remember that this is how I'd left it months ago, when the two big bulls ended up (by my lack of attention and poor planning) on either side of the wooden gate and I'd wanted to keep them from pushing against it.

I'd had some fence standards with me and some hay string, so used the gate from the Pines as a barrier on the PW side. And so it has remained. Anyone could have stepped over it but they're not keen on the electric tapes. 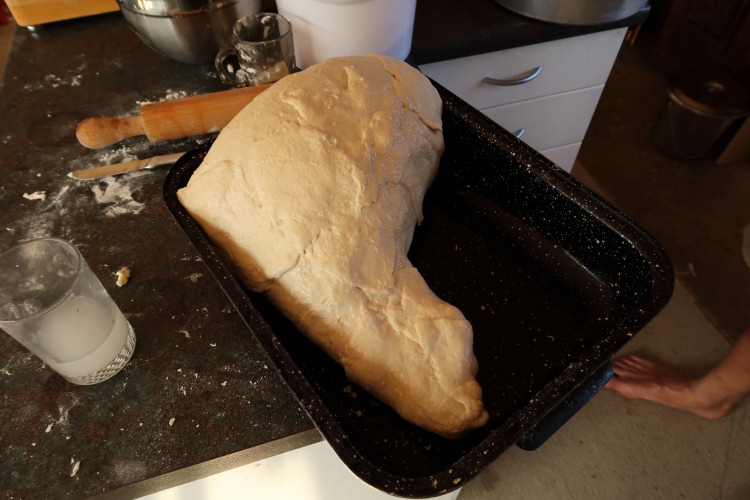 I returned home to find Stephan putting a flour-and-water coat on a ham, before beginning to cook it for tonight's dinner. This one cracked during cooking, but we still prefer not having to use a plastic oven bag. The hens eat the pastry afterwards.

Lynn and Kees arrived in the evening and Stephan served the deliciously-glazed ham and vegetables, followed by a feijoa crumble for dessert.

This was his birthday party dinner, with two people we like a great deal and know to be as Covid-careful as we feel the need to be. It was lovely having them here, relaxing together in the same space with good food and drink, in front of a lovely warm fire.

From afar I'd seen a couple of the cows on heat over the last two days, out across the flats. Through binoculars I was fairly sure I knew who they were.

This afternoon, before moving them, I went around each one, checking for signs of fertile mucous and confirmed both. One was 811, mother of nearly-died 921, who's going to the works soon anyway and the other was young Fancy 191, who I already knew wasn't in calf. A year's rest will do her good, since she was one of the last group of heifers I calved at two years old.

Here they were going out to the Frog paddock, past the other cows who still have their calves with them.

Our GST return, goods and services tax, was due today, so I made sure I got that sorted out.

Stephan fixed the digger enough to drive it back from the Middle Back, so when he gets the correct little part, he can easily put it on and have it reliably working again. It seems to need a bit of fixing but nothing has cost ridiculous sums yet and it's such a useful machine for the money he paid for it.

I woke at a ridiculously early hour and as soon as it was light, walked out to the Back Barn, where Stephan had put the cows for me yesterday. I'd woken with the terrible realisation that I'd left their trough's valve jammed shut so it wouldn't unnecessarily fill from the tank water, last time the main system was off.

When the weather is cool and wet, the cows don't actually drink a great deal from the troughs and when I got there I found it full, over-filled from the last rain. I think the valve had been leaking with the increased pressure of the water once the system was restored to normal, too. I removed the stick I'd used to hold the ballcock up.

Then I walked out the other side to open the Big Back North for the cows, calves and the two pregnant heifers.

I had walked, rather than taking the buggy, because I hadn't wanted to wake Stephan when I left, for exercise and because petrol costs a bomb! 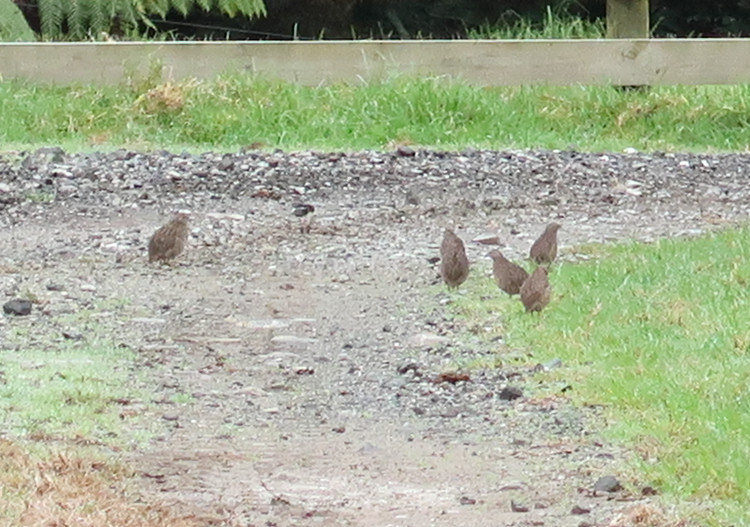 As I came back along the track at the top of Flat 1 early this morning, I saw the group of little brown quail. They're the loveliest little birds, though very shy. I always try not to frighten them, hoping they might become less flighty.

Then, instead of going in for breakfast, I kept walking, out to the front, across the road and up the hill, to check on the heifers.

We are both so very glad that we were cautious enough to double-fence the whole of our boundary down this hillside. The woman on the other side said she would be planting trees, have no animals and we'd thought of not bothering. But it occurred to us that she might not be there for long, so we should do what we needed to for our herd's safety; and then since then there have been all sorts of cattle on the other side of the fence, from at least four different herds so far.

In the evening there was exceptionally heavy rain, so I felt the need to keep checking outside for the sound of rising flood waters. At 10pm I went for a walk to the bridge to see how high the water was there, then checked Jane's culvert bridge too, because the water coming down from the back of the farm sounded so high. As a shone my torch down to the water, a swallow flew out from under the culvert and, being confused by the light, came and landed for a moment on my umbrella. Poor bird. I never know, in the dark, whether I'm helping or hindering them by attempting to light their way to another safe perch. I saw it crash land in one of the trees by the stream.

I presume that despite it being autumn, nearly winter, they're nesting under the culvert. Their normal breeding season is August - February, according to NZBirdsOnline.

In the rain gauge this morning, 50mm; most of that fell in about half an hour last night. If there'd been a lot of rain before that and the streams were already running fast, that much, falling that quickly, would have caused a flood. It seems much harder to predict anything now. 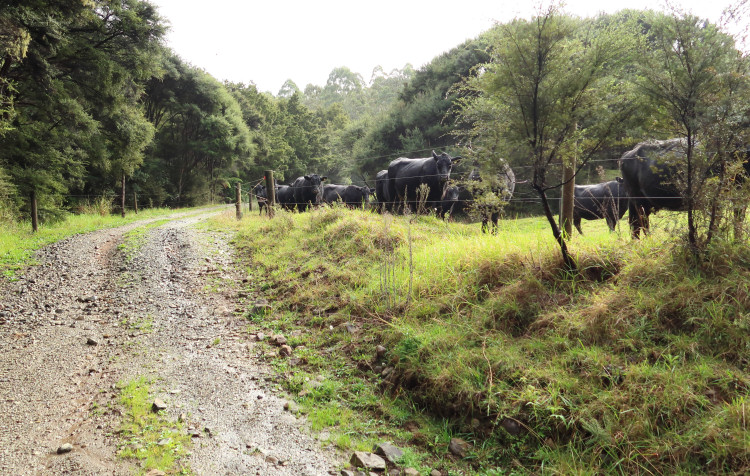 The cows were ready for a move this morning. The streams stayed high yesterday, so I didn't come out, knowing they had enough to eat. 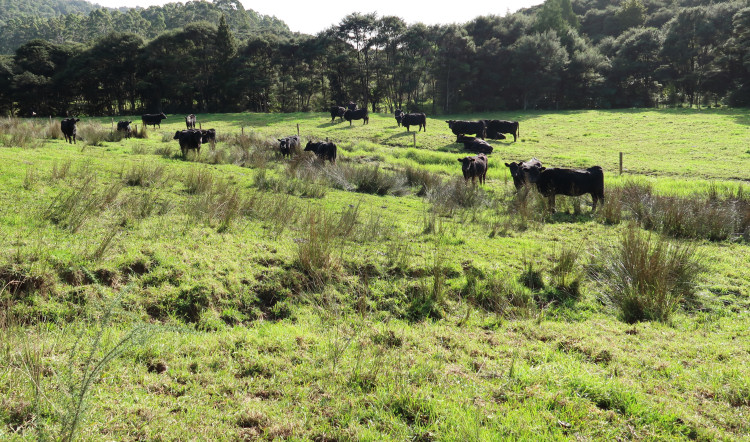 The cows, waiting for a shift again. I put them over the stream into the Swamp East Left. 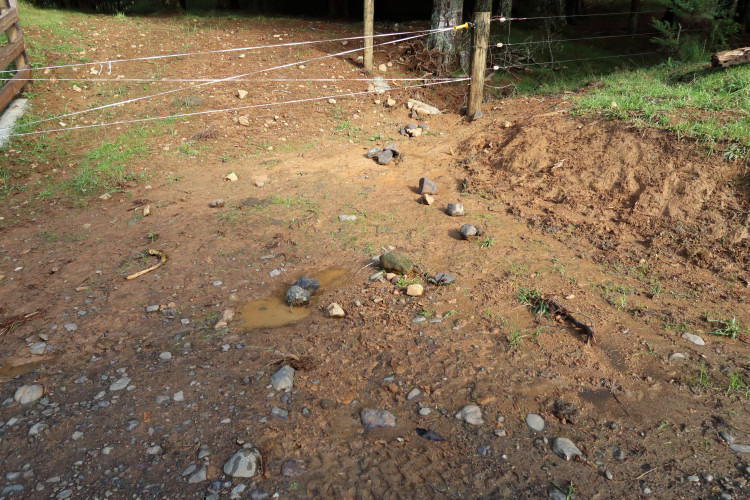 All these rocks on the track confused me when I went out past them but by the time I came back I had realised why they were here: the Pines drain water must have been too much for the new culvert and had overflowed out onto the track, bringing the rocks Stephan had left over from his culvert concreting job. 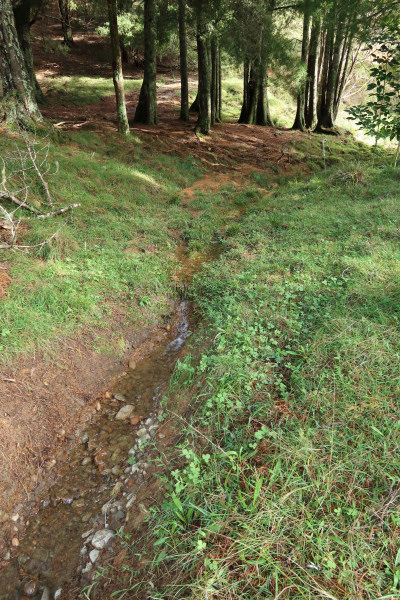 It's not particularly obvious that so much water came along here but I think that's what must have happened.

The Pines slopes surrounding its wet area are quite steep, so on Tuesday night there would have been a lot of water all of a sudden coming down to this drain at the bottom.

The leaves at the top right of the photo are those of the Pūriri saplings we currently protect with electric tape, now getting reasonably tall.