The week beginning the 9th of July 2022.
Saturday the 9th

It's the 9th of July. I sometimes think it's odd that we keep commemorating the death dates of people (my father's today, 33 years) when it was always their lives that were more important. Is it just our way of saying to the dead, we will not forget you? For whom do we say that?

In the course of my genealogical exploration I have found so many people we have forgotten, people nobody told us about so we didn't know, people whose preference was not to purchase grave markers, so nobody remembered where they were buried. Does it matter?

When two of our girls' parents died (one a mother, one a father) when they were eight and 12 respectively, I noticed that their instinctive way of "remembering" was to keep their sadness current, in a way that was detrimental to their lives and development. They somehow seemed to feel obliged to feel sadness, as though any other feeling would cast doubt on the depth of their love for the deceased parent. I bet we've all said to a young person, something like "she wouldn't want you to feel sad." It's true.

It all gets easier with age, I'm learning.

Today I was on the trail of a great great uncle who had about six families, sometimes concurrently and one of his sons was similarly prolific. A large number of my DNA matches belong to those families and I had some fun working out who most of them were and are. 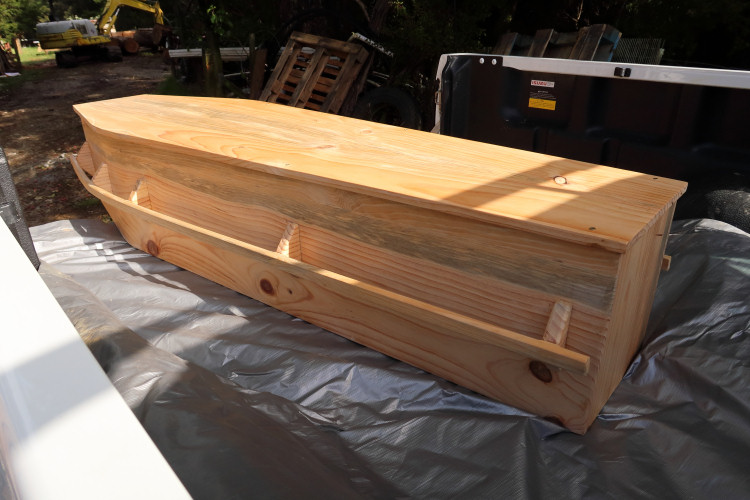 Stephan has been building this coffin for our friend Alan and today was asked to take it round to his place at Takahue in time for a party. Alan isn't in immediate need of such a container but wanted to be prepared, being of an age to expect to need it at some time in the foreseeable future.

The party was an open-air event, with some people choosing to be under cover, in the shed with the pool table and the coffin beneath it but Stephan said he stayed entirely outside, as is our current practice.

The nicest thing for Stephan was that usually when a coffin is delivered to someone, it is not the centre of attention, as it was today, attracting admiration and complements from all present. Alan was reportedly very pleased to have it in his possession. 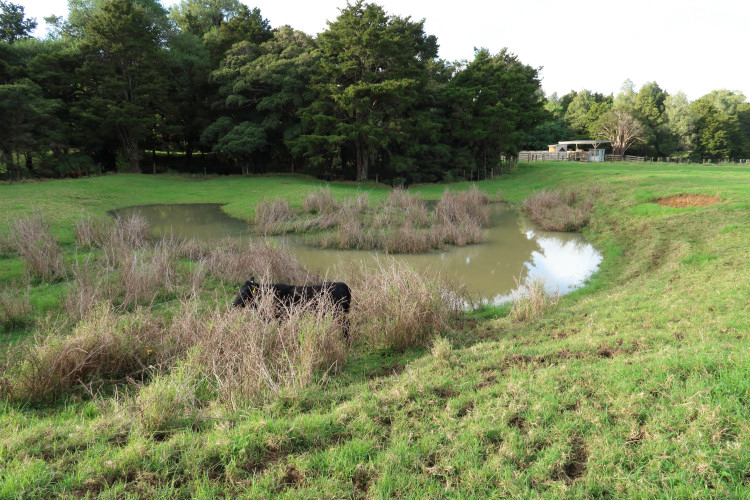 This big puddle is in the Windmill, where the blackberries grow. The stream must once have flowed around this curve. I wonder what got in the way of it continuing this way, causing it to cut through where it does now? If I could time travel, I would go back to answer such questions. Among other things. 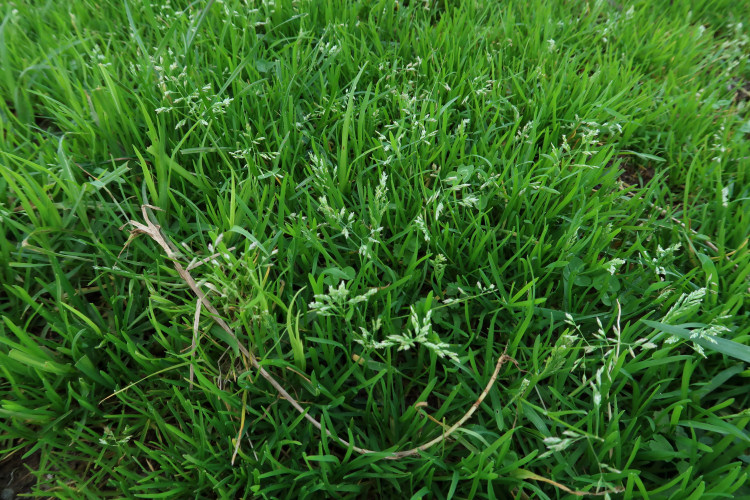 Another grass; but this one is not flowering out of season. It's Poa annua, often called winter grass because it is active now. 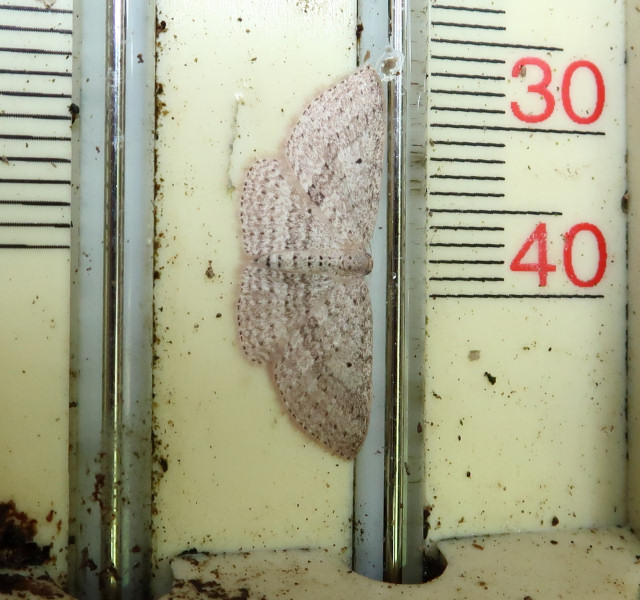 I don't know the name of this moth but often see them around the place. Such understated beauty. 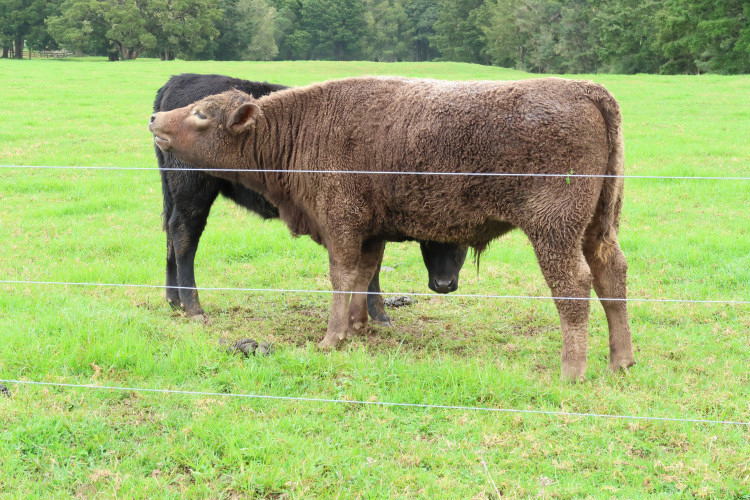 Glia's calf is still calling for his mother. 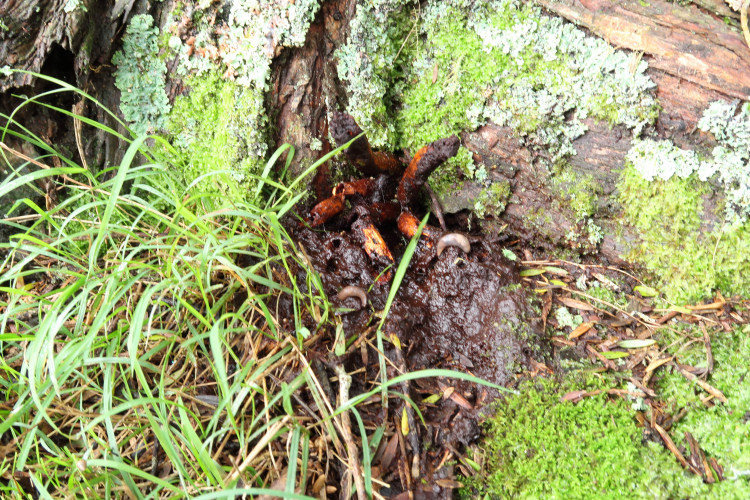 This is all that remains of the fungi I photographed two weeks ago. 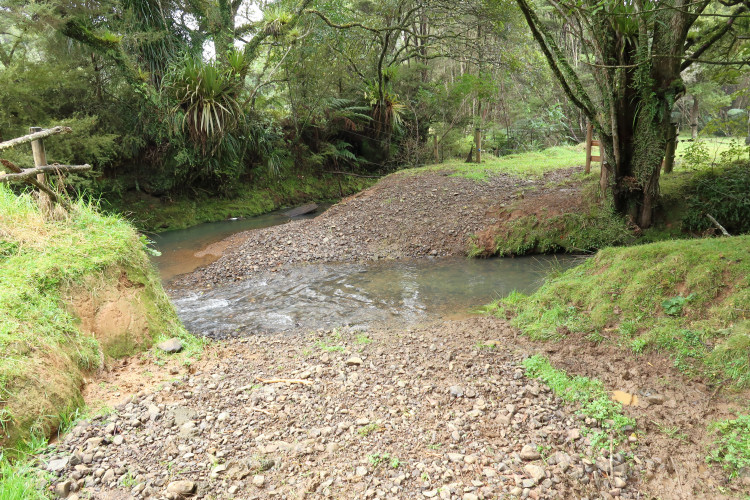 In the water, just before the stream disappears from view, is a large, partially-submerged log. There must have been a lot of water flowing through here to shift it from where it had been sitting for some time, lodged in the bottom of the bank here on the left.

The shape of the corner and the crossing haven't changed too much, thankfully. It's hard to tell what a lot of water might do to a crossing or any part of a stream's course to which one makes a change.

I decided it was time to revamp my grazing calculation spreadsheet, since it doesn't quite work the way I intend. I spent about three hours thinking intently about how to alter the formulae that show me how much there is to eat in each paddock as the cows graze and then provide a good indication of the best time to move them on. I've found it useful in other years and I think I can make it better.

I went to the hospital this morning for a couple of routine tests. The blood-test lab is on the top floor, so there's no avoiding going right through the place to get to it and I had to wait for a little while. There had on other visits been a tent out the front, inside which everyone about to enter the building was asked some screening questions, to try to stop people with cold or 'flu symptoms going in. But that's all gone and anyone, in the middle of winter, can now come and go as they please.

While I sat in one of the waiting areas a woman across from me pulled her mask down, breathed deeply twice, coughed, then said, "just taking a breather." I, having read anything scientific coming my way, have formed the firm opinion that wearing masks during a pandemic is a sensible idea, for one's own safety but primarily for the safety of everyone else, especially during winter, when people are most likely to have colds, 'flu, Covid. Sometimes the infected person is not very unwell; but the person who gets it from them might become so. Some might even die! People can be idiots. 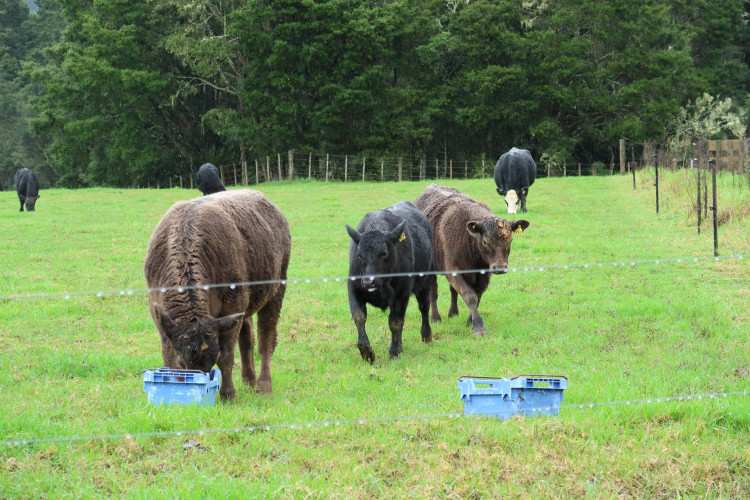 I brought some Magnesium Oxide in molasses for Glia's calf, to see if it would help him feel more settled.

It didn't appear to have made much difference later but any little thing might help; along with time and getting more used to his new life without his mother. 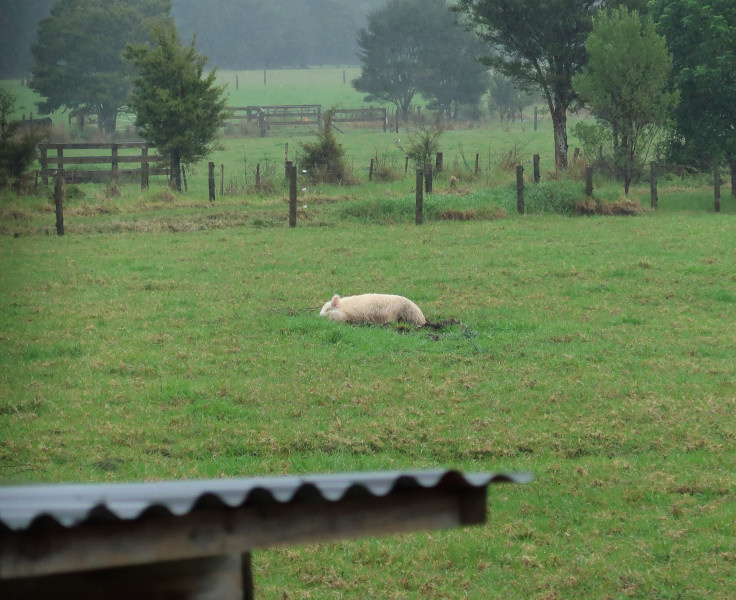 It rained some more and out in the paddock, in the heavy rain, lay Al. I thought he'd laid down and died there!

Maybe the ground, where he'd dug it up, was warm?

Stephan and I dug a lot of wet stuff out of his little hut and replaced it with drier leaves and some hay, in case that's what had made him vacate his shelter. There's more rain coming.

Overnight there was another 76 mm of rain. We've now had 270 mm; July's average here is 213 mm, so we're already 25% over the average and we're not quite half-way through the month. It was extraordinarily warm last night too, 18°C at midnight when I went to bed. It came down to 11° during the early hours but it's still unseasonably warm. 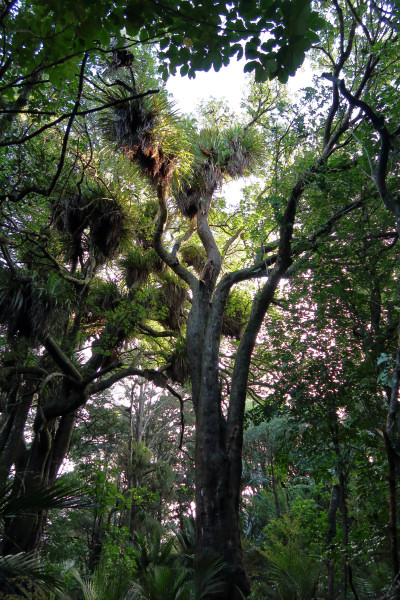 We both, from different places, heard a huge crash from the bush reserve next to the House paddock.

From high up in one of the huge Pūriri an enormous branch had crashed to the ground. 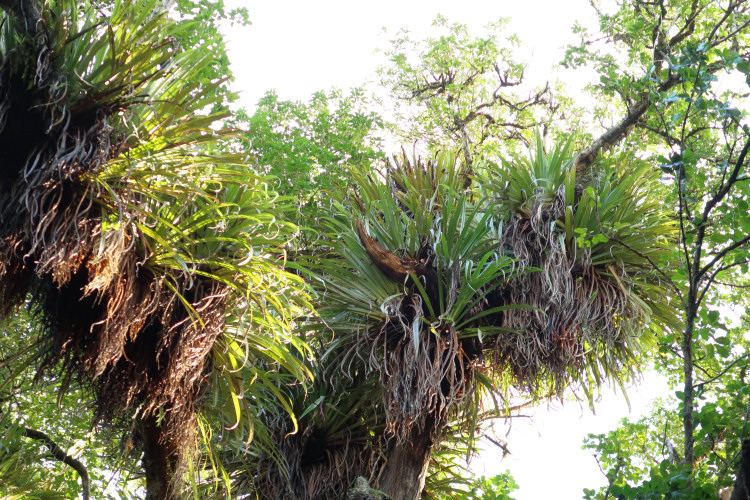 I suspect that this very high branch had broken because of the increased weight of the epiphytic plants as they filled with water... 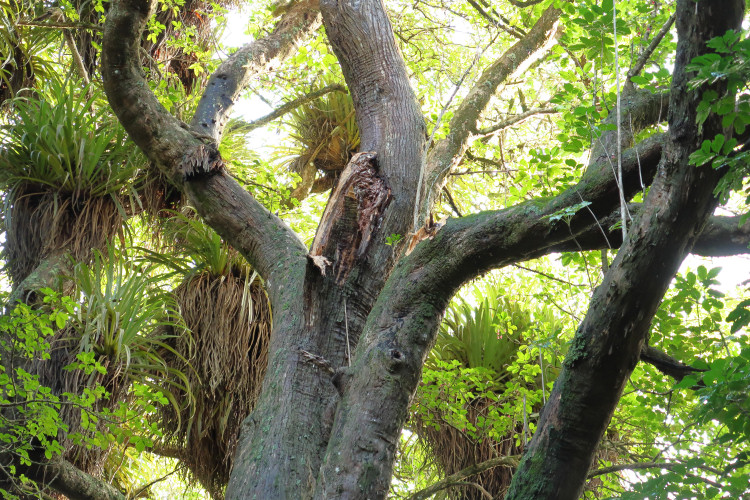 ... fallen onto the branch below, and brought the whole lot down. 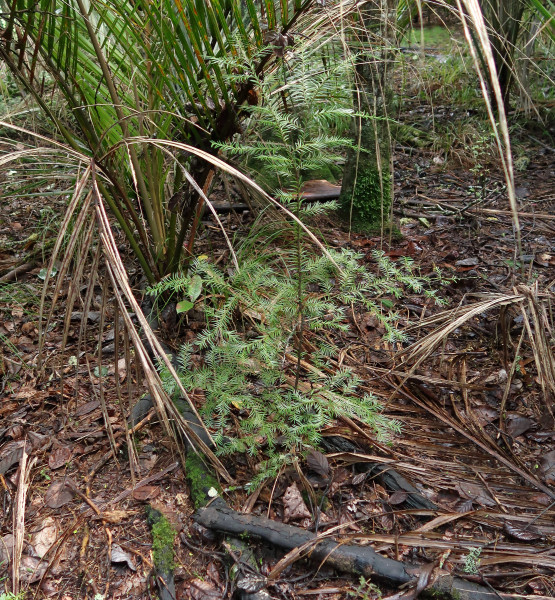 We didn't stand around under any of those trees!

But I did look around to find this little sapling, a tree I've been watching for some years since I first noticed it and surrounded it with branches to mark its position. It was harder to find than I expected because so many other plants have grown up since I was last here.

It is a Miro, probably a seedling from the mature tree a few metres away. 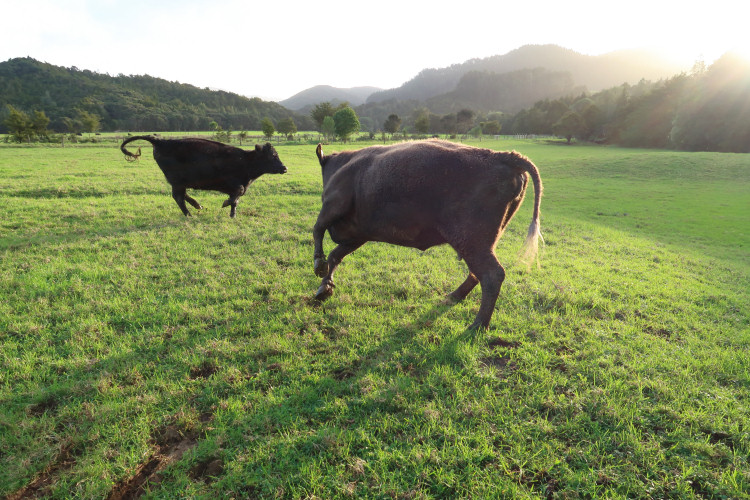 Walking back to the house, Al dashed around us and then the two cows in the paddock started excitedly leaping about: this is lame 812, with the sore right stifle joint, who limps around and has to be kept in flat paddocks, yet here she was jumping and twisting and having a marvellous lot of fun.

Some months ago I arranged for my Aunt to be sent a DNA test kit, eventually got someone to help her do what was necessary and today, at last, the results have come through. They don't tell me anything unexpected but I look forward to exploring the various matches with our relatives, since her test will yield some mine did not. I am very grateful to her for agreeing to participate!

I went out to check on the R2 heifers, spent some time quietly with them, managed to scratch a couple of tails I'd not been allowed to touch before: heifers 912 and 202 are becoming quieter.

I let them follow me along the lane from the Big Back, heading for the Pines. While walking I was listening to a science commentator on the radio, talking about WIMPs: Weakly Interactive Massive Particles. It was a most interesting and amusing interview. 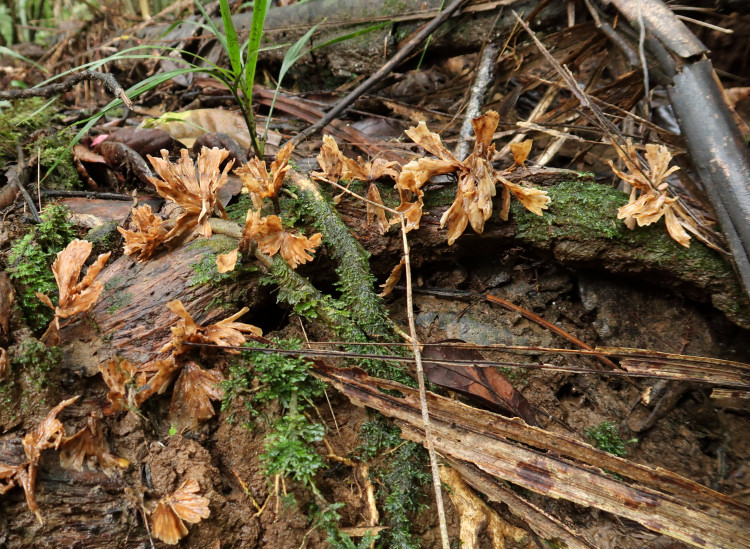 I went back to the fungi I photographed last month to see how they looked now.

I'm glad I saw them earlier. 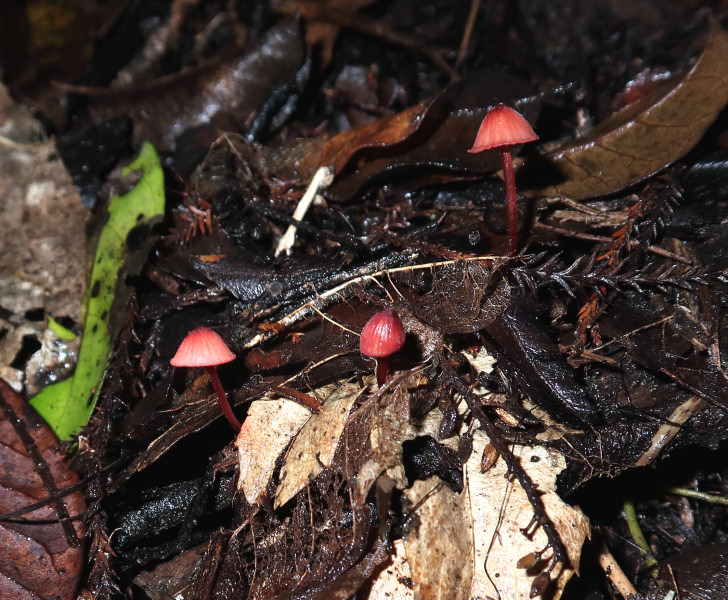 Little red caps were growing amongst some of the leaf litter. 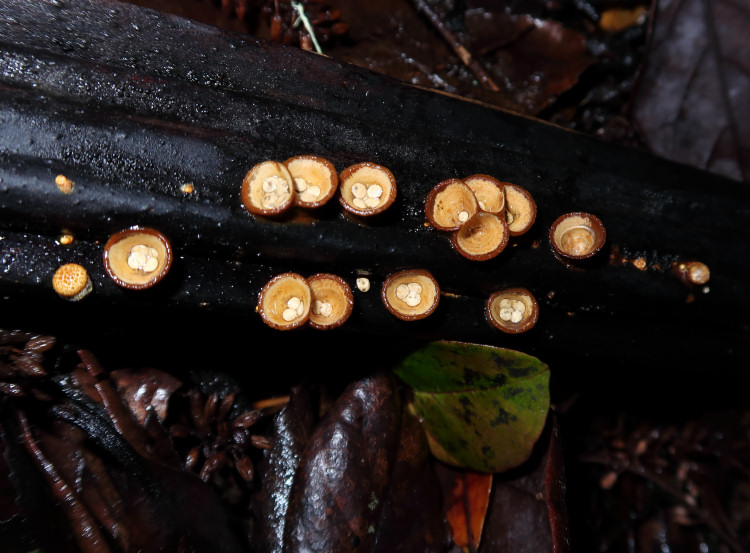 And I always like these things, the little bowls with tiny biscuits in them. They often grow on fallen tree-fern frond stalks. 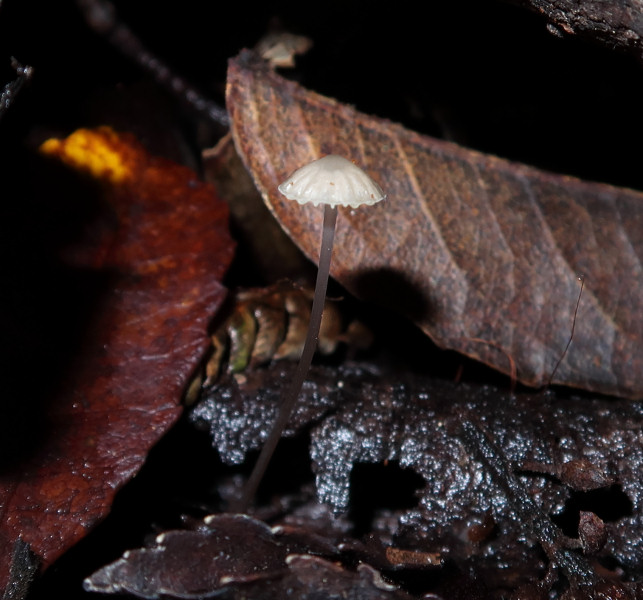 There are so many tiny, beautiful things. 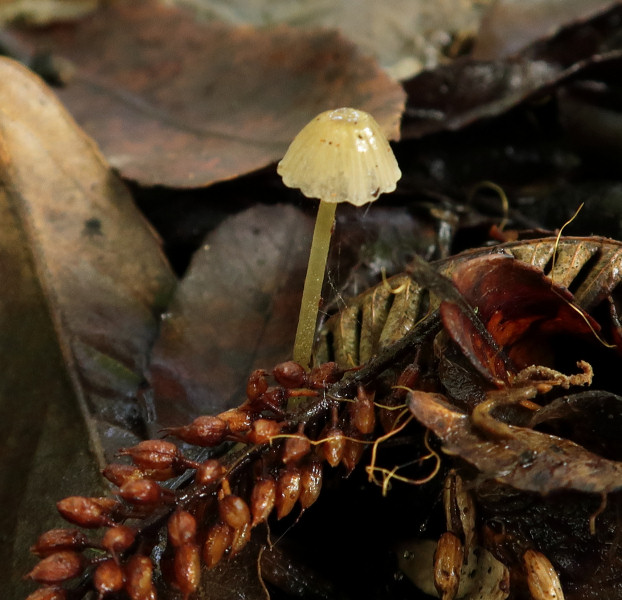 In many different colours. 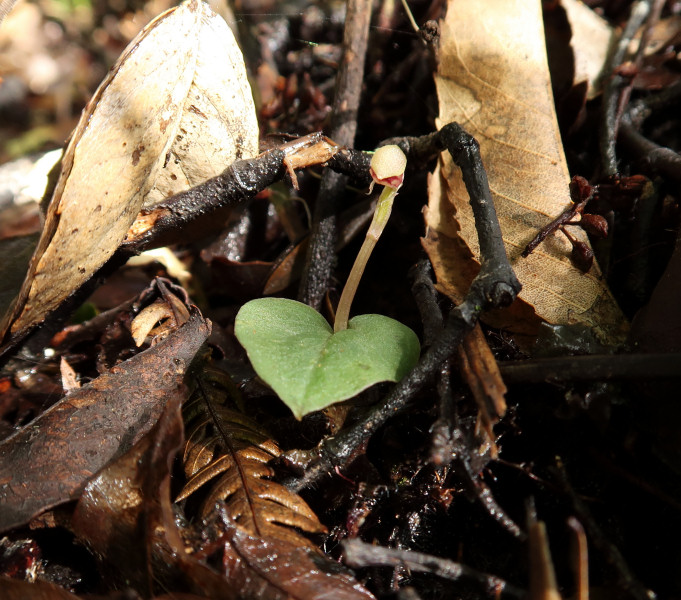 And the orchid was just blooming, probably still yet to grow in size. It's always a pleasure to find they've not been eaten. A pleasure to find them at all, actually, since they're tiny and the movement of a single leaf on the ground could easily cover a plant like this. 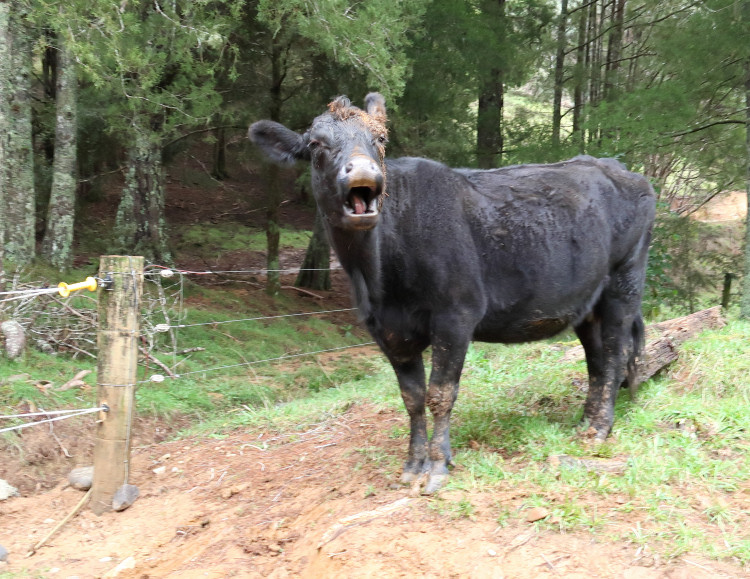 I moved the thin young cows out past the Pines and 865 spent some minutes fighting a small tree and the clay bank beside the Pines gateway, a demonstration for one of the heifers standing watching her. Here she was, bellowing excitedly, before galloping off after the others in her little mob.

Stephan took over all outside duties while I stayed inside, kept warm, did as little as possible while I waited to see how whatever bug I'd picked up at the hospital developed.

The telephone was off again, so I had to work out some inventive ways to cancel an appointment for tomorrow. I tried ordering some RATs (Covid-19 Rapid Antigen Tests) on-line but either had to have a cellphone for a confirmation code, or to phone an 0800 number... which I couldn't do without a working phone. I think the people who design those systems have no idea that such problems occur outside the cities.

Jane gave Stephan some RATs so I could use one, see if I have the dreaded lurgi. The RAT said no. I kept on resting.