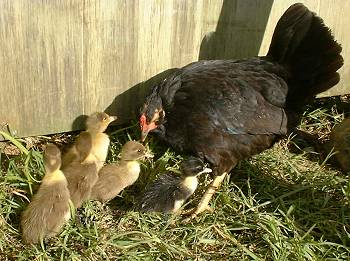 Five new ducklings, from eggs I set four weeks ago.  I wondered if one of the Muscovy ducks might have been laying in the nest and also whether the young Muscovy drake might have sired any of these babies, but as their hatching was right on time, I think they're most likely ducks, rather than Muscovy-duck hybrids.
(Muscovy "ducks" are neither ducks nor geese and can apparently produce offspring with either geese or ducks, but those 'lings won't themselves be fertile.)
The eggs were laid by the ducks which lay the eggs Stephan sells.  Some of the ducks are geriatric, so no longer laying, but still nice to have around, and they'll live out their lives and gradually disappear.  We need some young birds to replace those ancient birds and I haven't hatched any ducklings for around three years now. 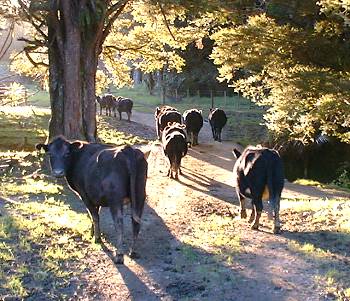 I had a very frustrating time last week, after bringing the cows down from the hill over the road to the yards for their overdue copper injections.  I did a few, then hit problems, in that I just couldn't get the stuff into any more of them!  The needle would go into the right part of the neck, but the plunger on the injector gun wouldn't move!  I did all the young stock the other day and usually have no difficulty, except with the odd cow, like Queenly, who seems to have exceptionally thick skin.
Today I brought them back and continued the job with shorter needles and trying a slightly different angle of entry through the skin.  Much better.
I used to inject with the short needles and had no problems except with Queenly, and must have suffered some memory aberration (again) which led me to use the longer needles on them all.  The copper solution is supposed to be deposited just under the skin, so with a long needle at a good angle along the neck, I was probably succeeding in getting it into the right place, but it obviously wasn't as reliable a method as the way I usually do it.

The picture is a bit dark, but that's Fuzzy 357 at the back, as usual, as the cows head out across the bridge to some new grass.
When they reached the end of the lane out on the flats, I let 37 of them into the paddocks the bulls have been in and took the three youngest, Abigail and the other two who calved as two-year-olds last year, back down to join the three little stud bulls on much lusher feed.  I looked after those three heifers pretty well last year, keeping them with Ivy, who needed to be on lots of grass, but since their calves were weaned, all three have gone back a bit in condition.  I worked them pretty hard in calving them as "teenagers" while they themselves were still growing, so they need a bit of extra care still.

Yesterday I put the ducklings and their hen mother into a small cage, so that they could be fed without molestation by all the other chickens and ducks around the garden.  Late last evening, I realised that the hen had jumped up to roost on the perch inside the cage, leaving the ducklings to huddle on the ground!  I caught the ducklings and they spent the night in a box beside the fire instead.  Here they are again this morning, enjoying their roasting-dish bath.

Sometimes cows can be extremely frustrating and I can completely understand why people use dogs to make them move where they want them to!  My cows spent all day in an almost grassless paddock, making it even barer, because they simply wouldn't go out the gate this morning when I tried to move them.  Silly animals. 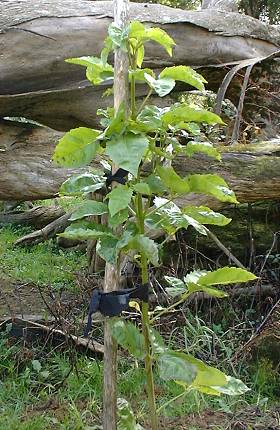 Stephan and I suddenly got all enthusiastic and went out and planted 21 native trees and plants.  There are eight Puriri, a Rimu, a Tecomanthe speciosa (there's only one known plant in the wild, although now many times propagated and growing in gardens) which was unfortunately heavily pruned by Arran 20 the other day, a Pohutukawa, seven flaxes, a Forest Cabbage tree (Ti Ngahere - Cordyline banksii) and an ordinary one (Ti Kouka - Cordyline australis).

We planted them all then went around with a glass of wine each and toasted their ongoing health.  Most of them I've grown myself from seed or small seedlings out of the bush on the farm, so it's very satisfying to plant them where we will be able to watch them grow.  I now have a number of very usefully large plant pots into which to plant some of the other fast-growing seedlings in my greenhouse.

Later in the evening the air became very cold, so I went out and put bags over the top of all the Puriri trees, since they're very frost-tender.

The tree pictured is planted beside the now-dead trunk of the Puriri which fell down about three years ago in the middle of the night.

The last three days have been beautifully clear and fine, with sparkling blue skies and lovely warmth in the sunshine.  These sorts of weather breaks seem to have been occurring more often in the winters of the last two or three years and are very, very welcome! 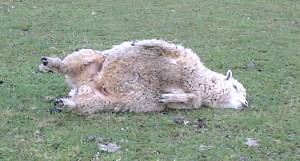 It's this time of the year again!  The ewes are fairly well covered with wool, and now only six weeks away from the start of lambing, so are prone to being cast like this.

I walked over and tipped her gently back over onto her feet and she trotted off in a slightly wobbly manner.  Then we took them all to the yards so we could select some out to take to the Peria sale tomorrow. 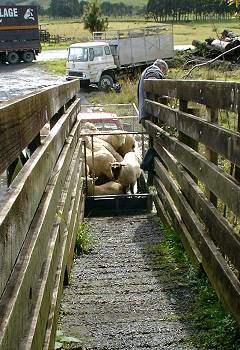 We managed to get 11 lambs and three ewes (well, we thought they were all ewes, until we put them in the pen at the sale and realised one was a wether!) into the cage on the back of the ute and went off to Peria.

There were a few people there and we sold the three adults, but we'd been doing a bit of thinking about what paddocks we had available, especially if we got rid of the ram, and decided that unless the bids for the lambs were pretty good, we'd just take them home with us again.  Lamb prices at the works at this time of the year are better than when we sent the others several months ago, so we didn't want to quit them for less than we considered they were worth.

We popped them all back onto the ute and came home again, gave them all a drench while they were still in the cage, then drove up the road to our inconvenient Road Flat paddock and left them there.  The Road Flat paddock hasn't had sheep in it for a couple of years or more, so the sheep parasite levels could be quite low by now, and 11 little lambs in a big paddock should do pretty well for a while.

Today my first ever stud bull sale was completed!  Yesterday afternoon we put the secondary button tags in the ears of Virago Blyth 19 AB (at left below) and Virago Frederick 22 (right) and kept them near the yards, ready to leave the farm this morning. 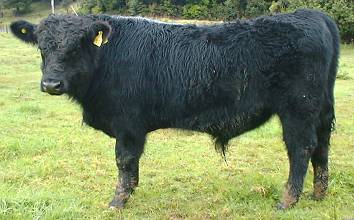 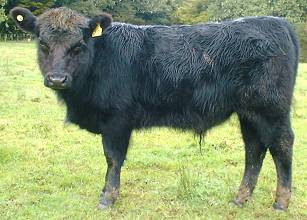 Blyth is the son of Virago Quean 03 and Frederick's mother was Taurikura Flower 682, who dropped him on the ground and ran away, which is why he's a far smaller animal than Blyth.  Frederick may never reach his genetic potential, but that of course won't prevent him from passing it on to his offspring.

Jeff and Helen approached us about the bulls after the Women in Agribusiness field day we had here in February, because they wanted a couple of "maternal sires", i.e. bulls which are best used to sire heifers which will be kept as breeding cows.  They have visited a couple of times over the last few months to have a look at the bulls and see how they have been developing and wanted to take them away now, to become accustomed to their new home and keepers before it is time for them to begin work this spring/summer.

Jeff brought a double horse-float to collect the bulls, backed it up to a gateway in our loading race.  Jeff did quite a bit of "bull whispering", getting both bulls used to his close proximity, scratching them in all the places they really liked - Blyth has been quiet enough to stroke in the paddock and lanes for all his life, so he was an easy candidate.  It took us about an hour of coaxing with the help of a container of Molasses, to get them both onto the float and standing quietly there.

I was concentrating far too hard on what we were doing to distract myself with taking photographs. 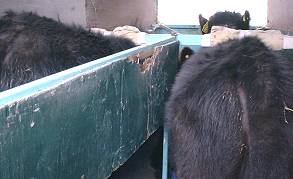 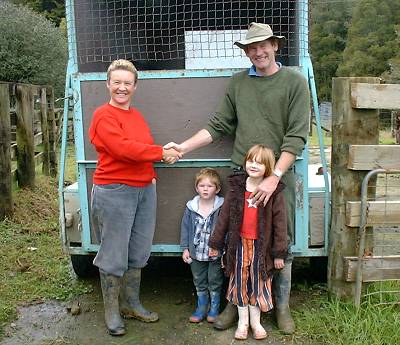 We exchanged all the necessary pieces of paper including the TB status declaration which is required with every animal transfer, Stephan took our photograph, with Mary-Jane and Oscar, and away they went. 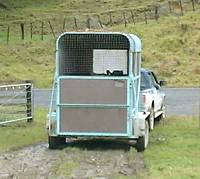 Jeff left us a message later saying that the bulls had managed to turn around about 1km down the road from our place, so they travelled all the way home with their noses at the backing gate of the float, which would have been rather worrying at the time since they might have attempted to jump out the back, but otherwise the trip went very well.

Stephan and I went off to town for the Ceremonial Cheque Depositing, then on a whim, went on for a celebratory fine beer toast with my beloved God-parents, Hack and Marj.  They might well take some credit for my obsession with cows, since their Jersey dairy cows were the first I ever met, as a very small child.  On our way home, we visited the Orana Restaurant for a very nice light meal, to finish our special day.