We came home from our trip.  Ms Duck was waiting on the driveway as we drove in, very pleased to see us.  We'd wondered if she'd stay around here in our absence - obviously Grant was tolerable company for her.

The first thing to do, after a few days away, is to check all is well with everyone on the farm.  Grant had made a distressed phone call to us when we were wandering through a shopping mall in Auckland on Tuesday, to say that the bulls had run away.  They'd somehow broken an electric wire which was keeping them in their paddock and he'd managed to bring the two big boys back (very dangerously by the sound of it!), but had been unable to find Crispin and his mate.

We went out to the back of the farm, wondering what we might find going on!  All proved to be just fine.  The two boys were just standing around under some trees, in spite of there being one fairly hot heifer in the mob in the next paddock.

We went to buy a new ram.  We've been making enquiries for a few weeks and have been well aware that most farmers have already put their rams out with their ewes, but since we don't want to start lambing much before the beginning of September, we weren't too worried about the delay (except that there aren't many rams around to be had, since most have gone to start work).

This guy is a very well grown last-year's lamb.  Since he'll only be required to do his thing with about 20 ewes, we think he'll handle it ok.  He's a purebred (we're told) Suffolk.

We've previously just bred with Romney rams, but since we sent so many lambs off to the works at the end of last year, we thought we might as well look at a more meaty breed.  It'll be fun (assuming all goes according to plan) to have a lot of little Minty type lambs running around.  Minty's lambs will be even darker than she was when she first arrived here, since Minty is only half Suffolk.  (Minty and the other sheep can be found on the Sheep page.)

I was walking this afternoon and this large insect whirred up off the ground in front of me and landed some distance away.  It was very hard to see, even though I watched carefully where it had landed. 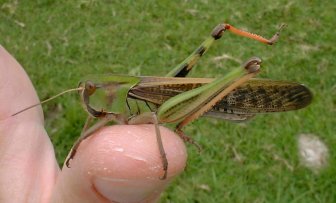 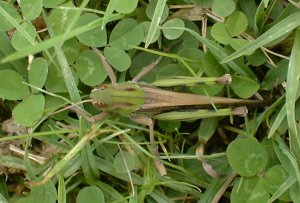 I believe it's a locust.  I've seen them sometimes during the summer months, but never in large numbers.

We'd been getting heavy rain warnings from the Metservice office for a couple of days and the rain started coming down as predicted.  We often get warnings and no rain, or lots of rain and floods with no prior warnings, but sometimes they get it right and so we always take heed.

The river came up and over our bridge by about 10am and stayed over until nearly 6pm.  The warning remained in place for much more rain over the next 24 hours.

Between about 11pm and 6am on Friday we had a series of torrential downpours.  There wasn't any wind with it, fortunately, just an unbelievable amount of rain.

Being woken early by the noise of the rain crashing down on our roof, we watched as dawn broke and the river levels began to rise.  As soon as the downpour finished, just after 7am, we went out to have a look around and make sure nothing was in danger of floating away. 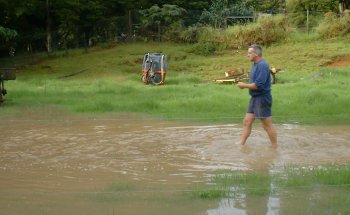 It is likely there's a new gravel beach somewhere downstream, made from all the driveways in the valley! 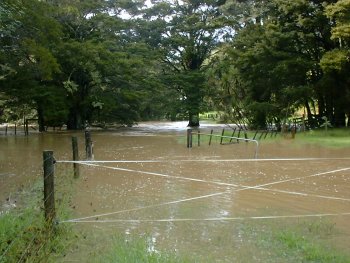 This is as high as I've seen the water in the last five or so years!  We're fortunate that most of our land is high enough to be out of the way of most of the flooding.  The photo above looks out across where our bridge usually crosses the river, rather than the river crossing the bridge! 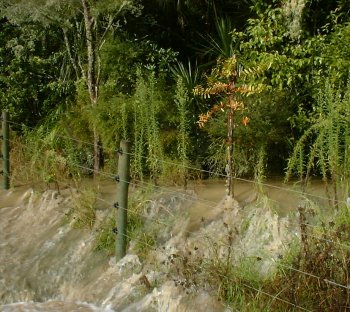 The Taheke stream, which runs down through the farm, began to recede a little, so we had ponds in the midst of grass, rather than just little grassy islands in the swirling water.  But then the Waikawa River, which runs down through Diggers Valley, began to rise more quickly, until it came over the bank on our corner.  We built this bank up several years ago, after the river had begun to spill over during even quite minor floods, and we've only had water over here once or twice since.  We're gradually planting things on it, and the roots of the large mature trees on the corner appear to have already extended through most of the new earth we put here, holding the whole lot together very successfully.

By 11.30am we were able to carefully cross the bridge.  We'd never have done this in the days before we concreted the bridge, since we could never tell how much of the surface would have been carried away by the river each time it went over.  Now the bridge is a more solid structure, we know where it is under the water. 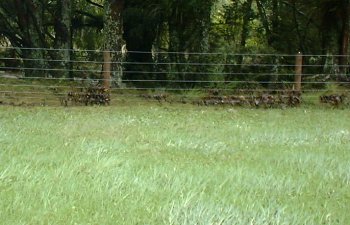 Stephan's quite glad he didn't put battens on this new piece of fence, since they would have caused it to trap a lot more of what was floating in the floodwaters, which would have put a lot of pressure on the posts.  We think we may just leave it unbattened, since floods of this level seem to be happening with greater frequency than in the past. 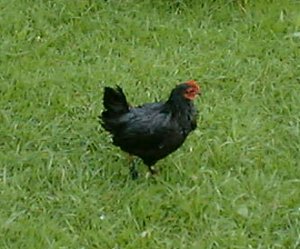 If you make a nest in the grass to incubate your eggs, then when it rains you're going to get quite wet, especially when a great deal of it falls on you very quickly!

All in all we survived probably much better than we sometimes do in floods.  All the animals were in safe paddocks, we've been much more careful recently about leaving things in reach of the rivers and we had no major leaks in our buildings.  Our position in this valley means that our floods come and go quite quickly and are relatively locally sourced, so we usually have a good indication of the likelihood of the rivers flooding, from the amount of rain we get.

Most of the local area had a similar amount of rain, which for some people caused serious problems in terms of animal safety and flooding through unexpected areas.  A number of people were evacuated from their homes in town, since the water from here and a couple of other major catchment areas all flows through Kaitaia.  Whilst we could get over our river and along to the main road quite quickly after the waters receded here, we couldn't get into Kaitaia until the next day, since the road remained flooded for many hours.