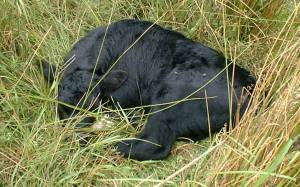 Here on Saturday, is the last calf born so far, on her third-or-so day of "lying in".  New calves seem to sleep with their mums, but then the cow feeds her calf first thing in the morning and then "stashes" it somewhere and the calf will stay there, even if one tries to get it to move, until the next feeding time.  This goes on for two or three days and then the calf gets up and out with the herd, although usually near the other calves, often in the "nursery" with an "auntie" near by, who is often the most recently calved cow.  It's lovely to be farming in such a way that the cattle can express their natural behaviour with their young, at least until we intervene in six months or so and remove their babes from them.

We had planned, this year, to "put the ram out" with the ewes on or about the 1st of April, so that lambing would begin around the 1st of September this year.  However, the ram wasn't going to wait.  Stephan discovered him this afternoon (Sunday) in the chickens' paddock, which is across the river from the paddock in which said ram was supposed to be staying.  He was obviously following an interesting scent on the wind and we figured (on past form) that nothing would stop him, until he found the source.  Since we prefer to control who gets to "get it on" with him, we brought the sheep in (using the usual bucket of maize mustering method) ... 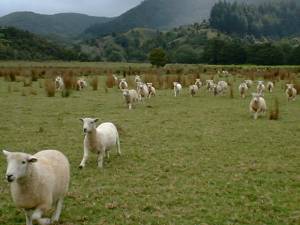 ... separated the lambs and other non-breeders off, and let the big boy in to do his best! 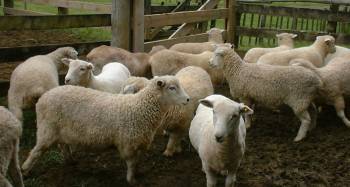 That's him over in the middle-back of the picture, sniffing the end of a ewe.  It didn't take him long to work out exactly which ones he was most interested in and to single them out for his special attention... 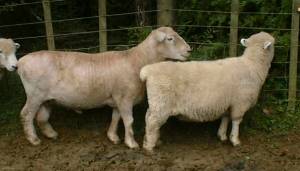 No!  Of course we're not going to show you that bit!

We saw this huge creature on Sunday afternoon, just cruising slowly from side to side, up the river...

... heading for the swimming hole and the next unsuspecting swimming victim!!!

I don't like farming today.  After three and a half years of raising and caring for a so-far unproductive heifer, and being too soft to send her off to the works when she wasn't pregnant the first time she should have been, and waiting patiently for the last nine months, and impatiently for the last few days, she now has a dead calf!  BUGGER!
I don't know why, except that she might have had some trouble birthing it since she's so fat, or it could have been any number of other reasons.  I could kick myself for not being there at the right moment, but then I know I can't really be there at all the right moments, and have to remember that I am there at some of the right ones.  I'm not sure how long it had been out by the time I got there, she wasn't too keen on letting me close enough to feel how cold it was.  I've left her to "grieve", which basically means waiting until she realises her baby just isn't doing anything, and goes off to get on with her life (what she has left of it!).  Another hole to dig - lucky the tractor is coming home today!